RPF PREMIUM MEMBER
Less germane to the Tolstoy, but brief sidebar. One of them...

...is in Spacedock in TSFS (to the left of the Enterprise, on the far side of the docking pylon): 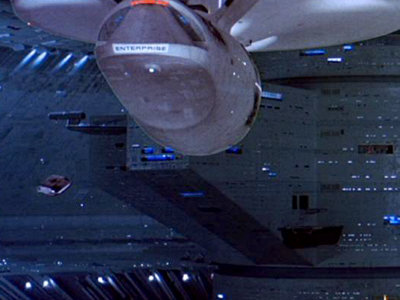 So I treat that as its nearly-canon appearance, and also an indicator of what era tech it has. With a little judicious cleanup, it's a good contender for Horizon or Archon or Baton Rouge or Valley Forge classes.

...is only actually seen onscreen in "Unification", which used alternate composites from the same shooting session as "BoBW": 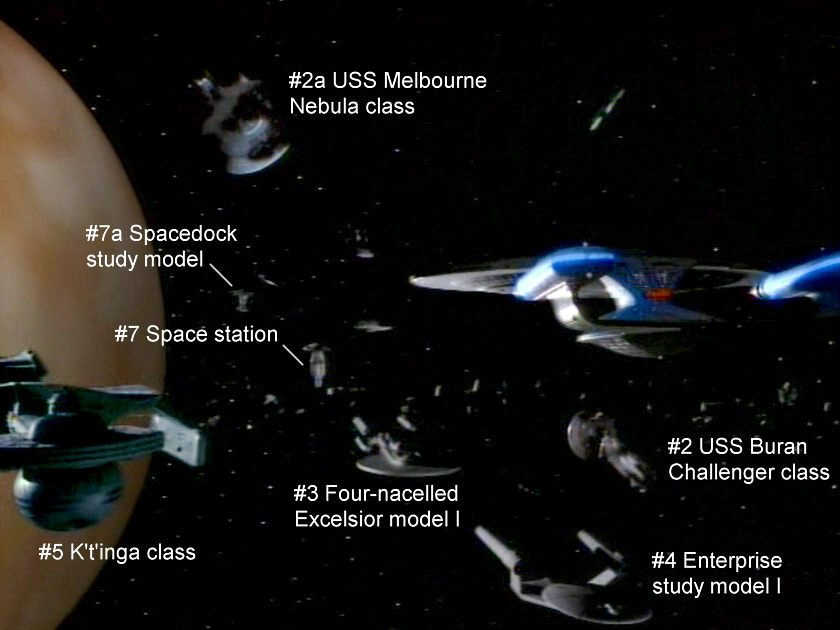 I have personally turned it into my contender for the Apollo class, which I have being commissioned in a bit of a hurry after the Tomed Incident, when it was assumed that was a precursor to increased aggressiveness from the Romulans. Very little cleanup, and some Ambassador style nacelle endcaps, and it's good to go.

So both, since they've appeared onscreen -- albeit blurry and at a distance -- I treat as very close to their final appearance. As for the actual finished Enterprise in the actual finished movie? I like to think wiser heads would have prevailed and gone with something like the second study model, above, but adjusted to a bit more TOS-y appearance -- red nacelle domes, a more cylindrical secondary hull bulking out the wedge, the bridge back at center top (with that saucer blister remaining a battle bridge or similar). I've seen some fandom conjecture, but it's all over the place. 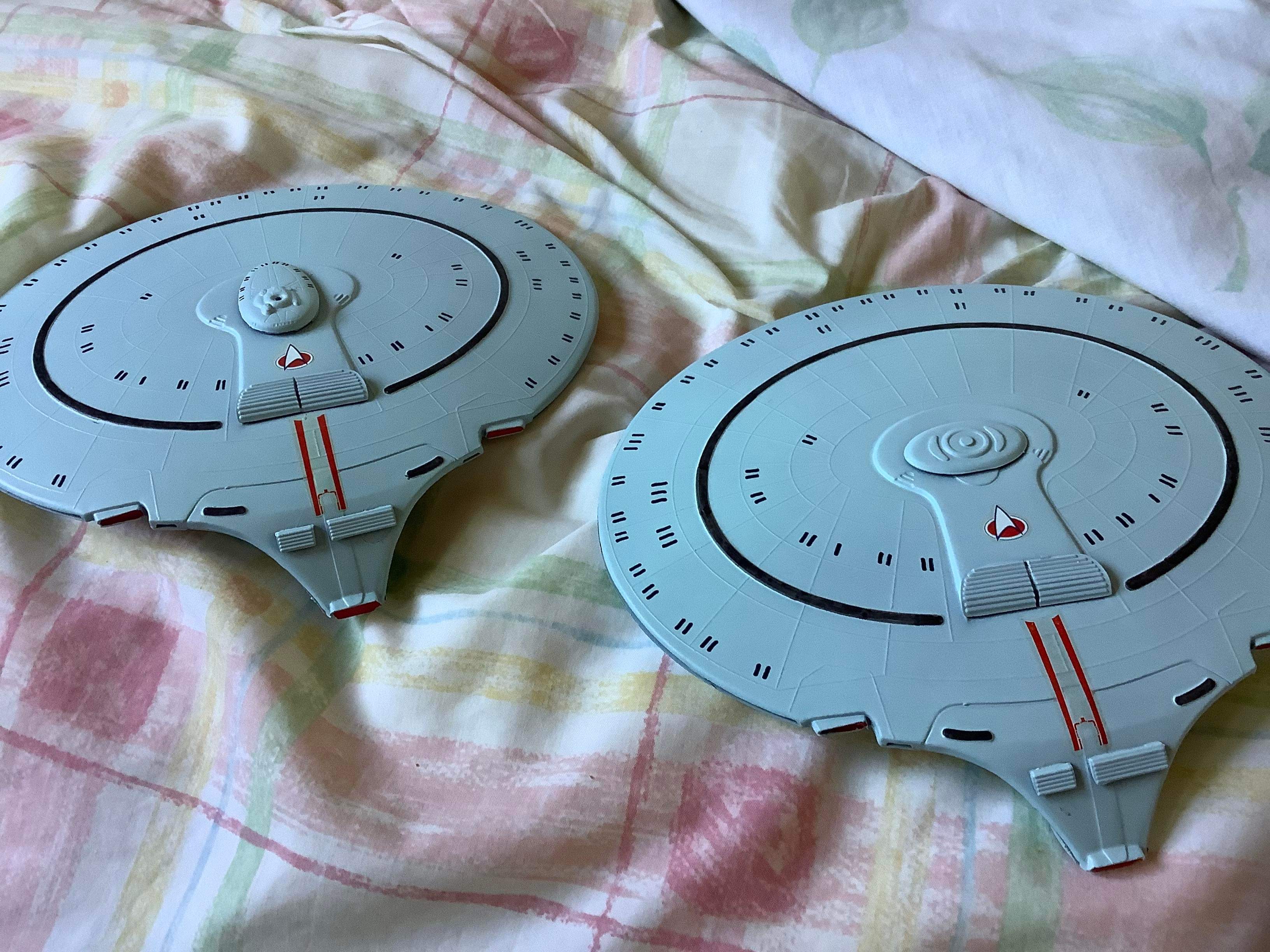 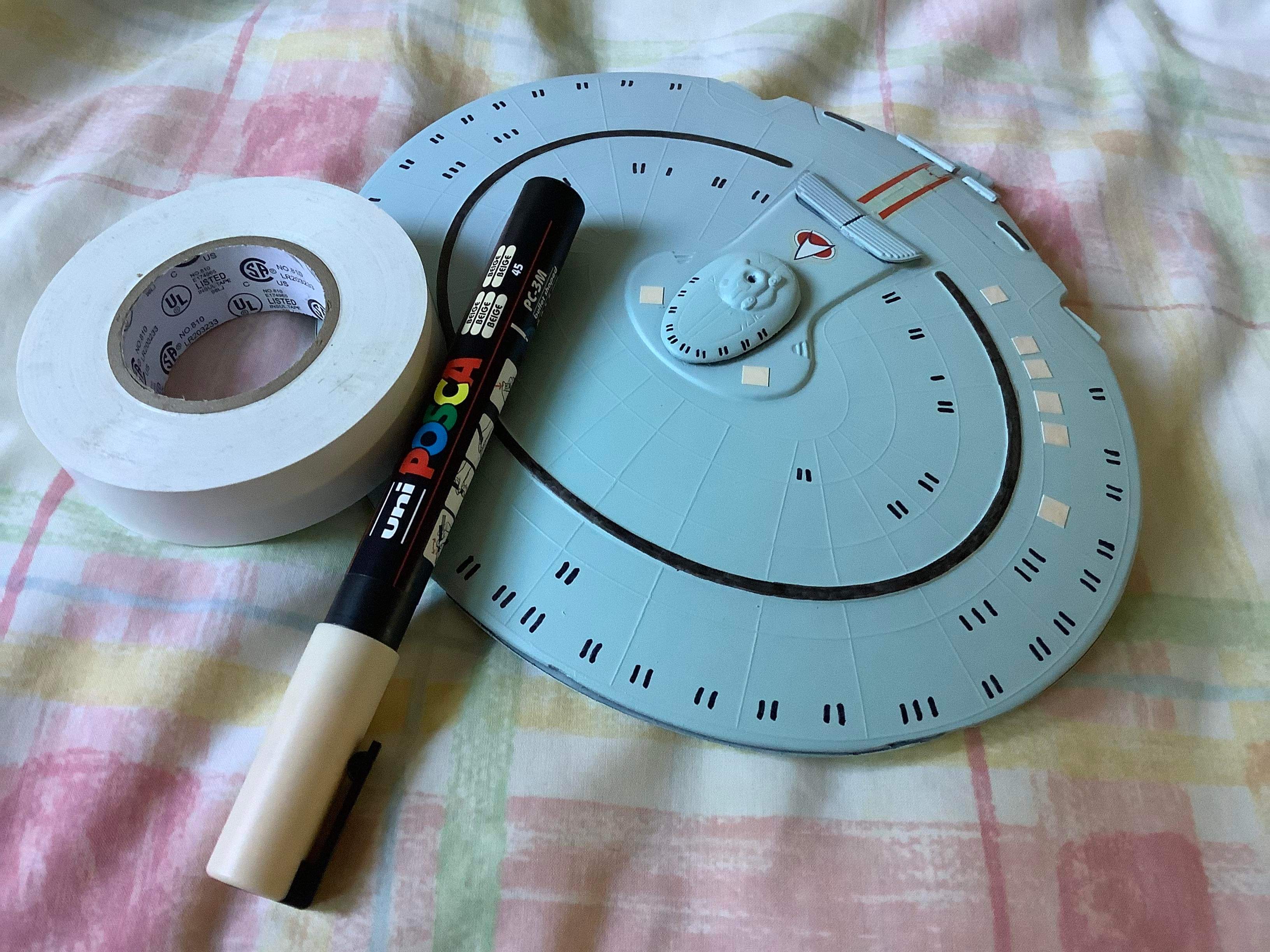 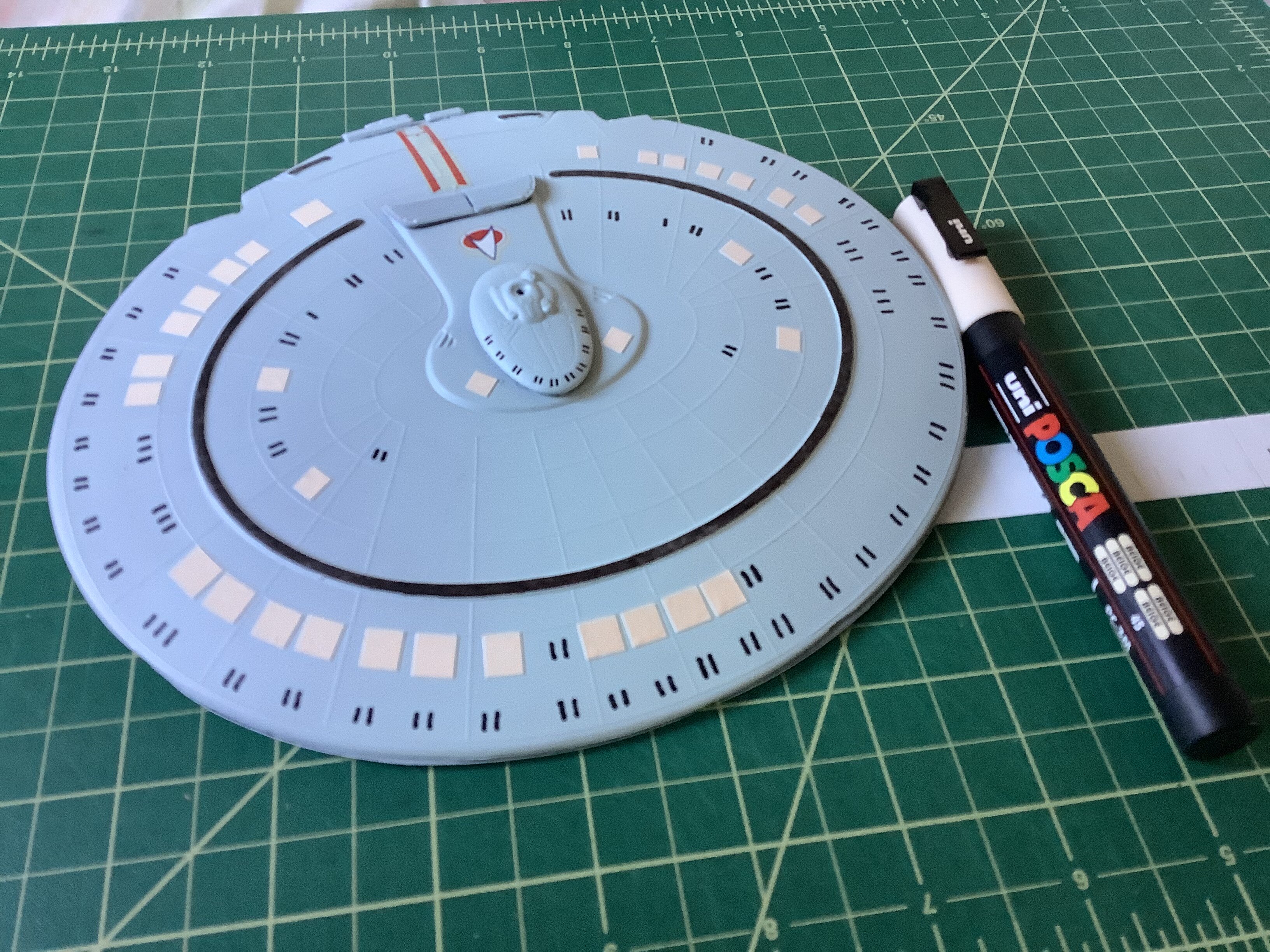 Update… decided to just paint all the lifeboats. Nacelle glued to the first saucer. 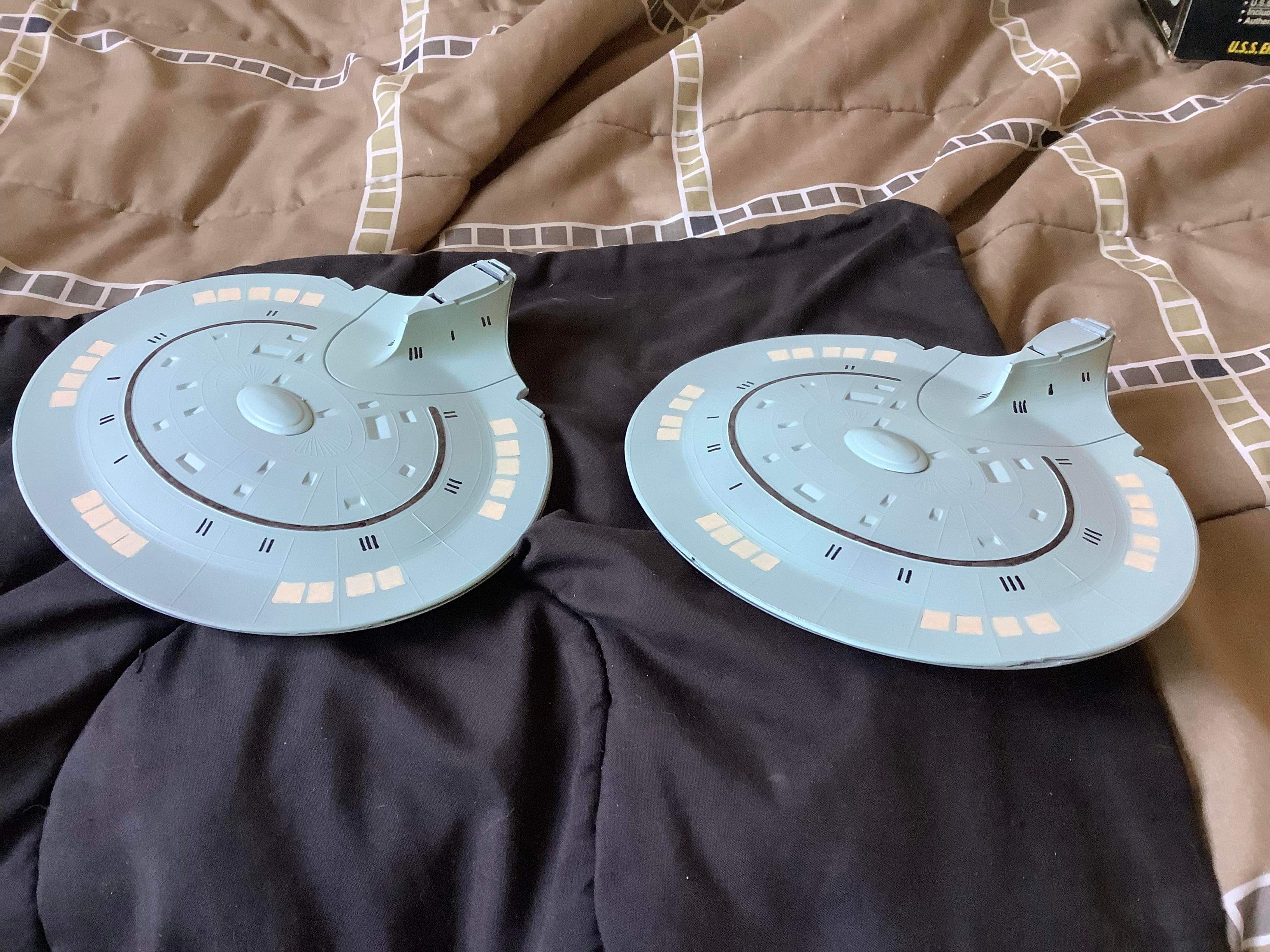 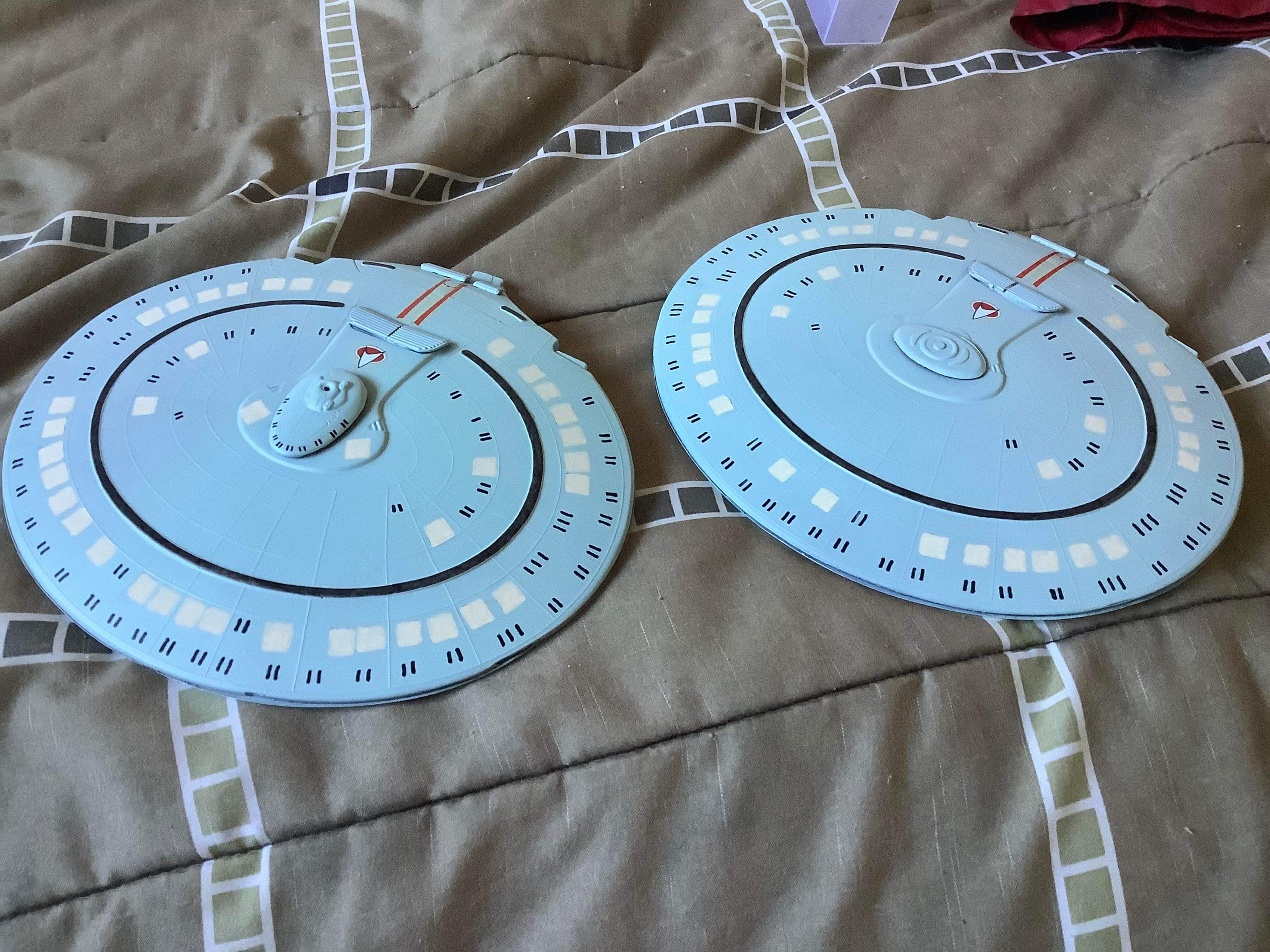 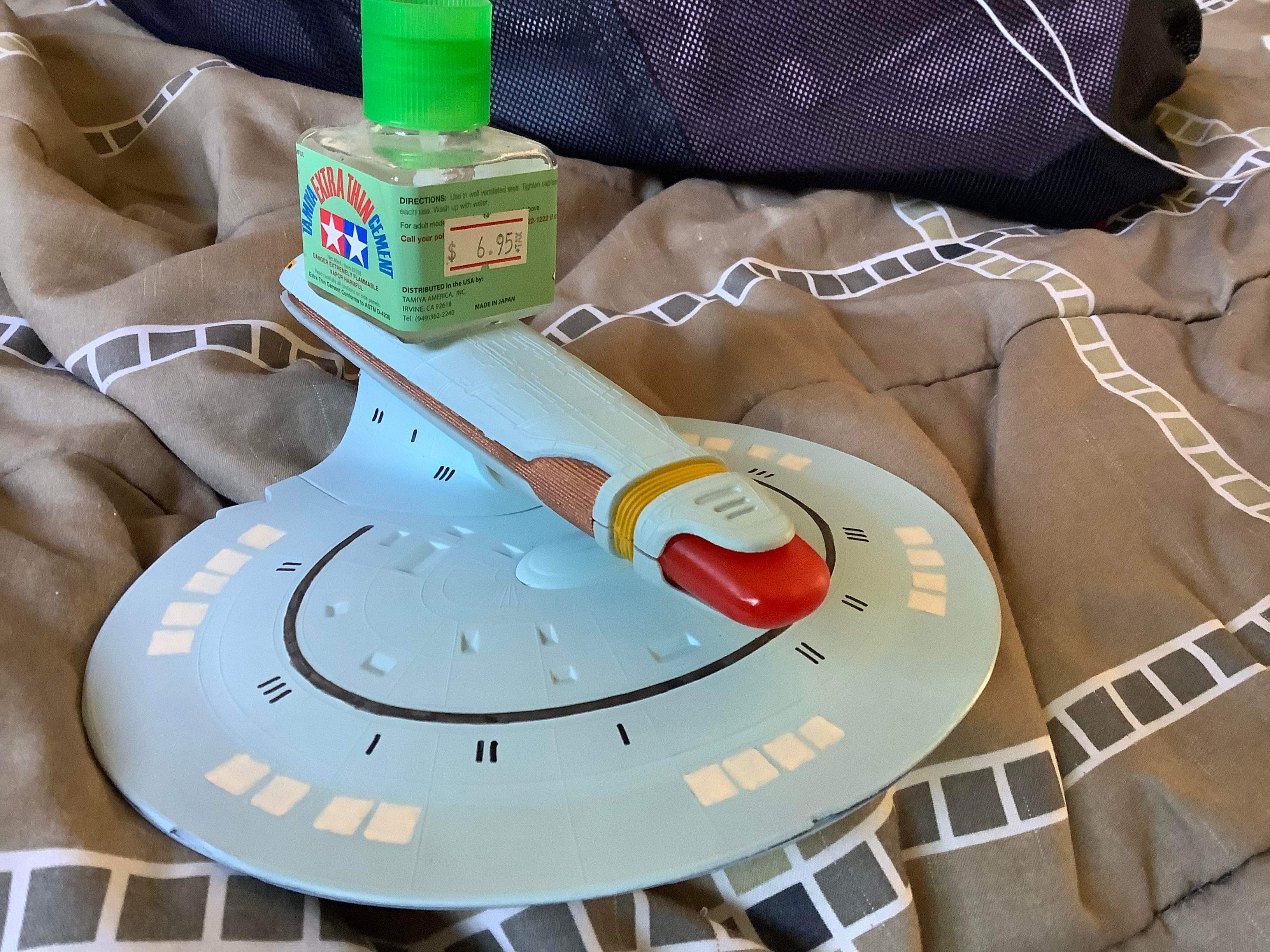 Finally… all I have to do is slap the registry on it, and I’ll be done with it. Gluing the second saucer to the nacelle was a right pain in the arse. I’m hoping and praying this thing gets to the client in one piece. Pretty much guaranteed I’ll never make another one of these. 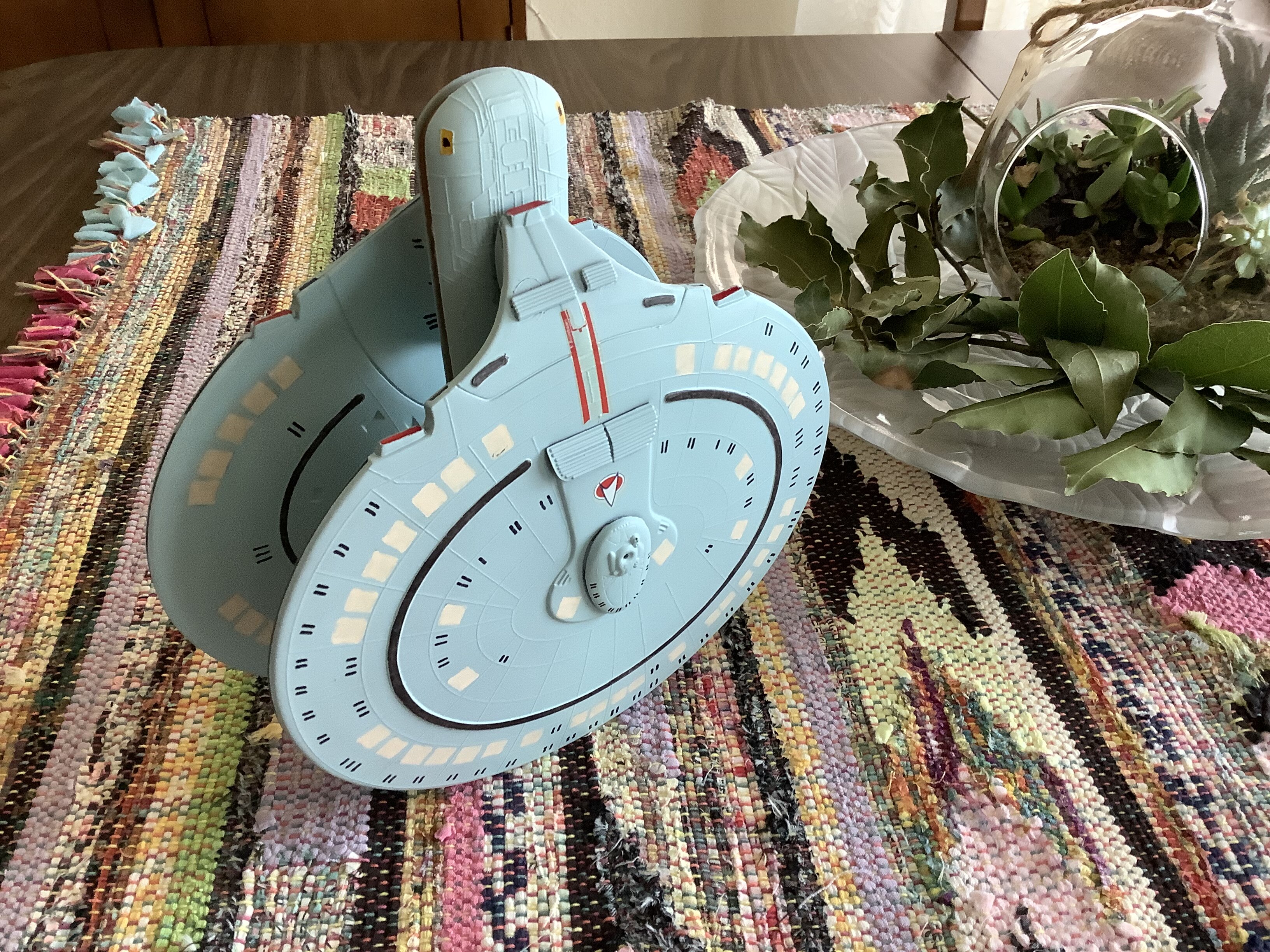 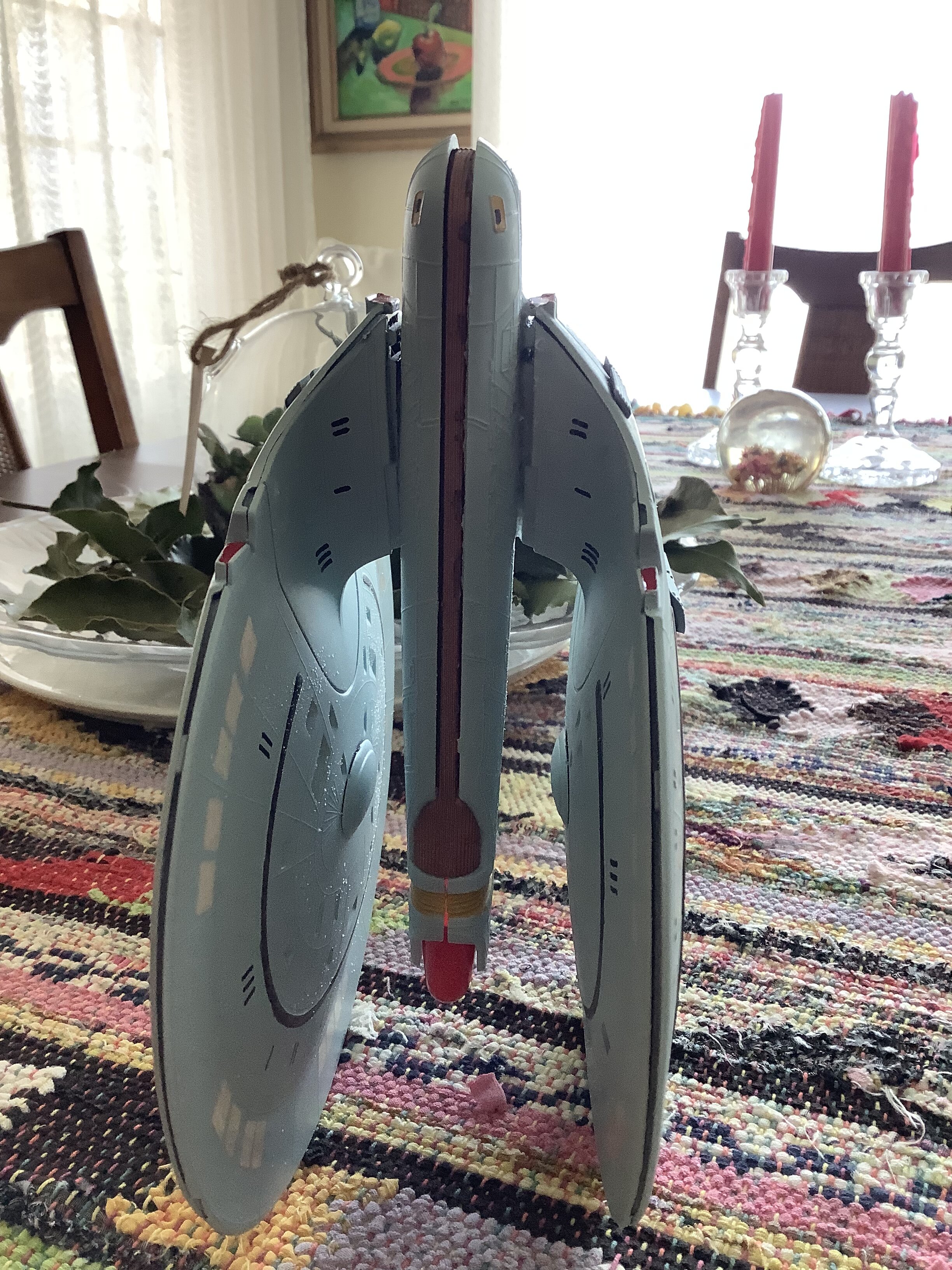 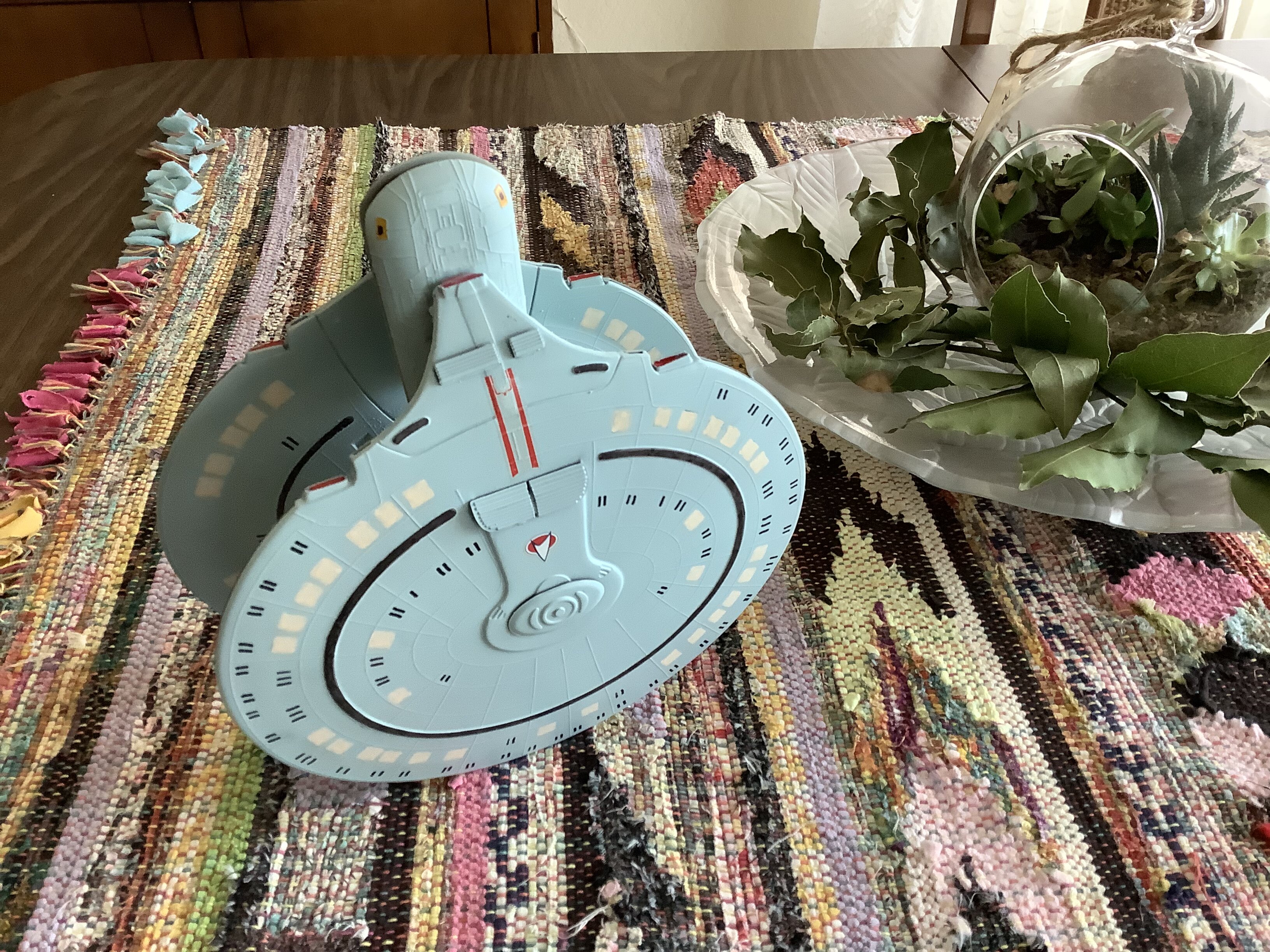 Looks great! Hope you post some finished photos before you ship it to the owner. Nice work.

Thank you. I will certainly post some completed pics. It’s really tricky gluing the second saucer to the nacelle because of the center of gravity/weight distribution of the saucer… you need to find a way to make sure it just stays put without constantly trying to fall off. In retrospect, I could have probably just glued the nacelle top/bottom halves directly onto the necks, and then installed the grilles and ramscoop, then joined the nacelle that way, but again, you have two big weights pulling against the nacelle. It’s an odd ship, and while I was happy to do this for my friend, I admit a lot of enthusiasm was lost when we learned that this wasn’t an official kitbash. I was kinda hoping I’d be the first to replicate it. Oh, well, lol. I’m pretty sure I’ll be the first to finish a Trieste, lol.
Last edited: Apr 3, 2022

That you will be the first to finish a Trieste.

Top saucer markings slapped on. I had a few spare sheets of big D decals to work with, so we decided on this name and registry, so I could just cobble it together from the sheets I had. 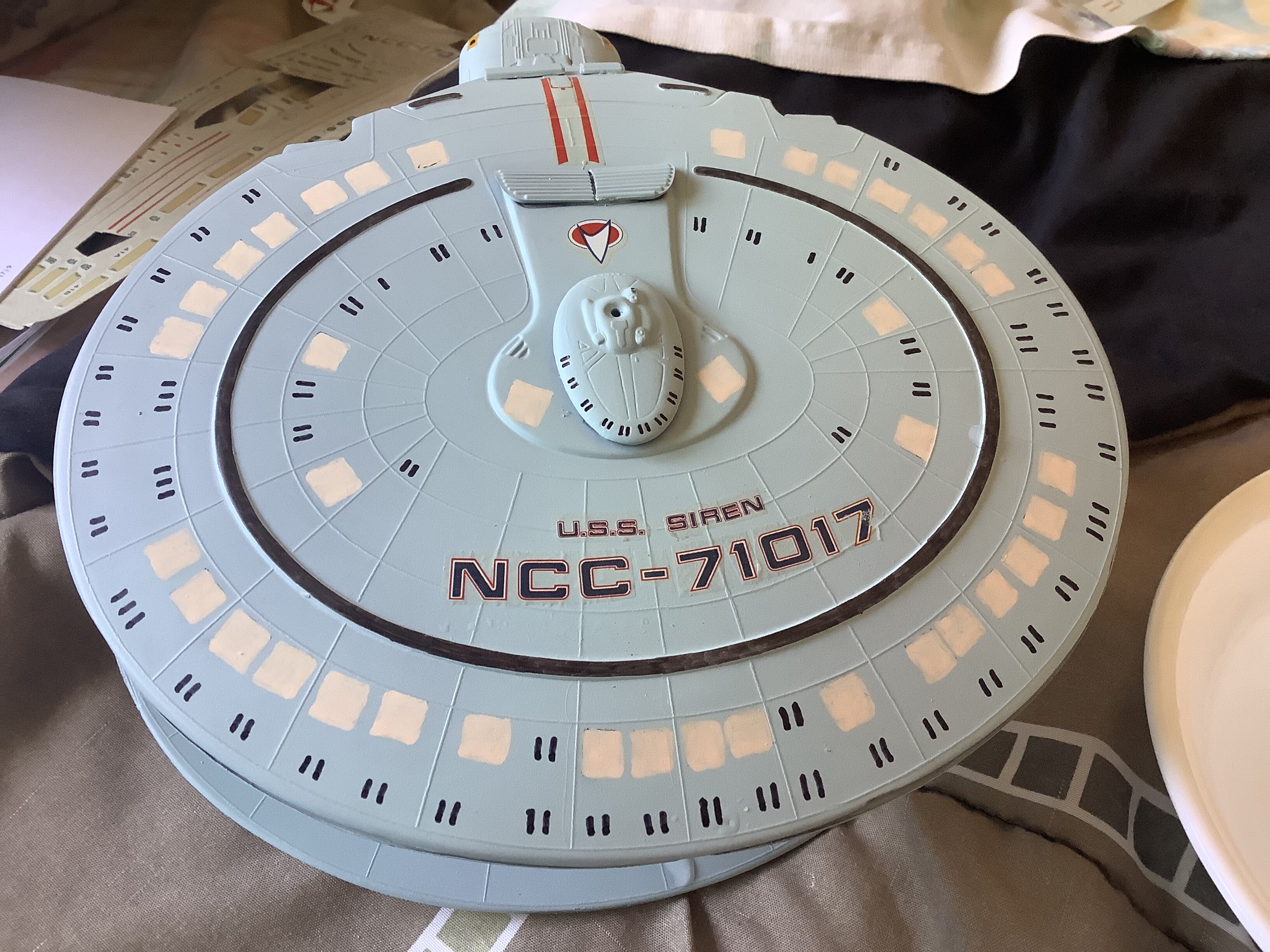 Also, I have a question… I used a sharpie pen for the windows. Will it be safe to spray a dull coat over this, or will it cause the windows to run/bleed?

Aaand, she’s done! Finally ready to leave the yard for her new home port. Definitely not perfect, but presentable. 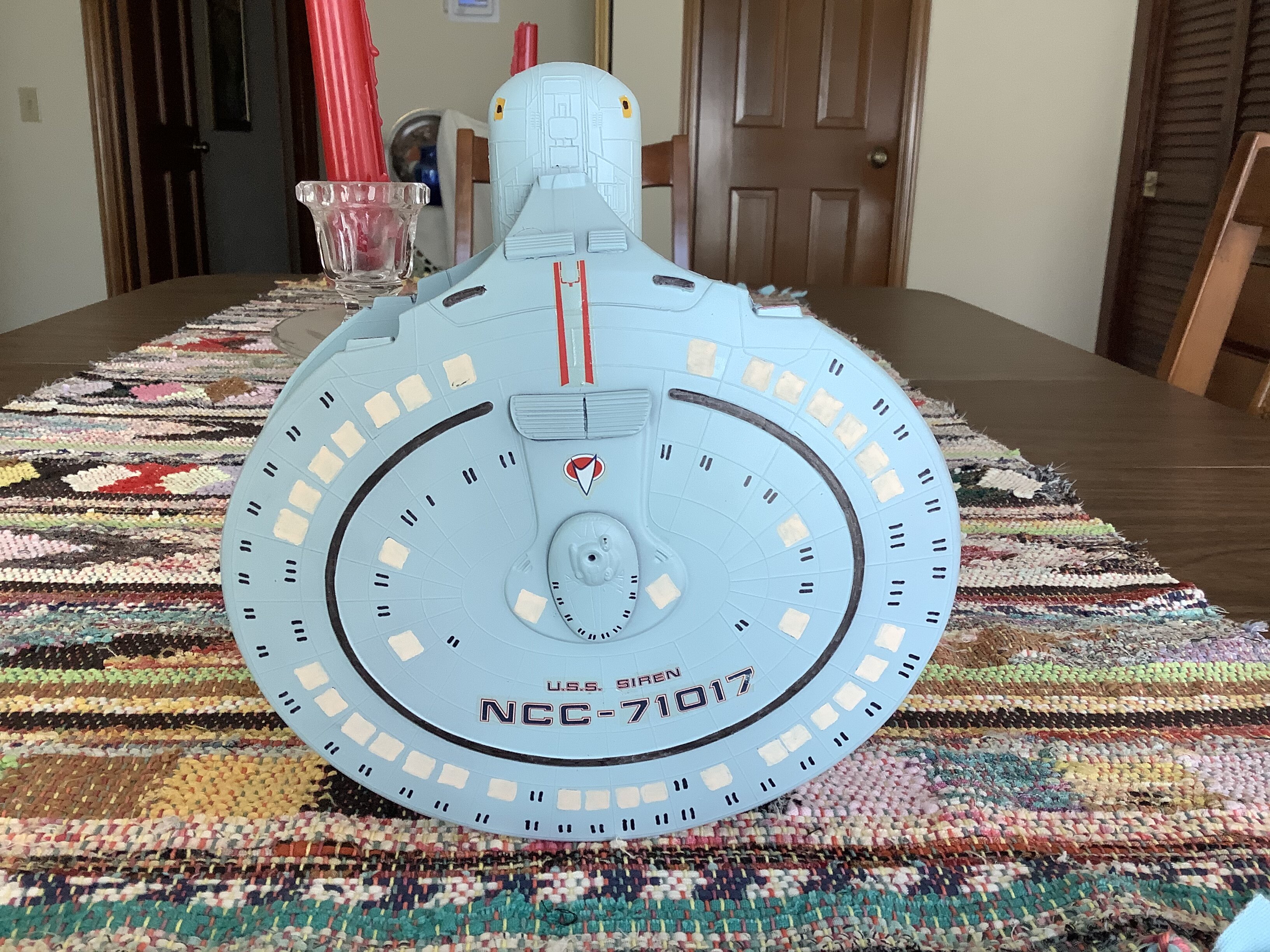 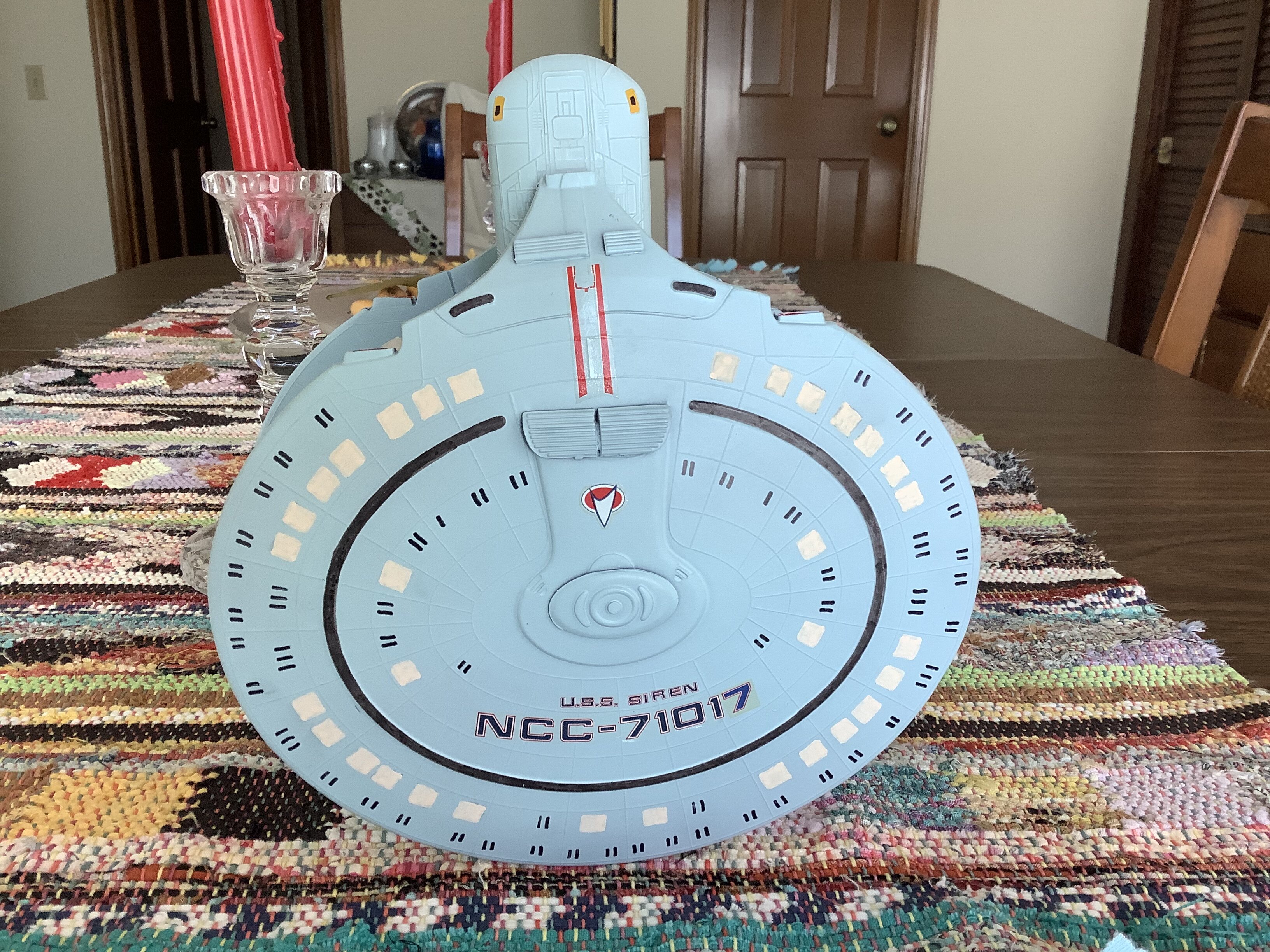 RPF PREMIUM MEMBER
I should have these decal sheets off to you in the next day or two. And your friend should take heart that even though it never appeared on screen, it's still a legit kitbash built by the guy who built those five that did get used.

Inquisitor Peregrinus said:
I should have these decal sheets off to you in the next day or two. And your friend should take heart that even though it never appeared on screen, it's still a legit kitbash built by the guy who built those five that did get used.
Click to expand...

Thank you… and yes, good point!

I like it. You did a great build of one of the most un-seen starships from the Next Gen series.

stevielewis said:
I like it. You did a great build of one of the most un-seen starships from the Next Gen series.
Click to expand...

'89 Batwing Studio Scale Kits: What is out there?