RPF PREMIUM MEMBER
I don't know a thing about this other than a friend of mine from high school was a die hard fan of the comics. I wonder what she'll think of this?
Last edited: Jul 25, 2022

Loved the comics/graphic novels. I’m a huge Neil Gaiman fan in general....,
Psab keel , if you’re into innovative storytelling (with a ‘bent’) then I think you’ll enjoy this. The ‘American Gods’ series was pretty faithful to the novel, as was the film ‘Stardust’ (both by Gaiman).
I’m keeping my fingers crossed that this particular series and the stories contained within, will also be faithful to their origins. Looking forward to seeing this. Any idea when it’s starting alienscollection.com ?

gedmac66 said:
Loved the comics/graphic novels. I’m a huge Neil Gaiman fan in general....,
Psab keel , if you’re into innovative storytelling (with a ‘bent’) then I think you’ll enjoy this. The ‘American Gods’ series was pretty faithful to the novel, as was the film ‘Stardust’ (both by Gaiman).
I’m keeping my fingers crossed that this particular series and the stories contained within, will also be faithful to their origins. Looking forward to seeing this. Any idea when it’s starting alienscollection.com ?
Click to expand...

Looking forward to this one..
It's been a long time coming but the technology is there to give it its just rewards.
Stardust was so good as was American God's and Good Omens was very good and the second series is in the works too..

RPF PREMIUM MEMBER
I hope this series does the comics justice or more realistically at least gives a new spin on them that's viable. Gaiman is a massive talent but Netflix really isn't reliable at all IMO. Some elements of the trailer look promising, others not so much.

RPF PREMIUM MEMBER
I’m confused as to what is happening in that trailer.

Like, it kind of interests me, but also doesn’t at all…which probably doesn’t even make sense.

My wife has listened to the book on Audible and really liked it, so I will probably give it a shot…but I’ve got no clue what it’s about.

RPF PREMIUM MEMBER
I thought one of the greatest draws to the Sandman comics besides the various stories running the gamut of genres, was the artwork. I don't know how the show would even attempt to get close to the art styles that the comics uses.

RPF PREMIUM MEMBER
I was at the London premiere for the new show. Neil Gaiman and much of the UK cast were there. They also showed the first two episodes.

I really enjoyed them. They weren't photocopies of the comics, which is good - it's a change in medium. But the new material fit perfectly, as though they were some other pages of the comics that we just never saw at the time. The acting and casting was excellent. The effects were mostly good. It was also a good mix of a structured narrative that made sense and flowed well, with lots of complex references to the comics for devout fans.

I'm optimistic for the rest of the season. Looking forward to it! 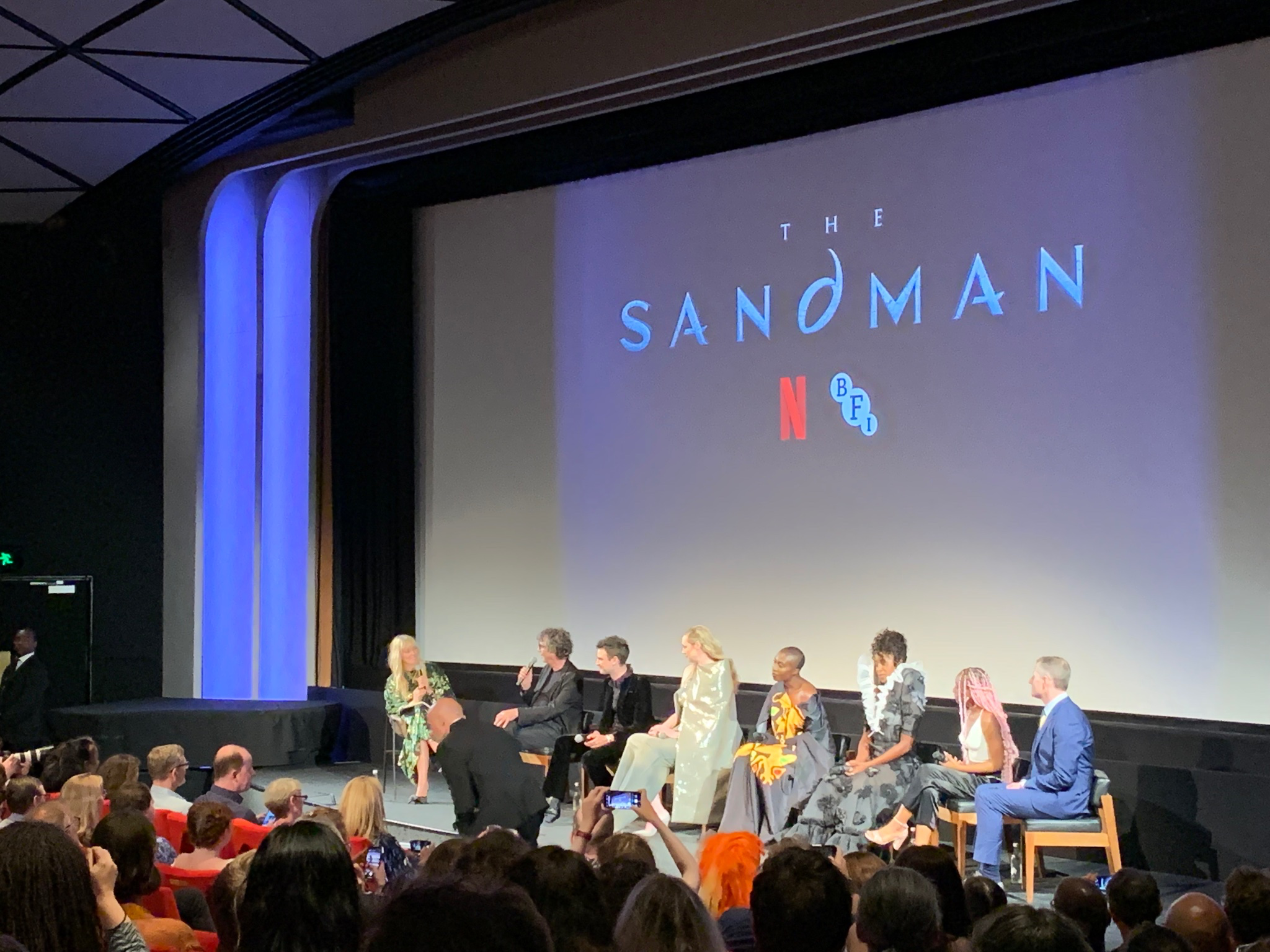 RPF PREMIUM MEMBER
Every time I think modern fashion makes sense I see a photo like this to remind me that no, no it does not make sense.

RPF PREMIUM MEMBER
Fashion of any era has never made any sense.

ScourgiousJinx said:
Every time I think modern fashion makes sense I see a photo like this to remind me that no, no it does not make sense.
Click to expand...

3Dsf said:
Fashion of any era has never made any sense.
Click to expand...

Even more so when no one else is wearing it.

ScourgiousJinx said:
Every time I think modern fashion makes sense I see a photo like this to remind me that no, no it does not make sense.
Click to expand...

As long as the characters in this universe remain faithful to their origins, I honestly don’t care what the actors portraying them wear outside of the story/series whilst promoting it.
I never did, nor probably ever will be a fashionista. It’s always going around (fashion) anyway.
That fact hit home after watching Sidney Poitier in ‘To Sir with Love’ as a teenager. We humans are/can be pretty dim-witted anyhoo !

RPF PREMIUM MEMBER
In reality for the most part I could care less what actors do or say offscreen as it's generally completely irrelevant. But if I did care I would not be able to take them at all seriously no matter what level of spectacle is considered acceptable.
Last edited: Aug 5, 2022

About to wrap up the season, and so far as a casual reader of the original book, I felt it was a pretty faithful adaptation as far as adaptations go. Especially as I start to re-read it now and have the show fresh in my head. The show itself feels much more like an anthology series than your typical streaming series which tend to be very focused on a specific set of characters episode after episode- but that's also what makes it seem consistent with the book. But as a result I could see newcomers to this show being put off by the seemingly random characters being introduced and then (presumably) left behind each episode (or barely being mentioned again). For example, "Ep 5: 24/7" feels very much like an issue of the comic where it's more focused on an entirely new and different set of characters until the end when Dream shows up to wrap up the Dr. Dee/Cripps story. As I was watching it, I could only imagine a casual viewer watching it going "WTF is going on?". Sidenote: my wife absolutely hated that in the episode the entire world is basically brought to near catastrophe, yet it's totally shrugged off and never mentioned after. Something comics would do all the time, but nowadays that in itself would be the whole plot of a 10-ep series.

Some things don't quite line up as well in terms of the timeline- they kept the original start date as in the book (1916) but set the present as our present (2021/22)- which means most of the characters that were elderly or already over 90 in the original book's timeline (1989-90), are now 100+ easily- which stretches suspension of disbelief by a lot. The relationship of Unity to her offspring is super confusing as they make a point repeatedly to say she is the great-grandmother of Rose- yet there's a missing piece in that lineage that's never addressed (no grandmother- just Rose's mom Miranda which I could have sworn was stated to be Unity's direct daughter).

My guess is this season will resolve the 'Rose as Vortex' and Corinthian storyline as per The Doll's House issues, but the dangling thread of Desire's role in it could feel frustrating if there's no guarantee of a follow-up season.

We watched this over the weekend.

I had basic familiarity with the overarching story thanks to listening to the audio dramatization that Audible did (Also HIGHLY recommended. James McAvoy as Morpheus was a hard act to follow), while my husband only had cursory knowledge of some of the characters that wound up in other media like Constantine.

Both of us absolutely loved it. It was beautifully adapted. The casting was absolutely wonderful (Morpheus and Death are particular standouts in my opinion), and the visuals were lush and imaginatively done.

I dearly hope they do a second season.

I'm two episodes in and already absolutely loving it. It has its own terrific 'feel' while remaining very faithful to the atmosphere and tone of the books. The casting so far has been just 'chef's kiss' and the production design is gorgeous. I'm thoroughly looking forward to the remaining episodes...

Anyone know anyone who’s got a Sandman helm project thread, that’s a project I’m looking to tackle!

ComeradeDog88 said:
Anyone know anyone who’s got a Sandman helm project thread, that’s a project I’m looking to tackle!
Click to expand...

Just ordered my supplies to start this one. I've made a few of his props, & the free patterns, instructions, & techniques are top notch...


Not sure if I'll do a thread, but we'll see. I love the fact that the helm had been interpreted so many different ways, by so many different artists, that there's really no wrong way to do one, but this one may be my favorite.

The Pentaverate on Netflix