Some of you older members will remember when I started this build over two years ago. For reasons and things that arose I was never able to get on with it. Now that things are settling down and by the very kind gesture by AndrewRF of letting me build this suit ahead of his, I am getting to it. Plans are to suit it up at San Diego Comic Con in July. With the old thread kind of just lingering around and the build has changed so much, I decided to delete the old thread and start fresh. Not a lot so far to show as I am awaiting the mask and skin which should be here shortly. This suit is gonna be low tech. No med pack, no cannon, no lasers, and bare minimum tech of any kind. Hes a brawler, up close and hand to hand. Much like the Samurai they have admired enough to incorporate that style into their own armor.

The build was inspired by the Samurai Predator drawings by member Robillicus. The suit is based off of one character in particular while drawing bits and details from the others he did as well. 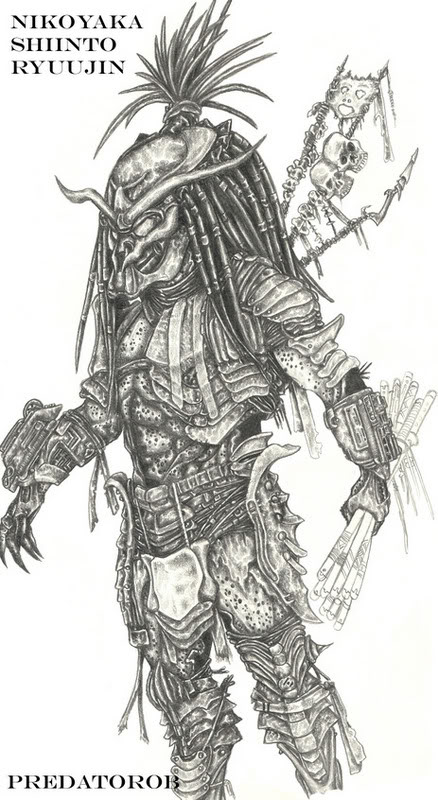 I started to sculpt over a Gort bio and that didnt go so well and I wasnt happy with it so I scrapped that idea and picked up a Boar bio from Biohunter76. This is my favorite movie bio and it has the base look I want. A few mods and additions to this as well. 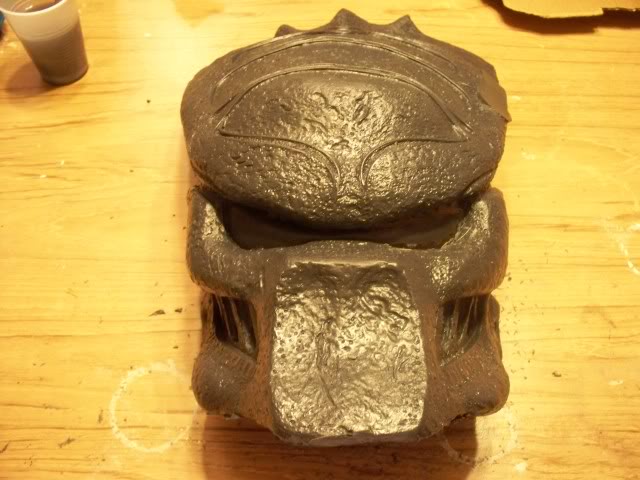 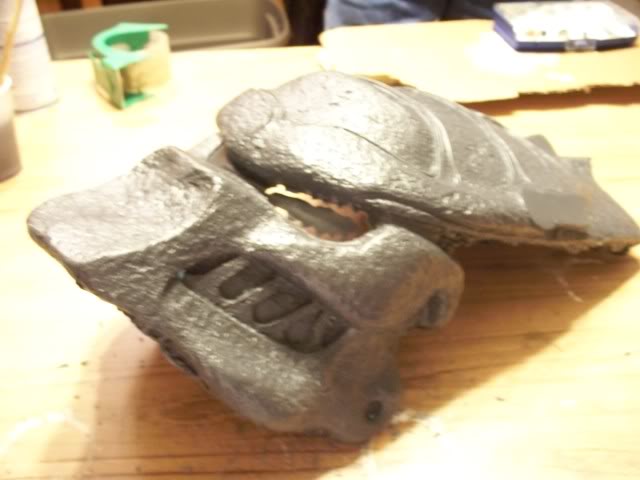 The suit itself will have pieces of armor and things from every movie we have seen so far. In Rob's drawings it looks like the Samurai clans had all types of armor mismatched together. I for one liked that look. I think it gave them a more primal and savage look.

AVP Chest Armor from Seahunterr. These will be highly moddified and things/details added to them. 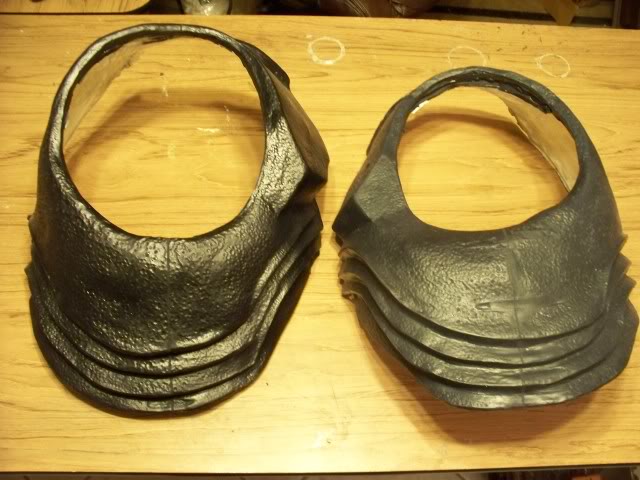 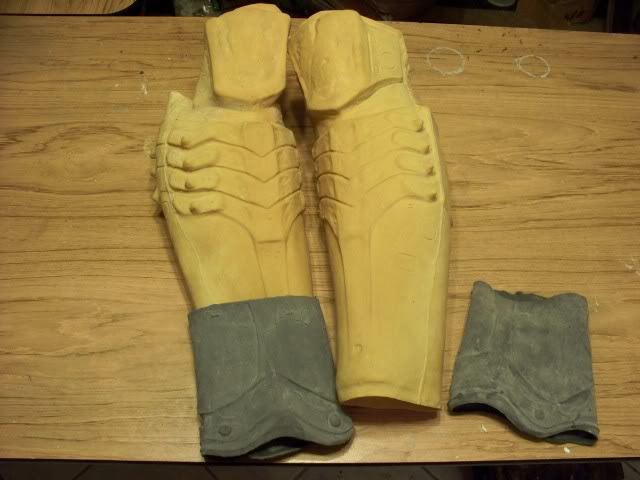 I will be running dual blade gauntlets. P1 and P2 gaunts that will have mods and additions as well. 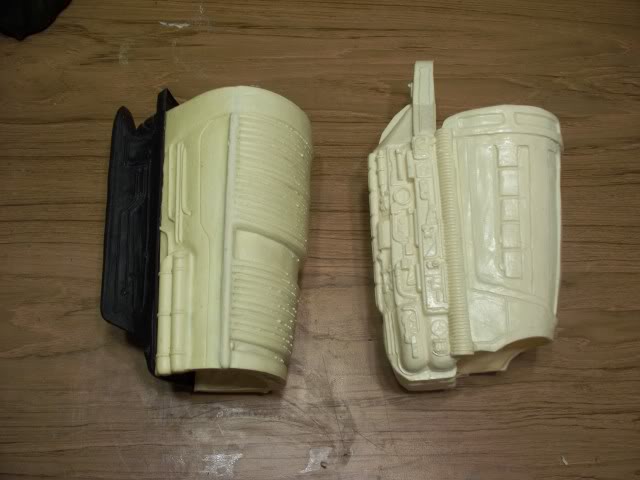 A Wolf neckring, P1 cod, P2 shoulder armor and cod. These pieces wont necessarily be in the original places they were before but, its gonna save me some sculpting, molding, and casting time. 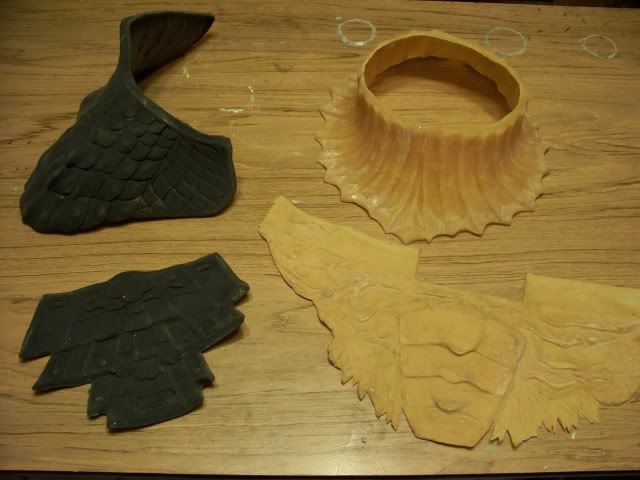 Money being as tight as it is I am reusing some old P2 hands I had. Paint is wasted on them but, gonna be redone anyway. 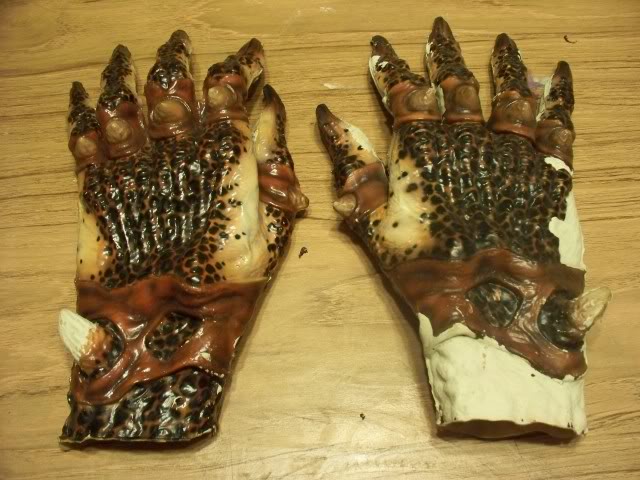 Ruffkin feet with toe dusters. I will be making some custom blades for the dusters as well as the blade gaunts. 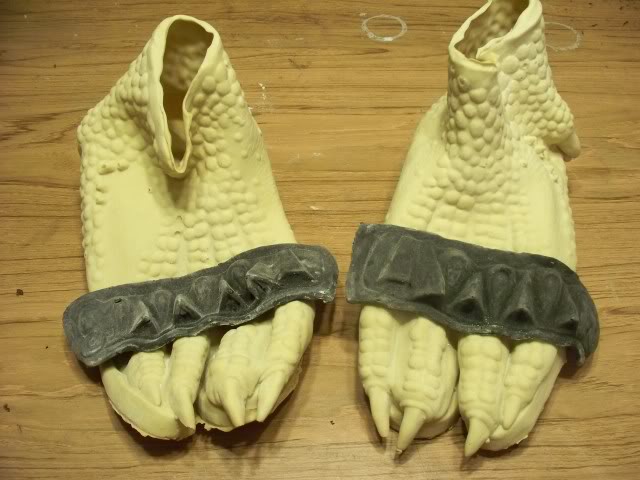 Box of misc dreads. Mostly Bambooie's but, not sure whats all in there. 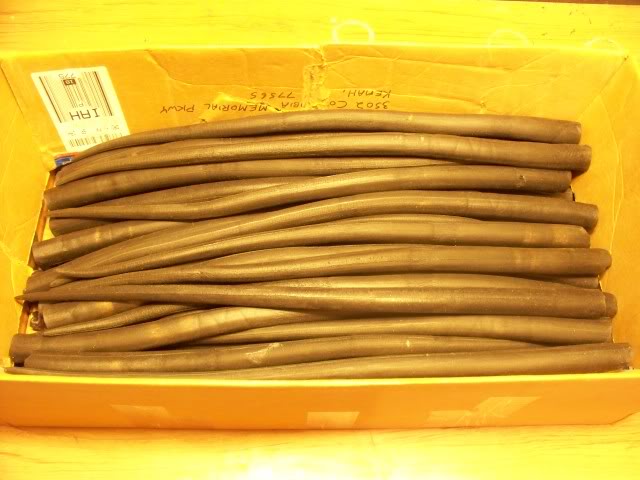 Bought a couple Tiki torches from Wal-mart. THese will be the the trophy poles you see on his back. The belt and harness I will make out of leather much like I did on my Ceremonial suit. 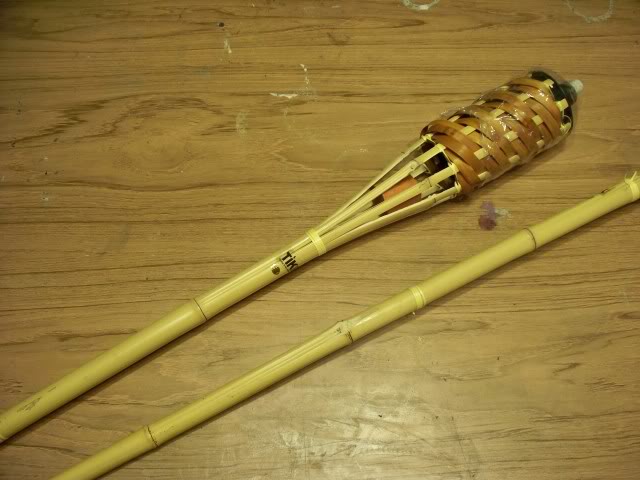 Misc. boxes of bones and stuff for details. 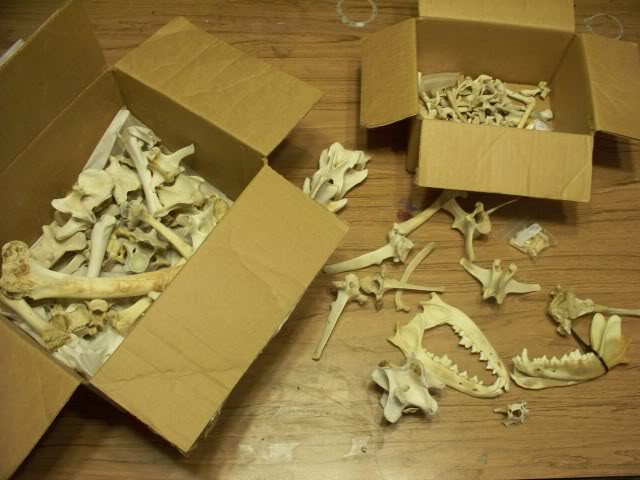 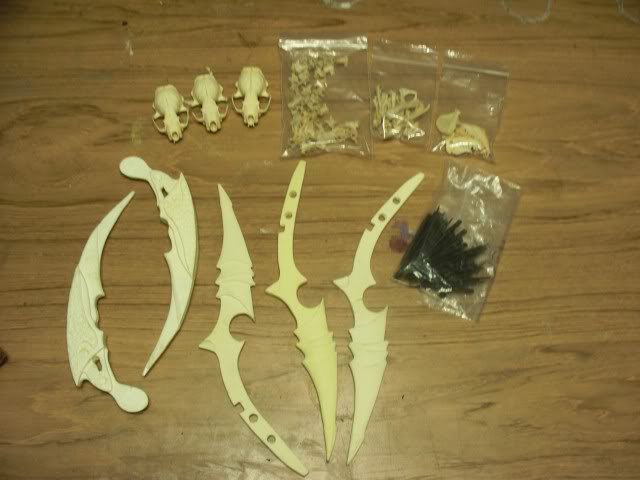 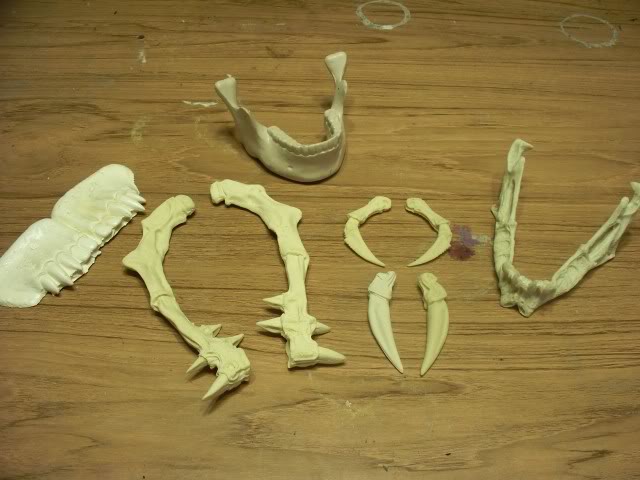 So far these are my favorite pieces for the suit. These are armor details from @ the Edo period. I got these from a seller from Japan. The same seller of the Samurai armor I sold to Paintninja. I love these pieces. Very detailed and just neat little pieces. 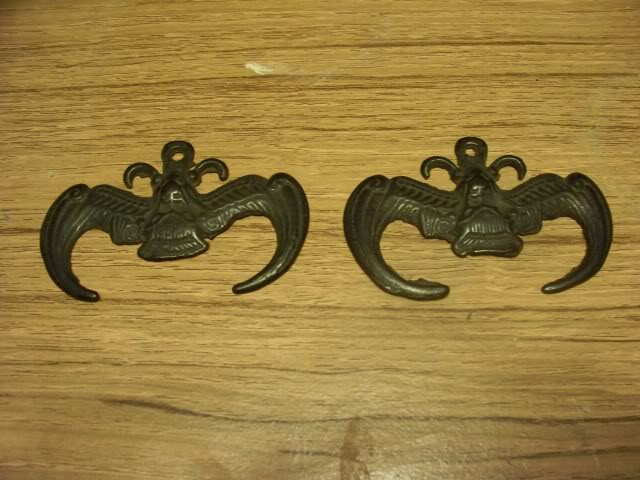 I have stoked the fires and am excited to get going on this suit. Havnt done something for myself Predator wise in awhile. Its gonna be a blast to do this suit. Its been in my head for over two years. The rest of the armor and many other things for the suit will be sculpted, molded, and casted by me. Im gonna do my best to bring Rob's drawing to life and make you guys say...Ceremonial suit what? If it comes out like I hope it can and looks like the image I see in my melon...should be pretty cool.

Thanks for looking,
Bovine13

Nice! Glad to see you picking this up. Its gonna be an awesome suit

I love that samurai sketch by Rob, and I'm looking forward to seeing it come together.

From Rob's pencil and paper concept to LIVE at SDCC

Heard you mention sometimes in your posts about some samurai pred build and was very curious. Like with rest of your suits this will look awesome!!!

I always tought a samurai pred would be a awsome concept,good luck with the suit!
M

Dig that neckring and blades.Now its time to get that clay stuck under your nails and open that third eye.Good luck man.

right on Scott, this has always been a cool design. cant wait to see it it in life.
hey man, where do you get the P2 pauldron by itself? or did you cut it off the whole chest?

xdmray said:
right on Scott, this has always been a cool design. cant wait to see it it in life.
hey man, where do you get the P2 pauldron by itself? or did you cut it off the whole chest?
Click to expand...

I got it seperate from the chest. Biohunter76 sells them.

RPF PREMIUM MEMBER
Scott, i seriously can't wait for this that concept is awesome!

This is gonna be some suit! Best of luck Scott

I will be watching this thread closely for sure, cant wait to see some progress on it. Great concept.

Wicked. Got some great part there, but I'm most excited to see what you do with the bones/jaws.

finally you are getting to this build! i cant wait!

Glad to see this suit coming about again.

Glad to see your building for you, for a change. I can't wait to see you put it all together man, dominate it.

I took adavntage of AndrewRF's skin hanging there and made up some sculpting bases for the armor. No skin was harmed in the making of said bases. Ha! Layed some plastic wrap on the skin then used plaster cloth from Hobby Lobby. These should be good and dry by the time I get home tomorrow night and i can start laying the clay down. Latex and foam on the way from Silpak so I can cast when ready. 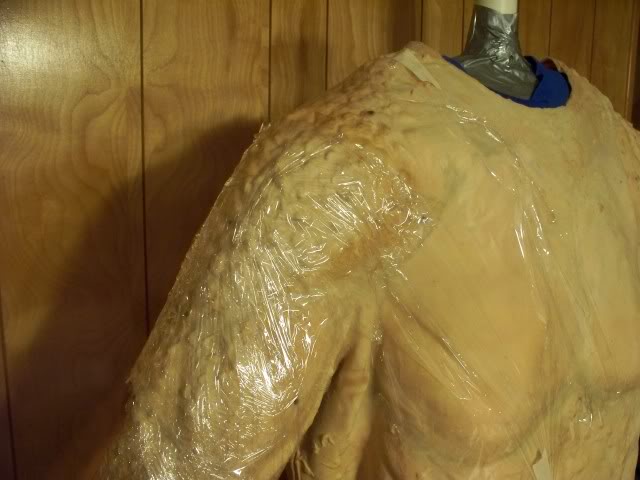 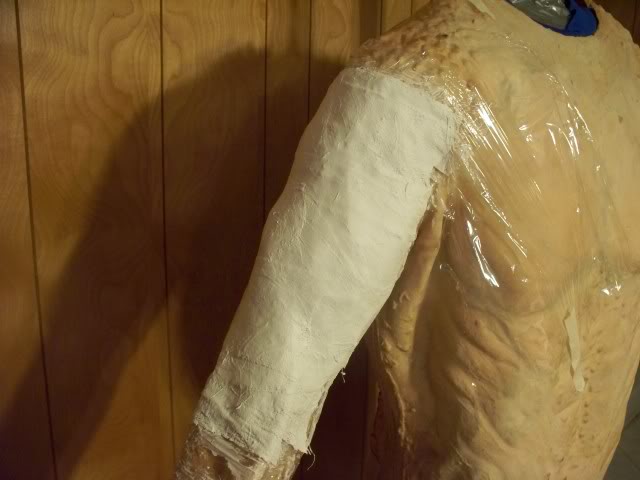 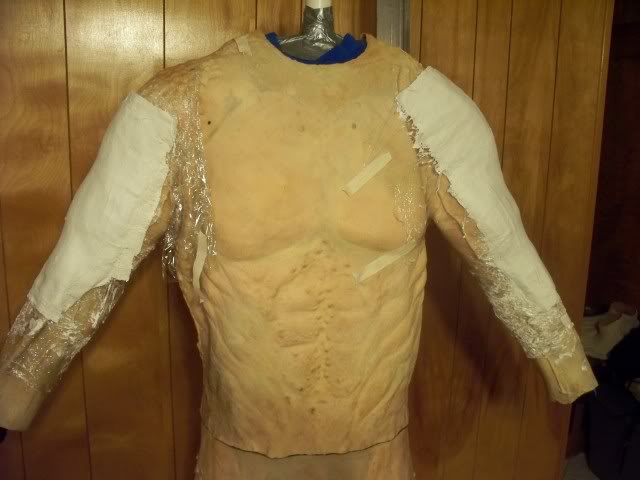 Started playing with the bio some. Cleaned up the casting and cut out the eye area. I got the Samurai style helmet pieces from a childs toy bow and arrow set from Wal-mart. The center section im still toying with. It will be molded and casted out of resin. The extensions, cant recall the proper name...(Maedate ?), will be removable for shipping. 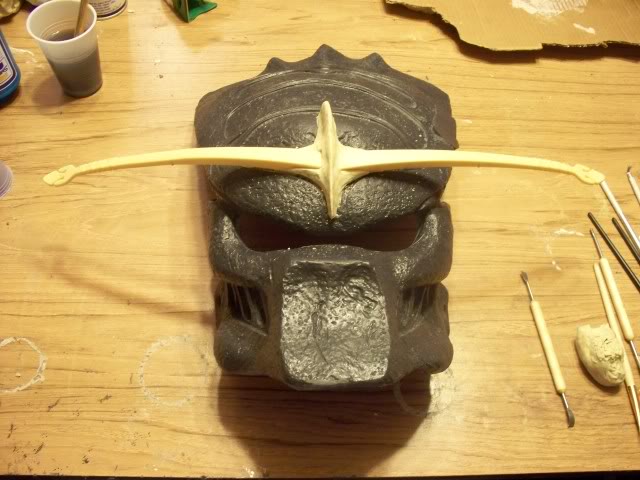 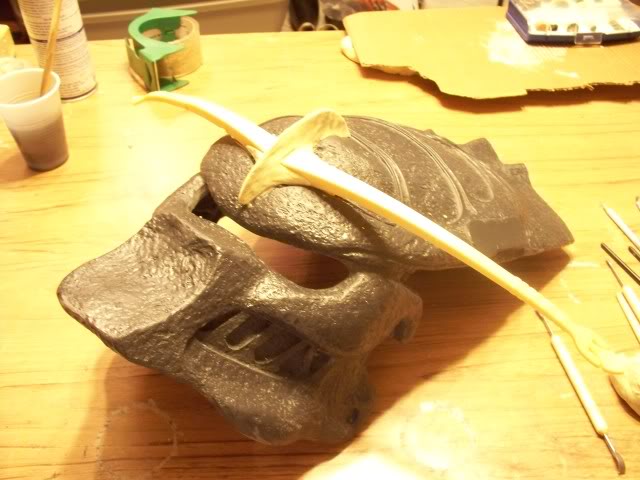 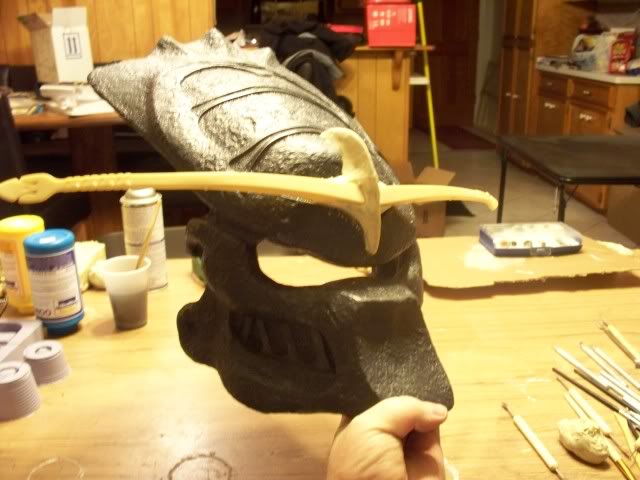 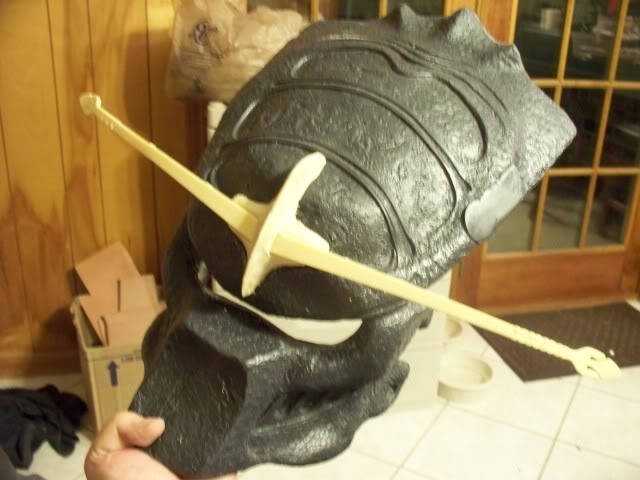 Thanks for looking,
Bovine13

Well it's about time!
Good to see you are starting on this build,..it has been a long time coming.
I know you will knock this outta the ball park Scott.
Good luck with the build Buddy
U

Lee is very pleased to see you back on this project.

and the best thing about the samurai build is, you are making it so it will be accurate.