Jintosh said:
I've been following your Balkan card search intently, but what you're doing in the Balkan thread is way beyond me.
Most canopic jars look like JARS. The figures I got and posted could literally be substituted for the graphics in a printable STL to make this whole sign printable. I just don't know enough about hieroglyphs to clearly read which glyphs are on the bottom of the warning, and draw them (or paste from google images) into a high rez 2D pic. My modeling skills are better than my art skills.

If someone can even just NAME the hieroglyphs !!!! Then I can get the images and make the sign myself.
Click to expand...

Looking at it, they're mostly not proper hieroglyphs. It might be quicker to just mess about in Photoshop, but either way I'll a look when I get a moment.

I definitely agree about the four sons of Horus, it also looks like they have canopic jars at their feet (or at least 3 of them do).

There's a scene in the 1932 movie, a few moments earlier that has a different seal to the tomb. In a follow up movie, The Mummy's Hand, there's another "Seal of the Seven Jackals", but it looks more like that first seal, but no real close up. Was hoping to maybe see if props were reused and if there were any better camera shots.

RPF PREMIUM MEMBER
Oh man ! We were so wrong.....this is a NINJA knife in the movie, not Egyptian !

It started out as gibberish

Love it! Guess I'll be hitting up shapeways to do a print for me. Much thanks!

(Speaking of which, Shapeways a good business to invest in? I see they are merging with a SPAC, soon to be finalised. Many people use shapeways?

Made a tiny bit of progress on the test piece today. Weather went to hell so had to give up. Hopefully it will be dry tomorrow and can do some work outdoors. Hoping to at get a test mold and cast done before the weekend is over.

So did some more work on the test piece, and couldn't resist giving it quick spray of some chrome paint I had laying around. I think it could be done much better and not really satisfied with it, but will still cast it in metal powder to see how it looks after a few rubs with steel wool.

RPF PREMIUM MEMBER
Looking good. And it actually DOES remind me of that Japanese knife I posted, that was also metal.

RPF PREMIUM MEMBER
I remember back in the day, that they told us kids not to wear white for class pictures. And I think black was also an issue. With primitive photography, solid white or solid black might wash out the details. Maybe the knife is silver just because that was what was going to show up the details the best on the camera. It's a lighting choice, not a metal vs. stone choice.

This prop may have even started out as a different color that didn't show up. So, they painted it at the last minute to show up better. The details on the knife are important to the plot, so making them show up better would have been important.
Last edited: May 9, 2021

A couple of days ago, was a bit hungover and needed something quick to work on/distract me (I definitely did not use power tools… eek). Tried turning an old wine box into a shadowbox case to see how it would be with a motion activated LED wardrobe light. Then tried what it looked like in an acrylic box that some other wine bottle came in. 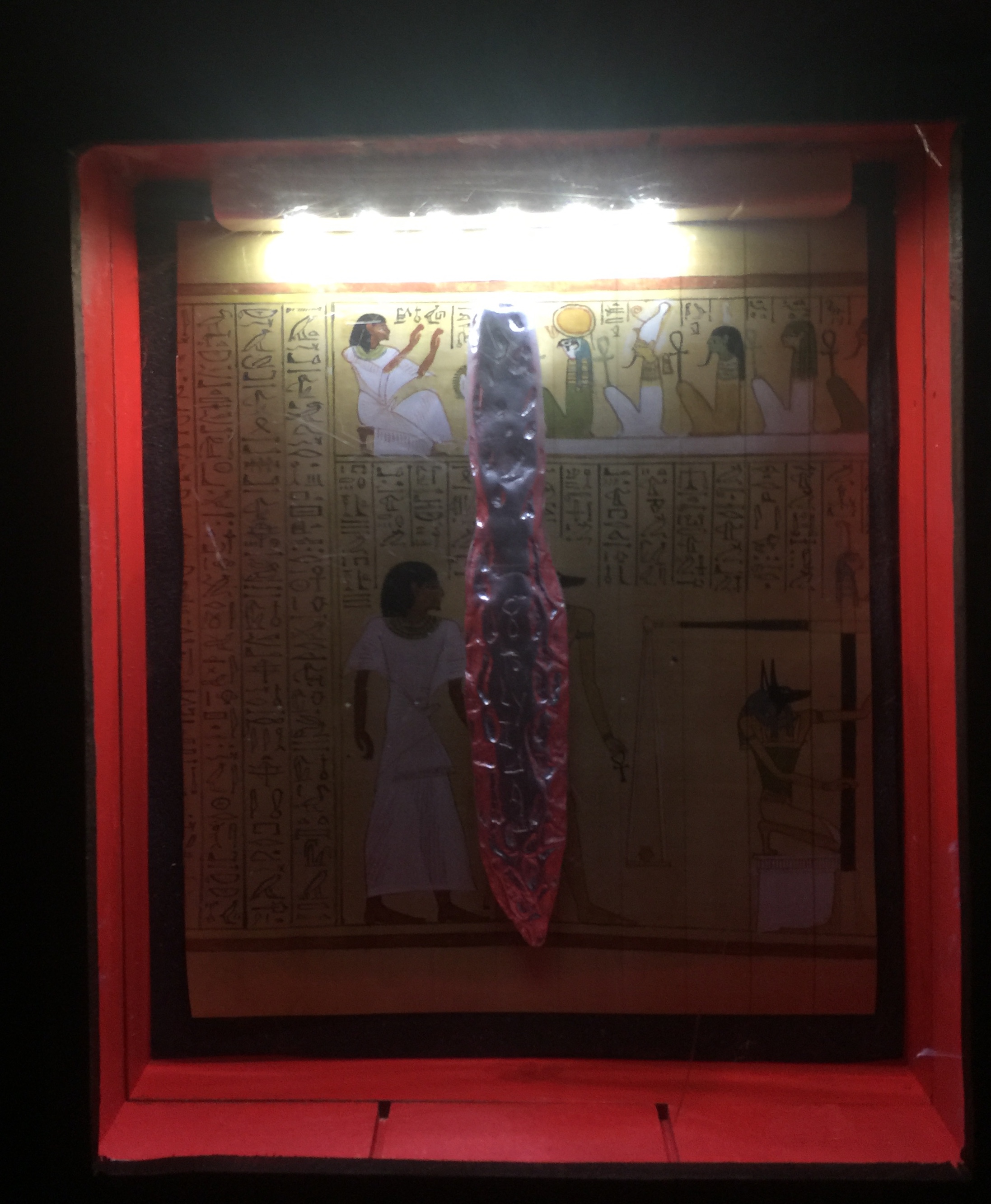 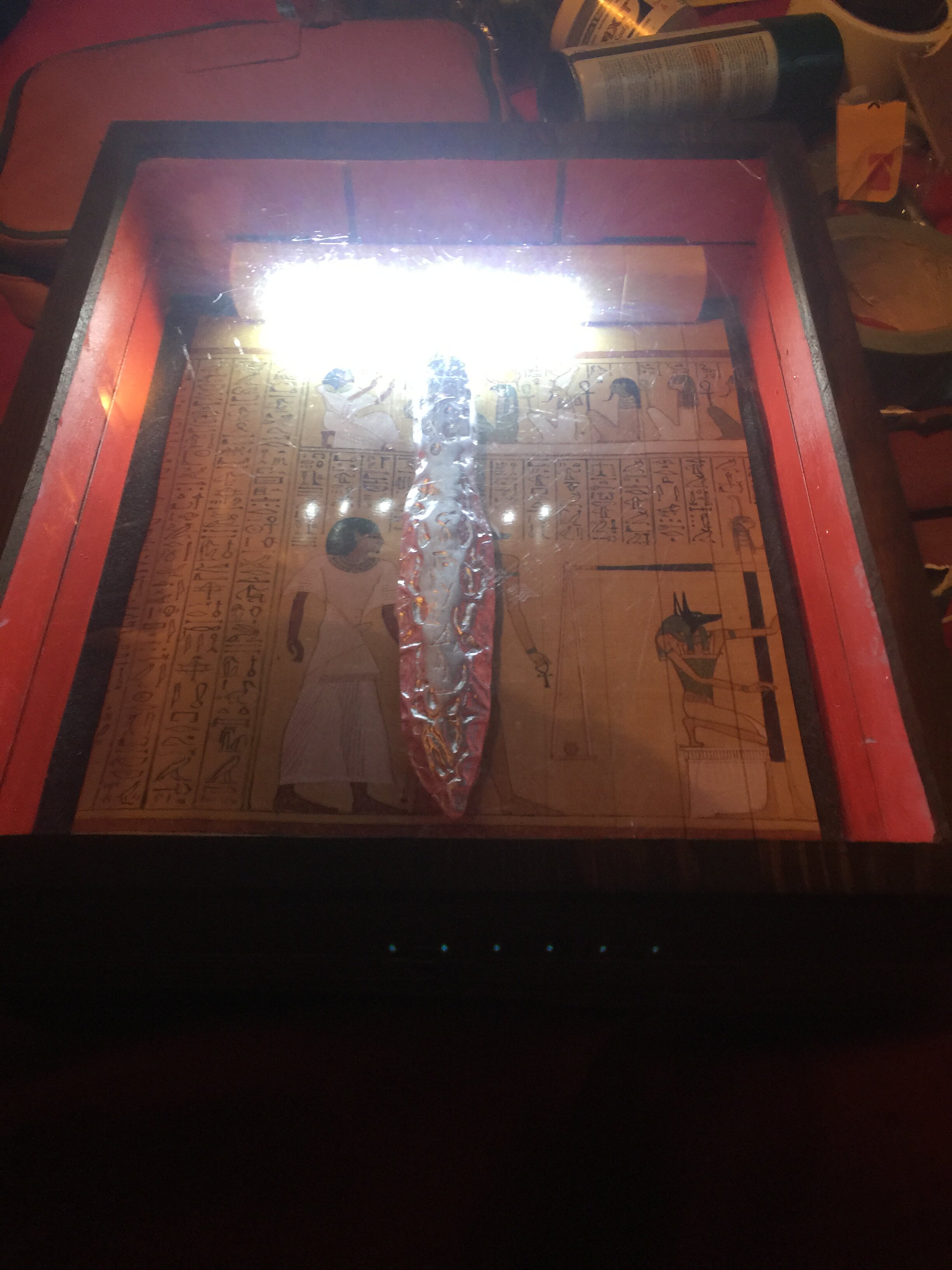 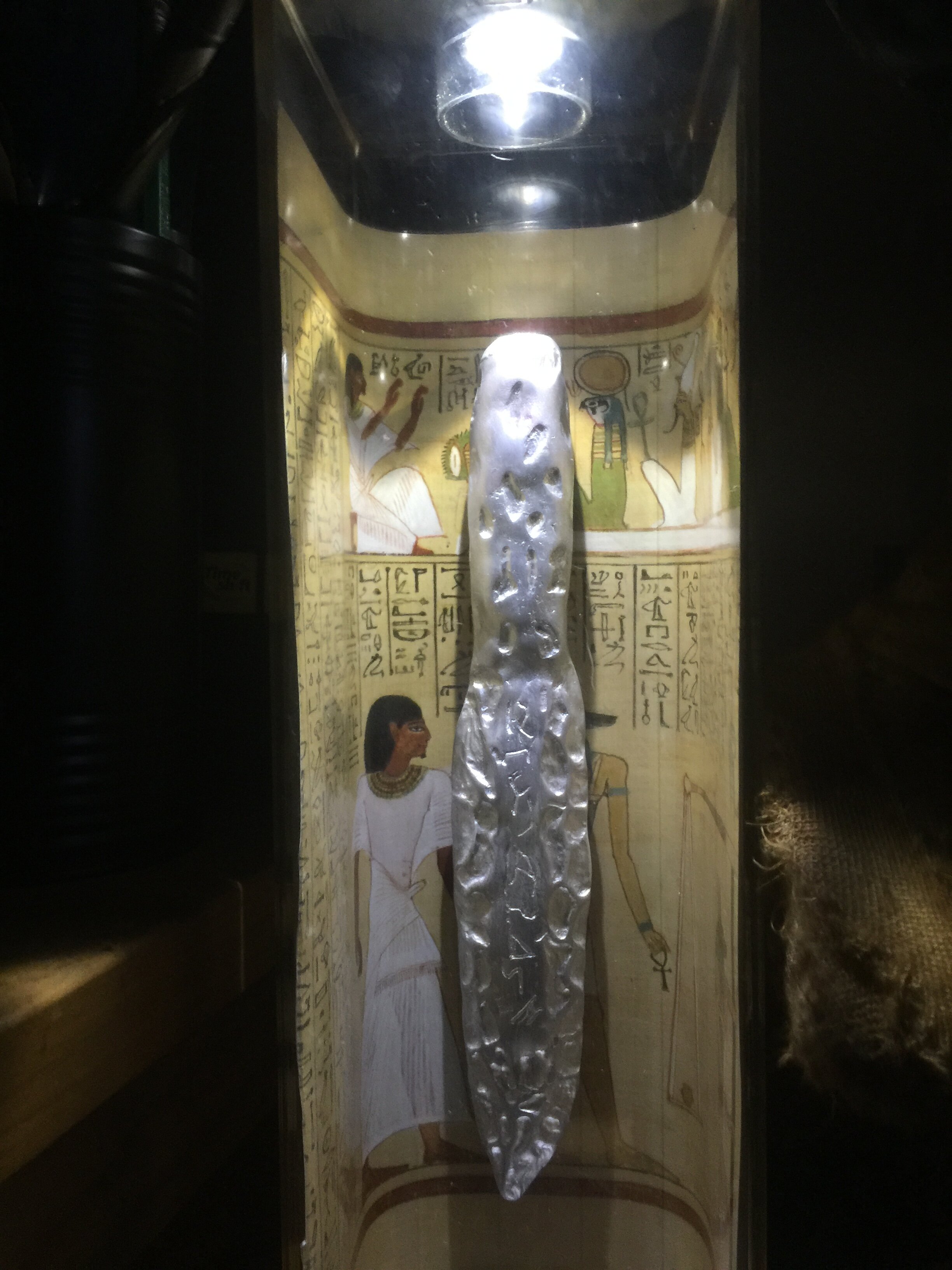 RPF PREMIUM MEMBER
Very nice! How are you "floating" the dagger? It turned out great by the way!

JamesM242 said:
Very nice! How are you "floating" the dagger? It turned out great by the way!
Click to expand...

White-tack. Still holding it up as I type a few days later!

Will try carving the dagger from wood next to see how that comes out. I think wood might be better since my sculpting skills kinda suck and a dremel and sanding disc to get the knapped effect. Used the dremel and engraving bit on the first one, and now thinking the sanding bit would have probably been better. All trial and error in getting one that looks like the movie one.

Have one of those 12" Ardeth Bey models that sideshow released a few years back. Last night I was moving it and looked at the dagger the model has, and the dagger even has tiny hieroglyphs on it, but different compared to the screen model, much the same as the mini-scroll the model has too, just random and not movie accurate.
Last edited: May 15, 2021

Anyone know the brand or dimensions of the EVIL Dead chainsaw prop blade?