RPF PREMIUM MEMBER
Also, might as well share a picture of helmet with the dome-piece on. Formed in a 6mm PETG and it’s the only picture I have at the moment since I’m currently in France dor a week. More details on the completion of the build will be coming later. 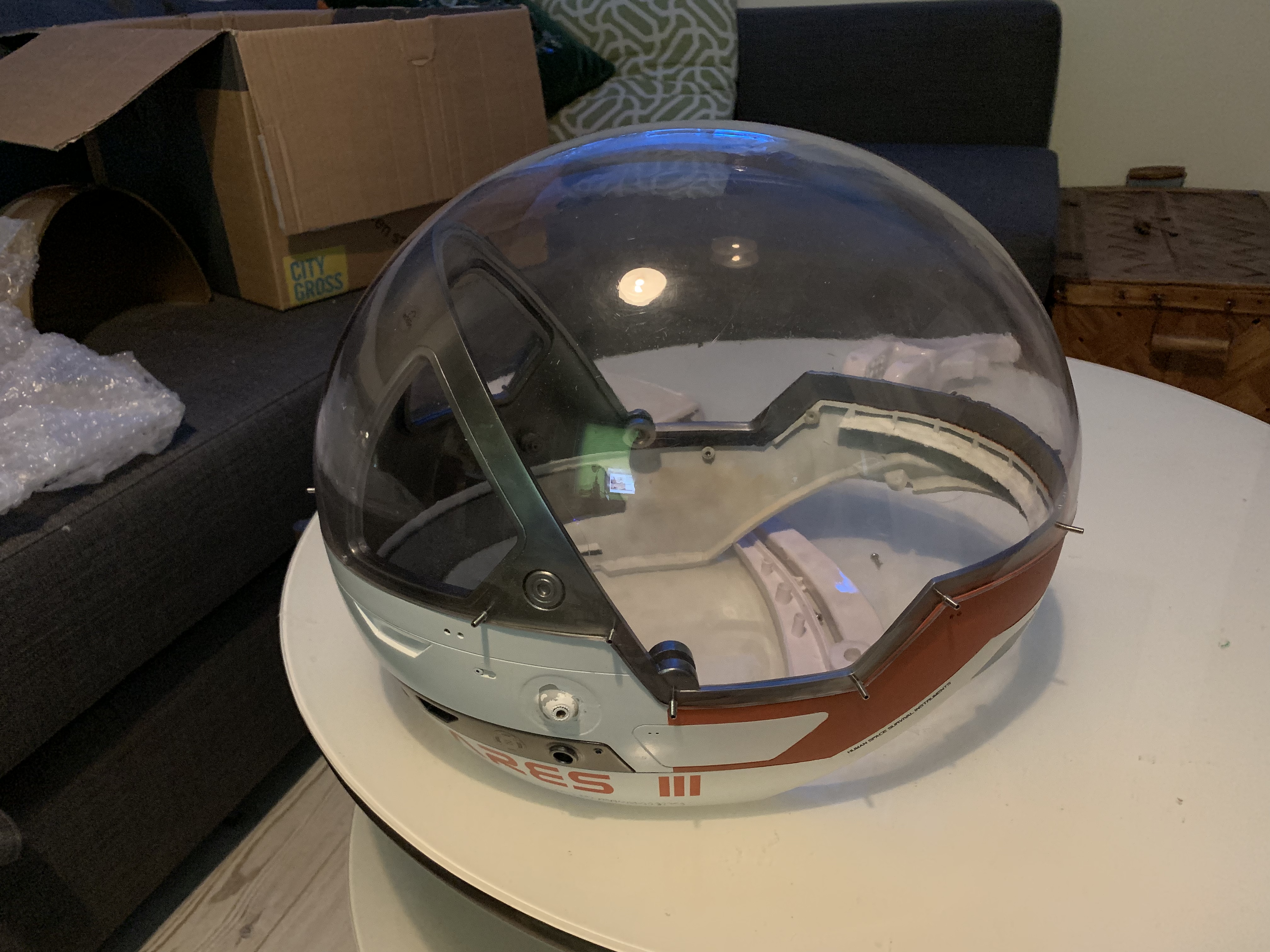 im loving seeing this come together!

RPF PREMIUM MEMBER
It's been a while sine my last update, and at times I kind of thought it would not happen. But it did. I finally recieved the 3mm PETG vacuumformed inner visors after almost 1.5 years wait.
This means that I can finally end this build, which I'm pretty keen on doing since I really want to go on to new stuff. Anyway, In this post I'll talk about the coloring of the visors.

I had an idea that I wanted to tint the visors using synthetic dye. I had previously bought the color needed which was Jacquard iDye Poly Synthetic Fabrics Golden Yellow . I unloaded all purchased packs, which was 5, into the heated water basin. It all felt a bit precarious since I was kind of forced to do this in our kitchen, and preferable, be done before it was time to get my son from kindergarten without to much of a mess being made. With that in mind, I put on a brave mindset and got on with it. I had previously prepared the visors by precutting them in a rough manner and tied them together two and two. I did 5min stints in the 145°F hot bath after which I rinsed them in coldwater and put them back in. Here I should probably mention that I messed up, the tub I bought for this particular occasion was just exactly not deep enough whcih resulting in the visors touching the bottom. This in turn meant that a hotspot formed and this gathered paint unevenly in this area. Luckily, this is in an nonvisible area when assembled so I can just count my lucky stars and go on That said, I had 3 pairs of visors, So I decided to try out different tints. I ended up with having visors that where dipped four, six and ten times. The ones I dipped ten times started to go over in a shade of pinkish red so I guess I kind of maxed out there. All of them where to light in hue to work in the helmet though so I painted the inside of them with a golden spray paint and to be completely honest, I'm pretty pleased with how they turned out. I had previously tried just using the golden paint inside the PETG and did not at all like that color so this felt like a huge improvement for me. I guess this is a good time for some pictures, so here we go(And I'll add a extra sneak peek of the almost finished helmet, I really wish I was a better photographer):

RPF PREMIUM MEMBER
I have to say, I feel kind of done with this build now. I never could imagine that the dome pieces would take the better part of 18 months to source.
That said, I've now assembled it and given it a light weathering. It was a beast matching up the cutline of the dome to the helmet and in the end I could not really get to the result I was hoping for. I guess that's what you get when working with a silicon sock clad buck and vacuum formed parts, Not really the most forgiving techniques from a tight tolerance perspective. Another issue is that weight, With this 6mm PETG-dome it weighs in at 2300g approx which is not really something you want to carry around for long stretches. The thinner 3mm PETG domes that I would have liked to have would drastically reduce the weight but it does not seem as those ever are going to appear so, alas, It is what it is.
Anyway, I'm still quite happy with the result and this has definitely been the most difficult project I've embarked on, due to the complex dome primarily, and I'm pretty pleased to be able to call it done.
(To be honest, The one shown here is going to a client overseas who does not care about the weight. I do have my private one yet to finish but I think I need a bit of a break before I'll get on to that one)

Here are some pictures to show the result:

Thank you, It's been a ton of work and I've learned a huge amounts of do's and please avoid's

Didn't resist and just got the files, thanks for sharing.
Having just finished a long project its nice to have something lined up to get excited about, looks like a proper challenge too.

Love it and the side lamps are on!! Amazing work all in all

Didn't resist and just got the files, thanks for sharing.
Having just finished a long project its nice to have something lined up to get excited about, looks like a proper challenge too.
Click to expand...

joberg said:
Love it and the side lamps are on!! Amazing work all in all
Click to expand...

Thank you so much guys, and good luck with the build Diogo! Good thing to do during these weird and trying times.

Amazing! It's a work of art! Fantastic job.

shaunsheep said:
still working on mine.......
Click to expand...

Yeah, I really wish I'd be able to get more domes but it seems tricky as it stands atm. Sorry about that.

Rymo said:
Amazing! It's a work of art! Fantastic job.
Click to expand...