RPF PREMIUM MEMBER
Wanted to share the current obsessive personal project I’m working on. I – like just about the rest of the world – am totally a fan of “The Child” on THE MANDALORIAN. As a puppet builder, I decided I wanted to take on building a fully practical puppet and be as accurate to his look and size as possible. I’m making him initially as a “ragdoll” static prop, soft body construction, then I’ll do a version that with either be tackled as a more traditional cable puppet, or possibly a fully remote operated animatronic. I’ll update this as he progresses, but I wanted to share the beginnings of things –

I did initial head modeling from scratch in SculptGL to lay out the basics of his head shape, some symmetry, etc.

I exported that as an STL and printed the rough file on my Taz Mini. 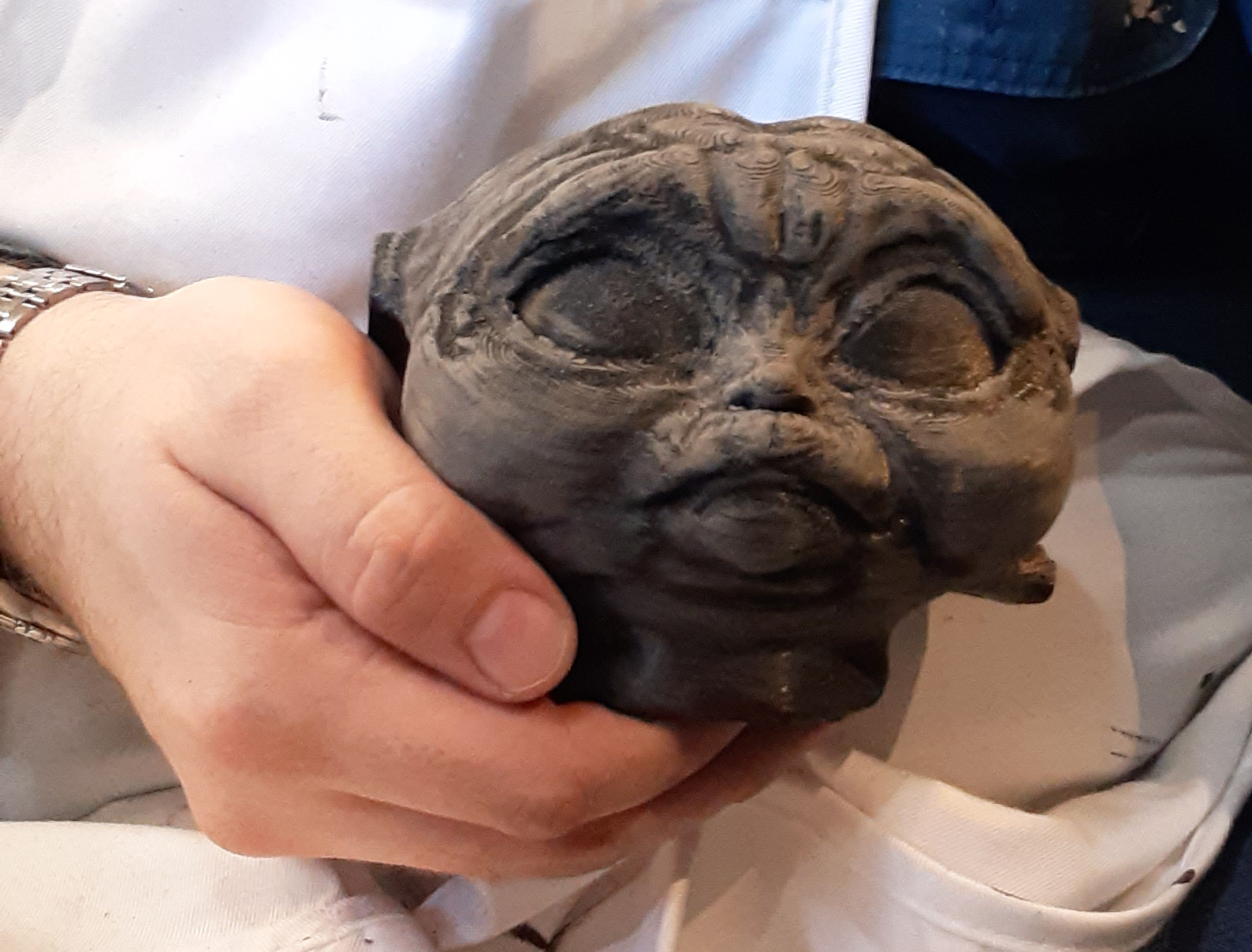 From there I made a jacket mold from Smooth-on Body Double, and then used that mold to do a liquid Monster Clay pour.

From there I moved into physically sculpting and refining. 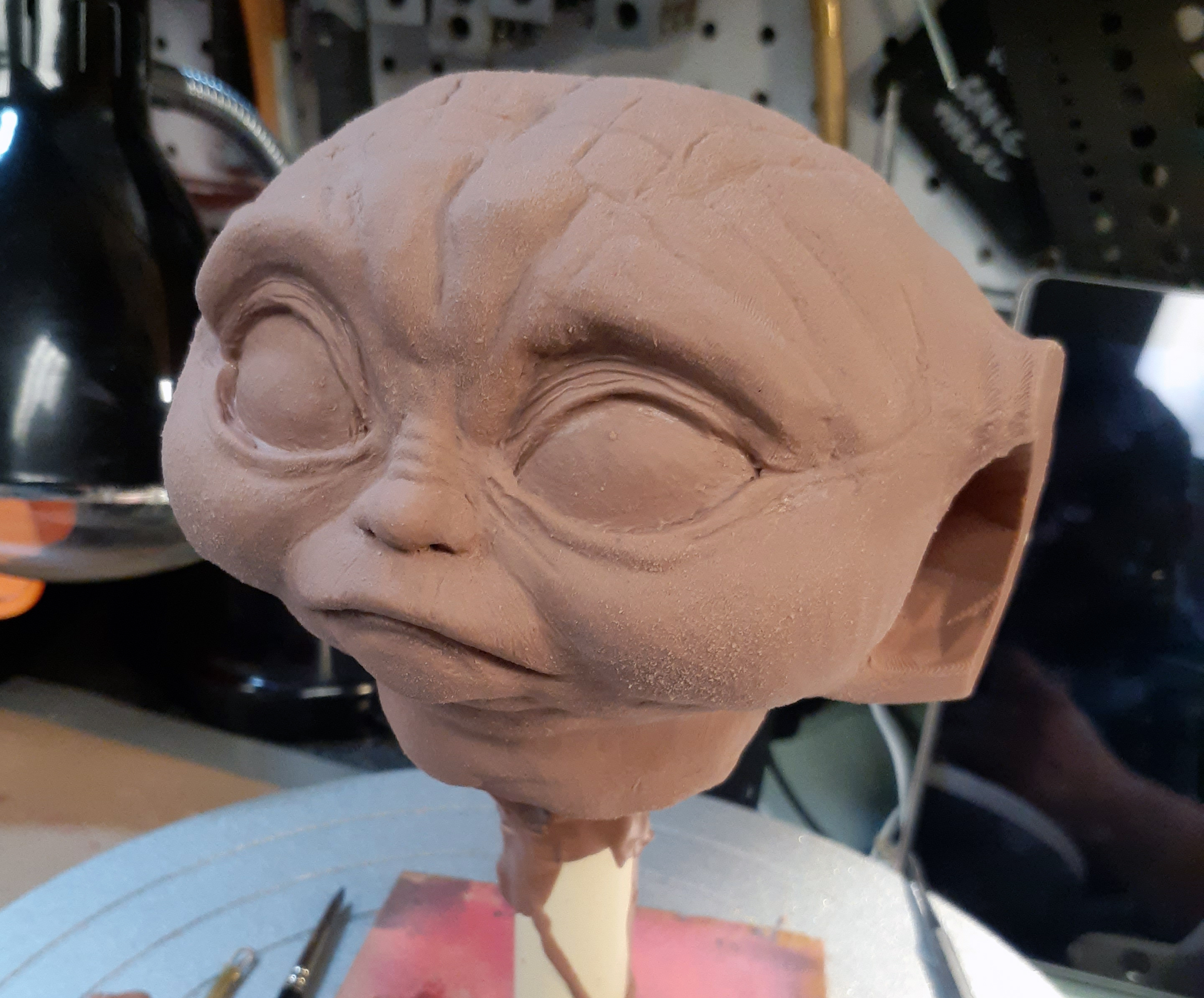 The ears were sculpted traditionally and initially my scaling was off, so I chopped them down.

I also was so excited to get sculpting that I jumped the step of installing resin eye forms to sculpt around, so I decided to core out the initial sculpt areas – add the resin bucks – and resculpt to try and get a better approximation. 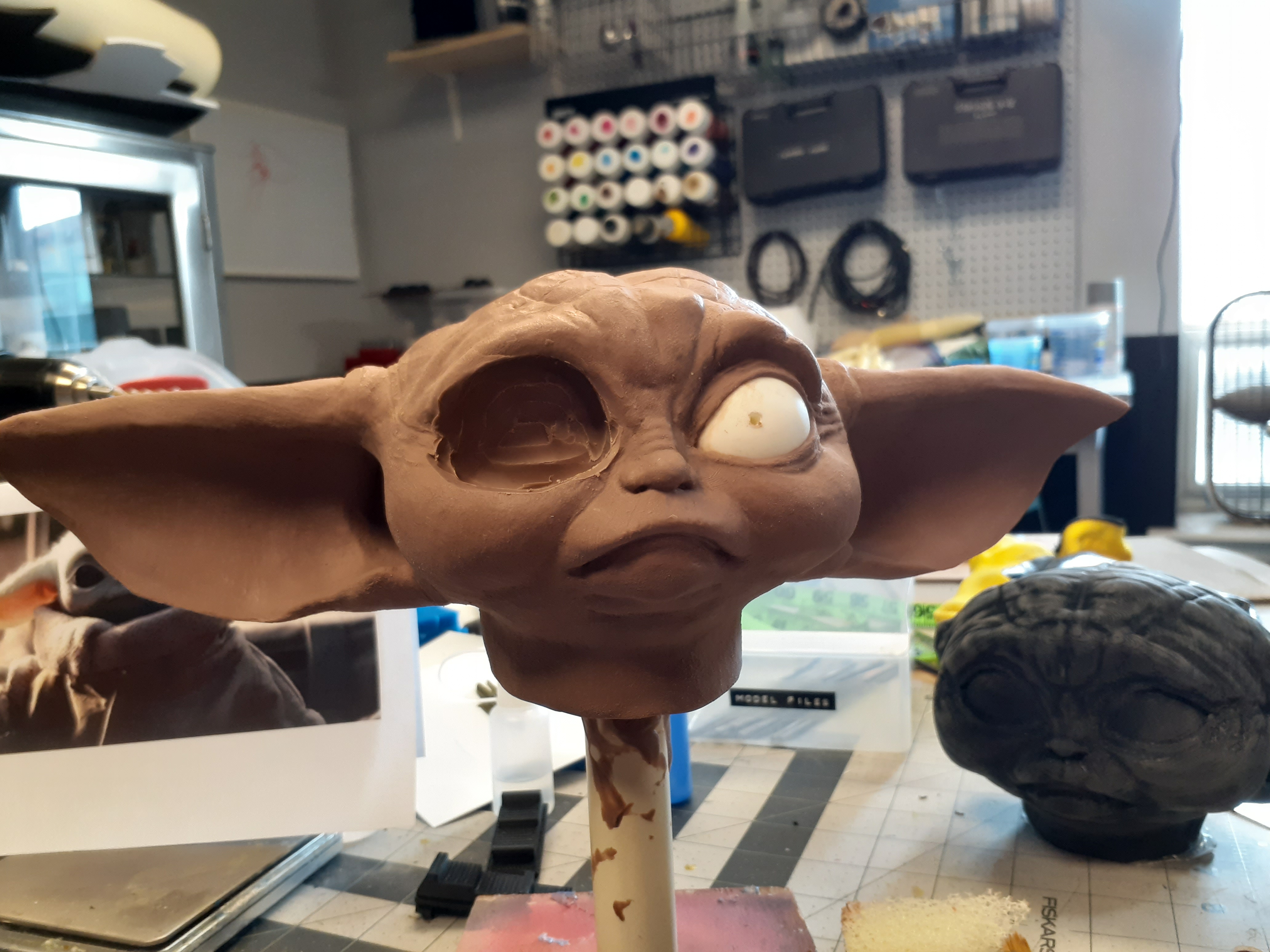 After texturing and what not, I painted the bucks just to make sure I was happy with the look. I think he’s ready to mold now. I’ll be separating the ears so that I can mold them independently from the head. 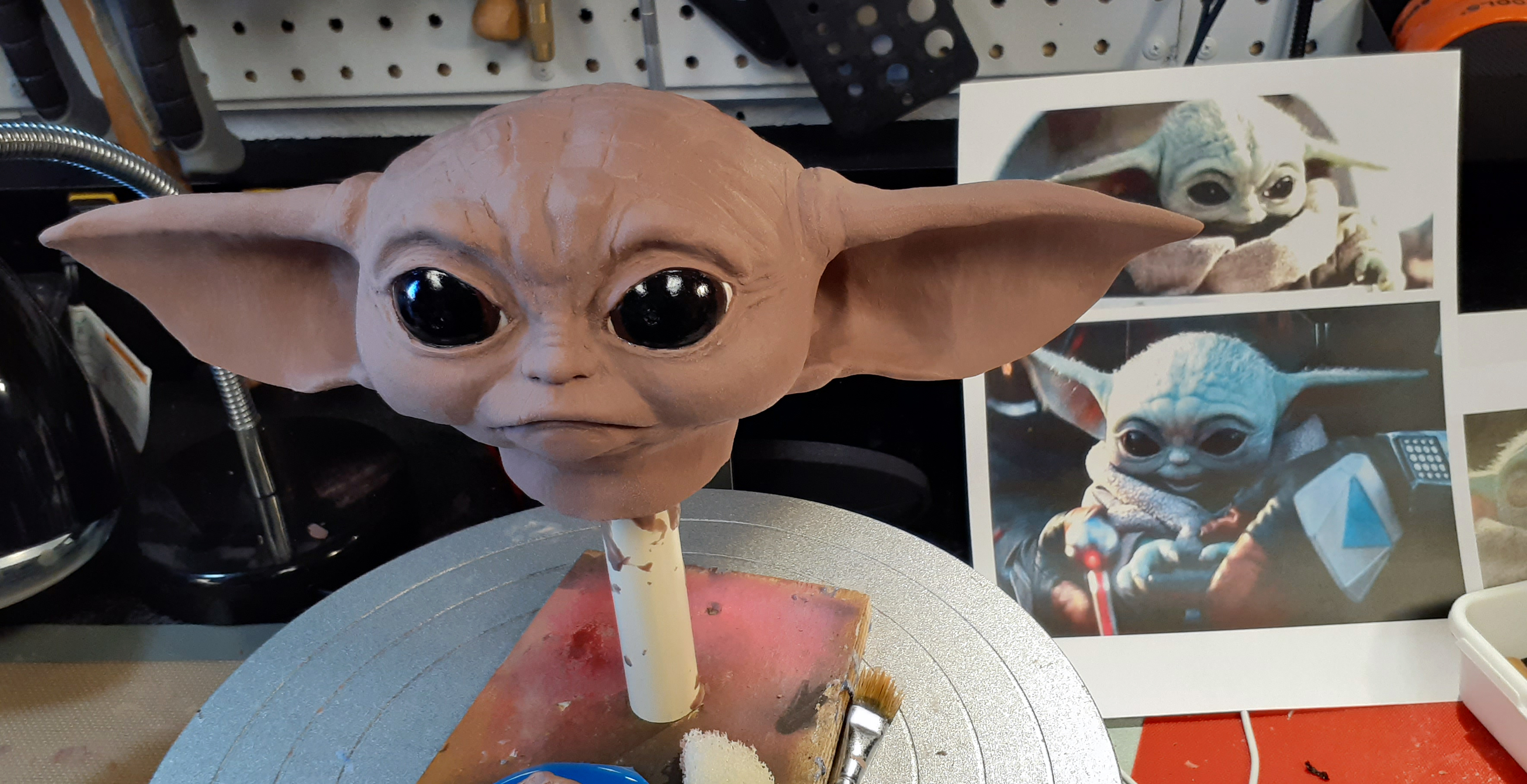 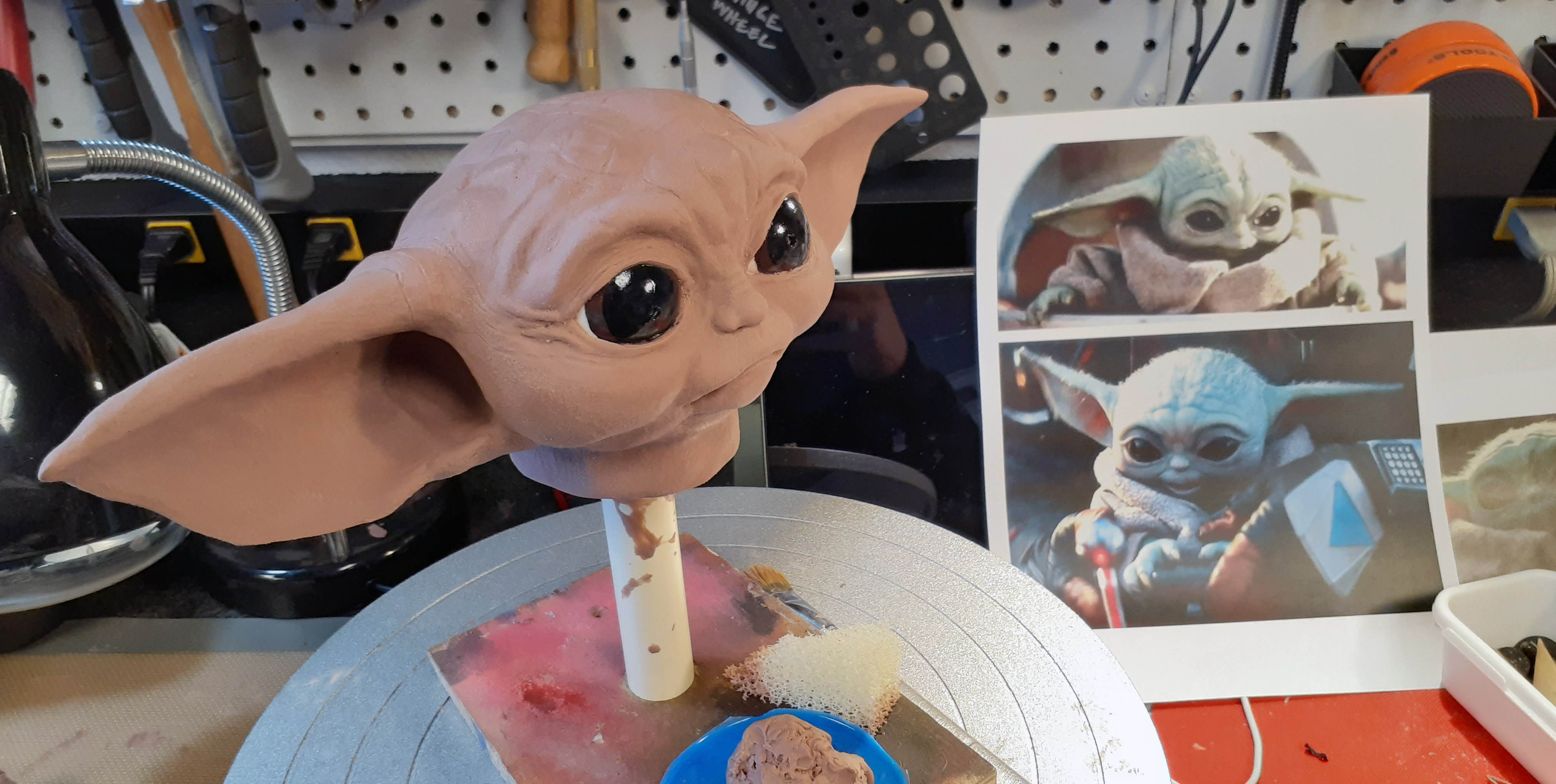 I also sculpted the hands/forearms, and have made indents for the nails, which I’ll add using translucent Primo after the parts are run. 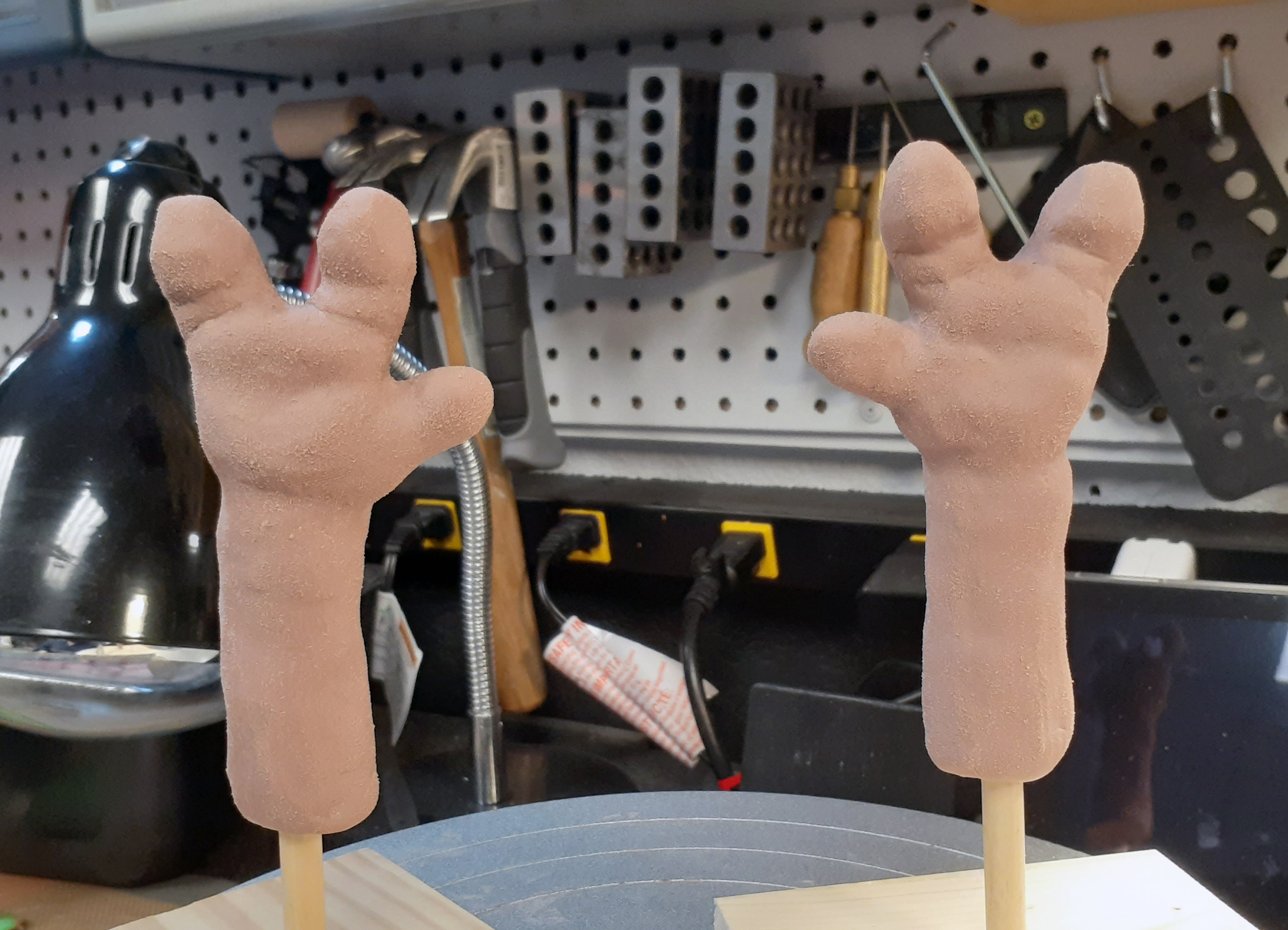 I’m going to be doing a 2-part urethane mold for the head so that I can cast his head, hands, and feet in silicon – FX Pro – tinted appropriately, with the head core backed in a soft polyfoam. I’m going the silicon route so I can capture that great ear translucency and overall look. He’ll be painted with silicon paints as well, and I'll be doing epoxy eyes and hand punching every little hair on his head and ears using soft Yack belly fur. I still have to sculpt the feet and do soft fabrication for the body.

But he’s off to a start!

That looks amazing! I look forward to seeing how this turns out!!

RPF PREMIUM MEMBER
This looks amazing!!!!!! I cannot wait to see where this goes. Subscribed for sure!! Nice work.

Wow, great job with the sculpt. The best one I've seen yet.

Are you going to do a run of these?

wow that's awesome, could you release the cad

RPF PREMIUM MEMBER
I might try doing a very small run after I get the first one worked out. They're going to be crazy labor-intensive, but I'll keep everyone posted!

That is awesome! I’m sure he’ll look even better green.

his eyes, I noticed on the show are brown. Which means he can’t be a clone as if he was, they would be green.

Though I think that the mouth might be too heavy/big.

RPF PREMIUM MEMBER
I'm still doing some revision work on the face sculpt, tweaking a little each day - I may thin the upper lip ever so slightly.

RPF PREMIUM MEMBER
The refining continues. Reworked everything trying to dial it in. Eyes, nose, brows, lips, and added mass to the top of the head. Feeling better about him now, and have started skin texture work.

I would say he’s probably at 90% likeness. You got the eyes down perfectly. The shape of everything looks great. Maybe look at his cheeks again. They seem to be a little bigger and they stick out further and hang out under the eyes more than the actual baby from the show. Does that make sense?

Yeah I would agree with molerat. It's getting in the vacinity but doesn't quite look right yet. The cheeks are definitely too bulbous. Also take a close look at how the ears connect to the head. His ears connect in a bit higher I think. Also make sure they are the right size. That's a major key to making his proportions work.

RPF PREMIUM MEMBER
Thanks all! I'm going to revisit the cheeks, I think that's what's been bugging me but I couldn't put my finger on it. I will be separating the ears for molding, so I'll be able to place them slightly higher when the silicon pieces are assembled.

RPF PREMIUM MEMBER
Cheeks redone, overall pore work done, next step is to cut off and relocate the ears a bit higher...

RPF PREMIUM MEMBER
Alrighty, I think I'm at a stopping point, I've reworked everything and feel he's in the 95% range, and I'm good with that. All texturing done, next step is to begin the mold process.

RPF PREMIUM MEMBER
Considering that it was a three man animatronic puppet on set, what you're doing is gonna be epic!

I've been seeing a lot of different "fan made" versions online, and it seems like the mouth area is a detail that's very hard to replicate. In almost every example it seems to be not quite right.