So for the past month or so I've been trying to lay out the Jedi temple. I figured it would be a quick build, but there turned out to be more complexity than I was expecting, and I'm a little OCD about accuracy. But behold! My progress so far. 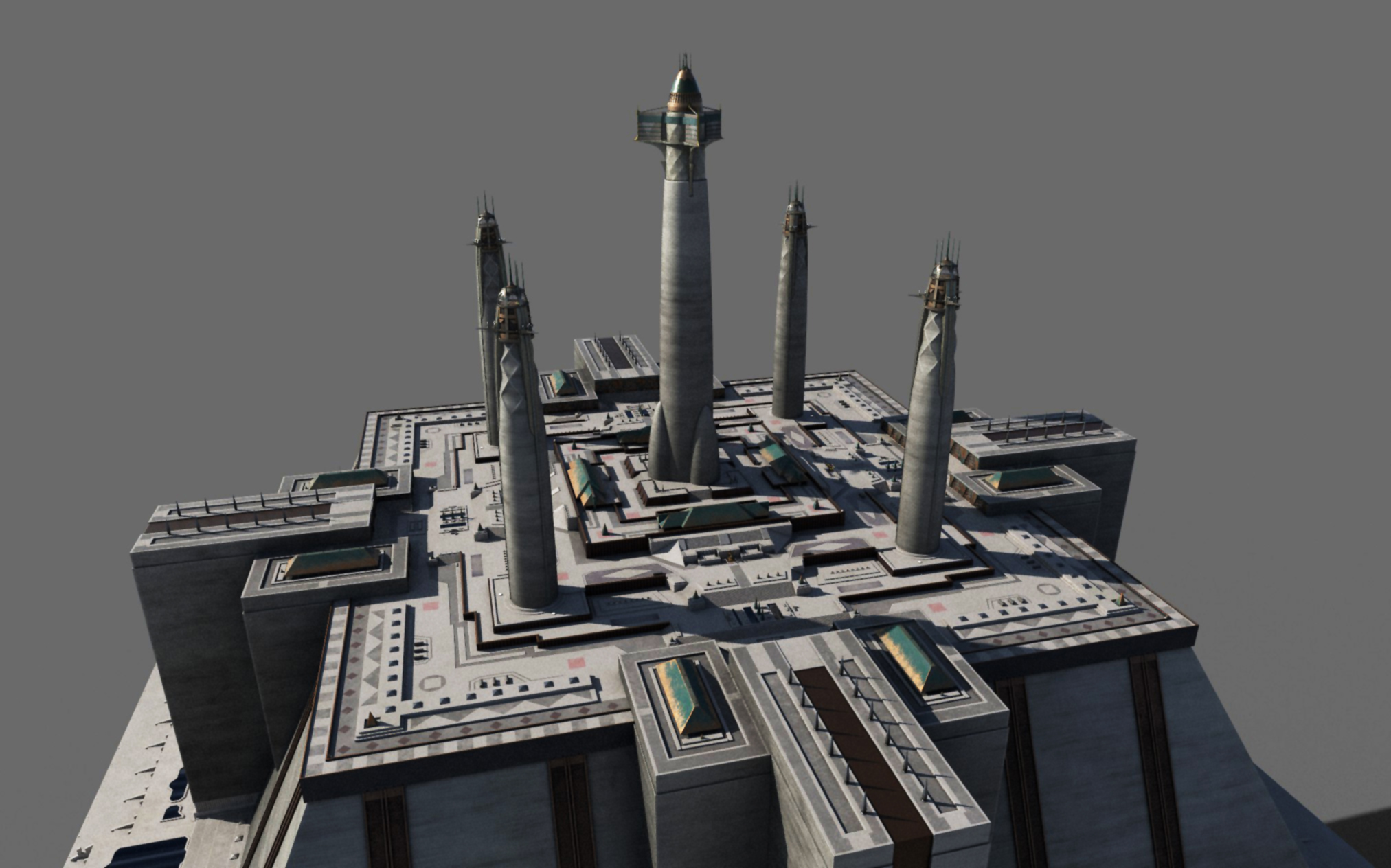 How big are you thinking you'll build it?
Studio scale would take up a lot of room. I recall the shooting model was around 4 feet square at the top.

I live in a tiny apartment, so I'm only building this digitally.

I've also built some sky traffic for when it's done... 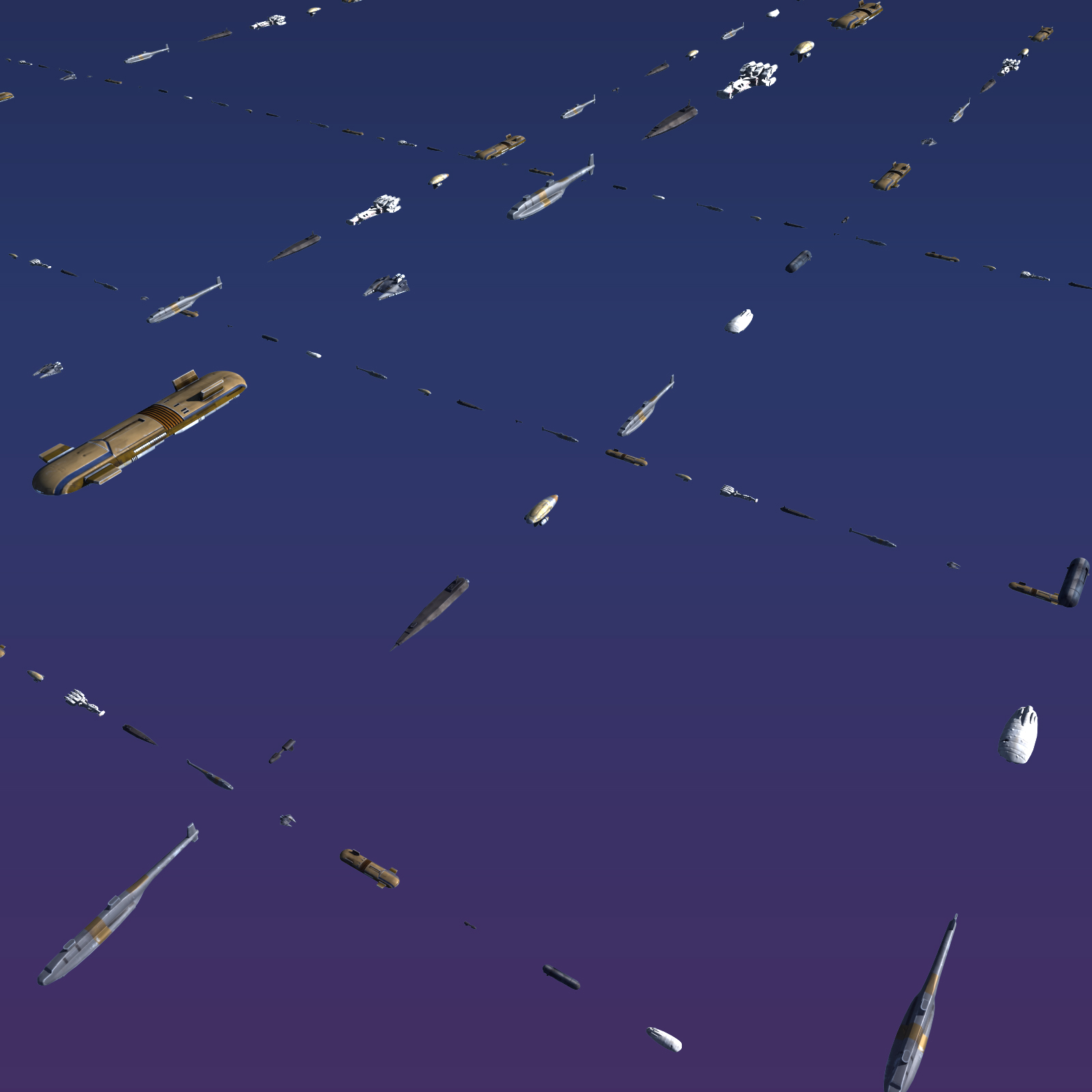 Still in progress, I think I've spent more time on the bottom than I did on the roof. So many different patterns and textures. 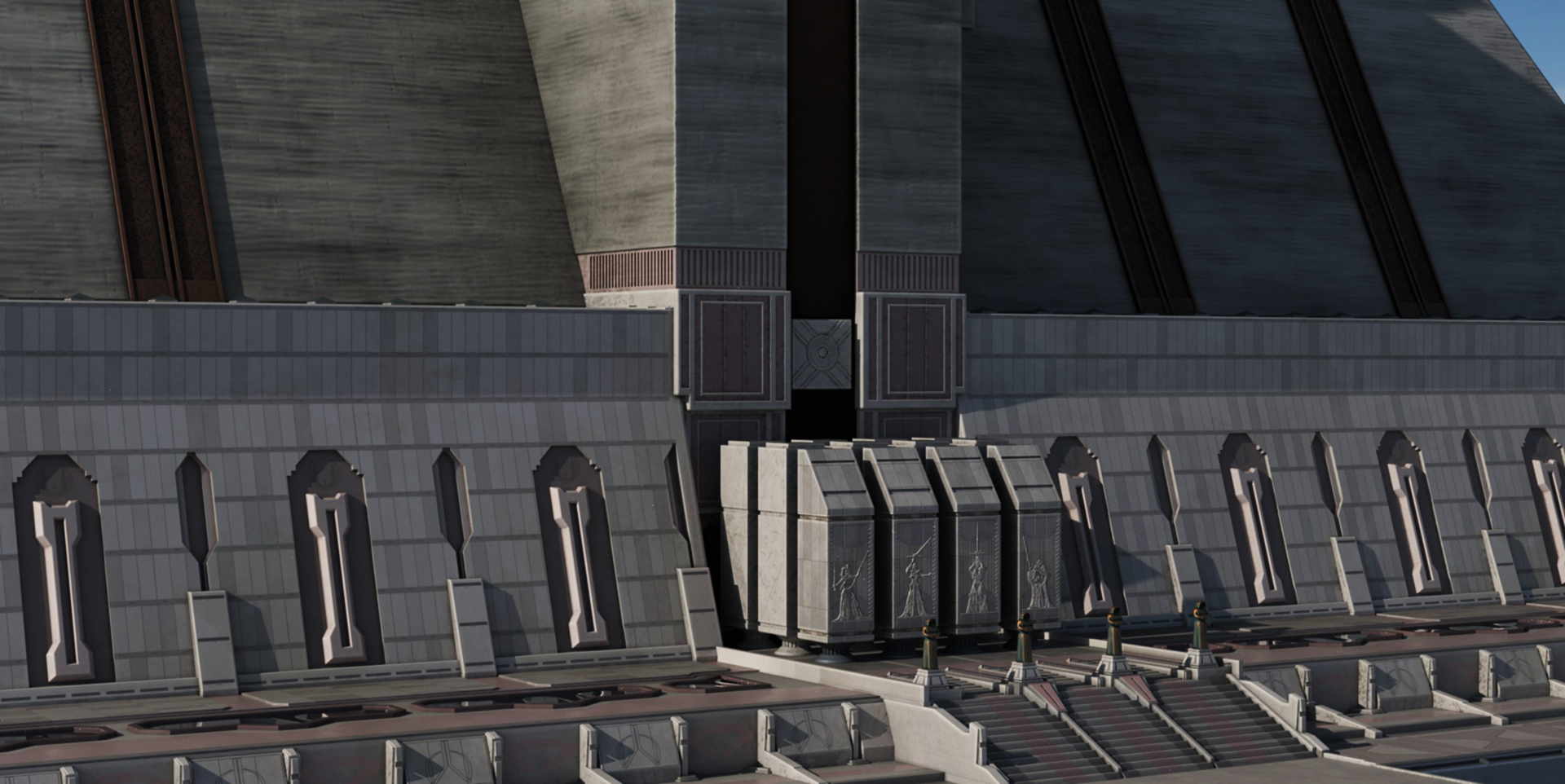 Always loved this moment at the end of Return of the Jedi, so I thought I'd take a stab at it. 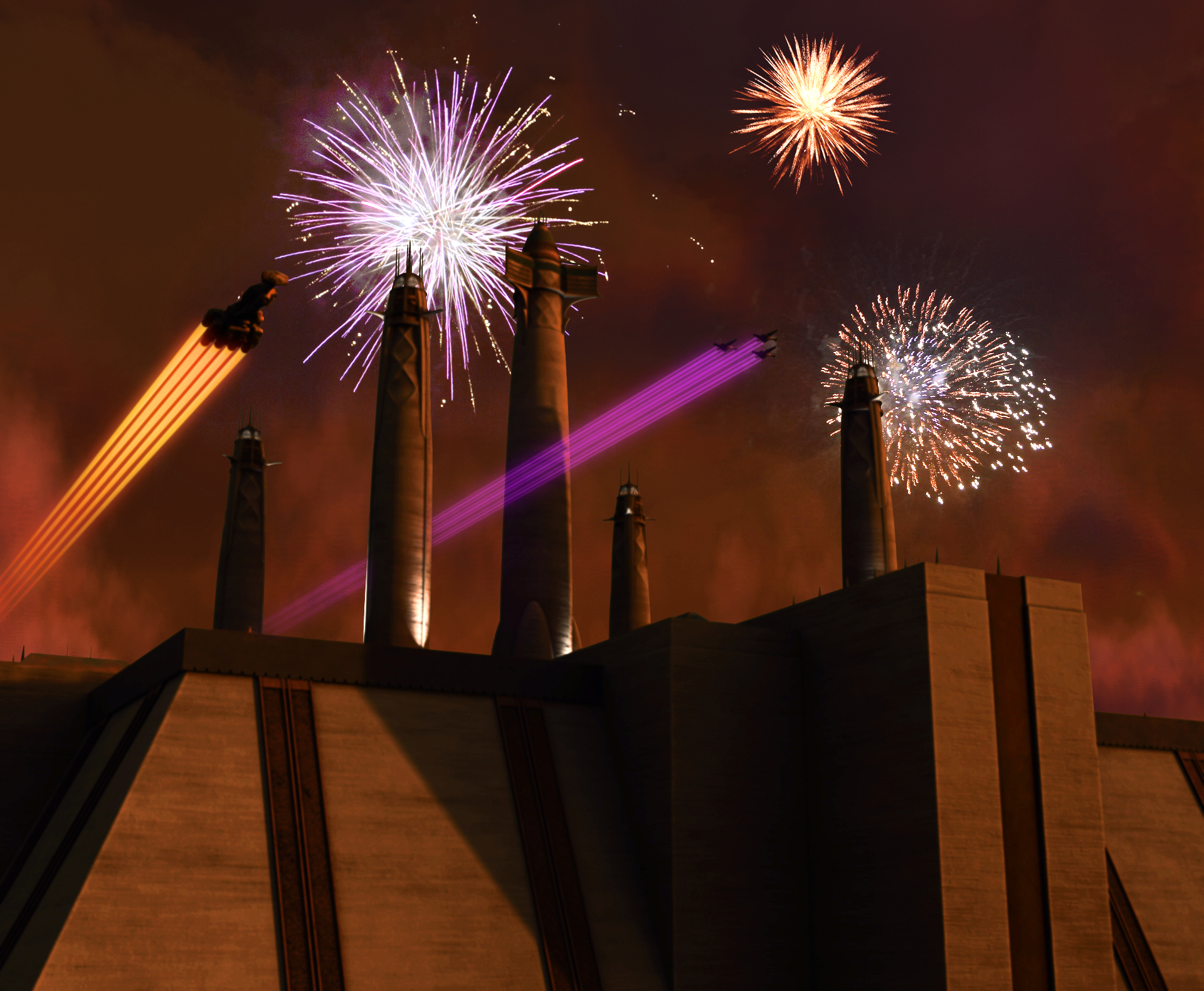 Finally finished the temple "District" the sort of plinth/city block the temple sits on. Interestingly, this part of the temple was only seen in revenge of the sith. Only the top of the temple existed in the phantom menace/Return of the Jedi, and in attack of the clones we never saw the temple from an angle to get a look at what it was sitting on.

So I did my best, but I ended up with some questions. The biggest being what the grand walkway coming out of the temple entrance actually leads to, since as far as I can tell that was the edge of the city block. In the clone wars, that walkway simply ended leading to nothing. I played with the idea that it progressed across the "street" gap across to a nearby building, but in the end the thing that made the most sense was just to end it with a circular landing pad. SW:TOR took the same approach in their renders of the temple.

In the distance/far right you can see a docking tower I threw together. this project is largely done now, but I've started building some of the surrounding city blocks so I can do sort of a downward facing wide shot. From these lower angles, you can't see the roof top. I went a little overboard there, I modeled the garden tree from clone wars, and tucked it into the only spot on the roof that seemed to match that area of the clone wars.

I started this project because I thought I would slam the temple together in a couple of weeks, but I've learned I'm basically incapable of not obsessing over details.

There are one or two areas of paint that could still use a little more detail. I may revisit those. Also I could not for the life of me find a good representation of the round temple seal, and the camera never really got close enough to it in the films, so I settled for the more generic Jedi Order Symbol.

Oh, and I hurriedly polymodeled (not sculpted) one of the four statue types found around the temple and said "**** it"instead of making the other three. 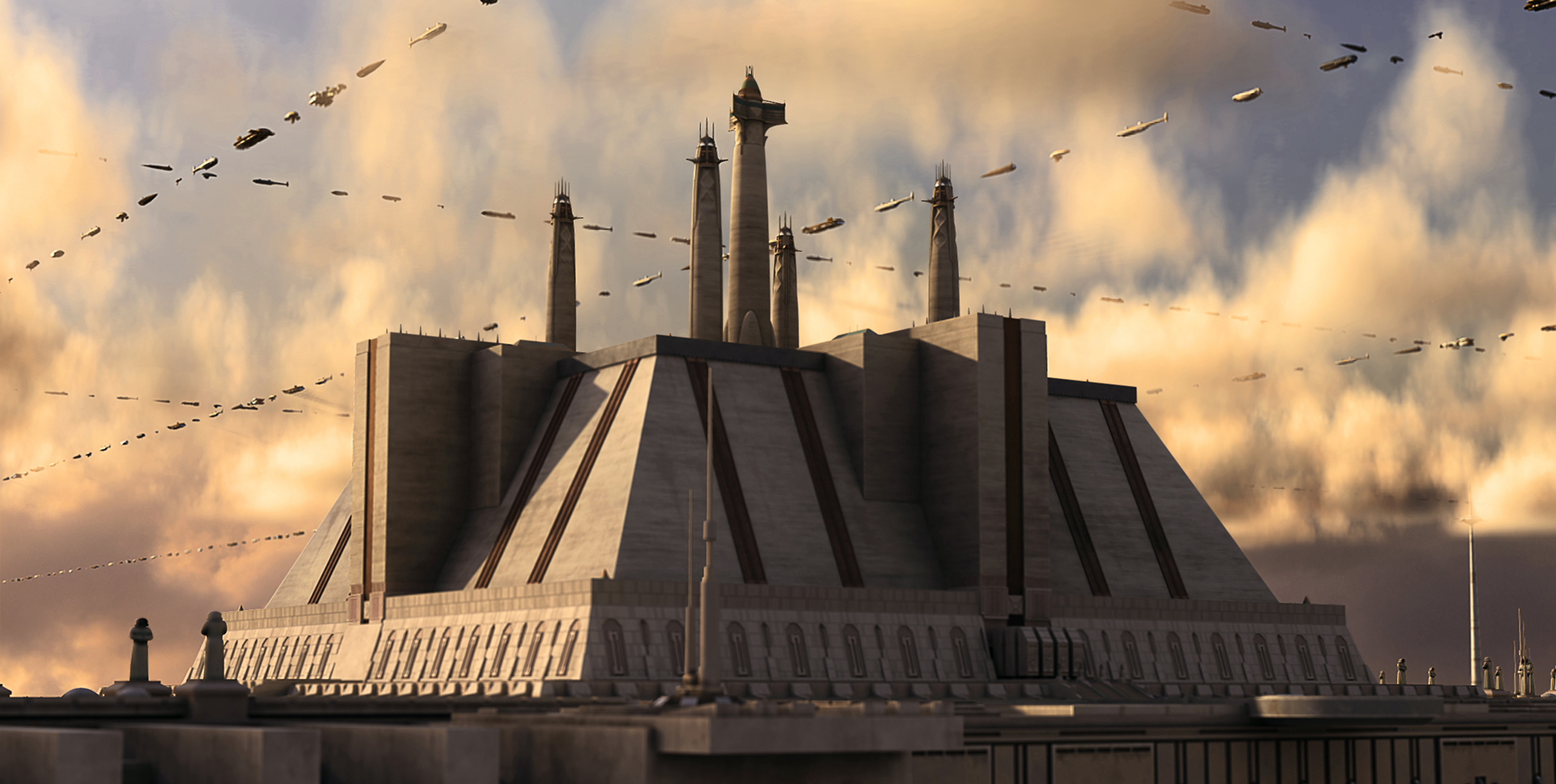