It took me quite a long time to finally join the Replica Prop Forum. I’ve been totally blown away by the work people are doing, and by the help and advice I’ve received in the very short time that I’ve been here. I’m especially interested in replicating items from The Expanse, which is currently my favorite show. At first I just wanted the stuff, and I asked a few people for help in re-creating logos and cutting vinyl so I could buy prop replicas. But I love making stuff too. So I don’t want to just pay people for the replica props that they’ve made. I want to try to make them myself. Doing that, and helping each other to do that is really what we’re here for.

So, inspired by all of you, and a couple of you in particular, I decided to start replicating props myself, and I’m announcing a big project I want to complete. My focus is drinkware, and bottles because I love the designs, and I love the practicality of them. They look awesome, but there’s also a utility to having a cool glass. I can pour from the same bottle as Miller, and drink out of the same glass, while watching the show. I can toast with some gin from the same bottle, with the same mug as the crew of the Rocinante. I absolutely love that.

I’m going to replicate as many of the interesting bottles, mugs, and glasses from The Expanse as I possibly can. I know this project is going to take a long time, which is actually a good thing. I started with the idea of replicating or purchasing found versions of every mug, bottle, and glass I see in the show. I very, very quickly realized that that would be unreasonable, and deeply cost-prohibitive. I saw three different whisky decanters and glassware sets in the background of a single episode. So I’m trimming my objective down to replicating the most interesting and significant items. That is, items that appear in particularly interesting scenes, are used by important characters, or have specific Expanse iconography and logos on them. There are also some instances where a logo is unclear. If it’s absolutely impossible to see something clearly, in order to accurately replicate it, I won’t stress over it. I’m still going to be replicating a lot of stuff.

Since this is such a big project - or at least feels big, with the 9 different items I’ve identified so far, just while watching season 3 - and is my first ever foray into prop replication, I started pretty small and simple with the MCRN mugs. 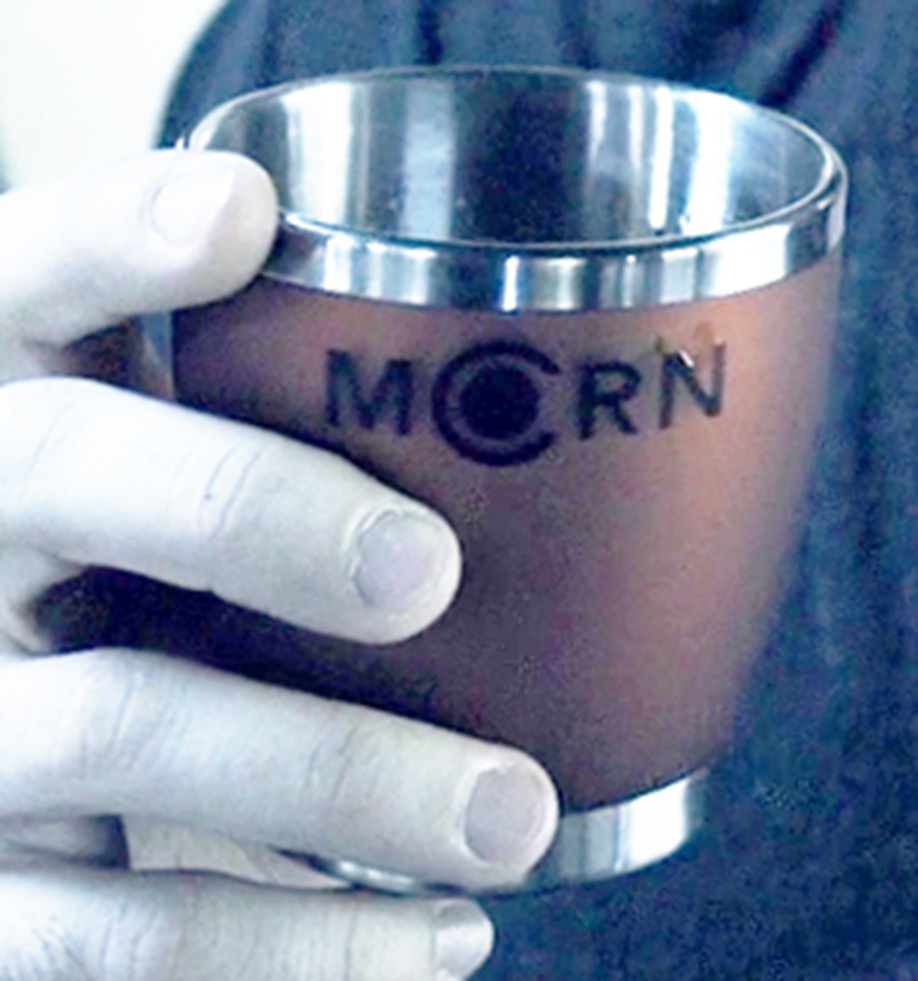 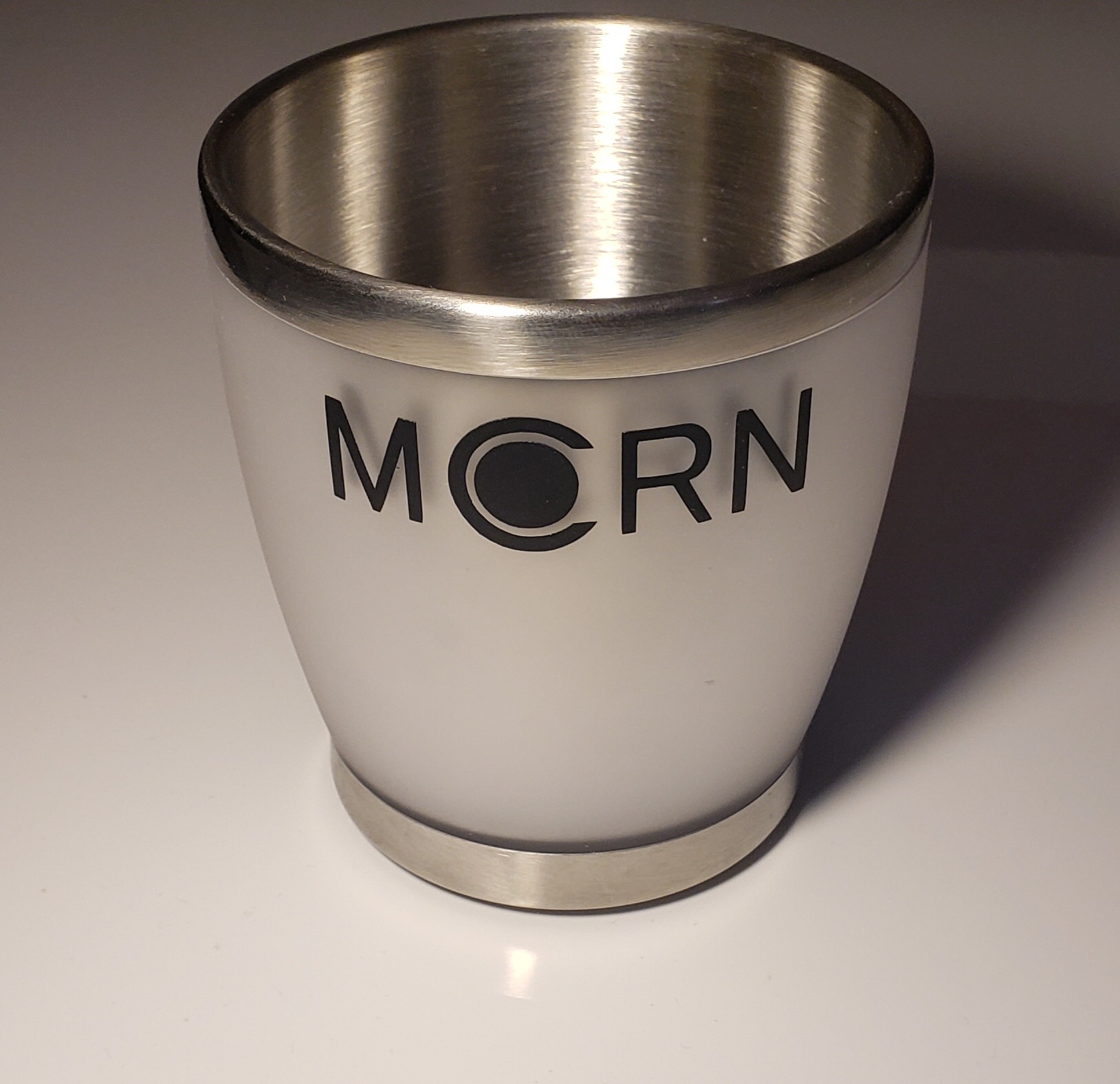 The letters other than the C were too tall, and I’m trying to be as accurate as possible, so I did some editing. 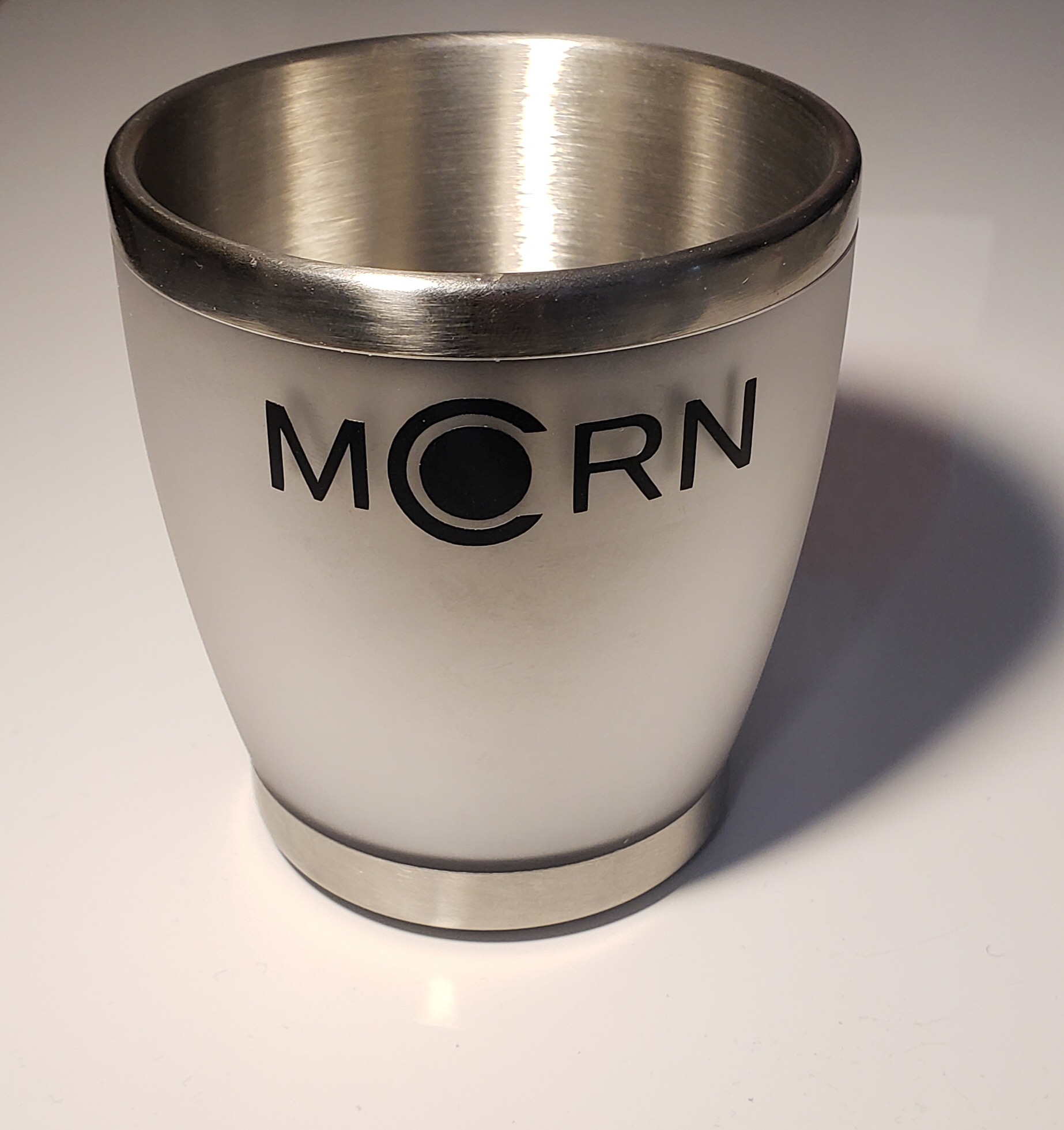 This is the Emsa City Cup, with die-cut permanent adhesive vinyl.

I’m really pleased with the result. I know there are a lot of versions of that logo online, with a lot of people selling stickers, but in the true spirit of The RPF, I replicated the logo myself in Illustrator and cut my own adhesive vinyl. I ordered more city cups, so I’ll have 2 red and 2 silver. This first attempt, along with the encouragement of users here, has given me the confidence to undertake the rest of this project. It’s awesome! Thanks, RPF!!

I’ll be posting updates to this thread with screenshots of the next items I’m working on, and then a photo or photos of the finished product. If I get stumped or need help working on something, I won’t hesitate to ask.

Any and all coments and feedback are very strongly appreciated. And thanks to the RPF members for being so welcoming!

Those look great. I love the Expanse!

I noticed that a few items like some glasses were available on Amazon and then could just be laser engraved so that might save you some time.

I also noticed that Avasarala's (sp?) desk is the one of the Victor desks from Victor Desk – Elite Modern which also appears to be the same one used in Star Trek Discovery.

Polygonix said:
Those look great. I love the Expanse!

I noticed that a few items like some glasses were available on Amazon and then could just be laser engraved so that might save you some time.

I also noticed that Avasarala's (sp?) desk is the one of the Victor desks from Victor Desk – Elite Modern which also appears to be the same one used in Star Trek Discovery.
Click to expand...

Yeah, I saw a number of etched glass items too. I considered and looked into using stencils and etching paste, but it seems like it might not give the best result. So I’m also looking into local glass etching services. While I’m investigating that information, it’s not for the next item I’m already working on, which I’ll post more about soon.

Good find, on the desk! I don’t have room to start buying furniture, but I actually noticed that desk and thought it was really cool as well. You might post that information in The Expanse Props & Found Parts thread. That thread is kind of a repository for identifying props and parts in The Expanse (as well as showing people’s replica work), and has been extremely helpful, and really inspired this project.

I'm not really doing these in any particular order. Because I just re-watched the whole series, I have season 3 on the brain. So I decided that the next item I replicate will be the U.N.N. Flagship Agatha King Mug. The mugs show up in a scene where the props department decided to plaster the Agatha King logo on pretty much everything. The glasses, the napkins, what look like cream and sugar containers I guess, the wall and the floor.

I might track down the glassware and have it laser engraved with the same logo later, but for now my focus is this mug. 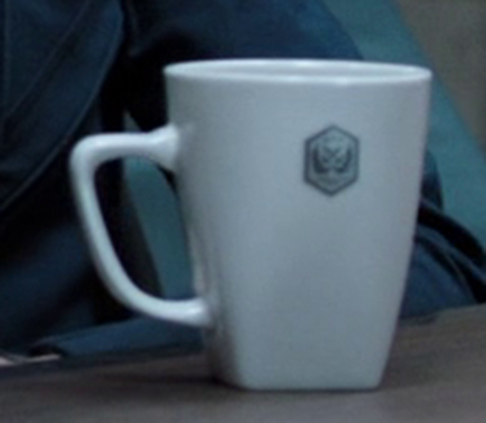 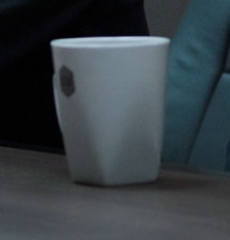 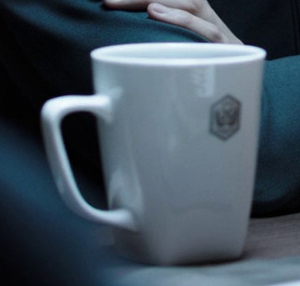 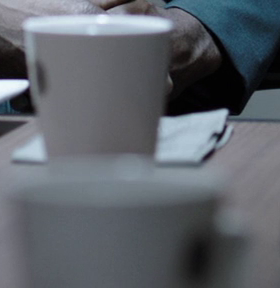 You can see from that last image that the Agatha King Logo is present on both sides of the mug, the same as the glasses.

The mug is the "Better Homes and Gardens Loden Porcelain Square Mug." I ordered mine on ebay, and they're on their way, scheduled to arrive today. The same mug is used on the U.N.N. Thomas Prince, so it must be the standard mug of the U.N.N. I'll be working on and posting the Thomas Prince Mug later as well.

Although the logo is everywhere, there are very few clear shots of it, at least in this episode. The best view we get is on etched glass. I composited several screen-shots and adjusted the image to be able to see the full logo as well as possible.

I'm about 90% done replicating the logo.

I'd like to sublimation-print them, but these mugs aren't coated properly for sublimation, and I have neither the printer, the paper, nor the ink for it. A custom mug of this type would require a bulk order to have someone else print it, which is prohibitively expensive, even if I sell the rest. So I'm going with heat-transfer vinyl. I'm going to buy heat wraps that keep even pressure on the mug for a better transfer, so I can do them in the oven. If that fails, I'll use a heat-gun, which is a bit finicky, but I know does the trick.

I'll update when the mug is complete. As always, comments and advice are very welcome!

RPF PREMIUM MEMBER
Anyone notice the BTTF/Alien Krupps coffee grinder behind Cotyar when he's in detention on The Agatha King in S2?

Birdie said:
Anyone notice the BTTF/Alien Krupps coffee grinder behind Cotyar when he's in detention on The Agatha King in S2?
Click to expand...

Good eye! I didn’t notice it, but definitely going back to check it out now. I was just reading a thread asking for advice on removing the Krupps logo without damaging the plastic!