SPOILERS AHEAD for The Elder Scrolls III: Morrowind. If you still wish to play Morrowind, this thread contains plot spoilers for the Main Quest. PROCEED WITH CAUTION.

All the hubhub about Skyrim got me thinking about doing some Elder Scrolls props again. The only problem with that is that the games are so huge, it's really difficult to choose one prop in particular to make. Do you make a weapon you used in the game? That shield with the awesome enchantment? Do you make the bow you killed your first dragon with? The problem is that there are so many items to make.

So, like some of my colleagues have done with the Dovahkiin helmet, I've selected an iconic prop. The issue is that I have a few other projects behind the scenes that I'm working on finishing up, including repairs to a prop one of my friends managed to destroy two days after he got it, so I don't have a either time or money in excess. So, I picked something simple, small, easy to make (for me, anyway), and is a subtle nod to the best game I've ever played: Morrowind. It's also a prop I can use every day; it's a little window into the world of Morrowind that I liked so much.

I chose to create the Moon-And-Star Ring which was so integral to the storyline. 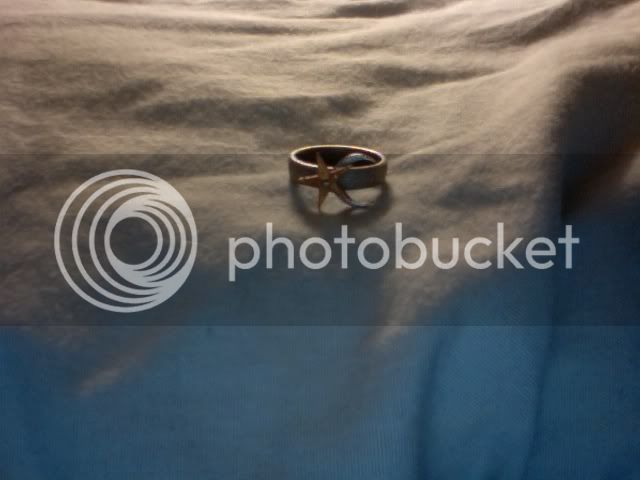 The thing's so small, it's hard to photograph well.

Why this prop, you might ask? Well, I'll provide a brief summary of the game's plotline and why this ring is so important.

Something Bethesda has always done well with their games is to write a convincing backstory; create a world with its own history and mythos. Morrowind, while an early example of their work, is no exception; the stories you hear take place eras before the events of the game.

The most important story for our purposes, however, is that of Nerevar and the Battle of Red Mountain. Nerevar was the King of the High Elves of Morrowind, and he, along with his wife, Almalexia and his friend, Lord Dagoth, fought a long, grueling war against the invading Nords of Skyrim. The war was so draining that Nerevar forged an alliance with Dumac Dwarfking, the Lord of the Dwemer, a race of Dwarves. The Dwemer and the Chimer (High Elves) had been warring for centuries, but due to the threat of Skyrim, the unlikely alliance which formed the First Council eventually expelled the invaders.

For a short time, peace reigned supreme, but soon, Nerevar learned that deep below the ground, the Dwemer were creating a superweapon; a biological terror built around the heart of a god, Lorkhan (the equivalent of Loki; the trickster). How Lorkhan lost his heart is another story, but for our purposes, Nerevar believed it was too powerful for the Chimer and the Dwemer to use, so he believed it was destroyed. However, the Dwarves kept it secret, and planned to betray their allies at the earliest opportunity with its power. Upon this discovery, war broke out again.

The final battle of the War of the First Council took place on the slopes of Red Mountain, a high volcano in the middle of Morrowind's main land mass. The battle raged for days, but at a sudden break in the enemy lines, Nerevar and Dagoth entered Red Mountain itself with a small raiding party. They encountered Dumac, who with his chief engineer, Kagrenac, was engaged in a ritual upon the Heart of Lorkhan - intended to strengthen the Dwarves in their hour of need. Nerevar fell upon Dumac, and after they fought, Dumac fell. Kagrenac, seeing his Lord fall, made his attempt on the Heart - but it backfired, and all the Dwemer on the continent suddenly vanished, never to be seen again. The war was over.

The next part of the story differs between sources. Some believed Nerevar was badly wounded by his fight with Dumac; others believe that Dagoth struck the mortal blow. As Almalexia entered Red Mountain with two of Nerevar's generals, Vivec and Sotha Sil, they found Nerevar dying in Dagoth's arms. Nerevar's last words were to guard the tools and to never let the Heart be used again.

Of course, that's not how it ended. Leaving Dagoth to guard the tools, the other three went about their lives. Several years later, it became obvious that Dagoth had in fact experimented with the Tools of Kagrenac, so the three either killed or banished him; it's unclear. Overcome by a lust for power, these three - Almalexia, Nerevar's wife, and his two trusted generals, Vivec and Sotha Sil - used the tools successfully on the Heart, violating Nerevar's dying wish, and became living gods. They would become known as the Tribunal.

Nerevar's most prized possession, his Moon-and-Star ring, was never found. It offered him supernatural powers of persuasion, which was, as some claimed, the reason that the First Council formed at all. In any case, the Tribunal ruled over Morrowind together for thousands of years until, one day, the Nerevarine - Nerevar reborn - returned to Morrowind.

After many hours of questing, the Nerevarine - Morrowind's player character - discovers this story. The character then is told he must go to a place called the Cavern of the Incarnate and reclaim his identity, once and for all. Nerevar had placed a powerful curse on the ring which killed any but him who wore it - so wearing Moon-and-Star would be proof of identity. After meeting one of the true gods of Morrowind, Azura, the player character is bestowed with Moon-and-Star - and proves they are the Nerevarine, the only person capable of defeating Dagoth Ur - the reborn Lord Dagoth, evil exemplified in Morrowind - and restoring peace to Morrowind.

So, if that made any sense to you, that's good. If not, well - it's kinda like explaining the significance behind the One Ring in five paragraphs. You really have to have played the game to fully understand the significance of the ring.

Anyway, that's why I wanted to make this ring. It's an unforgettable part of the story, and a powerful artifact in the game to boot.

Here's the one ingame, again, compared to mine.

I think it turned out well. Shapeways is a good tool, if you know how to use it. This one's actually two parts; the silver section is all one piece, and the gold star fits on a pin on the silver part:

For a scale idea, here's a shot of it next to a USB flash drive:

I'm pretty pleased with how it turned out. I'm a big fan of Morrowind, and this is one way I'm able to be a part of the world I participated in so much.

Thanks for looking, folks!

When you said 'iconic prop' I thought there was going to be a broom, since I believe all of my characters across the gaming board collected them 'just in case'.

You did a wonderful job on the ring! And it cases of emergency I'm pretty sure that moon could serve as a weapon by itself. A lovely addition to the Elder Scrolls prop universe.
V

Yeah, the moon's pretty sharp. I'm a little surprised it printed so well, but hey - it worked out. The star's a bit shinier than it appears in these photos, too.

Very cool! Morrowind has its own style in looks, and this ring captures that very look. NOt as LOTR as the later TES designs. Great idea and build!

Thanks. Morrowind really did have its own feel, and this is just a small, simple build that kinda captures that atmosphere.

Not really. The issue is the size; getting it any closer to the camera means it gets fuzzy, out of focus. I can post the original renders, though.

Would love to see the render. Are you doing anything else from morrowind?

I have Sunder and Keening on my bench right now. Well, more of Sunder than Keening, but you get the idea.

Is the ring for sale on shapeway or are you thinking of selling some?

It is on sale on Shapeways... but I think I effed up the file last time. I need to go in to work to get access to the program; but I can sell this, if you're interested.

The file is now working. Some things to note:

-The ring is roughly a size seven. I tried to size it at eleven, but for some reason, it came out much smaller. It fits my pinky finger, or almost all the way up to my second knuckle on my index finger.

-The star cannot be printed in any metal other than silver, due to the size of the small details. I painted an ultra-detailed plastic one for mine.

-Due to tolerancing, the star may not fit over the pin in the ring effortlessly. I broke one of mine, but after a spare arrived in the mail, I filed down the pin with a metal file, so it now fits properly.
Last edited: Dec 29, 2011

Jm419 said:
The file is now working. Some things to note:

-The ring is roughly a size seven. I tried to size it at eleven, but for some reason, it came out much smaller. It fits my pinky finger, or almost all the way up to my second knuckle on my index finger.

-The star cannot be printed in any metal other than silver, due to the size of the small details. I painted an ultra-detailed plastic one for mine.

-Due to tolerancing, the star may not fit over the pin in the ring effortlessly. I broke one of mine, but after a spare arrived in the mail, I filed down the pin with a metal file, so it now fits properly.
Click to expand...

Guess i need to figure out what ringsize i have.
Is the pin round? Maybe it would fit better if you made it and the hole square instead!.
I would like to see the render of the star. On the game version it almost looks like there is a diamond or other stone in the middle.

I'll have the render for you on Tuesday - of both parts and of the assembly as well. The pin is round, yes; and on the game model, it appears to be almost a screw head. I can see a faceted gem, as well, but it won't print with such small detail. It's a domed hemisphere, which is already at the tolerance limit for size.

Jm419 said:
I'll have the render for you on Tuesday - of both parts and of the assembly as well. The pin is round, yes; and on the game model, it appears to be almost a screw head. I can see a faceted gem, as well, but it won't print with such small detail. It's a domed hemisphere, which is already at the tolerance limit for size.
Click to expand...

You could make the star with a small indent instead, where you could place a gem later on.

That's true. The star does have a hole in it, so if you wish to do that, I can make a shorter pin version for you.

I did some experimenting with the materials here; this is the best match to my stainless steel ring.

And the star, in gold.

So, here's what it'll look like (kinda) if it's printed in steel:

And the same thing in silver (a bit too rich for my taste):

Ah, now i understand what you meant with the pin.

Yeah. I can trim it down if you'd want to put a gem in it.