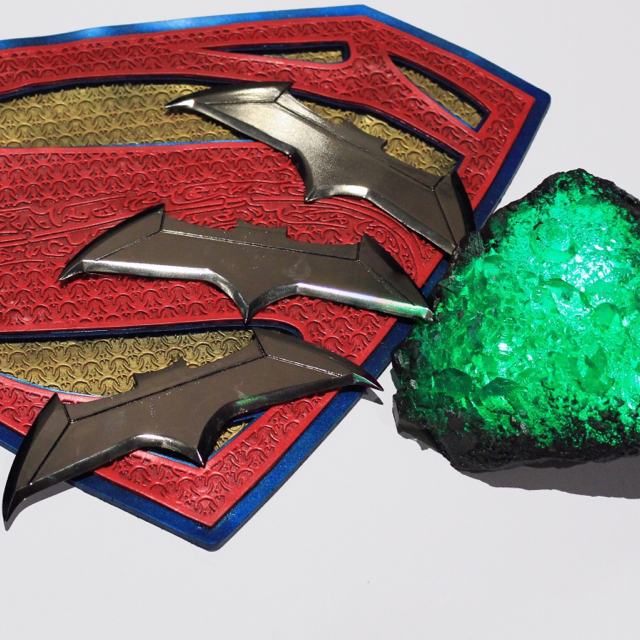 Where did you get that Kryptonite?


teragon said:
Just a little peak of what we've been working on lately
View attachment 621200
Click to expand...

Hey where did you buy the Kryptonite?? looks reall good


Iggy101 said:
Hey where did you buy the Kryptonite?? looks reall good
Click to expand...

Agreed. Where did you get that Kryptonite? Looks great.
R

What is everyone using for their gloves and how are you guys attaching the knuckle pieces?


Anakinos said:
Agreed. Where did you get that Kryptonite? Looks great.
Click to expand...

Still looking for the fabric. We know what we need, we just have some trouble actually finding it. Everything else is lined up and ready, except the design that was a bit delayed due to my exams. Essentially we need to have this done before end of July anyway, that's our deadline.


Russ Pumpkin said:
What is everyone using for their gloves and how are you guys attaching the knuckle pieces?
Click to expand...

I couldn't find a perfect match for the gloves, so I spoke to our Indy Magnoli here about making some. He's got some stuff to finish first, but he's willing to open an interest thread soon, so keep an eye on the classified section if you screen accuracy is what you want. Otherwise, some simple black leather gloves would do I guess. Oh and locite gel works well to glue stuff to leather, such as the knuckles.
M

found this on etsy:
https://www.etsy.com/listing/400755653/batman-v-superman-knightmare-trench-coat?ref=pr_shop

Excited to see what magnolia puts together!

Yeah me too, although he had a few things to take care of first before he could tackle this. Now in the mean time, that cape of yours is truly awesome ! Still drying at the moment, and I'll have to go ever it one more time with a wet rack to remove the last traces of powder, but as soon as it's done, I'll take a pic of it mounted !

First post updated with the first look at the new JL suit.

Dont know a damn thing about this suit, so it'll be fun "guessing" with the lot of ya...

RPF PREMIUM MEMBER
it looks good. there's little changes but not much.

Dont know a damn thing about this suit, so it'll be fun "guessing" with the lot of ya...

RPF PREMIUM MEMBER
Well, the general pattern of the body suit is globally the same, it's also the same tire track texture on it, but I can't tell if it's really darker than the BvS suit or not. In some instance, the BvS suit did look dark as well. Other than that,it seems they added the armor plates between the muscle suit and the fabric layer, added some kind of armor plate on top of the same gauntlets, and the cowl has quite a few differences too. The rest looks the same, belt, boots and cape...

It looks like they left off the gold highlights and blue shadows from the BVS suit. I wonder if the JL photo was an unfinished suit, or if they won't be painting the fabric?
The fins on the gauntlets also have a much more aggressive shape. More like the Begins gaunts. This can be seen in the trailer when batman drops down in profile.
I'm not entirely sure the tire track pattern is the same as it looks very sloppy in some photos. We'll have to see better pics of it to tell for sure though I'm fairly certain it isn't fabric from Ironhead's run.


Overall, the whole suit seems to be missing Jose's touch. At least Wilkinson finally got the hard edge design he wanted..

Didn't ironhead make this costume then? if not who did? im not really a fan of it tbh, especially the cowl.
V

The cowl is definitely more "Nolan-y" with the eyebrow shaping, and the overall curvature of the head. It's sleaker, almost reminding me of the Daredevil Netflix Season 2 cowl in how much it's curved.

The suit itself looks like they took the pattern of the BvS one and then just put additional patches on top of it, to lend itself a more "Armoured" look to match the Injustice Stylings of the rest of them. Which in my opinion is a shame, I was really liking the BvS/Comic styling, instead of the usual Batarmour we get in the movies. Shame that BvS is our High water mark on comic styling thus far. It also doesn't really make too much sense because while in BvS they establish the cowl is armoured, the suit was supposedly meant to be more "guy in a suit" than "armour" so adding patches on top, and so scattershot, really makes it seem almost like Bruce just had patches to cover holes, and put them on strategically so he could feel armoured as well.

The belt seems to be the same, as do the boots. The Gauntlets look to be the same base pattern from BvS, but with additional strapping and armouring. I disagree with MMM on the finshape change, I think what you're seeing there is the gold edging on the fin glinting in the light, but we aren't seeing the inside line so it just looks like it has a strut back. I think it's still the slanted rectangle-ish shape from BvS.

Like what they've released of the Batmobile pictures, it looks like they took every part of BvS, and just sort of put more stuff on top of it. Like Bruce is just upgrading his suit as he goes. Which makes sense, but I wish they were doing it in a better way, because I feel that this design is busier than the last suit, which for all the films flaws, was a great suit.

brucebatman said:
Didn't ironhead make this costume then? if not who did? im not really a fan of it tbh, especially the cowl.
Click to expand...

A team in London did the costumes... Ironhead sent their molds over but other than that they had no involvement in the costumes.

Who makes the best BvS and Knightmare Batman costume pieces?

The Batman 2022 Batmobile and Batsuit in person
2

Wednesday at 6:39 AM
batguy
B
I
What chain does joker have in The Dark Knight?