Good day all. I'm here to share my collection of vintage appliances based on those featured in the 1987 animated film The Brave Little Toaster.

I was surprised that there weren't really any other threads about this movie, except for one where a user featured their replica of the titular Toaster character. But nothing else about the other 4 main character appliances. I'm here to change that.

I guess technically these aren't so much prop-builds, but rather just prop collecting, since for most of them I had to do very little customization work, with the exception of Radio. But I'm interested in getting your feedback on what I have so far.

Here are two pictures of all 5 together. The former is before I finished restoring Radio, so his paintwork is much shoddier and he lacks an antenna. 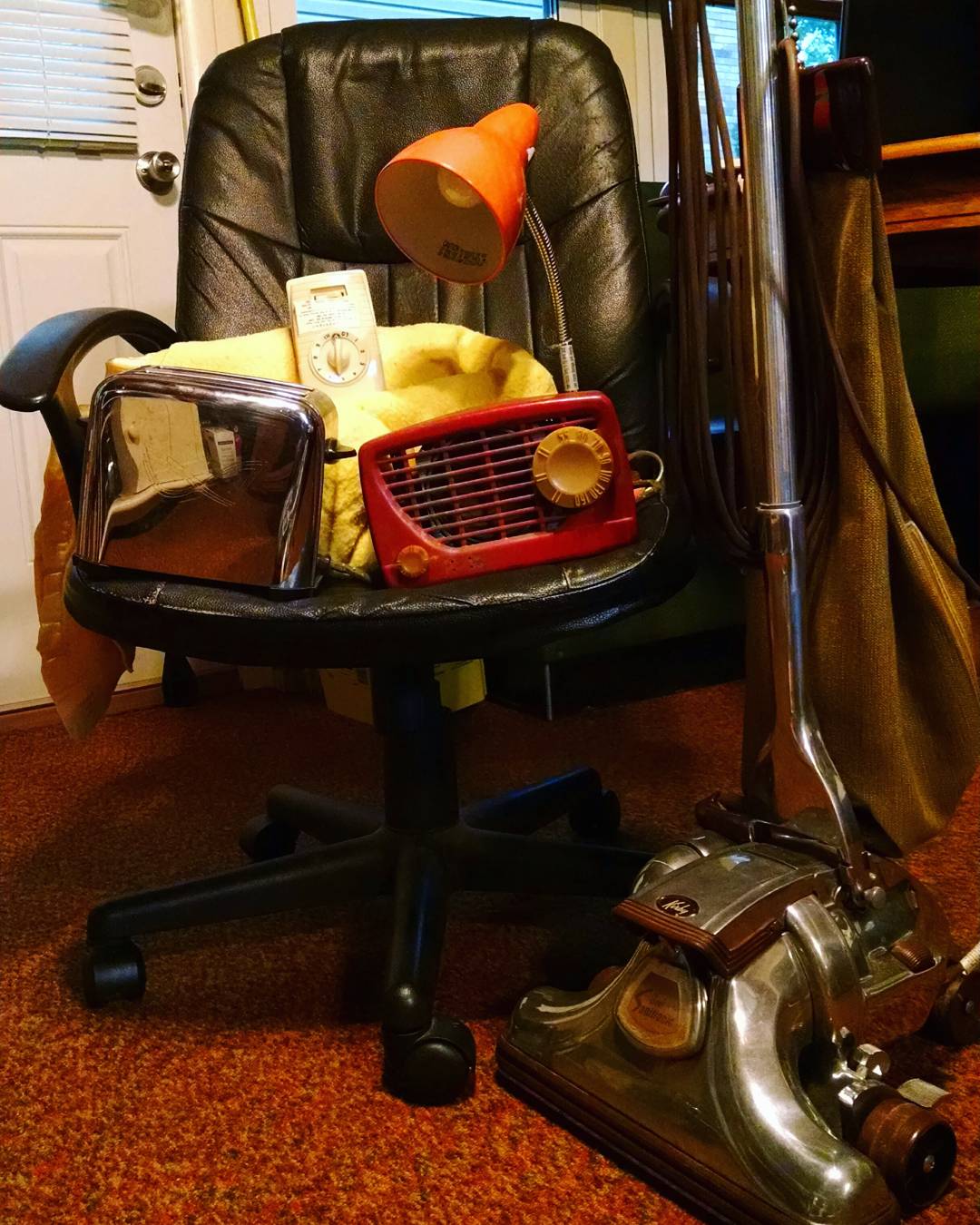 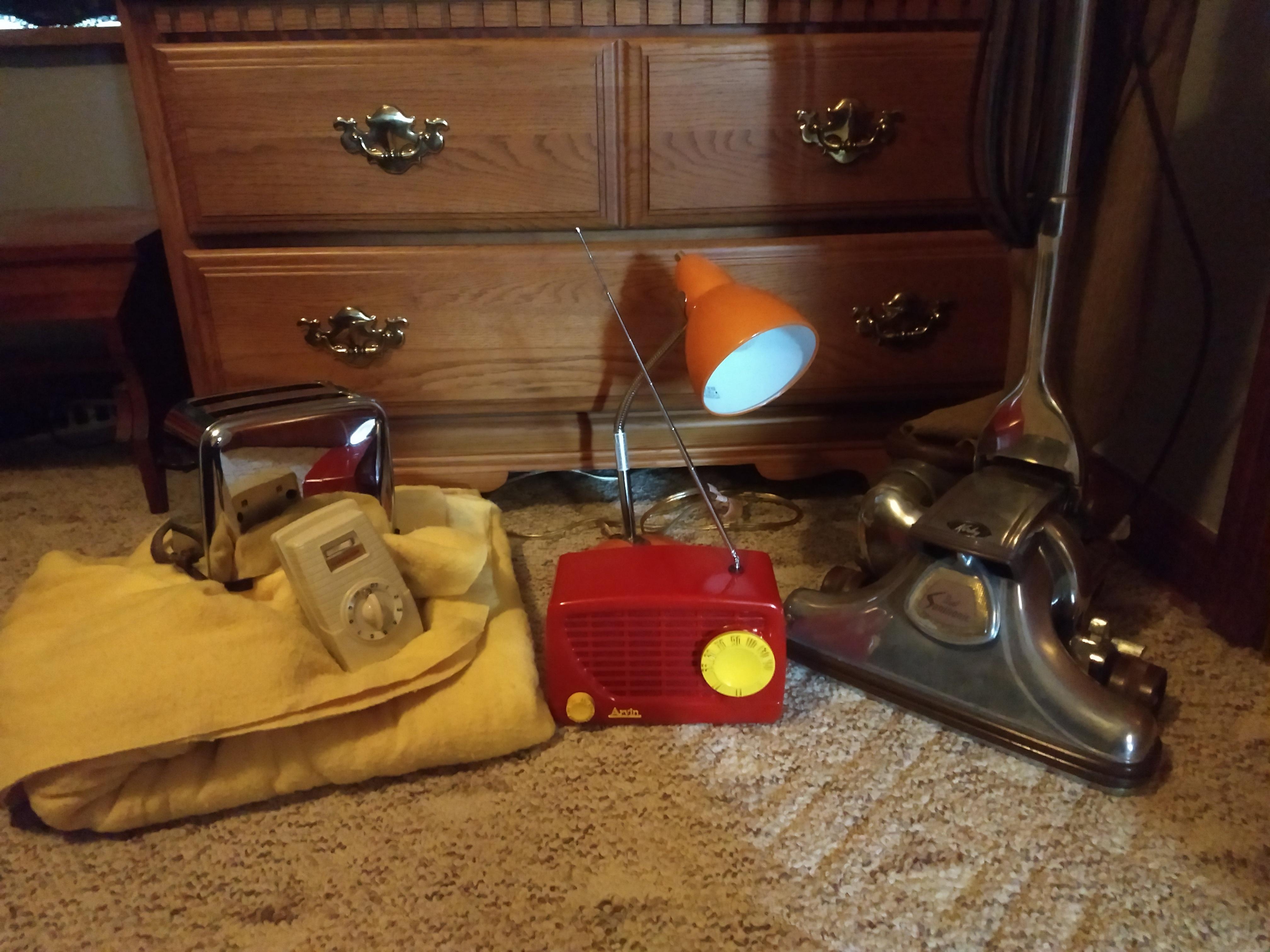 I am unfortunately away from home at the moment so I cannot take more pictures than this, however I will still discuss how I came across finding each of them, in order of when I obtained them.

Lampy: Lampy was the first of the main cast I got, way back when I was a kid. He came from Target around the early to mid 2000s. So I guess you could argue that he isnt a proper vintage lamp. But, he looks the part, and I couldn't bear with replacing him now.

Toaster: Toaster came from an antique store a bit more recently, probably around 2015 or so. No idea on the model number or manufacturer, but then again I haven't really looked into it. He fits the bill appearance wise, so that's all that really matters to me.

Radio: Radio was a bargain find at a flea market. A guy had a bunch of old radios for cheap, and when I saw the red Arvin 540T I knew it was destined to be my radio, even if its appearance wasn't a perfect match (Radio in the film really doesn't match properly with any real life radio that I've seen.) However as you can sort of tell from the first picture, it was not in good shape. It was rusty and scratched up, the knobs were faded, the actual parts inside were caked with mud, the cord was ripped to shreds. But for a while, until I had time, he stayed in this condition.

Kirby: Kirby came from another flea market in 2017, from a vendor who had a ton of old vacuums for sale. I had actually seen Kirby one day, but at the pricetag the guy was asking I walked away empty handed. Well almost immediately that week I started regretting my decision, and so the following Friday I went back to the flea market and asked the guy what the lowest he'd go for was. He said $75. I bit the bullet and went for it. And I have absolutely no regrets. Kirby was always my favorite, as for some reason as a kid I had an obsession with vacuum cleaners. And to have such a perfect representation of him, down to the triangular piece on the front resembling the nose, was well worth it. He's also rather unique, being a Kirby Dual Sanitronic 50 with a green bag. Up until then I had only seen Dual Sanitronic 80's with green bags, but those models notably have differently designed handles than the 50. So finding a 50 with an aftermarket green bag was absolutely perfect. Interestingly I've since seen another 50 at the same flea market with a green bag, but I of course had no reason to purchase another one.

Blanky: Lastly we come to Blanky. Blanky was the only one I purchased online, as by the time I obtained Kirby, I only had one more character to go before completing my collection. Not much more to say really, he's a yellow Westinghouse electric blanket. Not sure of the specific model.


So yeah guys, hope you enjoy. I'm presently working towards getting all the characters as they appear in the original Thomas Disch Novella. I have a Hoover Junior 119 that I need to restore, and just yesterday a neighbor was moving out and let us browse stuff they were getting rid of and I saved an old Toaster that is a pretty close match to the Toaster shown in the books. Finding a proper Lamp and Radio has been difficult, however, but I'll keep looking.