Community Staff
I have been working on Jesse James' costume from The Assassination of Jesse James by the Coward Robert Ford for over a decade and it is near completion! I am in the process of closing a number of personal websites, one of which documented that process. In order to not lose information, I am posting those findings here. I am not sure it will necessarily help anyone, but who knows.

Will Ghormely Interview Regarding Jesse James' Rig - Originally posted at playingforblood.com on April 28, 2008 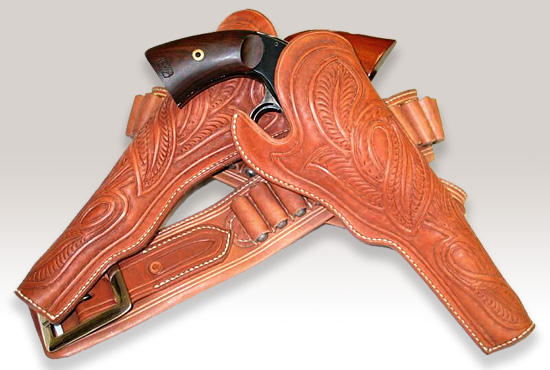 How did you become involved with the Jesse James movie?

David Carrico asked me to create a design for the Jesse James rig based on images of the original holster that was retrieved by the Pinkertons on the day Jesse James was killed you could look here. I faithfully recreated the original and provided a prototype of the holster to David as well as 7 additional holsters to be used for production.

So, did you make the final pieces seen in the movie?

Yes and no. I created the design and carved the holsters. The leather, provided to me by David was thin, so David sewed in a lining and finished the holsters. David also created the money/cartridge belt for Jesse’s rig. What is seen on screen are my holsters, sewn together and lined by David, on David’s belt.

How historically accurate is the rig Brad Pitt wears?

It is fairly accurate. I believe the original holster that Jesse owned and I used as a template may not have been made for a Schofield, as seen in the movie, but more than likely a larger firearm like a LeMat or an old cap and ball. There was a lot of extra leather in that holster. I recreated Jesse’s holster for the Schofield and designed a matching holster for a Colt SAA. There is no historical evidence of a matching second holster to hold the Colt SAA.

Additionally, Jesse’s original belt had cartridge loops that were 1 ½” tall and fully covered the cartridges. This style of the loop was a remnant of an earlier period when cartridges were more fragile and required more protection. The loops on the rig used in the movie aren’t as tall and don’t fully cover the cartridges.

Finally, the end of the billet on Jesse’s original belt was rounded while the billet in the movie has a ‘coffin’ end.

Did you design Jesse’s shoulder holster as well?

No. The shoulder holster was David Carrico’s creation.

Did you have involvement with Frank James’ rig as well?

Not directly. After creating Jesse’s holsters I designed and created Frank’s rig for myself, again, based on images of the original. Historically, Frank was credited as the fastest draw in the James/Younger gang. With this in mind, I noticed that Frank had cut a notch in the front of his holster that would allow him to cock his pistol while it was still in the holster. This meant he could cock his pistol before he went into a confrontation and then could draw, aim and fire without having to cock the pistol which takes time and requires the shooter to re-aim after cocking the hammer. I published this discovery on my Frank James webpage with photos of my reproductions of Frank’s rig. When Robert Ford first approached Frank James at the beginning of the movie, there is a closeup of Frank cocking his gun while it is still in the holster. Not my holster or belt, but cocking the Remington in the holster may have stemmed from my research.

I had the opportunity to talk with David Carrico today, owner of Carrico’s Leatherworks David was the co-producer of the gun rigs for The Assassination of Jesse James. I conducted a brief and very informal interview with David regarding his involvement. The following is what I gleaned.

David was contacted, via a friend, by Thell Rheed, the armorer for The Assassination of Jesse James. David was asked to provide rigs for Brad Pitt (Jesse) and several other generic rigs for various other characters. David contacted a collector who claims to own the original rig the real-life Jesse wore and also got reference images from the St. Joseph Museum. See images below of the real-life Jesse James’ rig.

According to David, he contacted Will Ghormley and had Will create the first prototype holsters to which David added one-two additions sets and a practice rig for Brad Pitt. While Will had a hand in the creation of the holsters, David made all of the money belts himself. David also created 3 or 4 shoulder holsters for Brad, which were also based on an original holster that Jesse carried.

David said both his and Will’s holsters were left a natural color and he did not darken or stain them. As they are a dark brown in the movie, this only leaves the staining to have been done by the production crew. 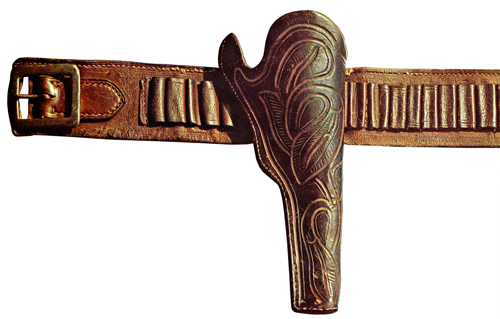 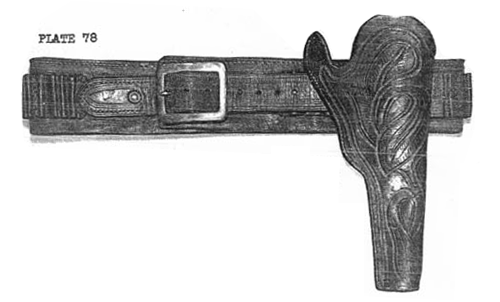