I have been searching over a year for this bag and today the search is finally over (THANK GOD).

I'm not going to say what the bag is as I'm sure someone is going to figure it out pretty quick after seeing all of my photos. I promise you that this is the bag as I have a couple of friends that work for the show email me pictures of Dean's Duffle Bag (Sorry I can not share these photos upon the request of my friends). Anyway here are the photos......

pretty cool, a def must to add to the Superntural collection. :thumbsup

Well I want one and have no idea what it is....can you share? PM? lol

Nice find - hope you end up sharing what it is and were you got it.:thumbsup
P

im not sure what the point is of not sharing. You have one so its not like you have to fight us on the bay for it

protokev said:
im not sure what the point is of not sharing. You have one so its not like you have to fight us on the bay for it
Click to expand...

Agreed! I don't have to have one but knowing what and where you got the bag from would be nice should I decide to look for one. Either way nice find! The bag looks great!

Really Guys???? You haven't even looked! :darnkids Trust me, the photos I supplied are a hell of a lot better (and there's more of them) than what I got from my friends over at Superatural, and don't go a thinking that they told me wha the bag was because they didn't even know. I'm not saying that I'm not going to tell everyone what it is, I am saying you least have to MAKE AN EFFORT to try and figure it out. The trick is not figuring out what the bag is (as it is pretty easy), the BIG TRICK is trying to find the bag......:eek I found my bag on Ebay but it is going to be a lot eaiser to find depending what part of the country/world you live in (THAT'S A HINT). Now start looking......:lol

Here are some screen caps of Dean's duffle bag:

protokev said:
There was already a thread about this where people looked. This is a community of sharing. I'm not going to go on some chase to seem worthy for the info. I'm not a dog, I'm not going to do tricks for a treat.
Click to expand...


Yes I know there was a thread already done about Dean's duffle bag. Here's the thing, there has never been a close up of what Dean's duffle bag looks like so that's why nobody was able to find one or even tell what it was. With that being said this is why I started a new thread about the duffle bag. I feel that people should show a little effort/deterimation on trying to find this for themselves. I made it a heck of a lot easier figuring out what the duffle bag is by showing my photos. You might think I'm an ASS (really don't care what you or anyone else think's) for saying this but then again I don't give a rat's ass if anyone if gets one or not. I will help those who actually want to particapate trying to figure things out for themselves but I sure am not going to help those who just want to sit back and enjoy the hard work of others. A COMMUNITY OF SHARING only goes to those who ALL work for something in my book. What ever happend to the old saying the thrill is in the hunt???

Hey everyone, I finally found all the long lost parts that have never been identified on the Stormtrooper backpacks. Good luck everyone finding them too!

That's spot on to my Jugoslavian military duffel bag, only mine has lift-the-dot snaps instead of the buttons.

Well at least if you found one, that means we all can...lol....:cool
S

Okay I'll play if no one else want's to. It's obviously military and you said it is from a different country, so I take that to mean it definately isn't from America. Any hint towards which country/part of the world it is from?

My kitbag is almost identical to that bag except that mine has 5 buttons instead of 3. Perhaps that is an older style of ours. I can post a pic if people would like. 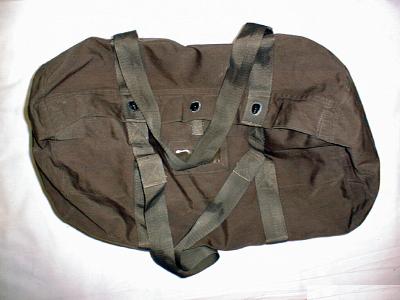 Look at the picture link, give 'em a call, would be my best suggestion.

Now thay's what I like to see! People actually caring about something enough to do some research instead of just asking some guy what is it.......

Boy you guys are getting so damn close your burning up! The one in the picture is not it as it as nylon handles and the name tag placement on the body of the bag. Dean's has the name tag placement on the end of the bag and has cotton handles (the whole bag is heavy cotton/canvas). Keep on the the 5 button bag and you are correct it is not from the USA. Think REALLY HARD about Supernatural and it will come to you (trust me that's how I figured it out).

It would make sense that the bag is canadian. The show is filmed in Vancouver, British Columbia and like I said, my kitbag is identical to that bag except it has 5 buttons instead of 3.

So it would lead me to assume that the bag is an older style milsurp Canadian Forces Kitbag/duffle bag.

Now that wasn't so damned tuff was it? Good luck finding the 3 button bag as it took me FOREVER......:eek

Give me some leads on the Journal and I'll be happy :cool

What I found today going through boxes.