I started this kit on June 26, 2009. The kit is from Mensaboy Models.
The build stopped on December 21, 2009 due to a Star Destroyer commission build.

Other commission builds (and a few personal builds for myself) kept me from finishing this Tie Fighter.

Since the Y-Wing build is complete and I am not doing commissions right now... I decided to complete all of my started builds before I work on any new kits.

Sorry, I lost all of my build photos for this project up to this point.

The interior cockpit was scratch built by me. I used reference photos to get it as close as I could with what I had at the time. The top 'canopy' comes off. This is so you can install the 9V battery. The two rear engines and cockpit light up!

The mount point was originally just a large clear rod. This left a huge hole on the bottom of the ship. I have changed this so that it can now use a panavise camera mount.

The first wing was mostly completed back then. I did not use the included fiberglass panels. Instead I cut out two panels from aluminum sheets. You can see this on my building of the second wing shown below.

I have updated only a few details/greeblies from what Mensaboy made (seen below). Some are accurate and some are not. Sorry to the rivet counters, I am not going for screen accuracy on this. It is close and I am happy. That is all that matters.

Each wing is put together differently. The result is nearly the same once completed. There is a lot more cleanup on the first wing compared to the second. This is due to the fact that I have better tools now and my skills have improved since then. 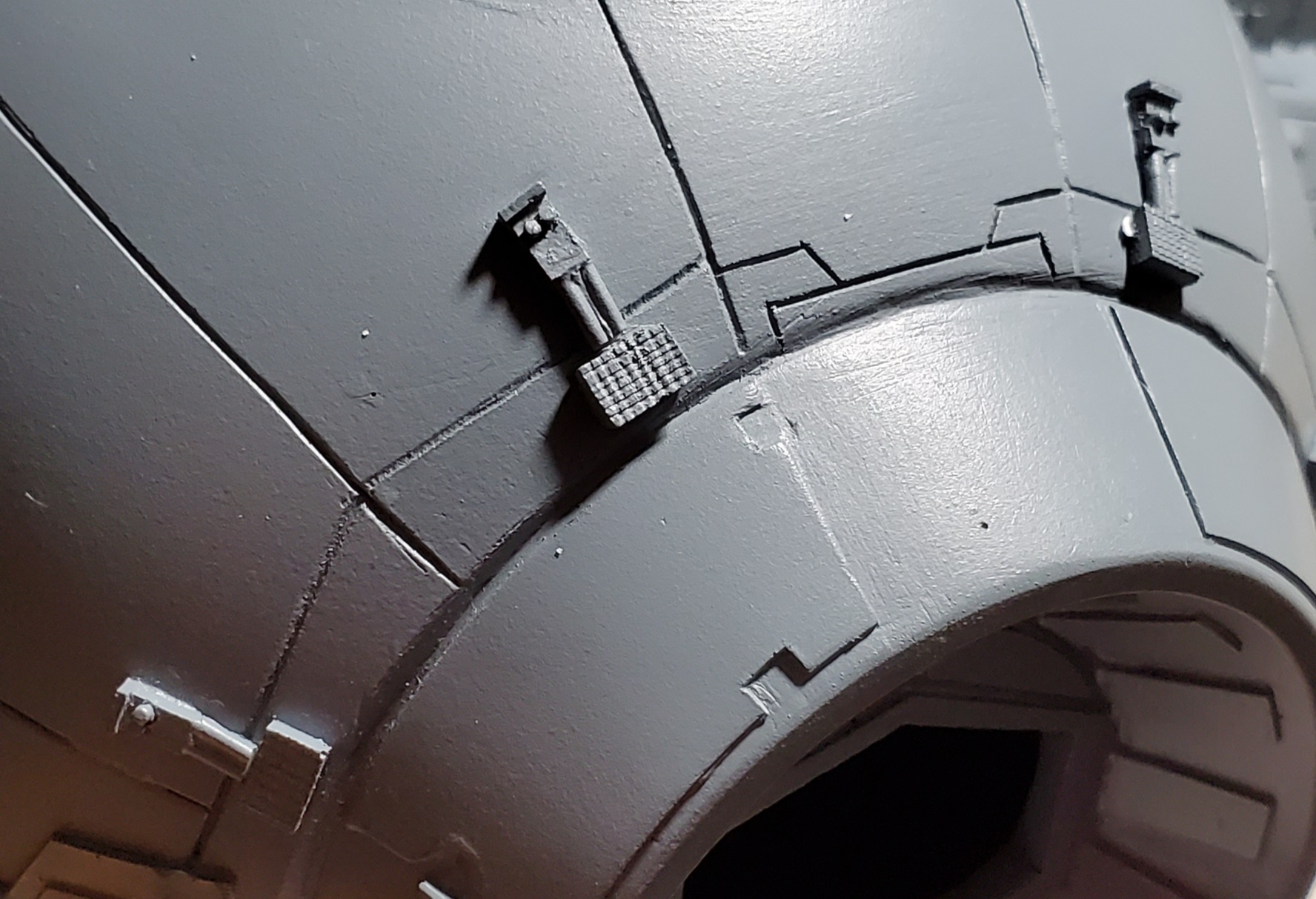 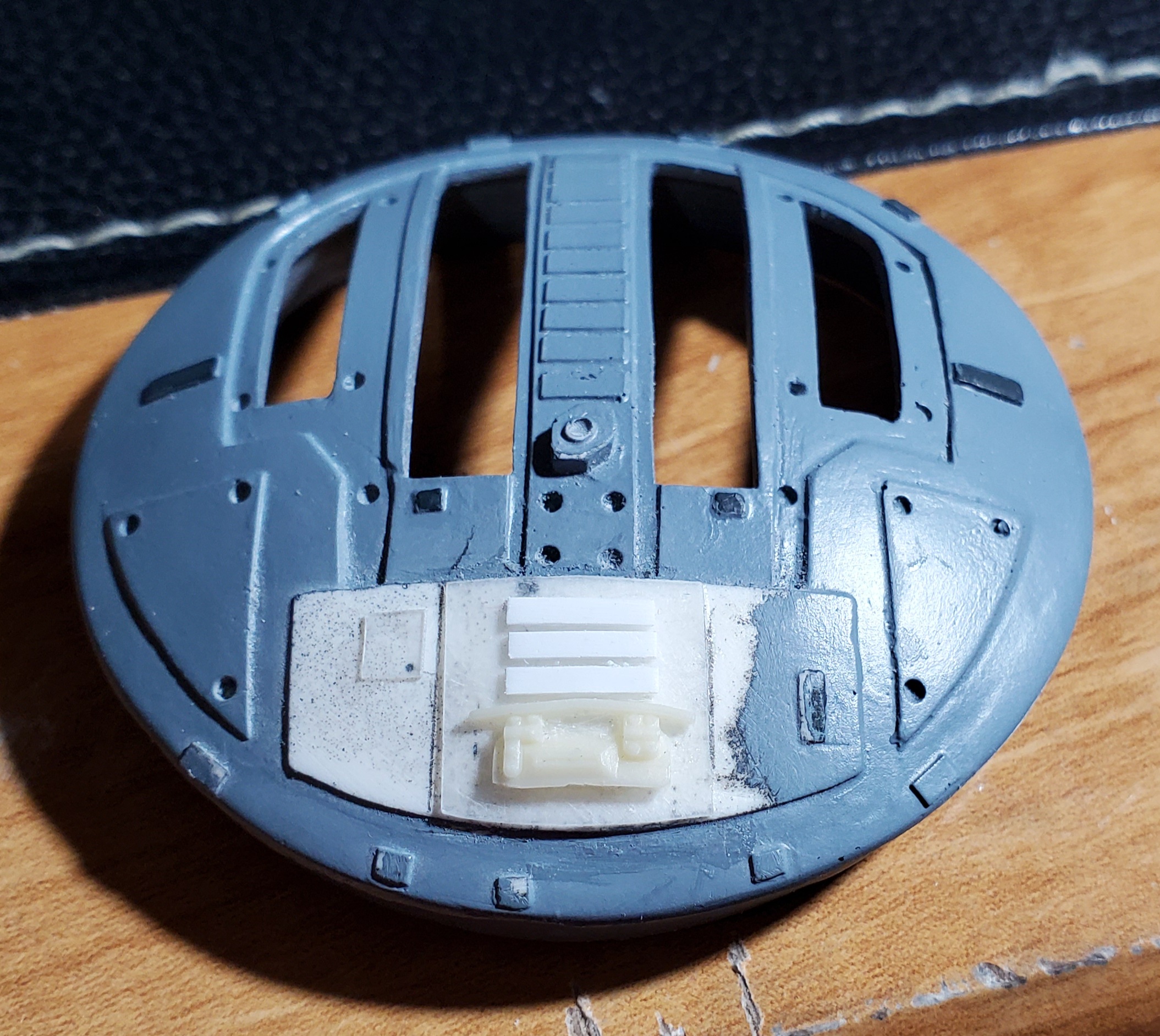 Starting the second wing.
Magnets used to help hold the faux Koolshade flat and in place.

Printing Deathstar tiles. Two done many to go. Not sure if I'll use them on bases for my builds or make a framed display of them. Maybe both 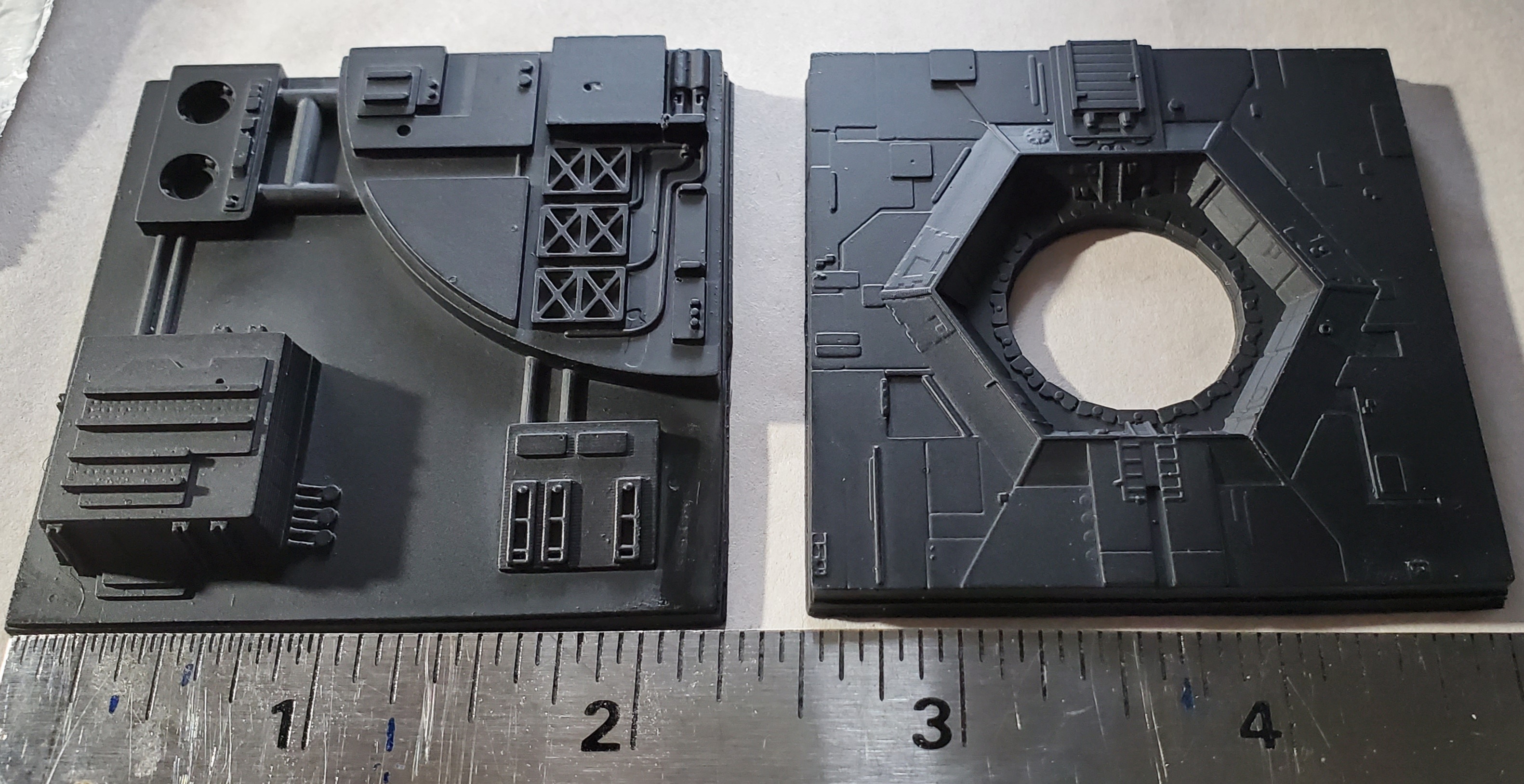 RPF PREMIUM MEMBER
Nice, that is looking great so far!

dtssyst said:
Printing Deathstar tiles. Two done many to go. Not sure if I'll use them on bases for my builds or make a framed display of them. Maybe both

Are these the correct scale for a 1:24 model? I just wonder as I have a set on a base for my TIE and I am not sure if they are really to scale or not...

skahtul said:
Are these the correct scale for a 1:24 model? I just wonder as I have a set on a base for my TIE and I am not sure if they are really to scale or not...

As far as I know they are not to scale.

Not really sure what the true dimensions would be for them to be considered 24th scale. If someone here knows the answer, please share that knowledge.

From what I think I remember reading/research...
Some original filming tiles were 3" square and some were 6" square.

The tiles I am currently making are 2.25" square. This is due to the Anycubic Photon printer build plate. I scaled them to fit the build plate (with supports if needed). I did slice a few to be joined together after they are printed.

If/when I can get a resin printer with a larger build plate (Anycubic Photon Mono X is on my radar), I can and probably will make them to the correct 3" and 6" sizes. If anyone here wants to get me a Christmas present... wink, wink, nod, nod

Yes, I can print them on my Anet A8 printer to the proper size. I did not as I wanted the detail that the resin printer can achieve.
Anycubic Photon 0.02 mm vs Anet A8 0.2 mm resolution is a huge difference in my opinion.

Main body primed black (again).
Then I painted Tamiya TS-32 Haze Grey for the main color.
Note: I am using the same colors I used back in 2009.

I still need to work on the wings. 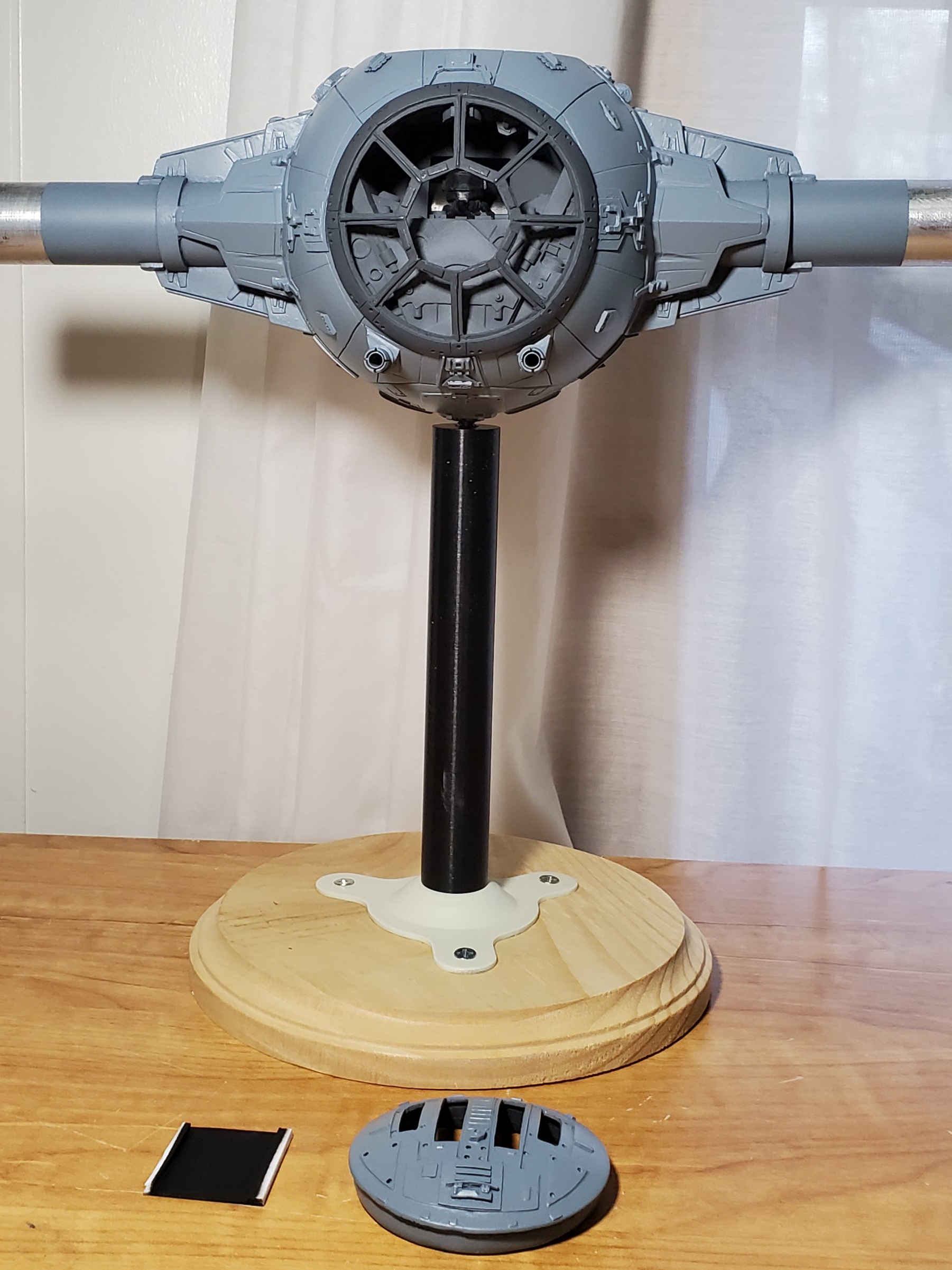 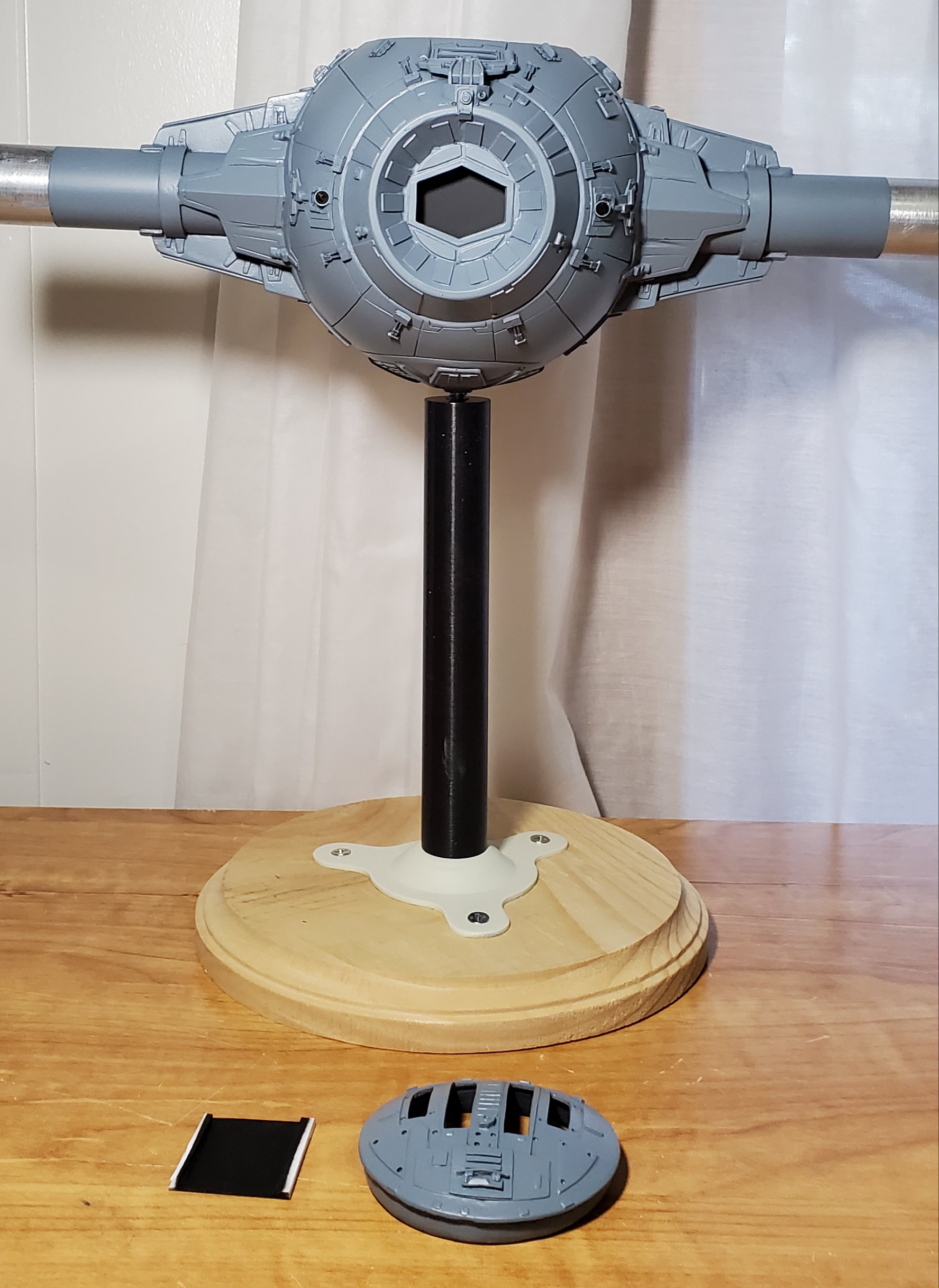 So close to the finish line.

Wings are not glued in place yet. 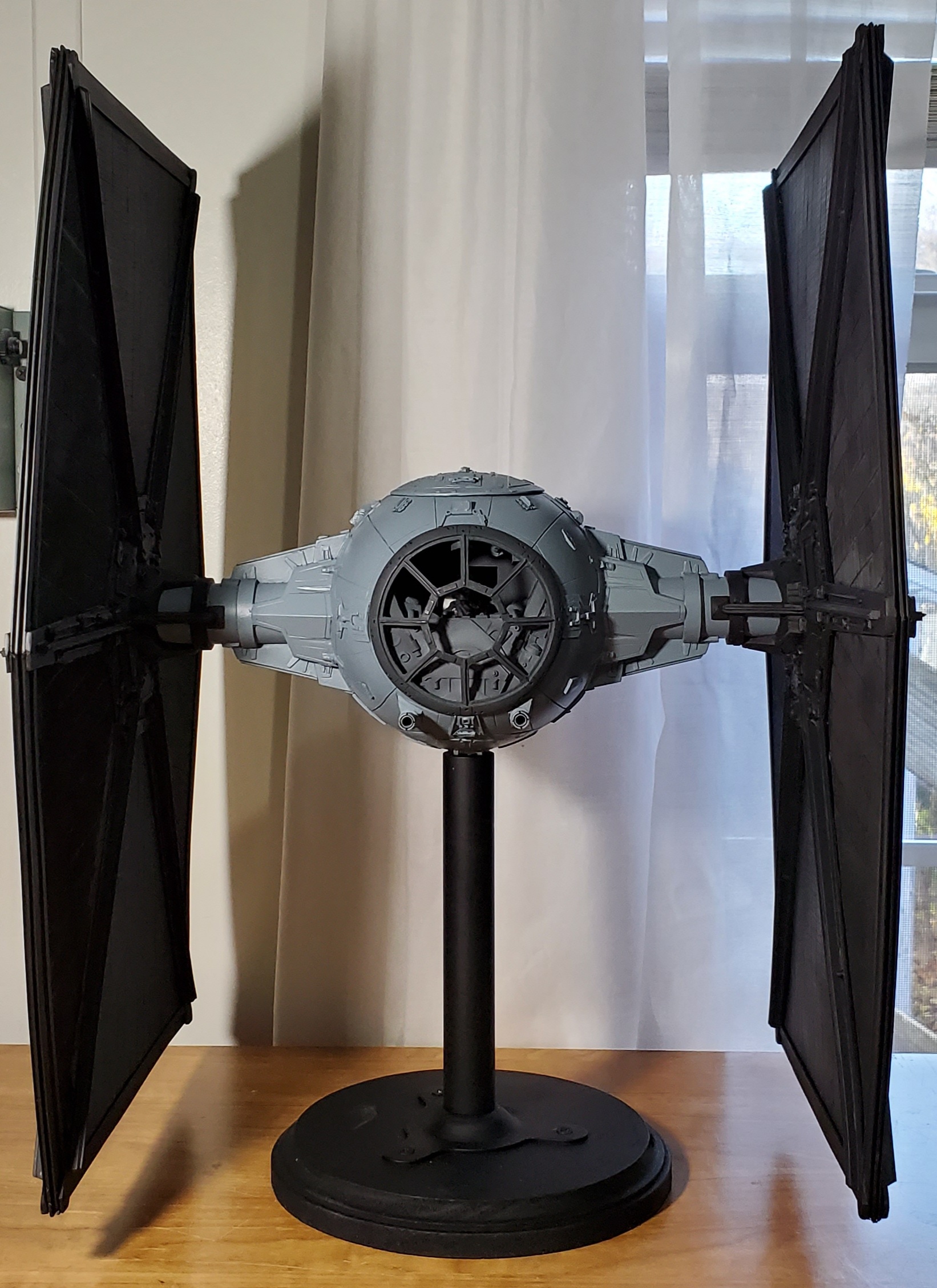 So close i can hear the empire theme song playing in the distance...

Note: I never paint with warm white light as a light source. I always use daylight. Whether its outside sun light and/or indoor lights.

I'm calling it done.
Not a perfect nor accurate kit but it fills and fits the part.

Hmmm... whats next on the bench to get finished? 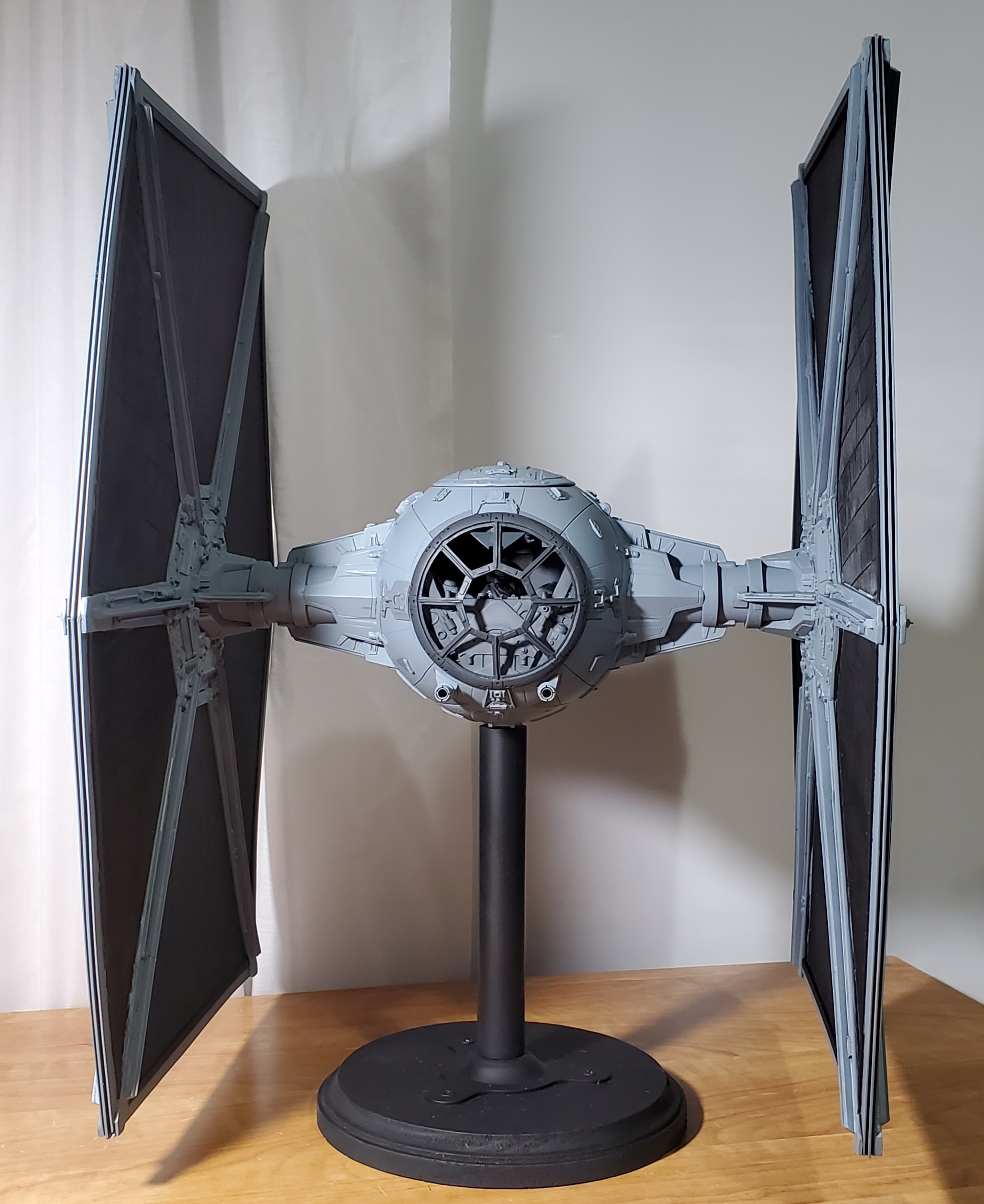 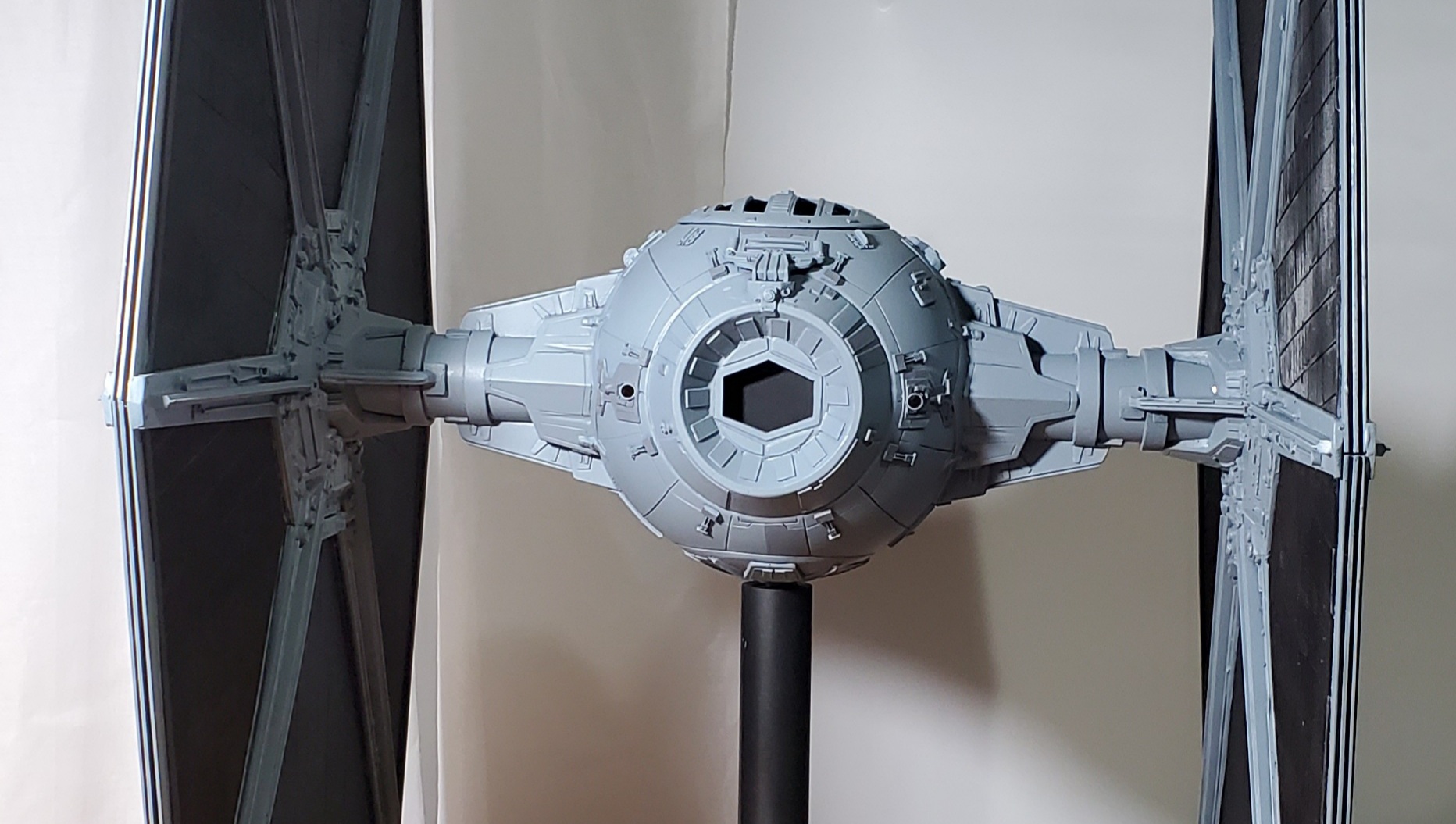 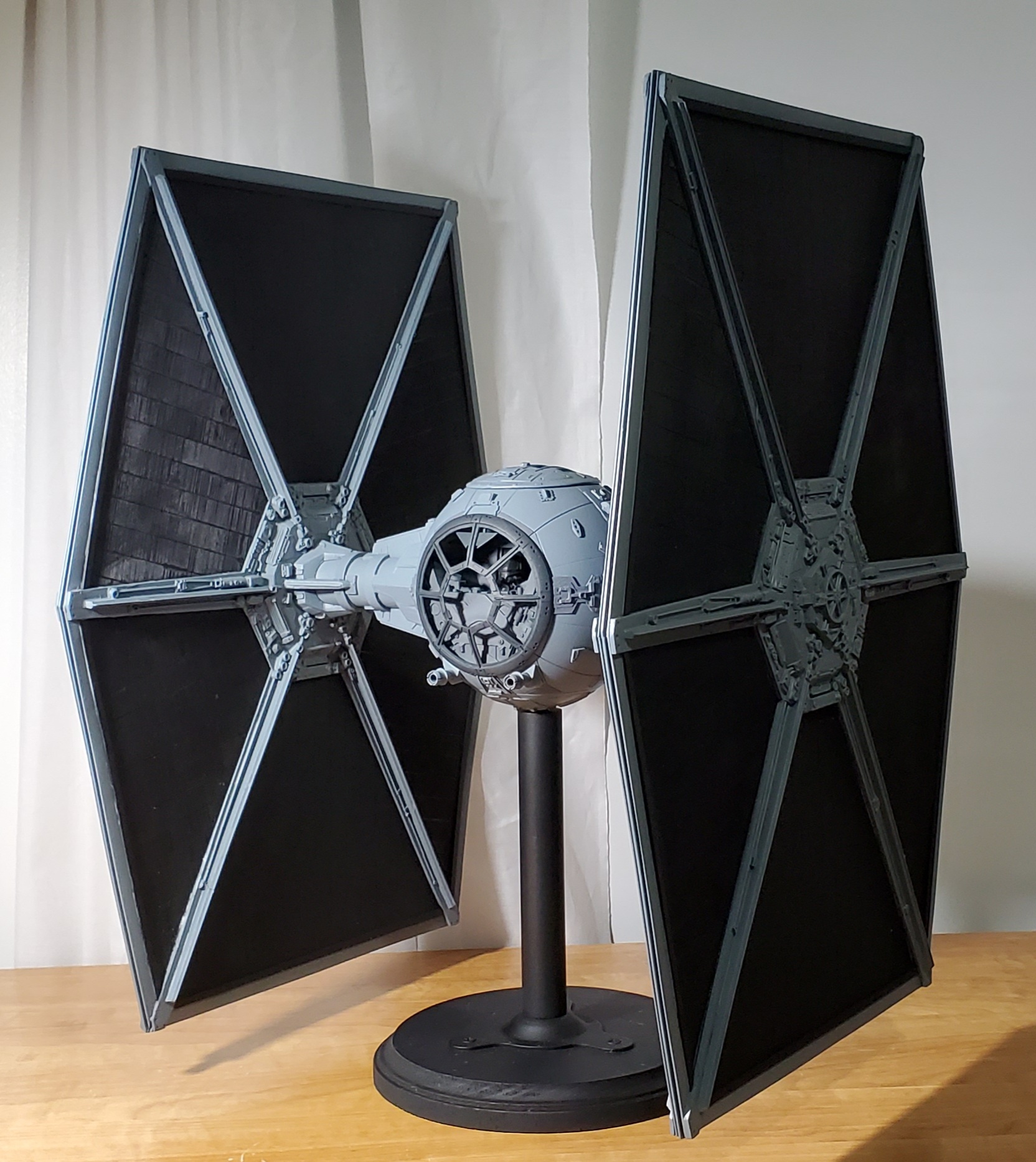 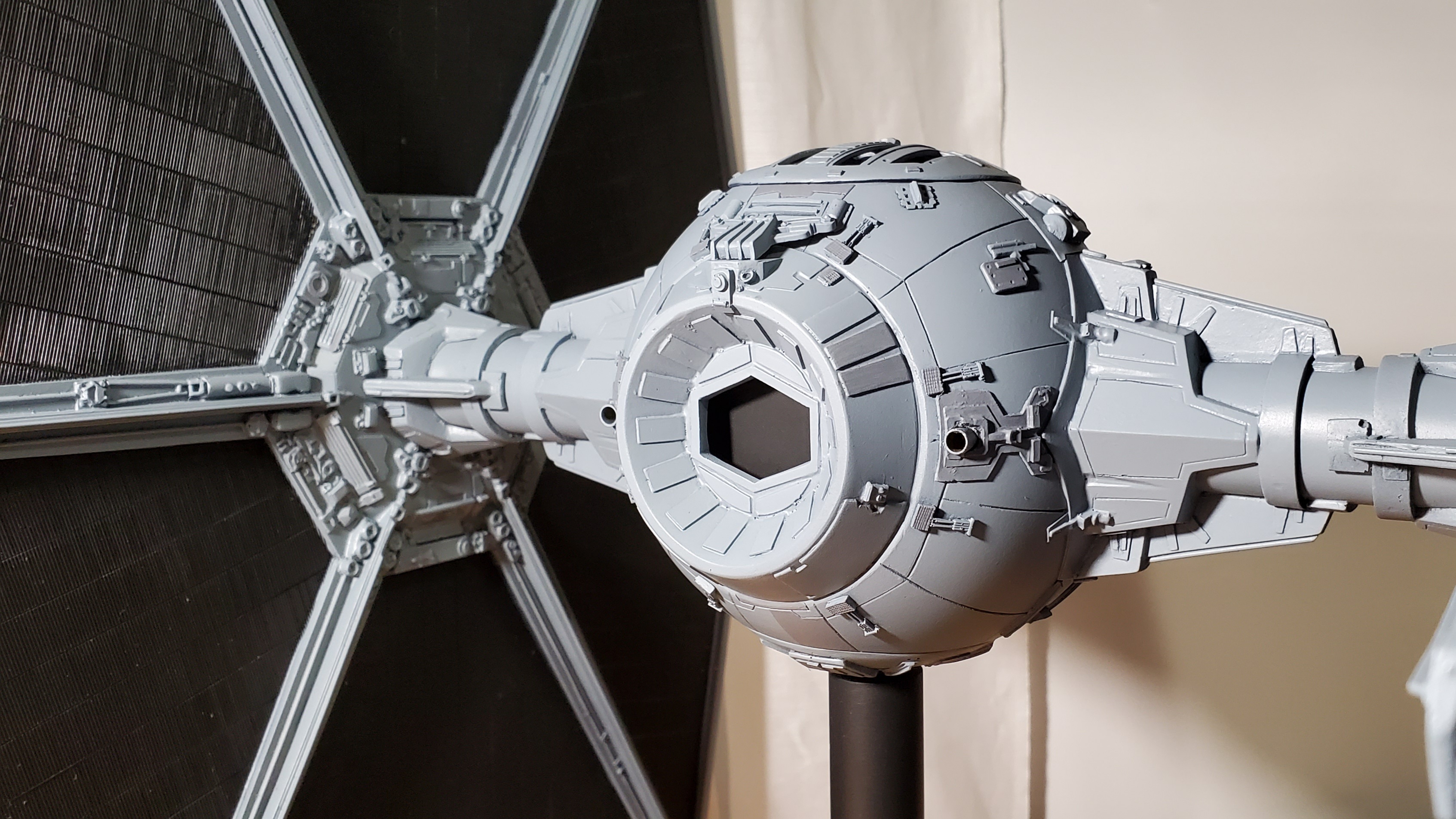 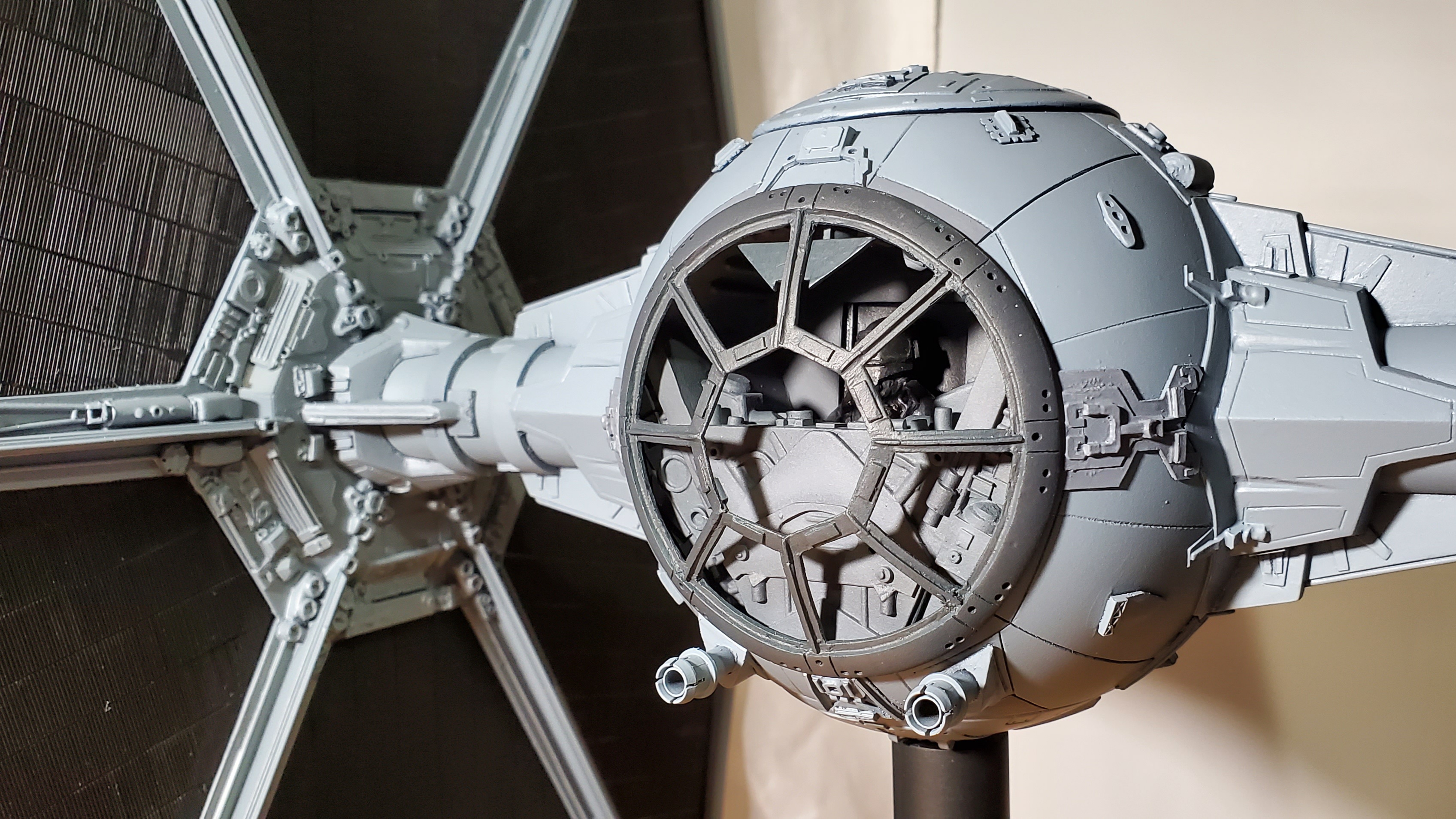 Thank you joberg and Chuffy 70