This was a fairly quick model of the Discovery/ SNW HypoSpray.
I only use the WINDOWS 10 - 3D BUILDER to do most of my designs and editing of STL files.
Works best for my needs.
.
Looking to break it down so that is can be printed with an FDM printer in sections.
(this prop is not to scale)
.

This is a remastered version of the Discovery/SNW HYPOSPRAY.
Designed to be disassembled if needed.
' 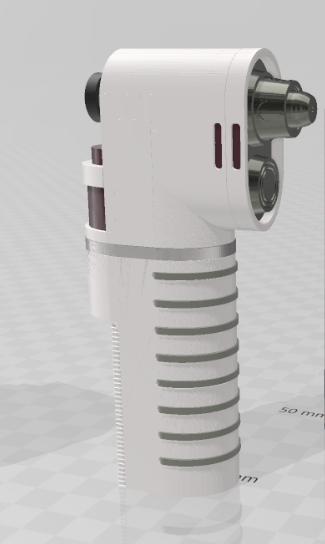 I thought this would be another prop I could model in 3D BUILDER.
Maybe print in Silk Metallic GOLD and cover the outside in some kind of olive color designed fabric.
.
Designing it to be a bit different then the original.
.
SNW Vulcan Jewelry BOX representation.
. 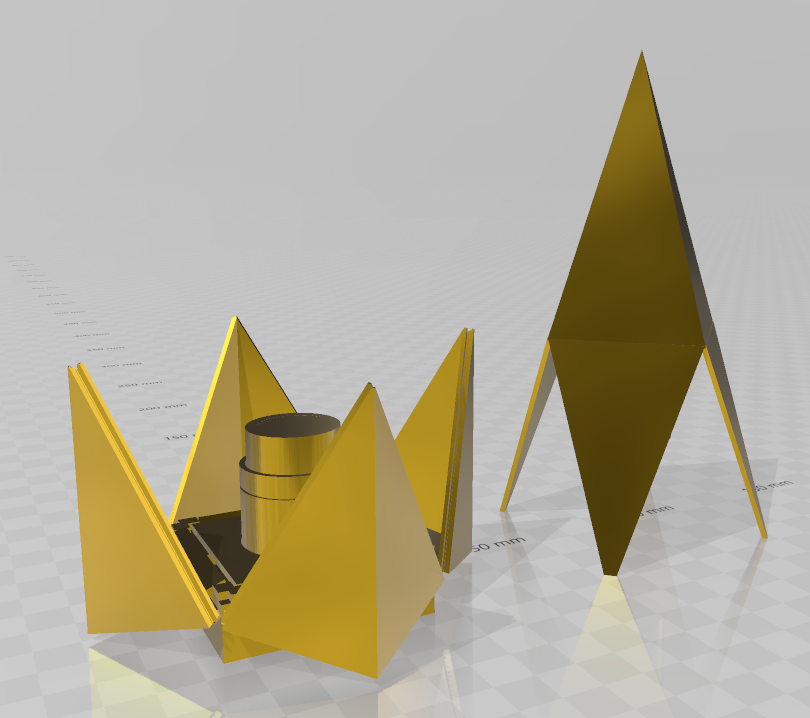 I got a chance to finally watch the first episode of SNW and I noticed that the "blue" indicator is only on the Left side of the HYPOSPRAY and not on the right side.
It seems that the "artist rendition" shows the blue indicator on both sides (unless the Discovery version has it on both sides).
DOH!
Glad I caught it for when I make my own version rendition.

This is an update video showing where I am at with my more useful version of the Vulcan "Gift" Box.
Still have to Design and print the lid.
It is DESIGNED it in 3D BUILDER to be @50% larger then the actual prop from the series since I wanted something that was more useful to me in the real world then a replica.
.
.

RPF PREMIUM MEMBER
Totally impressed! Those design elements are fantastic. After watching a clip on the operation and the original’s $$$, you really nailed this! I’m sure many hours went into this great build ~

"It's just a box, it's just a box.......it couldn't just be a box"
.
I did a bit more work on this version of the Vulcan Jewelry Box Inspired by the prop seen on Star Trek: SNW.
.
This version is about 50% larger since it will be used in the real world and not as a prop.
More of a representation then a replica prop with more unique design aspects.
.
The original would have had the 4 side "wings" raised by hand before the top was put on by the property master to hold them together ..
This one is of course, different.

RPF PREMIUM MEMBER
Check out the clip @ around min 3:15. This is great! Star Trek: Strange New Worlds | The Retro-Futuristic Props Of Season 1 | Paramount+

Thanks for the heads up ​

I still have a way's to go on this before it is completed.
Printing more parts......etc.
Rounding off edges, prepping for paint and lighting.
.
As mentioned earlier, this was designed in WINDOWS 10 - 3D BUILDER from photo captures taken from the episodes.
It is more of a representation then a replica since I don't have actual dimensions to go by....
.
This version is compact and closely resembles the original size and shape when held in the hand.
Didn't design with the delta on top with this one.
.
My intensions are to mostly have it used during conventions and cosplay, so if it gets damaged, I'll simply print another.
.
I am using an ENDER 3 FDM printer and white PLA filament.
I know there are versions available on line, but I wanted to try my hand at design using BUILDER.
There will be 2 switches (in series) to activate the LED LIGHTING.
One in the nozzle and one in the push button trigger.
In order to have the LEDs shut off in sequence (from top to bottom) the switch in the nozzle "must be depressed as well" by pressing it against the patient (two switches in series).
The nozzle collapses in, to push in on the "safety" active switch.
I also printed 8 ribs to the grip to be added after paint.
I also split the handle in to two parts and held together with two, 2-56 screws and will have a silver "ring" around the seam to add detail.

.
This version is not meant to be an exact replica, just a close approximation.
.
.

Here is a quick video of the electronics I am working on for the SNW HYPOSPRAY.
.
.

This is just a quick update video (link) to where I am at with my own design of the SNW Hypospray prop, it's electronics setup and programming.
.
.

I am using the "small footprint" ARDUINO - ATTINY85 (DIGISPARK).
It has just enough IO (A/D) pins for this job and it is about half the size of the PRO or NANO.
Approx. the same size as the new beetle, works great and easy to program, but more in my budget.
Plenty of programming space too. .
Still runs ok on a single 3.7V litho, but I am using 2 - "in parallel" in this particular case, for more capacity
(longer life) and smaller size. 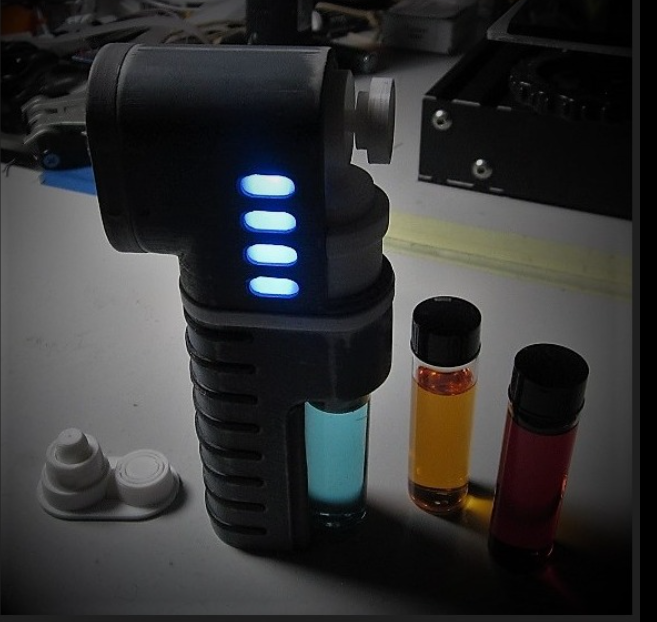 Still steadily working on my version of the SNW HYPOSPRAY prop.
Mine is more compact, yet has a few more functions (features) then the prop makers made for the show's (Disco and SNW).
.