I absolutely adore Thor's not-so-new-anymore weapon and with Endgame just around the corner I knew I had to add it to my collection!

For this build I’m using the awesome Herban - Props/MasterMod Pepakura file as a base, which I downloaded from here. This isn’t the most detailed model but I plan to use the handle pieces for my build and the rest as a reference point for creating my own model for the axe head. Another brilliant resource that I will be using for this project is the MCU Wiki’s Stormbreaker Gallery which has some beautiful high-res shots of the axe, including behind the scenes photos that were great for working out the scale of the prop. Using these, I estimated that my replica should be around 120cm tall – coming up to the middle of my stomach as it does on Chris Hemsworth.

After a few hours’ work, here is the 3D model I created for the head:

I then split the model into different sections, exported it as an OBJ and unfolded it in Pepakura Designer (unfortunately, I only have the free version so I can’t save the file – only print the unfold as soon as it was completed.) Finally, I took Herban-Props/MasterMod’s model and modified the proportions of the handle to make it less curved and more accurate to the original prop. 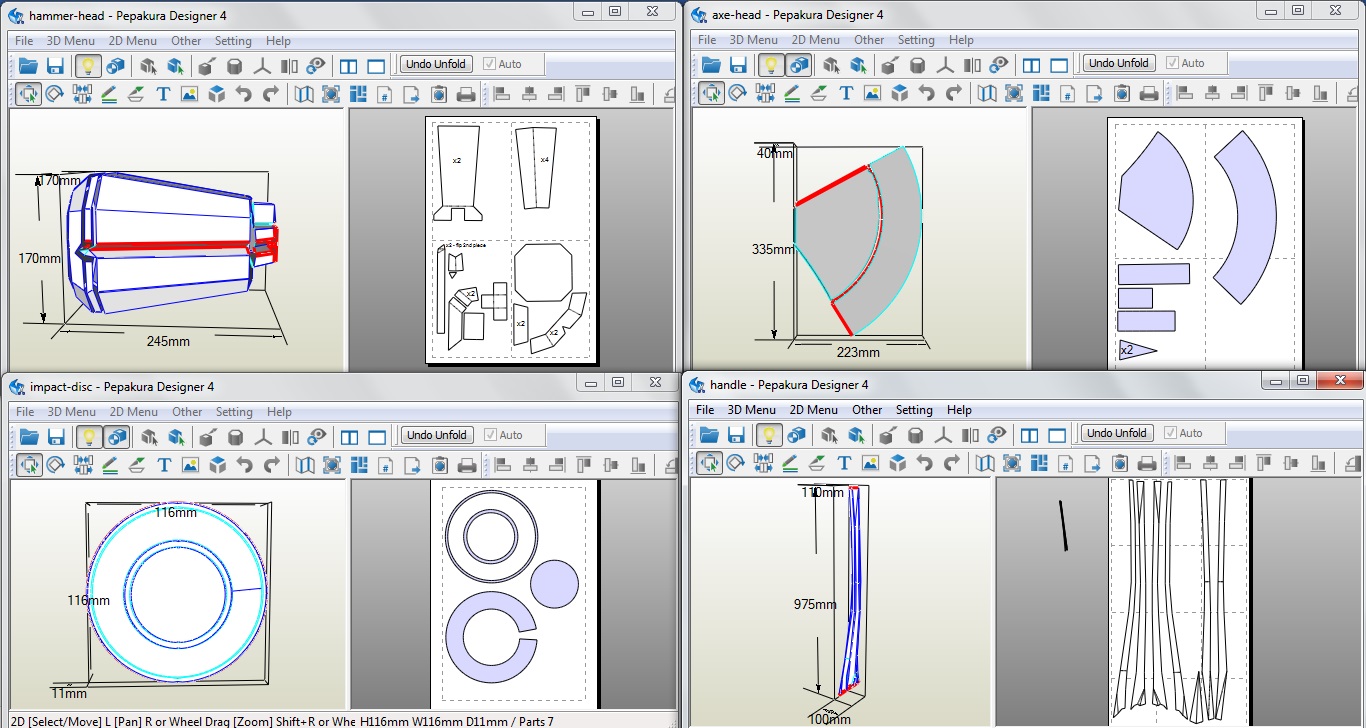 I decided to start by building the axe head because it takes up such a huge portion of the prop but also has the least number of parts so I figured it would make an easy starting point. After printing out the Pepakura file, I began drawing on the various detail and panel lines before transferring the templates onto cereal box card. I love working with this material purely because of how versatile it is – it’s thin, flexible, available for free in abundance and with the right reinforcement it can be really hard-wearing!

Speaking of reinforcement: to strengthen the card (not to mention give Stormbreaker some realistic weight) I glued a piece of roughly-cut hardboard to back of the large side panels, then coated the inside of the blade with paper mache. I also glued a series of cardboard “ribs” into the axe blade to help maintain the shape and curve. 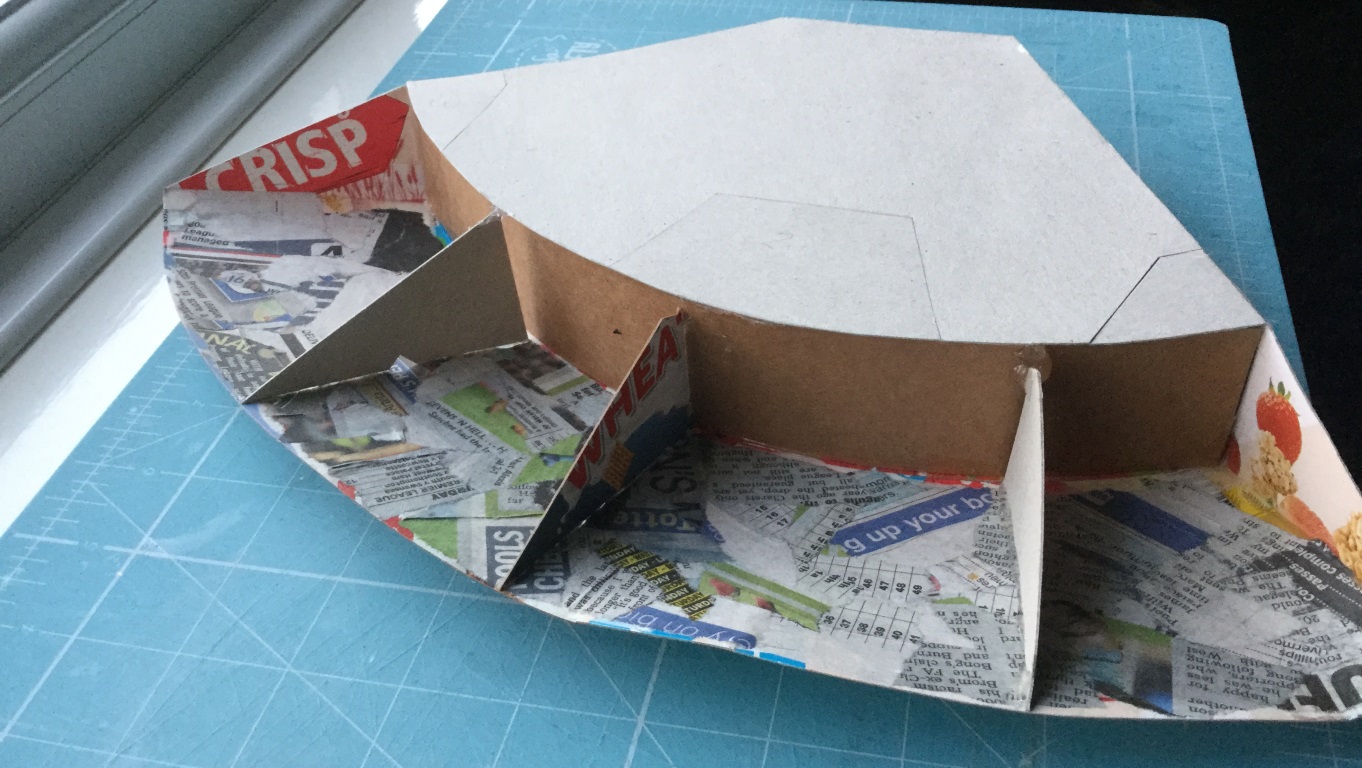 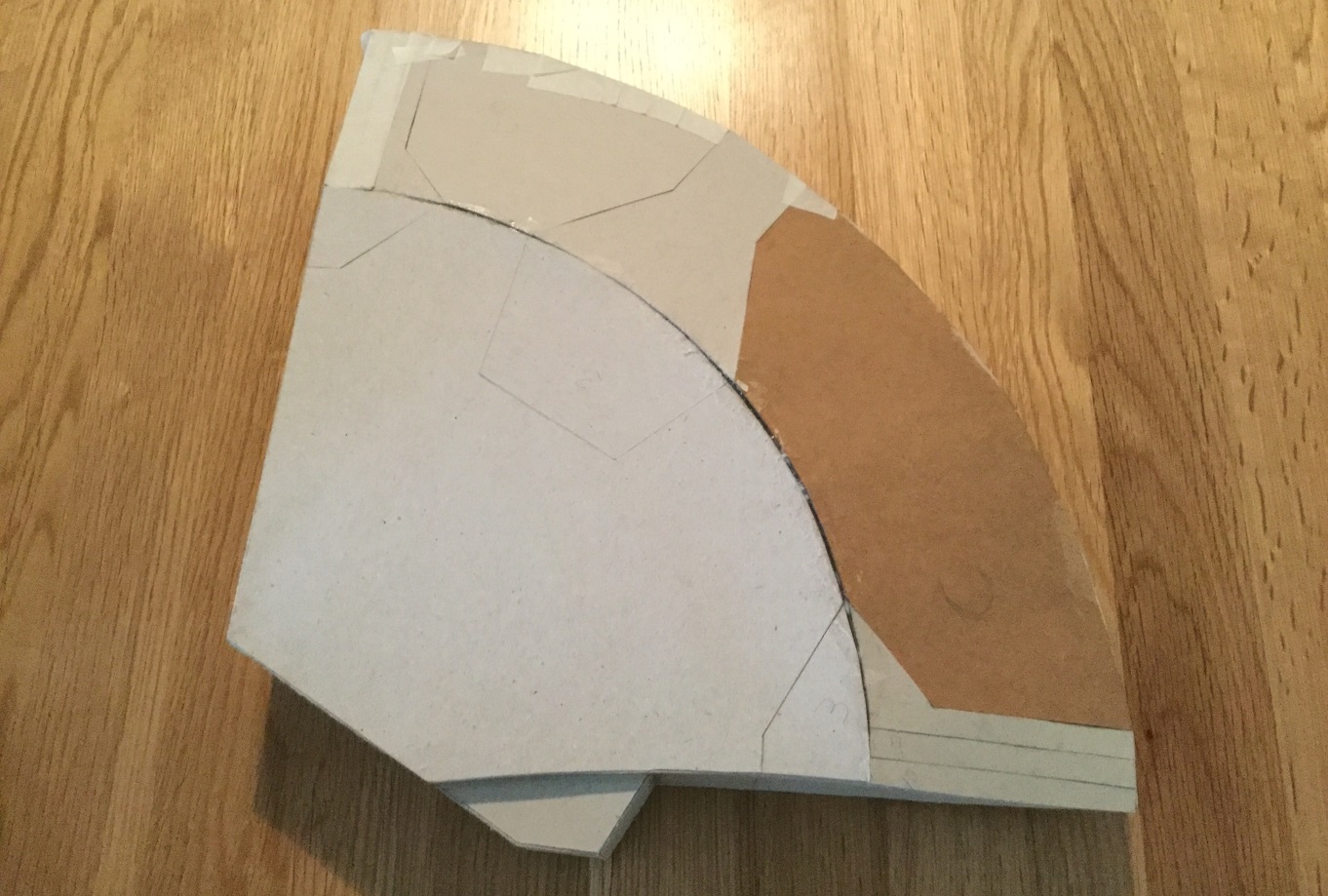 For Stormbreaker’s hammer/counter-weight I followed the same process as for the axe blade – print out the pep templates, cut them out of card, reinforce the bigger pieces with hardboard, assemble, then coat the inside joints with paper mache. 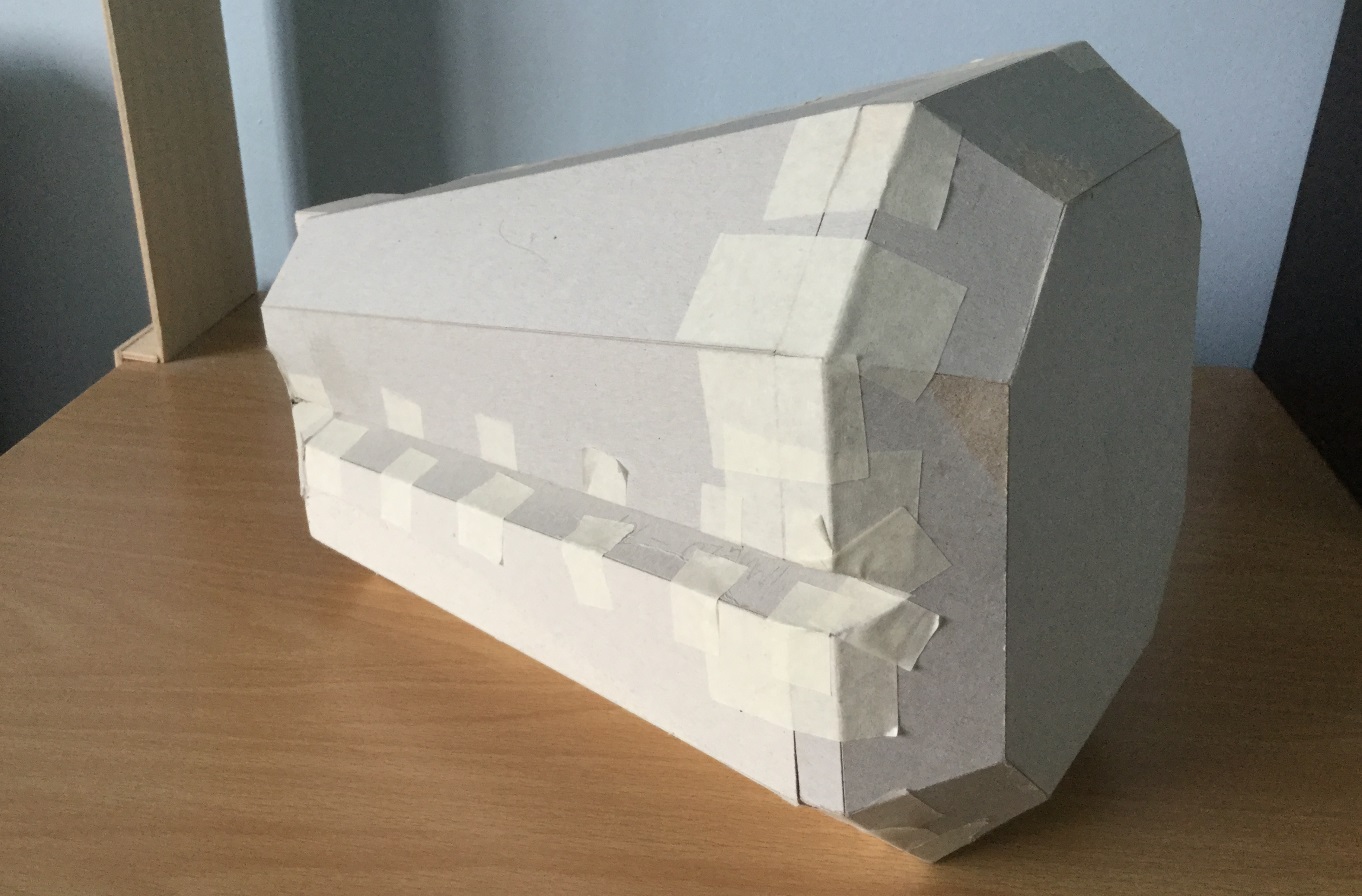 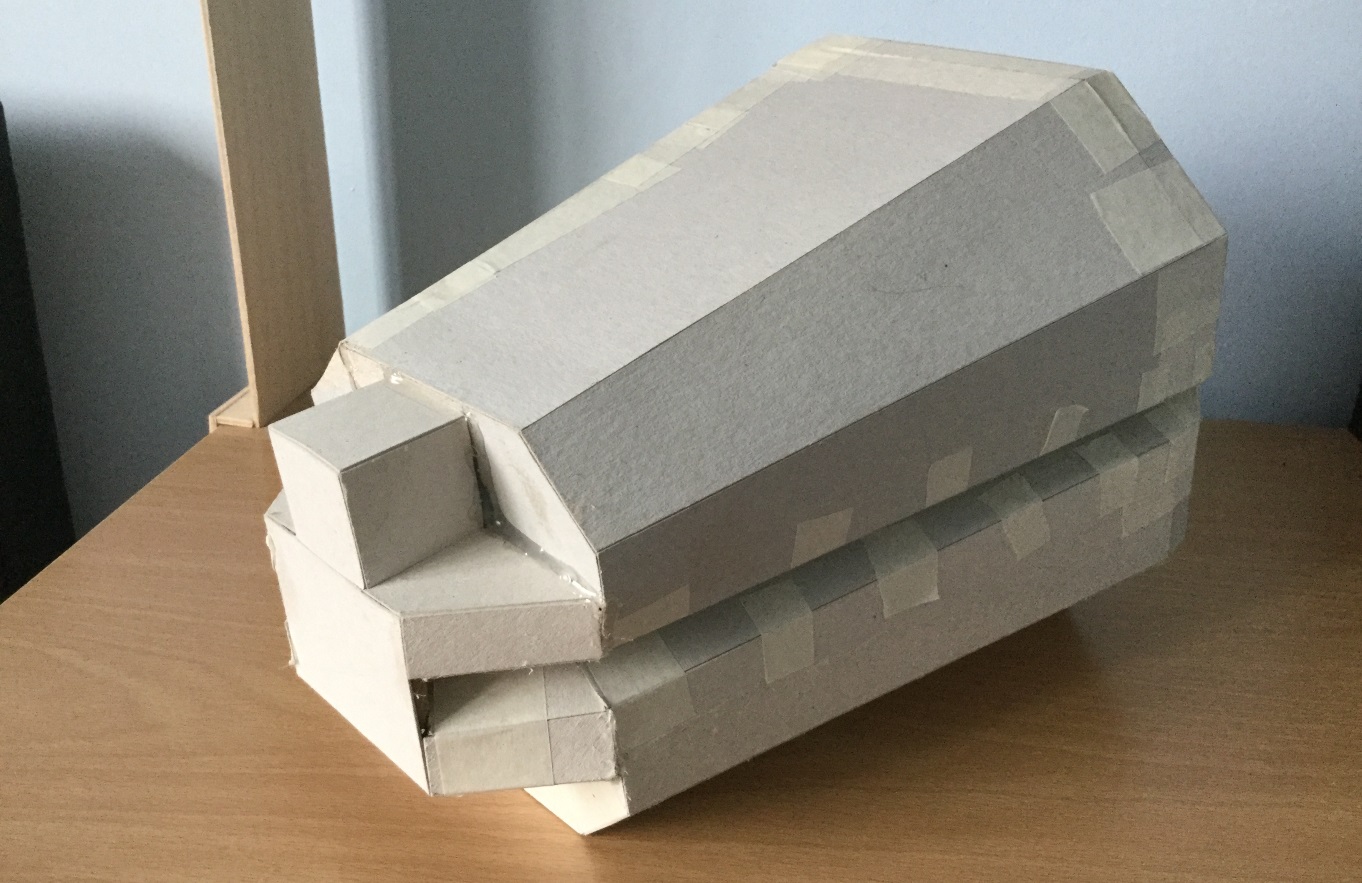 For the “slabs” connecting the axe and the counter-weight, I needed a material that could withstand the extra weight of the two halves as well as provide a sturdy base for attaching the handle (otherwise, there was a chance that the axe could break if I swing it around and let’s face it, what’s the point in having your own Stormbreaker if you can’t swing it like a madman?!) Luckily I had some spare scraps of 15mm thick MDF and 10mm thick plywood that were perfect for this. After cutting four rectangles out of the 15mm MDF and one out of the thinner plywood, I glued each of the slabs together using plenty of PVA glue, before gluing on the axe and counter-weight. The bonus of using more wood for this is that it adds even more weight to the finished prop – and I’m aiming for something that is as solid-feeling as possible!

Next, I shifted my focus to the finer details. Purely by chance I stumbled across the Original Prop Blog which has some amazing photos of Stormbreaker on display at SDCC last year. For the thicker details on the axe I used cereal box card and assembled them from (complicated!) 2D nets, followed by pieces of foam and card for the thinner details. For the raised details on the counter-weight I used strips of craft foam before etching the Norse symbols into the sides using a pencil. (Fun fact: these symbols actually spell out the words “strength” and “valor”!) 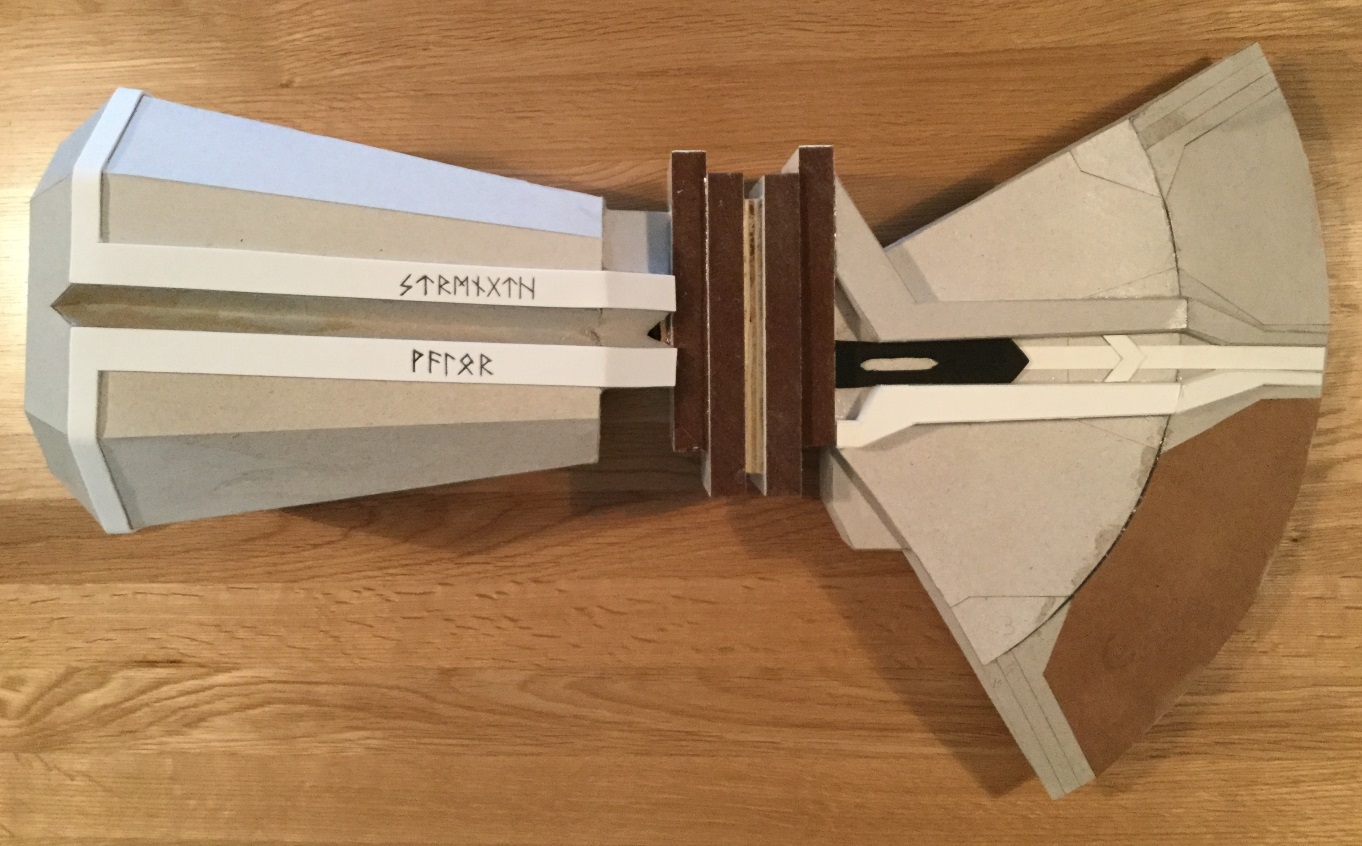 At long last, I can move onto the fun part of this build: painting!!

After sealing all of the foam with PVA glue, I began with an undercoat of grey acrylic. Once this had dried I painted all of the appropriate sections silver before painting the rest in a darker shade. To recreate the interesting mottled effect on the original prop, I drybrushed plenty of silver paint onto my Stormbreaker before using black paint and a very fine brush to accentuate the detail lines. Finally, I brushed over the detail lines with more silver to make them appear less pronounced. 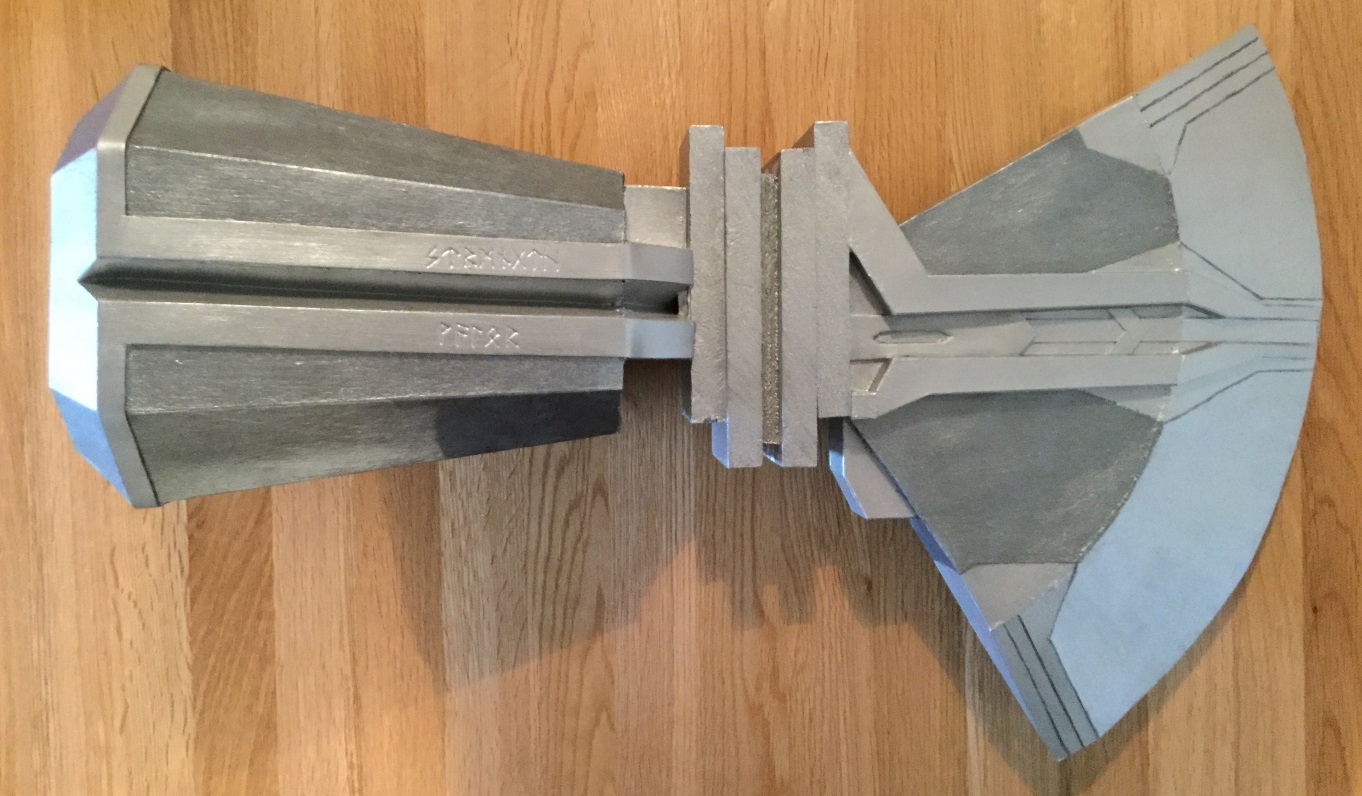 For the core of Stormbreaker’s handle, I used a length of metal tube – both to add more weight to the finished prop as well as to support the extra weight of the partially-wooden axe and counter-weight. To create the shape of the handle I used Herban-Props/MasterMod’s pep files which I modified in the first post – assembling them using cereal box card to create a “sleeve” that could be slipped over the top of the metal tube. Then, to prevent the tube from shaking around inside the sleeve, I wrapped it in strips of corrugated cardboard until the two could fit snugly inside one another without the need for glue or tape.

Unfortunately the Pepakura handle had a slight curve in it (something which was based on the Hot Toys accessory rather than the original prop) but thankfully the metal tube straightened out the handle, accidentally making it more accurate to the film. I then coated the handle with paper mache to strengthen the cardboard and create a smoother base for adding the wood details later on.

Finally for today, after hammering the end of the tube so that it could be pushed into place between two of the wooden blocks that make up Stormbreaker’s mid-section, I secured it into place with some two-part epoxy. The two halves are now fused together and definitely won’t be coming apart any time soon.

Do you the pep files? Or know where to get? I made a stormbreaker out if foam but the counter weight didn't come out quite right so could do with making a new one and would really help...

Thorlief Golmen said:
Do you the pep files? Or know where to get? I made a stormbreaker out if foam but the counter weight didn't come out quite right so could do with making a new one and would really help...
Click to expand...

I'm really sorry but as I mentioned in my first post, I don't have the full version of Pepakura Designer so I can't save the final unfolds to share them.

To recreate the vines for Stormbreaker, I rolled up sheets of newspaper and wrapped them around the head of axe, before coating them in paper mache to strengthen and blend the vines into the rest of the handle. Then, to give the handle a rougher, more tree-like texture I gave it another coat of paper mache (this time using kitchen towels.) 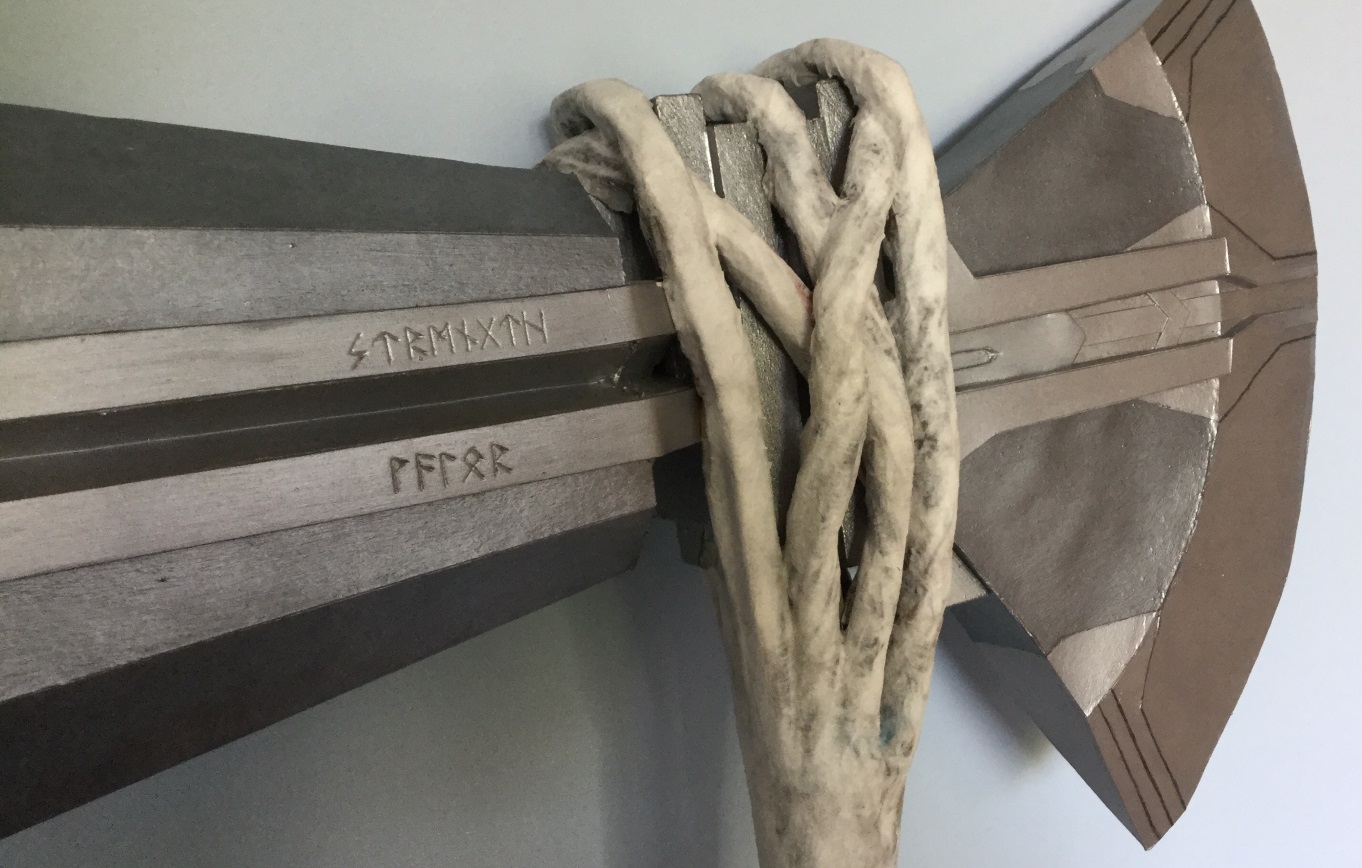 To paint the handle, I began with a 'cinnamon brown' undercoat - followed by a heavy dry brushing of lighter brown, followed by a much gentler dry brushing of darker brown. Overall I'm really happy with the mottled effect of all the different shades combined with the rough texture of the paper mache; it actually has the look and feel of real wood! 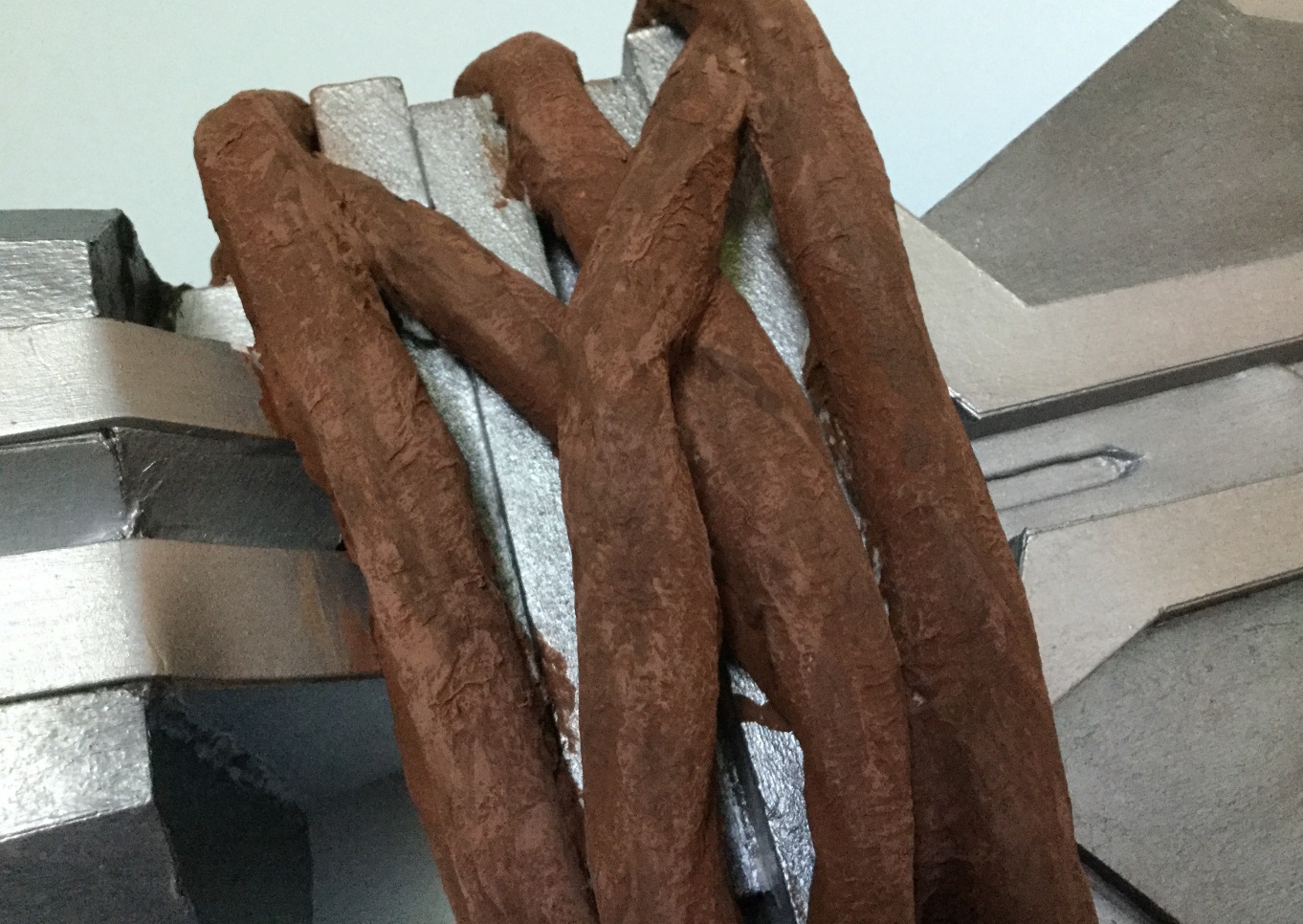 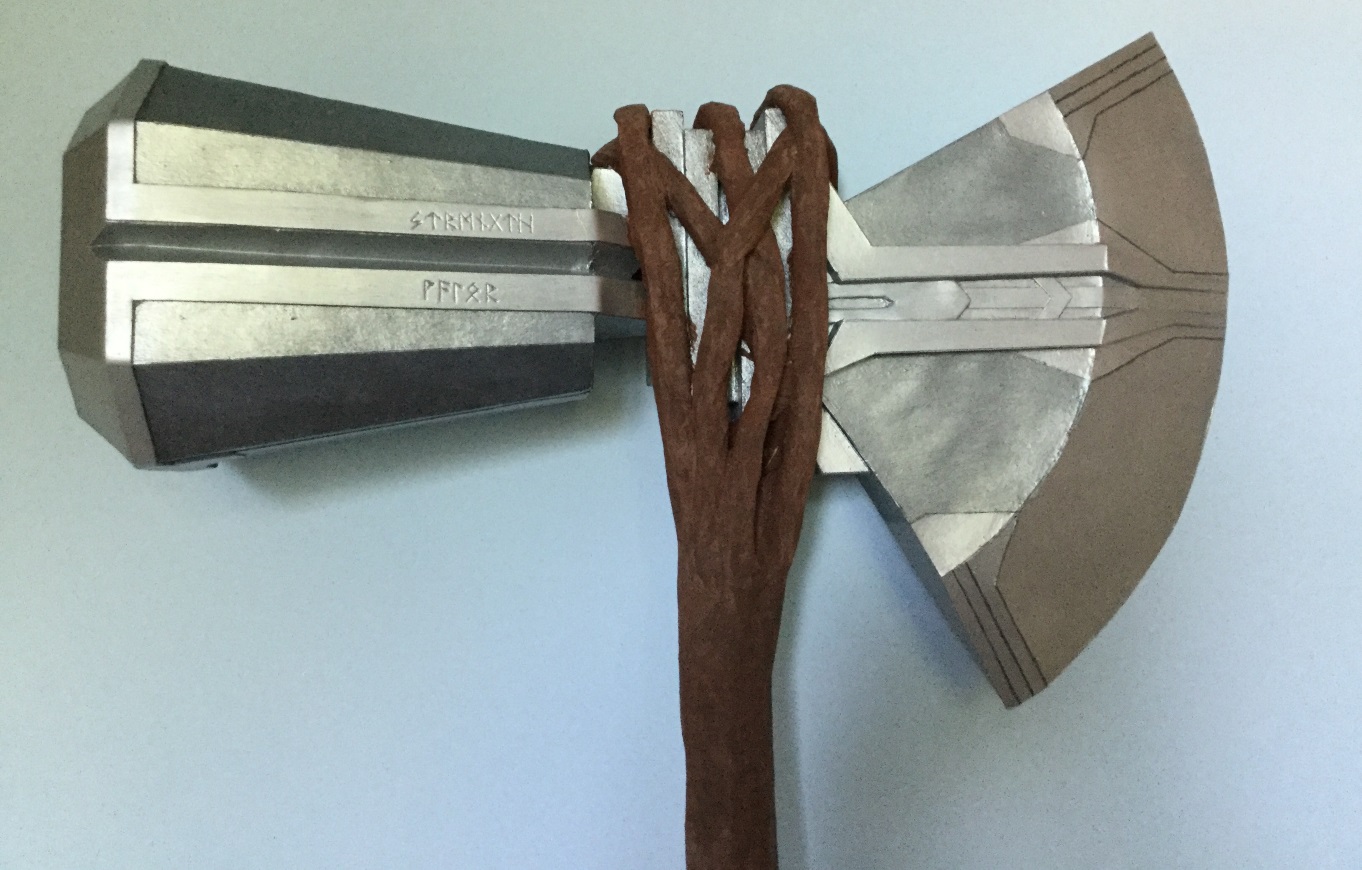 Finally, for the "impact disc" on the back of the counter-weight, I built the Pep file from my first post using more cereal box card (only using foam for the centre circles and the outer ring.) After sealing the foam and painting it dark silver, I began drawing on the raised Norse patterns using silver 3D paint - tracing over the designs twice to get what looked like the correct thickness.
I then brushed over the disc with a black wash to accentuate the raised patterns before gluing it onto Stormbreaker. 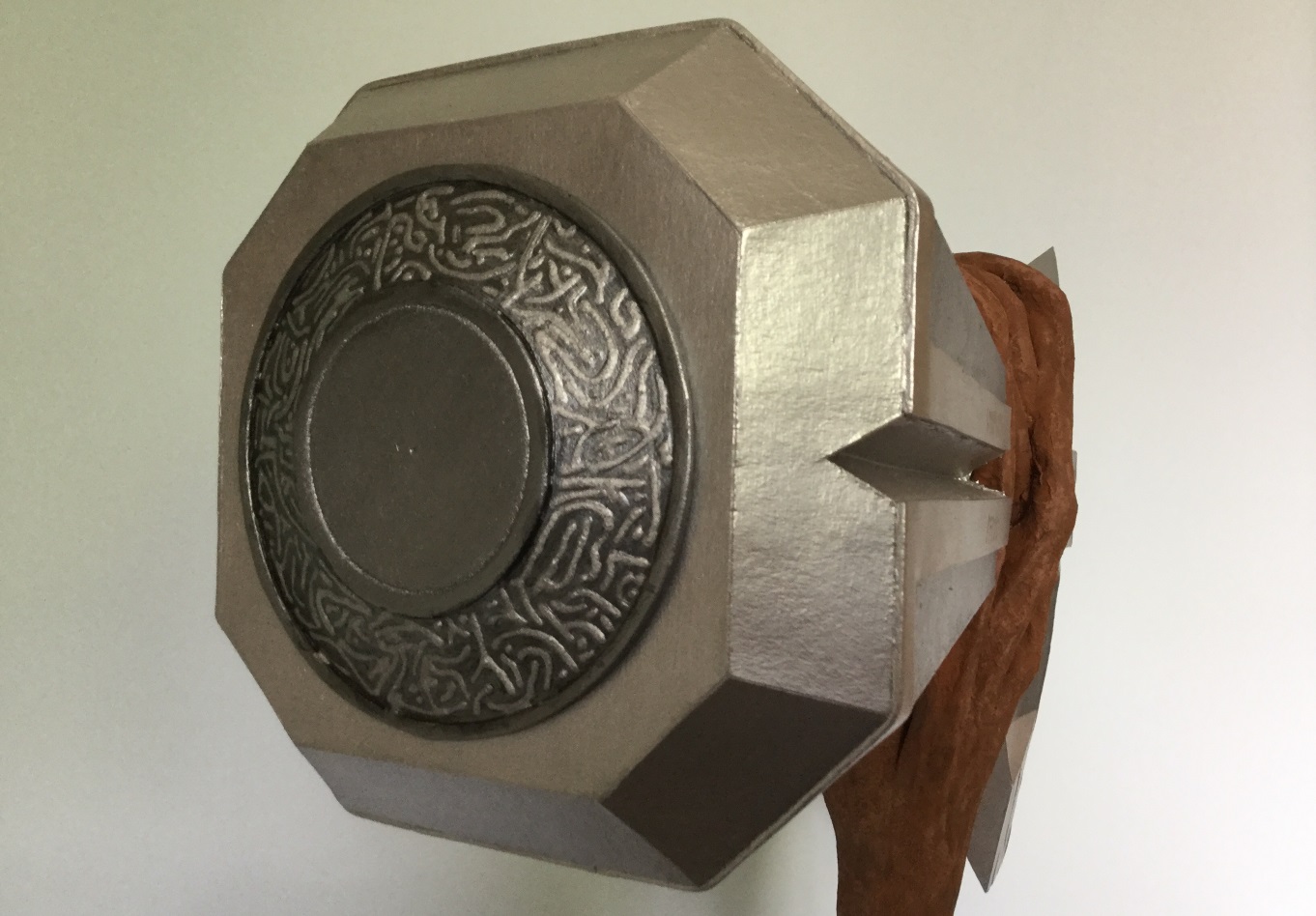 And that concludes my Stormbreaker build! I'm really, really happy with how this turned out especially considered how I managed to build this completely for free and in just 2 and a half weeks! I'd love to know what you all think.

I tried my best to trace the templates in Inkscape and got these. I hope you don't mind, and if you do I'll gladly delete this comment. StormBreaker - Google Drive