Okay guys, this is going to be my first attempt at doing this on a large scale... I hope to find time before Steamcon here in Seattle to get it done. I know this will be a long process for me due to my schedule, but I will give it a try.

As always, inspired by the great artists on here and hope to add something unique..


My idea will be based off of a figure I customized, yet, I want to include a bio. I think at this point it will be easier to buy a P1 bio from someone and mod it up, but he rest I must do on my own!! I will be changing the color and the project will change I know. I am wanting to do a crazy blue/white/black/orange/red color pattern on the skin. Then copper and brass tech.

If anything, I think it would be cool to get down to SDCC next year with this...

The story is that during the hunt, this hunter went to a through to a dimensional warp in space to that brought him to earth, but to an earth were tech didn't evolve beyond the steam age. During his travel, the shipped crashed and he was found, nearly dead and badly wounded, by a scientist obsessed with clockworks and preserving life in a way a way that keep beings alive and under control. Little does the scientist realize that the hunter is much stronger willed than anything he knows. Rebuilding him out of spare parts found at junkyards, the scientist reconstructs the armour, tech, and finally pred's body. In an attempt to control the pred, he losses control. The pred is confused and is unaware of what he is, or what happened, he becomes the hunted by the scientist's other twisted creation's. However, along the way, he discovers his inner hunter, and then does what he does best in defending himself, he hunts his hunters. 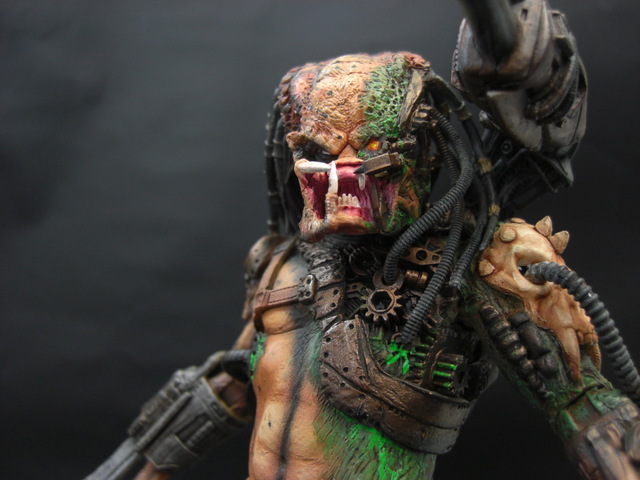 Nice customization and back story!

berserk_wolf said:
Nice customization and back story!
Click to expand...

Thanks... I am hoping it translates into a cool costume...

Great job, I enjoy seeing all the Predator figs you have worked on.

That steam punk Pred is awesome!! How did you do that? any WIP pics??

encline_designs said:
a demential warp in space
Click to expand...

tommynator1024 said:
That steam punk Pred is awesome!! How did you do that? any WIP pics??