So my last major scratch was from the PC game, Starcraft. While I would probably try and do something else.....I just really got that itch to do this ship.
While the Battlecruiser was a big heavy with guns galore ship, per in game, this is just a dropship (transport) that has no guns at all.
I liked the look better than the 2nd game. Plus they changed it in part 2 to also heal units and renamed it, medivac.
So here is a bunch of angles I screen captured straight from the 2017 remastered version. As you can see, there is no bottom view, so using just a little bit of art, some fan made, I can mostly have some fun with it.
As far as the top, I plan to keep it close as possible, although, going to go with a deep blue like the battlecruiser.

Heres a nice and pretty accurate fan made render I found. 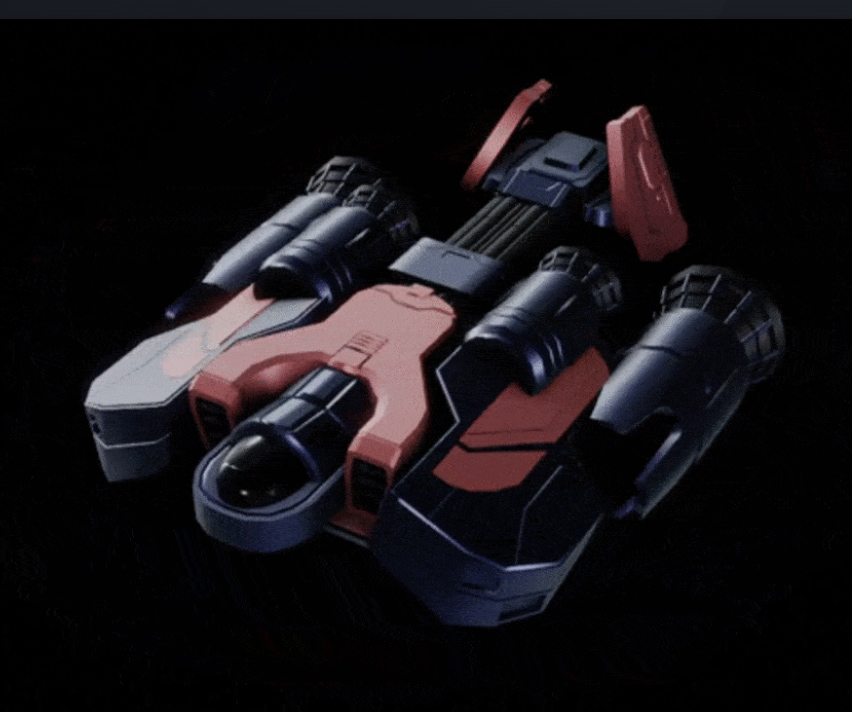 Less accurate, but you could rotate it on the browser, so it gives me some good ideas, and for how the bottom will work and where the units would be at for transportation. In game, you could transfer 8 small units like marines, 4 midsize, or 2 tanks. Realistically, I think even one tank would probably be too big, so I'm not going to really worry about that. 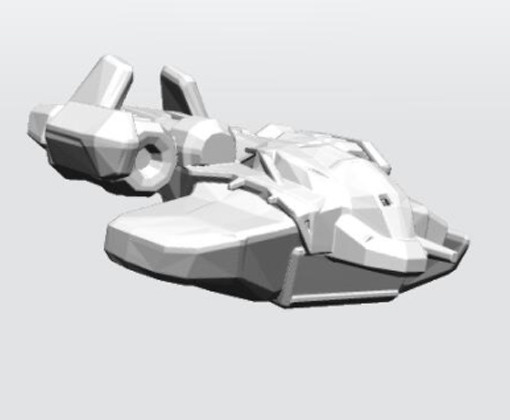 So back in October, I actually started doing a little research. I knew the part I wanted to get figured out first was the roundish cockpit. I really didn't know how to go about that or where to use...but, I thought, what about gumball machines that give the little capsule prizes.
But instead, I found something similar thats meant to be a tiny display. The site only let you buy if you spent like $20, or $25. So I got a few tiny ones and one bigger one just incase. You can see I already marked one of them to prep it.
I chose the small one and have sized the whole model around that one part. The battlecruiser was done the other way around and I sized it around the 4 back thrusters. 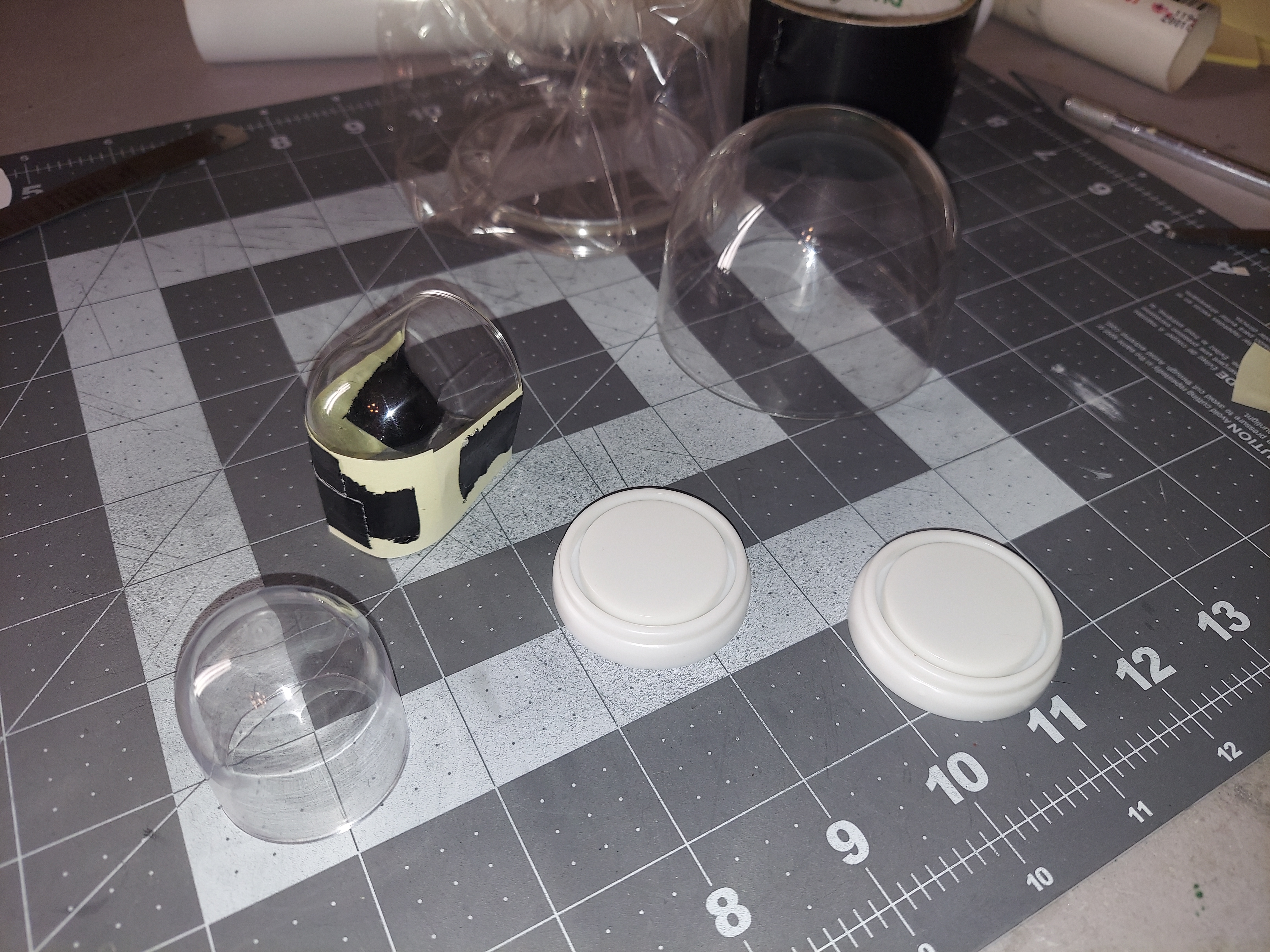 Heres my measurements so far, using the ruler in photoshop. I hope I can get it as close as possible to all this. The neck biggest issue was the back thrusters, as the the two outside ones are bigger than the two inner ones. I believe I have it all figured out already. 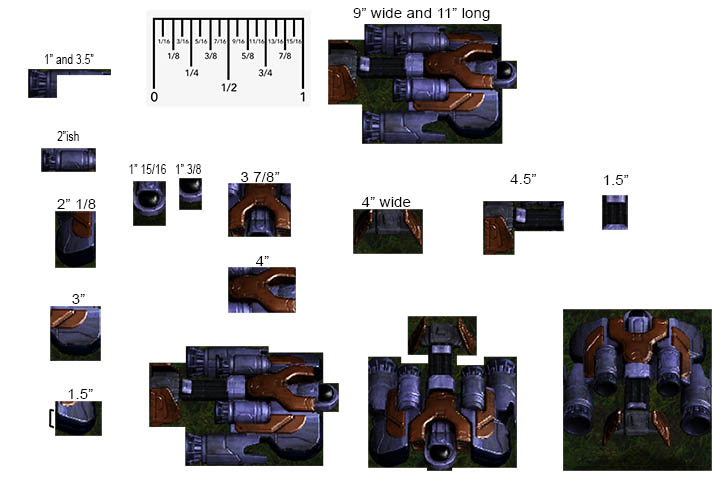 I went and cut the round plastic display and it looks like it is going to work perfectly. The top part in game is a slight bit flat, but not going to cry over that. 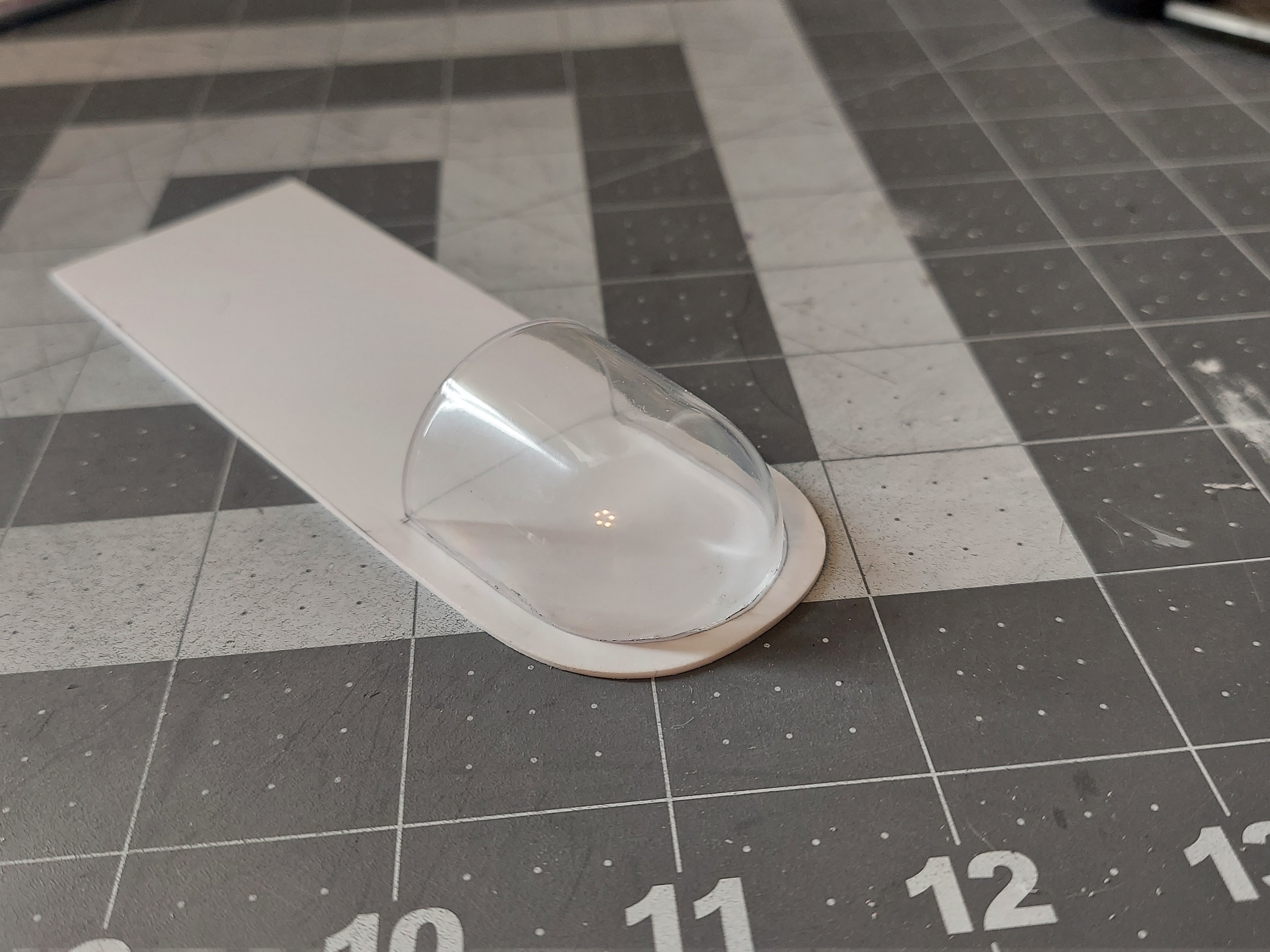 I also went to Lowes yesterday and spent about an hour fitting pieces together and seeing what might work. They probably were watching me on the camera trying to figure out what I was doing. Got $10 of stuff. Also went to my parents and raided my Dad's random junk. 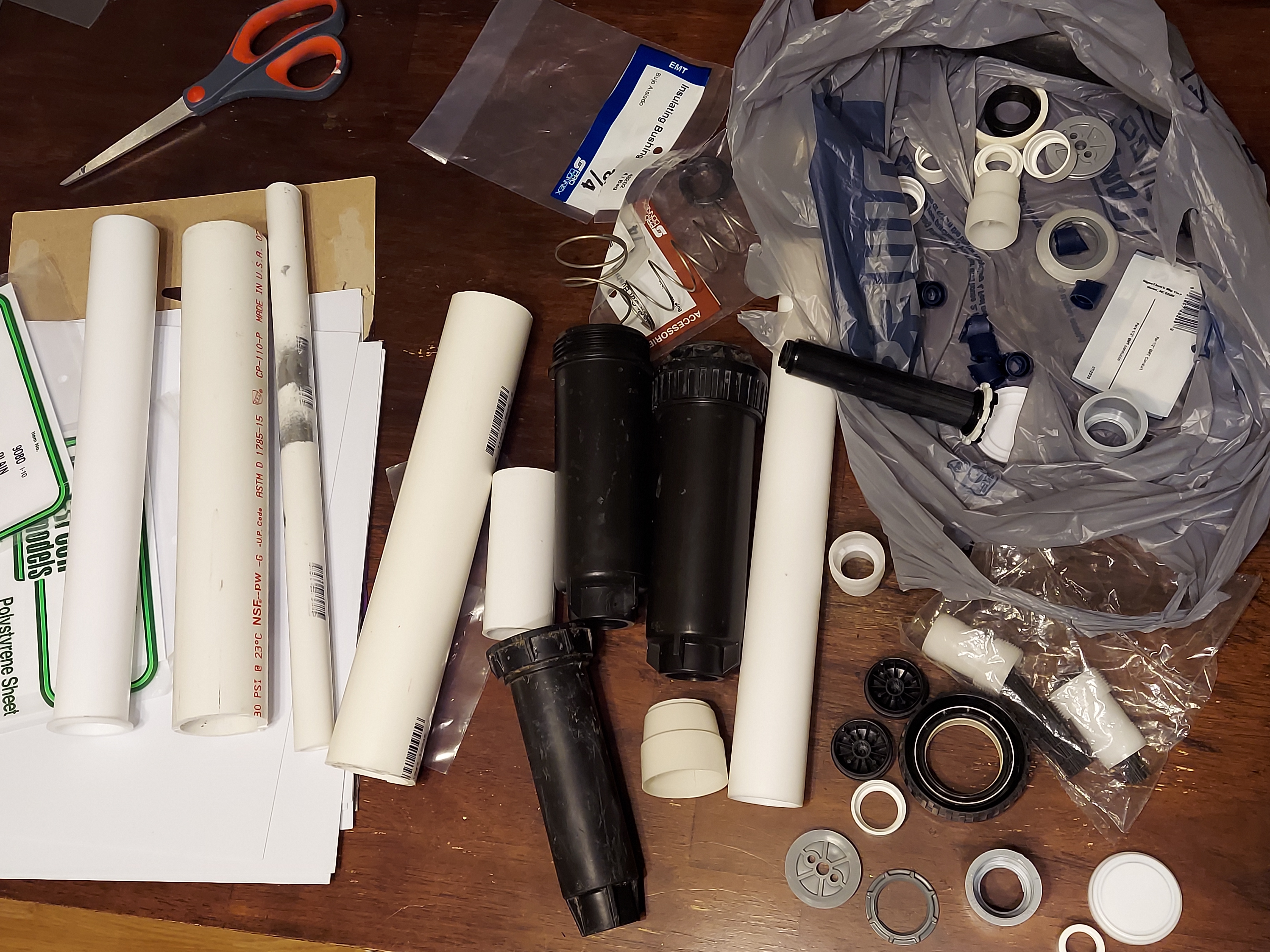 I found that the bottom of the display case actually fits in the pipe I have for the bigger thrusters. 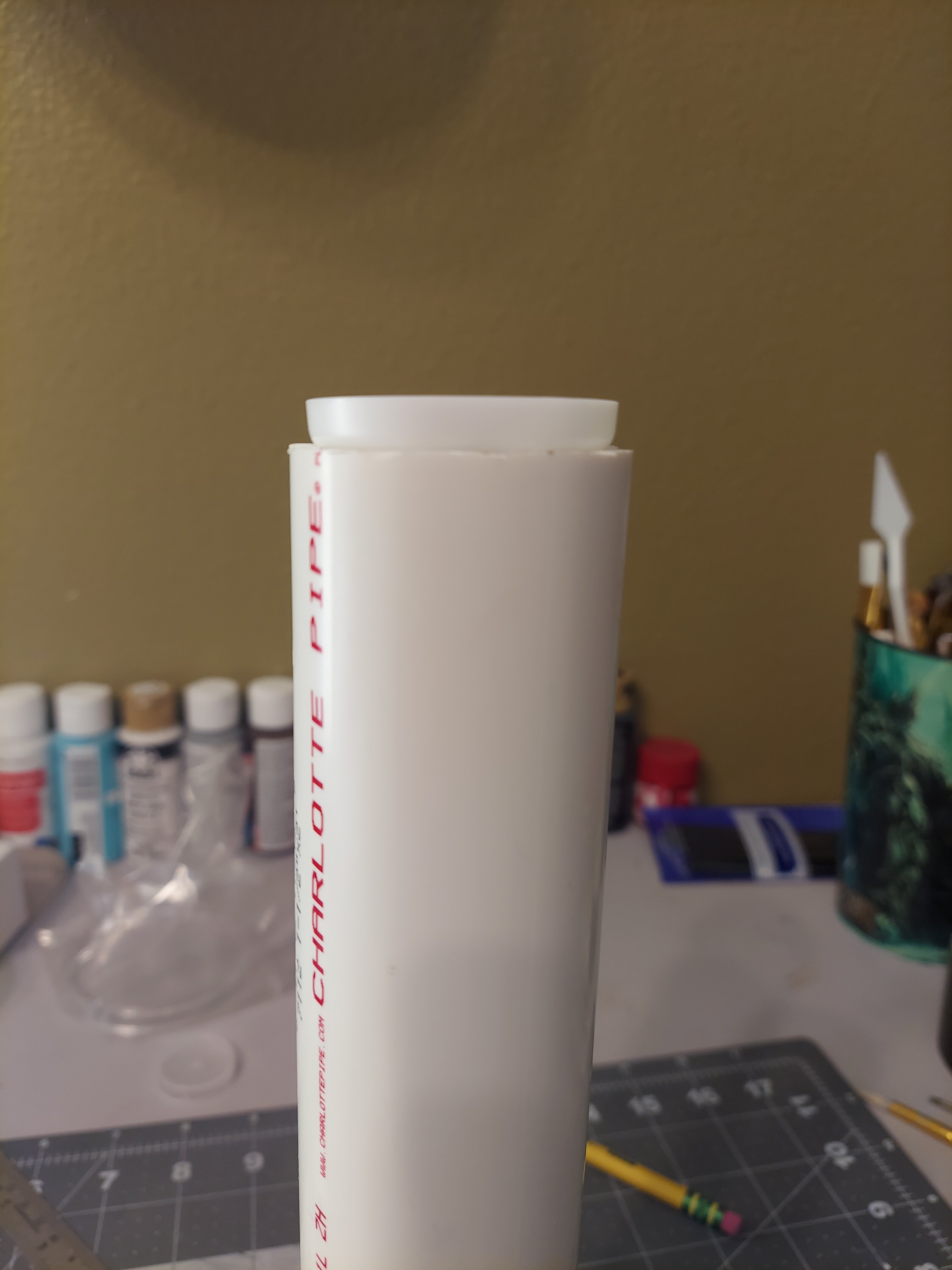 Also, with those two side thrusters, you can't really see inside the front part, its just kinda dark, so I knew I wanted to add something to look more realistic.
Back in 2016, my old car, a Dodge Caliber, the AUX on the stereo broke, so I ended up buying a new one. I have used parts little by little from it. Well, the volume and radio station knobs turned backwards should be perfect with these gray things I found years ago. 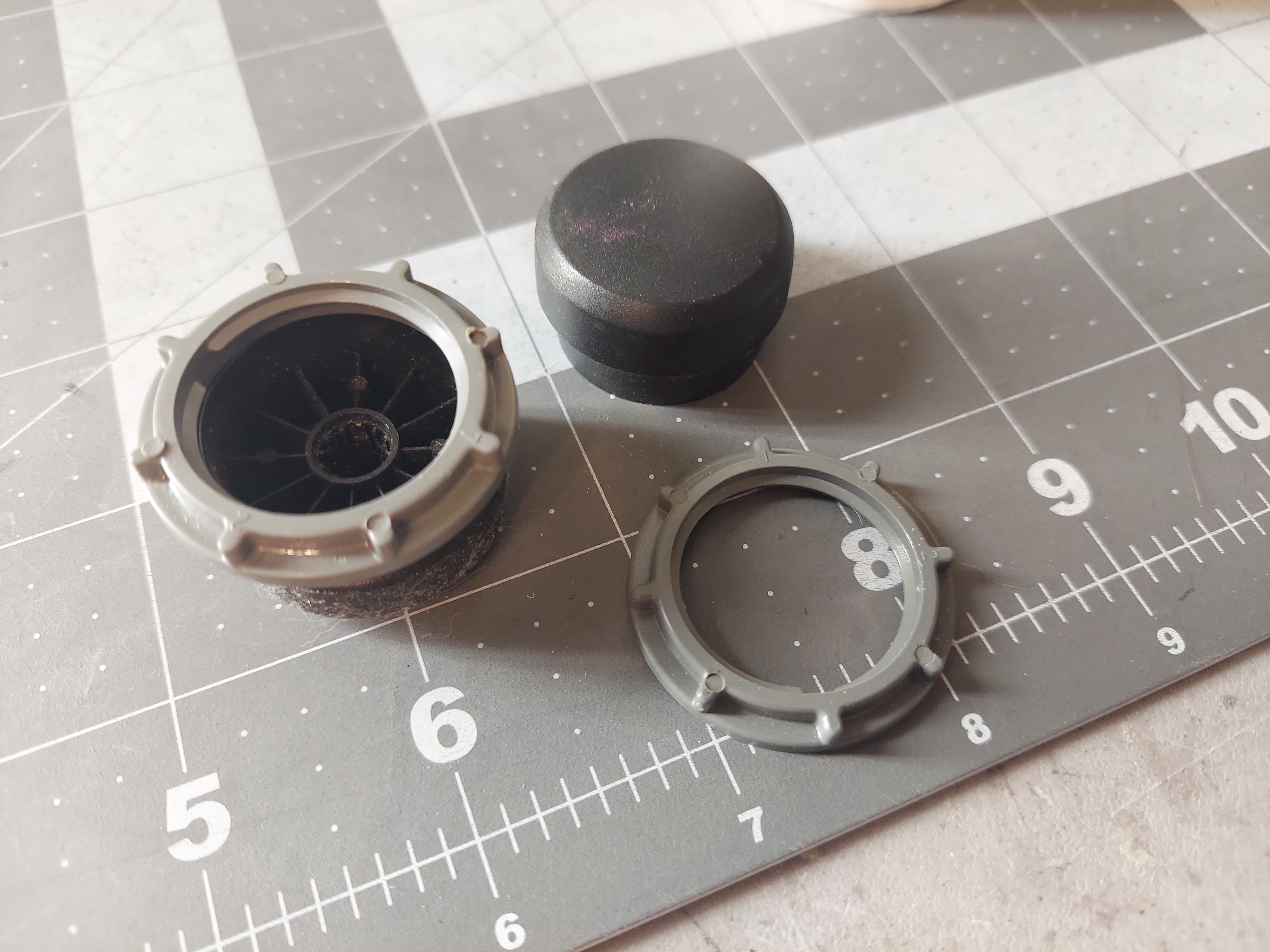 So I'm not too far in it yet, but you can see I have a plan and will post things as I can get them done little by little.

Did a little more, just not as much as I'd like. (Pretty much all of our life story)
This is one of the smaller thrusters.
I have a few more parts to mostly ready, just not quite yet.
Front towards the left side. 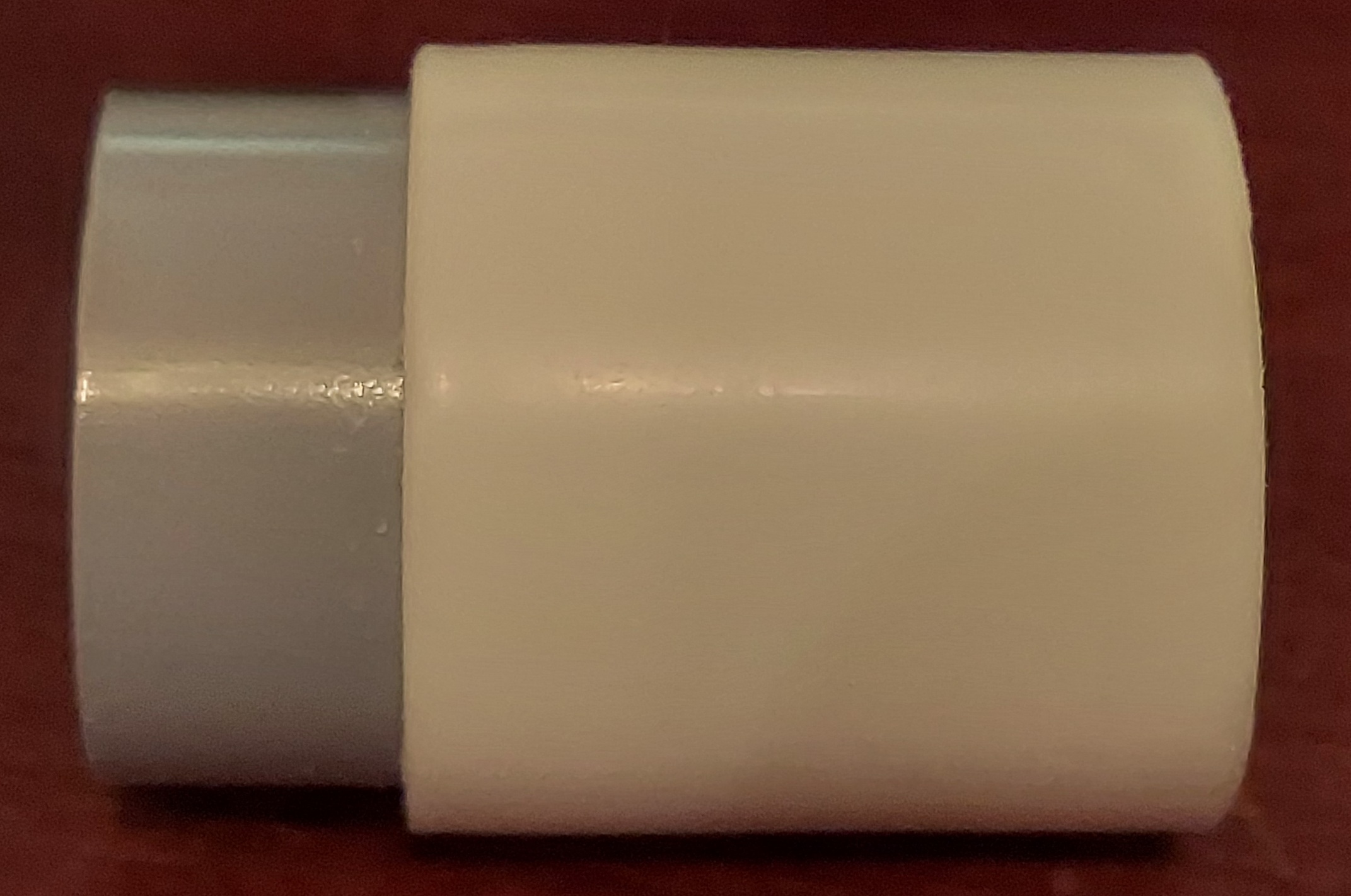 One of the parts my Dad had was this coned shape piece that I am trying to figure iut qhat it is.
Maybe some type of pipe reducer, but, couldn't find anything like it when I went to Home Depot tonight.
Going to check out a pipe type store if I get the chance tomorrow. 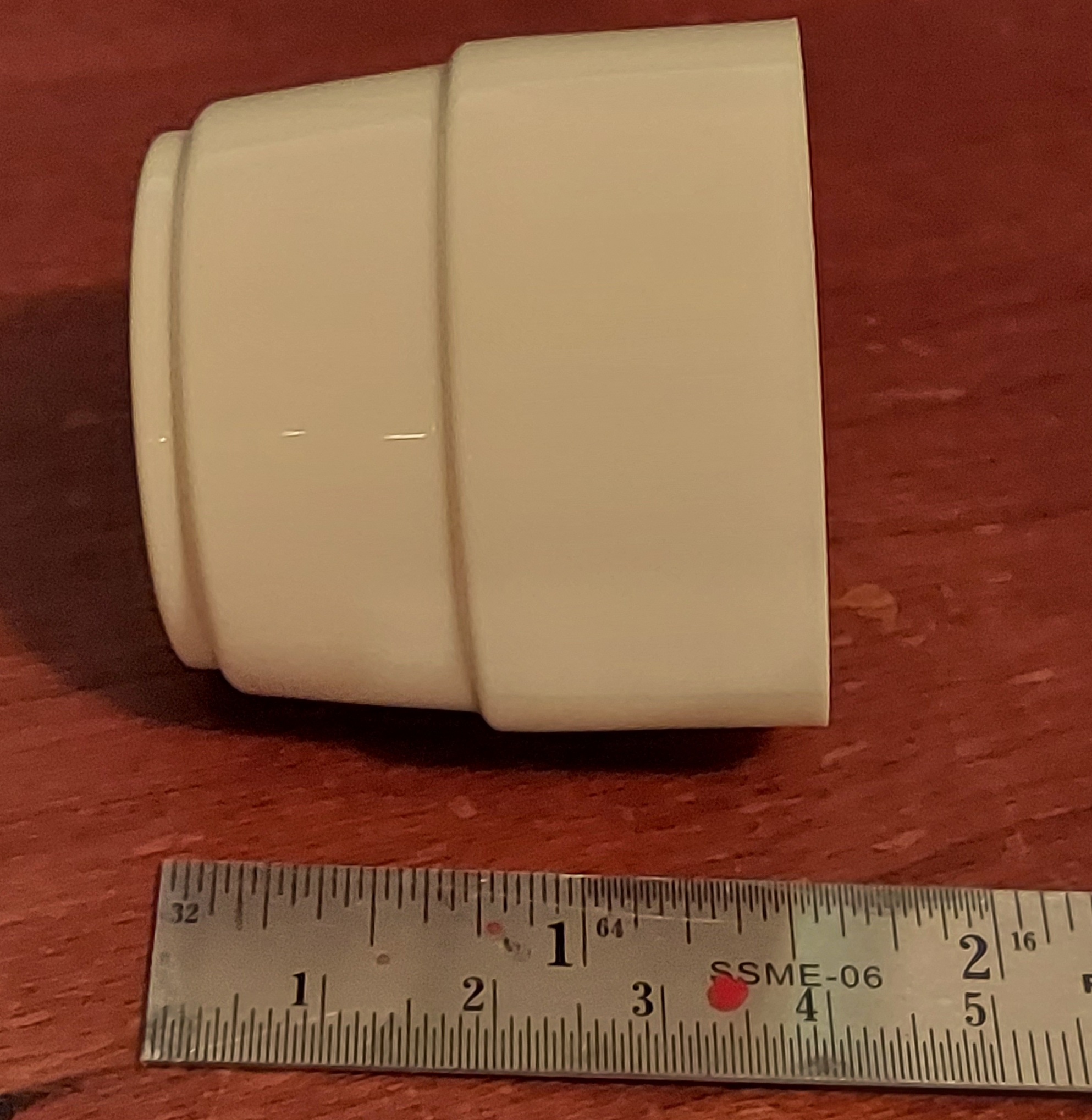 Want to make this the back end of the thrusters, but, I need another and two more just a bit bigger and then decorate them up some more. 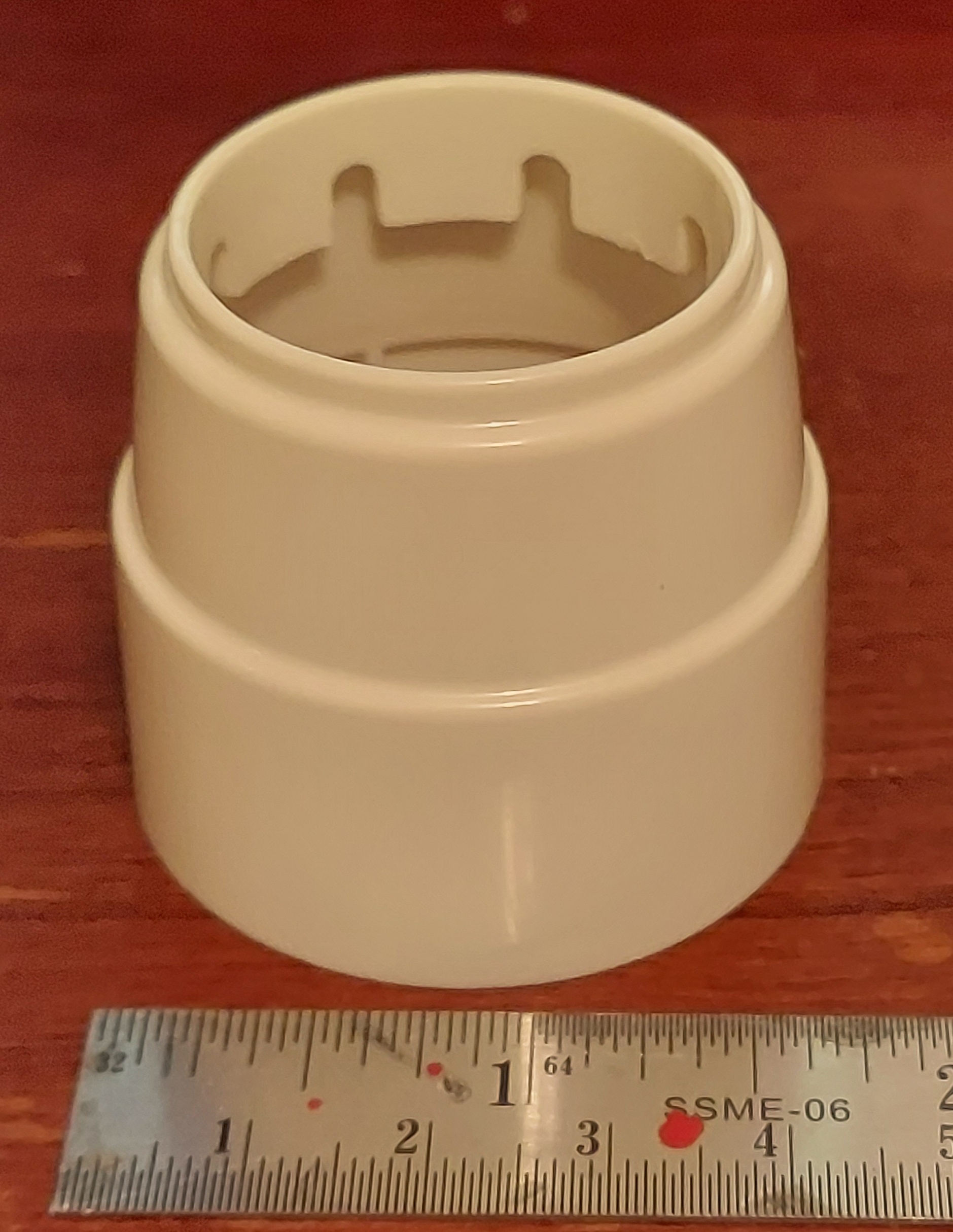 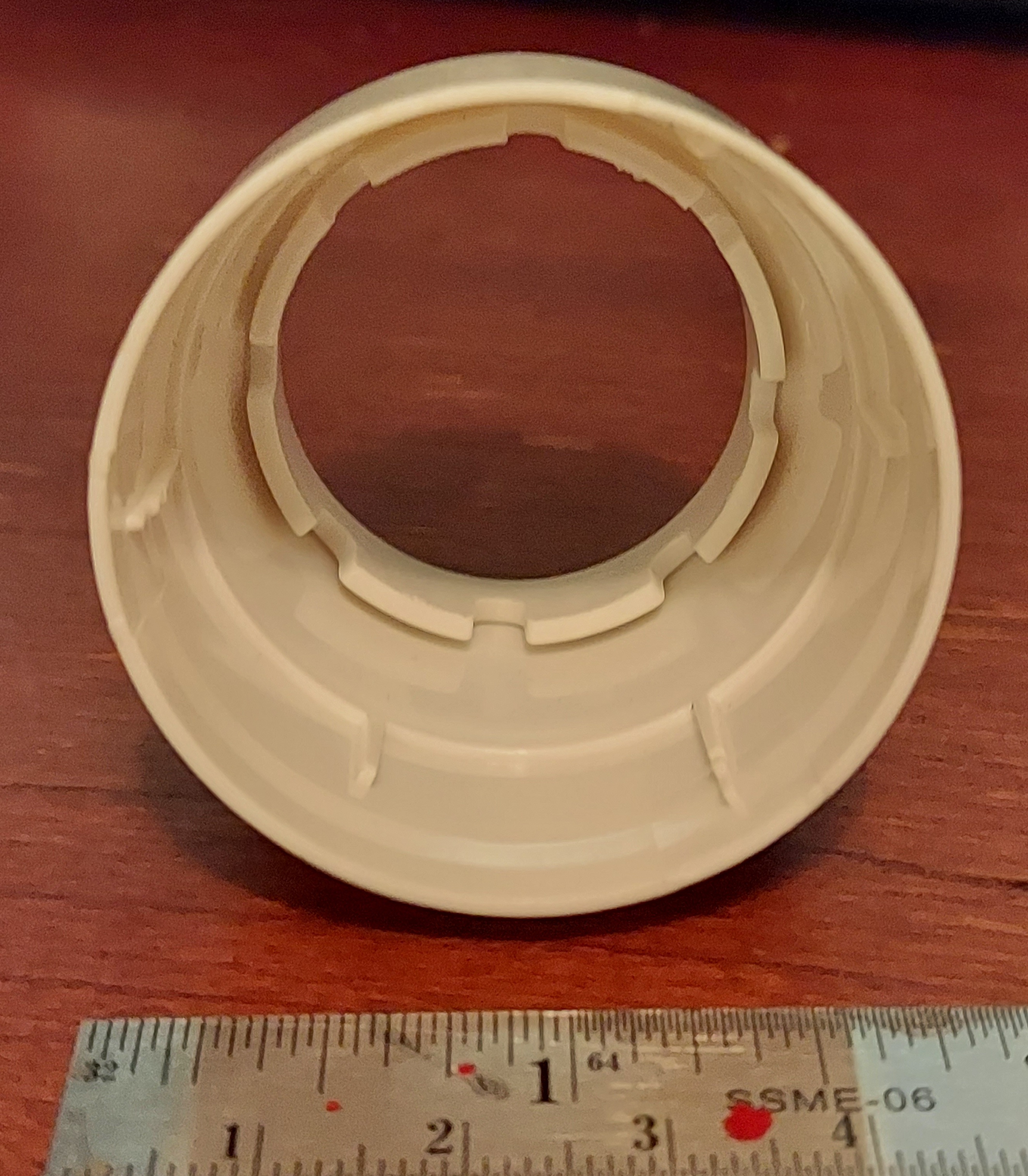 This one fits perfectly, although might have to trim the end a little.....if I can find more. 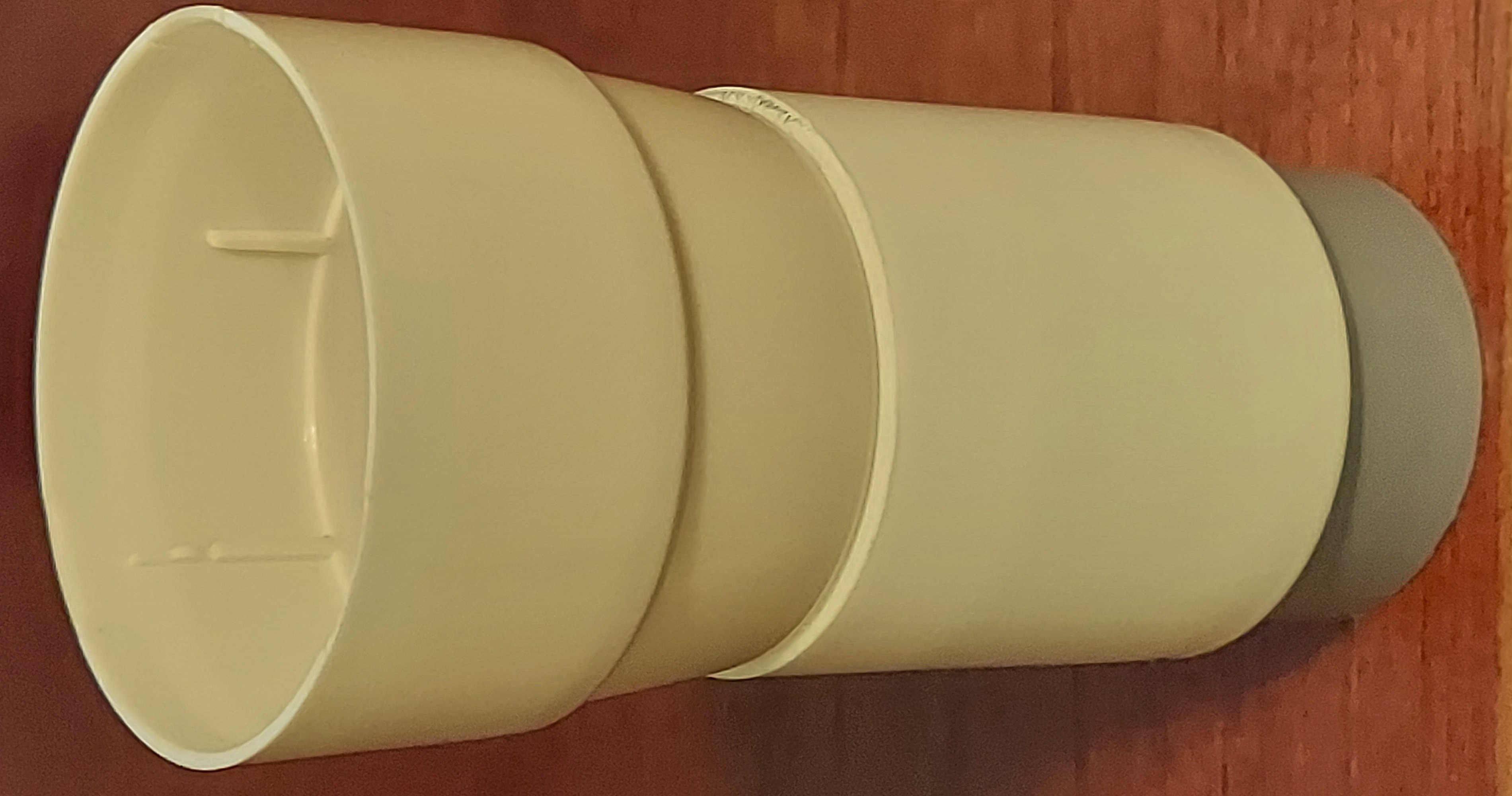 There is also this piece, which I might have found online, but the picture on the site isn't very good. I do see something called a plastic slip-joint washer. While I did find something like this at Home Depot, it was made of a bendable rubber, not harder plastic. 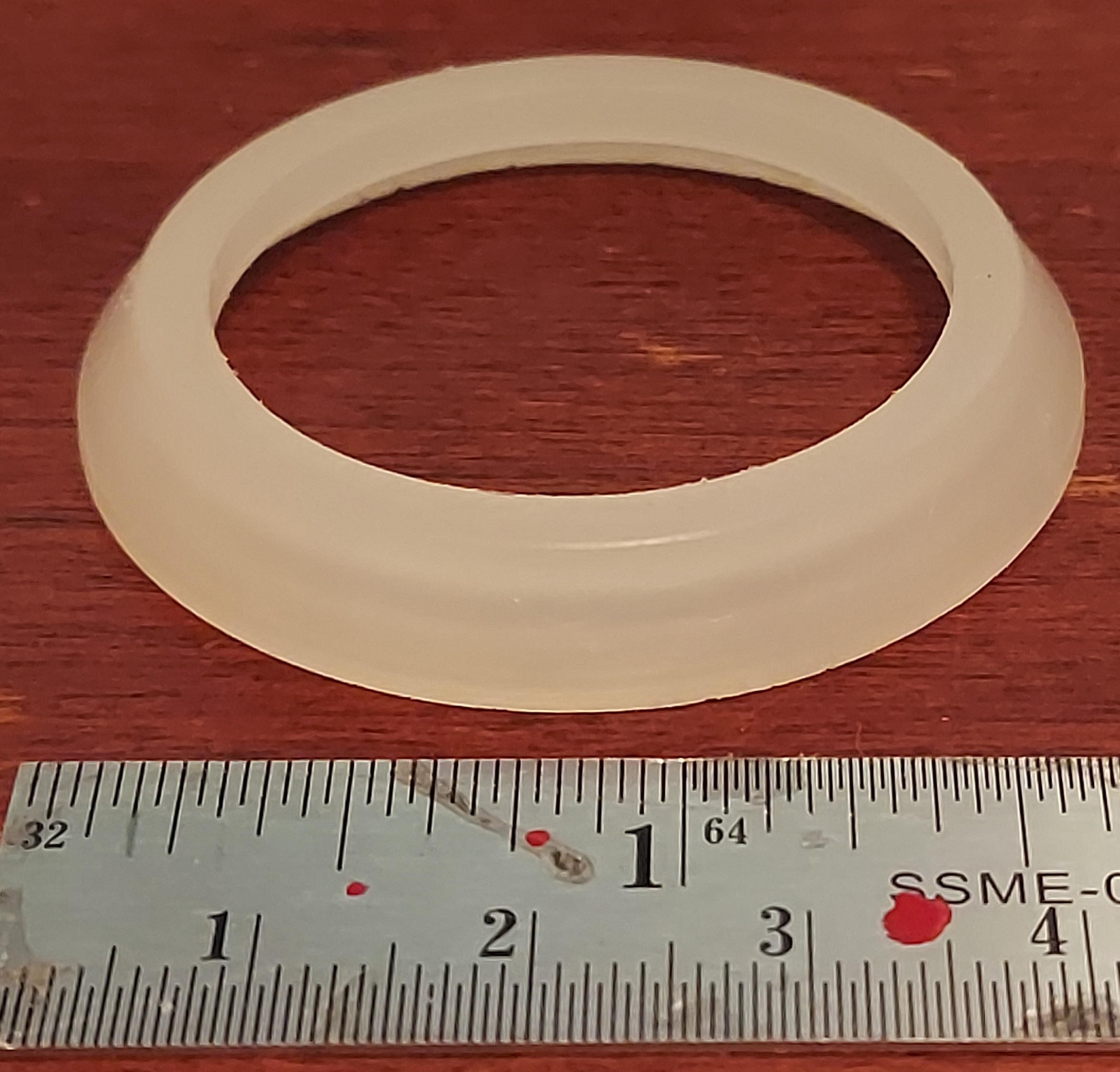 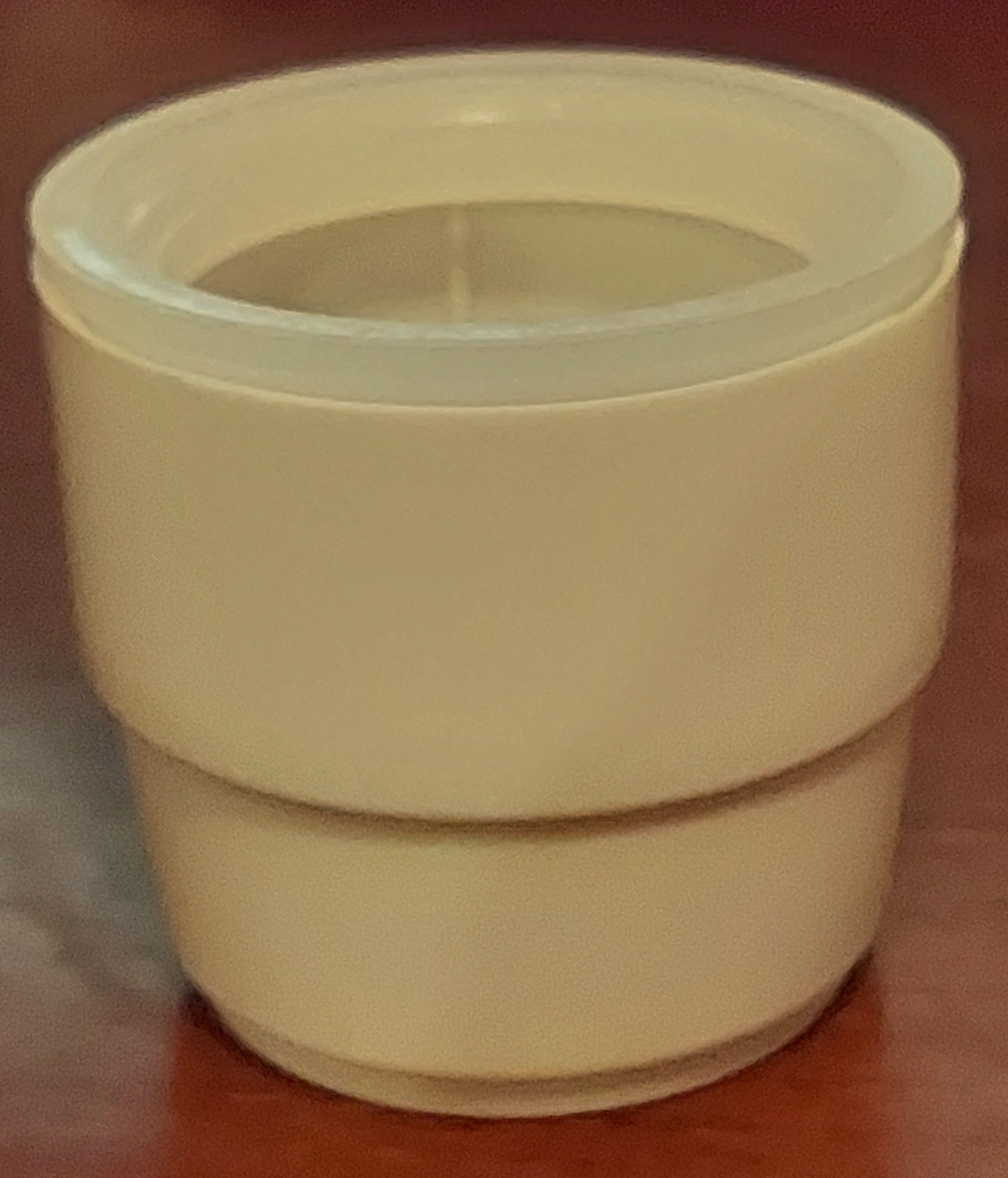 So the white part I described above, no place seems to know what it is. So I think I'm out of luck finding anymore.
It must be something so completely random and different than my Dad thought. Maybe even just a part to hold something in a package...or whatever.

But, I WAS able to get these parts and bought a few. That will at least help for some stuff. 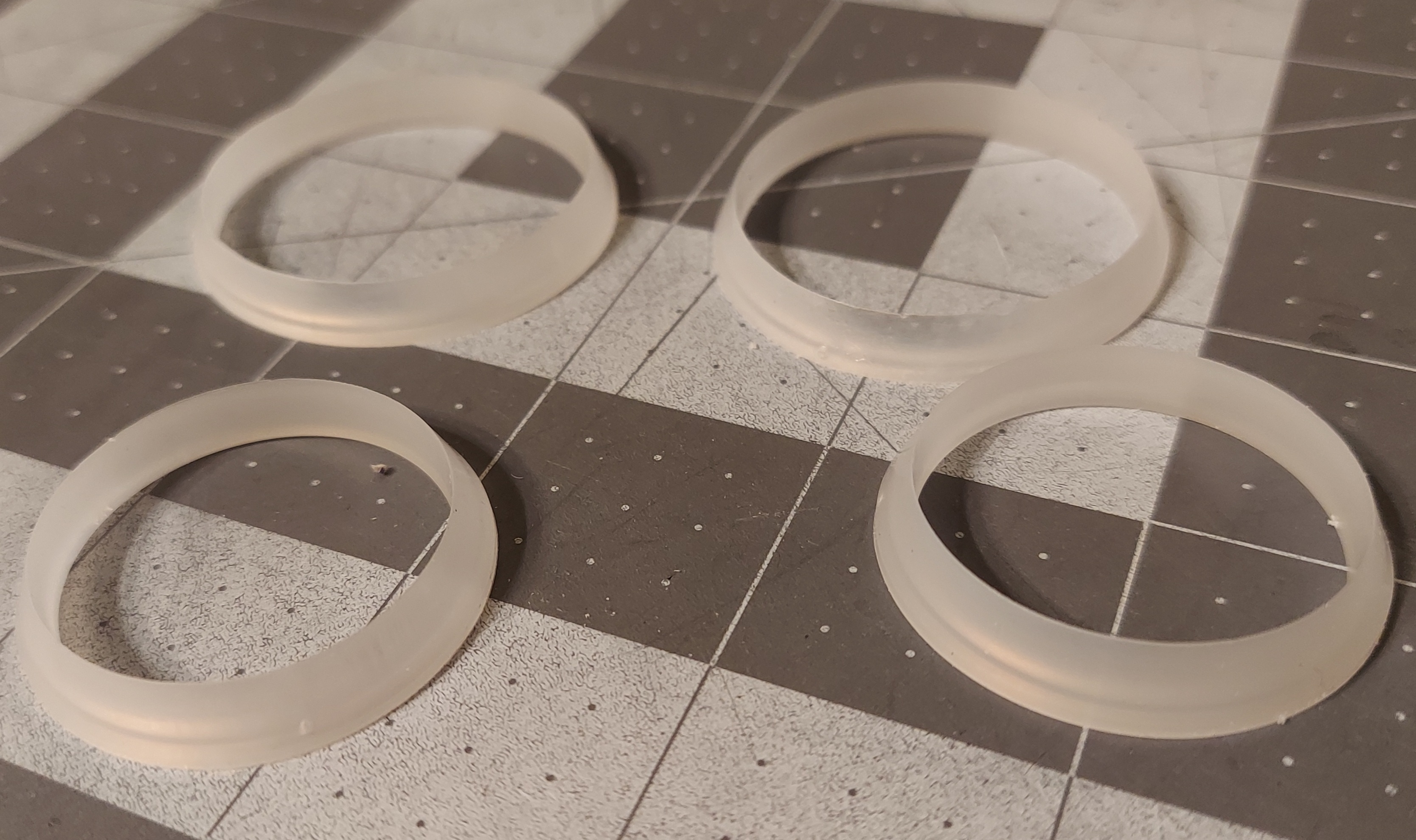 The cone-shaped white piece is from a floor fan, I'm 90% sure: 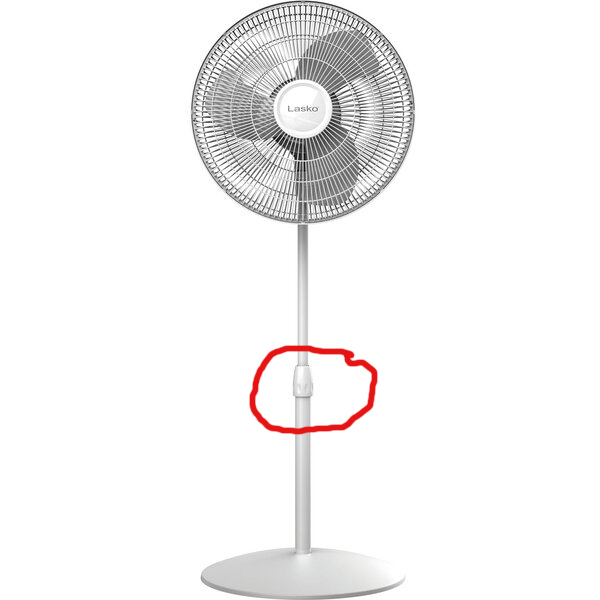 This isn't the exact fan, just something to illustrate. I've saved a few over the years in my bits box myself, but as there are a million different fan designs out there I'm sure it would be very difficult to find the exact same one. Could be something else, but the inside especially looks like that's what it's from, since it has kind of a slip fit onto the bottom tube and the "fingers" allow it to do that.

Rogviler said:
The cone-shaped white piece is from a floor fan, I'm 90% sure:


This isn't the exact fan, just something to illustrate. I've saved a few over the years in my bits box myself, but as there are a million different fan designs out there I'm sure it would be very difficult to find the exact same one. Could be something else, but the inside especially looks like that's what it's from, since it has kind of a slip fit onto the bottom tube and the "fingers" allow it to do that.
Click to expand...

Hmmmm, alright. Guy at Home Depot was thinking it was something that connects to something else, like this. And very true, might still be something else entirely, as this has no threads on it. I think I have an another idea to check on.
Guess a 3D printer could help with some piece like this.

Just went to Walmart, and there I am in the toothbrush aisle putting my plastic rings on the tops of every cap. I'm sure someone noticed, but I didn't even pay attention.
I think these 4 mouth wash caps will work, but I'll still need to trim and add detail.
The clean freak dry shampoo was just a possibility for a part that I didn't have with me....might not work, but oh well. It all only came to $15, so not to bad. 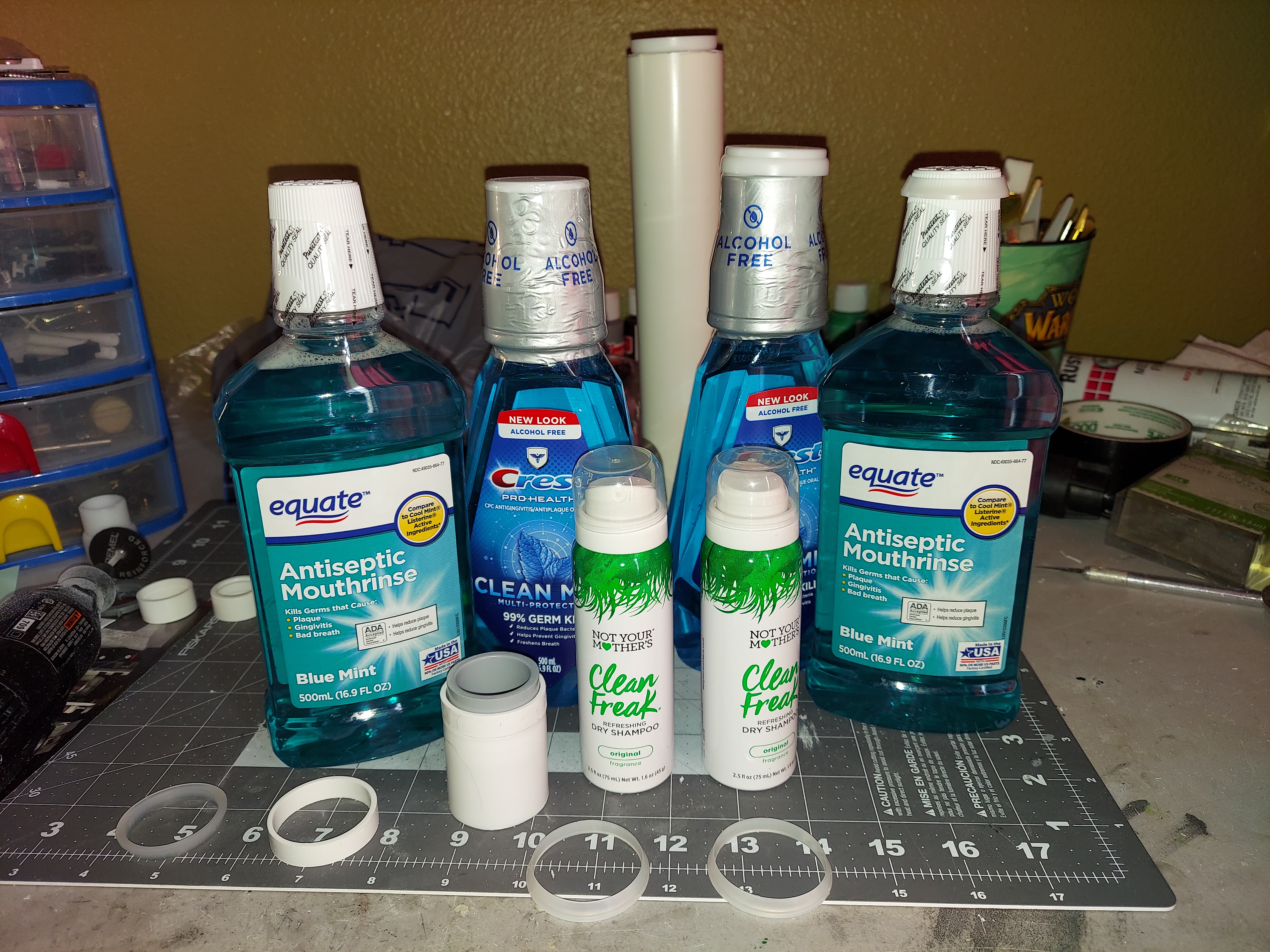 I have some 1-1/2" schedule 40 left over from the screens frame I made for the fireworks show last year.
This works for the 2 larger thrusters. In game, the front part is dark, so I can do a bit of my own thing here.
But, I didn't like the flat cutoff look. I remebered my work has a pipe threader, for metal pipes, but can also be switched out to bore inside edges. (Reaming is the closest term I could find for it)
Made some smooth cuts at home and took 2 pieces to work.
Started like this. 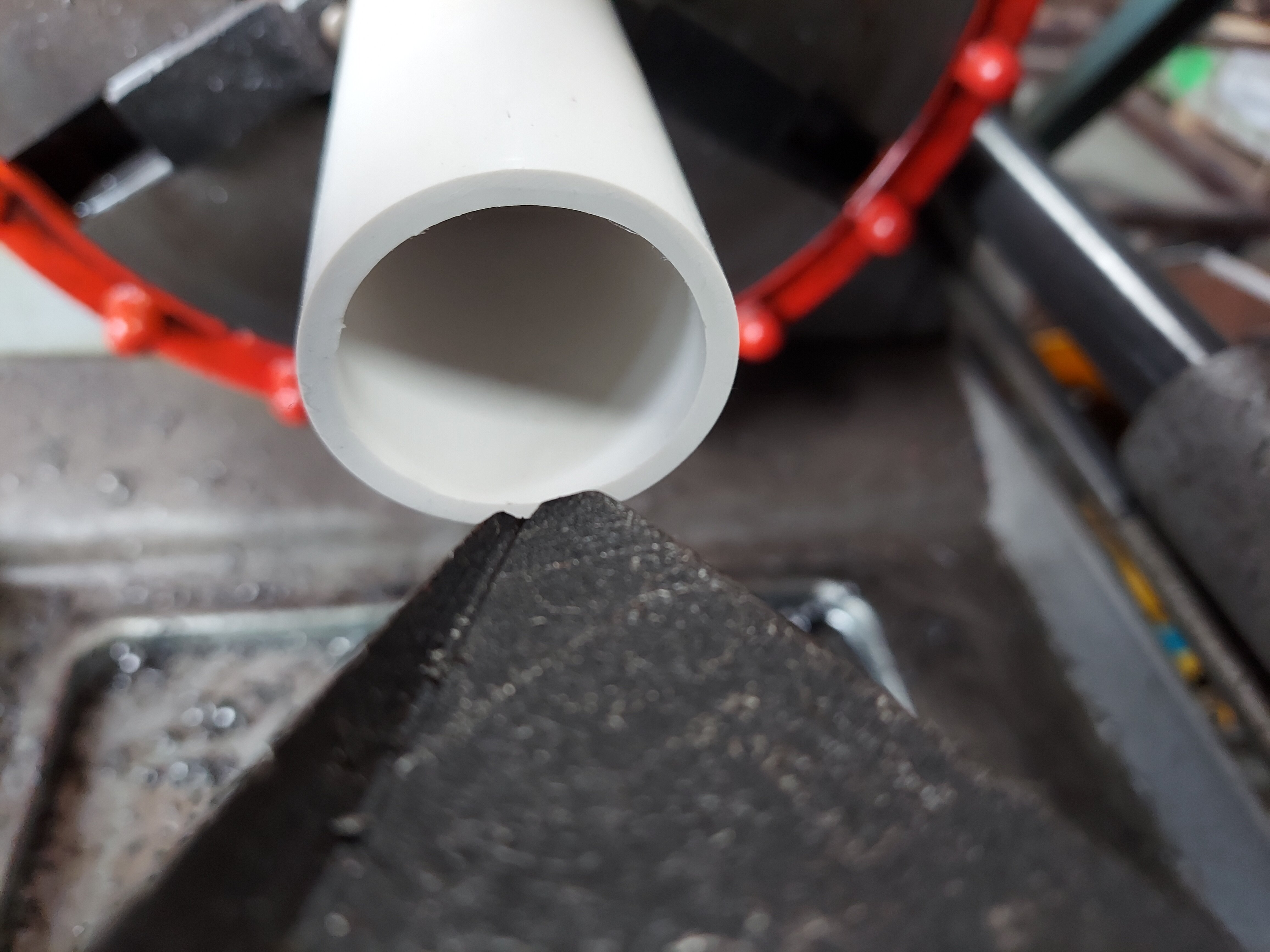 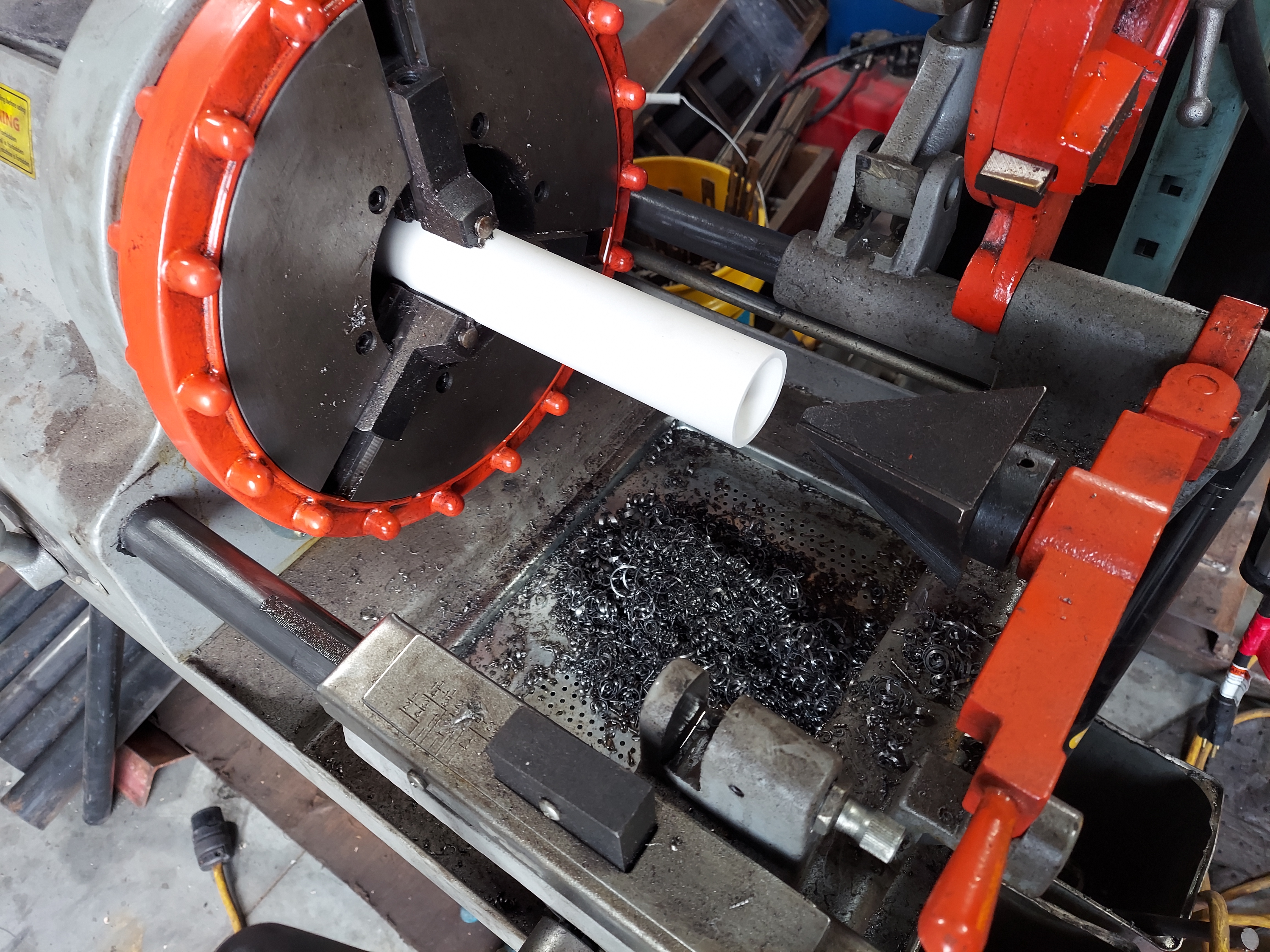 Was a bit nervous to try this, and mess up the edge I worked on to get flat as possible...but, both pieces turned out great. Just need some light sanding now. 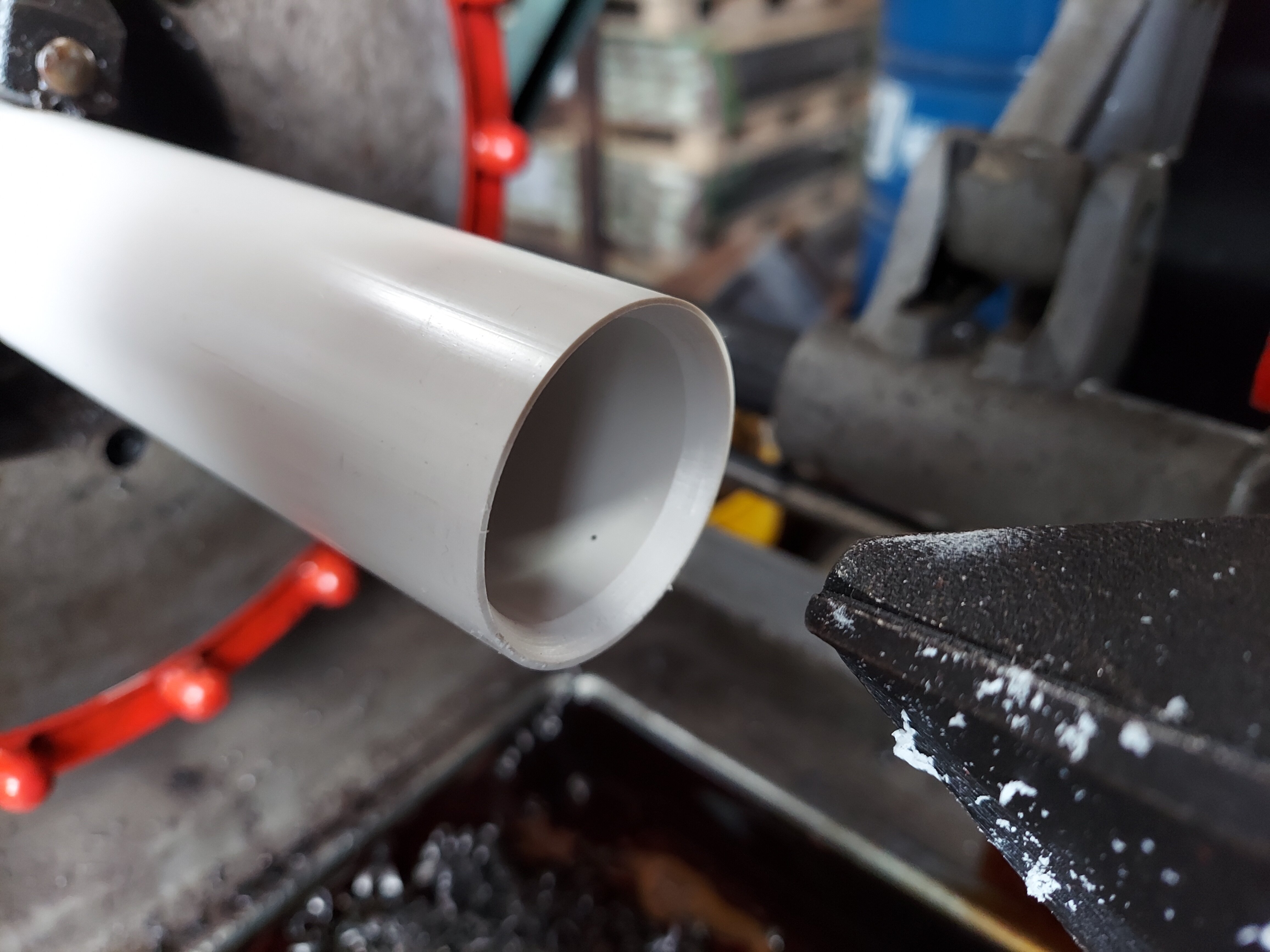 My submission for the Archive-X Speederbike competition