Does anybody have information that would be helpful in building an original series Star Trek red alert wall panel? I've identified the glass as Reed(ed) pattern glass, but this comes in various different pattern widths. The 1" Reed(ed) pattern seems to be the closest match. What are the dimensions of the light panel (not including the bezel frame)? What is the width of the bezel frame? How tall does the frame protrude from the wall (frame thickness)? Thanks! 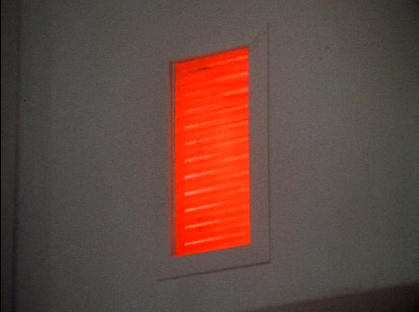 I'm paraphrasing a whole thread from the Fleet Workshop here, concave Reeded glass is likely, somebody mentioned the possibility of a fire extinguisher box, 12" x 6" was mentioned, though. You might extrapolate some measurements by using known phaser measurements from this framegrab.

How certain are you about a concave pattern? That style is called "fluted" glass, and everywhere I've managed to find information about these panels they mention "reed" glass (which is convex rather than concave). The refraction of reed glass versus fluted glass is different, and the reed refraction pattern is consistent with: 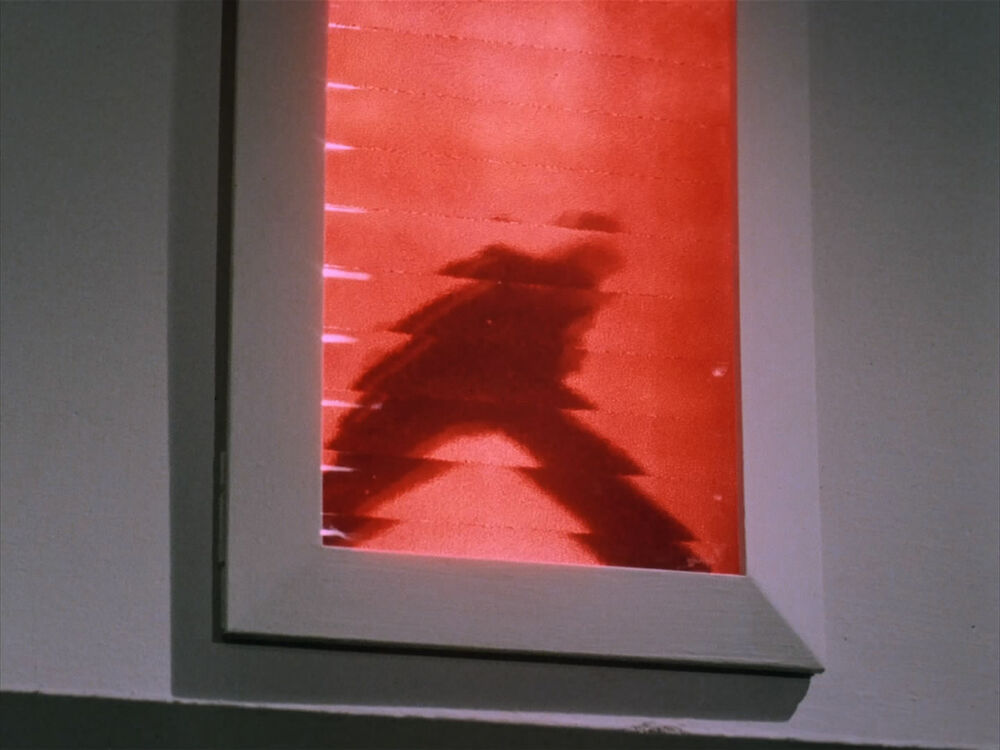 Also, the highlights and shadows seem to indicate a convex pattern. Notice the studio lighting shadow cast to the left and bottom of the panel's frame, and where the white reflection highlights are on the glass pattern. You can also make out a convex profile on the right side of the panel along the frame's inside edge in the above photo. 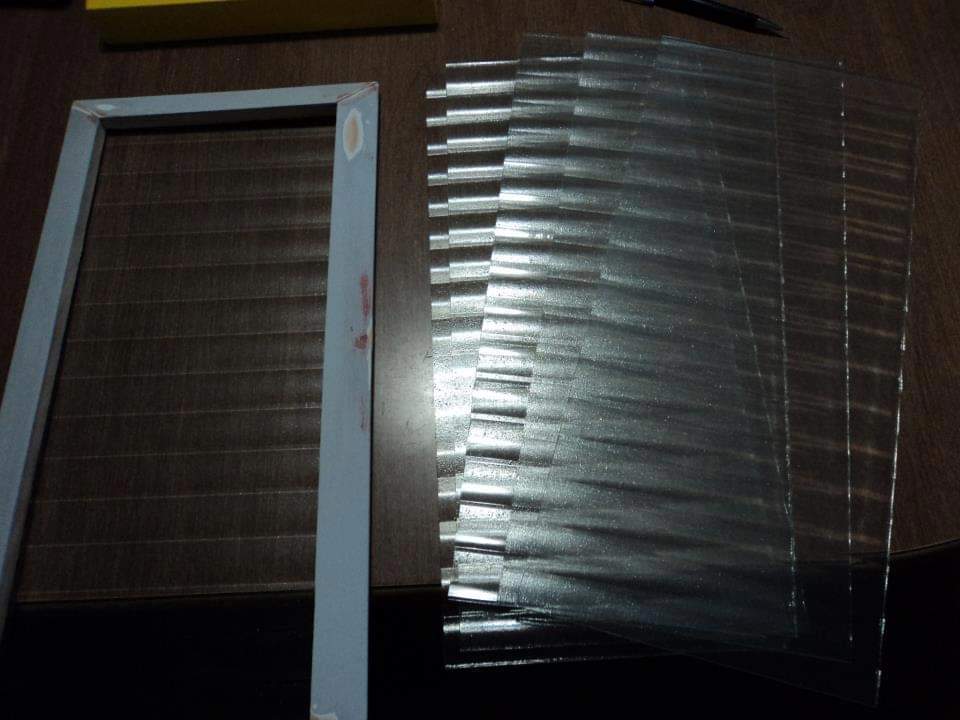 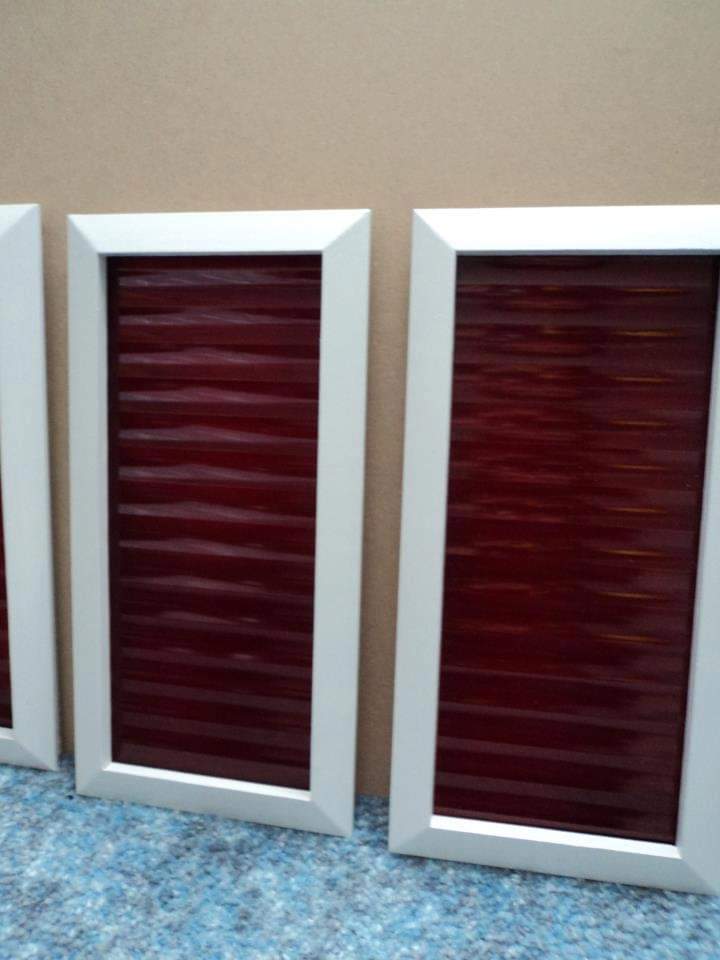 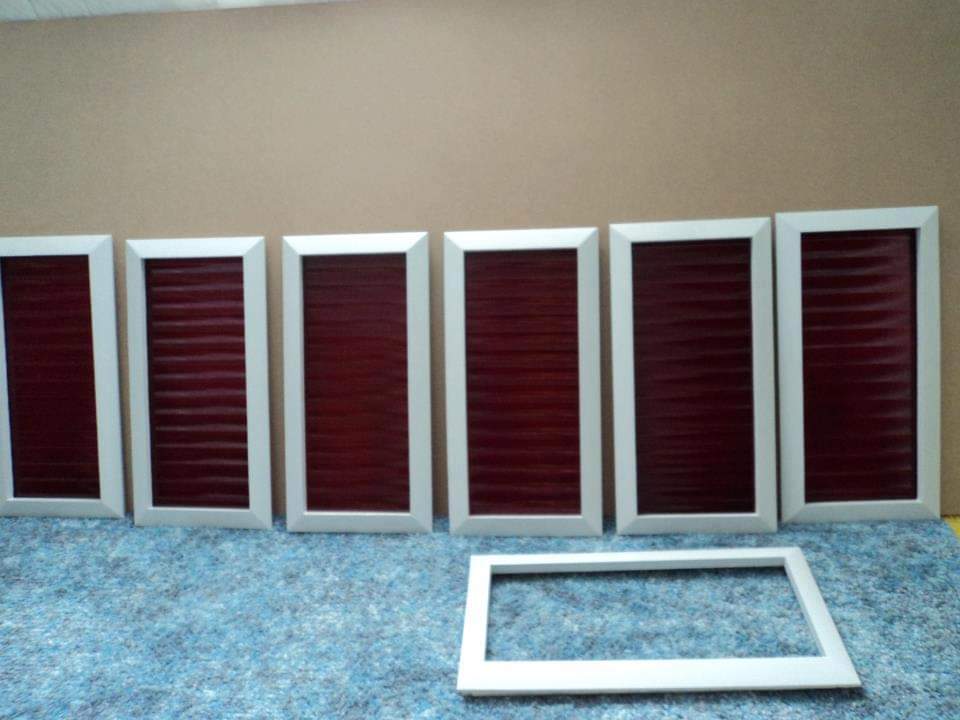 In those photos, there are roughly 14 "bars" on the panels, and the panel's height is taller than two widths, suggesting a 6" x 14" size. I don't know, that's why I'm asking for information - and I personally don't know how screen-accurate the TOS Set Tour panels were made (but probably pretty accurate).

So, without compelling evidence otherwise, I believe the glass to be convex reed rather than concave fluted. (Feel free to argue against that, but have supporting evidence.) Honestly, I'm more interested in knowing the accurate reed pattern size (it looks to be 1"), the frame interior dimensions, the frame width and thickness, and if a specific material is/was used for the frame then what is it.

I'm not certain at all, I told you I paraphrased what was in a thread found elsewhere. There weren't any conclusions drawn in that thread either. Looks like you have your research pretty well in hand. Good luck!

I'm not able to access the Fleet Workshop (private forum) for including any info from there in my research.

Measuring from scaled photos, it appears the light panel is 6" x 14" with a ~1.2" bezel frame. I might have found a glass that will work but it's too early to know.

Screenshots from "The Man Trap", "Charlie X", and "The Naked Time" clearly show 12 reeds/flutes on the glass panel resulting in a 6" x 12" size (assuming 1" reeded/fluted glass, the largest spacing available), and these are regular wall placements as opposed to above doorways where some people claim the panels were smaller: 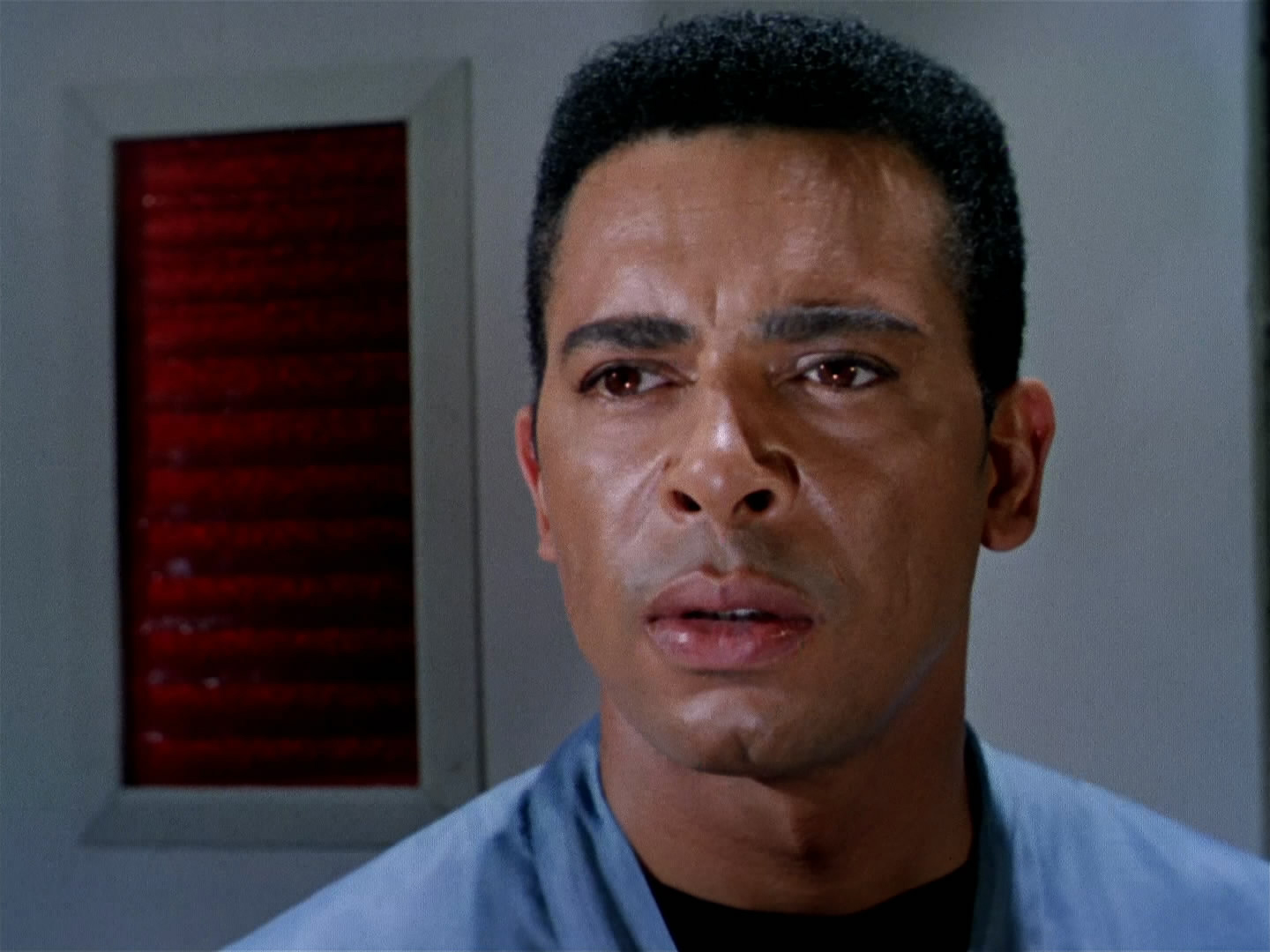 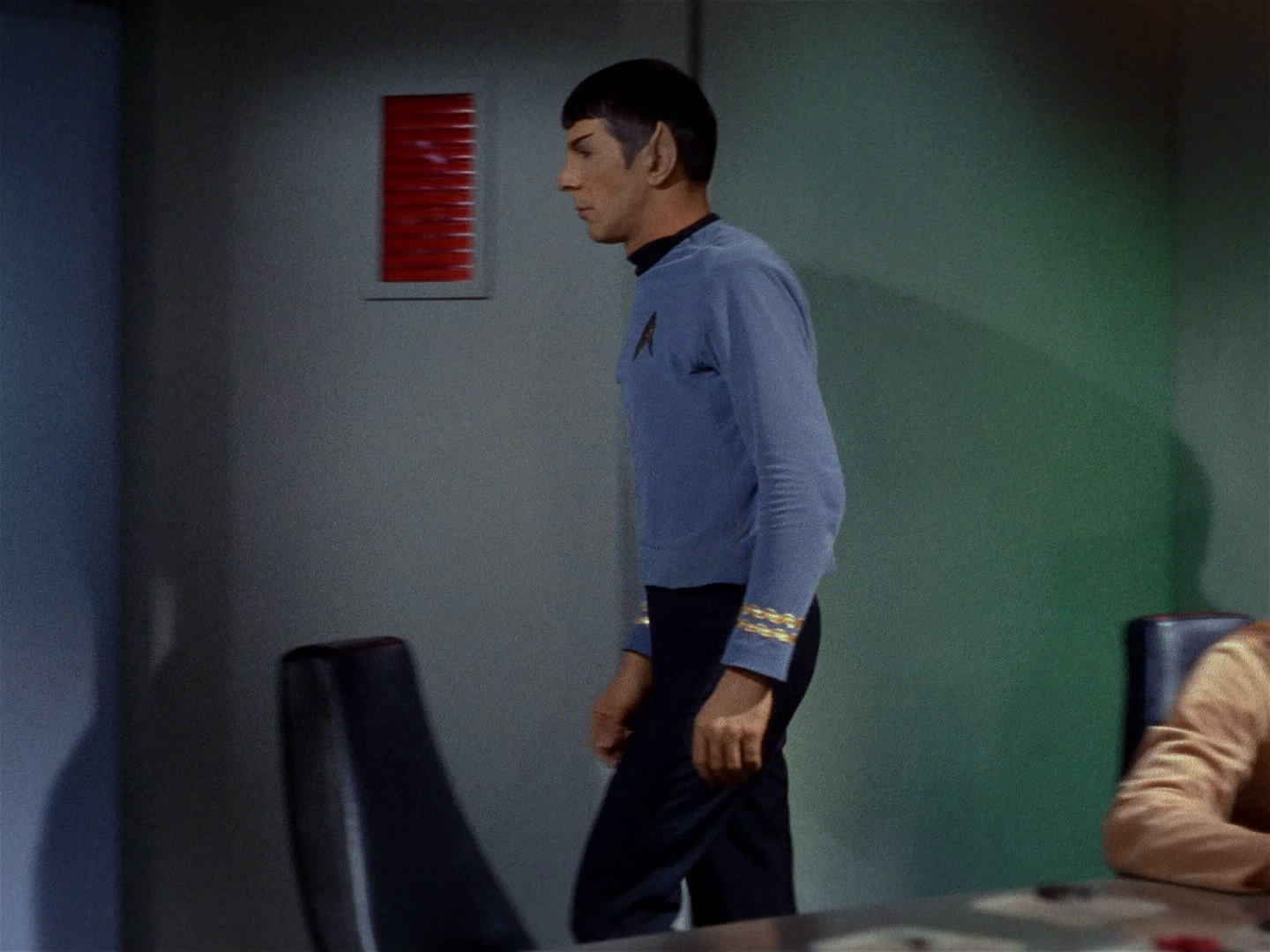 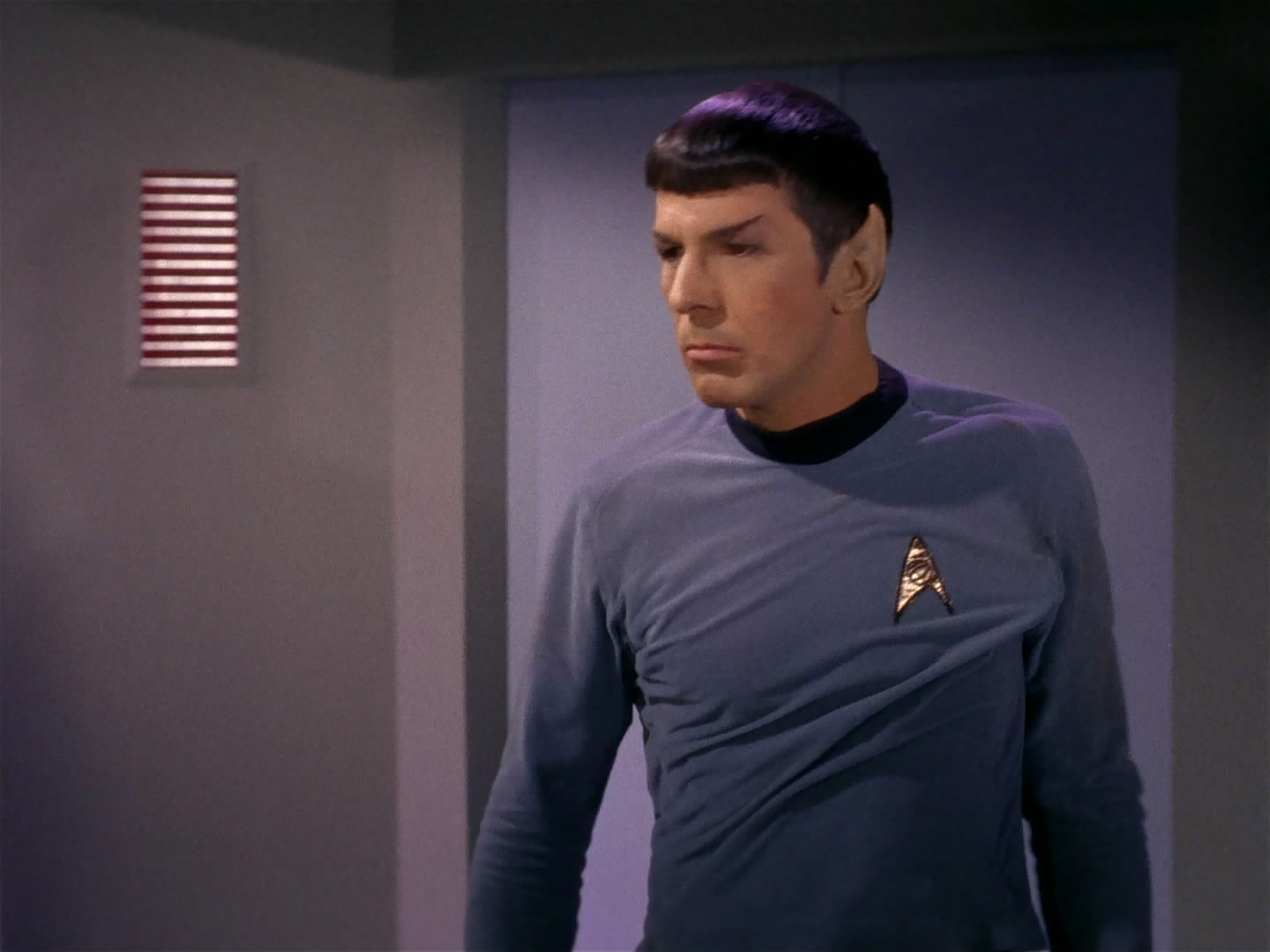 Does anybody have a brand/color suggestion for the red gel filter to be placed behind the glass? Every red I've bought had to be returned for being too dark or not quite the right color. Do you think a sample book could be helpful? I'm seeing 3 main brands, Lee, Rosco, and Gamcolor - but buying a $25 sample book from each would be unnecessarily expensive so I'd like to narrow it down. Thanks!

I don't have a link for you, but I seem to recall someone doing some 3D renders to test out different reflection and refraction qualities to figure this out. It might have been at Trekbbs.com

Could be Donny Versiga's amazing work. I've got 3 more different filters ordered, so hopefully one of them works out - otherwise, more Amazon returns. Thank goodness for Amazon's return policy! Some items you simply cannot gauge from online product photos - they need to be seen in-person and this cowboy town just doesn't stock many of the products I need (at least that I'm aware of). It's slowing me down waiting on all the mail-order supplies, especially at this time of year (holiday mail).