Was this one posted?

Packing a hefty punch inside a compact body, this 1:1 scale replica of the iconic Type-1 Cricket Phaser prop from Star Trek: The Next Generation features a variety of electronic light and sound effects neatly encased in a heavy diecast metal frame.
www.factoryent.com
A

Looks nice. I'm really going to need to think about getting one.
I wonder if this means that they now have the license for TNG props.

Gosh, I certainly hope they have a TNG prop license - I've been wanting a Mark VI or VII replica for ages. I hope this is them testing the water on TNG props.

As for this cricket phaser prop, they actually have two versions: the version shown above, as well as a limited-edition "season 1" version - but that's just a later-season cricket painted to look like a season 1 phaser. The early-season crickets have painted-on buttons, while the later-season ones have physical buttons, which is what Factory Entertainment is selling. I guess if you want authentic, get the cheaper one.

Looks good, but I'll hold out for a Boomerang phaser. They have the TNG Medical set for pre-order as well.: Star Trek - The Next Generation Medical Set Limited Edition Prop Replica

RPF PREMIUM MEMBER
I'm a lot more tempted by the season 1, even at the higher price. The latter seasons repaint looks to much like a cheap toy... Just my opinion.

The question for me will be: does it have a replaceable battery? I'm over owning props where I have to worry about them dying from sitting on a shelf too long.

It appears to have a replaceable battery; check out this image at Trekcore. A spring for a battery, presumably.

RPF PREMIUM MEMBER
FE is planning a number of phasers. I wish they didn't change their display cases from the acrylic that the MIB items had though these are still get tempting.

FastballSpecial said:
FE is planning a number of phasers. I wish they didn't change their display cases from the acrylic that the MIB items had though these are still get tempting.
Click to expand...

RPF PREMIUM MEMBER
That's it, I'm committed now, just placed an order. Just when I thought I was gonna pay off my VISA, hehe, silly me, I knew I couldn't resist. The 'heavy cast metal frame' sealed the deal for me. I wonder if they will be producing their own soundboard or outsourcing.

Caveneau said:
That's it, I'm committed now, just placed an order. Just when I thought I was gonna pay off my VISA, hehe, silly me, I knew I couldn't resist. The 'heavy cast metal frame' sealed the deal for me. I wonder if they will be producing their own soundboard or outsourcing.
Click to expand...

RPF PREMIUM MEMBER
I preordered one of the standard units.

Between the Ressikan flute, the TNG med kit, and now the cricket phaser, it seems FE is diving deeper into the TNG-era prop pool. Here’s hoping for a Mark VII tricorder!

masterjedi322 said:
I preordered one of the standard units.

Between the Ressikan flute, the TNG med kit, and now the cricket phaser, it seems FE is diving deeper into the TNG-era prop pool. Here’s hoping for a Mark VII tricorder!

At least somebody is diving deeper and delivering..... what a concept right ? GC
K

If I read the handwriting on the wall, I believe up next will be a medical VII tricorder. And If that’s successful I imagine the vii won’t be far behind. Sadly I don’t see a way to do it today without surface mounted LEDs, which don’t quite give me the look I want, but it’s still the prop I want!

I also wish they would go back to the old MR style acrylic displays, but I imagine the new look is in part due to the f-Ed up world supply. Electronics items from Chiba makes sense, acrylic stands probably not. I see display stands on their James Bond line, but being that those don’t have electronics and I’d bet they come from India.

They did a nice job on the flute and I’m curious about the hypo with sfx. I’m excited that they are going the TNG direction, I think that’s what the fans want. I’m eager to support them because o want them to be successful just to see what comes next. geordis visor? The borg queens skull

I’m in for the cricket too, but I’m disappointed by the unsightly seam lines on the season 1 version. It was smart to utilize the tooling for two versions, but should have figured out how to do it to get the look more accurate on that one. Should be smooth, one smooth piece. They made it that way to make the painting easier for the S3. Also worried about light leak with the surface mounted LEDs in the power bar. It’s like I’m saying above on the tricorder, just not the same look as individual rectangular LEDs lighting up one at a time stacked up together. Also, I get that it’s a more “limited” version but the price disparity between the S1 and S2 is off putting to me too. It’s hard for an obsessive completist like myself, but I’m gunna hold off on the S1. I am excited foe the S3 though and think it will feel great in Metal.

here are my replica crickets for comparison on aesthetics. 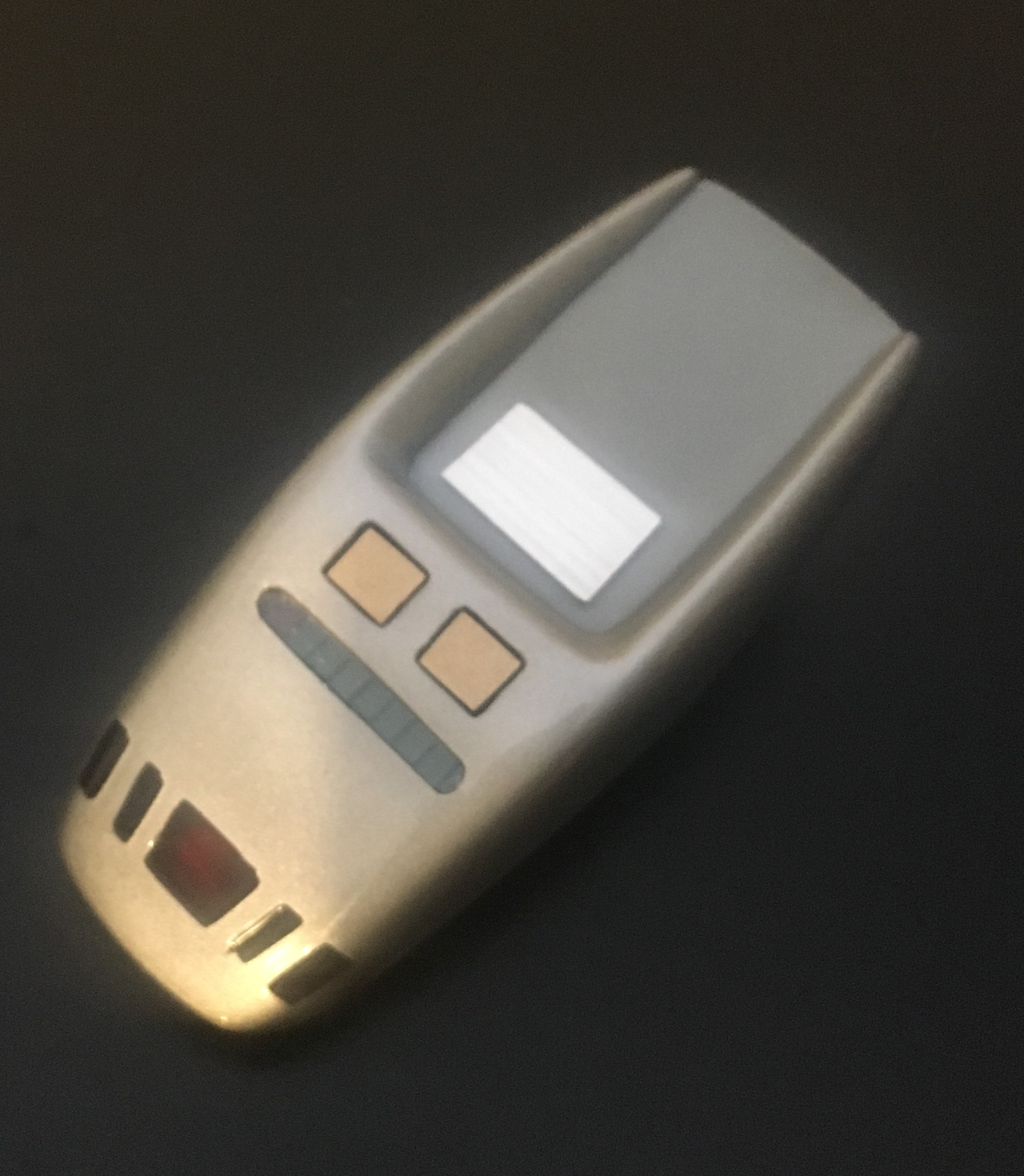 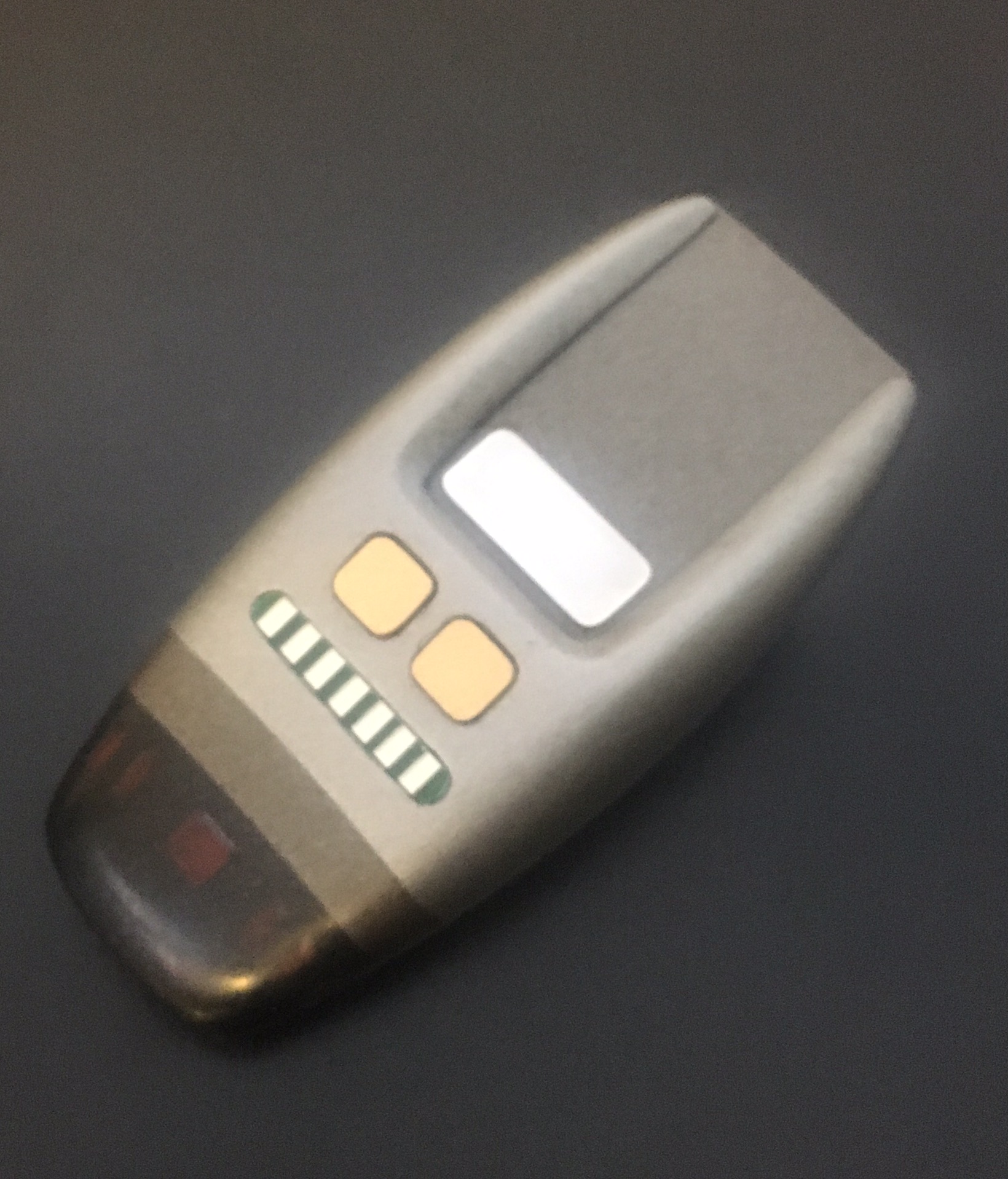 RPF PREMIUM MEMBER
To this day I regret selling my rodd.com tricorder with all the bells and whistles even though I got a super nice price for it. I went ahead and pre-ordered a cricket even though its not really my fav TNG prop. I just want to support this in the hopes they'll continue making more TNG props. I'd love a cobra head phaser and Romulan disruptor.

RPF PREMIUM MEMBER
Mm... Yeah, not a fan of this one. It's decent, but I've just spent a while prepping my Stapleton replica and am working on upgraded electronics possibilities including metal-film touch-sensitive "buttons" to mimic the early appearance and three-color LEDs for the setting bar (1-5 green, 6-8 all illuminated LEDs turn yellow, 9-10 all illuminated LEDs turn red -- plus an overload setting). With all of that scrutiny, comparing to and analyzing photos of the original early and late props, and planning sequence of construction to eliminate light leaks and seams... This one just looks like what Galoob should have released in 1987 after staring at the originals for so long...

RPF PREMIUM MEMBER
I'm trying not to let the seam lines bother me (plus too late I'm already committed). I'm trying to convince myself if a phaser needed repairing in the 24th century, it would have to be opened somehow to be repaired. For seamlessness, I'll have to rely on my other cricket replicas. I think I was ensnared by the heavy cast metal frame feature of these new ones.
I forgot about the currency conversion when I saw my VISA bill yesterday...D'oh well.