Maybe I didn't look hard enough, but I didn't see this link posted anywhere. Anyway, if you go to this site it has some cool pictures from the set of Star Trek TOS and a few have props and scale models in them. I really enjoyed looking at the pics and videos, some of which I had never seen before.

RPF PREMIUM MEMBER
Lots of pictures and Name Dropping does not an expert make.

That's a great source for pics of that, there is no doubt.

I dont know "Gerald" from Adam. I'm in no way challenging him or anyone else, but here is an example of what Im talking about.

You decide for your self.


From the web site you get this: 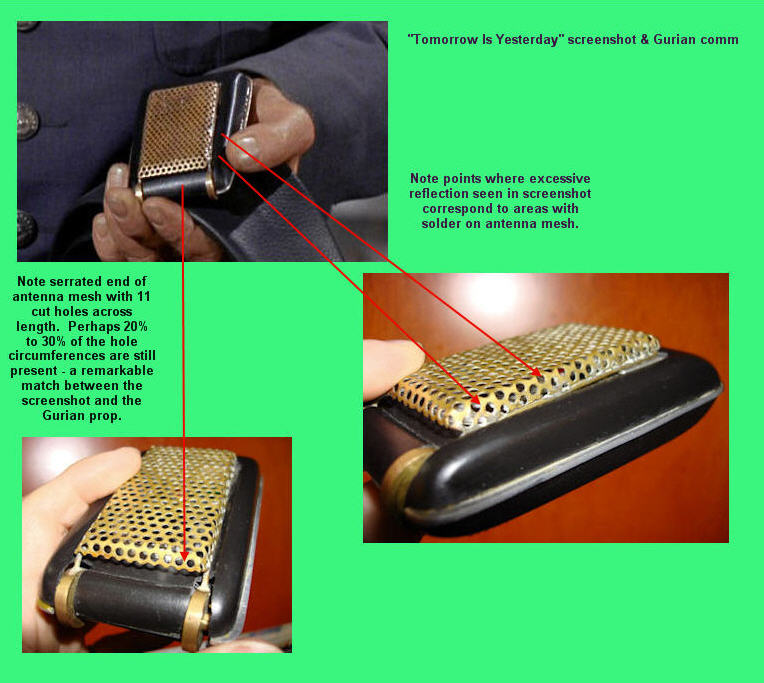 Now, I have no idea if this chap owns a real communicator, or not. He probably does,
I hope he does. I do.

HOWEVER, there is no way on God's Green Earth the two pictures above are of the same prop.

Sorry, you can see what ya want if you look hard enough, but those are two different props.

The point Im making to fellow TREK Prop folks, is never believe anything.
Unless you walked off the set with it, you will always be trusting someone else's word at best.
Who can you trust? Your own eyes and actions. That's pretty much it.

However, "Your eyes can deceive you, don't trust them" said the wise wizard.

"The Communicator has been copied 10 different ways to Sunday. There are so many really nice fakes out there, who know's what is real. Mark English made some great copies. "

Im paraphrasing above, but Greg Jein himself told me the above quote. Yeah I can name drop too.
It doesn't mean I have any more authority than,.....anyone reading this.

Does anyone really think it was only RECENTLY that someone figured out the master was the STERLING PENCIL BOX? How many of HAD the Sterling pencil box as a kid, and said "HEY! THis looks like the COMMUNICATOR!!" So, matching dimensions of the body, or comparing HIGH DEF pictures to FUZZY Screen captures saying THIS PROVES you have a real one, sorry, just doesnt work.

Regaring the site, and again, some of the other pics look more of a match to whatever is being compared. For example, the shot of the communicator rear with Velcro. However, even though it's in the same place, it doesn't prove for certain that it is the same prop. WHo knows? A true statement would be that anyone creating a fake, probably had the same reference.
You have proof it matches a picture. That's pretty much it.

I just find it amazing, in my years of prop collecting, I have found no less than 17 or 19 people swearing they have a REAL COmmunicator, when only 10 were made.

I don't want to rain on the guys parade but he is discussing how light is reflecting off of solder joints and matching half cut circles but did not notice the fact that the prop in the screen cap has 12 holes across when the one he is comparing it to only has 10... what??? lol:lol
C

BrundelFly - Could you post pics of your Com? I would love to see that.

RPF PREMIUM MEMBER
Which one?
My Crappy Marco Ent one that was the first replica I ever bought?
My Steve Horsch (May he RIP) one?
The four I made and had signed by "The Fab Four" (Nichols, Koenig,Takei, Doohan) in 1998? Came home from that con to receive horrible family news, threw the coms in a box. I dont think I have looked at them twice since.
I think I have about 1/2 dozen others including one with some pretty cool sounds/voices.

One of the funniest things that ever happened to me was a friend sent me pictures of "original" communicators. One of the photos was one I had made from scratch.
Keep in mind the this was long ago and there was not the plethora of kits and info that exists now. From the right angle, and with vaseline all over the lens, my abomination almost looked decent. Which goes to show ya, the camera is very forgiving, and even something way off can look closer than is warranted.

I think CMA was asking for pics of your real communicator. I would love to see it too!

Cool links. Thanks for posting!

22 Stars said:
I think CMA was asking for pics of your real communicator. I would love to see it too!
Click to expand...


Where did I ever say I had a real one? If I even did, Im not sure I would even say so, because people like me, wouldnt believe it was real anyway.

So whats the point?

BrundelFly said:
Where did I ever say I had a real one? If I even did, Im not sure I would even say so, because people like me, wouldnt believe it was real anyway.

So whats the point?


BrundelFly said:
Now, I have no idea if this chap owns a real communicator, or not. He probably does,
I hope he does. I do.
Click to expand...


22 Stars said:
I think CMA was asking for pics of your real communicator. I would love to see it too!
Click to expand...

"Now, I have no idea if this chap owns a real communicator, or not. He probably does,
I hope he does. I do."

Poor grammer. Period should have been a Comma.

"I hope he DOES, I do."
"I do" should have been read as "I DO HOPE", reinforcing the previous statment.
"I hope he DOES have a REAL Communicator, I do (hope so for his sake)"
Because if not, he probably got $$$ BURNED.


See what I mean? Thanks for bringing that to my attention and letting me clarify.

Im not the "NANER NANER I GOT ONE YOU DONT! TYPE" Im more of the "DOUBTING THOMAS TYPE" .

RPF PREMIUM MEMBER
Frank, I have 11 REAL Comms, from the 60s. They have digital watches inside to keep the moires spinning, or something. I forget exactly... the guy in the back alley that sold them to me was talking really fast, and it was dark. They even have "Made in China" stamped on the back, and I think Wah Chang was Chinese or somethin?

Anywhoo, I'll send you a couple, since I have so many.

He did get burned on that (I remember there was a big ruckus about the person that sold it too him knowing that it was fake and still selling it).

The person who owned it before him bought it thinking it was real. Once he found out it was fake he put it on eBay. A bunch of people eLynched him and he pulled the auction. A bit later Gerrold posted pic's of his new "Screen Used" Communicator and it was the fake one that was being passed off as real. Unfortunately he was warned it was fake but did not heed the warning.

Now days it would be very difficult for him to recover his money on it. There is way too much reference available to pass a forgery that is that far off :rolleyes. It really is not very close to any screen caps that you compare it against (much less Hi-Res pictures of the real ones).

They even have "Made in China" stamped on the back, and I think Wah Chang was Chinese or somethin?
Click to expand...

Isn't it taken as read that if you use the words Expert, Official, or Authority, in your self-proclaimed title, you usually aren't. That's how I usually see it.

...and they tend to prove that out over time.

I remember coming across one of those pencil boxes in the mid-70's in school. I remember being fascinated by it and thinking there was something oddly familiar about it. I just couldn't put my finger on it.

Wow. Little did I know it was the basis of the ST TOS communicator. Wah Chang was a genious.

RPF PREMIUM MEMBER
He sure was and an Artist as well

Jsimon999 said:
Wah Chang was a genious.
Click to expand...