So today Screen Crush got a hold of exclusive video of filming for STB along with lots of good, hi-res photos. Subsequently Paramount struck down the copyright gavel and pulled it but I managed to save it all from a cache download.

Looks like an overhaul on many levels. I for one am in love with this new uniform that Kirk and Chekov are sporting. But it looks like even the the orignial ST and STID shirts got a revamp. Obviously a lot of this is custom work but have a feeling the boots are motorcycle off the shelf's much like the DKNYs.

RPF PREMIUM MEMBER
Yeah, Looks like they came out with a new away team Uni and minor tweaks on the rest

Interesting direction they are taking, is he Captain Kirk or Captain America! They should have been wearing the standard duty shirt under the jacket, it would have made the uniform look less like a Marvel suit and more like starfleet. The Phaser holster is looking a bit too Star Wars, although the original Star Trek concept was a western in space so I can let it slide.

BTW - When do we get a dedicated Star Trek Sub-forum under Popular Franchises ???!!!

Looks like they have dropped the chevron pattern and gone with solid color, also they changed to a more traditional shoulder cut. I always loved the original shirt cut and it was one of the only things in the reboot that I liked, another nail in the coffin, not that I was planning on seeing this one away, hated HATED "Into darkness". BTW I saw a set photo that looked like a crashed Enterprise,Star Trek III or Generations, ripoff.....again..do they have any new ideas?

I get they're taking a lot of cues from Guardians of the Galaxy to make it more "fun", but that doesn't mean they should abandon the TOS aesthetics.
Would have preferred something more like this:

That looks great. It does seem like everyone wears a dark grey/black undershirt, and their department colors are on their duty tunic or space suit or underwater suit etc. The exception would be their flight jackets in STID when they are on the shuttles. They had 'windows' to their duty tunics below.

Also note the darker panels on the sides of the torso. The black collar, more prominent than ever in "Into Darkness," has been reduced to just a black piping strip at the top of the collar.

Or maybe they're wearing the black undershirt with a slightly higher collar, under the color tunic. Scotty also seems to be sporting some kind of smart watch.

It has been pointed out that a makeup table shot of Quinto last month showed the new tunic and nobody noticed! vs Quinto in "Into Darkness" 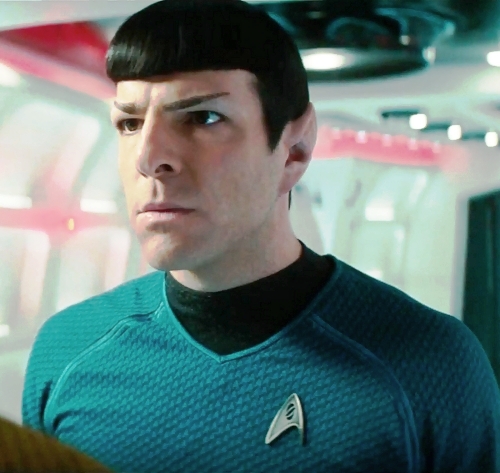 RPF PREMIUM MEMBER
I wonder if they are still using double sided tape to keep the insignias on? :lol I have to be honest the best thing about the new movies were the uniforms. I thought they did a great reimagining of the classic tunics. Now they are even ****ing those up.

They already ****ed them up a little in Into Darkness, making the raglan seams curve too much to the point of collapsing in on themselves. I wasn't a fan of the numerous new uniform variants in the last movie and it looks like the same deal this time around, except now we completely lose the original tunics. Let's hope the story is good.

Why would you entertain the thought that the film will be anything other than a complete debacle like the first two films. From the beginning J.J.Abrams concept for Star Trek was flawed, not being a fan(first Red Flag), not watching the previous films(second Red Flag), and finally clearly not understanding or respecting the basic philosophy of Star Trek's future universe. J.J.Abrams biggest mistake was his version of the Classic Star Trek characters which other than their names bare little resemblance to their originals. I have been reading the accounts of J.J.Abrams next project,Star Wars episode VII, which is what one would have hoped for the new Star Trek, he loves and adores The original films, more importantly he respects them, I will watch this movie because I too love Star Wars. But Star Trek will always be my first love, perhaps in a few years a new voice will raise and bring trek back the way it was meant to be.
Last edited: Aug 23, 2015

Well JJ Abrams isn't so much involved in this one. It's a bit of a departure in terms of crew, even though the cast is the same and it's a sequel, not a reboot. It has the chance to turn around and be a good Trek movie. But the costumes aren't looking great.

So, I'm starting to like the new uniform (still meh on the field jacket getup though). I'm seeing it somewhat like the season 3 TNG uniform. They want it to look less like a shirt and more like a uniform so that modern audiences better understand. I get it, just which the color was totally black, not just the trim.

RPF PREMIUM MEMBER
I'm glad they are changing up the standard uniform. Give these movies their own look and identity rather than a slightly weird version of the 60's show.

Has any company announced that they are releasing a replica of the modified new phaser with the horizontal slit barrel? Quantum Mechanix did the last 2 versions, but no word from them yet despite the upcoming release date in July.

The new Outdoor uniform looks like one from STAR TREK ONLINE, maybe they have a deal with them?

the new uniforms. not quite sure about them but uniforms seem to change alot in star trek anyway.

ps, am i the only one that think Chris Pine is quite well suited for the role as Kirk?