I had a friend mention that I should post this on here...I hadn't thought about it sooo...This is my Star Trek (2009) Uhura Duty Uniform / Communications Officer. I made this from late 2009 through a good part of 2010. It's a really comfortable costume and I've worn it as Uhura and just as a communications officer...
Retro look... 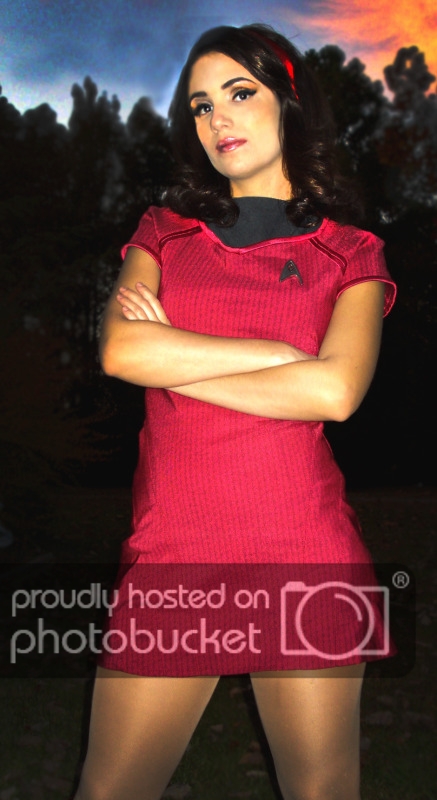 I started with researching as soon as the Blu-Ray DVD was available. I got a hold of some pictures of the hero costume on exhibit and bought the Uhura Barbie as an additional resource. I patterned the dress and mocked it up in muslin, though in retrospect I wish I had went ahead and mocked it up in spandex. The dress is fairly complicated for such a simple silhouette. It features a raglan sleeve with shoulder darts, a faux empire waistline, Hong Kong finished seams and three curved style lines on the skirt. 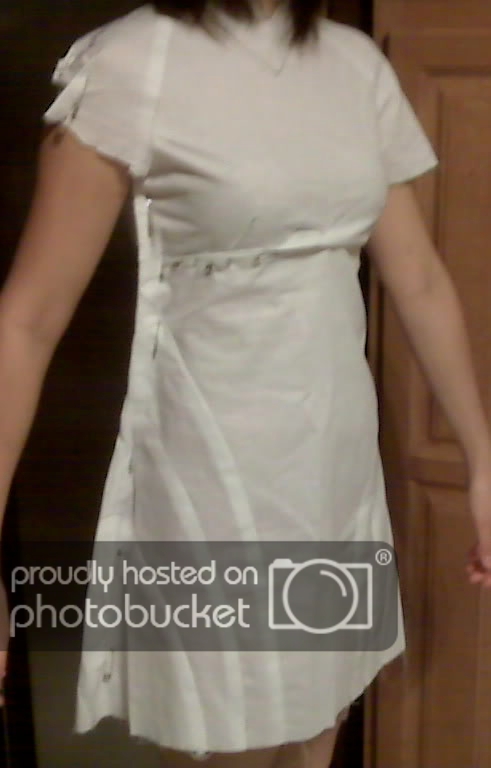 I dyed jumbo spandex to match the Rittenhouse card that a fellow costumer was kind enough to let me borrow. To dye it, I used acid dye in a dye vat to get that vibrant red color so even. 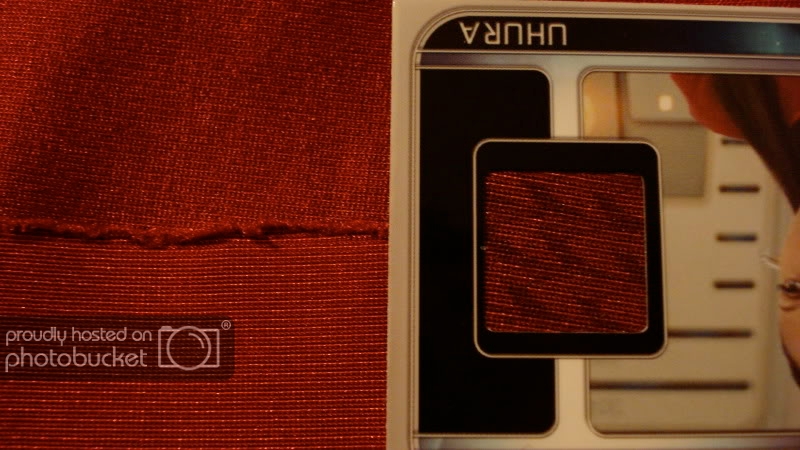 I bought the cotton spandex in heather grey for the under shirt (which Joe later told me is a leotard! Thanks again, Joe!) and dipped it in black to get the charcoal grey needed. 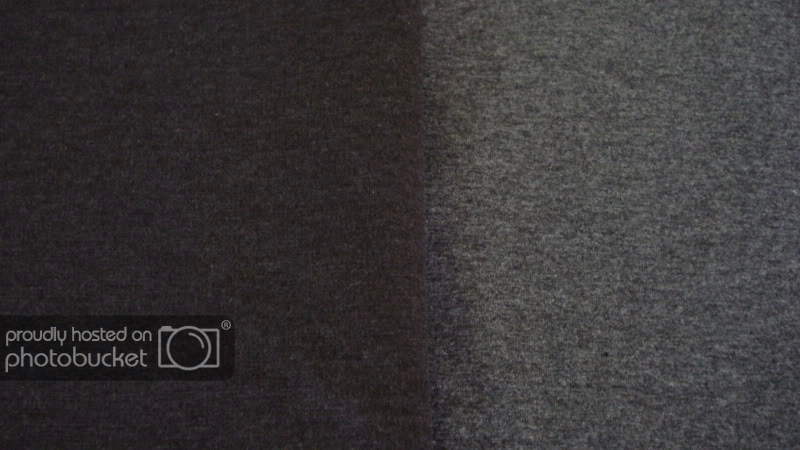 The printing was the big challenge for me because I had never screen printed before. I used the transparency/emulsion method to burn my screen and thickened the dye with thickener and urea. Unfortunately the process was very tedious and problematic, so I ended up switching to a second option. I had originally thought about dye sublimation, which would be printing my un-dyed fabric on a wide format printer developed for printing fabric. However, the jumbo spandex fabric is matte on one side (the outside, printed side) and shiny on the other side (the inside). When it’s dyed both sides are the same color and the shiny side is used in the Hong Kong finish, which shows on the outside. Which makes the Dye Sub technique not so great because it only prints on one side, keeping the shiny side white. It would work if you printed one side and dyed more fabric the same as the printed image to use as seam binding. J But while working this all out, I ran across a family friend who has a business as a sign printer. They use a wide format UV light printer to print large signs and advertising pieces. The printer lays down ink and then cures it with a high-powered UV light…and we had the crazy idea to throw fabric up there and give it a shot. After some troubleshooting, it worked! I do want to go back to the screening method on the rest of the fabric after I learn more about screen printing with dye, but at the time I was ecstatic that the UV printer method worked.

Not the best picture quality because it's being taken with a cellphone, but here is the fabric on the UV printer: 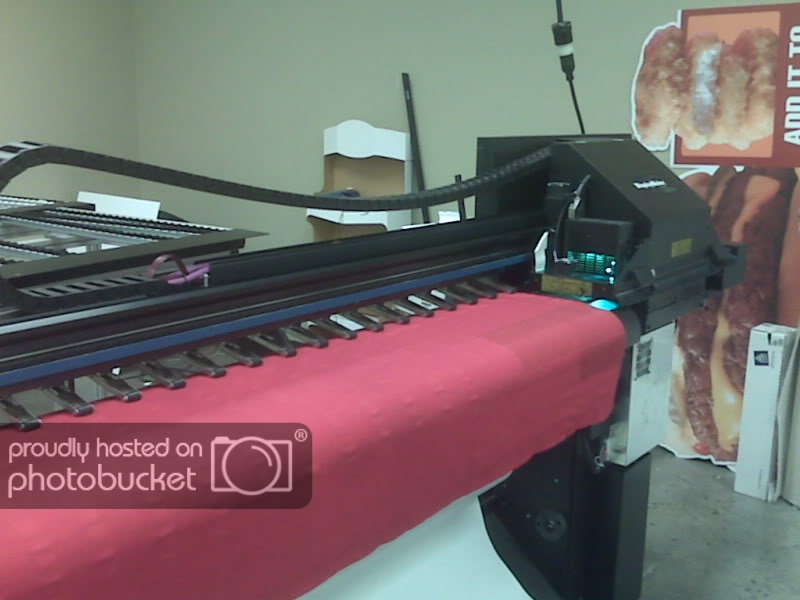 You cannot look at the printer head while it's printing because of the high powered UV rays, so it was a little nerve racking! But thankfully it all worked out... 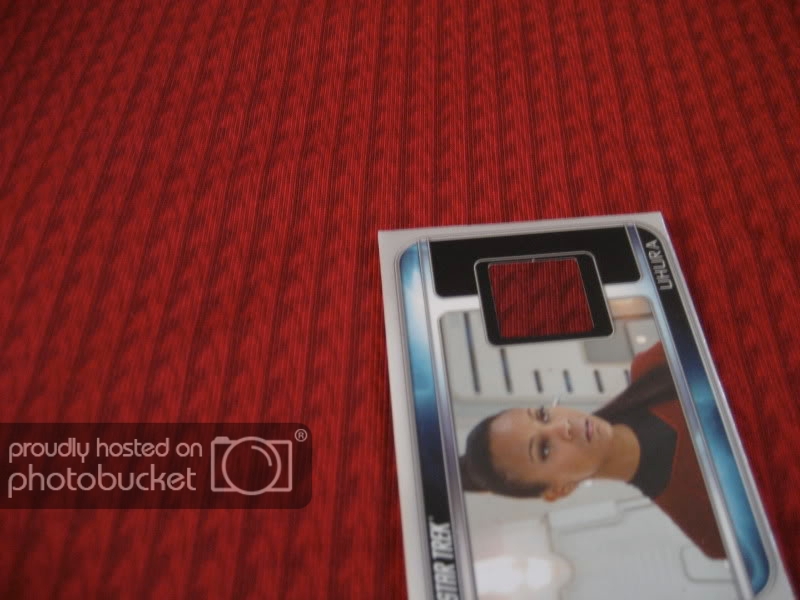 The design is not quite as crisp as I would like...but it looks pretty darn good for using a completely different method. I'm hoping to perfect the screening method one day and see about getting it closer to the Rittenhouse card. And for the rest of the costume...


I got the DKNY Dia boots, but I'm constantly on the lookout for the DKNY Hyper 2 boots...I'm afraid the movie might have bought them all! 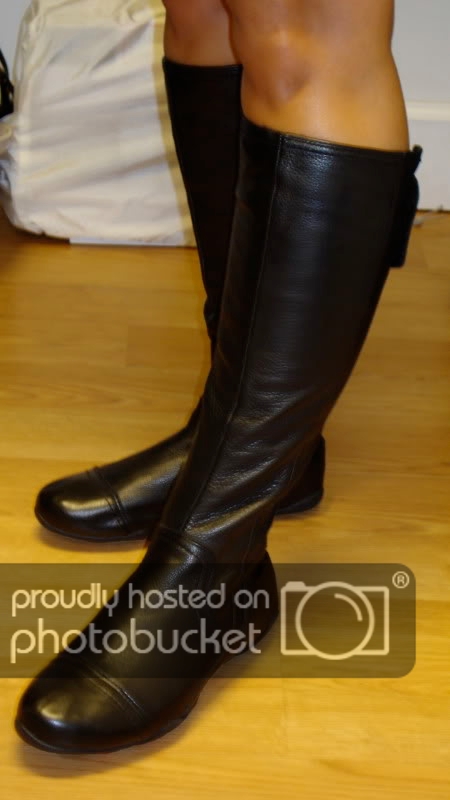 And the Alexis Bittar pod earrings… 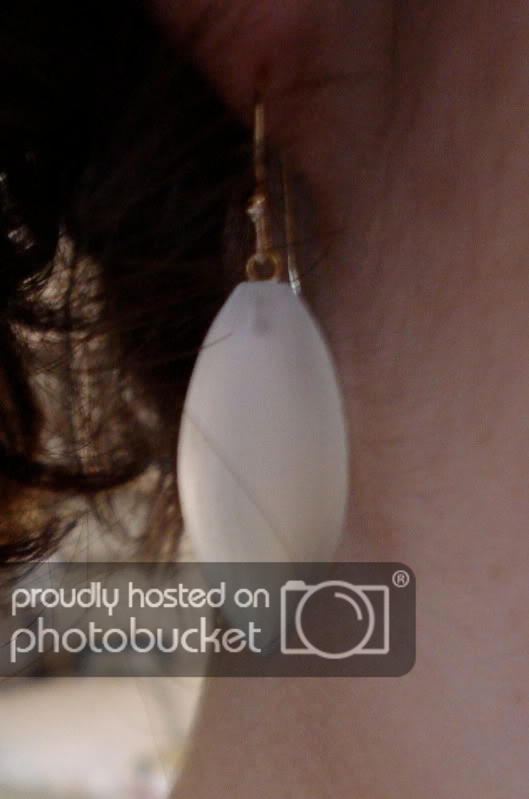 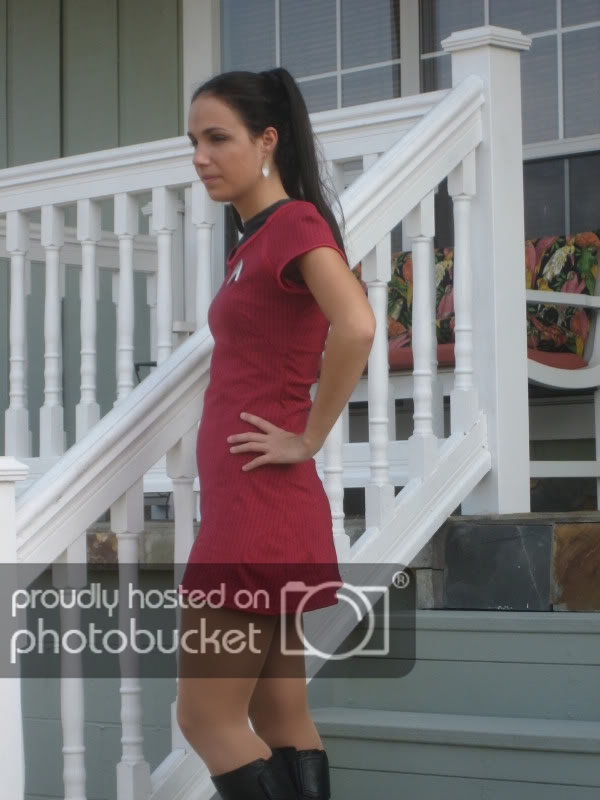 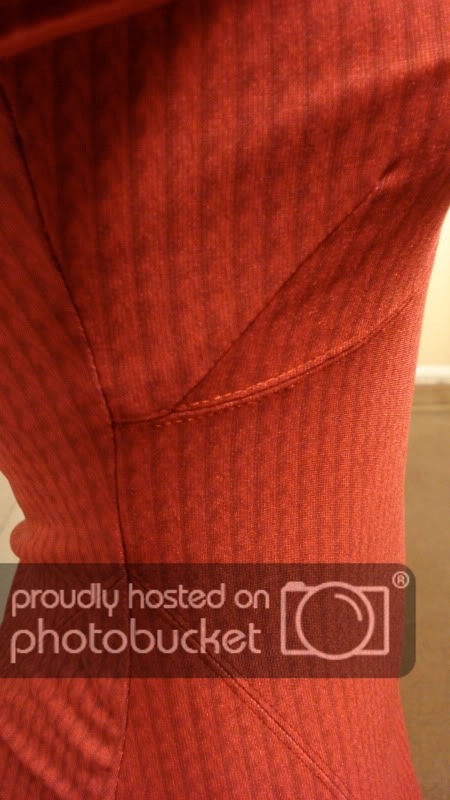 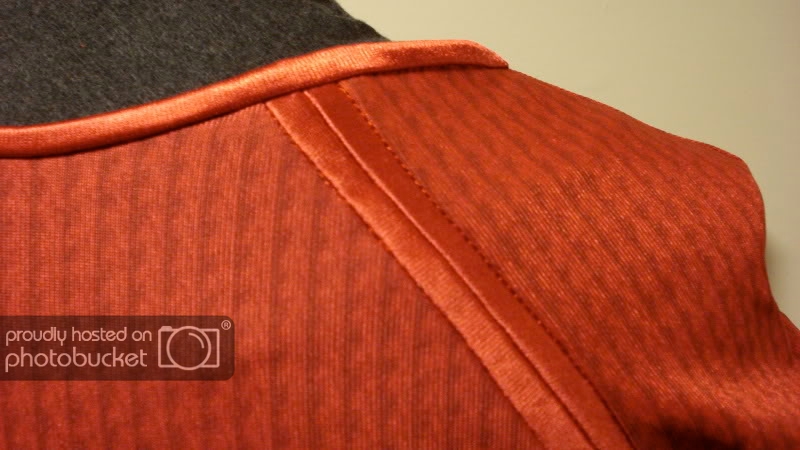 For more in depth process, here is my build thread in my pre-RPF days: http://img.photobucket.com/albums/v20/LadyVader/DSC02033.jpghttp://starfleet1701st.yuku.com/topic/1580/Uhura-Female-Short-Sleeve-Pattern#.TvAWsUyZP60

An instrumental resource while building: http://magpies-trek.livejournal.com/
Last edited by a moderator: Nov 9, 2018

Yowza! Great job on this Kristina. I know first hand how difficult this dress in and you smashed it AND look smashing in it. Congrats!!
F

Agreed this is awesome. :thumbsup You did a fantastic job on the whole costume, and you wear it well.
H

I find the printing technique interesting. I was in a similar situation a while ago, with a need to put some sort of texture on some stretch fabric, and ended up doing a rather time-consuming heat embodying technique that was only partially successful. I'd love to hear more about how you did it, so I can perhaps try to persuade someone here in the UK to do something similar for me.

Also, and I hope you'll forgive such a basic question since this is about as far from my area as possible, I was always told you couldn't dye synthetic fibres. The received wisdom I'd always heard was that you could only dye cotton, and even that was unreliable. I may soon need to dye some fairly standard shirts down to a mid grey, the risk being that even if I can get cotton shirts it's entirely likely they'll be held together with nylon thread. It's all too easy to end up with a grey shirt with white stitching detail in this situation and I'm anxious to avoid that if I can.

Still, I really started typing up this response in order to recognise just how tidily put together that costume is. That's some incredibly neat and detailed stuff with great attention to detail. We went and bought jackets off the shelf in the end for fear of not being able to get things that good.
W

Dead the h* on awesome work. That giant printer is amazing!

RPF PREMIUM MEMBER
Looks like you stepped right off the set:thumbsup

That is some serious dedication. Well done!

That is truly awesome!

It's funny how what looks so simple turns out to be very intricate.

Great work! This is top notch stuff.
(I have got to learn how to make that 'Hong Kong finish' seam...)

Thanks guys! And Joe, thank you. It means a lot!

@Hfuy: Printing the fabric with the UV printer was hard and tedious, but worth it. The main problem was that the print head wanted to pull the fabric up and it would get caught...a fabric jam if you will. :lol So we very carefully were holding both corners, while trying not to look at the print head to get it to print evenly. The printers are designed to print that thick plastic cardboard stuff, so the fabric was a bit to flimsy for the machine. He also had to do some setting changes to the machine because the ink naturally was being absorbed by the fabric more than if it were on plastic. On top of that, the UV light was passing over the designs too much and causing the design to cure AND fade. So we had to work those issues out. He also mentioned to me that each individual print cartridges (each color and black) are over $100 each. So each machine they had would need $500+ in ink and they had three or four. He didn't charge me anything and I was incredibly thankful. So, I'm not sure how cost effective this method is and I did alot of helping work. He only knew how to run the machine...and I understood the fabric and what the end result would be. Maybe if we found a costumer who did this for a living...

I think the saying that you cannot dye synthetics is one of the few facts of life that our Grandmother's got wrong. Heh. Yes, you can really dye anything that is a textile...and alot of other stuff too! Like beads, sewing notions...you name it. The trick is to know what kind of dye you need and sometimes what conditions or equipment. For example: The best dye for cotton, hemp, linen (plant based fibers) is fiber reactive dye. This is the kind you used to tie-dye with when you were a kid. For protein based fibers like silk, wool, and man made silk which we call nylon, you use acid dye. It sounds really scary, but all the 'acid' means is that you need to add acidity to the dye bath by adding vinegar. Acid dyes also like a really hot dye bath and you get a really even color for it. That's why a dye vat was important. But you can do the exact same thing in a top loading washing machine if your hot water heater is turned all the way up. So yes, you can dye all kinds of fabric and have it look like it came from the fabric store that way. Especially when you start with white fabric.

@Felgacarb: A lovely lady and wonderful costumer who goes by Laughing Magpie made a LiveJournal to record all of her findings when she made her husband's Trek 09 Blue Shirt. She and a few other figured out the hong kong finish used in the new Trek unis: magpies_trek: Special Shiny Double-Bound Shoulder Seams
S

Needless to say, ladies' footwear is not a specialism of mine, but I think I've seen the proper boots here (I'm near London). They might have been a chinese clone but they had the yellow circles on the sole, which is the only reason I noticed them.

Anyone else care to confirm?

I think so, just in yellow not red. I can wander by the same place tomorrow and see if they're still there.

Yea, in style. But they are not supportive for that sort of thing. They are just regular boots...but very comfortable.

we need to get you down here for a Ladies of Fleet shoot. You are highly respected in these parts, young lady.

Only one question, though.

What military (or to be more precise, paramilitary) organisation would actually dress their women like that?

On the other hand, I guess you can march in it.