I'm going to use this thread to document my progress while building the staff head from Raiders of the Lost Ark. I'm sure it's been done 100 times over, but I think it'll be a fun project. This will be my second attempt using super sculpey. Any tips along the way are welcome! Updates to come soon

Well so far I've learned one very important lesson: it is best to keep Sculpey in an airtight bag.
P

Hate it when that happens.

There's an old thread here on various approaches to smoothing out sculpey, getting rid of fingerprints etc that might be useful;

Gotta love the Staff of Ra! good luck with the build.
M

Thanks for the link! What's your opinion on the color of the jewel in the staff? Some pictures make it look red while others it's more of a yellowish orange. I assume it's due to the light, but if I can't find a jewel that reflects light that way should I just go with red?

RPF PREMIUM MEMBER
The headpiece that is generally said to be the "hero" as seen in the Imam scene has two topaz crystals. However, a headpiece with red crystals was on display during the exhibition tour, so it is possible it was used in the movie, but just never received a proper close up. It's up to you for which you prefer.

In addition, there's also the cast and crew gift headpieces that had red resin/plastic crystals as well. I've always wanted a headpiece with jewels like that too, for some reason.
M

That's iteresting how so many colors found their way in there. My aim will be the topaz look I think, but really it'll come down to what fits that I can get my hands on. My main concern for this build won't be 100% accuracy though I'll do my best. I'm just going to approach it like a learning experiance.
M

Made some progress today:
https://instagram.com/p/6nUKnfwLcv/

This will actually be my third sculpey attempt since I got distracted and started playing around the other day and ended up working on the Corpse Bride. I'll post some pictures of her to Instagram later as well.
As you can see I got over excited and forgot to leave a hole for the jewel so I'm thinking Of leaving an indent on either side to add it.

RPF PREMIUM MEMBER
Also, beware, there are at least two different sculpts of the medallion. The bird feathers differ noticeably.

Yes! I think I know what your talking about. On the birds body one version is like indents for the feathers and on the other it's more of a layered feather effect. 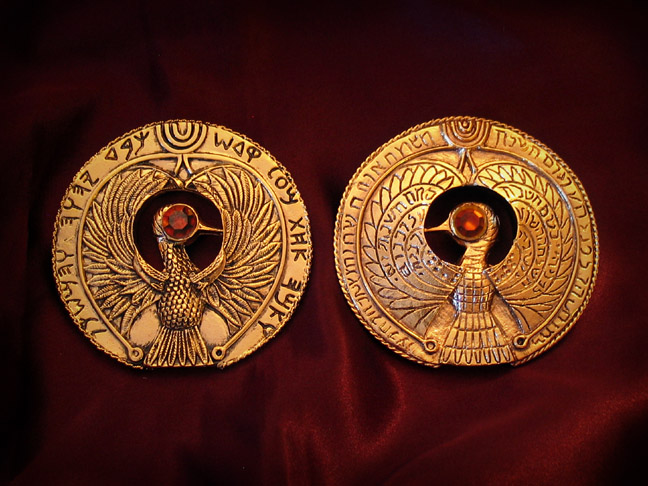 Oh wow, those are awesome! I'm aiming for more of the one on the left just because it's the one I automatically think of when I think of that particular prop, but if it ends up being a bit beyond my abilities at the moment I might go for the more etched look on the right.

At The Movies Productions (Back to the Future, Wall-e, Starwars, Beauty and the Beast, Greatest Showman, Wizard of OZ...)