Hello everyone, I am new to this so I hope you guys may find this thread or post interesting, maybe even helpful, or inspire you to make your own suit. I was hesitant to star one of these because I wasn’t sure if my work but now on starting on my second attempt I figured I could take the time to this time show the step my step on how I made my suit. Bellow is the finished first attempt and after further research I see that I can improve, hence the start of a v2. 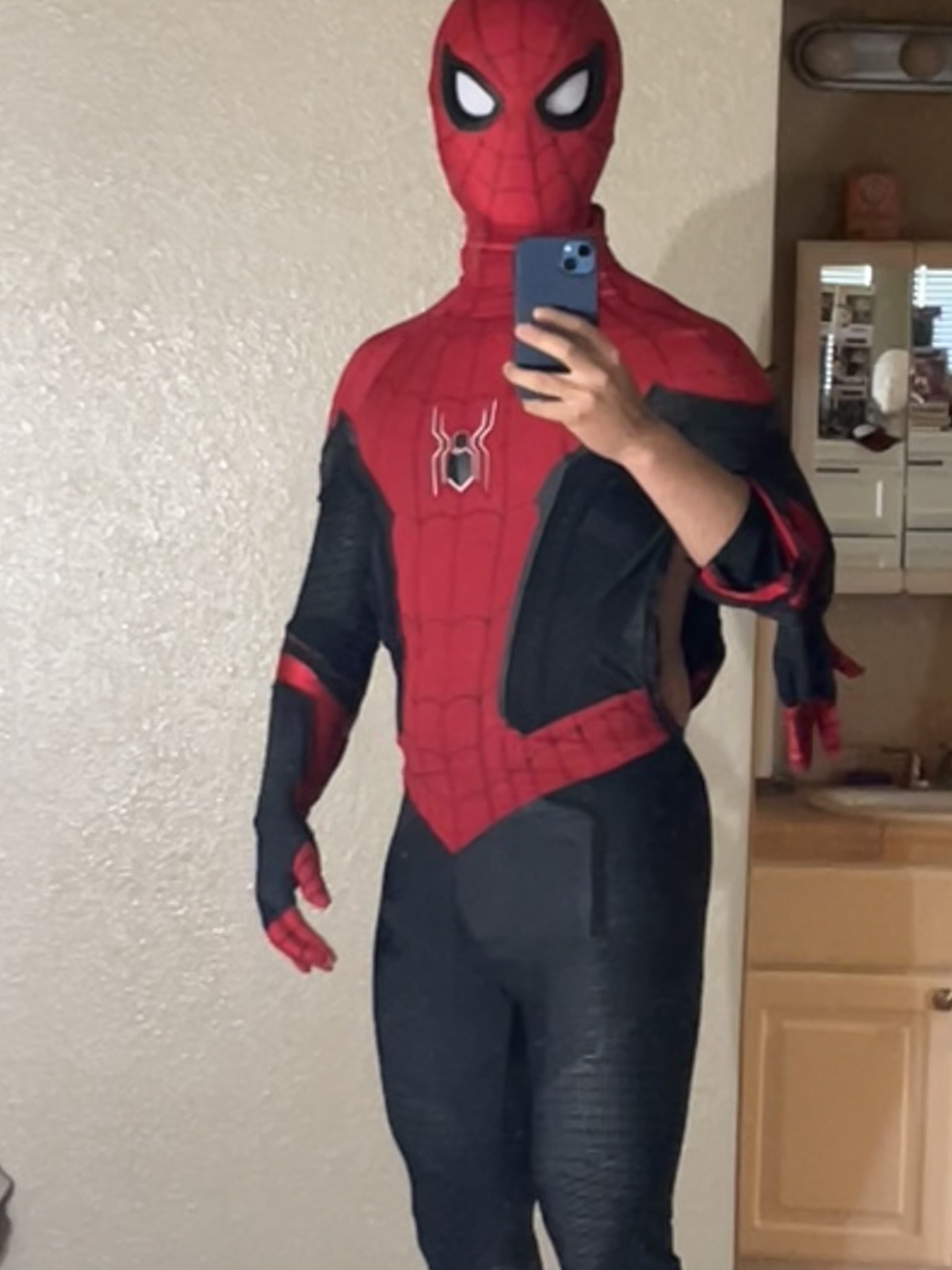 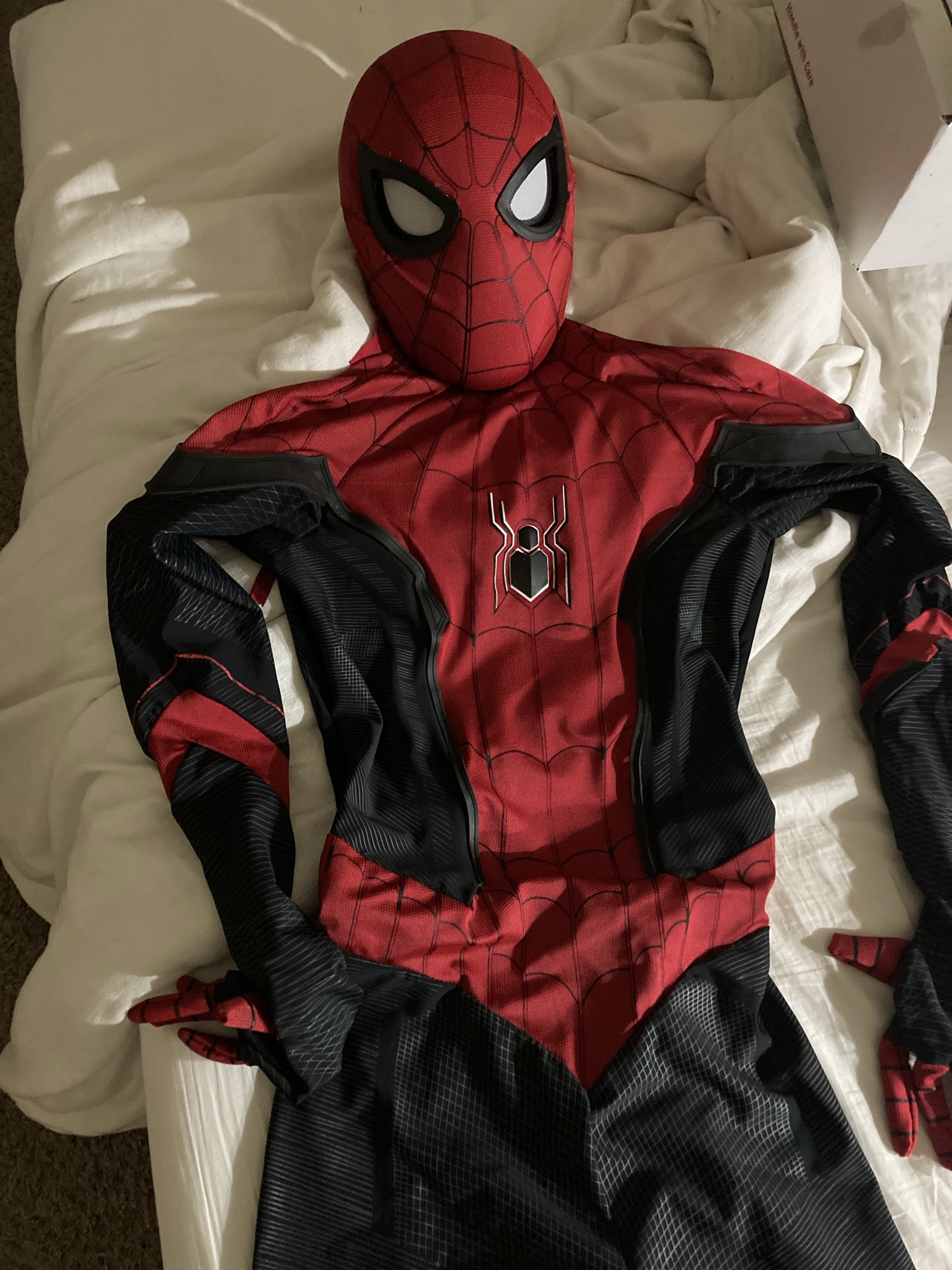 I will be adding to this tread going into detail step by step on How I make the v2 and on the suit details that make it screen accurate.

*Update*
Hello everyone so I’ve been making some progress on my v2 of this suit and so far I’ve been modifying scratch threads pattern to get a more movie accurate pattern. It’s mainly the lines on the black part of the suit, the webs and the texture of the suit. 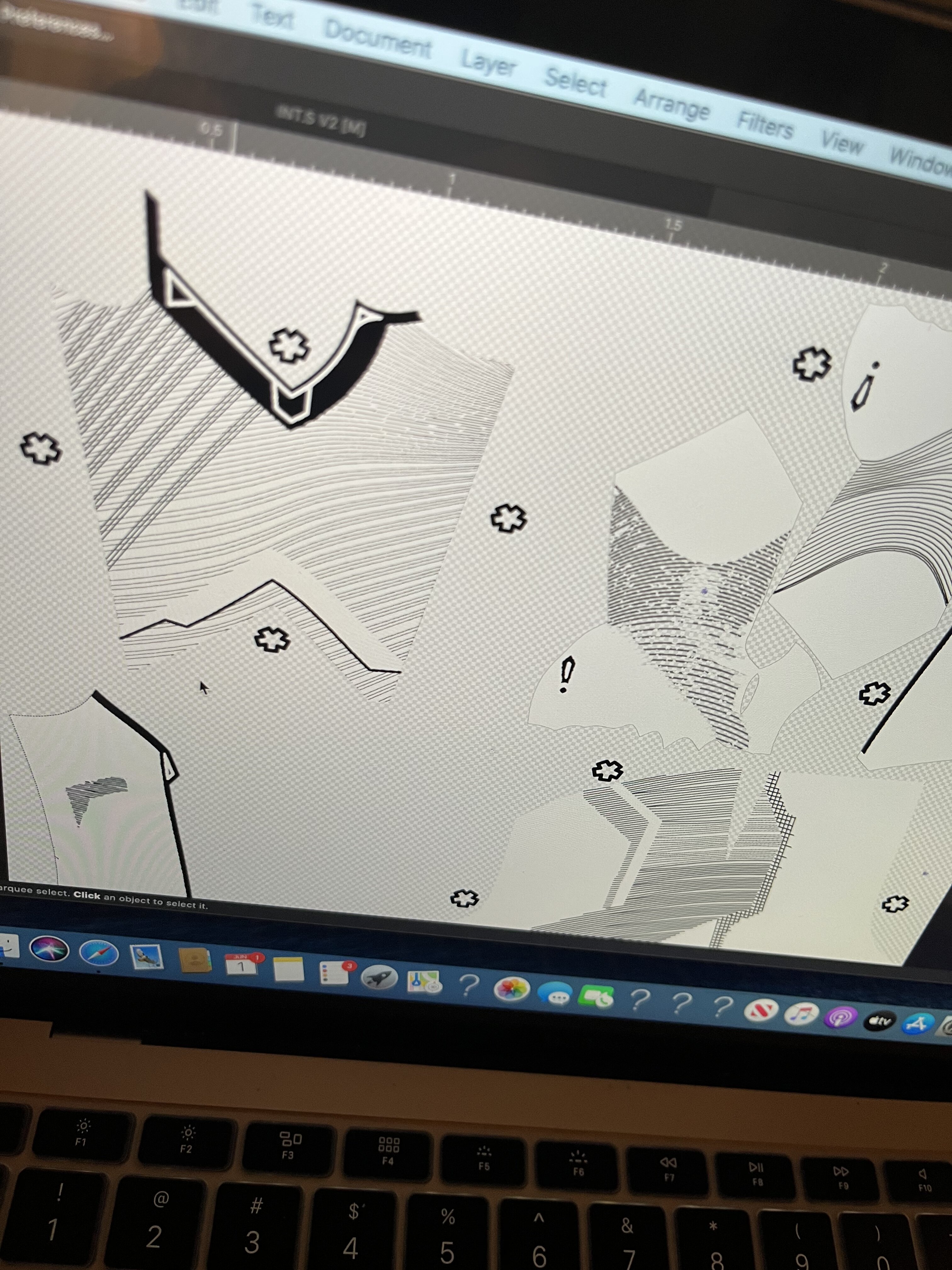 since I am screen printing it, I have to make the pattern as a vector with alignment guides (the flower shapes along the patter) since it has a raised texture, I’ll go I to more destacó in a sec, After all of that was done I had to print it on transparency sheets, and since I don’t want to spend more money than I already have I just bought some transparency sheets from Amazon and printed out the pattern and taped it together ,because getting them done at a shop can be really expensive. Now because the suit has some raised texture over the lines like in the image bellow, this one is from Aaron Alexander’s Instagram page showing a set piece from the suit showing it has a raise texture. 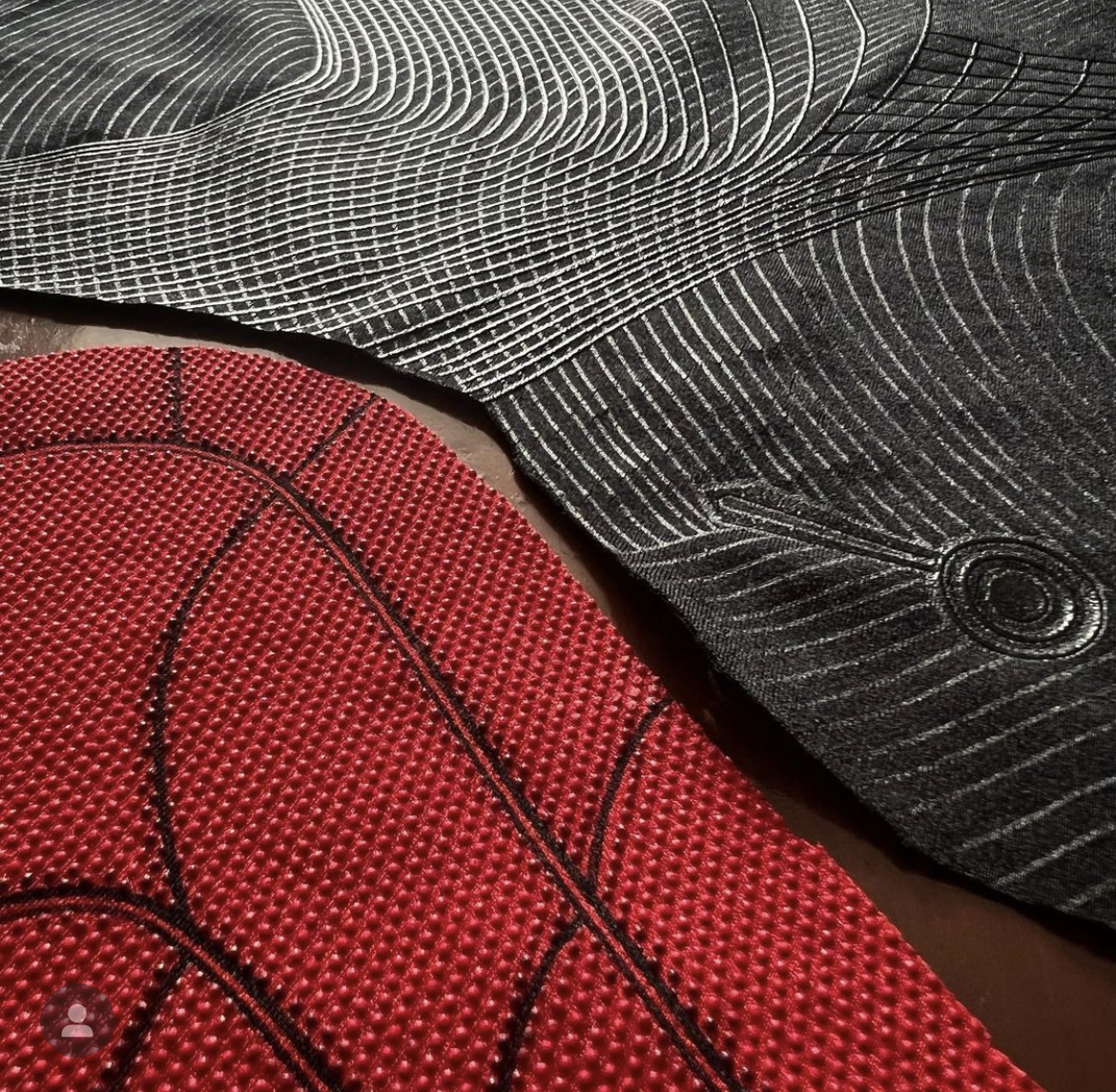 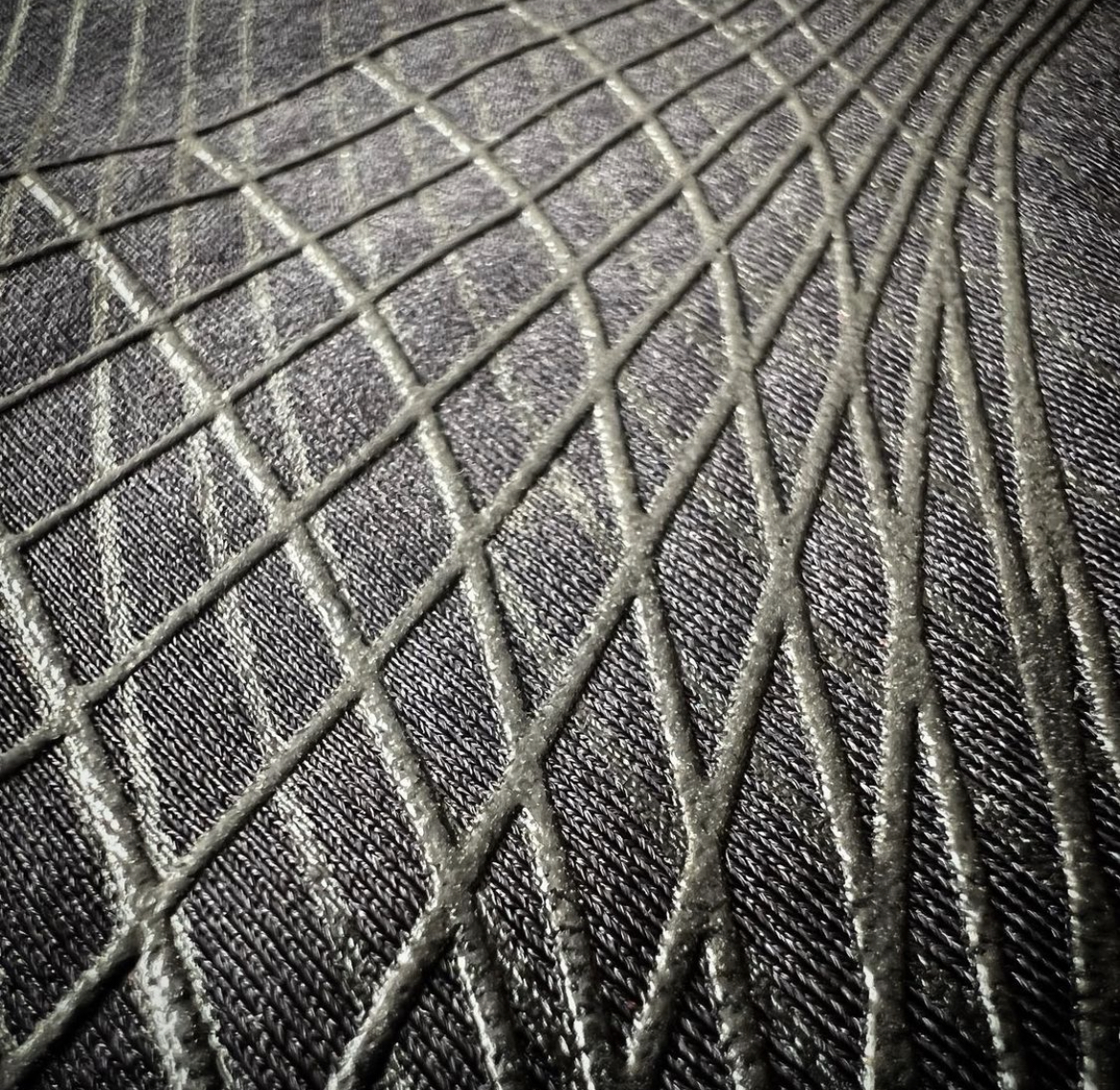 I had to make a duplicate of those select raise lines. And now back to those guides they serve as a guide when I am screen printing to overlay the raised lines over the flat ones here is how it looks the raised and the flat lines on the transparency sheets 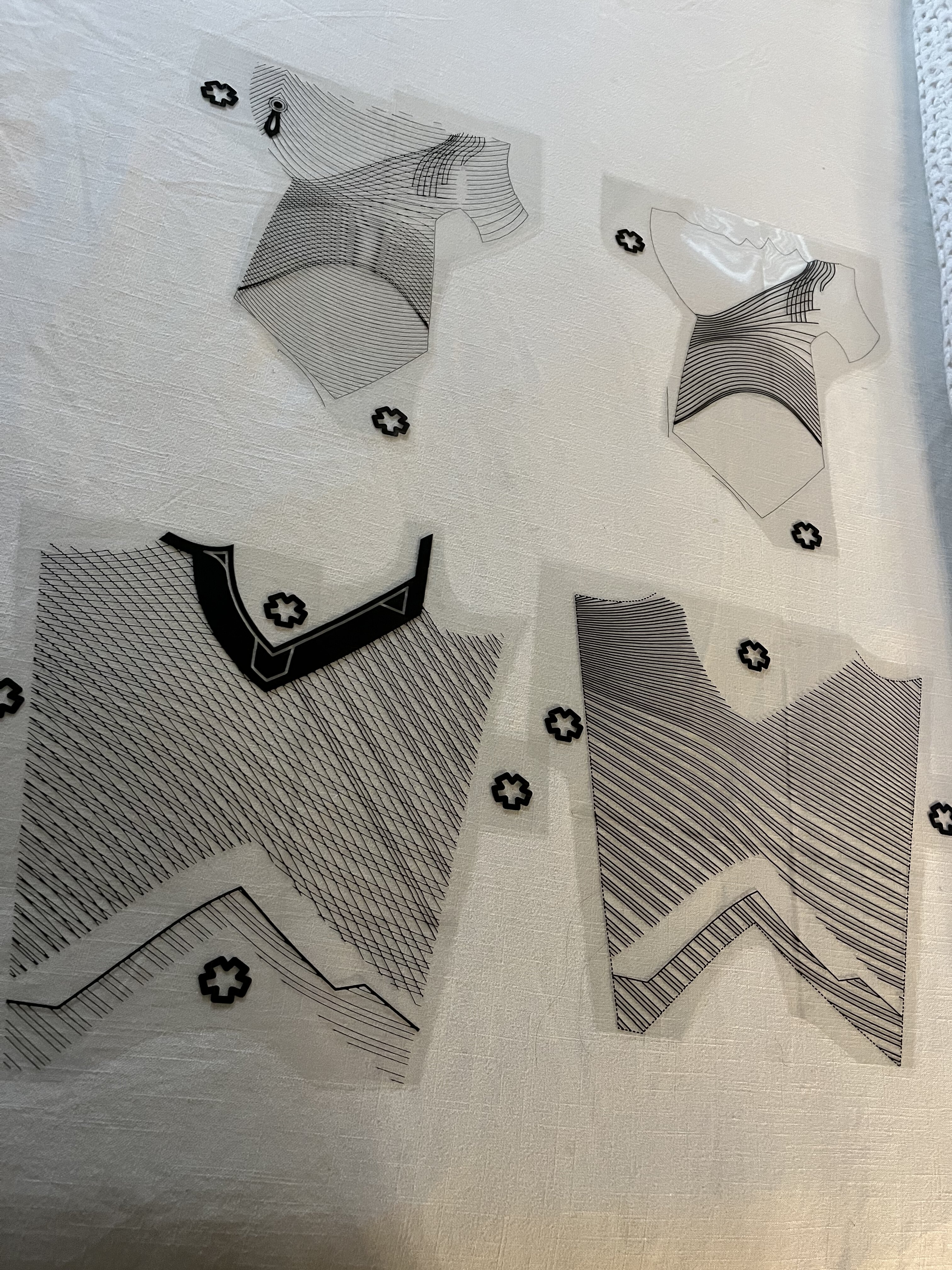 my v1 of this suit does not have the raised lines and after some research I found that the suit is actually more detailed than I thought, having raised lines all over the suit not just on the arms and forearm but also on the sides back and the thighs. Currently right now I am still printing and putting everything together the next update will be the webs and the raised basketball texture on the red part of the suit.

*update*
Hello again everyone! I am back with updates, I have been busy with everyday things and I was finally able to print up and assembled the webbing and texture vectors 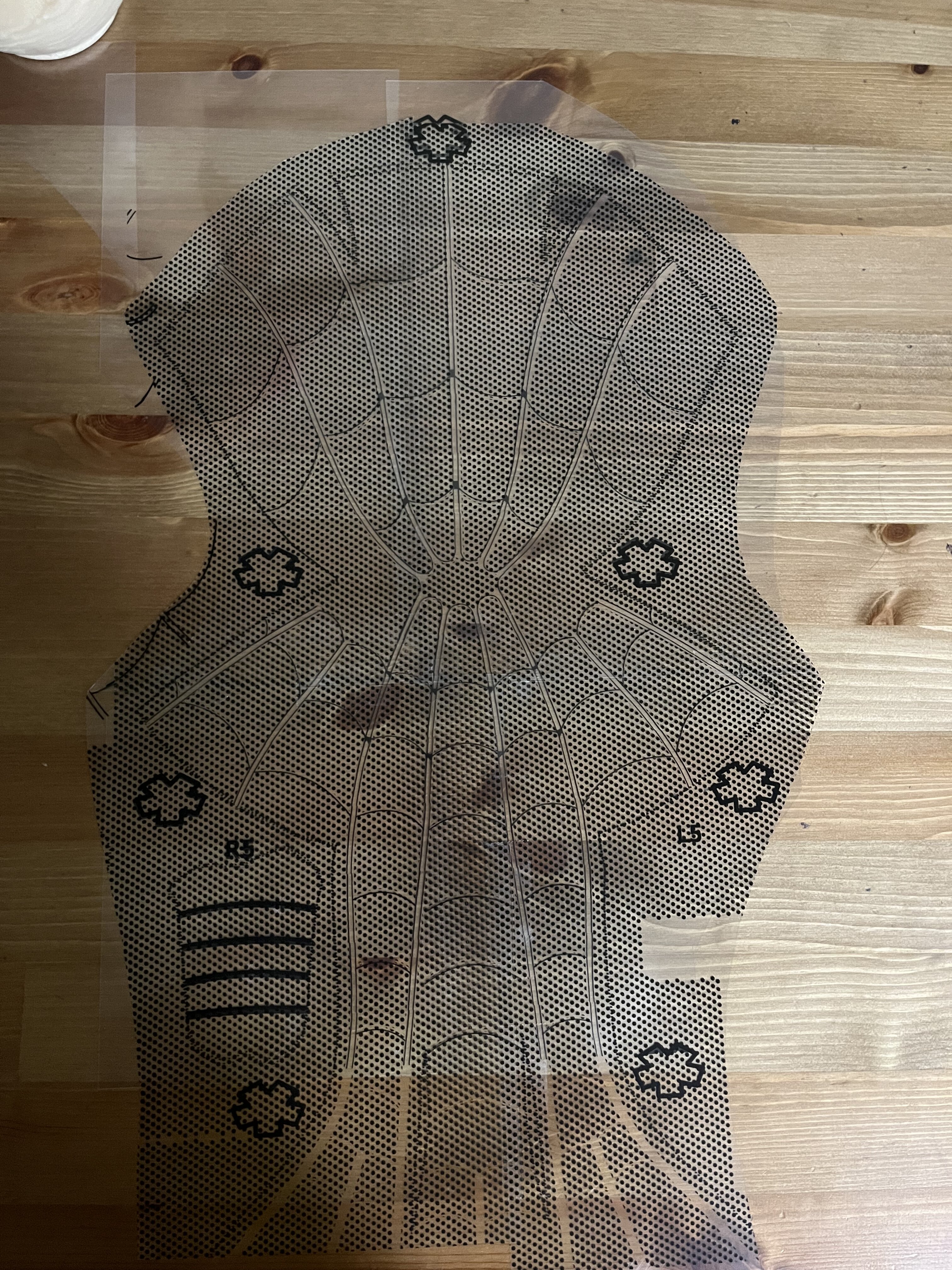 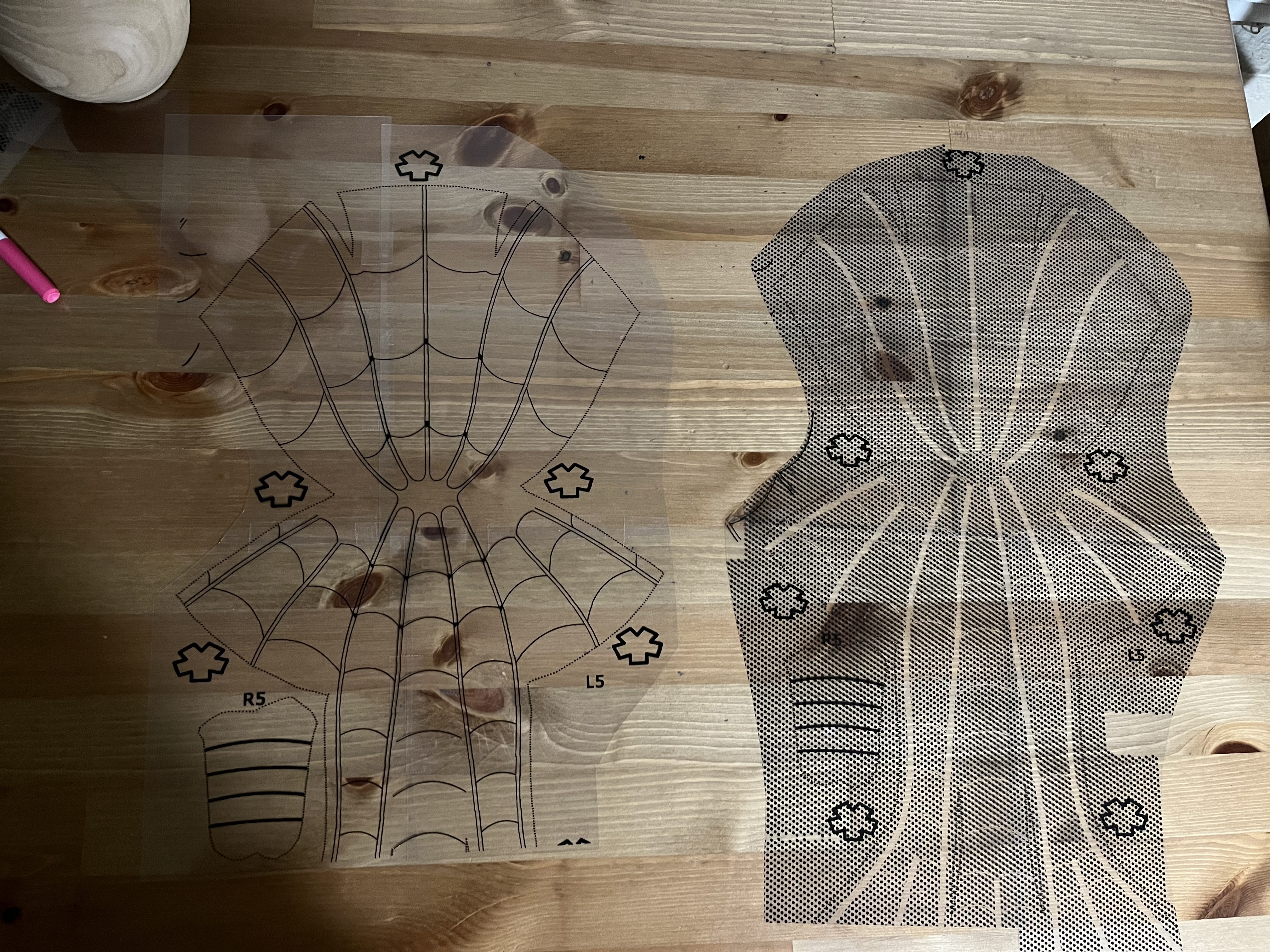 Also I am not ignoring the comments left on this thread I just don’t quite know how to responde to them just yet I am still new to this platform, I do not have an Instagram just yet to post content, I am still considering it. The next step now after having everything printed out is fabrics, I will be posting updates soon, thank you to everyone who is following this thread and those who have showed interest in my little project thank you all!!

*UPDATE*
Hey everyone!! Sorry for the lack of updates I just got back from vacation and also finishing the screen printing my TASM 1 suit. I am currently screen printing the black sections of the suit starting with the arms, so far after some test with the ink I am to a point where I am happy with the raised details of the print. 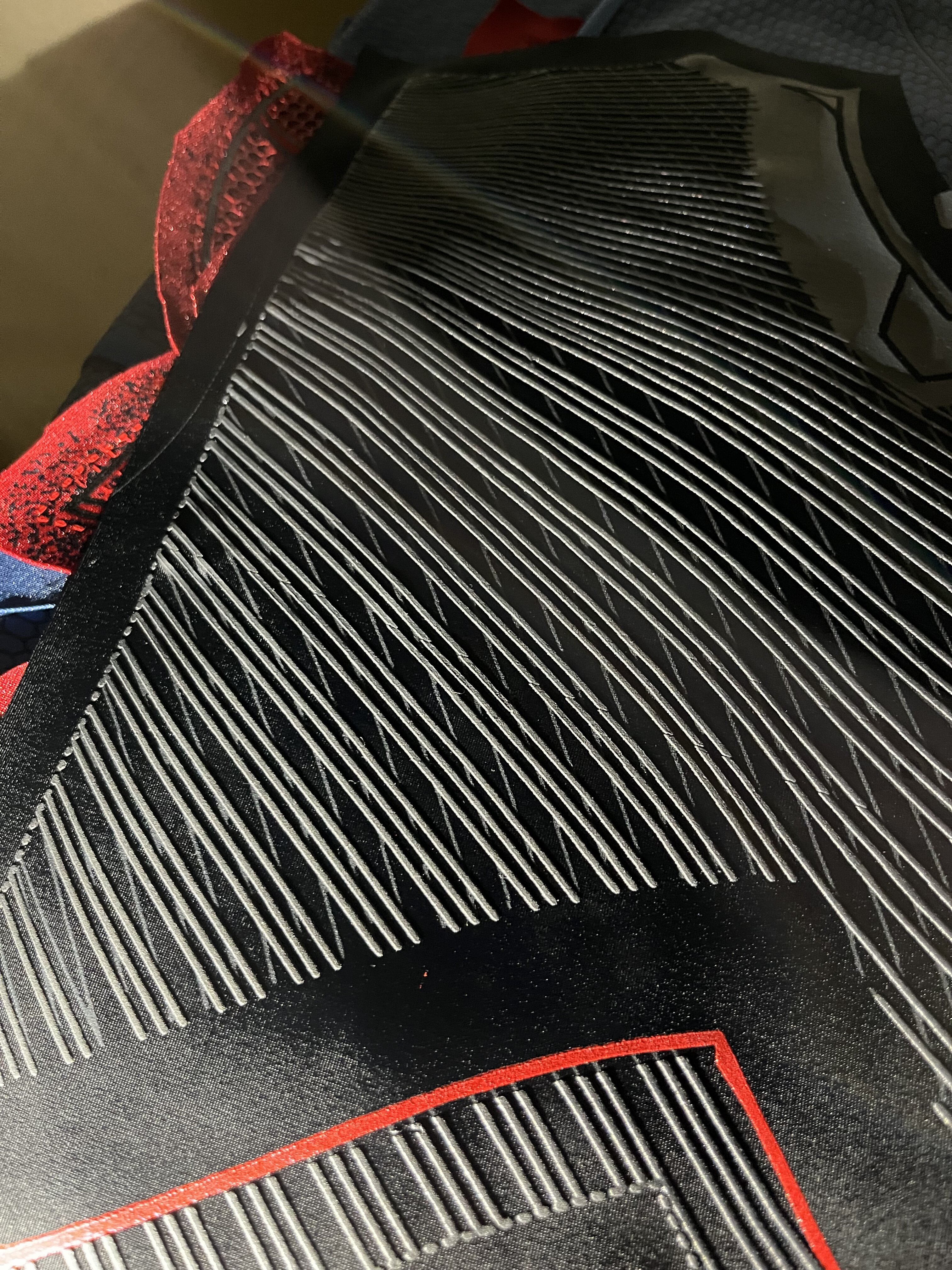 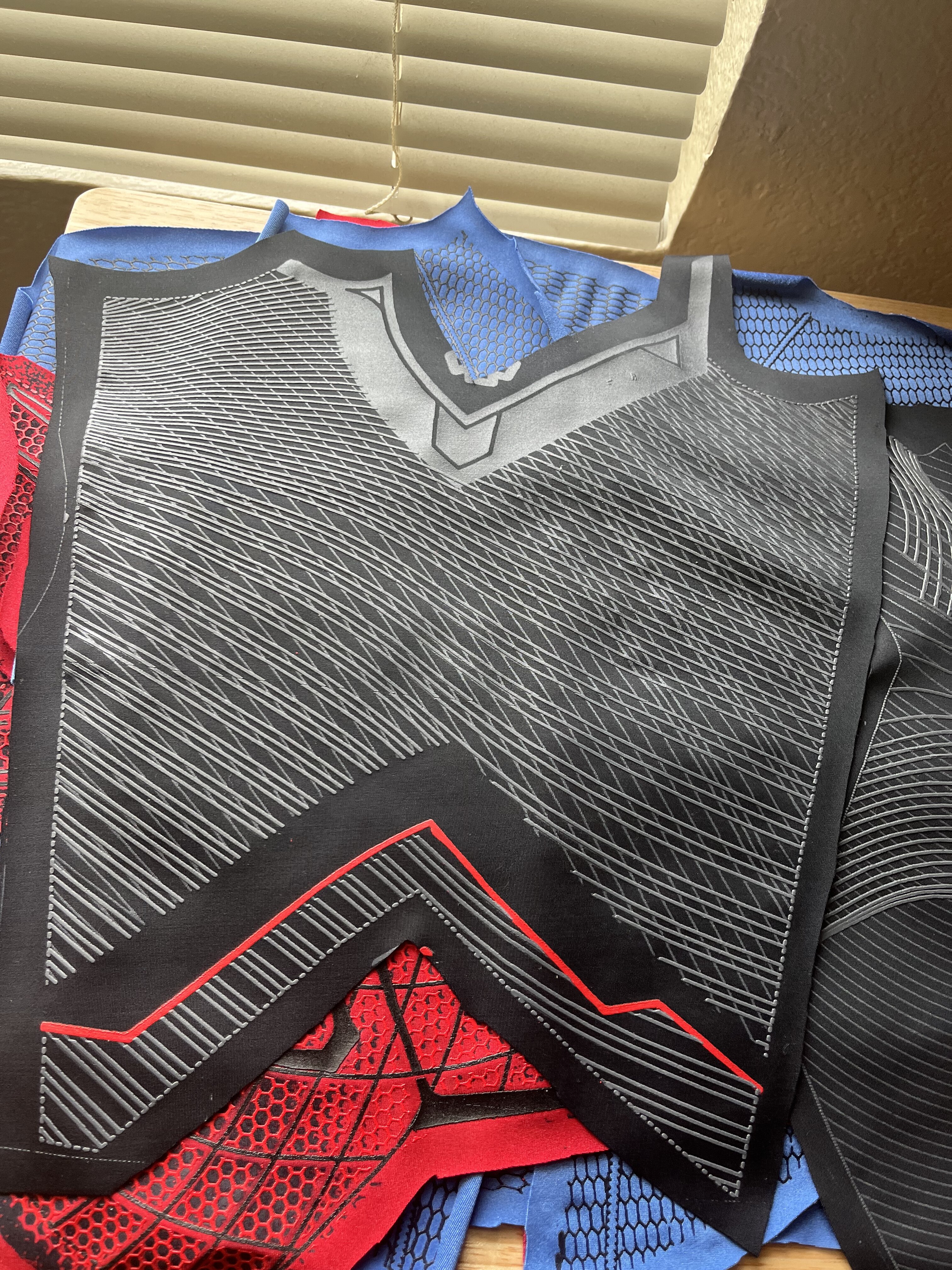 I will be updating you guys more once I start on the red sections!


*UPDATE*
I am currently printing the red sections and here’s a pic of the boot I just did, it came out pretty good 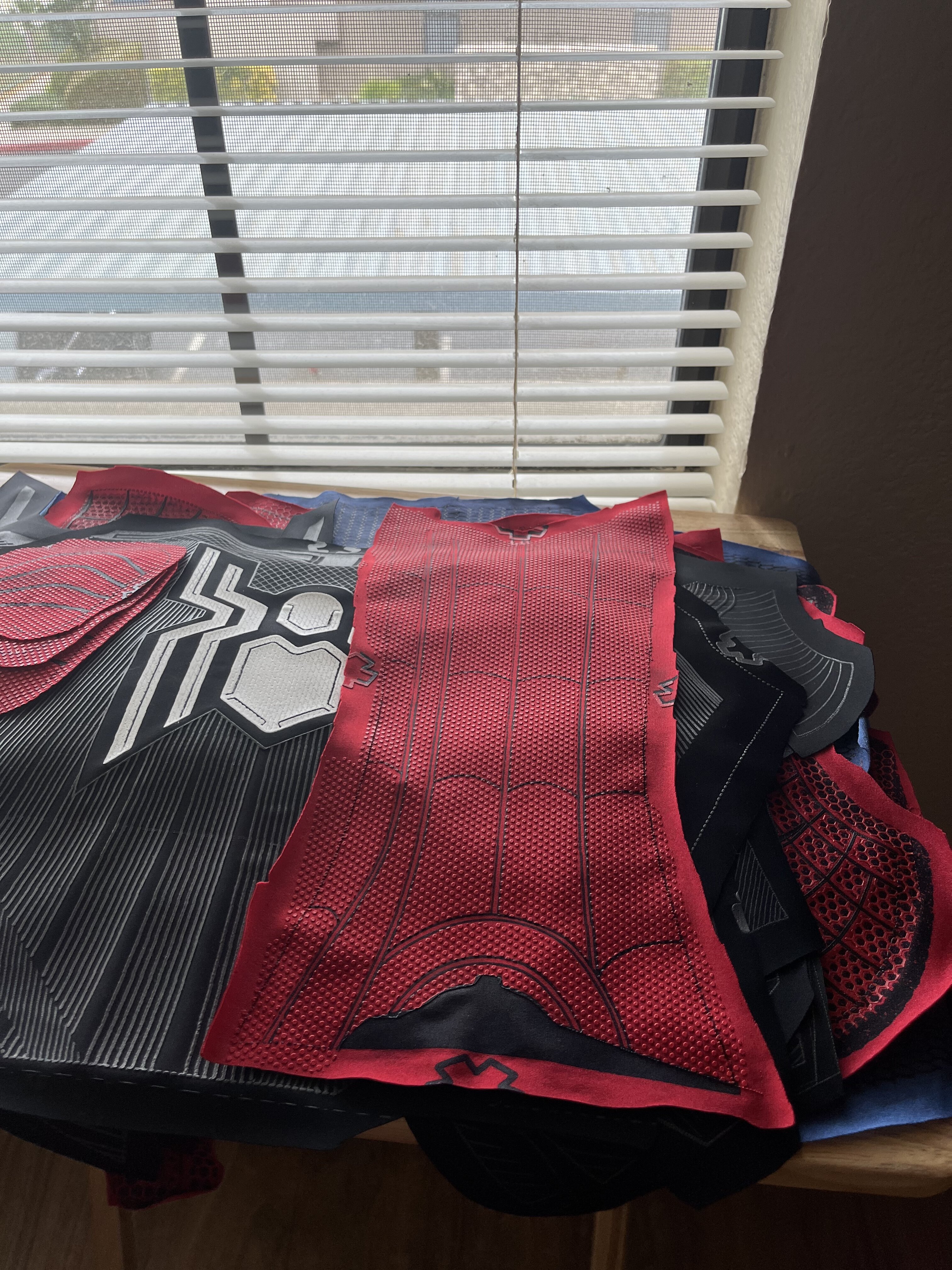 can't wait to see the progress on this, the screens look great

Wow what is your IG I gotta follow this progress

Thank you very much for reading my thread! For now I do not have an Instagram but maybe later on I will make one

chaosprince said:
can't wait to see the progress on this, the screens look great
Click to expand...

Thanks man I really appreciate it!

jvear12190 said:
Thank you very much for reading my thread! For now I do not have an Instagram but maybe later on I will make one
Click to expand...

you inspired me to do the same but I just cant find anywhere online to get screen printing patterns like this. Where do I go for them?

heybluguy said:
you inspired me to do the same but I just cant find anywhere online to get screen printing patterns like this. Where do I go for them?
Click to expand...

I actually make them myself, I purchase the pattern through scratch threads and I edit them in a photo editing program to make them as vectors fancy word to say outlines, I use affinity but photoshop works too. Then i print them with a regular printer on to transparency sheets and I assemble the sheets together using transparent scotch tape. it’s actually very simple to do it just takes a lot of time. I don’t know of any one who sells them ready to be screen printed.

Thursday at 4:22 AM
Bubble Ape