RPF PREMIUM MEMBER
In this post, I’ll be covering a recreation of Spiderman’s stealth suit (affectionately referred to as the ‘Night Monkey’) that is featured in the film Far From Home. Here are a couple of images from the library of reference I’m using to put this project together. 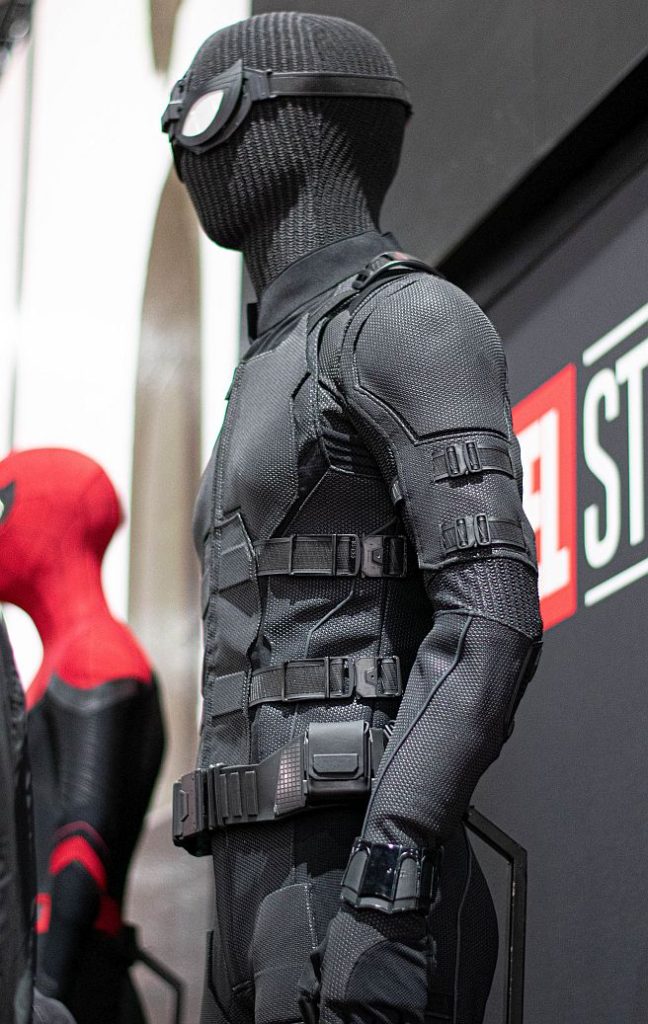 I began, as always, by developing the base pattern. I started by building a simplified muslin mock up based on one of my stock patterns and customized to the client’s measurements. 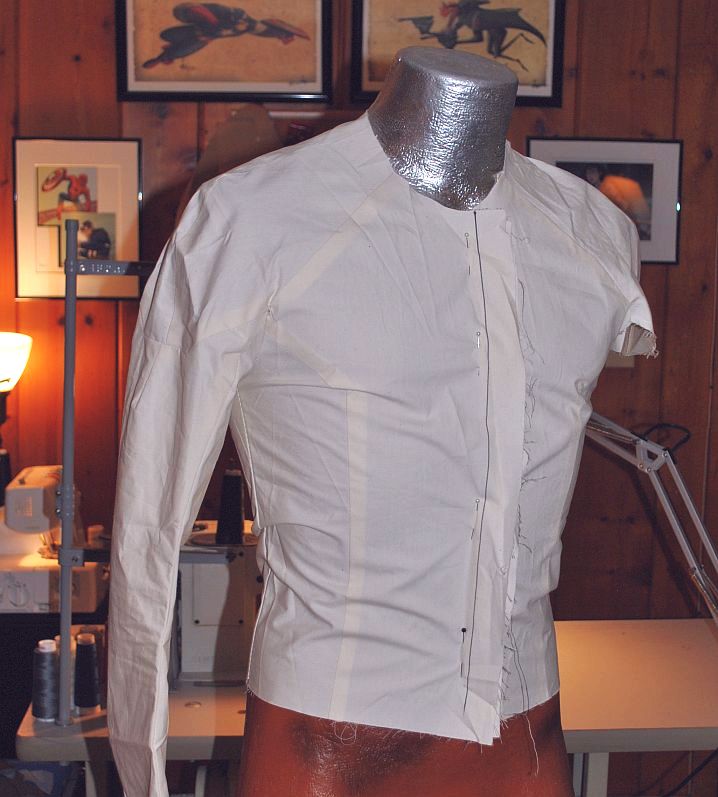 Once I had the base pattern assembled, I sketched out the details for the vest and sleeves. 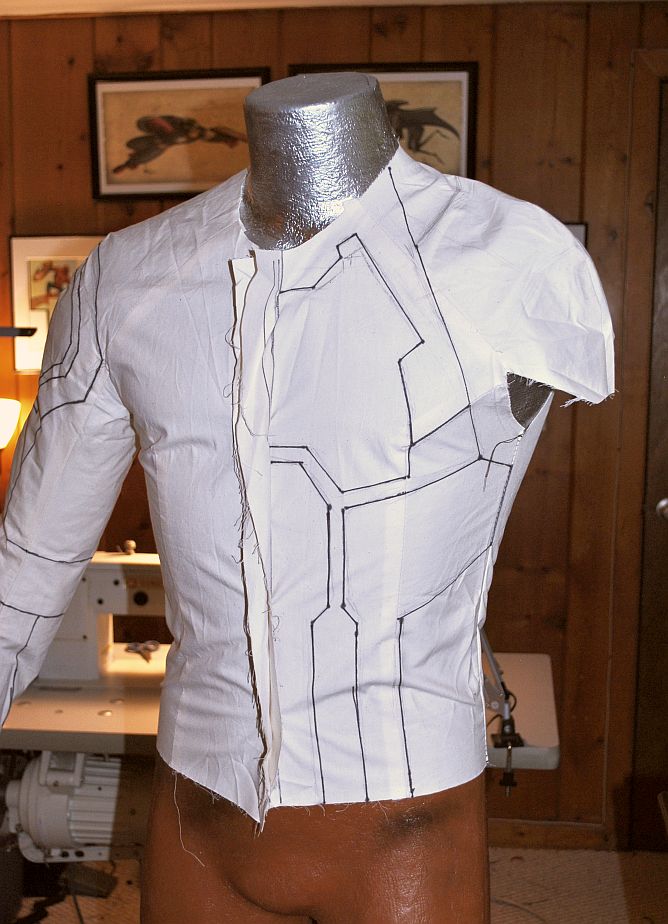 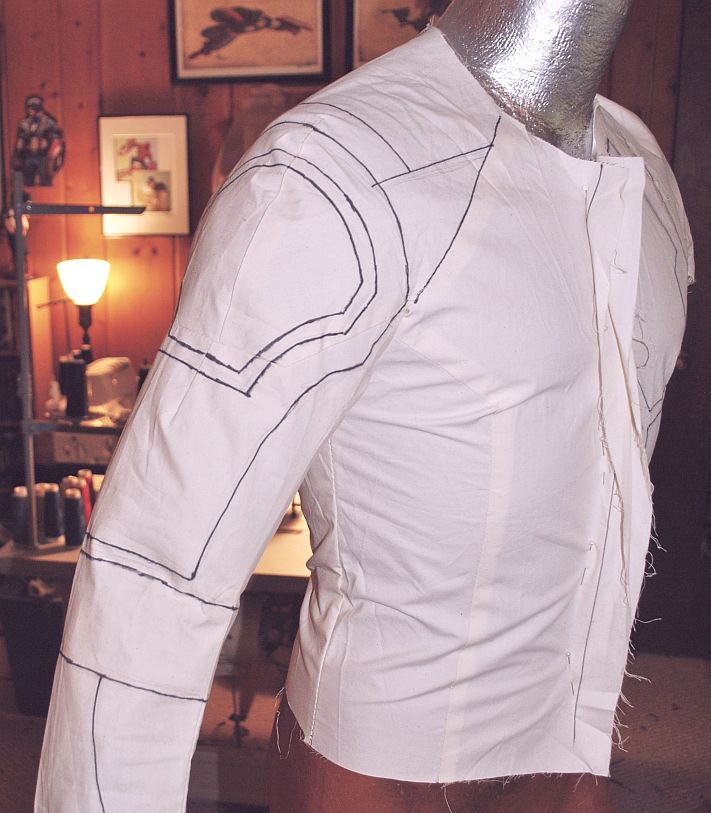 At this point, the mock up was sent to the client for a fitting. Once I had it back with his notes, I was able to begin finalizing the patterns and building the costume.

I began with the vest. Using the altered muslin mockup, I cut it apart and began transferring the patterns onto Swedish tracing paper, truing all the edges and curves and then using those patterns to begin cutting an assembling the piece. 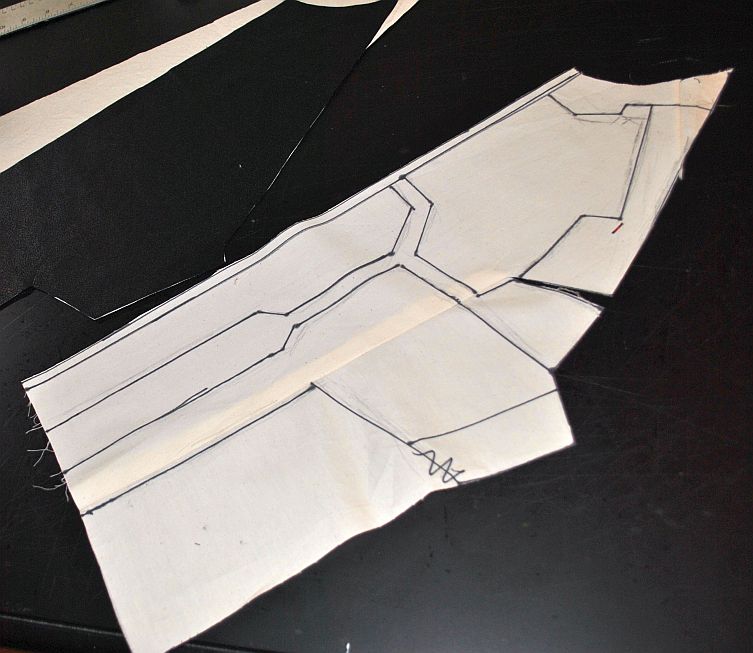 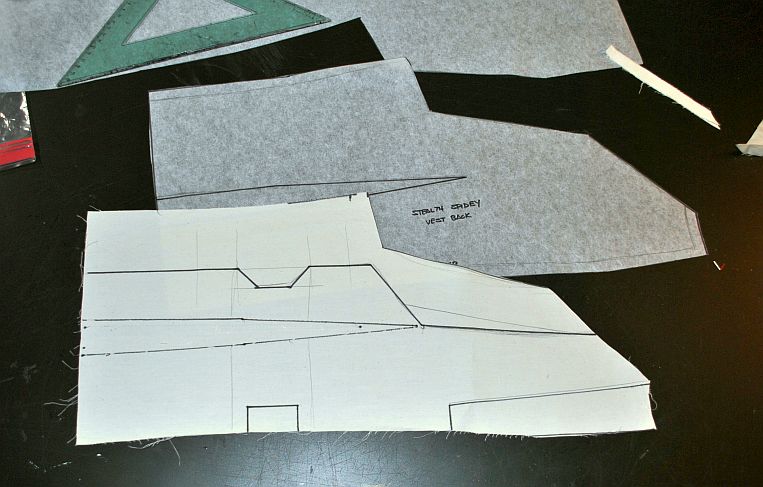 The front of the vest is constructed from a muslin base covered with black jumbo spandex (on the matte side). The textured areas of the fabric are made primarily from bullet stretch fabric. The fabric is relatively thin, so to give it a bit more weight and to prevent it from stretching where I didn’t want it to, I backed it with muslin.

When backing or layering fabrics, I typically take the backing layer (in this case, the muslin, cut out the piece and spray it with Super 77. Then adhere that to the back of the shell fabric and cut out the final part.

While I, unfortunately, don’t have any images of this process for this suit, it’s very similar to the process used to create the front plates and chest for the Punisher vest.

The detail ‘pads’ in the abs were also made by layering pieces of 2mm foam under the muslin and bullet. 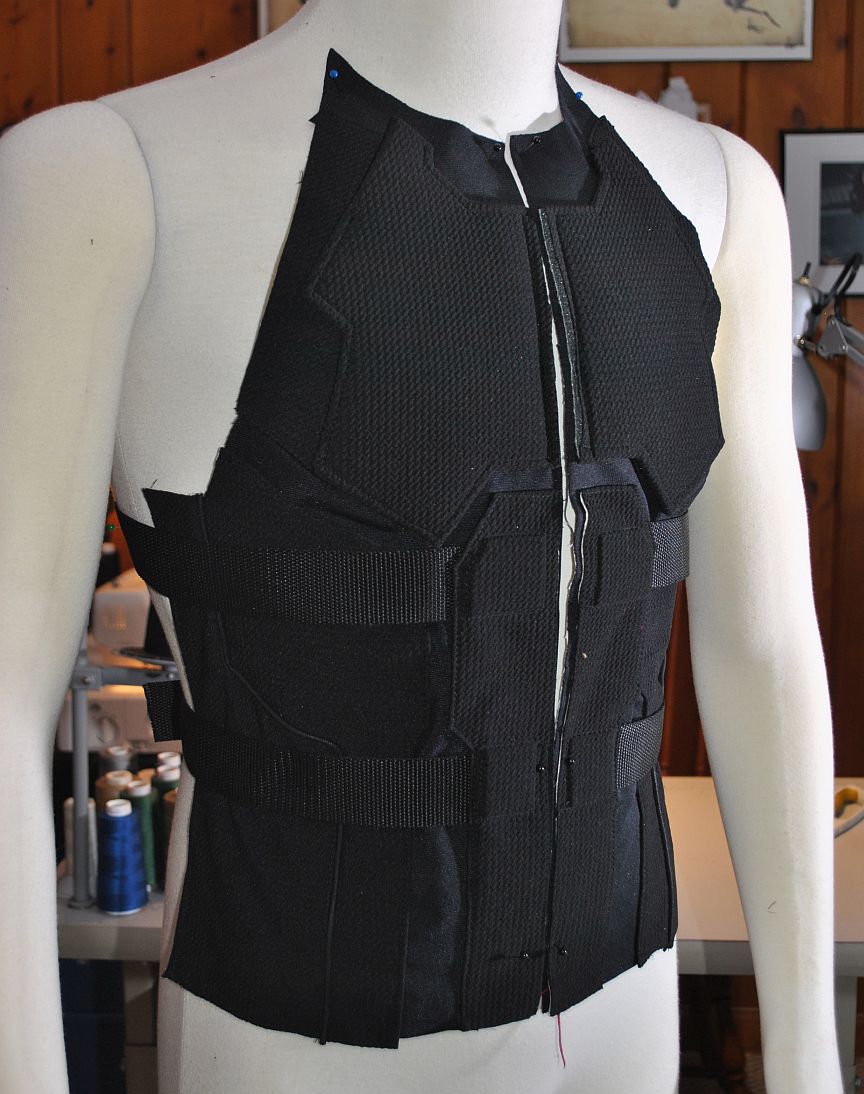 The lower sides of the front of the vest are bullet backed with muslin and a very thin faux leather piping detail. The straps for the ab section were added at this point as well.

The back was made out of bullet backed with muslin and, once completed, the sides were sewn together and the edges bound off with strips cut from the bullet.

The next pieces added where the padded details under the arms. These were made out of thin faux leather backed with headliner foam and the ‘ribbing’ detail sewn in. 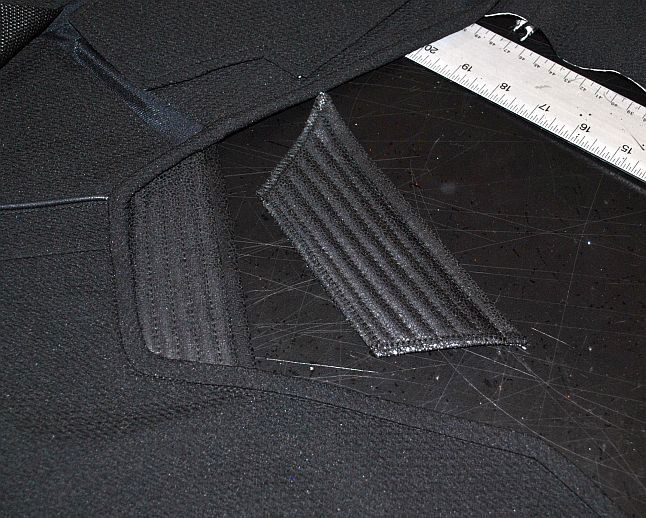 With the sides complete, I then needed to add the shoulders and collar. The shoulders are bullet and muslin along with some headliner foam to give them a little more structure as well as support and padding for the straps and buckles that will go over the shoulders. 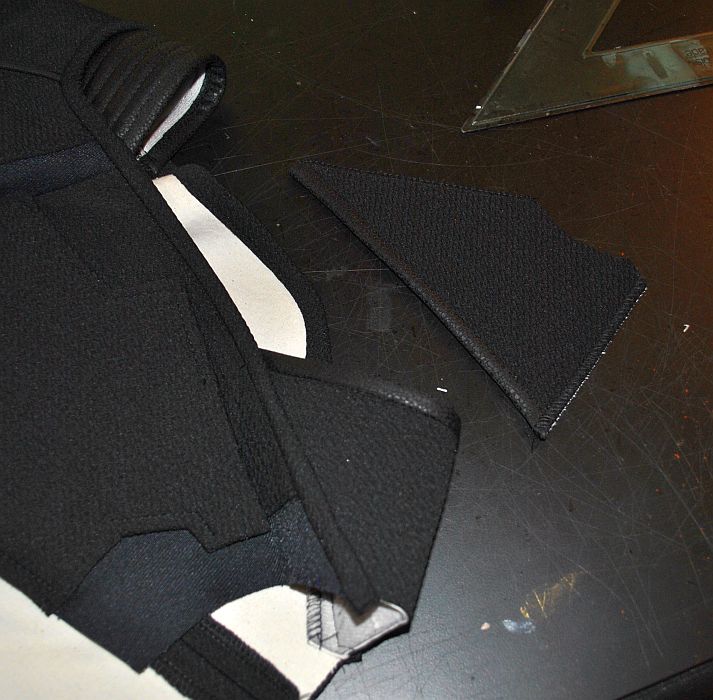 The collar was added and the front and bottom edges of the vest bound off and a temporary zipper added for testing. 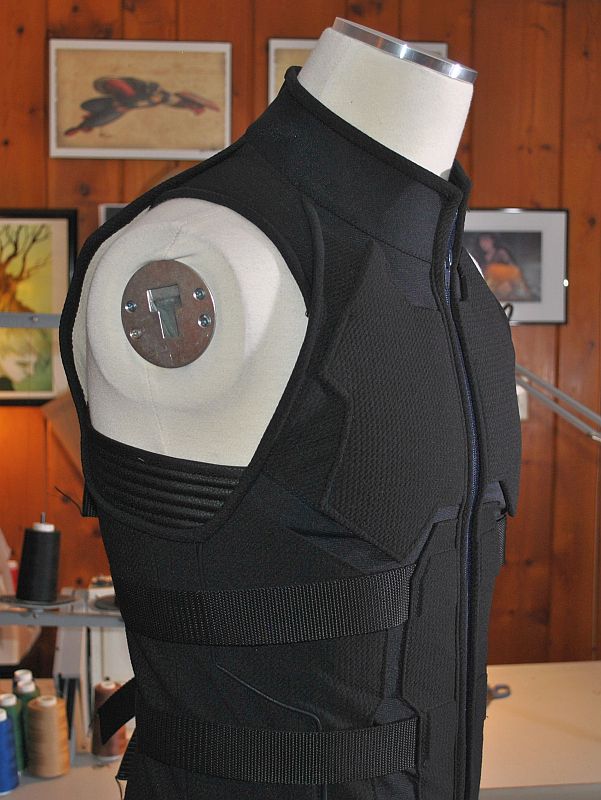 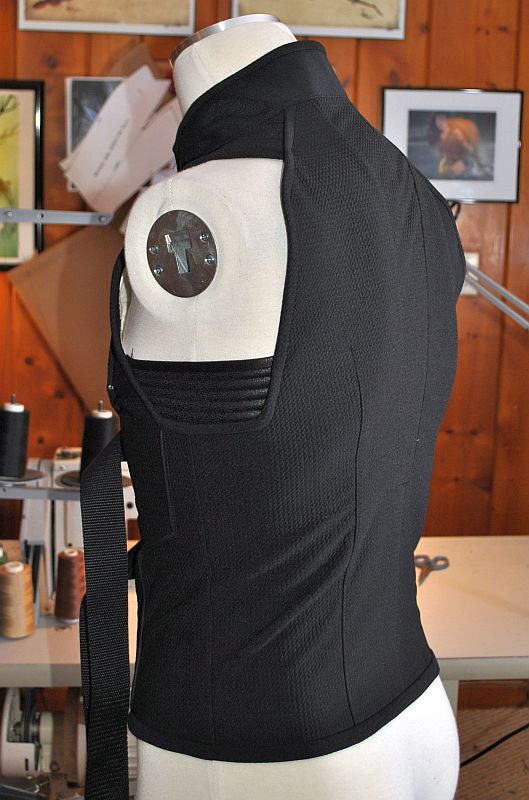 The ‘armored’ back plate will be constructed and attached separately. In the meantime, I needed to begin working on the hardware for the suit as it will need to be incorporated as the suit is made.

Since the buckles on the suit are fairly specific and obviously custom made, as well as none of them actually needing to be functional, I decided to have them 3d modeled and printed. For this task I turned, naturally, to my long-time collaborator, Jordan from Jordan’s Ironic Armory. 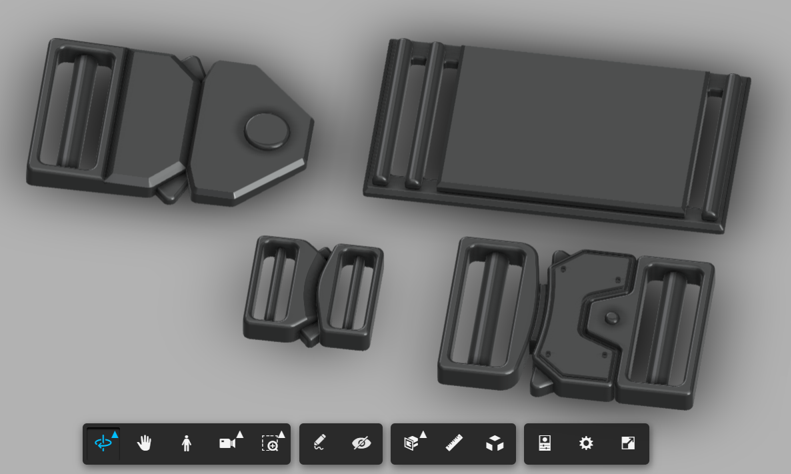 Jordan created models for each type and size of buckle, printed them and then created a mold for me to use for casting. Since there are several copies of each one, I just asked him to create the mold and then I would be able to run off the resin copies as I needed them. 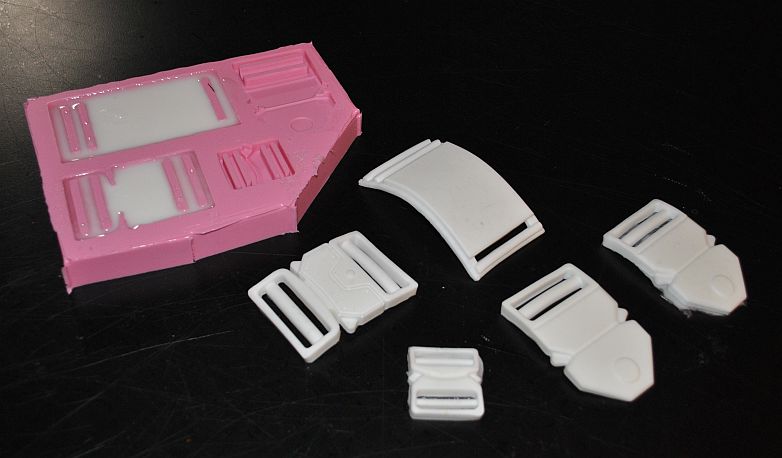 These will all be cleaned up, sanded and painted as they are added to the suit. Here are a couple of images of the raw casts being test-fit to the vest. 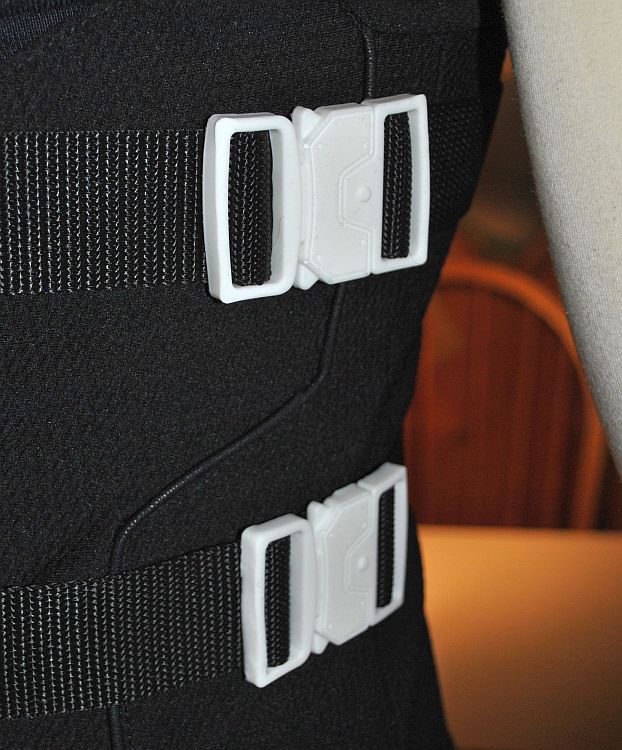 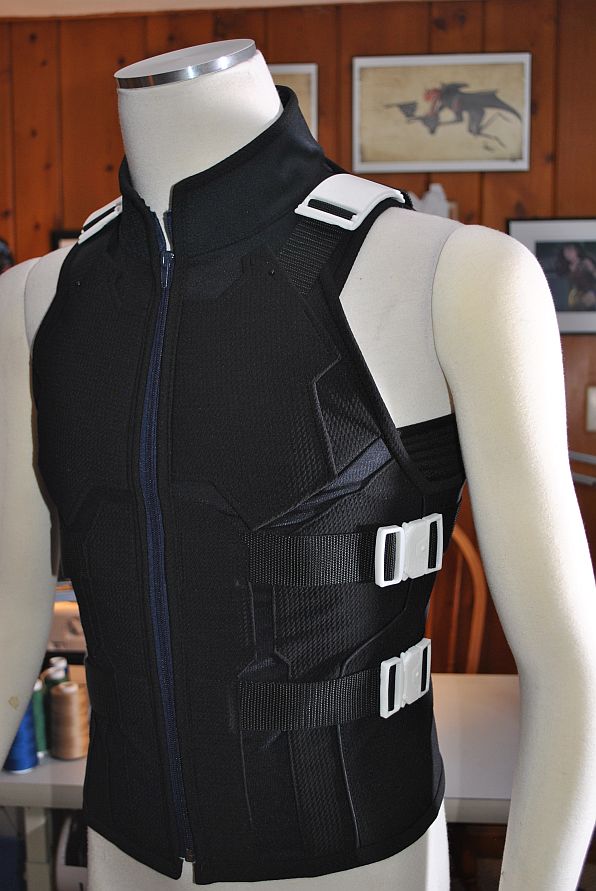 The next steps will be to finish the vest buckles, build and attach the back plate and get started on the shirt. Stay tuned!

Thanks guys! I hope to have more to share soon!

You know how I feel, my friend. You are a master of your craft. It's looking even better than I could have dreamed. Can't wait to see it in person!

arivin923 said:
You know how I feel, my friend. You are a master of your craft. It's looking even better than I could have dreamed. Can't wait to see it in person!
Click to expand...

Almost time for a fitting!

You're incredibly talented! Glad I get to look at your WIPs

RPF PREMIUM MEMBER
Hi all! It's been on hold for a while, this build has had some major progress. I'll be working on updating the write-up but here are a couple of pics of the project now. More to come, stay tuned! 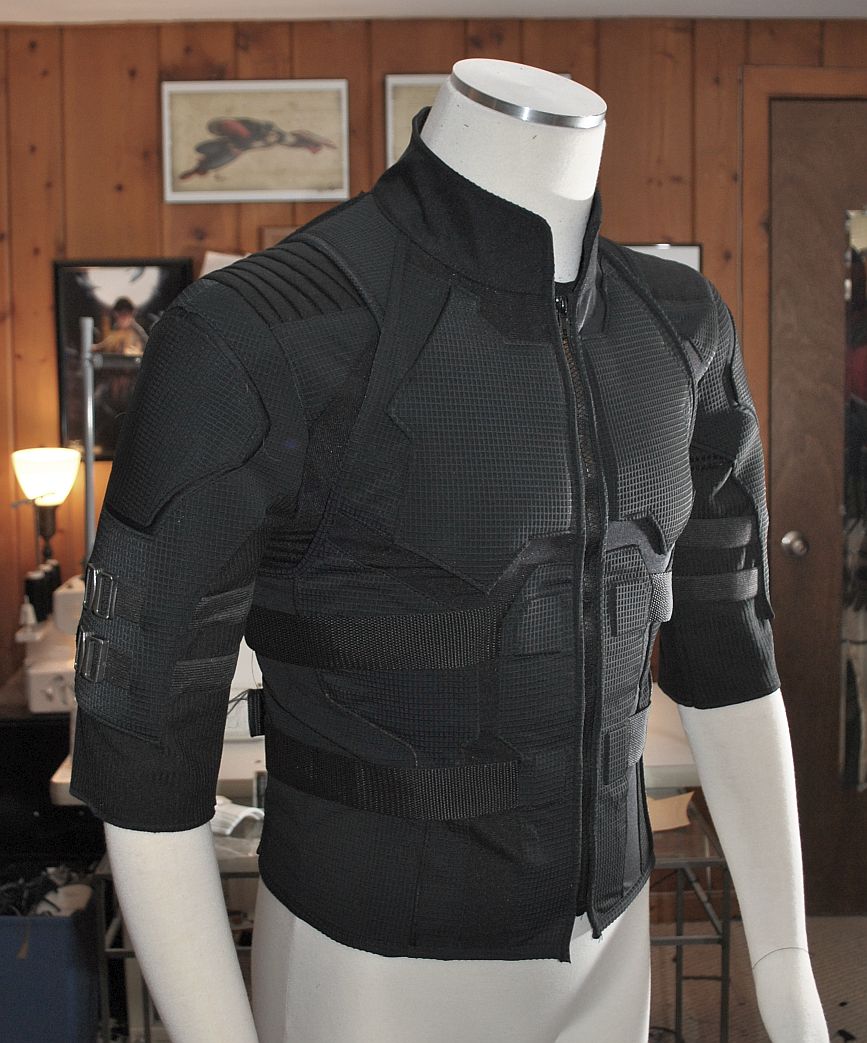 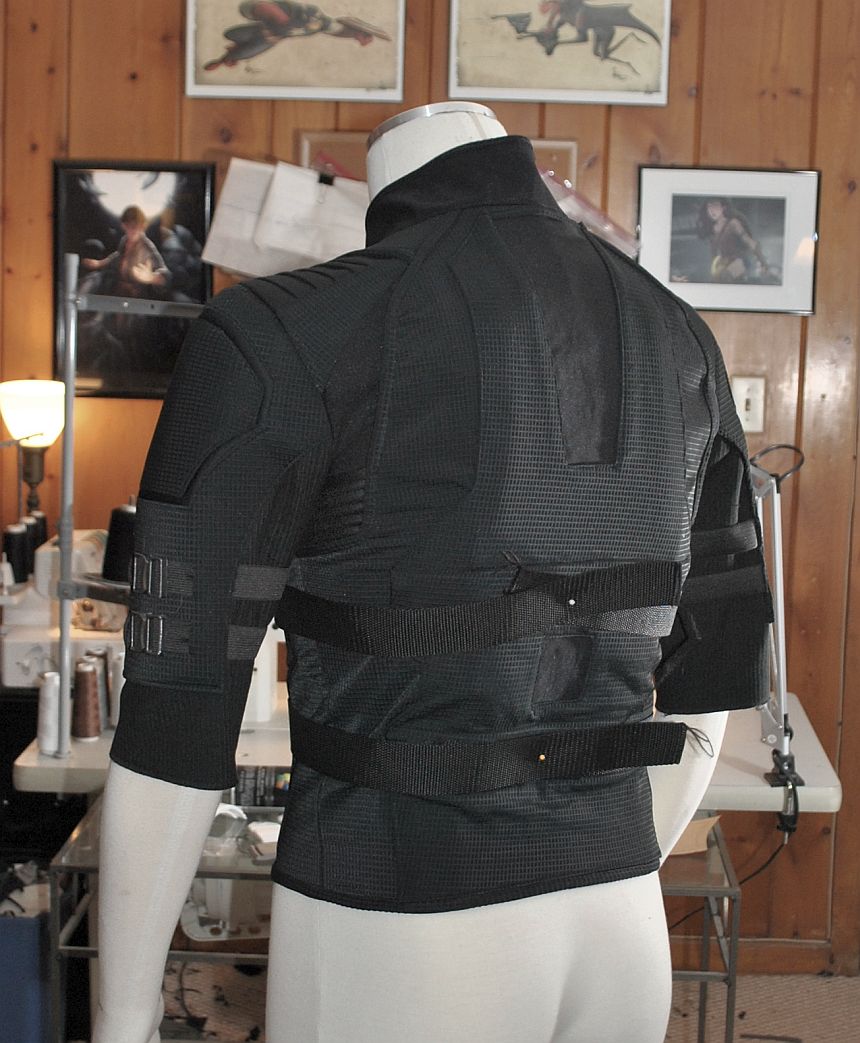 I just keep coming back to stare at how beautiful it's looking. I can't wait to see it in person, let alone wear it!