Spacehip Pisces from The Starlost (1973) Episode 4

First post - first replica scratch build for me, hope I'm not in the wrong place....

The Spaceship Pisces was in Episode 4 of the show, and was depicted as a long range scout ship sent out from the Starlost Ark. It had a crew complement of 3 and an (in-show narrated) size of "60m long, 10m wide, 20m deep with a 12000 m^3 displacement" and was powered by "twin gigomatic(?) reactors".

I've attached the best stills of these areas, and included a still of the the 1:1 studio model so I can work backward as the actor standing next to the doors is Lloyd Bochner, who was 5'10.5" according to IMDB - so 6' given the boots his character was wearing (...it was the 70's...) (Working from that set piece scale, I've worked out the entire ship should have been 7.5m tall, 17.5m wide and 31m long - no-where even close to the narrated in show size)

Any tips, pointers, or suggestions would be appreciated!

P.S. the episode can be found easily online, and the video seems clearer when watching than the stills I grabbed...

I've been working on the basic shape - getting close. My wingspan might be a bit stubby still, based on the front view, and the nose and wingtips need some adjustment on the angles, but its getting close.

I also discovered that there was just one model built and it was 4.5 feet long. It was repurposed by adding bits and repainting as an ambulance (red and white) and police ship (beige). Here are the screengrabs from episodes 11 and 16 I've also got for reference.

You are pretty close, but it seems you made the main body a bit too thick,
maybe this image will help

So I adjusted the model proportions a bit, took scaled measurements off the digital model, drew the faces for the body and wings in inkscape to get scale templates and am now at this point, with panels all dry fitted together with tape. 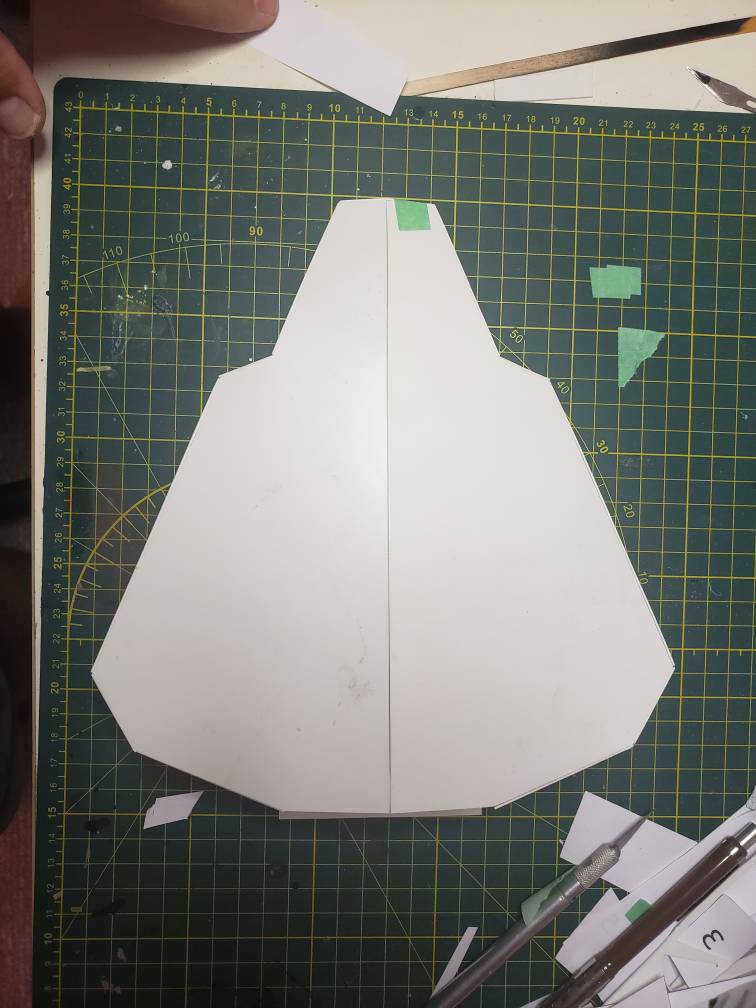 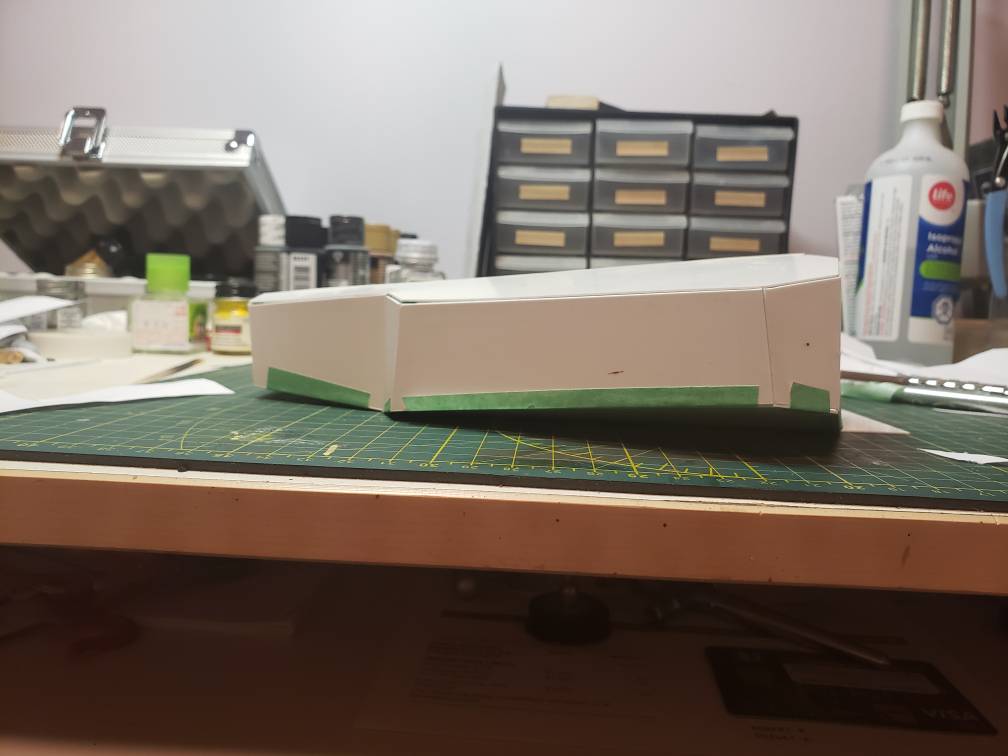 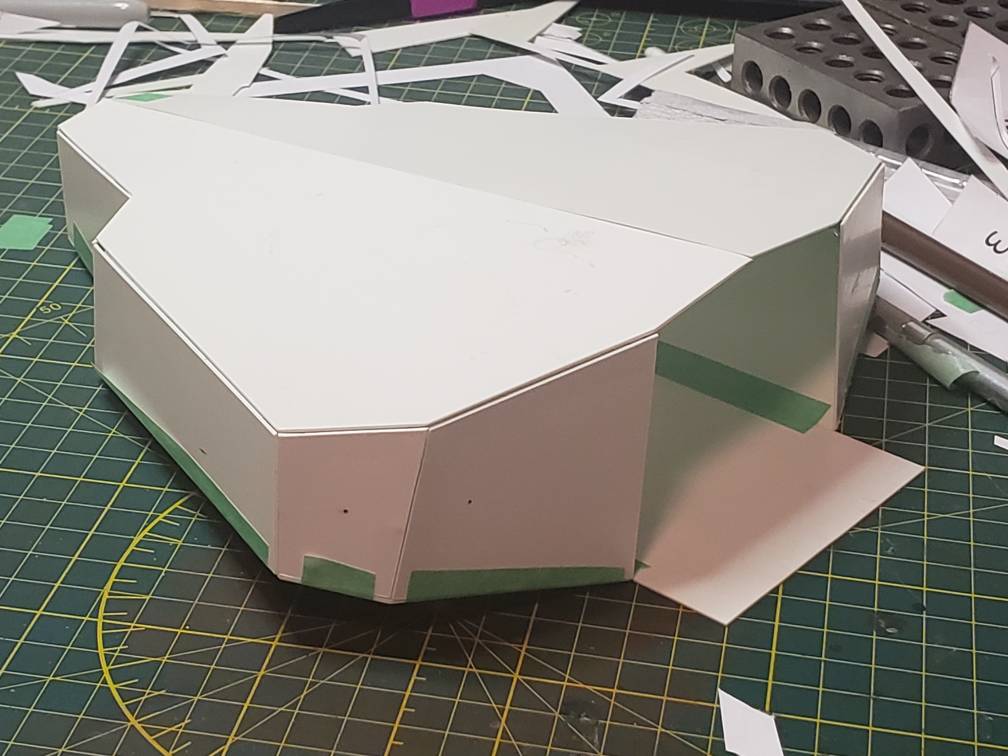 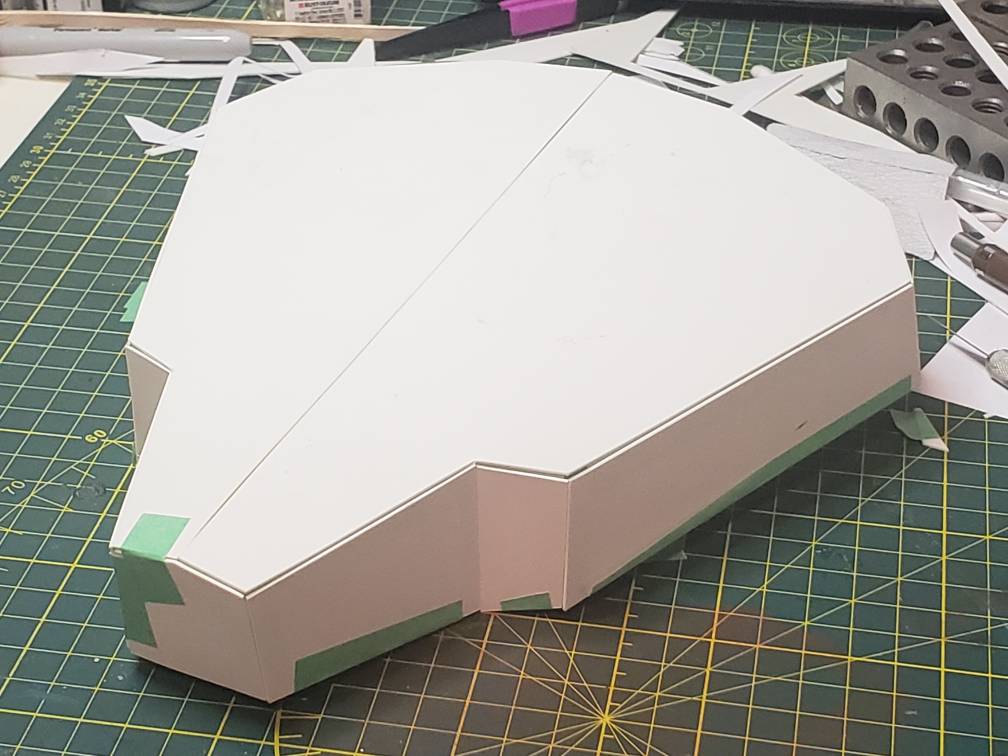 And as I discovered the studio model was 4.5 feet long and my build scale will end up around 12.5 in long, if a mod wants to move this thread to a more appropriate sub-forum, that would be appreciated.

Slow progress after moving across the country....

I played with the styrene model to get better proportions and to work out the faces making up the cockpit windows, then took measurements of that and refined my 3d model. Now that I have I 3d printer I knocked it out as a single shell print to get it back in my hands as a full model...

Still didn't feel that the nose shape was right so remodeled it and am happy, so moved on to printing out a thick shell version with openings for adding the pulsing lighting. After a few rounds of spot putty, sanding and filler primer I'm ready to start making up the details. As the detail elements and greebles repeat a lot I figure its time to learn some basic mould making and casting.....

RPF PREMIUM MEMBER
One of my favorite shows growing up. My oldest daughter and I torture my wife and watch it on dvd. Very nice work so far. I'll be watching this with much interest.
Cheers,
Kevin

Death Star Towers from Jedi - real and replicas in progress