This is the studio scale kit that was just released. I thought it would be a quick and fun build between larger projects but it's not turning out that way just yet. Getting the hull pieces to fit together on this has been a big challenge. The geometry is off just a bit making the attachment difficult. I added wood inserts inside at the mounting points to support a Panavise stand. The Ultraprobe is actually quite large...I think the curved hull makes it seem a bit smaller than it actually is.

To add to the challenge (doing things the easy way is just too boring) I'm replacing all the greeblies that are part of the kit with the actual kit parts. This kit was mastered digitally including the details. Identifying the kit parts used on the original was relatively easy since they all come from the Tamiya 8Rad. The details on the kit are basically the same configuration as the kit parts but just approximations. I think the real kit parts are going to look much better when it's all done.

Here's some pics of the hull nearly done and some of the kit parts compared to the details that came with the kit.

Thanks for looking.
-Doug

Thanks for this WIP Doug!

Can you please show us what you ve done to get the two hulls together and for the panavise support?

And did you get the decals from Jimbo?

Sure I can post more of the inside. It's not pretty but will do the trick hopefully.

I'm ordering he decals today. I've asked Jim to print me a set of the decals without the stripes so I can paint those on instead.

I'm finally getting a chance to get an update posted on the Ultra Probe Command Module. Some of these pictures are from a few weeks ago but I wanted to catch up on the pictures of the inside work before it was sealed up.

I started going a little overboard with styrene and foam ribs to strengthen the inside but these help to support the wood blocks at the mounting points. This way the stress on the wood block is transferred through the ribs and spread out evenly to the whole body. So far both mount points are very sturdy.

The large block is for the side mount and the smaller one in the middle is for the bottom. As far as I can tell from my research the studio model only had a single mounting point on the starboard side but for convenience I wanted a bottom mount point as well. The bottom mount point will allow it to be displayed with the starboard thrusters attached. I'll use a magnet to hold them on.
The kit came with laser cut acrylic windows but they don't fit the openings in the hull. The shape was too far off to modify so I ended up cutting my own acrylic and painting the inside surface very dark blue so the clear side would face out. These are epoxied into the inside of the window openings. The foam on there is to help keep them glued in place. Even with soaking the parts, cleaning off mold release, and scoring the insides I had a hell of a time getting the epoxy to stick to the hulls. They were thin enough sections that when they flexed just a bit the epoxy (which was stiffer) would want to pull away. The extra foam is there to help reinforce the glue joints.

This is just prior to glueing up the body. Pepsi can for scale. You can see the gap in the middle section. The middle was smaller than the ends for some reason which was one of the major sources of frustration getting this thing together. 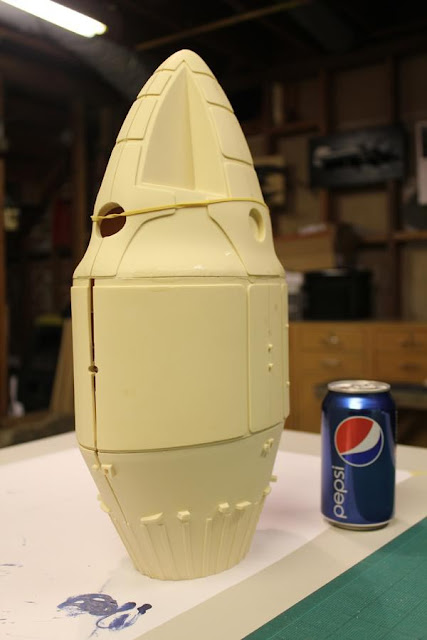 Here it is as of today. The seams are all puttied and sanded. The primer is Duplicolor sandable over self-etching. There was a lot of bondo work to clean up the seams and some warped spots on the rear body parts. 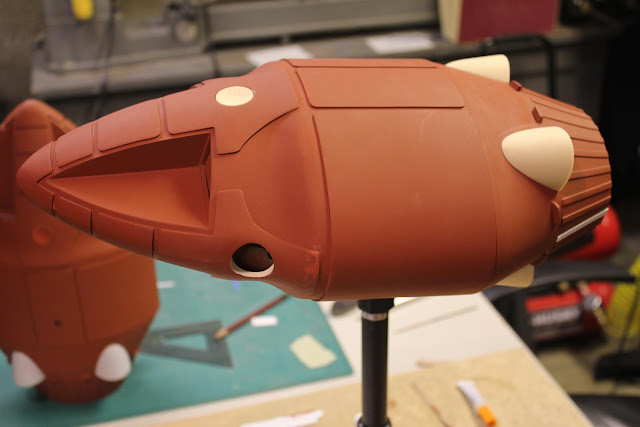 The rear plate will be scratched with kit parts. I used a 1/8" thick styrene ellipse to substitute for the kit rear plate for assembly and will cover that over. The hole is for glue access to strengthen the seams and add some extra ribs in the rear after it was assembled. 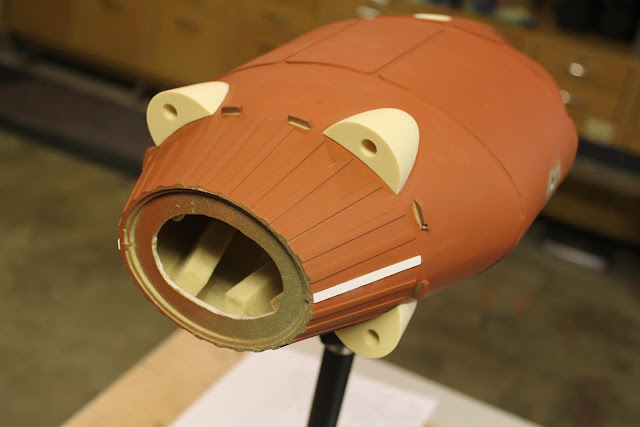 Panavise stand in action. These things are great. 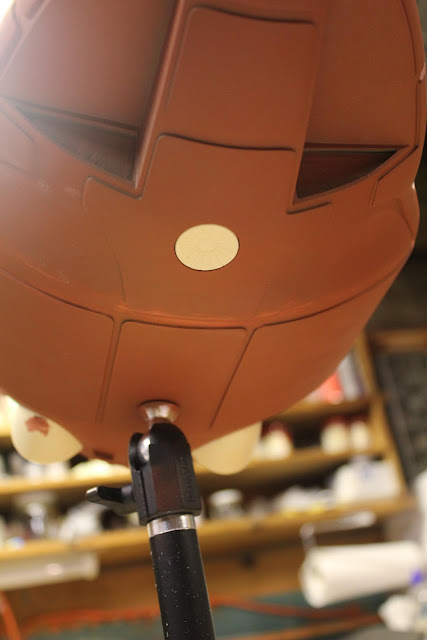 And finally, here's a size comparison shot next to the BSG studio scale shuttle, just for fun. 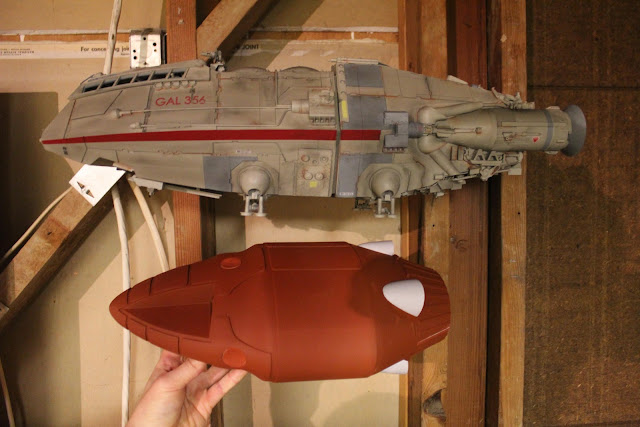 The caption for the final picture with the BSG shuttle should be "Hey man, wanna drag?"

Man, that is a HUGE CM. Who's doing the kit?

Here's where I ended up tonight.

Most of the clamp arms have the original kit parts on them now. 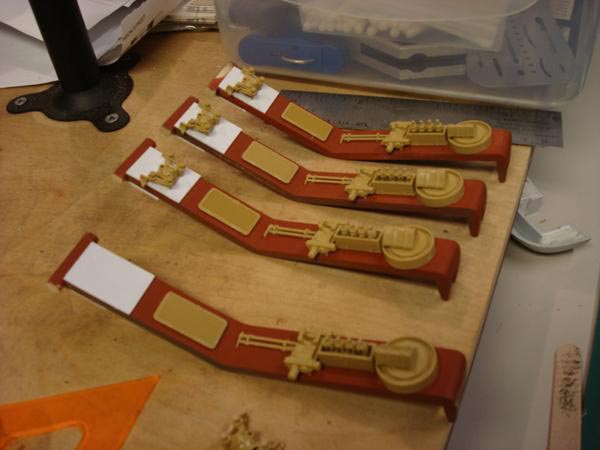 I sanded down the corner and forked part of the clamp to have a rounded taper on the end like the studio model. 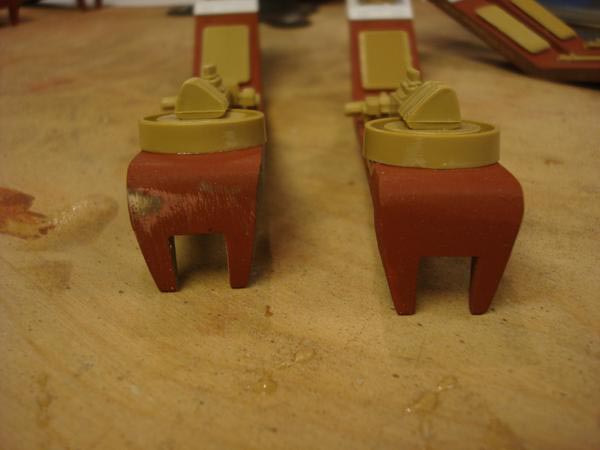 The hinge part of the clamp arms works great but has too much play in it. To solve this I added styrene backing behind the notches and strengthened them with epoxy putty. The rotating part of the clamp arm (the axel, I guess) had to be sanded down carefully so it just fit snug in the slot. 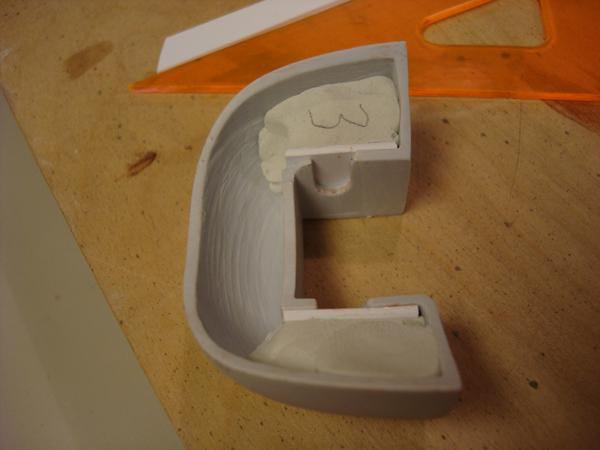 To lock the clamps in place I glued a small strip of styrene after it to hold it in place. 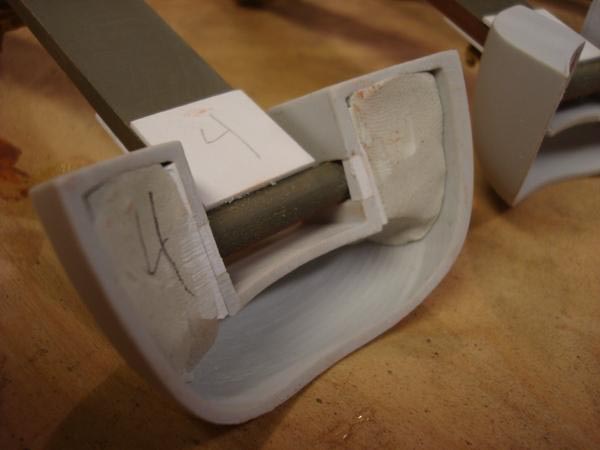 Now I'm working on scratching the top side hatch so that it matches the studio model. Hopefully some more progress tomorrow. Thanks for looking. 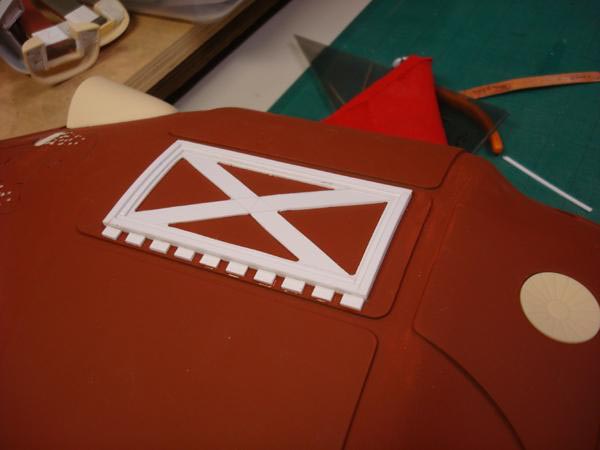 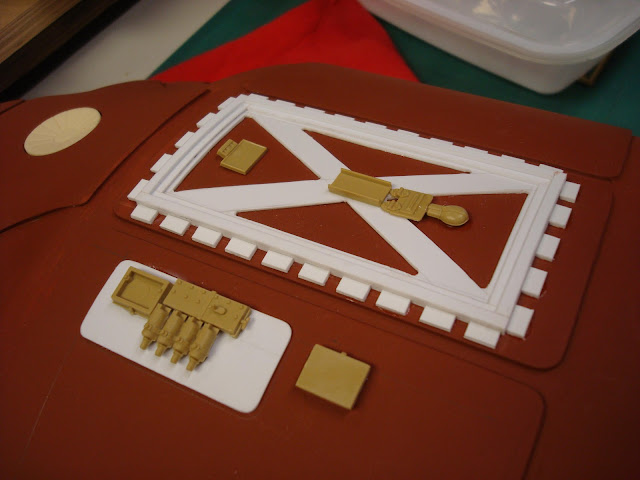 Good grief, how many 8Rads are needed for this thing? I've got one coming my way...... thanks in large part to this thread....

Bit of a noob question here (sorry to interrupt): which Panavise mount have you found to be most useful for mounting models? Looks to me like their CCTV mounts are about the only ones with the 1/4-20 threads. On the other side of things, what do you anchor in the model as the 1/4-20 female portion of the mount? A nut?

I now return you to your regularly scheduled thread... And thanks!

GKvfx said:
Good grief, how many 8Rads are needed for this thing? I've got one coming my way...... thanks in large part to this thread....

I'm very honored to be inspiring, especially around here.
4 kits are needed if you want all original parts. This is due to this part indicated in the attached photo.

Troy Downen said:
Bit of a noob question here (sorry to interrupt): which Panavise mount have you found to be most useful for mounting models? Looks to me like their CCTV mounts are about the only ones with the 1/4-20 threads. On the other side of things, what do you anchor in the model as the 1/4-20 female portion of the mount? A nut?

I now return you to your regularly scheduled thread... And thanks!
Click to expand...

I have the packaging for the insert nuts that I got at Home Depot. I'll post a pic of those when I get home along with the panavise model number I'm using. I got the panavise with the extending arm so I could adjust the height.

I'm using the 883-T mount. It's much sturdier than the smaller size mounts which are fine for smaller plastic models. I attached pics of the insert nut and packaging. You just have to make sure the threads match the panavise mount threads....1/4-20.
Last edited: Nov 9, 2011

Very much appreciated on the Panavise and nut info.

Now, if only I could get one of those SS BSG shuttle models... :cry
G

dbhs said:
I'm very honored to be inspiring, especially around here.
4 kits are needed if you want all original parts. This is due to this part indicated in the attached photo.
Click to expand...

Great. (Well, great for my local hobby store - not for my wallet.) I think I gutted my 8-Rad stash for BSG related builds that use the same parts.

I was able to find a little time to work on this over the weekend. I got the clamp arms installed on the body and scratched the side thrusters. 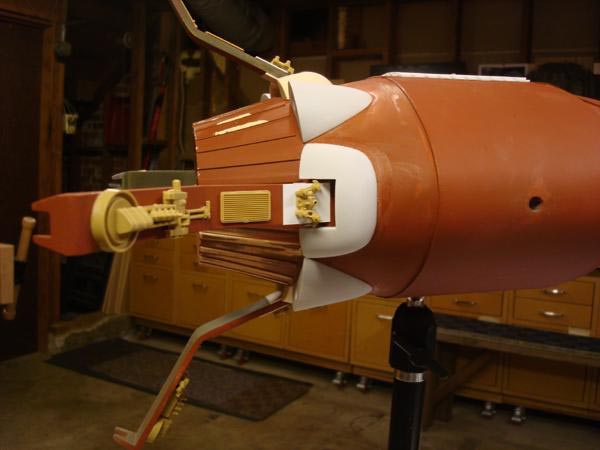 Thruster side blocks and the bells with a photo of the original. Thse will get glued up after painting since masking off these shapes will be a PITA. 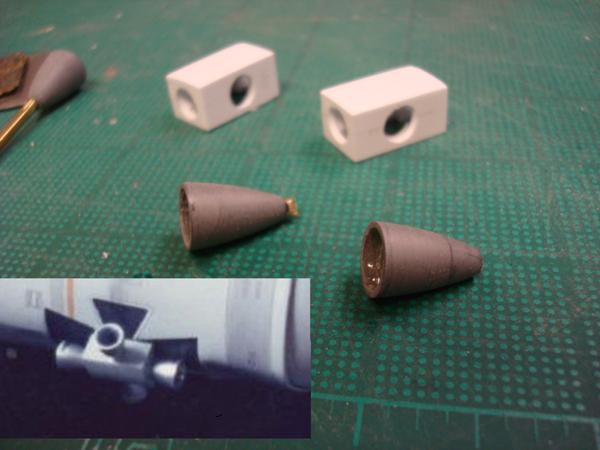 For the bells I found these cheap ball point pens that had removable tips that are nearly an exact match for the size and shape of the original thrusters. I glued them onto brass tubes to make them easier to work with while sanding the wide part down a bit. 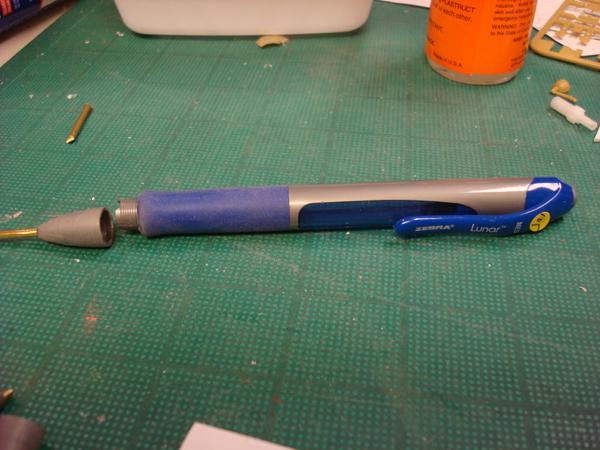 dbhs said:
......For the bells I found these cheap ball point pens that had removable tips that are nearly an exact match for the size and shape of the original thrusters. ........
Click to expand...

Spacehip Pisces from The Starlost (1973) Episode 4

B
jason of star command miniatures