I have recently become enamoured of the Victorian steampunk RPG Space 1889, to the extent it got me thinking about costumes for Halloween, then two and a half weeks away.

I had a moment of madness followed by two feverish weeks of construction in which I actualized the Moran Aetheric Neuralizer and took first prize in a costume contest largely because of the visual impact of the thing. The static image doesn't do it justice. The Moran Aethero-Galvannic Exciter (the wooden box) features a striking "lumen disc" effect and the stopcock really works to open or shut down the power supply to the Moran Aetheric Neuralizer.

Said weapon is also controlled by means of working stopcocks and features the Moran Aetheric Resonator, a visually awesome "weird science" effect achieved by means of a case modder lamp.

The best part is that when asked "does it work?" I pull the trigger and the gun emits a deafening shriek courtesy of a piezo-electric siren.

The build blog is at Colonel Moran's Manufactory, and is a tad disorganized as I wrote it while the feverish build was underway against the clock. I'm now attempting a more detailed and helpful rewrite.

I love watching this thing as green lightning arcs all over it. I'm trying to think of more projects to build in the same vein.

That's pretty cool! I haven't heard of this RPG before, sounds like a cool take on Steampunk.

Not a big Steampunk fan, but your build looks fantastic, well done! The green and gold scheme looks great!

How heavy is it?

The novel The Difference Engine came out in 1990, and is often credited with introducing a wider audience to many of the steampunk concepts. I have seen "pure" steampunk fans get in yelling matches with Space 1889 fans over which came first. Which is (to me) silly -- it's best looked at as a chicken-or-the-egg type thing.

Haven't weighed it (new project idea right there) and it is missing all the surface textural clutter I planned for it, but the gun as it stands is mostly made of PVC pipe fittings. The central structure (aka the Moran Aetheric Resonator) is quite heavy, maybe five pounds or more, because it is essentially three feet of copper pipe cladding two and a half feet of 1/2 inch threaded rod. 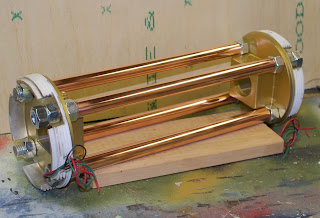 It was supposed to be crystal rods rather than copper pipe over threaded rod (and I have the crystal rods) but I could not for the life of me figure out how to fasten it all together.

The box weighs about three pounds or so, mostly due to the lead-acid battery that is the only way to get the effects to run for hours without embarrassing fizzle-out. I get around 8 hours from a full charge (the lumin disc needs new batteries every four hours).

When slung it is ungainly but not uncomfortably heavy.
Last edited: Jan 3, 2012

The novel The Difference Engine came out in 1990, and is often credited with introducing a wider audience to many of the steampunk concepts. I have seen "pure" steampunk fans get in yelling matches with Space 1889 fans over which came first. Which is (to me) silly -- it's best looked at as a chicken-or-the-egg type thing.
Click to expand...

Thanks. I read the Difference Engine but the whole steampunk thing left me cold as a literature genre. Then I got talked into running the RPG and I was hooked enough to think of building something from the game for real (the gun is my vision of something a player is currently pointing at imaginary people with extreme prejudice).

I'm involved with the new Savage Worlds retread of Space 1889 rather than the original game. Both rulebooks have given me many ideas for props.

robn1 said:
That's pretty cool! I haven't heard of this RPG before, sounds like a cool take on Steampunk.
Click to expand...

Thank you for the kind comment. The game is very cool if you are into that sort of thing.

Which I obviously am.

And I know it sounds like empty boasting but the impact of the thing is totally down to the dynamic visual impact of the lighting effects, all of which were off the shelf items. I am very pleased with the reaction people have when seeing it, which is generally a two minute "wow" followed by "can I have a go?" The owner of the game store in which the photo was taken wants to borrow the gun as a wall display.

A very lucky series of finds that came together mostly as planned and worked well beyond expectation. Case lights, PVC fittings some plumbing odds and ends and a spray paint that truly looks like brass - all the bits cooperated to bring home a win.

And I never saw copper polish up to that color before in all the years I've been handling the stuff. A bit of Tripoli cake and a buffing wheel and I was looking at some strange alien metal - perfect. I used carnuba wax, but the pipe still oxidized very quickly. Maybe glosscote would be better.

Thanks for the positive comments everyone. I wish I could capture the visual effects on camera for you to see, but so far the proper exposure is eluding me and my equipment.