I had a nice surprise Thursday morning when the purolator guy
dropped off my P2 mask from Ta2pro as I was getting ready for work.
Here are a few pics of it taken after arrival, and a few more taken today
after starting in on the dreds.
Obviously not "done" yet, still not sure about the dreds as things stand,
and need to get him quilled up as well...all in good time, I guess.
Anyway, Pics: 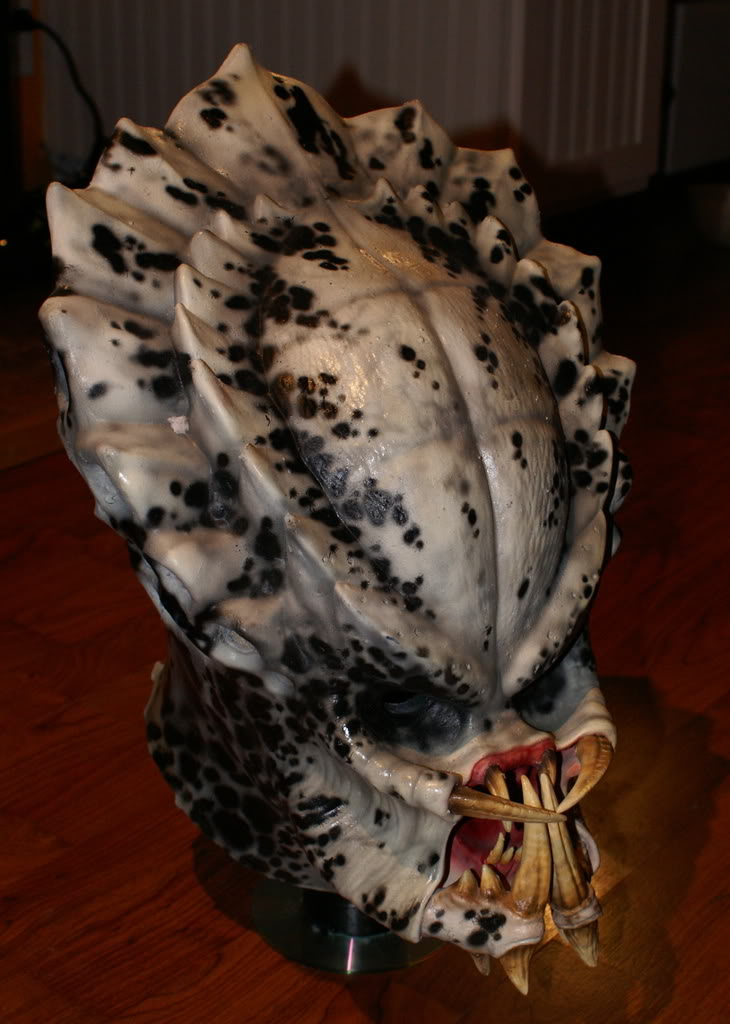 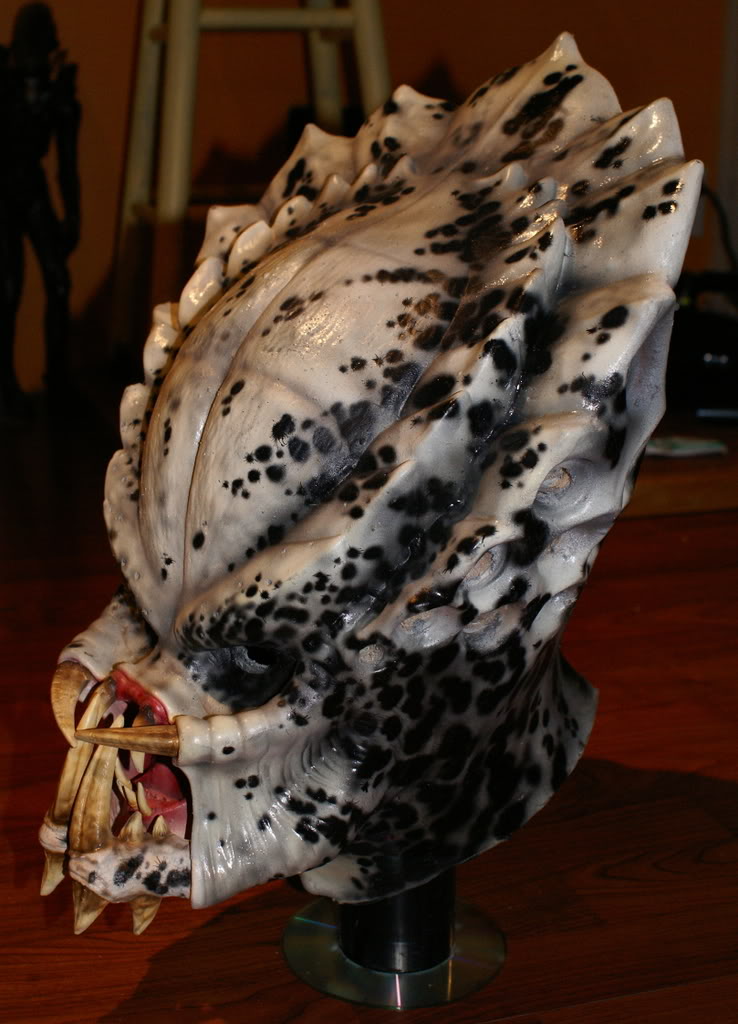 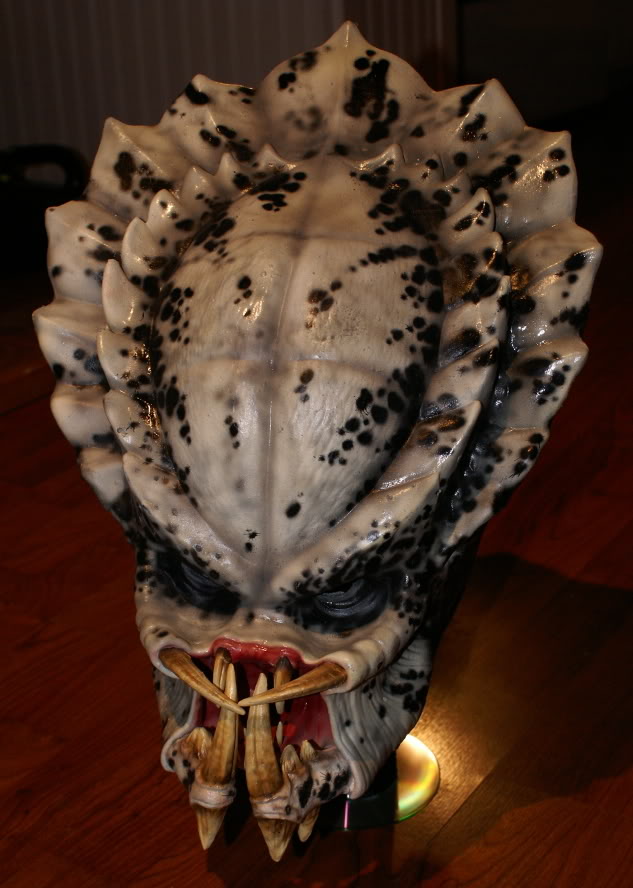 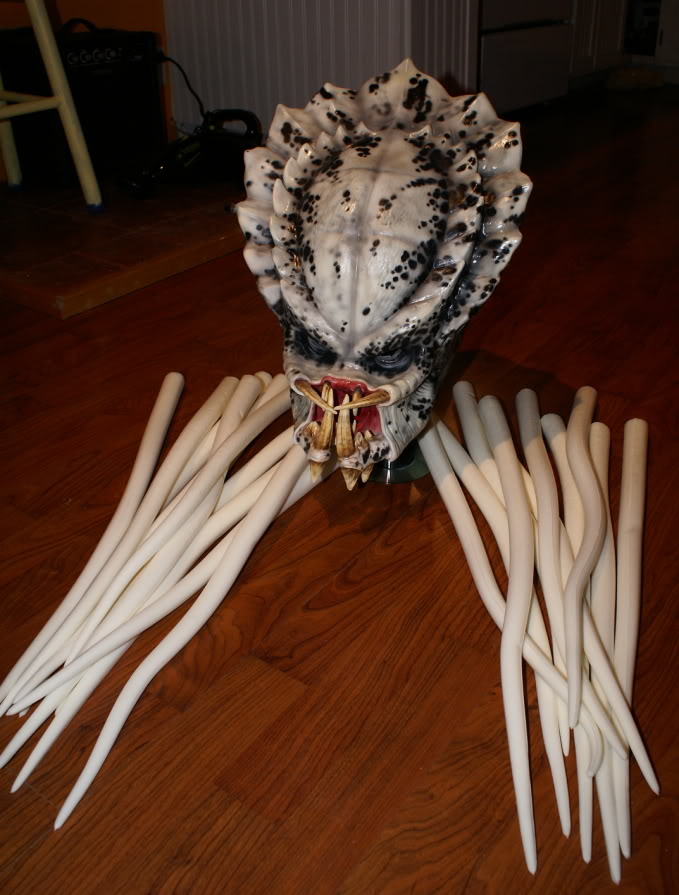 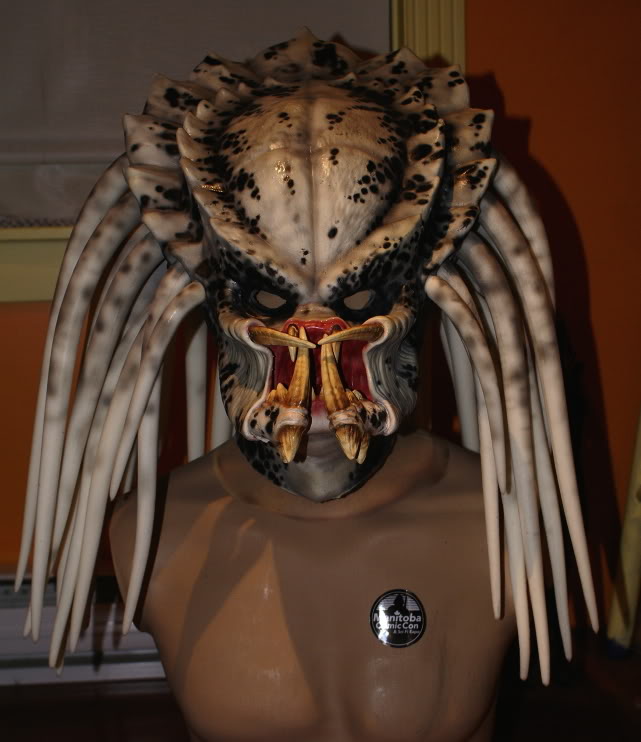 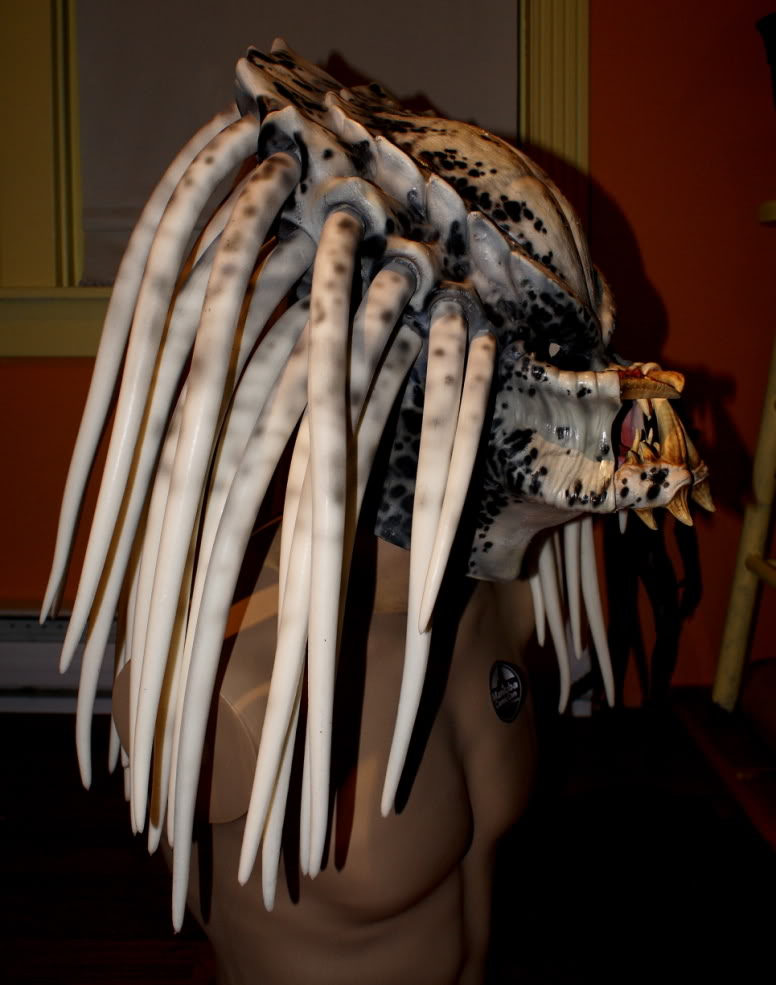 That's as far as I've gotten. I'll post more when I get further along...
Mike

The spots on the dread really work for it. Great job.

looks fantastic, are you doing an entire suit like this?

Excellent! The dreads compliment the mask very well! I love those dirty teeth.

gave me the chills

See, THIS is what I'm talking about. Fox could never come up with anything good on thier own, it takes FANS to do it!!! Color them for their environments, don't force human/earth crap on them. Think about this: if you must use earth examples, take the tiger. Science now believes that the tiger originated in Siberia and spread to warmer climates, not the other way around. So, using this logic, an arctic Predator is possible. The fans should storm Fox studios and take over!!! Hahaha.

THAT is beautiful! Love the paintwork

I agree, the dirty tusks are a nice contrast. Well done!

great mask , but the dreads are kinda lame

kamikazerick said:
great mask , but the dreads are kinda lame
Click to expand...

kamikazerick said:
great mask , but the dreads are kinda lame
Click to expand...

Well, I never claimed to have the paint skills of Joe or TMI. But, you do what you can and that's what I did.
And, to be honest, I'm quite happy with the result. So there ya go.
Mike

Just a small update...I've added some cheap homemade dread rings just to get a sense
of how it'll look with "real" P2 rings....really makes a big difference in the overall look.
The eyes are just those plastic jobs you can order off of ebay, I just threw them in because I get tired of the blank sockets.
It's coming along!
The plan is to do a whole costume build around this mask.
BTW, I think Half Knife really hit it on the head, in the sense that I was thinking
along similar lines when I asked Joe to paint this mask up for me.
Sort of a "Pred meets Zep's "The Immigrant Song"....if you know what I mean 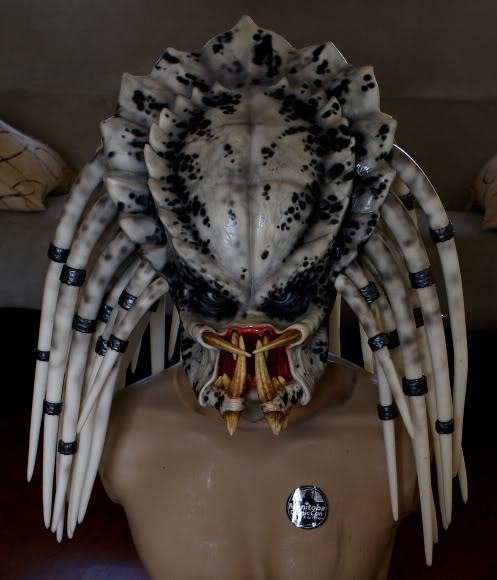 PredaHawk said:
I agree, the dirty tusks are a nice contrast. Well done!
Click to expand...

great looking mask , sometihng a bit different and the dreads work well with it.

Not sure how I felt about a Snow Pred, but gotta say that looks pretty sweet. And as for the person who thought the dreads look lame... Personally, I think they look pretty damn awesome on that mask. Nice job... a full suit looks like an interesting endeavor now that the head turned out that nice.

Thats BADASS.....I think the idea is really cool,different and hasnt been done around here. Killer mask and props to you for a unique pred and sticking with it. Its funny how people are so quick to judge (in a negative manner) around here when they have no talent or never post an idea or pics.

pdisc said:
Its funny how people are so quick to judge (in a negative manner) around here when they have no talent or never post an idea or pics.
Click to expand...

damn! and i thought it looked cool BEFORE the dread rings and eyes! those details really bring it together. i'm looking forward to seeing this suit come to life

Looks awesome! I love the black rings on the white dreads. Actually, I love everything about it!

Thursday at 6:19 AM
Analyzer