I am sure you guys will notice the blatant discrepancies in the suit - namely in the gauntlets, which I had to make fast - however, for a 2-day job, a Rubies Mask and nothing else, I think I did pretty well.

Every single part of the suit - boots, gloves, gauntlets, belt, bodysuit, cape, everything except the cowl, and even then, I added quite the weave of rubber underneath it, was made from scratch, with as many as 4 different kinds of rubber, the right beehive pattern and hopefully a good enough synthetic leather cape. The only problem with the pictures is that I´ve done it for someone 6´and the guy in the suit is 6´6.... oh, well, I gots to make do.

Wow. For a 2 day job and that you made everything from scratch...this is epic! Great suit.
H

Thanks, Orka! I´m enclosing with this post a new picture, taken in a studio Hopefully this one shows it off better 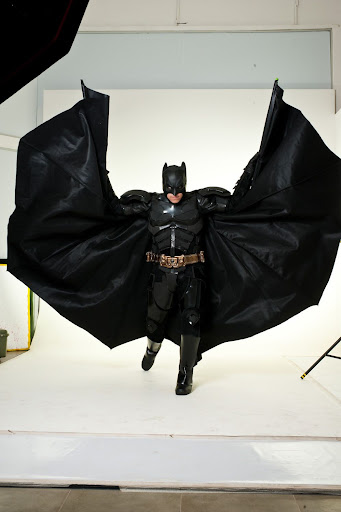 Remarkable! How much did it cost you in all?

That looks great, I can't believe it was done in 2 days!

OK, so let´s do it like this - Ask me anything about it and I´ll respond with as much candor as possible, so you guys can make them as well! Since Mosarmini posed the first question, here goes - In materials (NOT counting the Rubies mask, that I had laying around for quite a while), it was about 400-ish dollars.

I can give you guys a step-by-step if you guys wish, of how I´ve done it Without pictures, for silly me, I didn´t stop to take them, and I worked alone on that, so I didn´t even think of stopping...

RPF PREMIUM MEMBER
As usual, you have done an awesome job Hermes!

Now, if I can just afford some of your Jedi services. :lol

How much to have you make one for me? $405 + $10 shipping? Alright sounds good and I expect it in three days! (The extra day is for shipping, your welcome)...
Now candor me! And howd you make the boots?
H

Anyway, about the boots, I did the usual thing - When it comes to making boots such as these or Jedi Knight Boots, I go to my trusty tool store and buy construction boots. They used to be rough, but nowadays, they´re very similar - sole-wise, that is - to the Batman Boots, and they look nifty when I transform them into anything.

So, I got the boots, and after cutting them to make them readily usable without the shoelaces, I added the long part that goes up the legs, out of a material that hopefully you can see it´s very similar to the used in the movie. Then, after having it so extended, I added the harder parts, and the detail parts. It is really not a hard process, the problem is to get the result you need with all of the detail coming out at first glance AND it STILL being flexible and usable. I mean, the guy´s freaking Batman, he´s not a Greek Statue, so I take extra care when making such a suit, so it ´s always proper to the character.

The boots themselves took me a total of 3 hours from beginning to end, and luckily they worked right from the start, for this would delay me and I could bust the deadline, which is something I don´t like to do.

And Chuck, buddy, let´s work on something, my friend! It´s great to see you around!!

Wow nice suit man, if you start doing them for commission tell me please
H

Consider yourself told, then
H

I found a detail picture of it, you will be able to see the beehive fabric I used and the layers of rubber, different kinds, so hopefully this will give you guys more insight on how it´s done

Plus, if anyone wishes me to make it, I have nearly unlimited access to that same fabric, those same kinds of rubber, and I would love to see more bat-suits of mine floating around

Wow,that studio shot is very very professional. If you didn't write a description i would of though it was from Dark Knight or something i'm not just saying that. It looks epic!

To see what you've made in 2 days and seeing at how awesome it looks has seriously inspired me to work my socks of on my recon suit.

Thank you very much, Orka It is I who will be delighted to see your Recon Suit, for I´ll feel somewhat responsible for it now

And should you wish to see some PAST works.... check this out - https://picasaweb.google.com/hermesiii/UmPoucoDoQueJaFiz#