RPF PREMIUM MEMBER
OK, so I just started watching season 2 (I know, I know!) and there is something that makes me so damn angry that I have to say something.

WHY ARE YOU STILL DRIVING THAT P.O.S. THAT YOU KNOW WILL BREAK DOWN?

Go find a new one, start it up and drive away.

Are you telling me there isn't a camper and RV dealer nearby?

It's the flipping south! They are everywhere!

And why they all dont have new trucks is beyond me.

So, just started season 2 episode 1 and, of course, the winny just pops smoke going through the accident scene.

these people are too stupid to survive.

I just hope carl stays in the house. I will be ok if that happens.

adamata said:
I just hope carl stays in the house. I will be ok if that happens.
Click to expand...

Get in the house Carl! 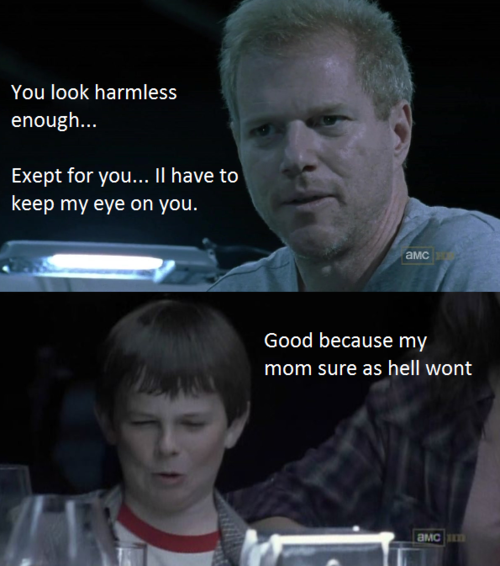 Yeah plenty of things to gripe about on this show. The least of my concerns is which vehicle they choose to use.
What would you choose? A Delorean?

He kept it mostly for sentimental reasons, also it's got a lot of internal space to store stuff and move around in. You can't exactly walk from the inside front of your SUV to the back of your SUV. Also, they do pickup additional vehicles in Season 2. In Season 1 they were being very conservative because they had almost no guns and ammo.

Among many things discussed in the 2nd season thread.

I think you answered your own question there, it's the flipping south. :lol Some of us treat our trucks like our first born. Remember when Hank Hill's Ranger from King of the Hill got demolished? same sentiment.
Last edited: Apr 10, 2012

First thing I would do if I found myself in the world of the "Walking Dead", is to build a bad A$$ RV with metal shutters, wheel covers, Extra Gas tanks, etc... I like watching the show and all, but it does aggregate me that it has so many faults. Maybe they couldn’t make it as dramatic if everything was thought through and had a plan.

jamiemcshan said:
Maybe they couldn’t make it as dramatic if everything was thought through and had a plan.
Click to expand...

They could if they stuck to the damn comics instead of making up new storylines.

jamiemcshan said:
First thing I would do if I found myself in the world of the "Walking Dead", is to build a bad A$$ RV with metal shutters, wheel covers, Extra Gas tanks, etc... I like watching the show and all, but it does aggregate me that it has so many faults. Maybe they couldn’t make it as dramatic if everything was thought through and had a plan.
Click to expand...

'Aggravate'. Not 'aggregate', which is also a real word, but means something completely different.
W

it's because he can fix if it breaks down, he has spare parts for it and also can get spare parts easily from other vehicles.

It's also his comfort zone

The Winnebago worked out just fine for Lonestar and Barf in Spaceballs, so why not?

Actually, it makes perfect sense if you think about it.

Human beings are as much nestors as much as many species. Most seem to have a desire for home. Home is not necessarily a house. It can be a country, a town a place, an apartment or even just items that are taken with traveling. I've never understood the need for people to stay in the most desolate or dangerous of places and even defend them (deserts, jungles, etc.). Yet to them it's their home.

It's really no different than Hershel clinging to his farm, even if it isn't the safest place.

Dale is a romantic... not romantic in that he enjoys flowers or candy, but he has a romanticism with the past... the way things were before everything happened. To him, he used to travel in that hot, ugly thing before everything happened. To him, it represents a better time (he doesn't like what the world has become). To him it's become his home and given him shelter. He may have been taking trips with his wife in it, years ago. So it also represents happy memories.

It's his comfort zone.

What about that place that you feel comfortable? ... that house, apartment, mancave, or just a room? There's still a level of comfort there. It's like being a baby and being held in your mother's arms.

...maybe that's what we attempt to recapture when creating a nest for ourselves... that comfort of the womb again.

Linus's blanket was also a ratty, hideous and ridiculous thing... but it made him feel safe.

Besides that- it's safer than a tent, offers a place to sleep, eat, store supplies, stand guard... It's a house on wheels! So that's better than sitting in a house (if any minute hoards of hungry zombies could attack said house). You've got a better chance of getting away in a Winnebago than you do a house

adamata, get in the van.

adamata said:
WHY ARE YOU STILL DRIVING THAT P.O.S. THAT YOU KNOW WILL BREAK DOWN?
Click to expand...

Simple answer: The RV belongs to Dale and his deceased wife. According to the comics (some which transfered over to the show), Dale and his wife, Erma, used to travel in the RV (in the comics, she was a victim in the early days of the zombie apocalypse, while in the show, she died of cancer). The reason why the RV is still in use is because it belongs to Dale. It is the last thing he has that ties him to the world before the Walkers, much like how Rick donned his sheriff's outfit just prior to heading to Atlanta. Basically, they are pieces of their past that they choose to keep up with. For Dale, that RV is the last thing he has since his wife passed. I'm sure you have things that are valuable to you, and I don't mean price wise, I mean emotional value. How would you feel to give something that you have an emotional attachment to when everything else you had was already long gone? Before you say BS, I want you to look on the side of the RV. You'll see that Dale and his wife's name are on the side of it. That RV is important to Dale. In the comics, the RV doesn't break down in the first two volumes like it's shown in the show. In fact, I'm about to make reference to how the RV was useful in the comic with your next question.


And why they all dont have new trucks is beyond me.
Click to expand...

Simple answer: Limited gas supply for all the vehicles. That's why you see them abandoning most of them in the opening episode of Season 2, including Daryl abandoning the truck he was driving to switch to the Chopper he had tied down in the bed of the truck. In the comics, the start of Volume 2, they leave the Atlanta camp site by syphoning the fuel from all of the vehicles they had, putting it all into the tank of the RV, everyone packing up into the RV and taking off. It's easier to have a large amount of fuel for one/two/three vehicles than it is to have a large amount that you have to split between ten/eleven/twelve vehicles (the more vehicles, the less amount each vehicle would get). It's no different than the old portion equations from math, only with cars.

Kerr Avon said:
They could if they stuck to the damn comics instead of making up new storylines.
Click to expand...

That's not going to happen, the TV show has it's own story to tell.

The RV can hold the most supplies out of all the vehicles. I mean look at all the water jugs they found in the season 2 premier, if they were all driving regular vehicles, they wouldn't be taking much. Now imagine how muc water sales RV could store. Also they don't know how often they'll come across gas. If one of the vehicles runs dry and they have to grab all their supplies plus people and stick them other vehicles? Chances are stuff is getting left behind whereas dale can open the door to his RV and go "we got vacancy's here".

That RV was a joke and there is no defending it in reality regardless of the comic lovers fetish for it. It broke down constantly, is a fuel hog and as seen in the last episode, cant even stop a couple walkers from bashing the door in. It was almost as irritating as the Dale character himself. That RV gets about 8-12mpg and that giant Suburban isnt too far ahead of that. Shane had it right with the product placement Hyundai mini SUV when he abandoned the Jeep. Modern vehicles have reliability, fuel economy and other plus points to keep them on the "why dont they..." reality list.

On an art dept/production viewpoint older vehicles have personality and character. Modern vehicles are clones of each other. Take badges and name plates off 99% of modern vehicles and swap them between each other and see if anyone notices. Using old vehicles also gives excuses to break down/run out of fuel at the right moments called for in the script. It is after all very convenient the Suburban ran out of fuel within earshot of the prison that Hershel and the "Ive lived my life on this farm" crew dont seem to know about.

Im surprised you didnt catch onto the magical healing ability everyone seems to have. On a side note, I cant wait to see Carl wander around the prison. That boy aint right as it is.

RPF PREMIUM MEMBER
oh, I agree with owning a camper. no argument there and why would ANYONE sleep in a friggin' TENT!

That's like pretending you are a double cheeseburger waiting to be eaten by the first walker that gets by the fence. Just a flimsy wrapper to get past in order to get to the meat inside

I would get a smaller sized camper too, beef it up, stronger door, big bumper for ramming stuff. extra fuel cans, open a hatch in the roof, etc. its not like you have a full time job to go to anymore where you dont have *time* to work on your friggin survival!

But for the love of God, get a NEW one. Memories, shmemories Dale!

what good are they when you are being eaten alive because the radiator hose broke again and you are surrounded by a herd?

(and I have read the comics, btw, at least up to issue 12 or so, long before the show came out)

and dont give me that "no fuel" business. all i see are abandoned cars everywhere. stop during the day, scan for walkers and drain the tanks every chance you get. Once again, nothing better to do. Not like you have to get to the gym in 26 minutes, right?

Lit up light a damn football stadium at night. If a flare thrown into a parking lot can attract a group, why hasn't this place been overrun yet?