RPF PREMIUM MEMBER
Hello RPF folks.
This year i have had a Hasbro Slave 1 given to me for crimbo.
Im not usually a fan of Hasbro stuff, as its normally a bit too "Janky" for me as I normally do studio scale replicas.
But i was blown away with the nice moulding and the pretty good size. So once i had checked it over and decided to do a refit i checked the many threads where other builders had done similar things to this model. They were highly enlightening and i decided it was worth the time and effort.

So, to start with my main bug bear was the underside. Its much better than the older hasbro Slave 1's but fall wayyyy short of being acceptable to me.
I removed the lower details, dead easy as its all one moulded part, made a base plate in 2mm plasticard to work to, as i am wanting to cast all the parts for a friend who would like to do the same thing.
So i started with the tricky bits which i couldn't replicate in greeblies, ie engines and radar dish. I turned them down on a lathe in resin and made them fit the moulded underside of the toy.I raided my old kit stash and used some ATAT parts from the old revell kit as well as a load of other bits which have the same feel as the original greeblies and kitbashed and scratch built as much as i could. 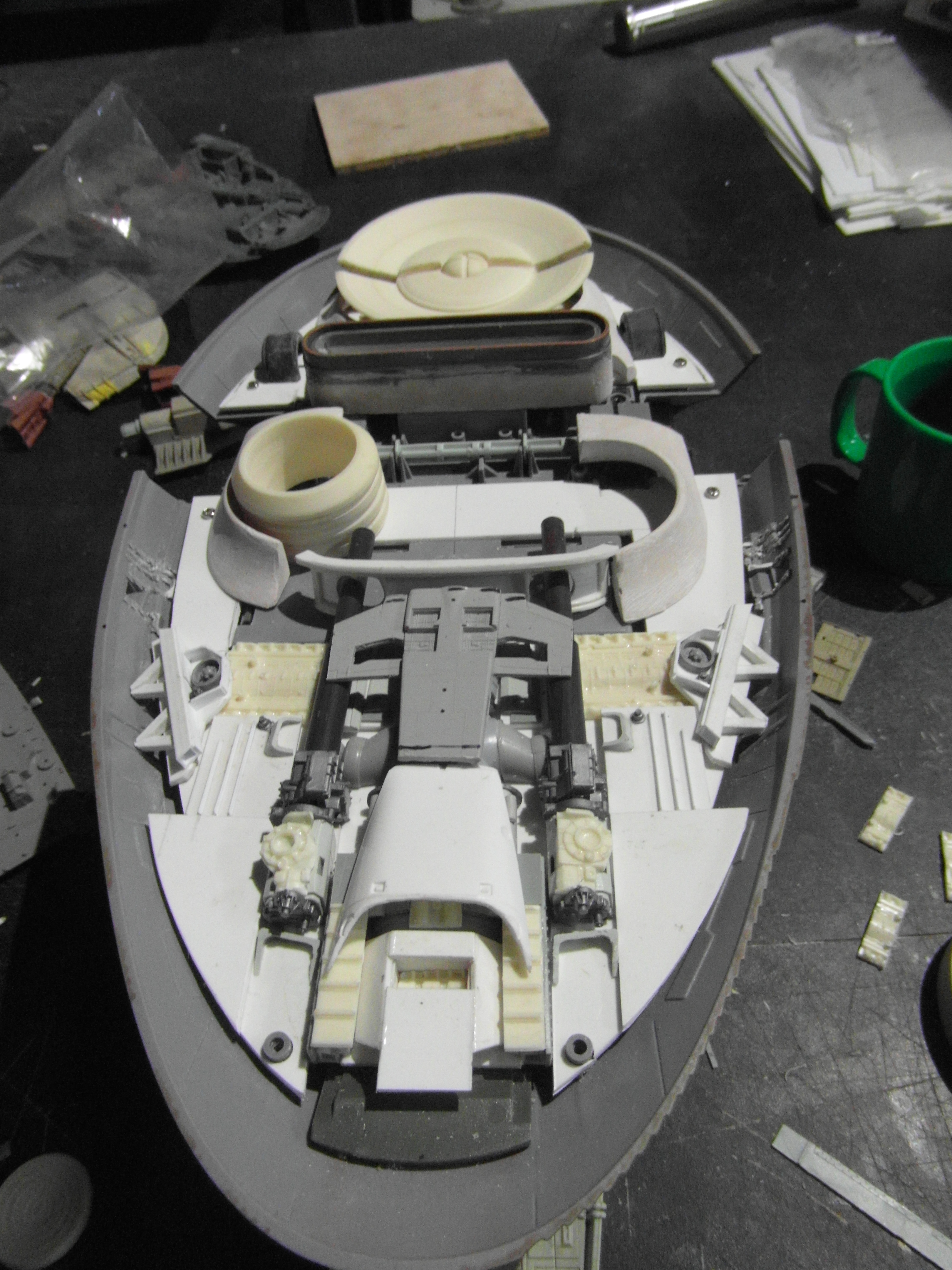 I purchased a Ferrari to give me the engine details. They are a little small as the scale of this toy makes it very tricky to get the correct sized greeblies. After checking some other kits out it became clear that this wasnt going to be accurate by any stretch of the imagination, but to me thats ok for this.

I then got hold of a 1/15 scale porsche rsr, but that was a fraction too small as well. So i increased the size by layering filler onto the body and sanding back to make enlarged versions of the fenders. These fit nicely now. 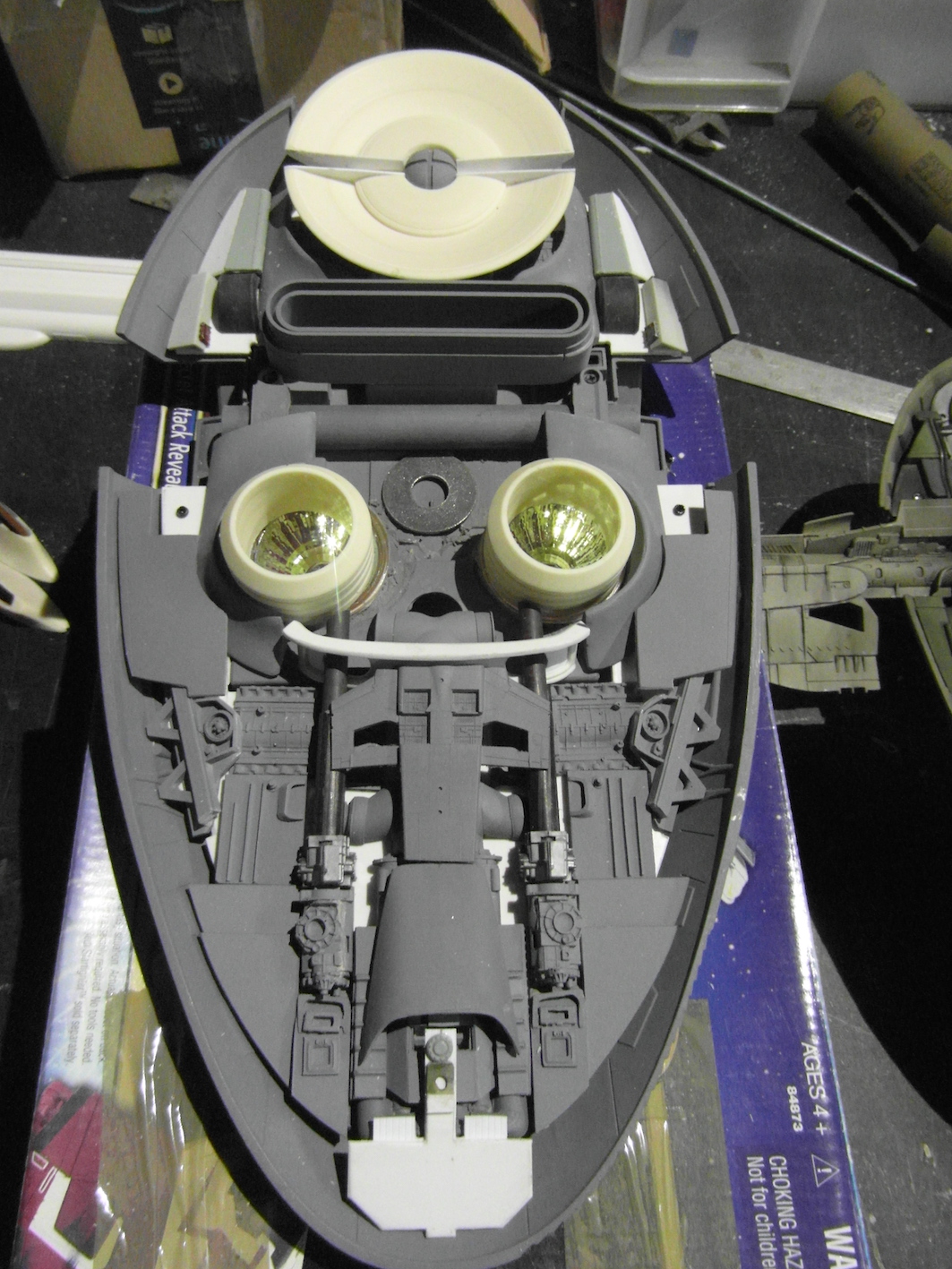 I didn't really like the engines without the signature reflectors in there, so i drilled out the body and inserted some halogen bulbs in there. Also didn't like the main pipes, so i bought the railway gun to get the parts and they are still far to big. so i resorted to making moulds of the wing supports (the same parts) and duplicating them as the main underside pipes. Pics to come.

Also i started on the main body, gluing in place the main doors and filling all the gaps. Completely filing off the details on the sides and replicating the small panels in plasticard. I cut the nose/ skirt section off the removable "door" and added it to the main skirt so i can fill and sand it into perfect finish (no seams hopefully ;-). 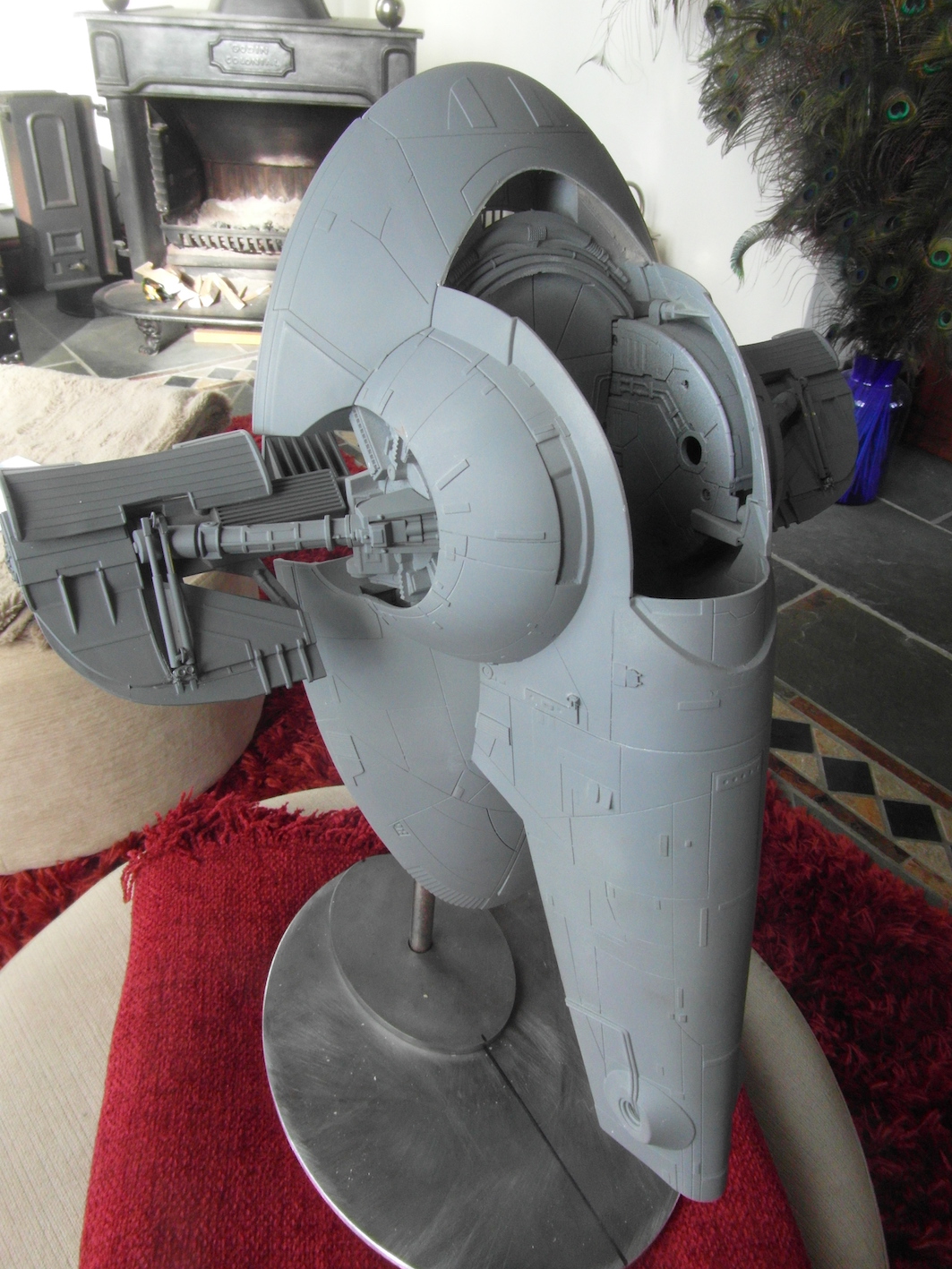 So heres where i am now. Just about to make some moulds of the main greeblies, and finalise the smaller details before i get to assembling it. 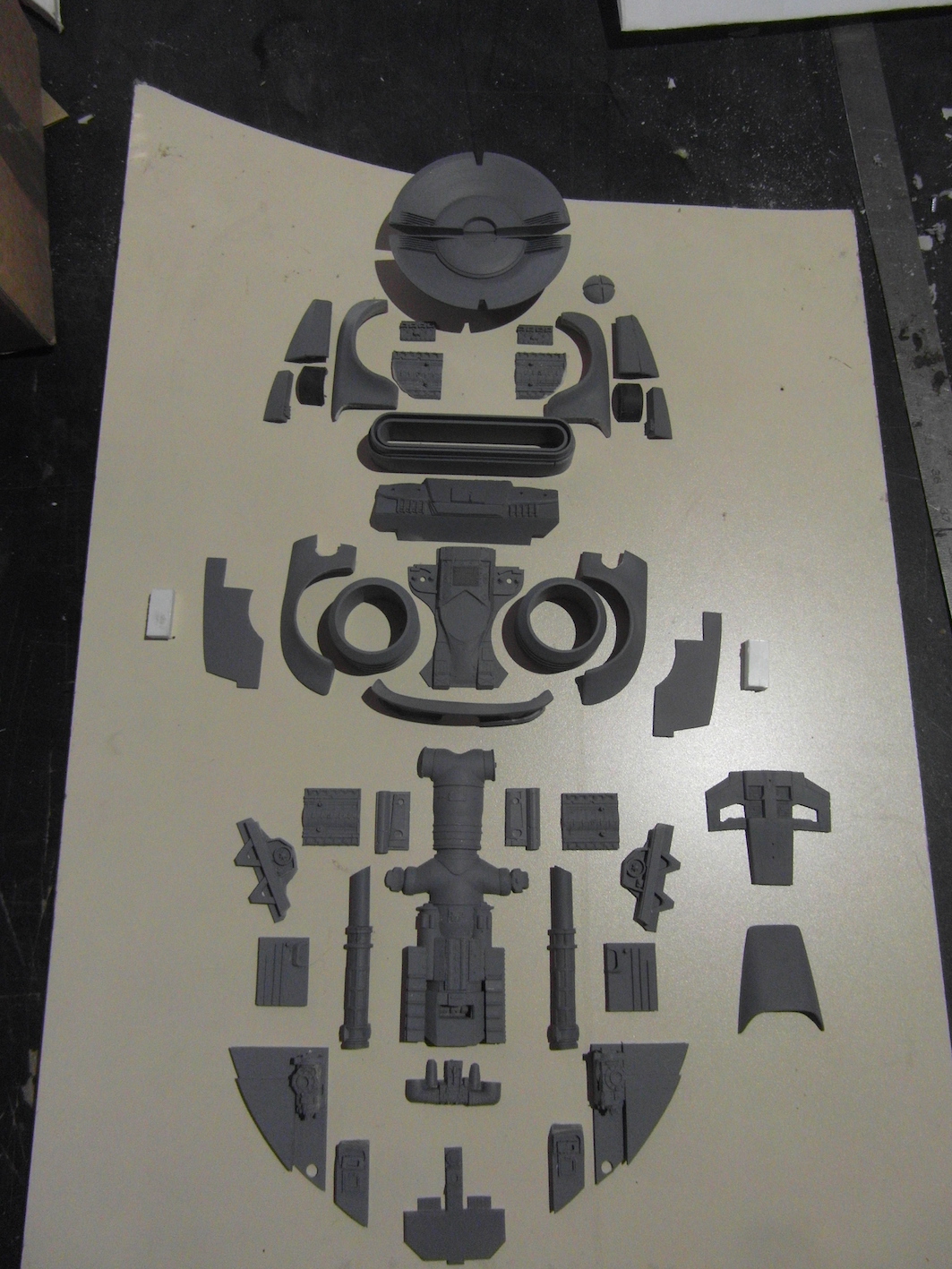 heres how they all fit onto the base plate. The parts are just placed on there in this image, so not aligned as much as they will be on completion. 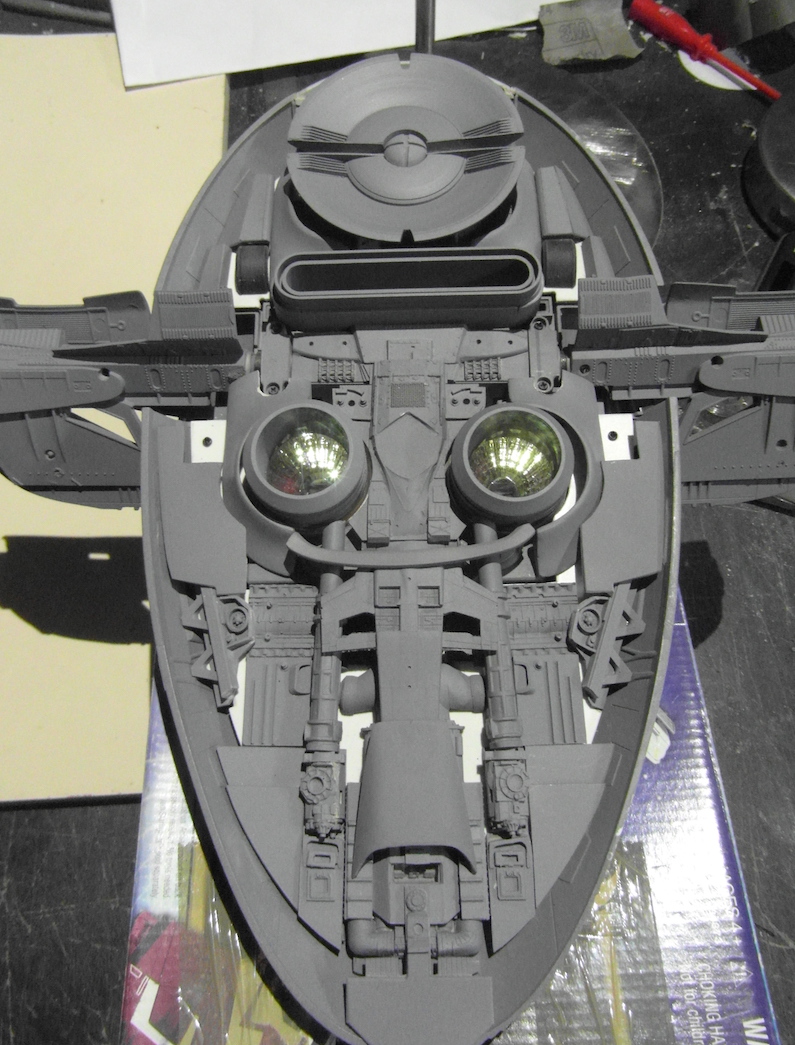 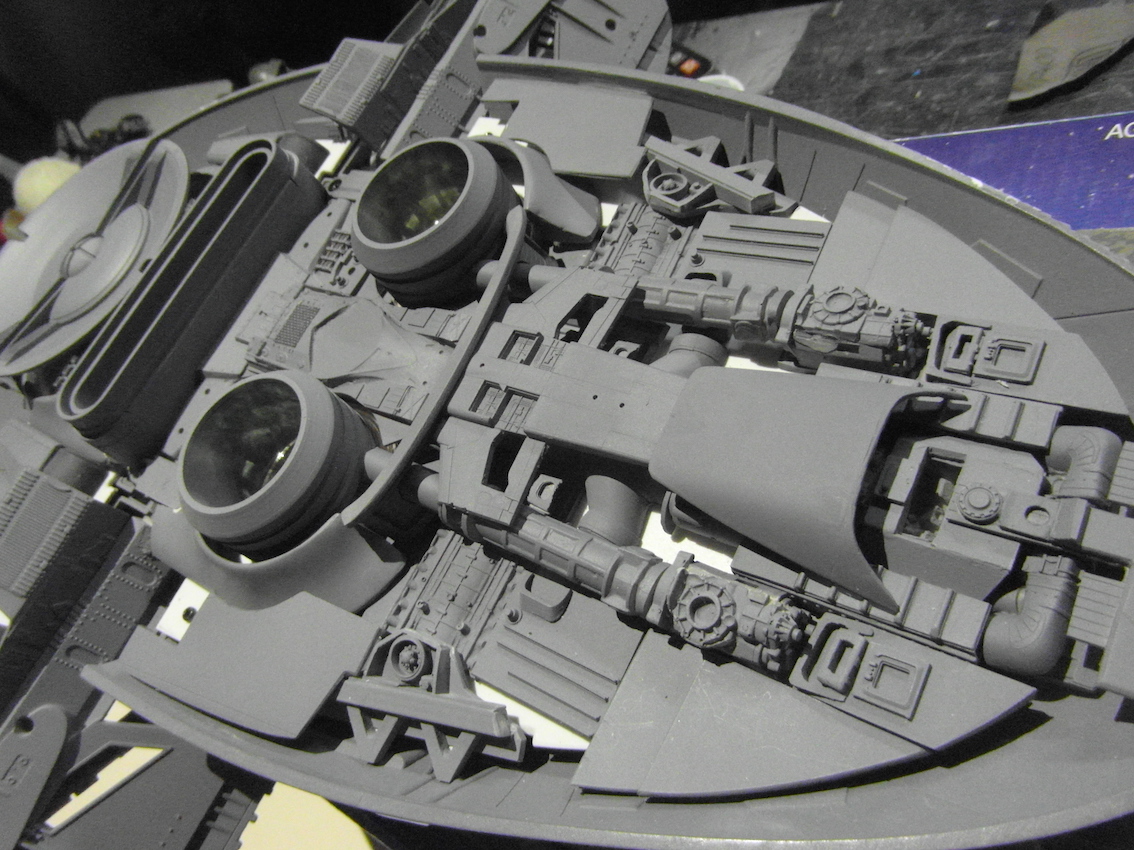 still more detail to add to many of the parts obviously !!

Hope you like it, theres a lot more to do, but i think as a hasbro toy, its one of the better ones available.

RPF PREMIUM MEMBER
Wow! Fantastic job! Thought I was looking at the actual miniature for a second. How big is it?

Love what you are doing!

I've always wanted one of these but prices are ridiculous

If I am not mistaken, I believe it scales out to around 1/48 scale

RPF PREMIUM MEMBER
Cheers dudes. Its looking a lot better now, after another day making details.
The thing itself is 19 inches long 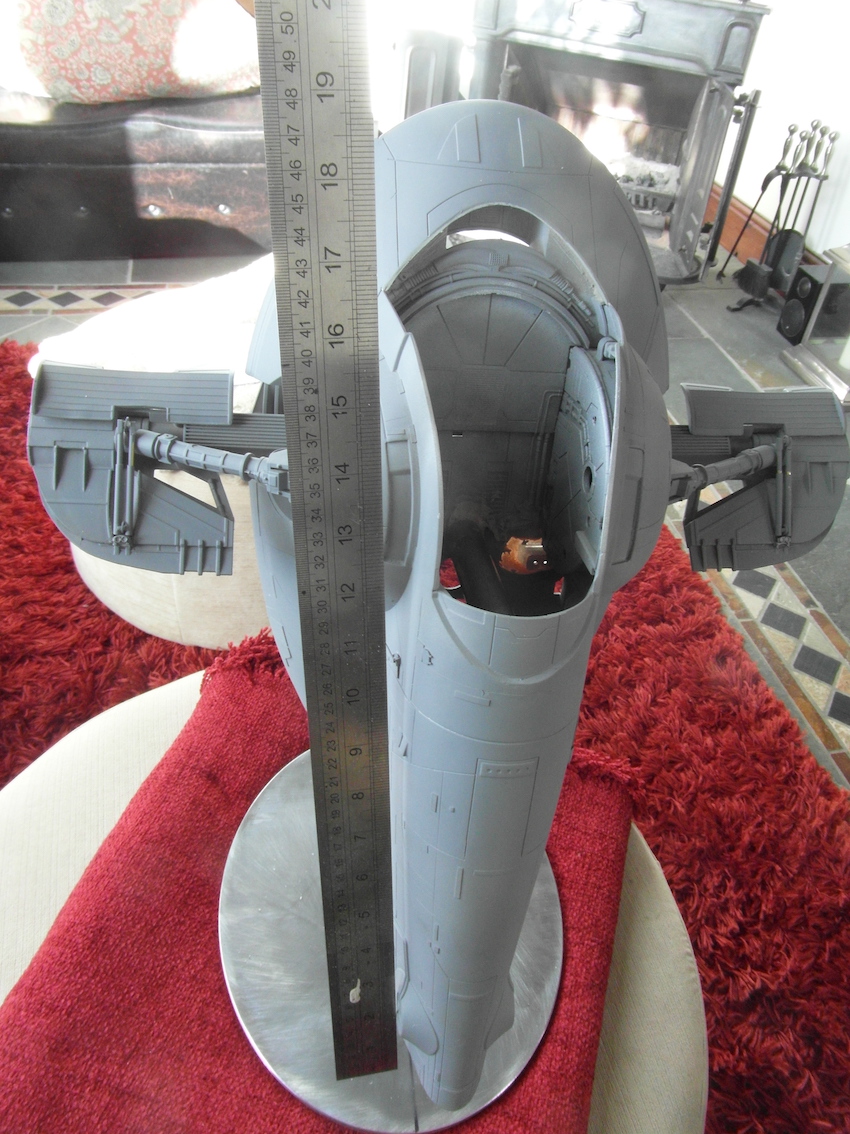 Prices seem reasonable to me for this one. 200 bucks gets this vintage collection version.With a bit of modding its pretty nice, even amongst the SS scale models i have its size works really well. 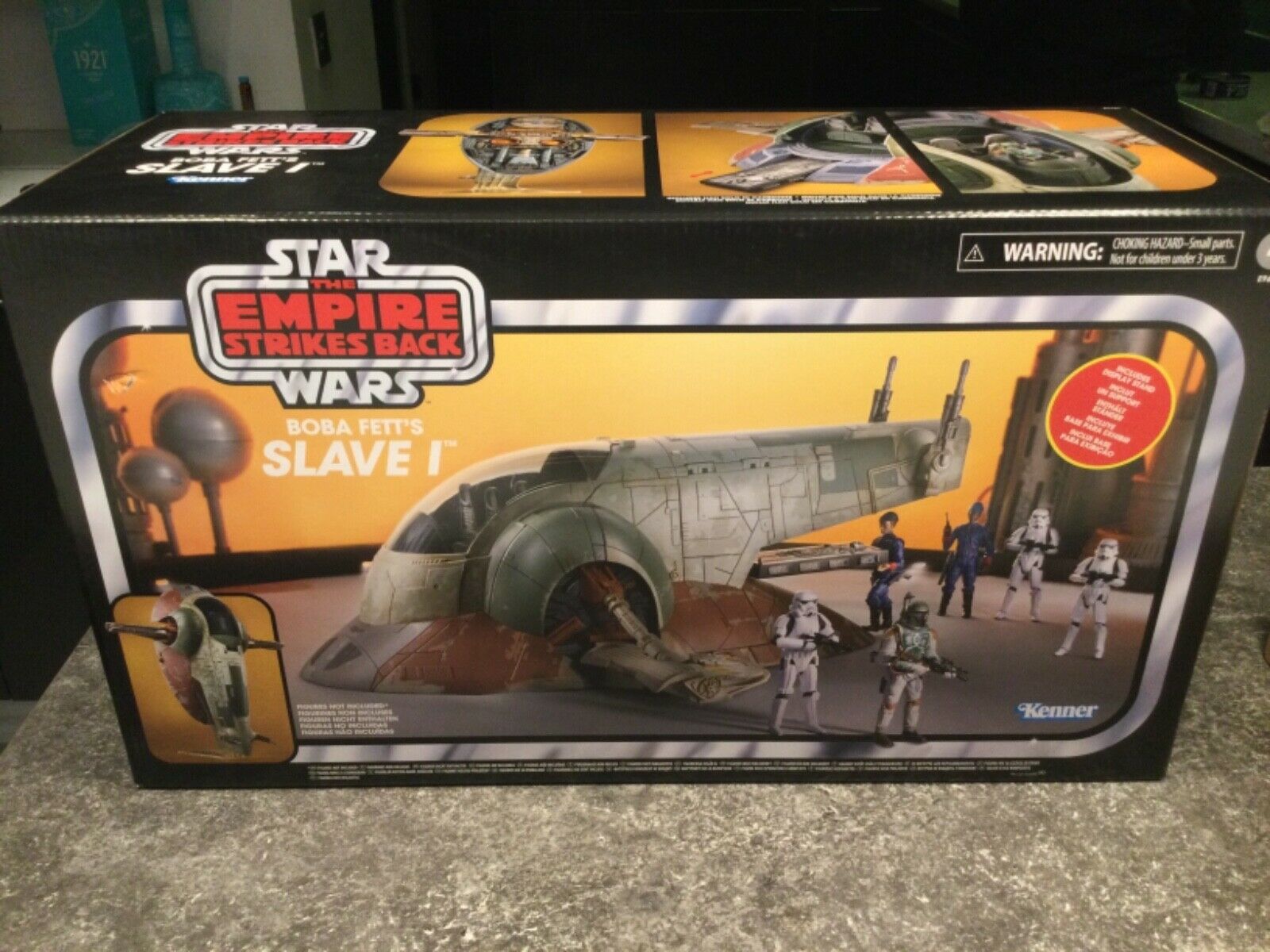 Im not sure of the scale on this, i know captaincox did a lot on this particular toy mod a while back and there was much discussion about the scale if i remember right

Well, if you don't like it you can send it to me (I'll pay UPS;)) Seriously, in terms of toy conversion, this one kicks some serious behind. Great pics and great vid!

www.therpf.com
is was the thread which convinced me to get on with it . Cheers Captain

I really would like to purchase a complete Parts set from you when available.

I really would like to purchase a complete Parts set from you when available.
Click to expand...

Will do Barney five.

If anyone would like one of these bottom detail refit kits once ive finished, I have posted an interest thread just here

Hi folks. Please find the new revised wish list for anyone wanting one of these replacement kits. Thank to everyone who has had one of these over the last year or so. If you would like one of these kits, please post on the thread and i will add you to this NEW "THE 2021 LIST" below. Thanks...

www.therpf.com
I will start a list, just add to the thread if you fancy one.
Cheers folks.

RPF PREMIUM MEMBER
Another few hours on the lower details today. Far too cold for clients work, but ill take the chance on my own stuff.

Its coming on now. Almost ready to get the silicone out (once its warmed up a little in the workshop). 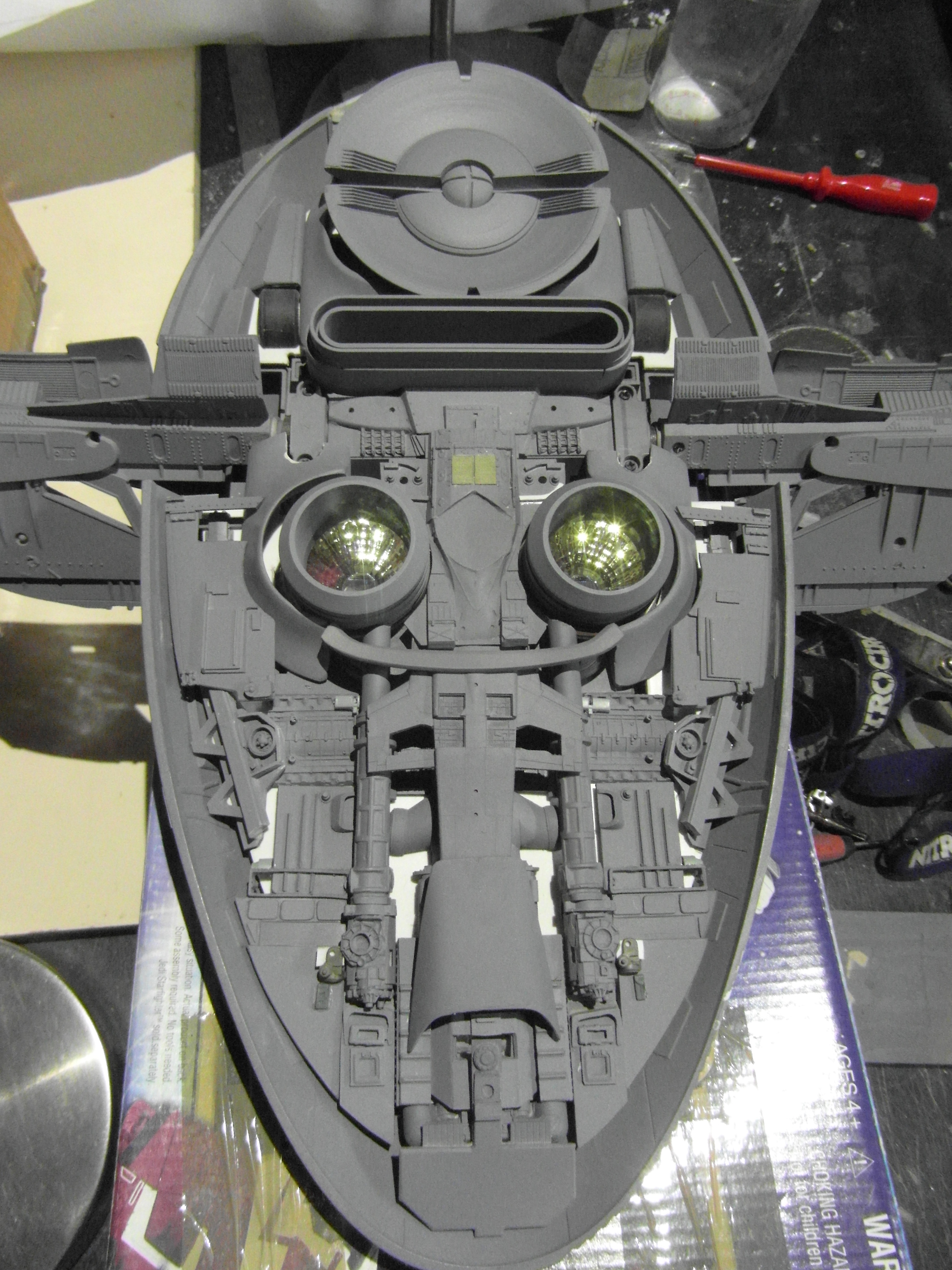 The fine greeblies such as gun barrels and pipes will be attacked once the main parts are fitted permanently to the baseplate. 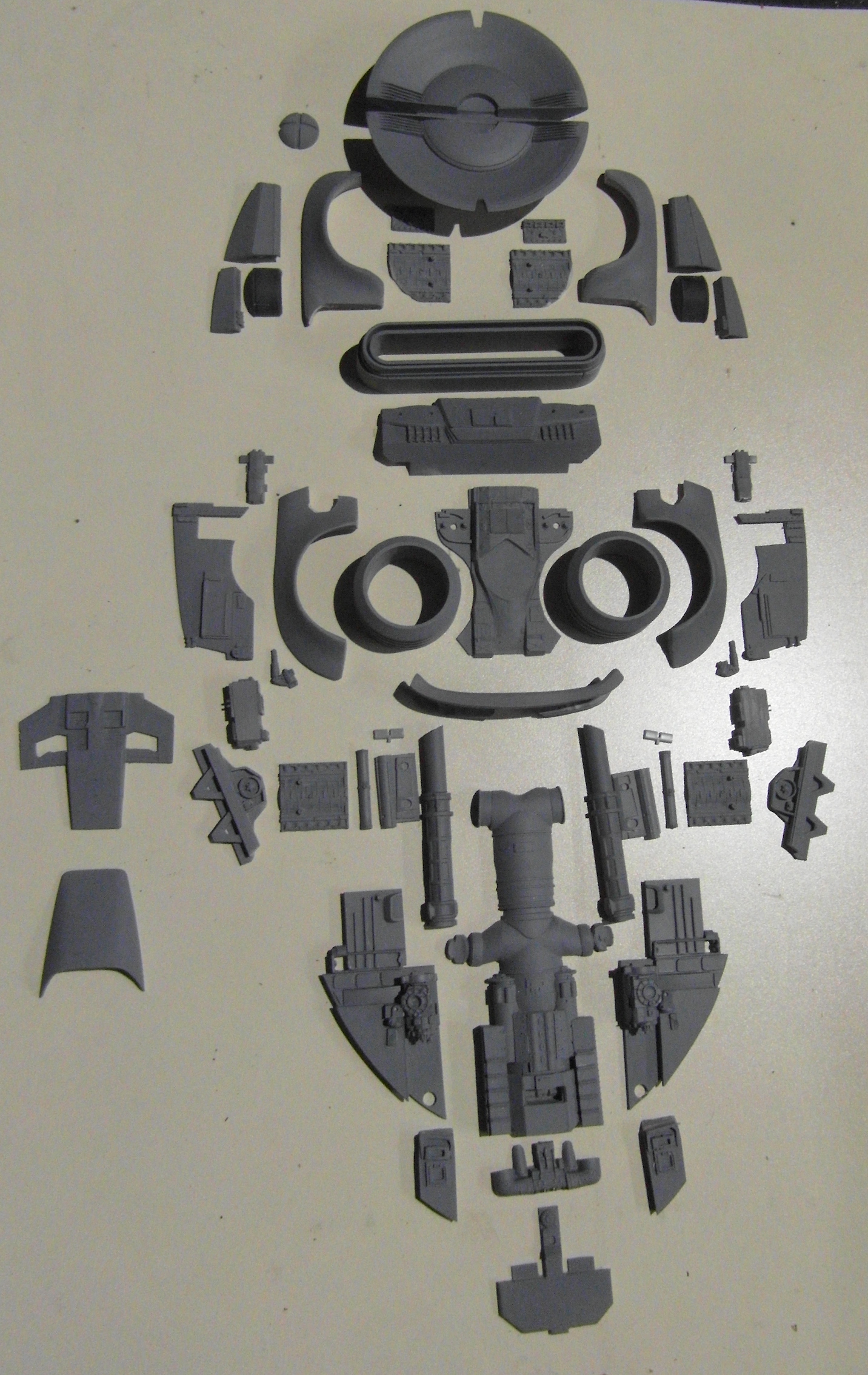 Really looking forward to seeing it all together in paint!

RPF PREMIUM MEMBER
Following this! Can’t wait to see what you all you do with it!

Great stuff already...waiting for your next update!!

RPF PREMIUM MEMBER
So, the main parts are done and prepared for moulding. Ive nested them into their boxes so i can manipulate each pour with the casting resin as needed. 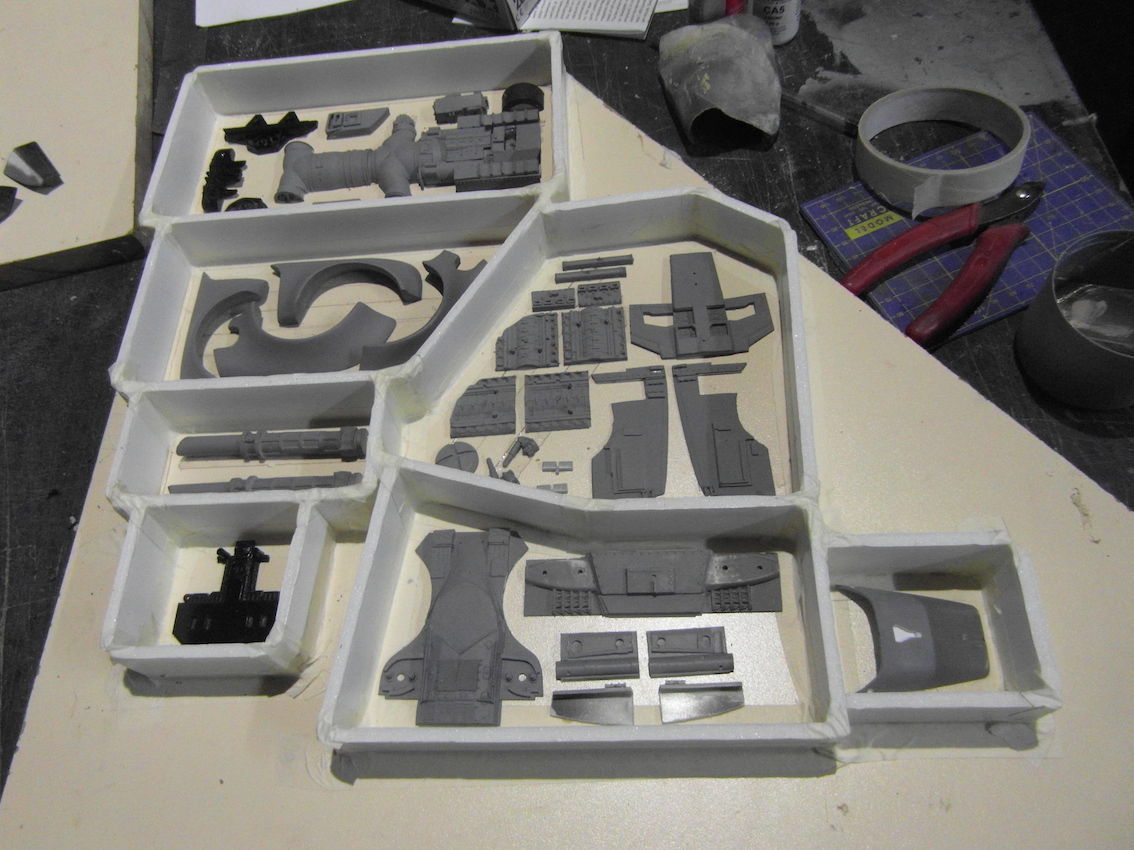 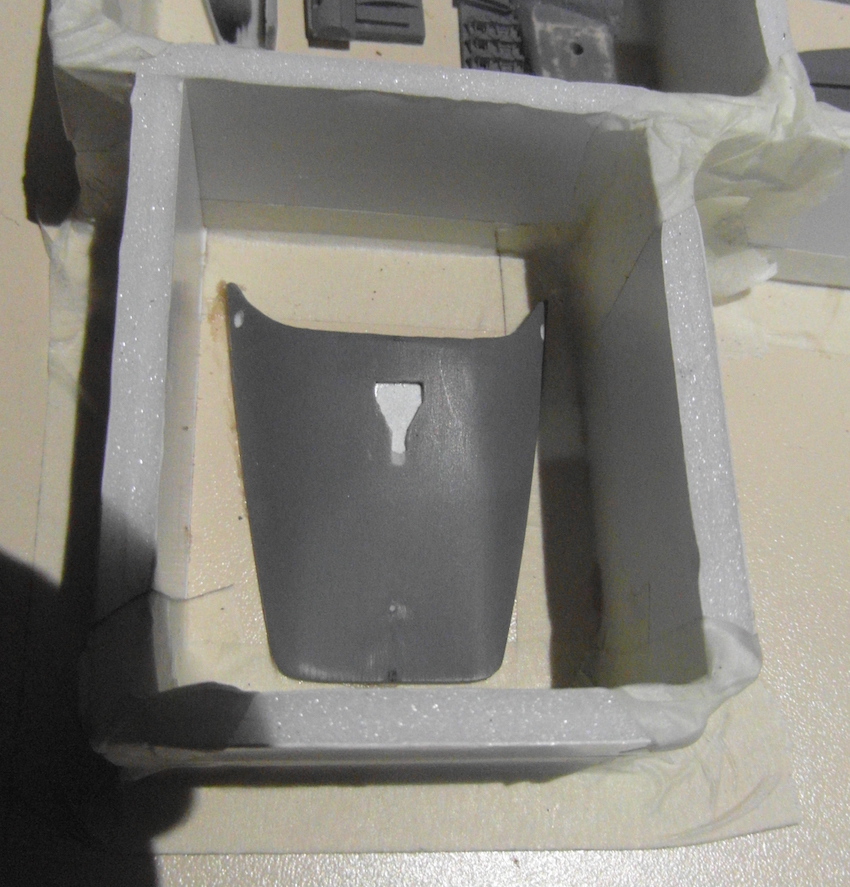 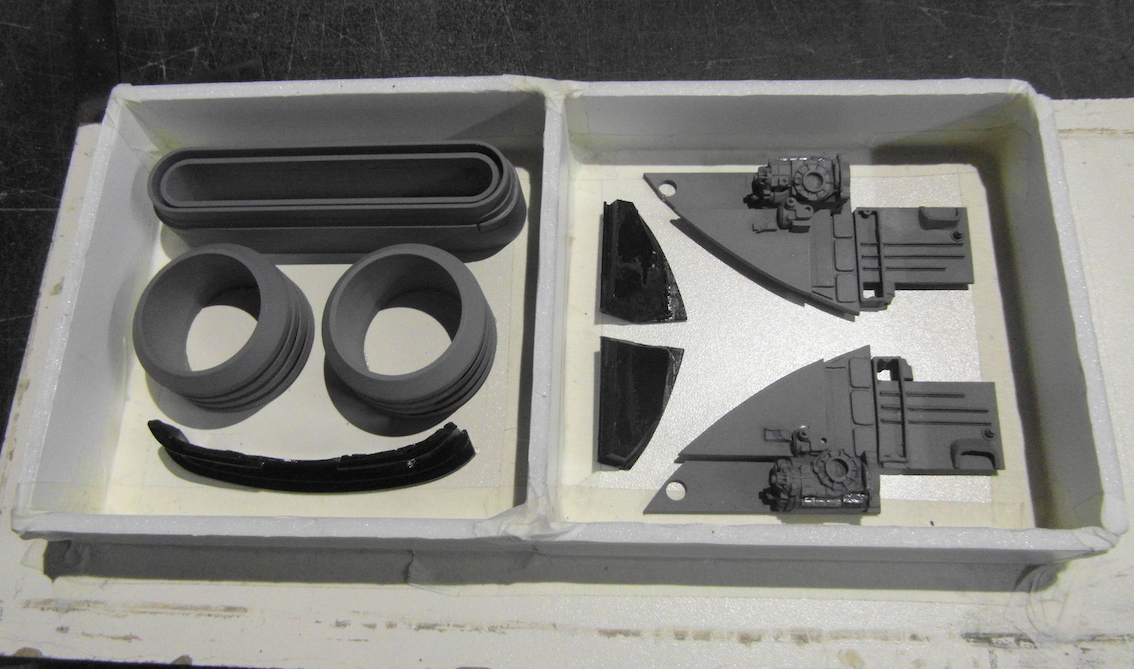 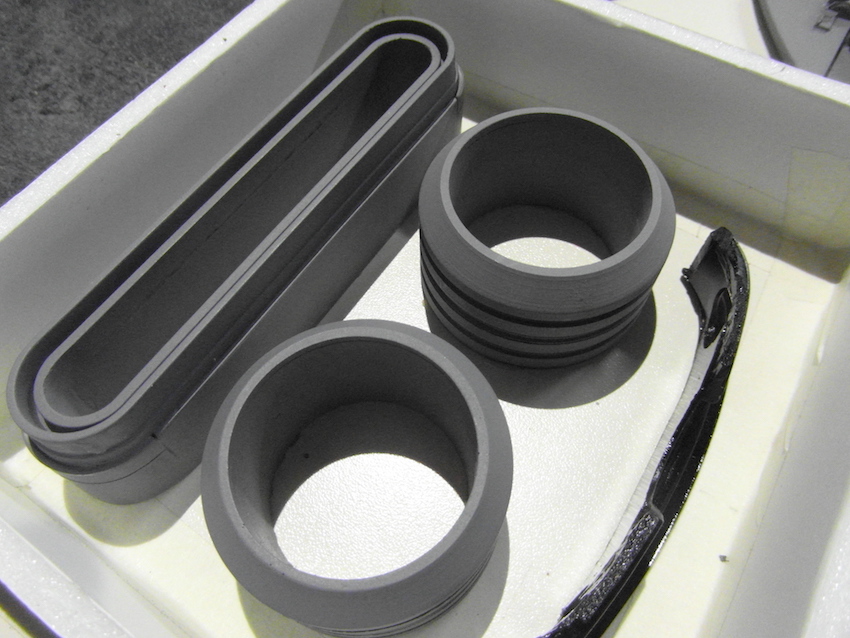 Silicone mixed and poured with as much care as i could. 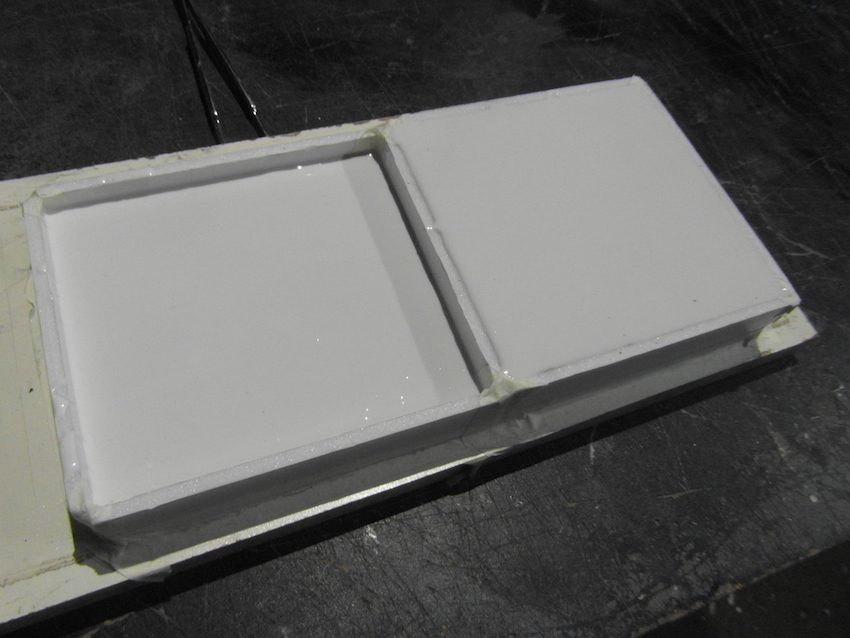 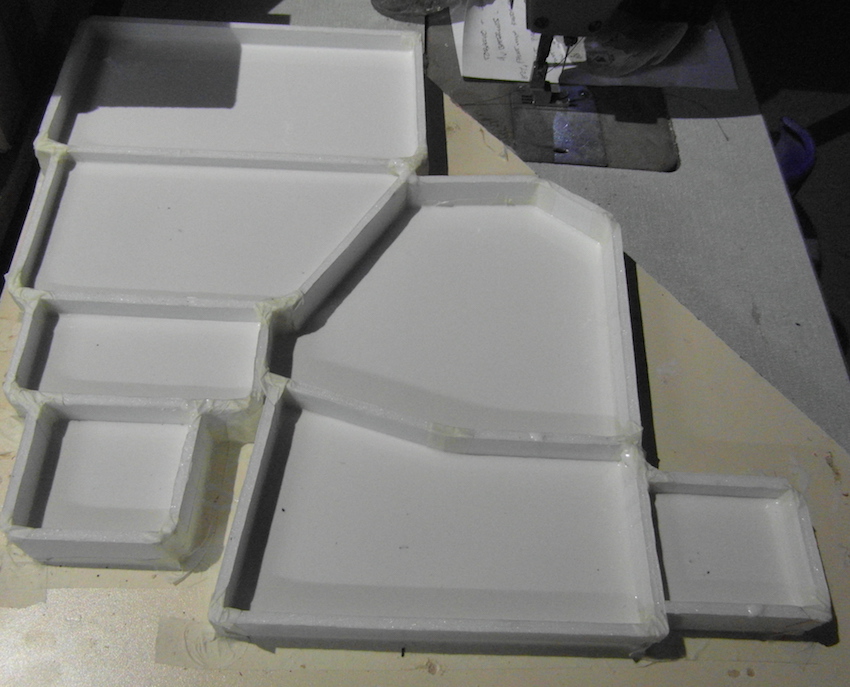 Exciting times ahead pulling this lot off the board.

RPF PREMIUM MEMBER
Looking sweet, I Iove these rework projects! And the casting of the parts really takes it up a notch, excited to see the finished parts.

Flyscriber said:
Silicone mixed and poured with as much care as i could.
Click to expand...

Uhhhh... what kind of silicone is that, exactly? What type of catalyst is used and how do you tell if it's thoroughly mixed?

The 48th Ronin said:
Uhhhh... what kind of silicone is that, exactly? What type of catalyst is used and how do you tell if it's thoroughly mixed?
Click to expand...

Its known here as this :-
T28 RTV silicone rubber. Pale grey in colour, pourable and slightly firmer than T20. It can be used for making block moulds or skin moulds where large undercuts are present. T28 is suitable for the casting of plasters, ciment fondu, waxes, polyester, polyurethane and epoxy resins. Shore A hardness is 25.
Supplied with T6 catalyst to effect the standard pourable cure.

Thats the sales blab anyhow. It did have a pink hue to the catalyst a few years ago which helped with the mixing. Now clear catalyst in white is somewhat a pain, but you know by the consistency when it is mixed well. Its very long lasting and strong and i've done many jobs with it, so i tend to stick with what i know. Im no expert mould maker thats for sure, but im pretty sure this will work out. Should get a least 30 pulls or more from them. I have a mould for my Ennis tiles which is over 90 pulls and is still in pretty good usable shape. I hope this one goes the same way.

RPF PREMIUM MEMBER
Wow, that's crazy. Seems like clear catalyst would be a recipe for disaster.

Thanks for the info - can't say that I've ever encountered anything quite like that before.
J

Pretty awesome - are you planning to sell an upgrade kit? If so I may have to go get one of these TVC slave 1's

RPF PREMIUM MEMBER
Home run dude. I might need to revisit my Slave 1.

Jedi Dade said:
Pretty awesome - are you planning to sell an upgrade kit? If so I may have to go get one of these TVC slave 1's

Thats kind of the plan. I'll do an assembly with the first pull parts to see how it looks all cast and do the final greeblies once its all together. If it looks decent enough ill offer them out until the mould is done. Obviously you can upgrade and tweak the parts yourself as they will all be resin and easy to mod.
Looks like the gun barrels will be the most troublesome. Ive built numerous resin SS kits and none have really hit the mark with the small cast gun greeblies. So buying a Flak gun kit (20mm Flakvierling 38 Mit Sd.Ah.52 1/35 Scale) or two will probably be the best solution for the dish details and some of the greeblies on the bottom, just to keep things sharp and straight. (Ive just bought 2 kits for 15 quid, about 20 bucks or so)

Just the dish to mould up before i can make the first fitting test.
Im cleaning up the moulds at the moment for the first pour of the parts. more tomorrow.