In honor of Star Wars Day, my latest WIP.

Slave 1 is probably my second favorite ship after the Falcon and I managed to find one at normal price at Newtype.com (Woot!). I've got the priming, shading, and base coat on everything at this point, and I've been experimenting with chipping methods since they feature so prevalently in the paint job. I've been happiest with AK Interactive Worn Effects chipping fluid. I have found that if I spray it in just the areas I want, I can control the effect much more tightly. There will always be a healthy dose of randomness, but I can contain that to the areas where I want it.

May the Fourth be with you.

I scribed some panel lines on one of the extra base curbs to practice chipping with the AK Interactive chipping fluid. On the left side, I carefully sprayed the fluid on just the panel lines, on the right side, I sprayed it over the entire face. Based on this, I'm confident that I can get the chipping where I want it. I do need to be careful on any raised edges, If you look closely you can see some raw plastic where I got a little too aggressive and rubbed down to the raw plastic. I'm hoping this won't be an issue with the actual parts since my test was not primed. 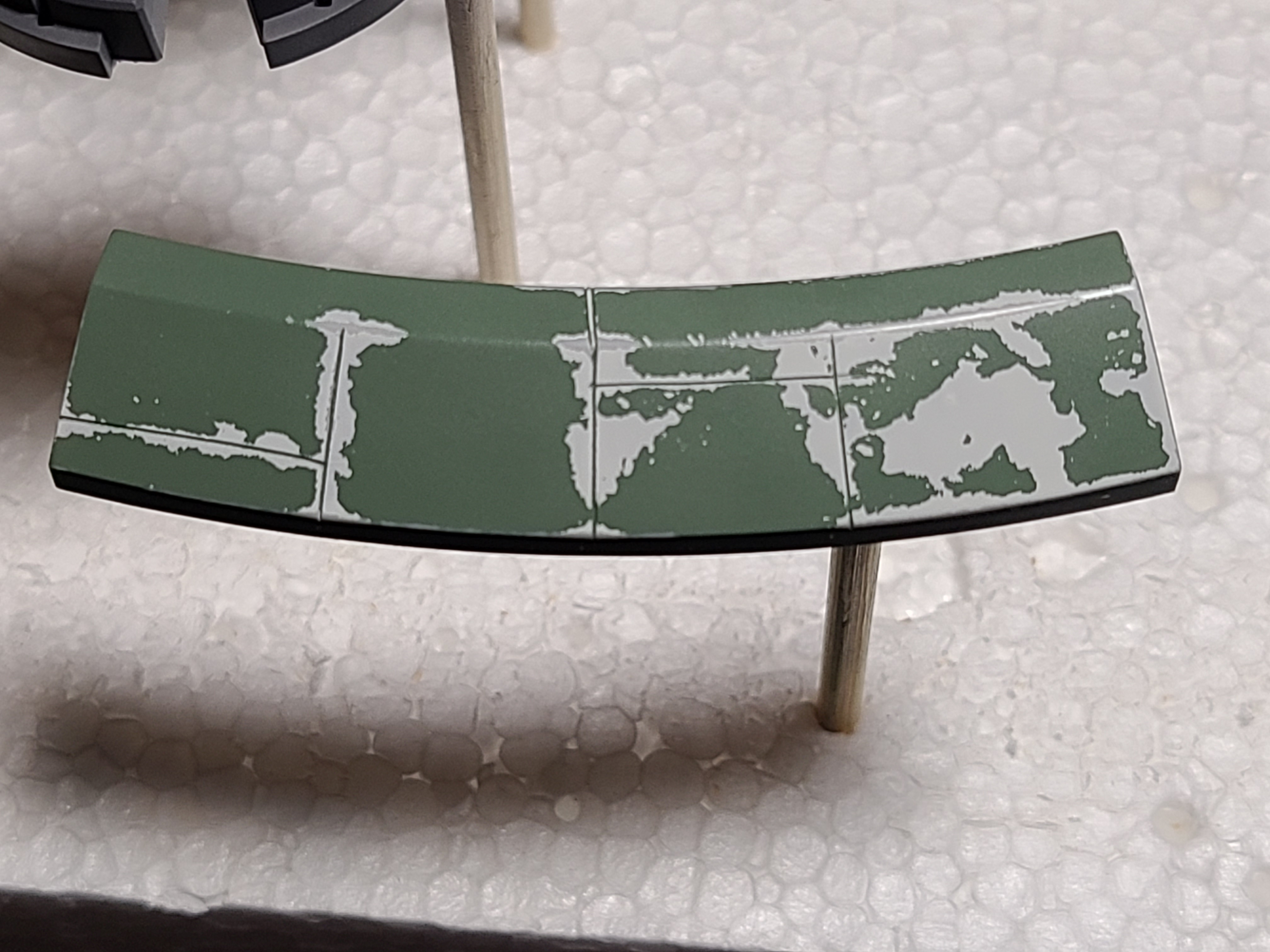 Base coat on the engine shroud. I preshaded and left the base intentionally a little light since there will be a lot of layers on top of it. The shading comes through much more clearly in person as opposed to in the picture. 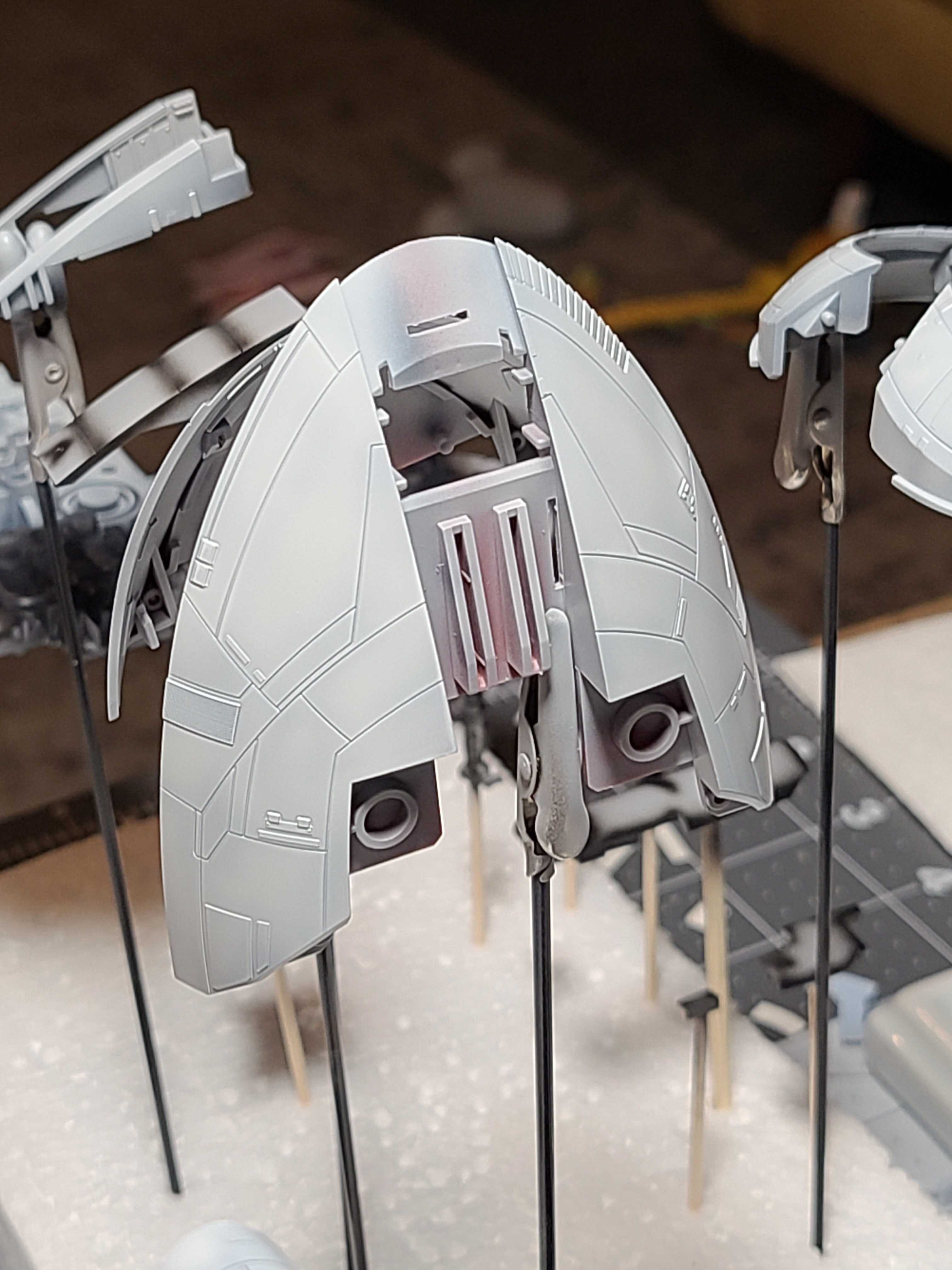 Nose base coated, the shading shows up much more clearly in this pic for some reason, even though the coverage is about the same as for the shroud. 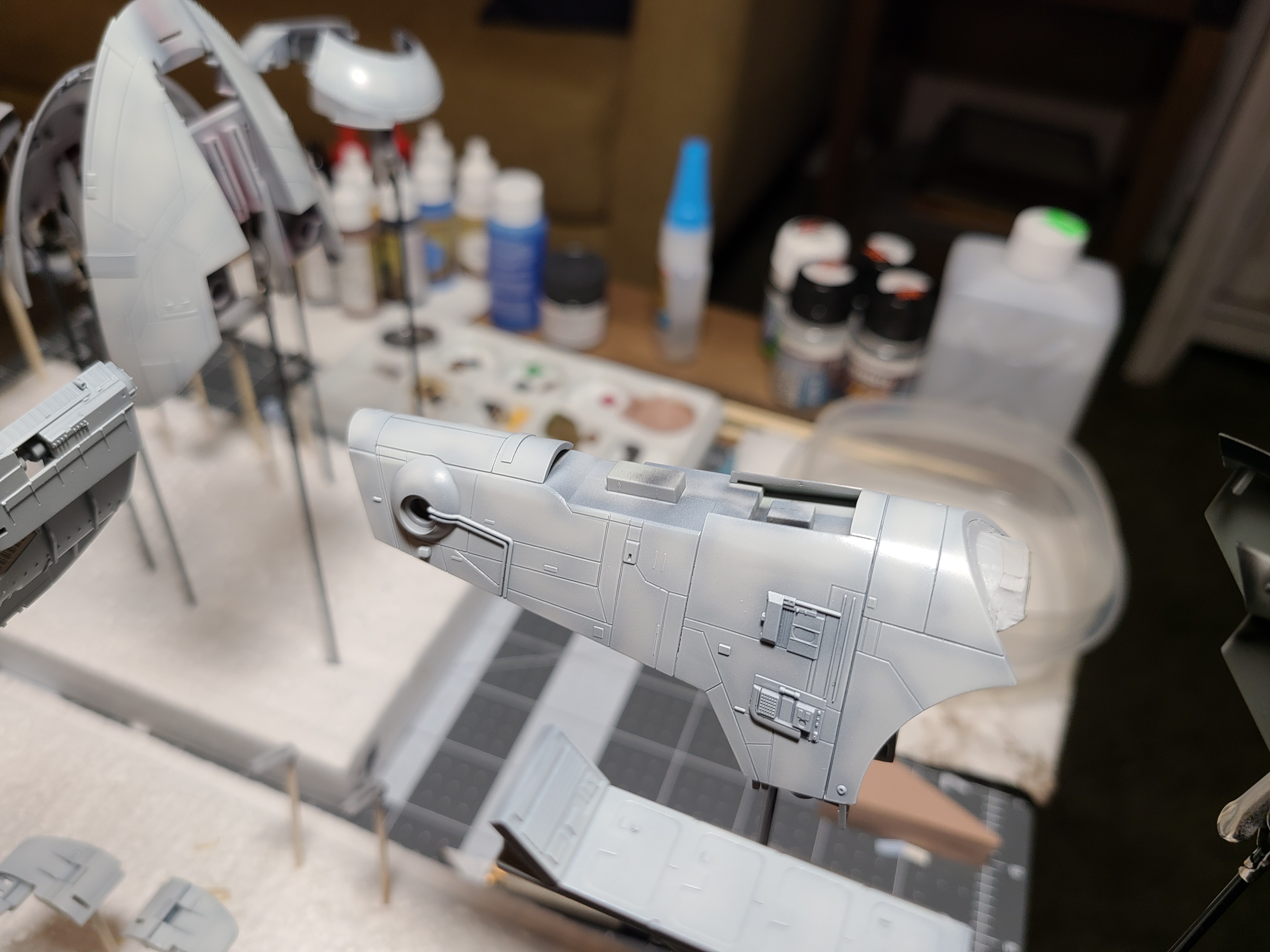 All of the bits, everything with the off white base color is done at this point. 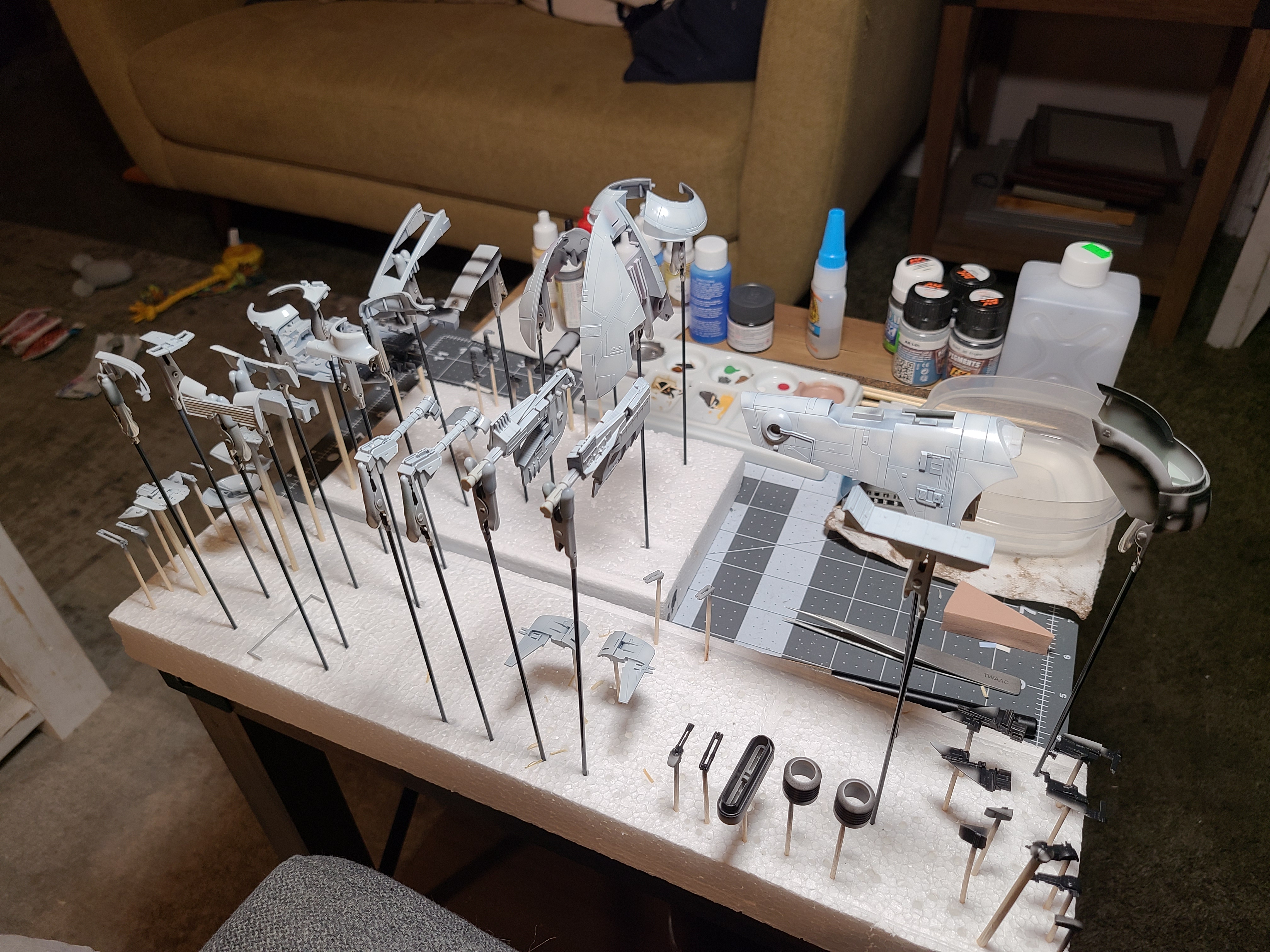 Underside bits done with the light olive and medium grey. The dark bits on the base will get a go with burnt iron pigment powder to give it some metallic sheen and darken it up a bit. The stabilizer pivot machinery will get a darker grey coat that will have a fair amount of random chipping all over. 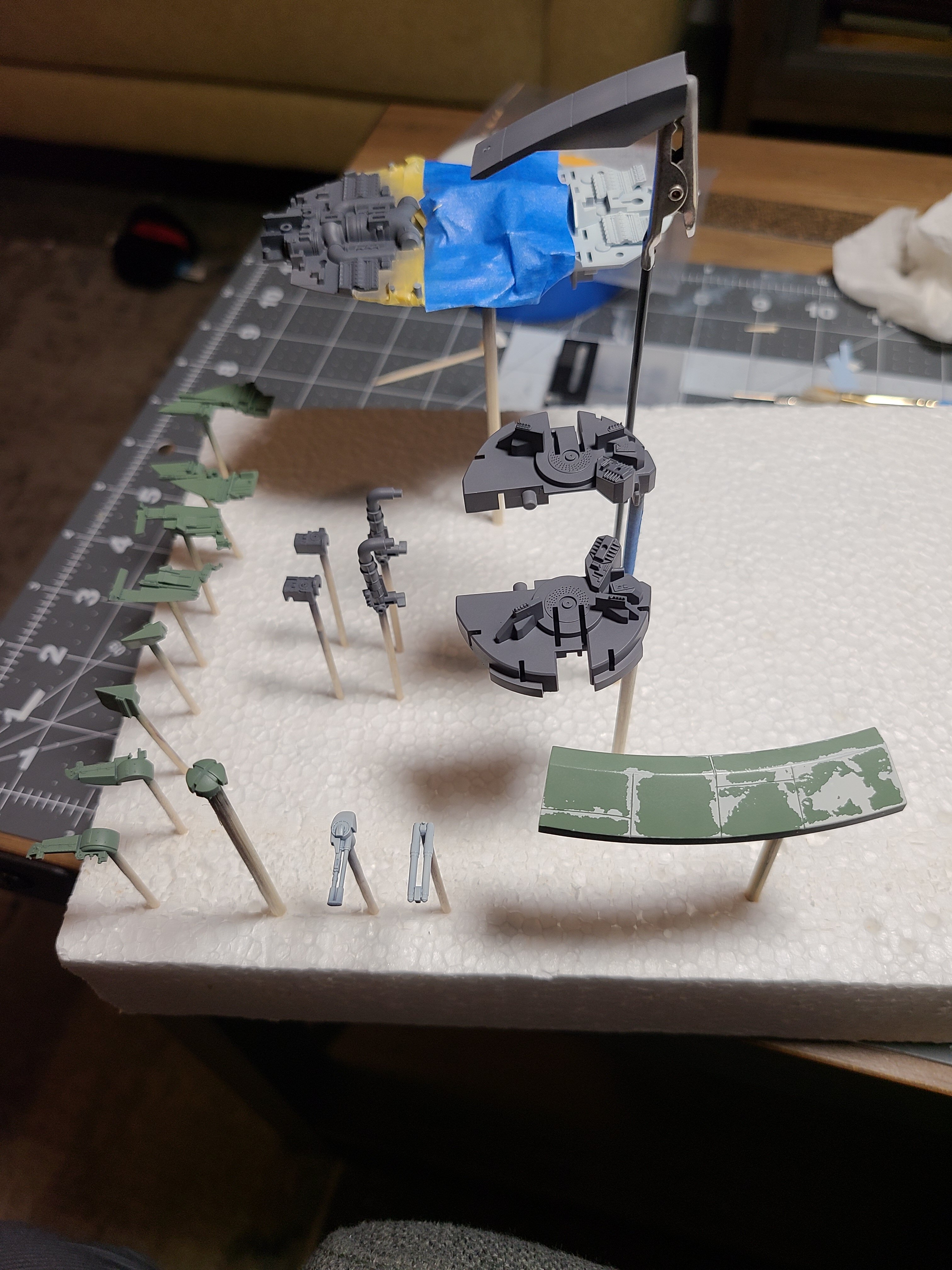 Analyzer said:
Slave-1 i one of the most rewarding paint jobs when done

Thanks! I did some more testing tonight. I added a second layer to my test piece, I'm pretty happy with how it came out, but it tends to wipe out any of the small random chips. 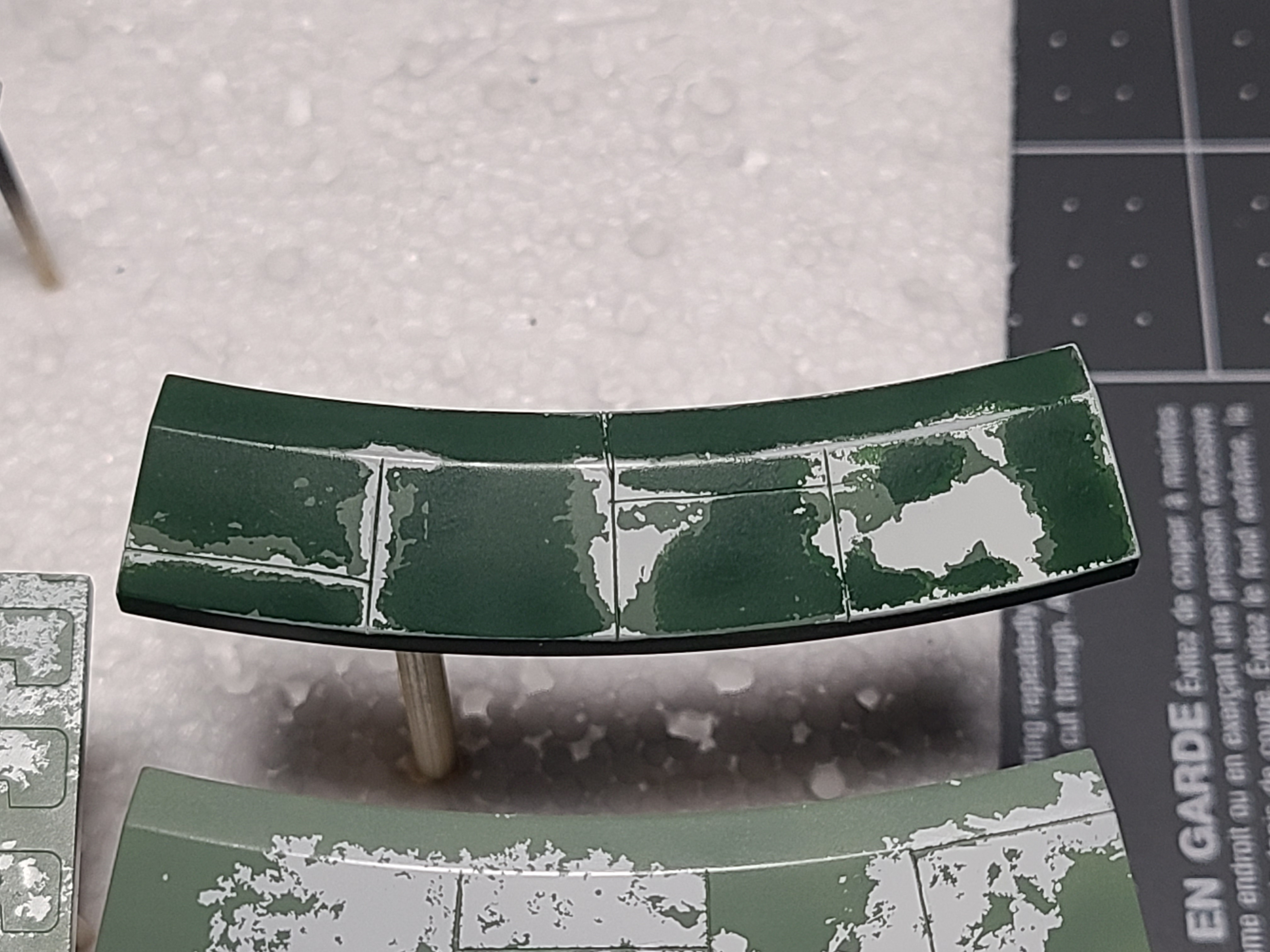 I also tried another chipping method, applying thinned Microscale Micro Mask with a very small bit of sponge. It's actually a lot harder harder to control, but I love the small scale chips and there's no chance of blasting through the base coat like it did with the first layer and the chipping fluid. I'll have to mull it over and decide how to proceed tomorrow. 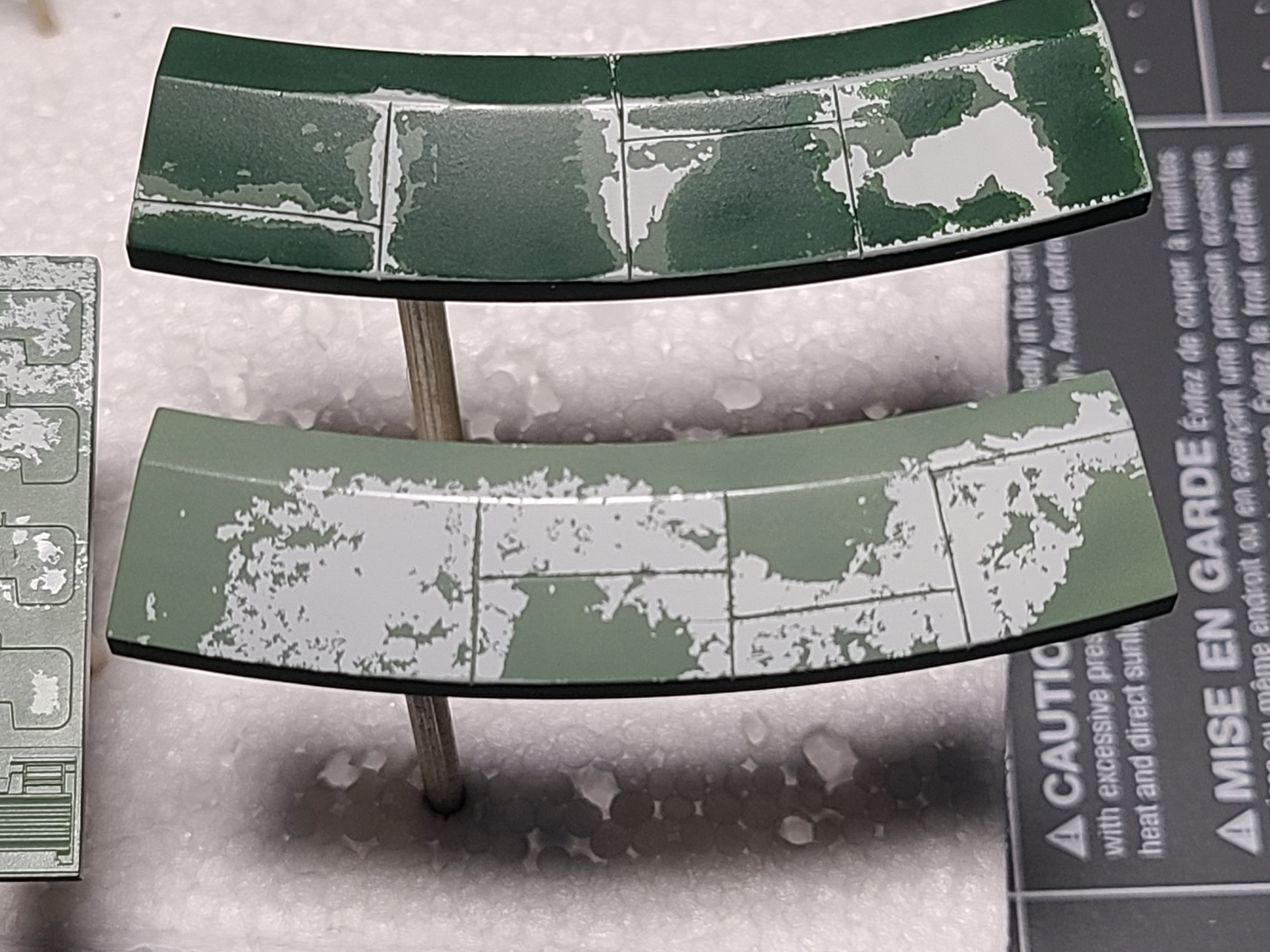 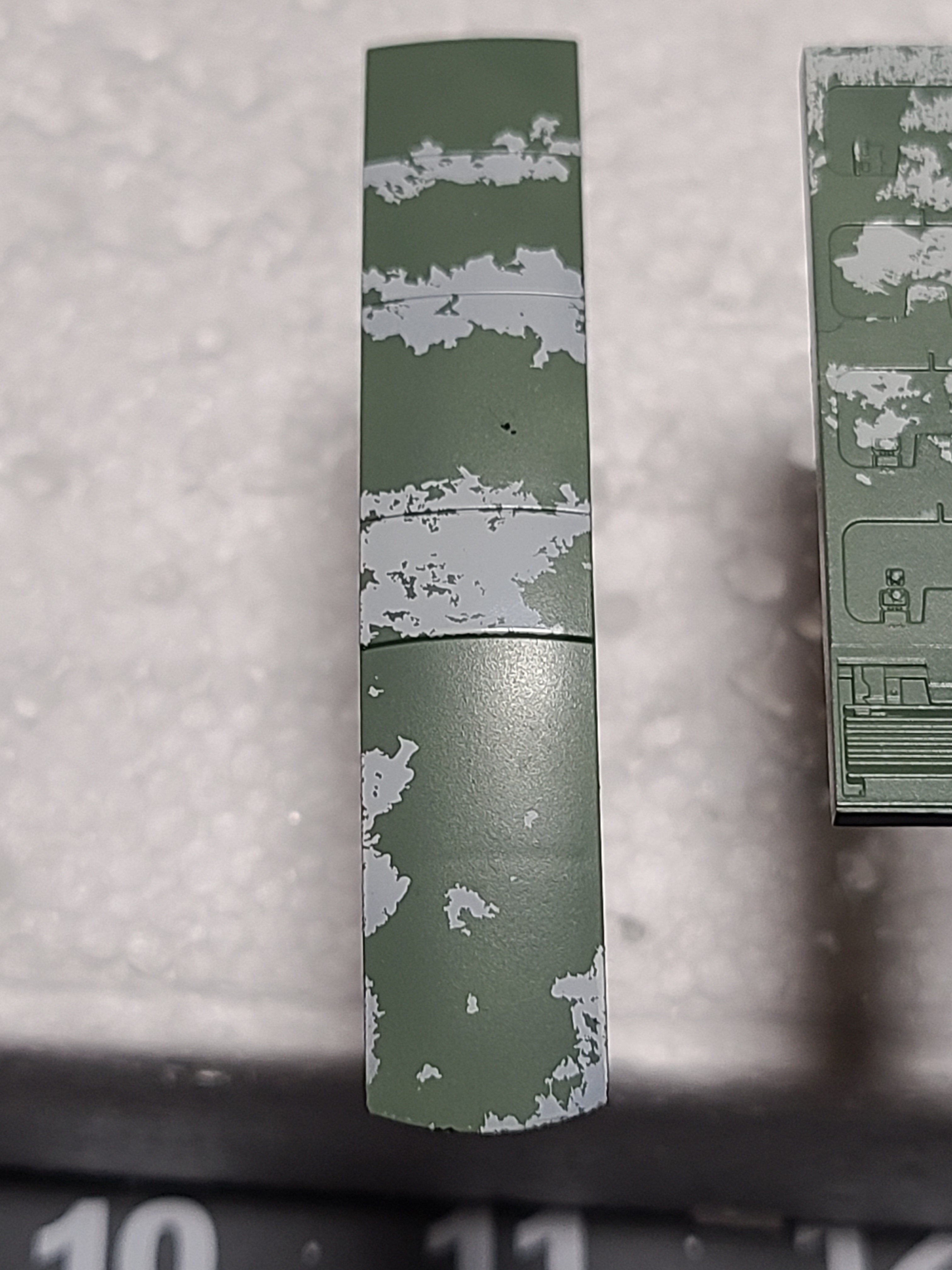 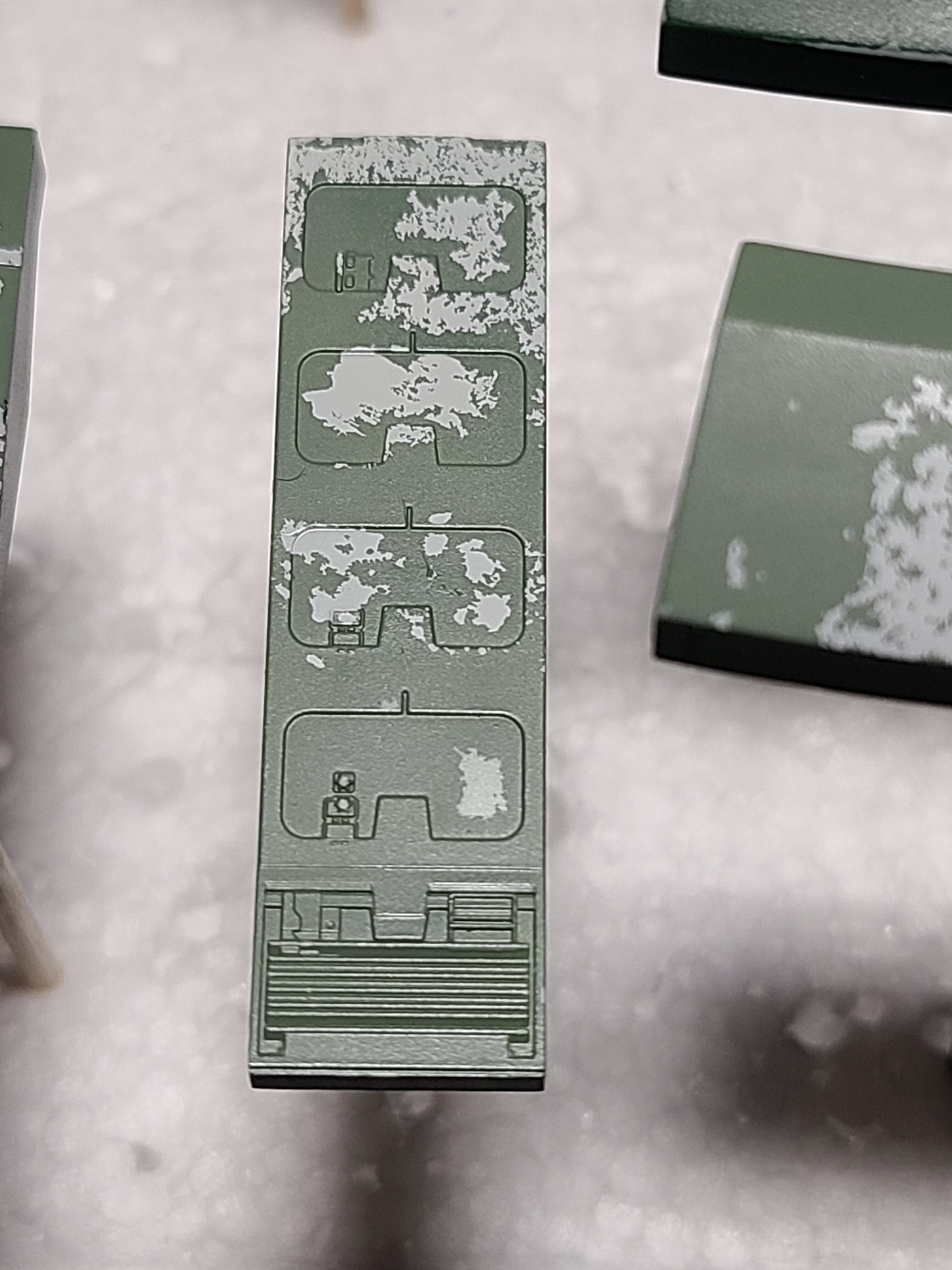 Both look great. The flaking back to two separate base colours makes it though! It has stories to tell.

starks said:
Both look great. The flaking back to two separate base colours makes it though! It has stories to tell.

I like them both and I'd be happy with either, but I think I'm leaning towards using the Micro Mask. The small scale chips really sell it in my opinion and I think it will look amazing when I get multiple layers on it. I'm just going to have to be very careful when applying it.

I started weathering and assembling the engine bay. I've got a few layers of grime on it and burnished the dark areas with AK burnt jet exhaust pigment powder. It gives it a very subtle metallic sheen that really brings out some life in the parts. 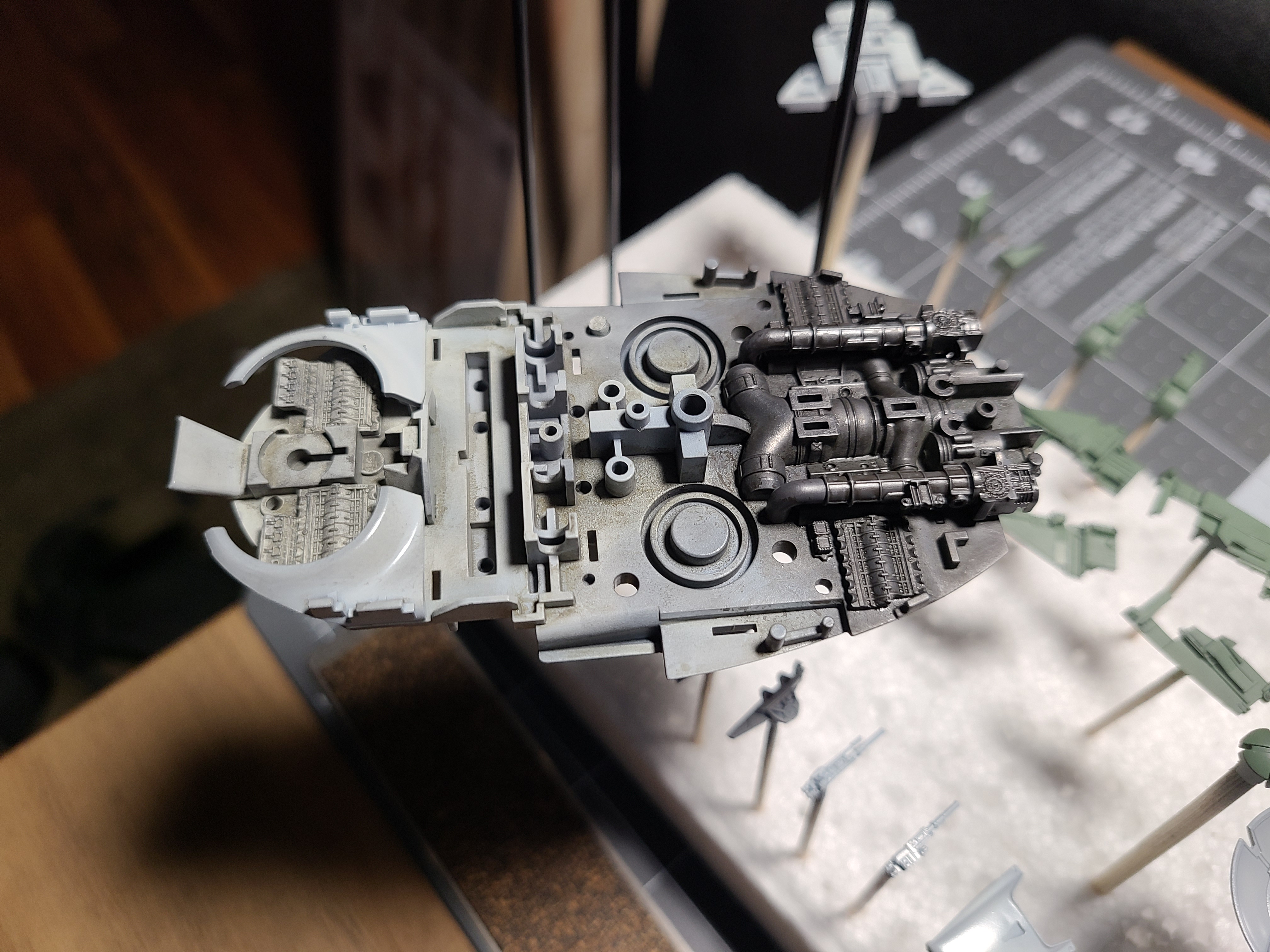 JNordgren42 said:
I also tried another chipping method, applying thinned Microscale Micro Mask with a very small bit of sponge. It's actually a lot harder harder to control, but I love the small scale chips and there's no chance of blasting through the base coat like it did with the first layer and the chipping fluid. I'll have to mull it over and decide how to proceed tomorrow.
Click to expand...

I also went back in with an old brush and dabbed some paint in areas as a touch-up where needed, the stiffer and more frayed the tip is the better

I got the first layer of chipping down on the engine skirt and fuselage parts, I think it's looking good so far. The paint ended up drying a bit more vibrant than I would have preferred, but I think I can knock it back in weathering. 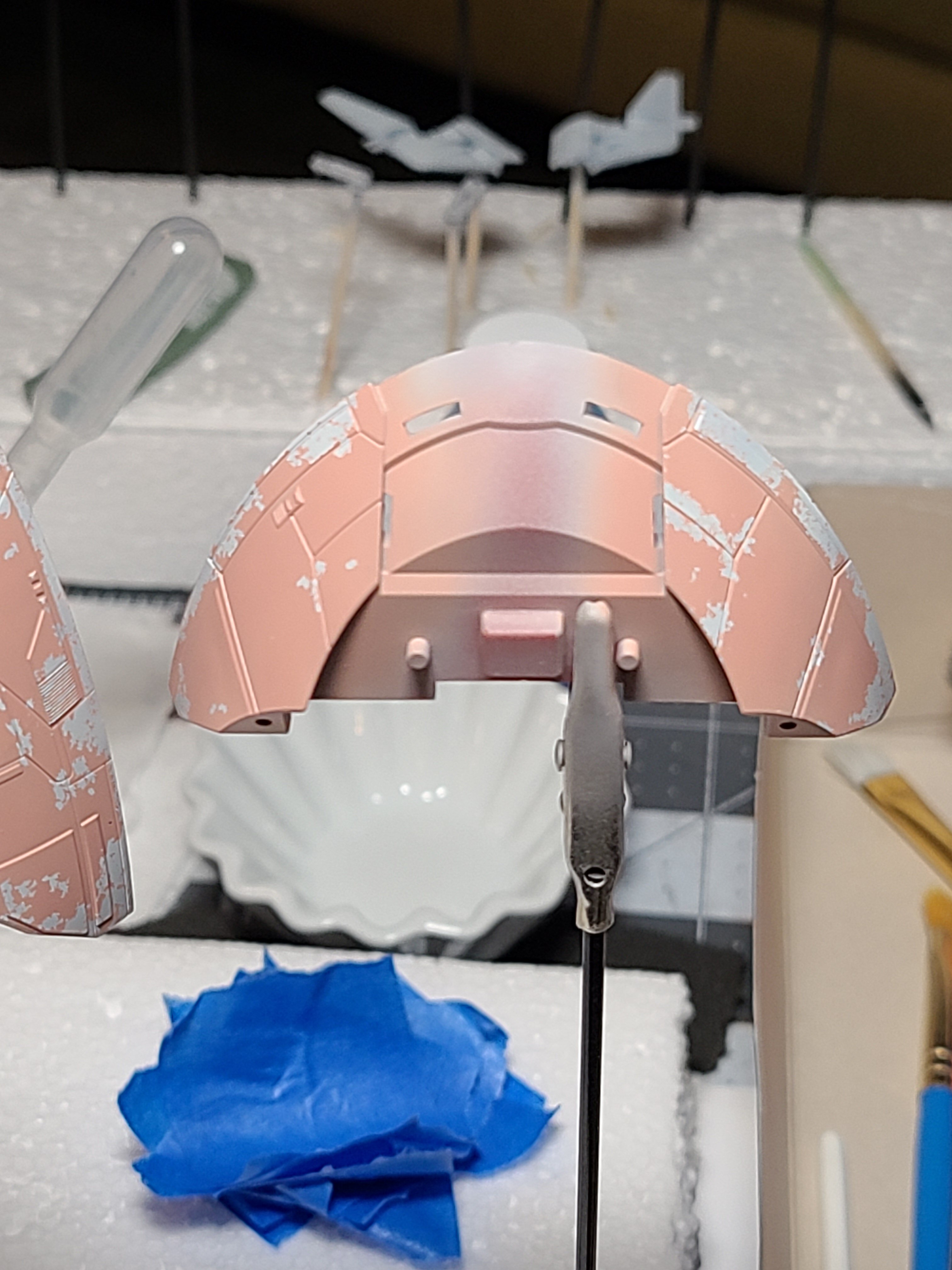 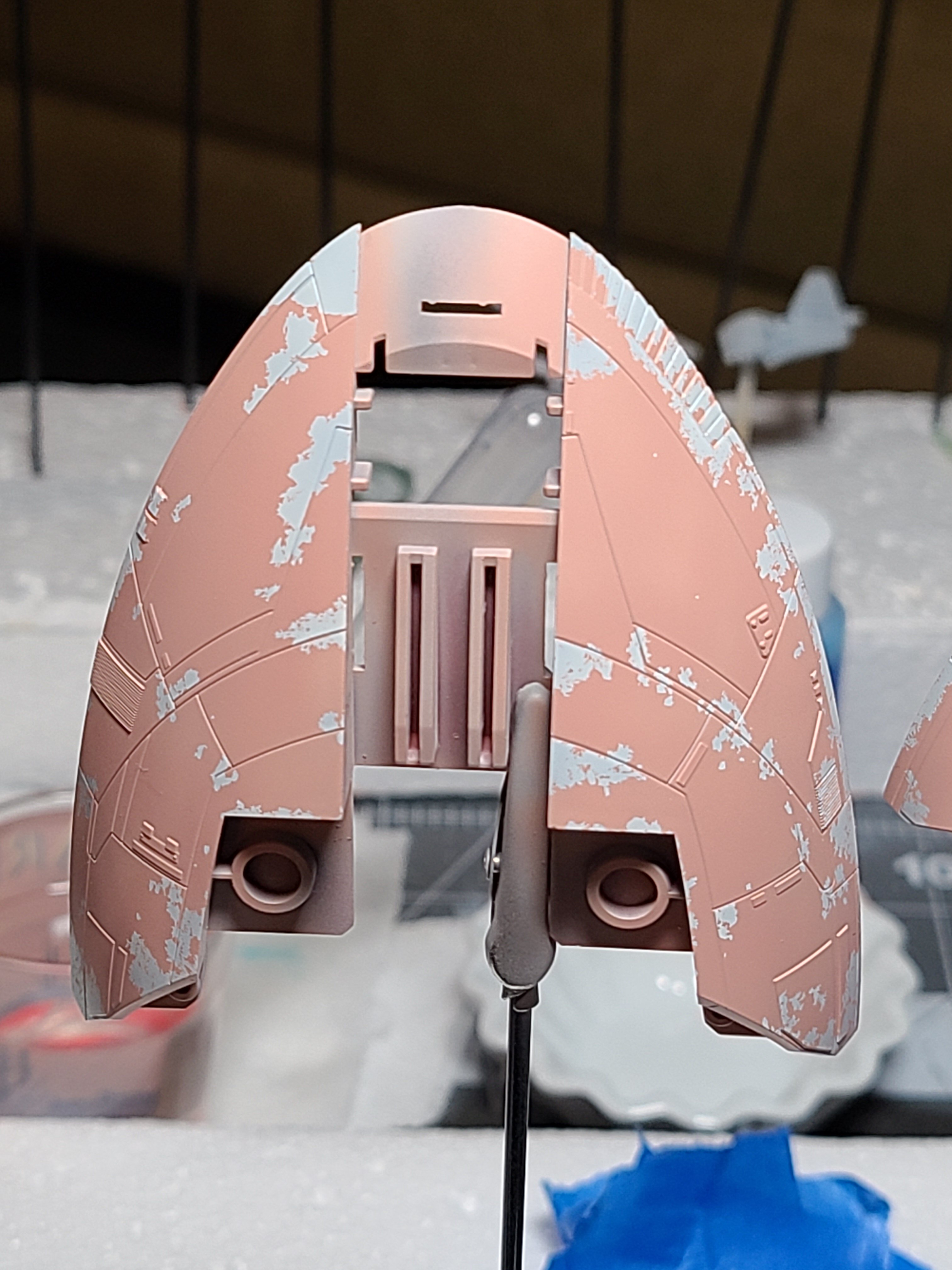 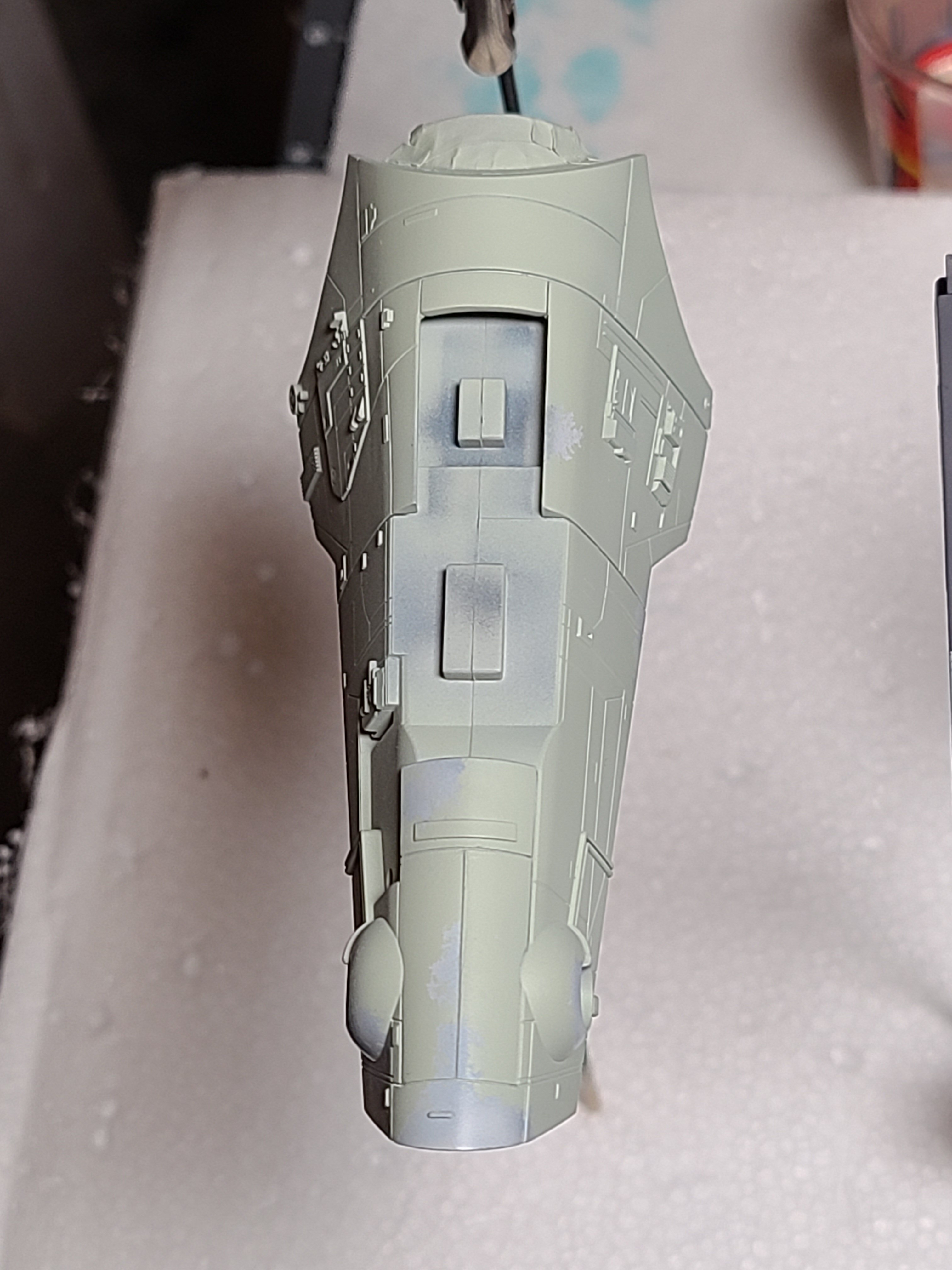 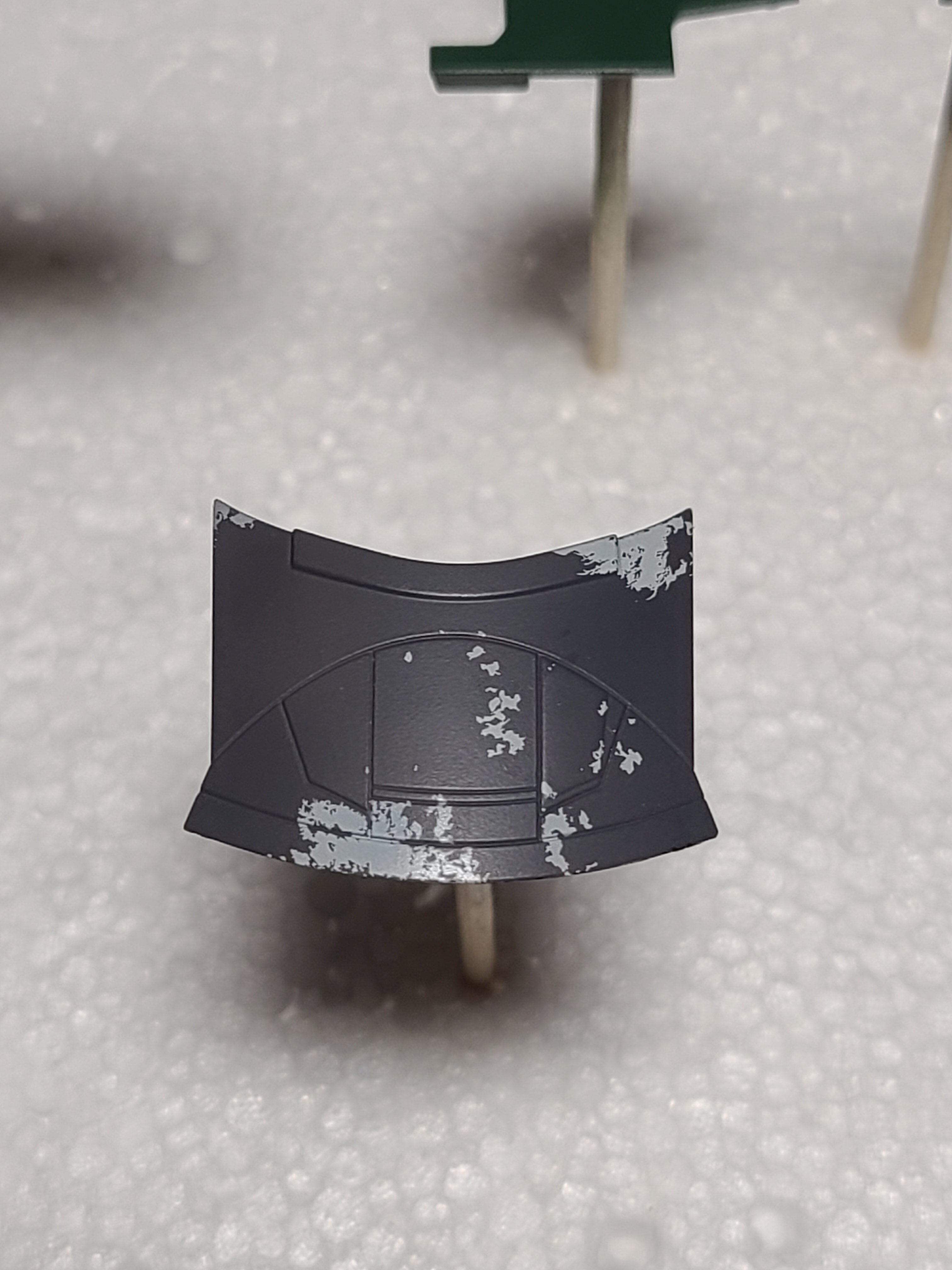 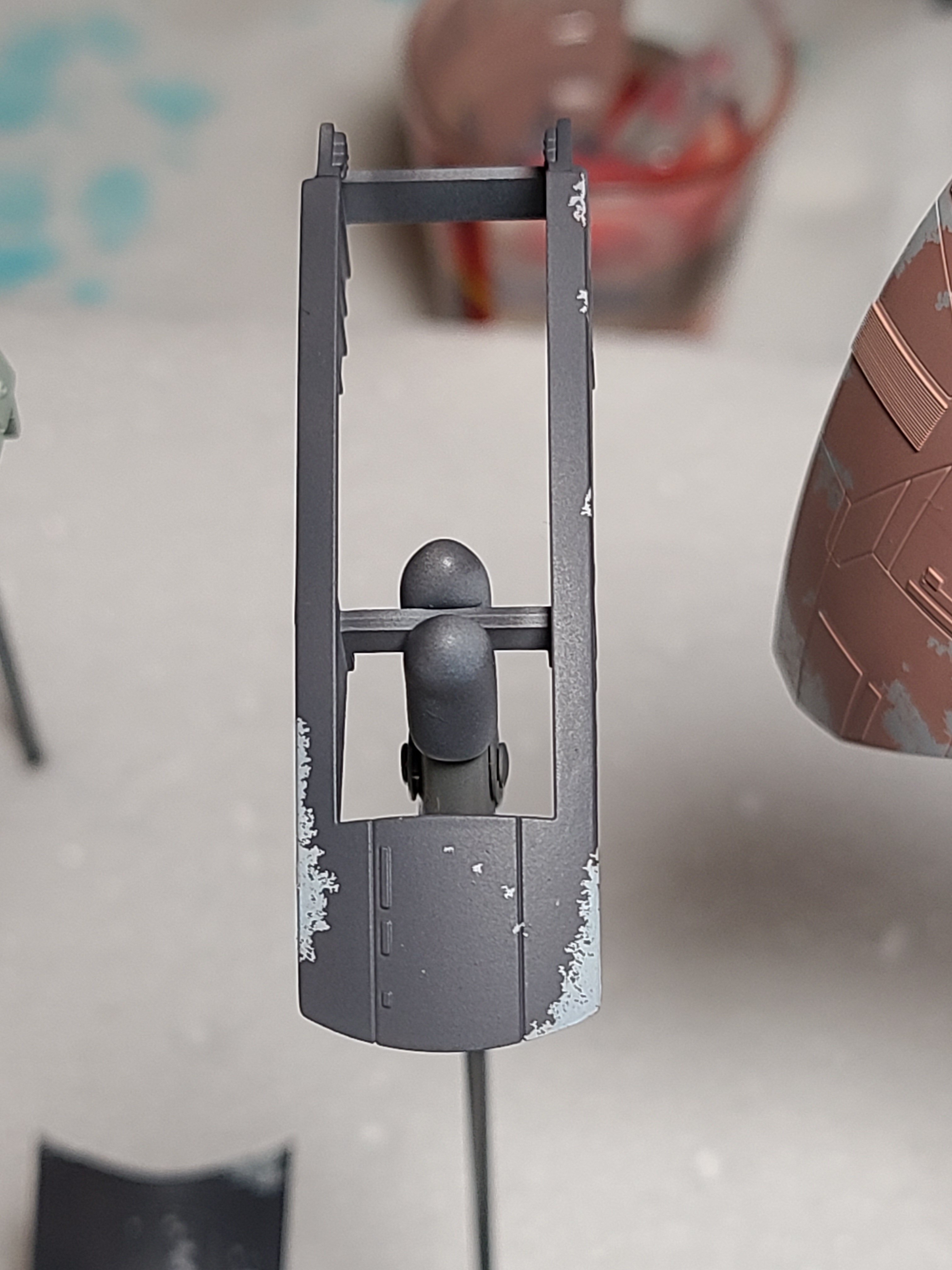 I got the rest of the base colors on the main hull parts tonight and did a little test fit. I think there's a little too much saturation and contrast in the colors I mixed, but I should be able to knock it down with weathering and perhaps a light grey mist coat. The gaps in the burgundy chipping on the engine skirt are also a bit too aggressive, but I think I'll leave it alone. This is never a paint job that's going to be 100% perfect compared to the studio model because of the random nature of the chipping. I'm happy with it at this stage and I think that's what counts. 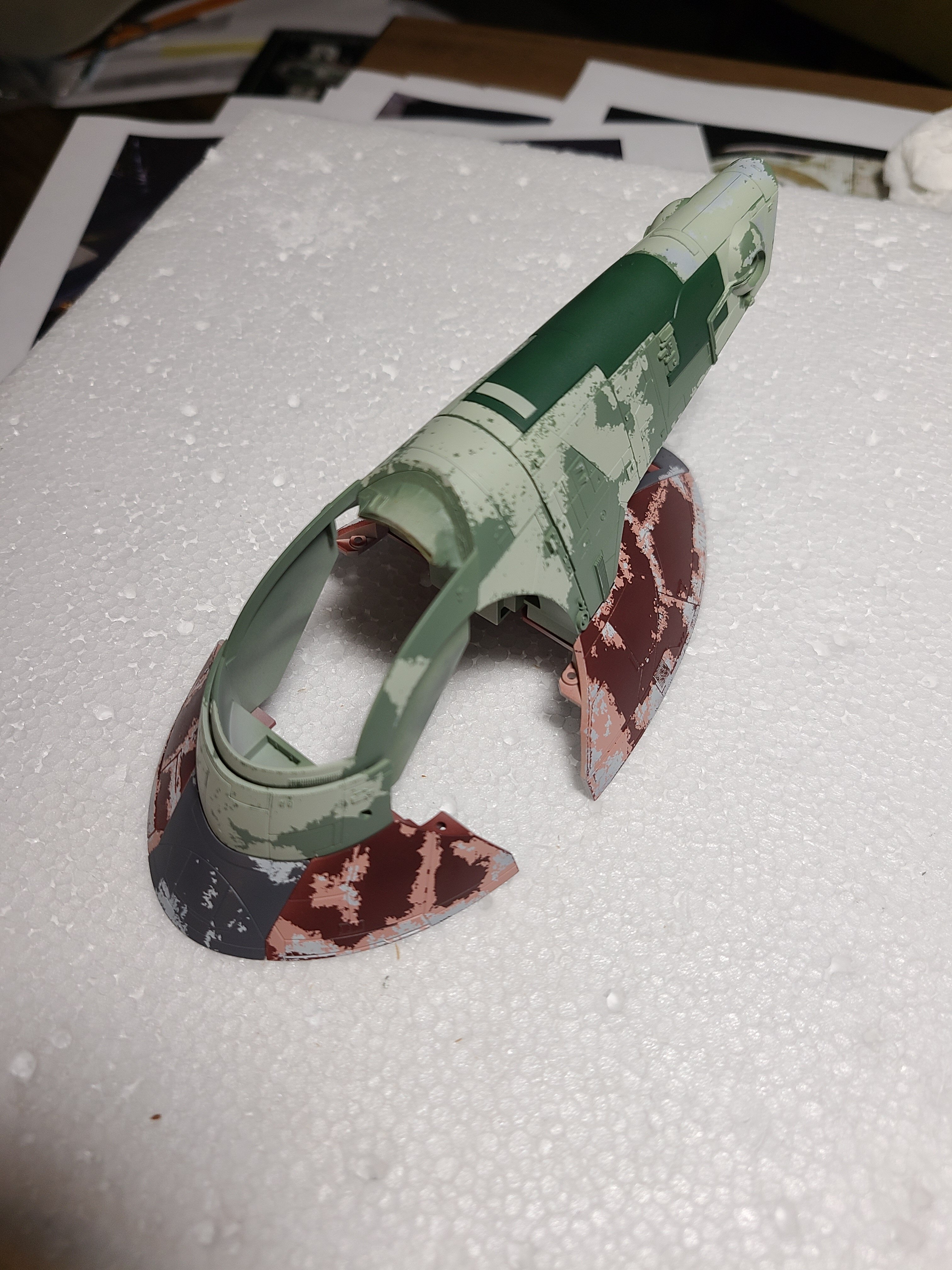 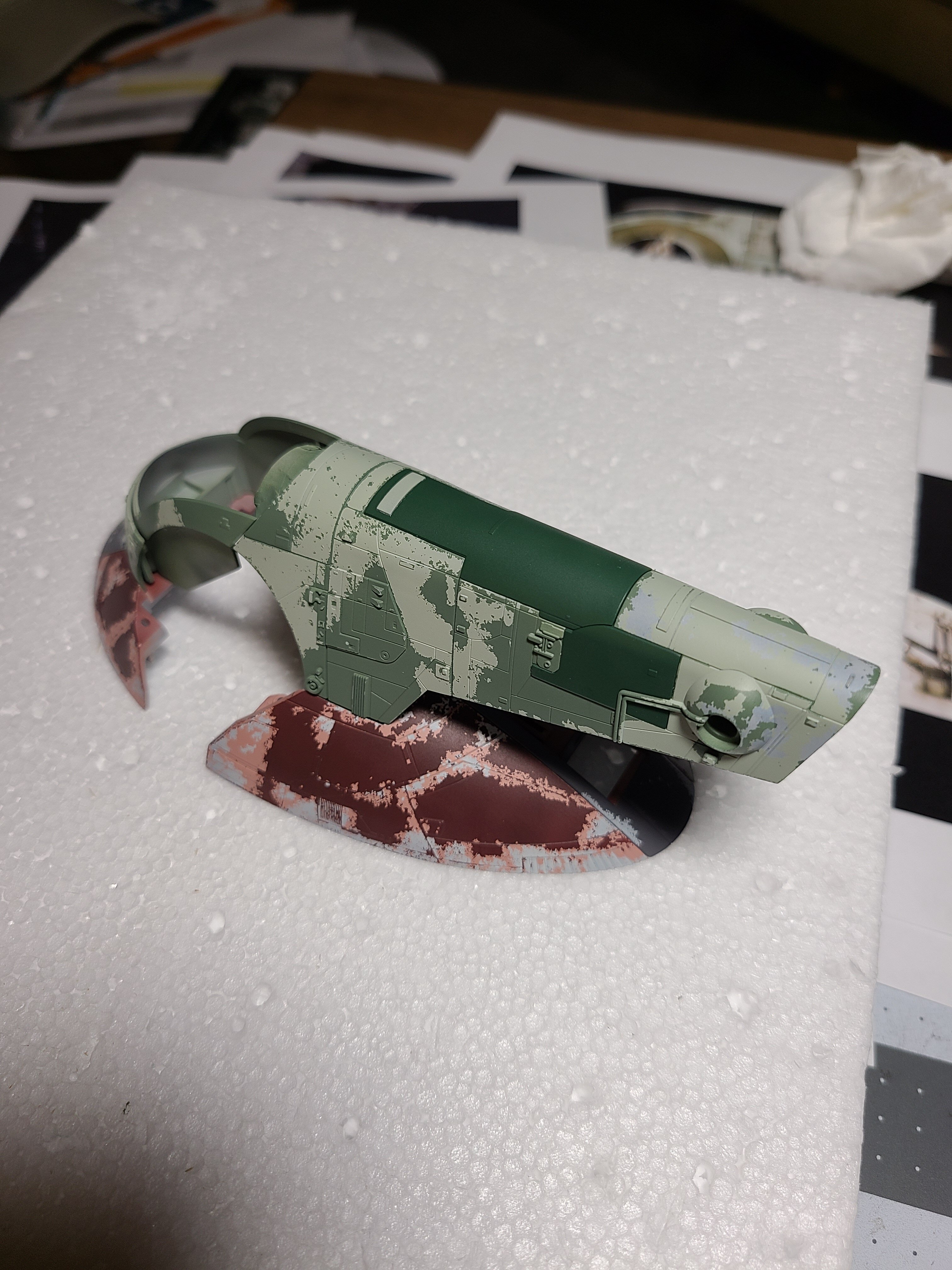 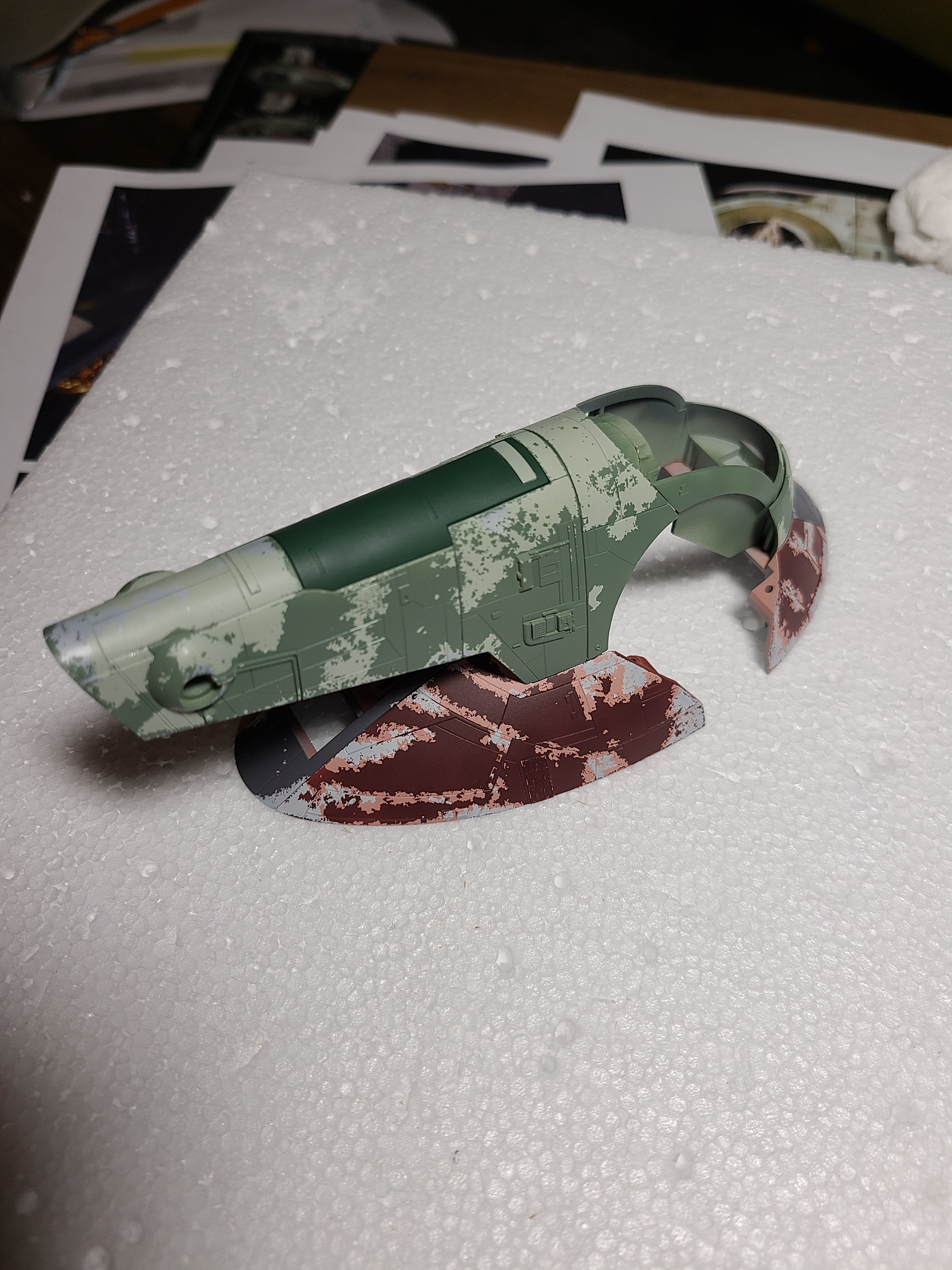 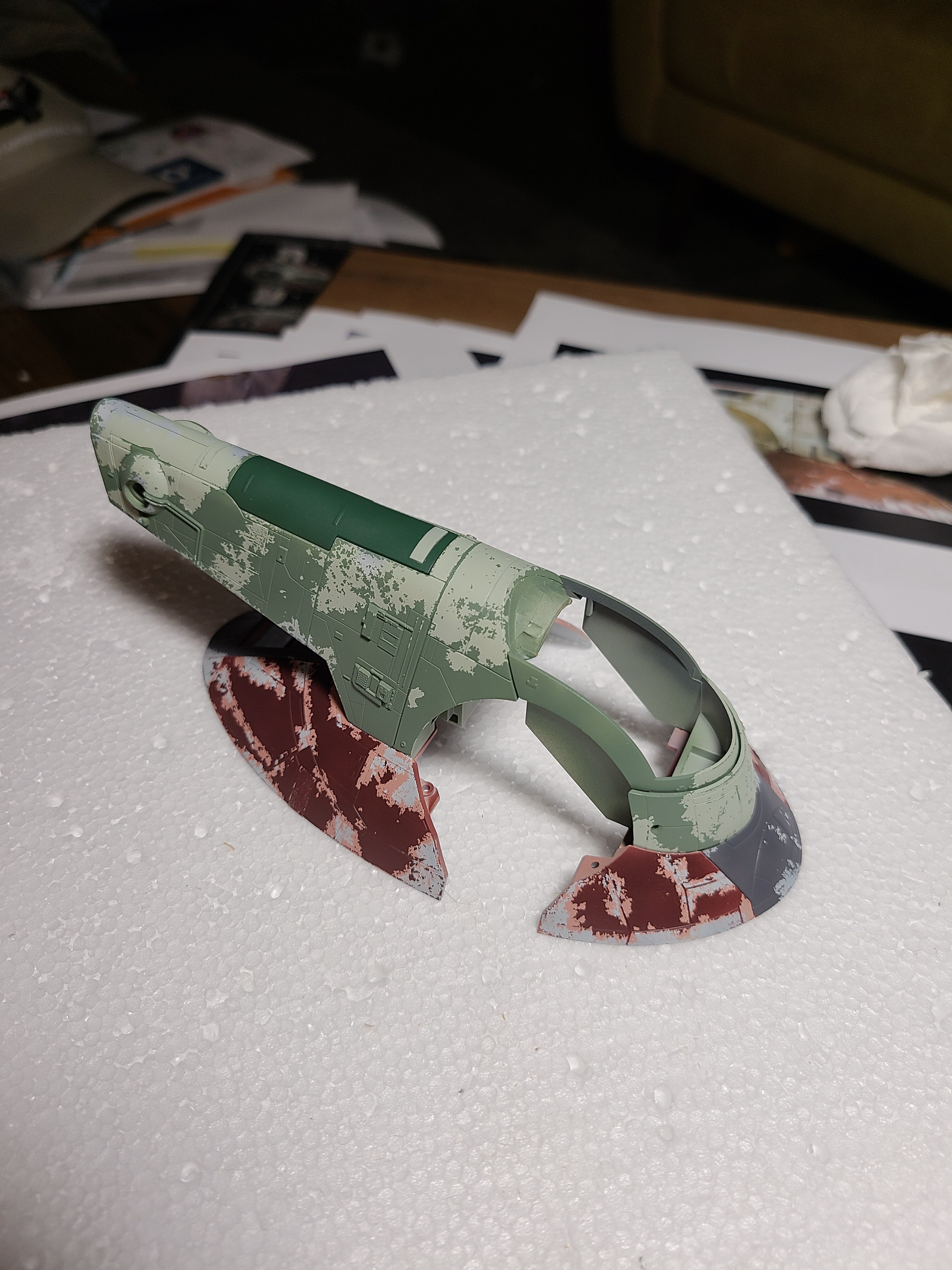 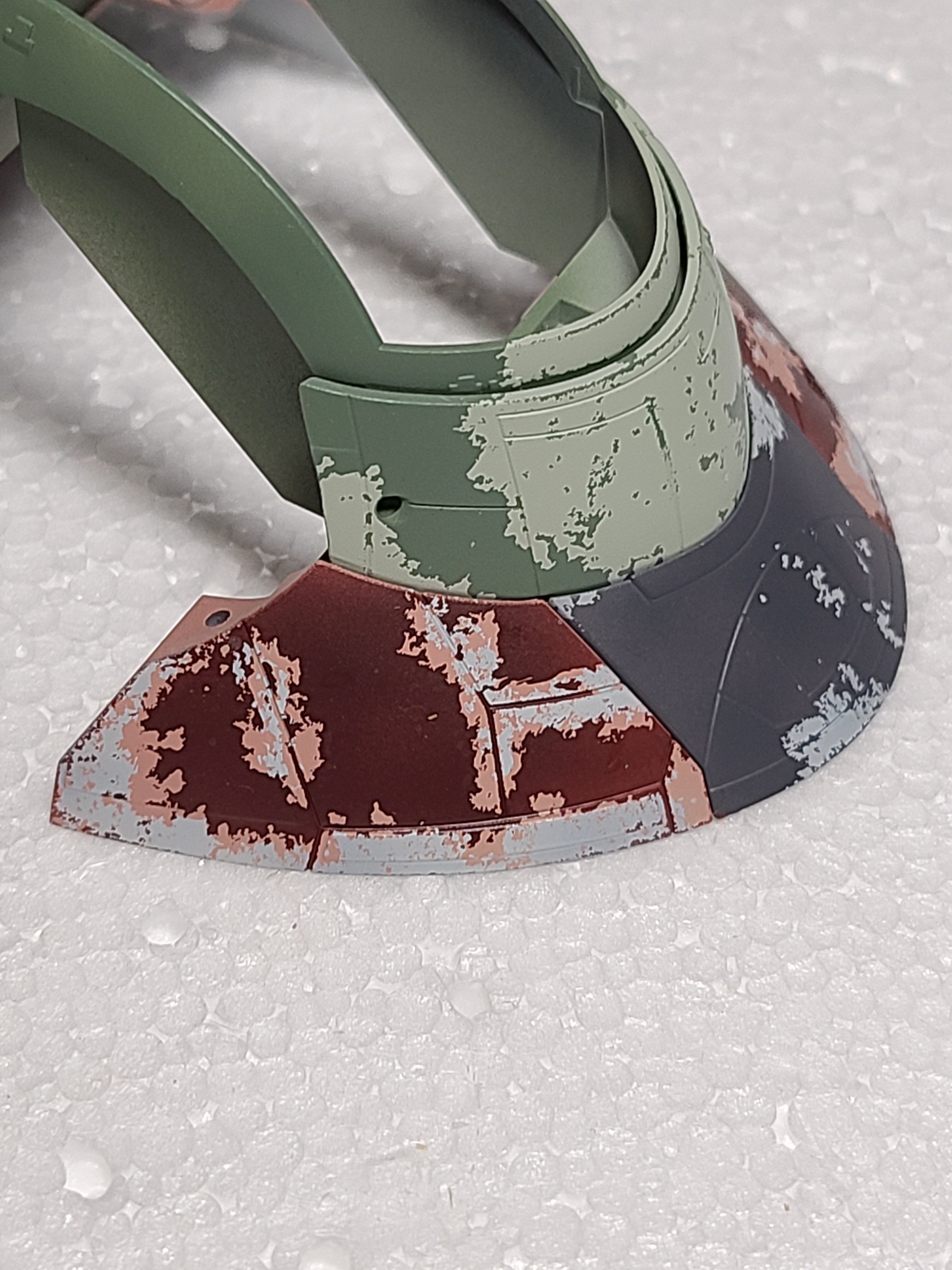 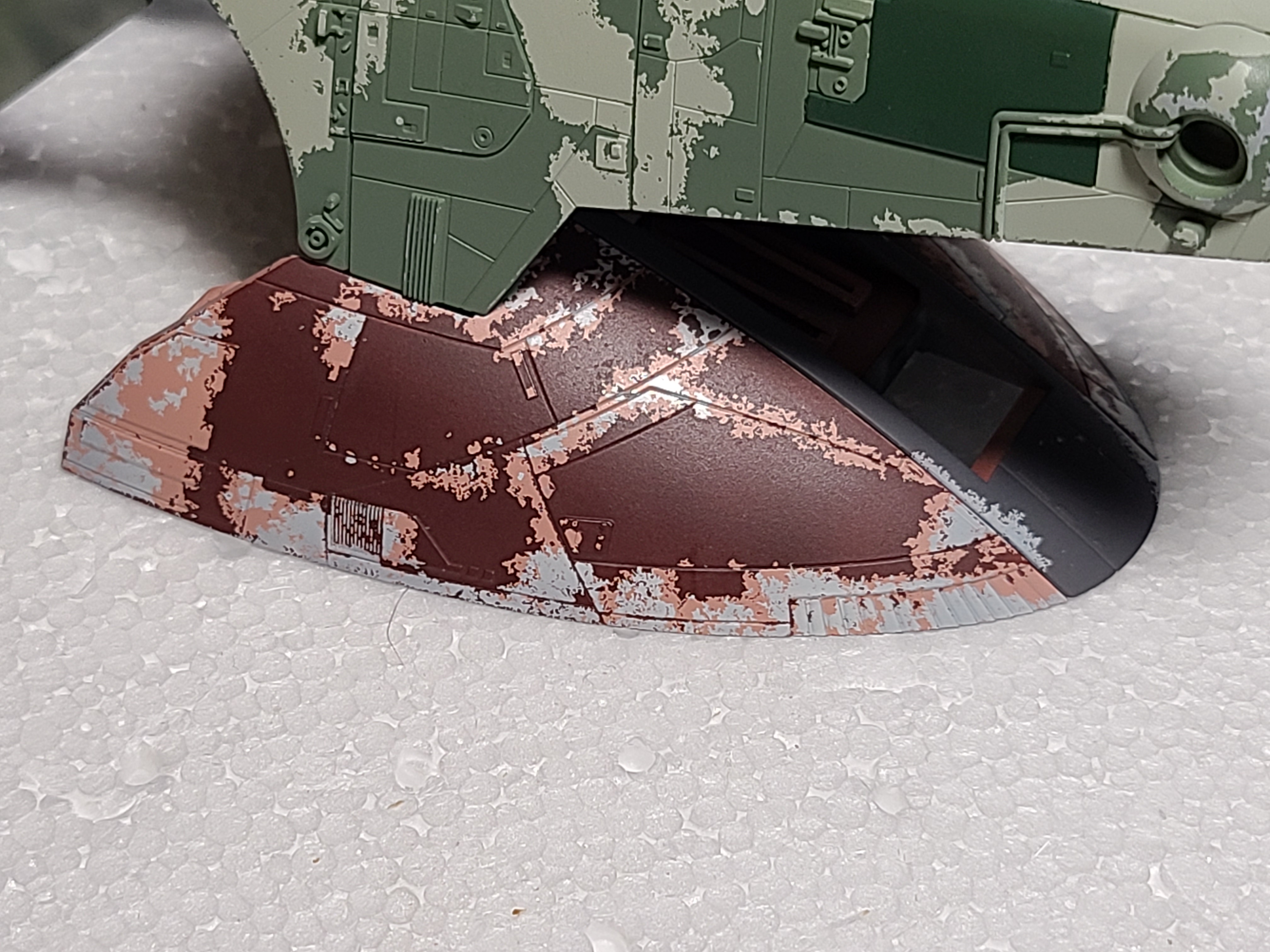 Wednesday at 5:57 AM
starks