RPF PREMIUM MEMBER
I've received numerous inquiries about the mods I've done for my Sideshow "Baby Yoda" through Facebook, other RPF threads and my Instagram "soulinertia" (namely modding the arms to be able to move). So I've decided to compile them all here. I've only done a few upgrades so far, but I have plans for many more, so I will keep updating the thread accordingly. Here is a pic after modding the arms. 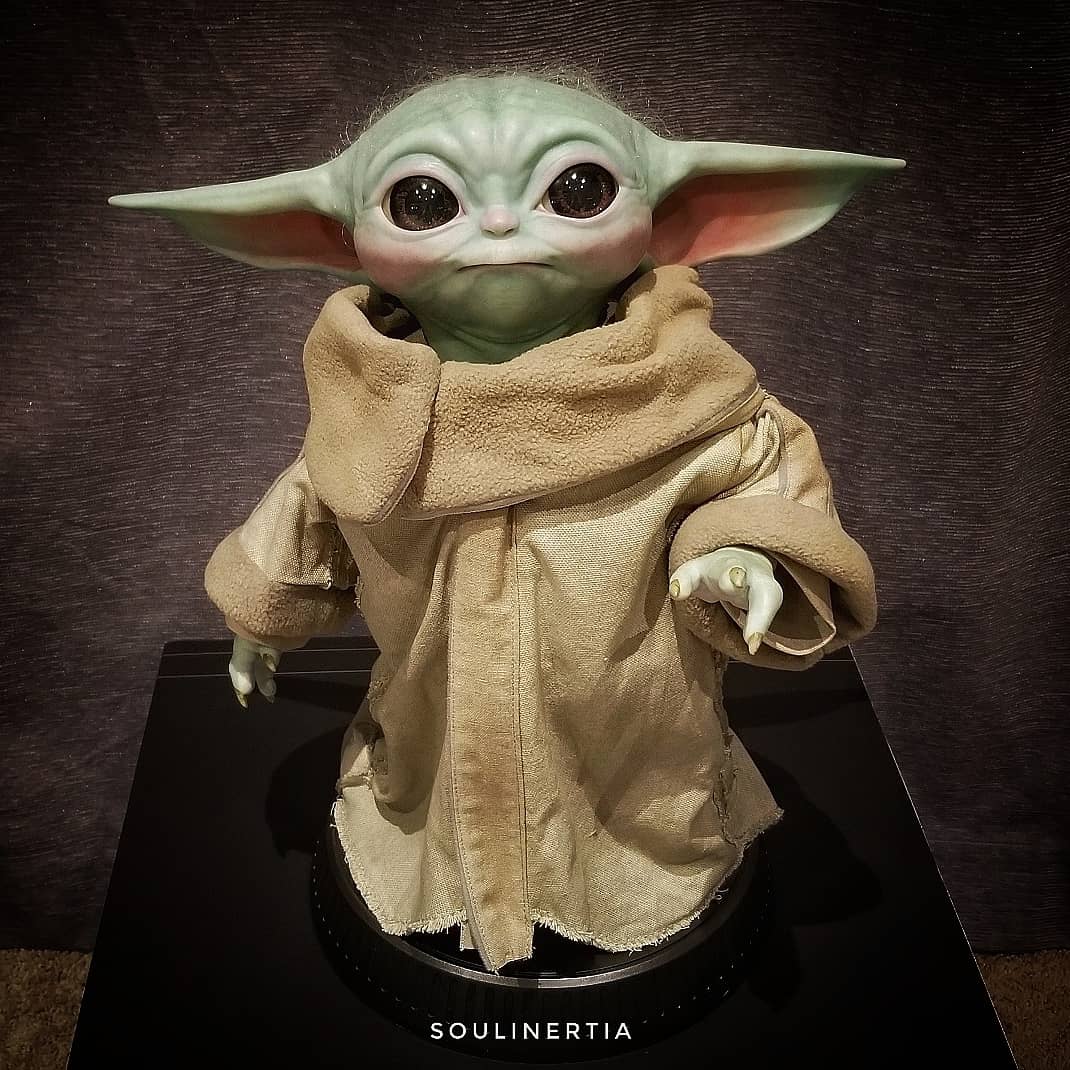 I'll just start off by saying I am very happy with this little guy just as he arrived in stock condition. I pre-ordered pretty early on and I'm so glad that I did! If your on the fence about it, these mods might be what pushes you over the edge.

The main feature I wish Sideshow would have included, articulating arms! There are so many key scenes that you just can't pose him in. So the first thing I did was attempt to take him apart. There are six screws in the back which allowed me to pry the body apart just enough to get the head off and see how he was put together. This ultimately was an unnecessary step. The arms and legs are firmly glued on and go over the body halves in a way that won't allow you to take it apart. I spent about an hour trying to get them off to no avail. Finally in an attempt to pry them off with a flathead screwdriver one arm started to break. At this point, there was no going back. (Fair warning, this mod permanently alters the statue.) I decided to go ahead and keep turning the screwdriver until the arm broke off fully. It actually came apart quite easily. 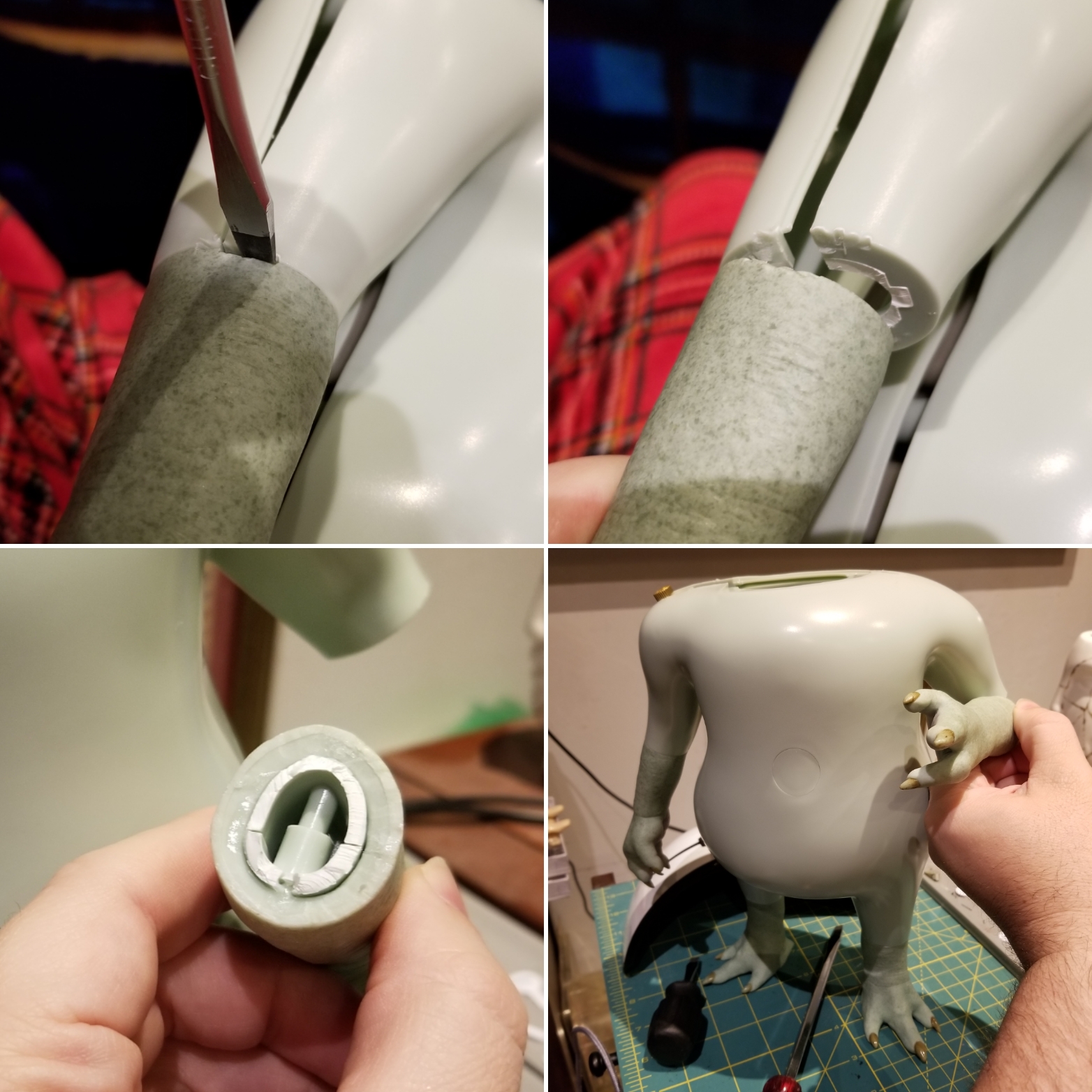 You can see where I'm going with this. Originally I thought about replacing the entire body, but then I thought of a much easier way. Why not just add some wire elbow joints!? 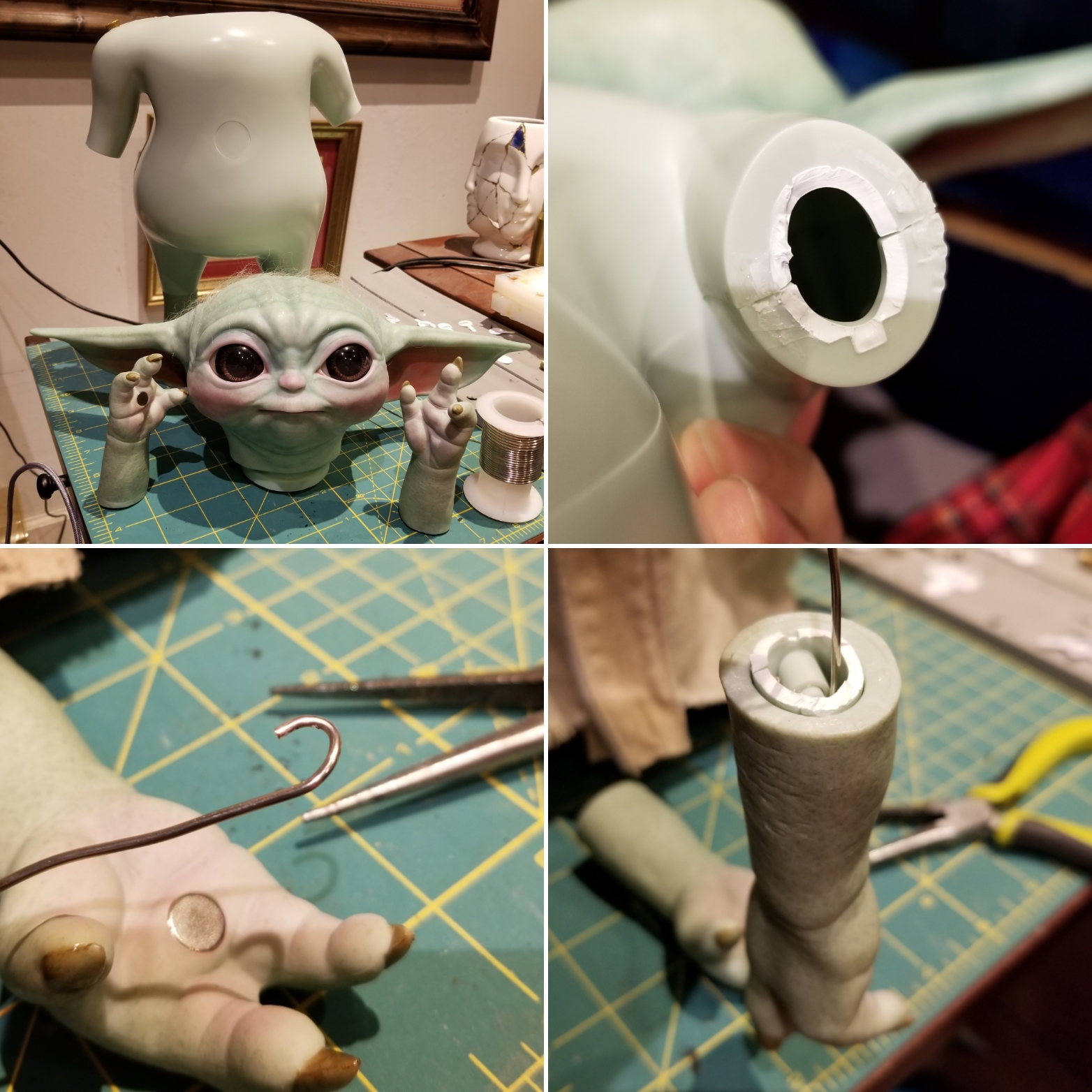 I used some 16ga wire which I hooked the ends of with a pair of pliers to go around the supports inside. Then I just hot-glued them in place. 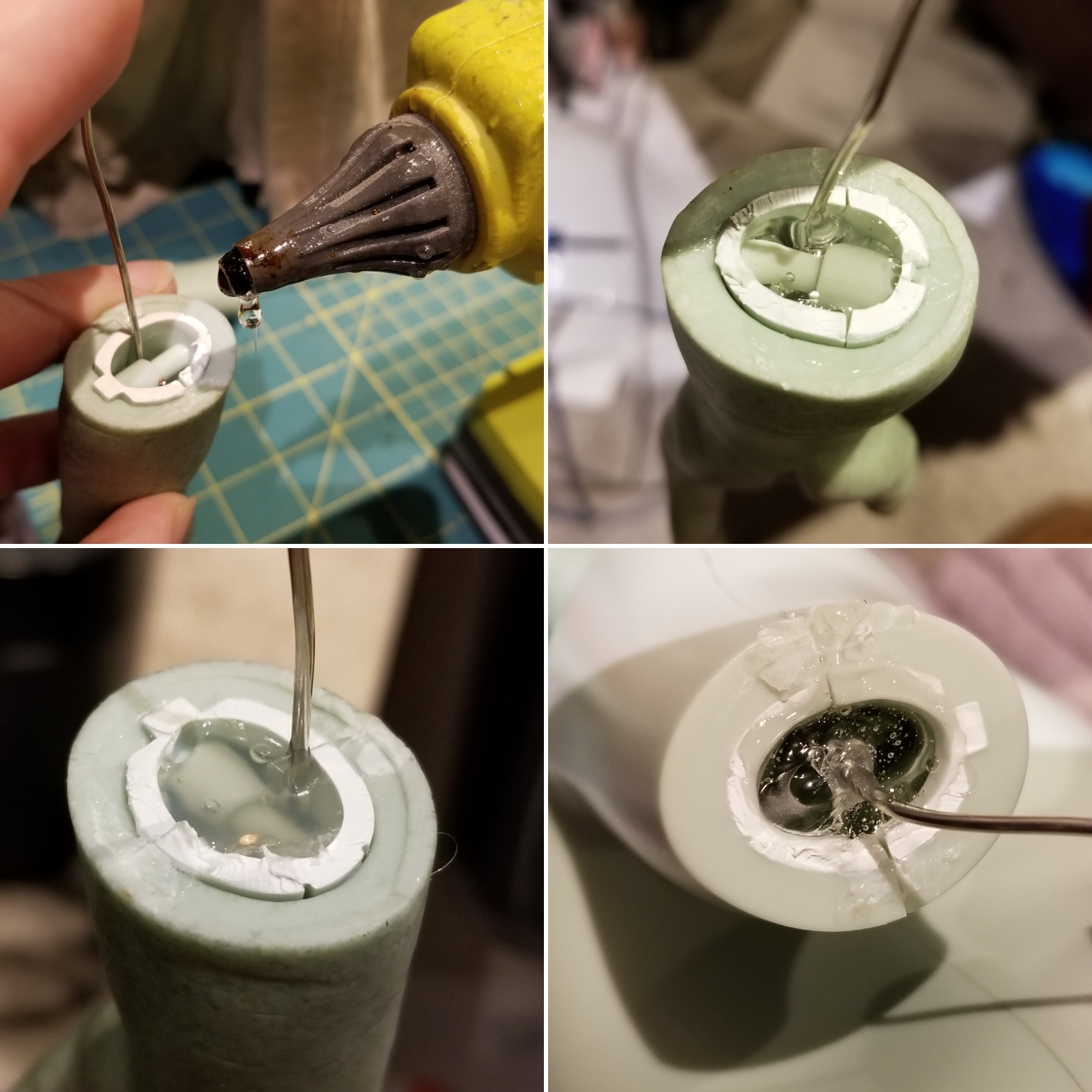 I measured out the wire to a lengths that would allow him to hold, oh I dunno . . . A cup perhaps? (something I'll be working on in the near future) 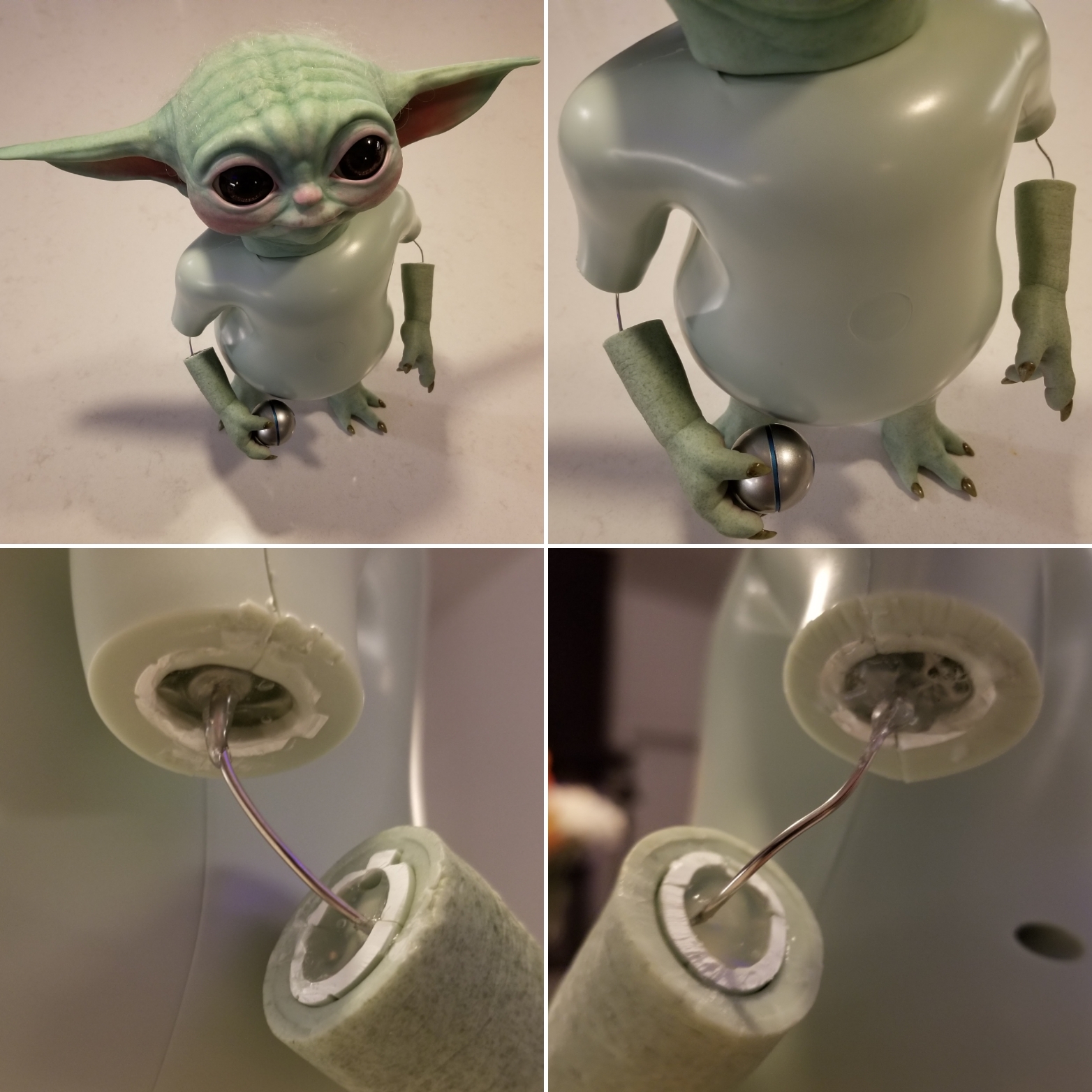 It's pretty rudimentary really, but it works! I didn't bother cleaning up the edges because I knew it would be covered with the garment. If you plan to do this mod, you could use a dremel with a cut-off wheel for a little cleaner look. Anyways, here is the final result. I just have him holding a little silver cup as a placeholder until I get my more screen accurate one finished. I want him to be able to hold it with both hands. 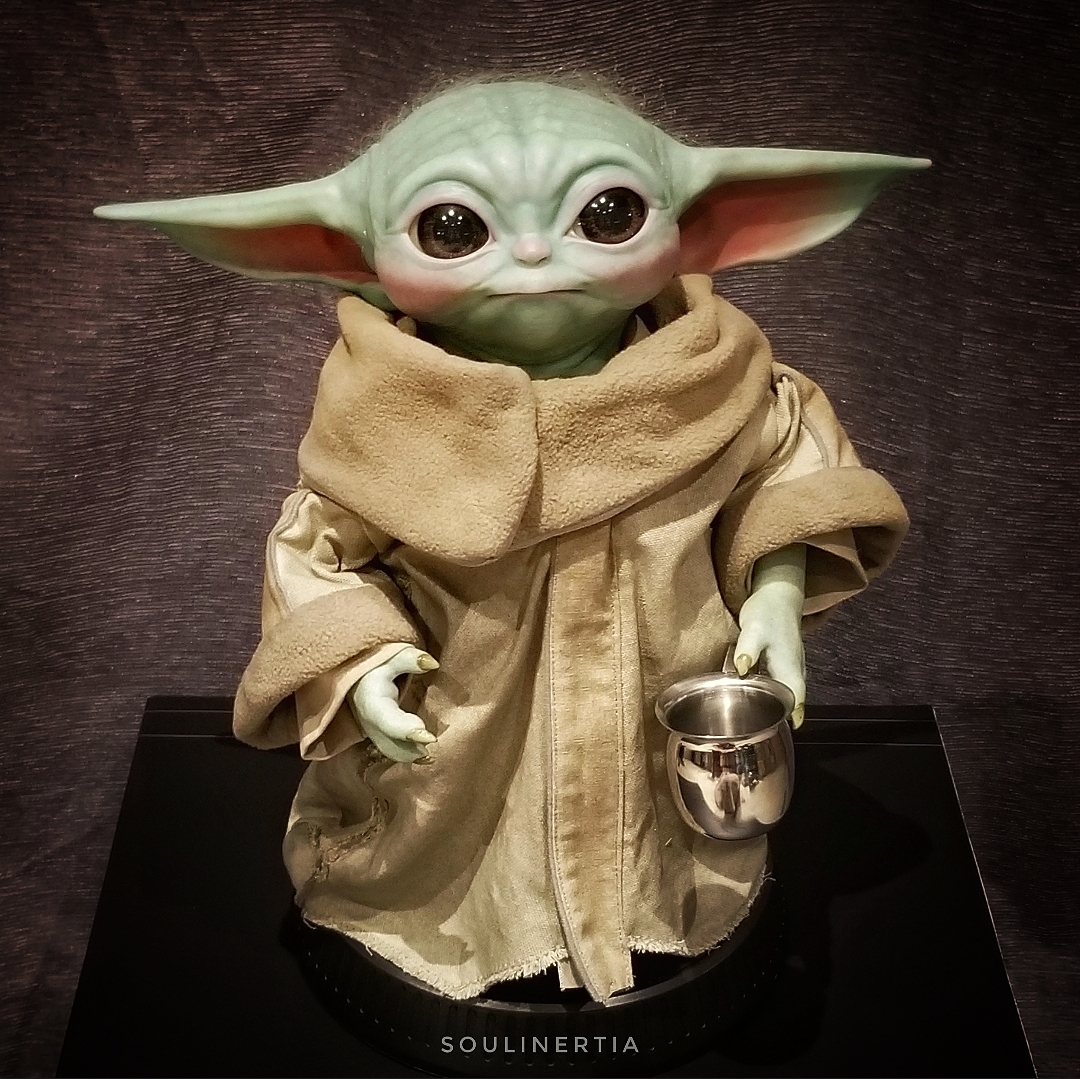 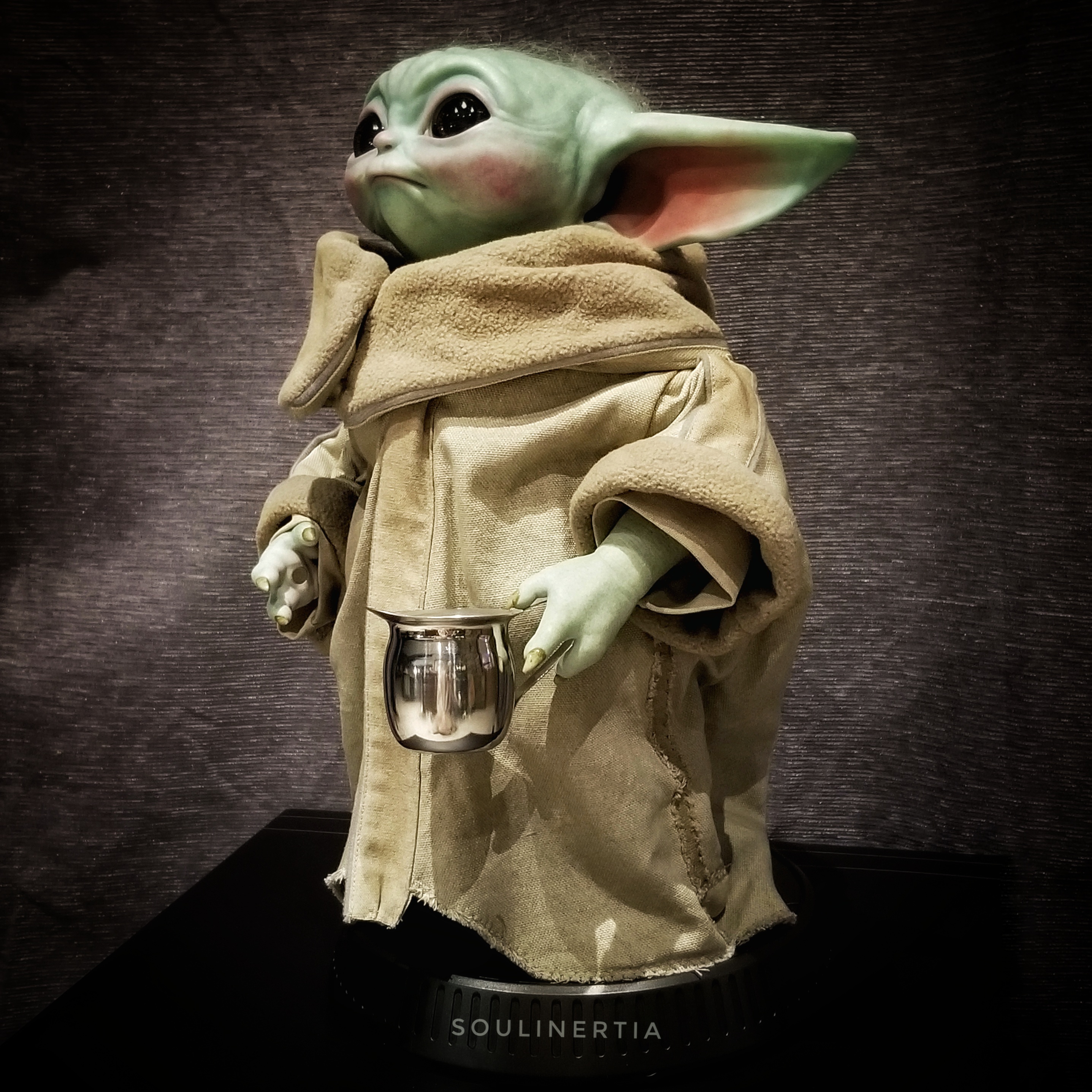 So tempting to do this, lol!

RPF PREMIUM MEMBER
Next thing I wanted to do was add some hair to the ears. I think his head is made of resin. Too hard for punching hair. So I just glued some wool to them. 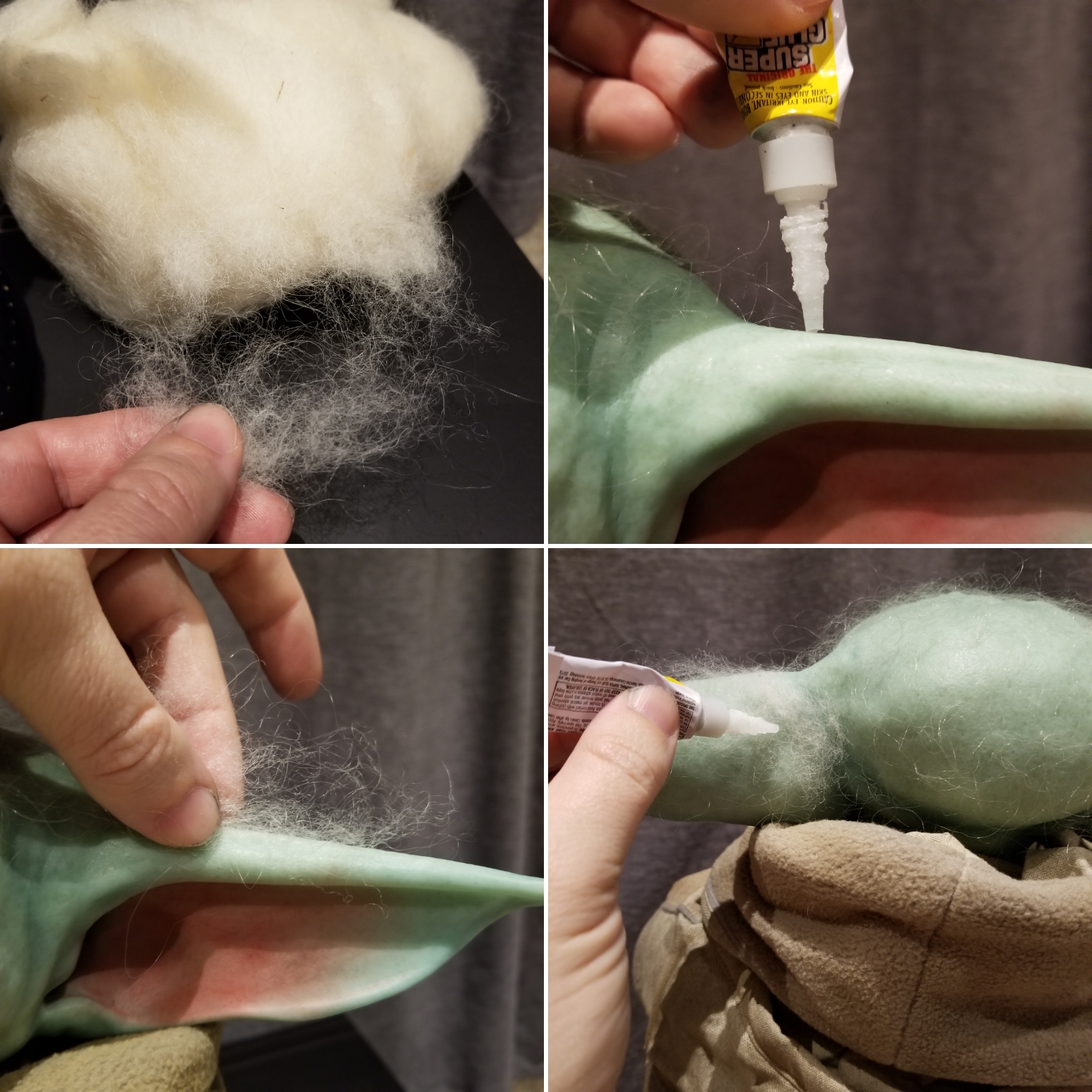 First I pulled a very small amount of wool. Then i made a few beads with superglue along the top ridge and pressed it on. Then worked my way down the back of the ear with some more glue. 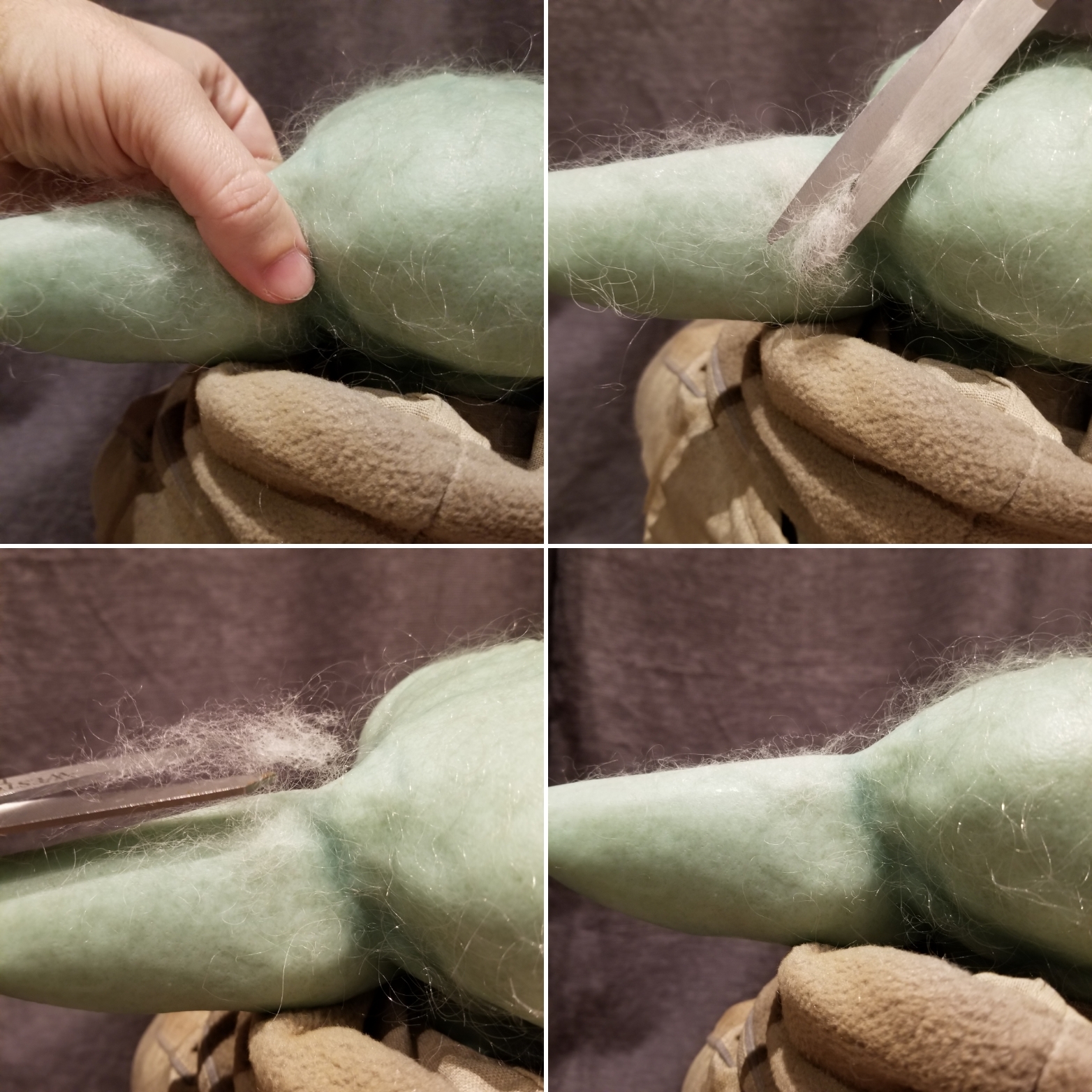 Pressed on more wool, pulling it to cover more area and then trimming the excess with a pair of scissors. 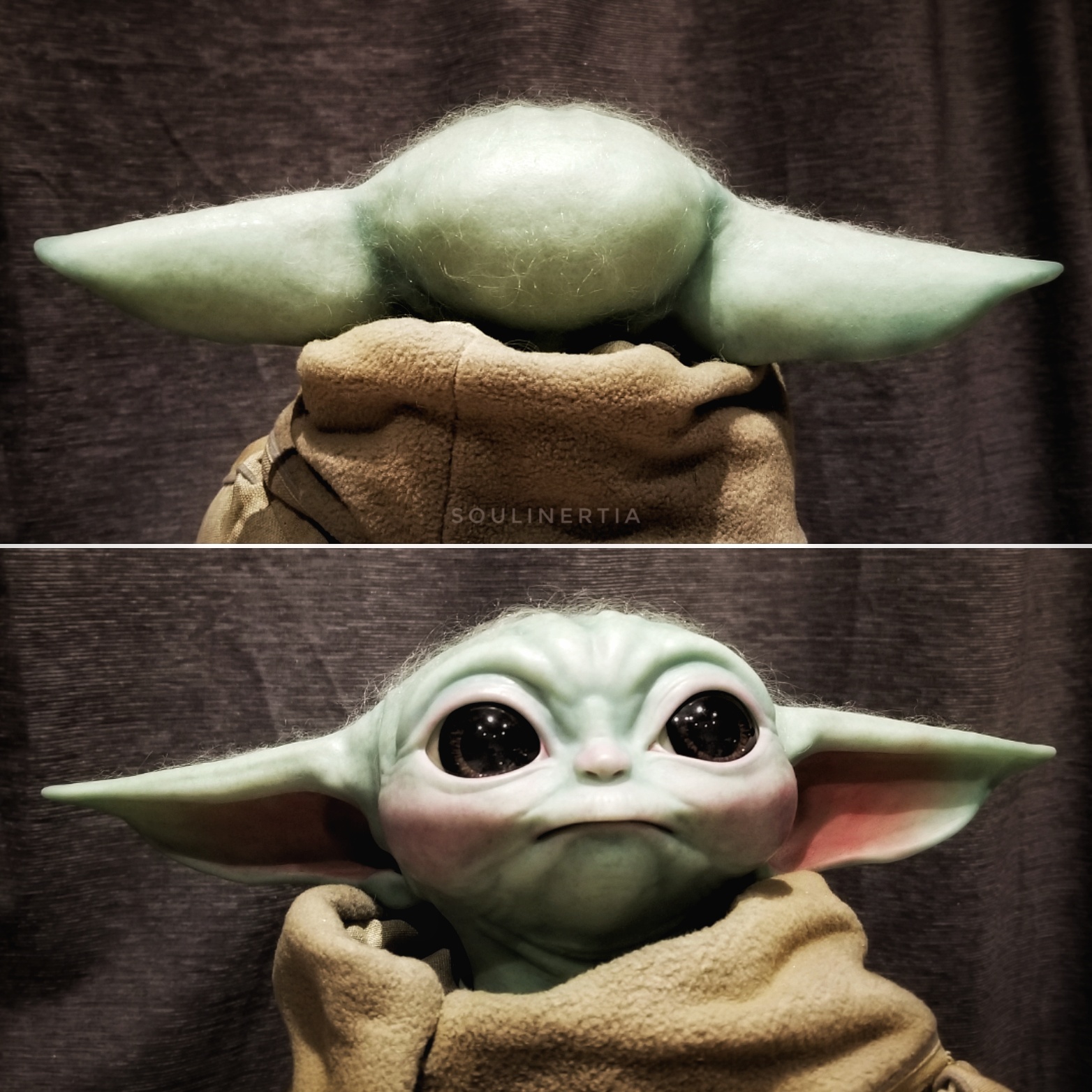 I also trimmed some of the longer fly-aways on the top of his head.

The hair on the ears looks great!

You did great with the mods here and there gotta love the hair mod. Your right Sideshow should have gone with articulating arms for key poses. Look forward to seeing more your mod ideas.

RPF PREMIUM MEMBER
Clever work with the hair! I have a plush baby Yoda from Costco that honestly looks pretty great for $20, but there's no hair at all. This looks like a great way to add some. 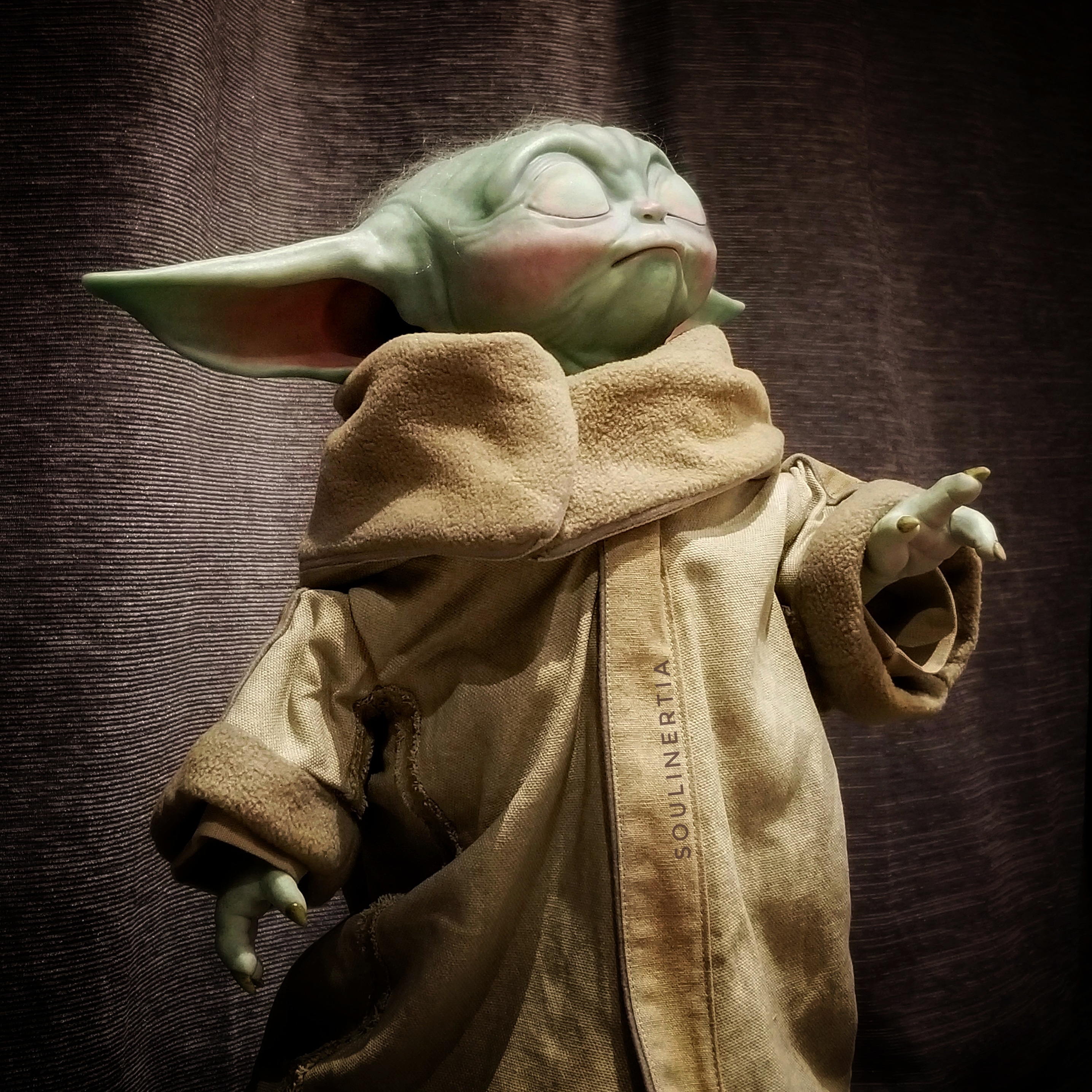 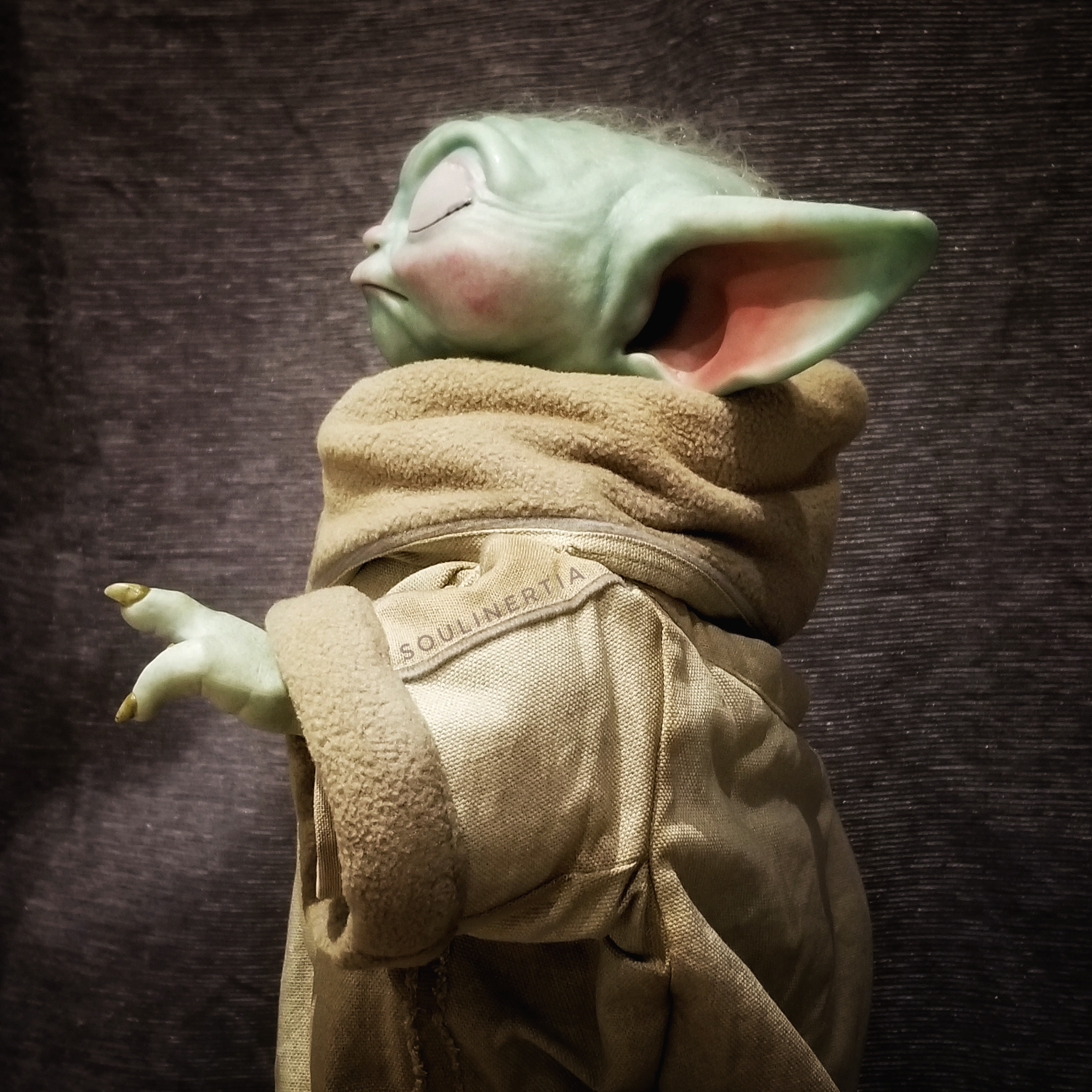 if the head is made of resin and too hard to punch hair how is the sideshow hair attached?

they say it's punched don't they?

I love it using the Force pose!

if the head is made of resin and too hard to punch hair how is the sideshow hair attached?

they say it's punched don't they?
Click to expand...

Yes punched hair in the YouTube video link below there is a small section where you see the hair being punched in.

wow, you got balls of steel to mod a expensive item
and you done a amazing job

got few questions
do you think the glue used in the hands/feet is very strong? do you think if getting the hands/feet hot can be removed without doing no/minimal damage?
How were the eyes attached to the head, by the inside? And are they glued in place? I noticed not all Baby Yoda's eyes are in the same postion
I wonder if one can move the eyes if not glued in, and just held in place by tension

enterprise0216 said:
Yes punched hair in the YouTube video link below there is a small section where you see the hair being punched in.

Which cheaper range Vader ESB helmet Is the most accurate? (JMC, Portumac, SPFX ,others)
2