I have fallen in love with Rob's Samurai Hunter Sketchs. IF you have not seen them, go search his username and check them out. Outstanding work. I have to thank him 1000% for the insirpation.

For a few reasons I have B line from doing the Boar Suit and have started this suit. I will tell the other reasons in due time. Working on some fun challenging things lately.


Here is Rob's Sketch for reference. 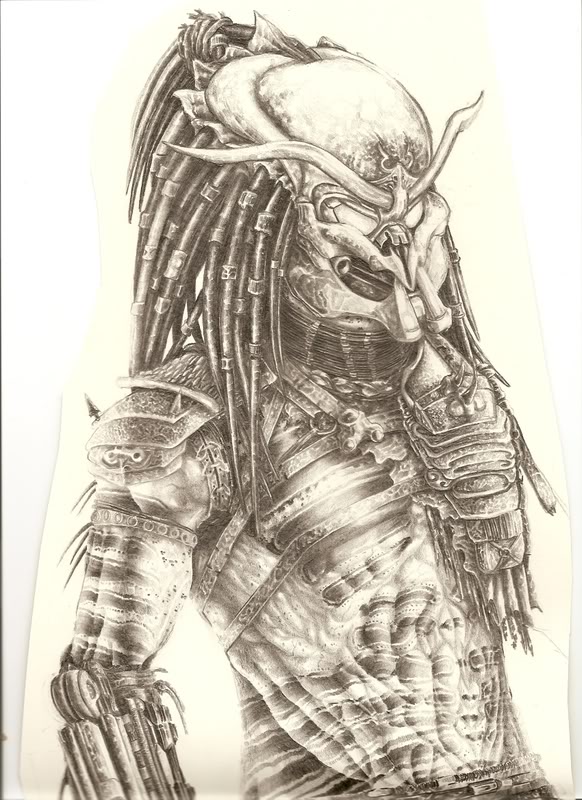 I shortened the name Rob gave him to Shinto.


Here are the pictures of the paintjob. All done with FW inks and an airbrush. Nothing else. 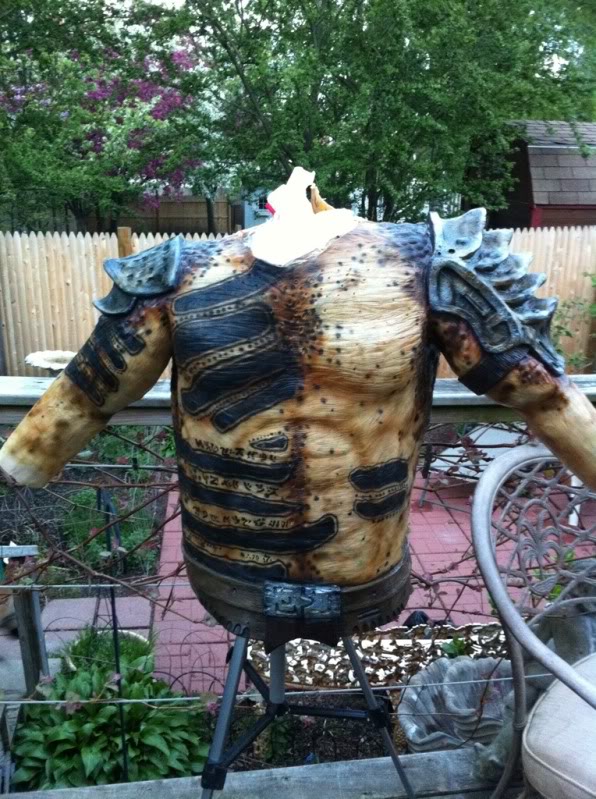 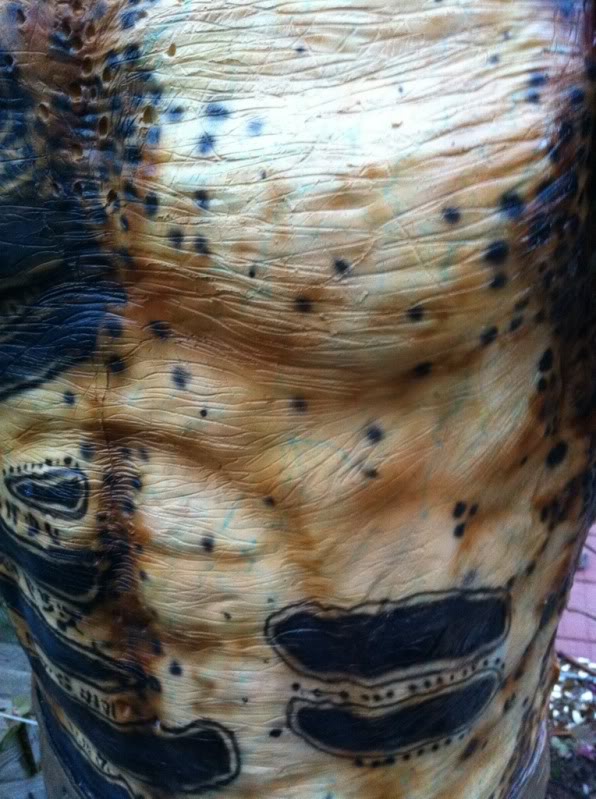 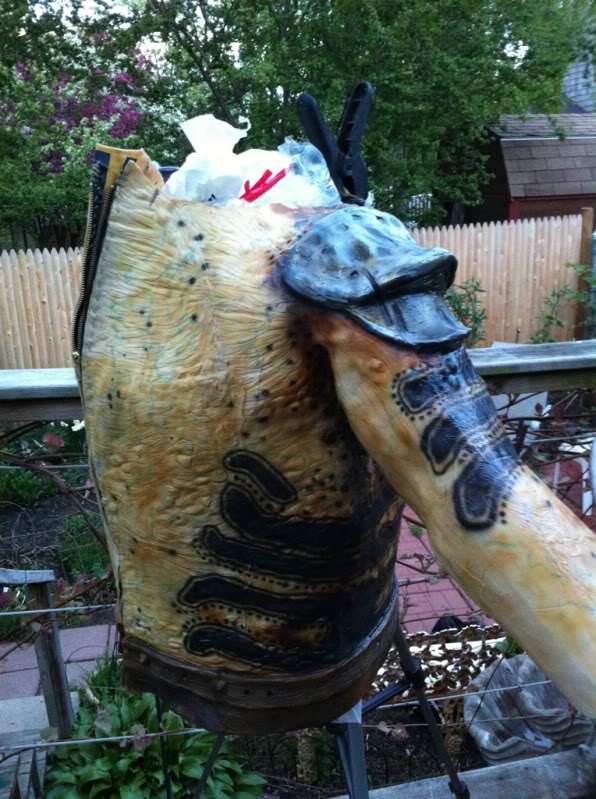 Concering the Tattooing, When I first saw the sketch I interpreted the skin patern as Tattoos. When I spoke with Rob he told me that was his regular skin patern. So I decided to go with my initial interpretation and I embelished it just a tad. I wanted the tattoos to look slighty weird and purposefuly made them weird shapes and such. I wanted the tattoos to look like an Alien did it. If that makes any sense.

Here is a mock up of the chest armor. It will be adjusted alot. But that is the general idea. 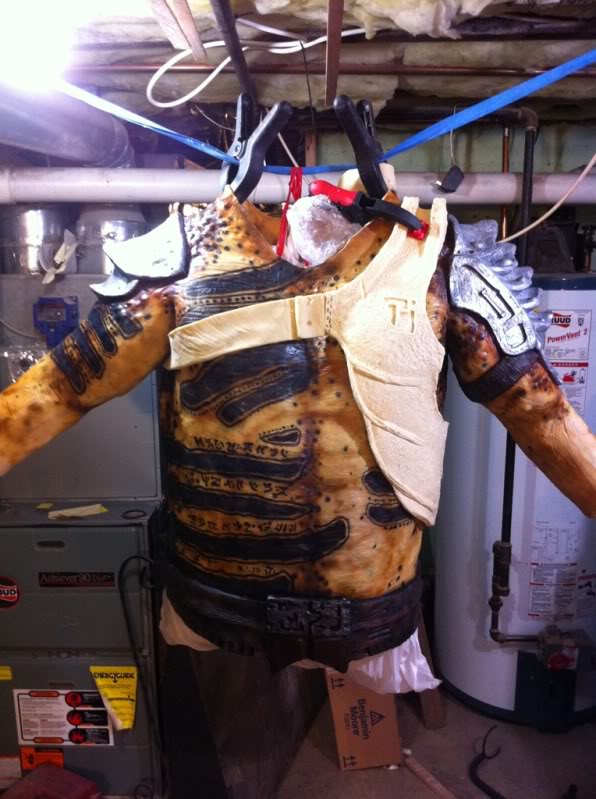 Damn Gene that's already shaping up to be 1 hell of a build. Rob's drawings are simply incredible so seeing you put your twist and hand at making 1 into a suit will be great. Best of luck with the rest of the build, I'll be watching this 1 closely

I really really like the tattooing. Very very nice.

Damn Gene,you guys ain't kidding.....that is just awesome, I love the colors and the tats are sick... can,t wait to see the headpiece on that mofo

like the tats on the skins, what mask are you thinking of using?

I don't mean to derail from the Samurai thread here, but since you wanted to see a set of skins with tribal tattoos, here's one that biggunns painted back in 2005 and is currently owned by Moose Matson. 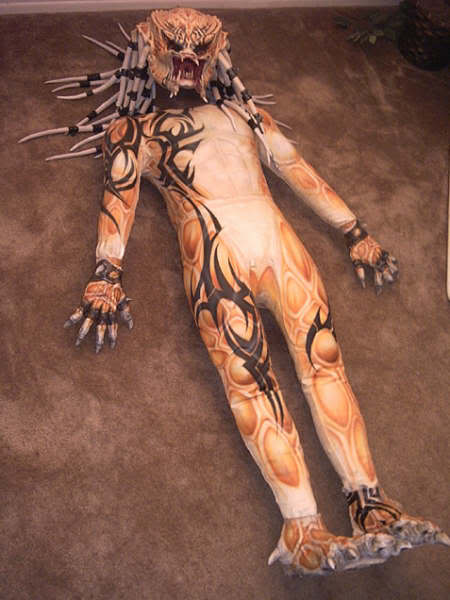 Man it's so life like. Some serious painting skills you got there. Crap! When will I get better.

Damn Gene, that's a very promising build.
Bovine13 did a great interpretation of the predator-samurai amalgamation.
Your paint-job on the skin is already eye-candy, I`ll watch this threat.
Keep on the great handcraft ...

holy **** on a stick Gene!! you have made my day with this post!
I'm going to be watching this one closely.
way to go bud!

this is gonna be uber badass...another samurai hunter comes to life!!!
U

hahaaaaaa wonderd when you would break and post photos, top job buddy.

what does it say on the writing above the tats?

Well hot diggity! Another Samurai Pred coming to life...nice! I am looking forward to watching this build. I look even more forward when my Samurai and yours can hunt the Con floors together. Looking great so far Gene.

This is going to be sick!

I love the the tattoo concept. It's something I've thought a bit about, but I really like the way you've executed it. Can't wait to see more.

Bovine13 said:
I am looking forward to watching this build. I look even more forward when my Samurai and yours can hunt the Con floors together. Looking great so far Gene.
Click to expand...

Seeing the two suits together would be freaking amazing.

THankyou so much for all the support! It is nice to read, It took 8 HOURS to paint this.

The writing above the tats is all random Pred Glyphs/Japanese style symbols. All just free handed on the spot with the airbrush.

Scott, I think we may be walking the floor together this coming Dragon Con if all goes well with the suit. I may have to sleep in my car looks like tho, hotels seem to be sold out and I do not have 300 bucks a night.
I really want to go, I have been saying I will go since I joined this place years ago. I think its about time.

I am going to tackle the leg skins this Saturday all day. Doing roughly the same idea. Small tats ont he thighs etc. Silver armor.

Any suggestions? Any ideas are appreciated. Lets make this a group effort.


Oh and Join my Facebook page. I put more pictures up there as an online Portfolio.