A question to the community...

I recognize that it's considered to be an inappropriate practice to resell a 3D print of a model that was designed by someone else. That makes perfect sense to me.

But the finishing and weathering process of a 3D print can be a really big job of its own. Between the gluing, sanding, filling, painting, and weathering of a 3D print to make it look like the actual movie prop, a lot of skill is applied after the print itself. Is it still considered to be a "faux pas" to resell a fully finished prop version of someone else's model at that point, if I'm doing all that finishing work?

RPF PREMIUM MEMBER
I think providing you reference the original creator of the model and have their permission, what’s the problem?

It likely depends on the license agreement for the file. Was it explicitly for personal use only? As JakeySankey630 said, just get the creator's permission, then you have nothing to worry about. Everyone will likely have different terms for selling items made from their model.

Just because someone 3D models a prop from a movie, it doesn’t mean they own the rights to that prop. They’re still recreating something without a license. So you’d be selling an unauthorized copy of an unauthorized model.

I‘m not sure if that’s right or wrong, it’s just my opinion. I’m asked often to sell copies of parts I 3D print, and I always say I print parts simply as a hobby and don’t own the rights to the copyrighted material.

RPF PREMIUM MEMBER
Yeah building props is a lot of work, but so is 3d modeling. A lot of these guys spend countless hours scouring through screenshots to make the most accurate model ever, share it for free for other enthusiasts, only to have a subpar print pop up on eBay or Etsy without any sort of attribution to the designer.

This has led a good number of people to stop sharing and even pulling their designs. As someone stated it’s not their original intellectual property so the ethics of the situation are definitely blurred, but the overall impact tends to lead to burnout and resource hoarding.

IMO it’s better for the community as a whole to always make the effort to contact the modeler if you intend to use their work to create and sell props. In my experience they’ve always been gracious and thankful.

RPF PREMIUM MEMBER
Always contact the modeler. If you don’t have permission to resell multiples, then you can save yourself a lot of time by not doing putting in all that work finishing pieces you can’t ethically sell.

If you download it from a website, check the license. More than likely it only allows you to print it for your own use, which doesn't mean printing it and reselling it, regardless whether you put a lot of work into it or not.

What you propose doing is called digital recasting and it is very much frowned upon here. Regardless of whether you buy or download it for free, it is still protected by a license on whatever site you downloaded it from. Check the rules and the license.

As BonesAreDollars mentioned, these 3d artists have put a lot of work into their models and either post them for people to download either for free or for a price. They didn't design them for people to suddenly start up businesses for printing their work. If everyone did that, then nobody would buy their stuff or credit their work, which probably would mean that they would no longer design anything else. In that case everyone suffers.

The original post seems to be about selling a single item, not making a business of cranking out multiples.

If it is indeed about starting a business, then I agree that the original 3D modeler should be consulted or else there is a line being crossed.

If this a one-off item, then I would view it as he is rather selling his service as a builder - just like someone who were to buy and sell a commercial model kit and build it up. It would be appropriate to say what the kit was; or in the case of a 3D model - credit for who drew the file. The artist could get more buyers for their file that way.

What we do here is a bit "In the Grey", so giving credit where credit is due is the least one can do.
S

What would the ethics be around commissioning someone to paint, finish, etc a 3d print purchased from a 3rd party?
To me it is a similar argument to the above.
The paint scheme was designed by an artist and is now being copied.
My view is that prop replication is a 'grey area' that is largely ignored by studios etc as it helps generate sales of official replicas and toys and interest in their properties.

Duncanator said:
The original post seems to be about selling a single item, not making a business of cranking out multiples.
Click to expand...

Yeah. It always starts off with one.

The only way this would be ok, is if each model was downloaded by each customer, then passed to the person that would be printing/finishing it. This way, the artist gets funds to compensate his work. Unless of course, you have express permission from the artist that you can do that.

That would be ideal.

RPF PREMIUM MEMBER
I was contacted about making a commission of a suit that was mainly 3d printed.

I immediately asked the creator of the files (that I had fully credited in my build) if he wanted me to include the costs for his files as the CC license was not all clear.

TazMan2000 said:
Yeah. It always starts off with one.

I think you are right.
Since the TITLE indicated plural, it may be many more to come.
Unless the question is in general terms and applies to all "licensed prop" making replicas......

RPF PREMIUM MEMBER
Thank you all for the feedback! I was speaking of a multiple-props situation, but not assembly-line style. More like, I'll make 2 or 3 to help finance the costs of building one for myself.
That being said, keeping in mind this is a form of "digital recasting" and that the creator should be contacted sounds like the best approach to take.
And this highlights the benefits of simply converting screen-accurate toys (such as blaster toys). Can't go wrong with those!
Thanks again all!
Last edited: Aug 29, 2022

I've seen my files turn up finished on other prop builders fb pages. Did they contact me, did they reference me? .... nope. That's how it is these days, the perception that just because it's on the internet and it's downloadable then I can do what I like with it. Screw the 3d artists time and hard work to reference and research the original prop.. don't get me started on recasting ! Digital recasting is a huge issue ......
Last edited: Aug 29, 2022

RPF PREMIUM MEMBER
I have done a lot of work on 3D models. I used to share them freely... until someone started a small "business" selling props made from my prints. I pulled my stuff from every site and don't give out or sell my models anymore. If you get something on thingaverse most people say for personal use only. Not only are you screwing the creator by selling multiple, if you're successful the license holder can come after the modeler. This is just my opinion as a modeler and as someone who has been burned (more than once).

13doctorwho said:
I have done a lot of work on 3D models. I used to share them freely... until someone started a small "business" selling props made from my prints. I pulled my stuff from every site and don't give out or sell my models anymore. If you get something on thingaverse most people say for personal use only. Not only are you screwing the creator by selling multiple, if you're successful the license holder can come after the modeler. This is just my opinion as a modeler and as someone who has been burned (more than once).
Click to expand...

Proof above of how digital recasting screws everyone.

I suppose there is always going to be a debate.
For example, at one point in the past, VOYAGER used a "found item" to make a prop HOLOGENERATOR
from The MARS drink container.
.
So, now everyone who wanted a "replica" of this prop could buy the toy in the store, as well as modify it
for there own needs and/or sell it as a modified Star Trek Prop.
.
But the tricky part is that it wouldn't sell at all if it didn't have that one Voyager Episode to give it "saleability".
This particular prop would only sell because of the episode it was used in "on screen" and ONLY because of it.
.
I too bought the toy container, modified it, painted and sold it, but it wouldn't have sold at all if it wasn't
seen on screen in the first place.......
.
I did not have to "model" it myself from dozens of screen captures to be reproduced in order for it to be sold later.
.
Then came the 3D printer and what it is capable of doing for those that don't have the skill of hand modeling, casting
and selling (old school).
A little 3D modeling and voila!
But, it still remains that it wasn't my original design.
In this case it happened to be a store bought toy that looks like what was seen in a television show.
.
I did eventually 3D model "the toy" since I had the original one and I could measure and replicate it, but at the end of the day, it was
only given "prop" credibility/merit because of someone else's idea on VOYAGER.
.
If I choose to, the STL files could now be shared..........but at the end of the day, not my design.
. 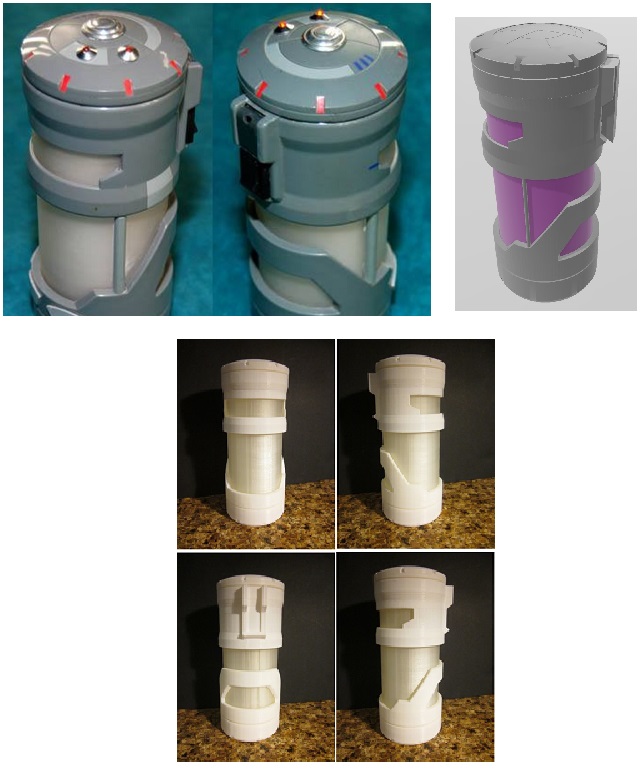 .
The tricky part is who's model and design is it to begin with??
Who was the "original" designer.....
It was never my design to model and replicate in the first place and so a "replica" is
copy created without the ok from the original creator (prop maker from the show or movie).

Found items do add an interesting point to replication. How many props are found items and how many are an amalgamation of found items?
What about original designs using greeblies, like Star Wars?