RPF PREMIUM MEMBER
Can anyone get me some shots from the Doctor Who episode that aired tonight on Scifi, The Long Game, Suki's Gun? Very cool ggun and i wanna start workin on one. Thanks.

I'm 90% sure it's based on a S&W semi-auto, possibly with Houge grips (I'll explain with a pic later).

RPF PREMIUM MEMBER
woo, exactly what i wanted, thanks.

RPF PREMIUM MEMBER
OK, here's a direct link to the caps, and a pic showing my thoughts on the base gun.

I believe it's some version of a Smith & Wesson semi-auto--note the matches with the slide mounted safety, and the area around the slide release.

I'm guessing it's a resin cast--the finger grooves seem to match up with the Hogue grips, but the TV gun seems to have them molded into the frame with a separate "grip" that looks like the second set of grips pictured (but without the texture).

This is why I think Hogue grips were involved---on the grooveless grips, the angle of the Hogue logo is a close match for the angle of the sawn off grip section. Since it's a fairly unergonomic design, I'm just guessing it was based off the logo to "look cool" :unsure

I bought a couple of cheapy toy guns from KAPOWWE to convert, and just tonight noticed that the little "tube" above the grip on the toy matches the same spot on the TV gun... 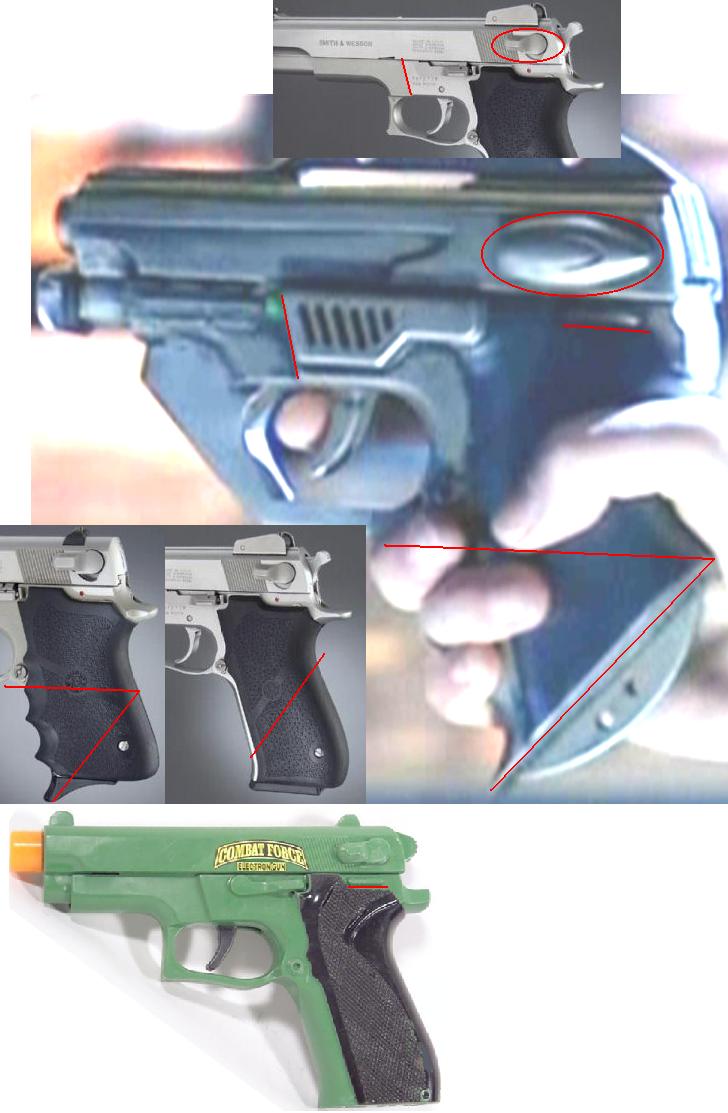 RPF PREMIUM MEMBER
awsome work. I was just looking on Kapowwe trying to find something close..didnt see that gun, guess il have to look again, everything they have seens out of stock anyway...definetly a friggn cool gun.

-just looked, they dont seem to have them anymore

RPF PREMIUM MEMBER
Thanks--now if I could just find the time to work on it. :lol

HERE's the page, but they're sold out--no idea if/when they might come in. You might email them and ask--they're good people

You might be able to find something similar elsewhere, but since they've sponsored the BBC's custom blaster contest for the last 2 years, I like to try and help them out when I can.
J

I'm pretty sure you can easily find those guns at KB toys. At least everytime I've been in there over the past few years I've seen them there. Usually on sale for about 9.99.
Jon

just been to the dr who exhibition
in cardiff and took some pics of that very gun
mail me at paul.jeffreys1@virgin.net for the pics
they are to large to post on here

p.s. just posted the pics to kylash and another rpf member
who is going to resize them and post them

RPF PREMIUM MEMBER
Very cool, thanks for sharing the pics.

On the show, the gun looked more of a grey color, your pics have it more towards a bronze look--what color's closer to what your eye saw?

I'd swear that's made from a toy gun--in the 3/4 pic, you can see how wide and "fake" looking the trigger is (even has a seam line on it)

RPF PREMIUM MEMBER
yeah, its nice to see the details on the other side too. Also notice the pieces above the grip are open on the front, like vents.

RPF PREMIUM MEMBER
Thanks---the lighting in the scene is so intensly "blue", I figured the color was off.

it is almost a bronze colour
with dirty areas like mals from firely but not as much bronze shows through as his
and then some parts like the top ridge go more towards the grey
its a strange paint job but works really well
sorry i cant be more precise
i think the best thing is to paint as you feel best represents the screen image
[/b]
Click to expand...