This is truly an awesome prop, and one of my all-time favorites. There were many Mjolnirs made for different purposes. Some were made to be easily held while at rest, others to throw, and there are heavy (about 14 lbs) ones that are meant to make Chris' arm muscles visibly flex on camera as he wields it. There are also some that are bendable and even "throwing "hammers with no head (which was added in post).

The reason I claim this one is screen used is because the on-set source specifically said it was. I doubt it can be screen matched, though.

The head of this particular hammer is made of dense foam rubber. The top is inscribed with ancient runes, while the edges feature intricate Nordic knotwork design. It is painted and weathered to resemble hardened steel. The handle is made of solid material wrapped in firm rubber painted to simulate leather, with raised decorative silver chevrons which also serve to improve grip. A stitched leather strap is attached to the pommel which features more Nordic design. While showing light wear from heavy use while filming, it remains in excellent condition. 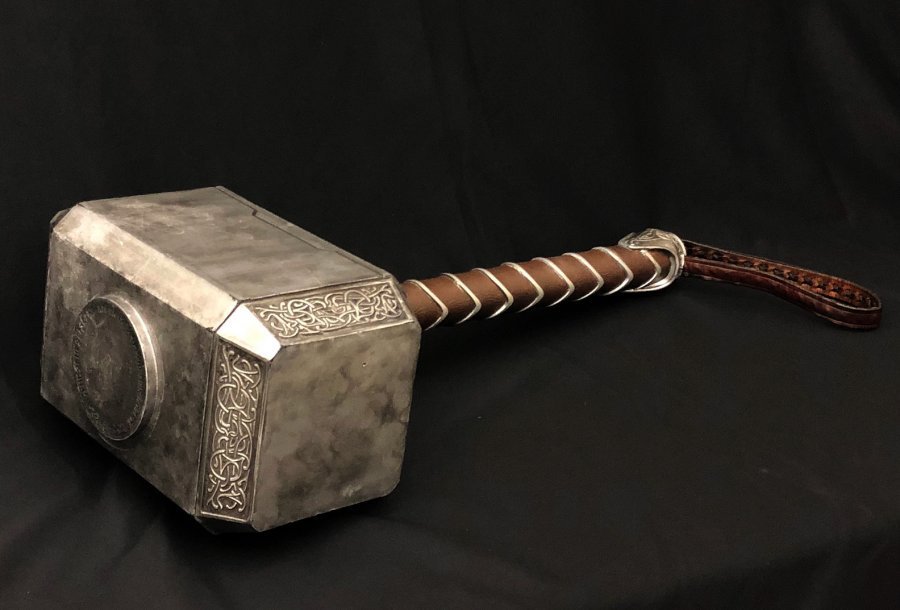 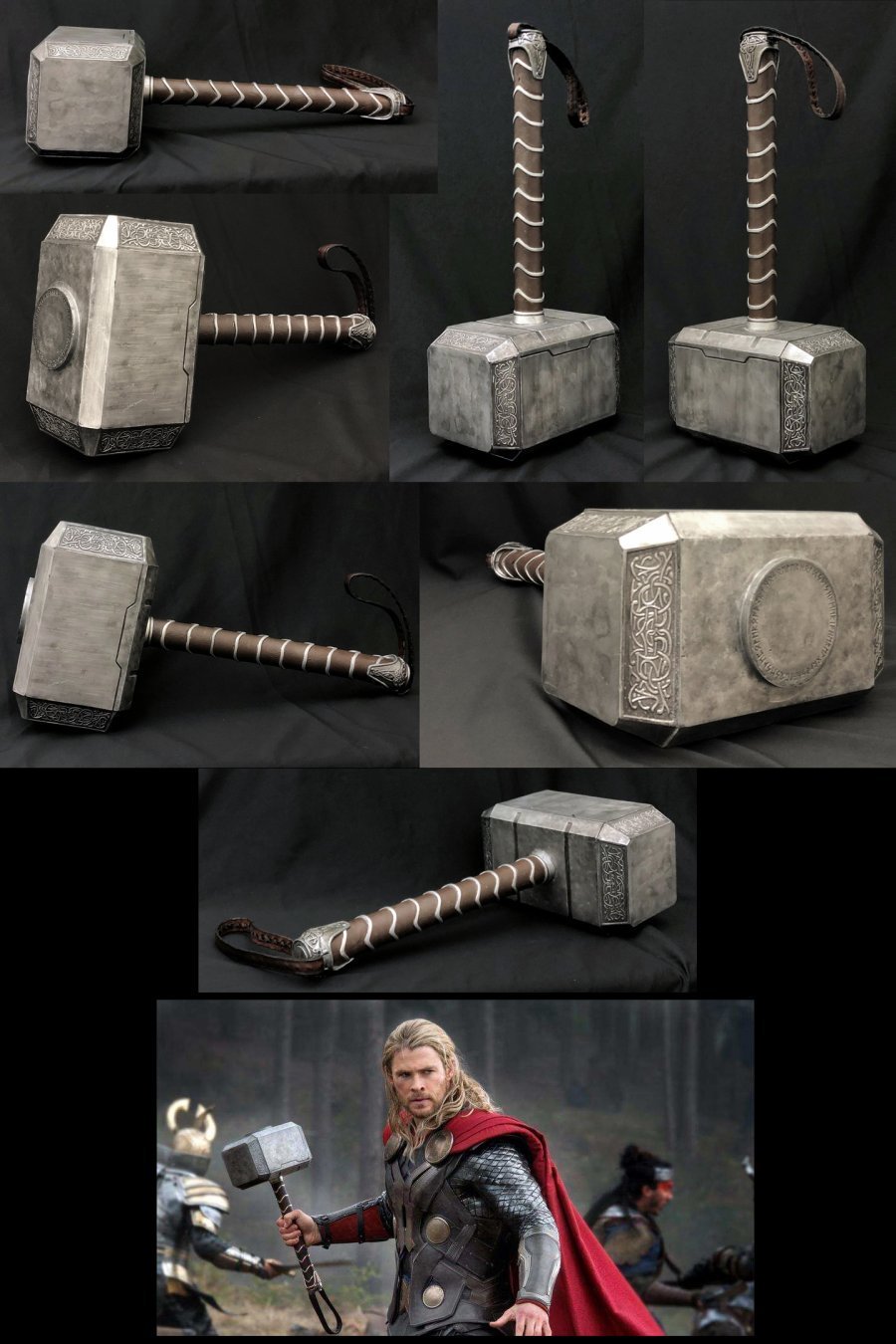 RPF PREMIUM MEMBER
You're a lucky man to own such a cool prop. The courier must have been very worthy to lift the package to deliver Mjolnir to you!

renaissance_man said:
You're a lucky man to own such a cool prop. The courier must have been very worthy to lift the package to deliver Mjolnir to you!
Click to expand...

I was told they tried 42 different delivery people before one could load it on and off the truck. Then she had to bring it inside and put it in my display case because I was also unable to lift it.
L

RPF PREMIUM MEMBER
Do you own it?

Loneken said:
Do you own it?
Click to expand...

Yes--for 11 more days. It's currently up for auction. I have more than one, though, so I won't be left hammerless, lol.

Tom said:
Yes--for 11 more days. It's currently up for auction. I have more than one, though, so I won't be left hammerless, lol.
Click to expand...

Up for auction you say. Which one?

Seeing from your story it came from a production member, shouldn't this be a private piece?

AvZ said:
Up for auction you say. Which one?

Seeing from your story it came from a production member, shouldn't this be a private piece?
Click to expand...

I made sure I got permission from them before I put it up, along with the other items. The auction link is below.

Tom said:
I made sure I got permission from them before I put it up, along with the other items. The auction link is below.

Of course I find out after throwing money at the Propstore auction.

RhinoActual said:
Of course I find out after throwing money at the Propstore auction.
Click to expand...

The upcoming one? Never pre-bid!

AvZ said:
The upcoming one? Never pre-bid!
Click to expand...

Maybe I will regret asking but why?
L

Tom said:
Yes--for 11 more days. It's currently up for auction. I have more than one, though, so I won't be left hammerless, lol.
Click to expand...

RhinoActual said:
Maybe I will regret asking but why?
Click to expand...

Alex can give his thoughts on pre-bidding, but I figured I would give mine too. I generally only pre-bid on items when I won't be available during the time it goes live. When I do that, I bid the highest I'll go, then hope for the best. When one pre-bids, it gives people a target and they tend to keep bidding until they have the higher bid, even if it's ephemeral. These people are generally not the most serious bidders, as those will surface when the item goes live. However, it still serves to unnecessarily increase the price. They can be high bidder at $300, or, if they're forced to go to $3000 to taste the nectar of being high bidder, they'll do that too. I would rather them stop at $300, forget about it on auction day, and have the chance to get it for less--just in case they and others forget about the auction or are unable to bid. This isn't foolproof, of course. Someone might have placed a giant absentee bid, and is going to win no matter what. But I just want to give myself the best chance of getting the item at the lowest price possible. Basically, pre-bidding gives others a singular goal--just outbid the high bidder. And that might end up costing the eventual winner more money.

Pre-bidding can also be awesome, because a lowball bid you place just might end up winning because others aren't there when it's active. Sometimes you wake up and find you owe ten large on stuff you forgot about--but you're happy to pay it because you were willing to pay significantly more.

RhinoActual said:
Maybe I will regret asking but why?
Click to expand...

The reasons why are inline with what Tom said. In my own words I'd say that by pre-bidding you are showing your hand. You show interest and when competitors see that they will pre-bid as well (thus raising the bidprice) and/or raise their live-bid max (thus raising the buy price). By pre-bidding you are forcing competitors to action. Everyone bidding with the actual intent to win (so the real buyers) knows the reserve and thus when someone pre-bids the competitor should know that he/she won't be able to win the lot at the reserve. So, a potential max (live-)bid will be raised by the competitor if he.she wanted to win at reserve. And thus you - as the pre-bidder - will have to pay more to win (thus it is costing you money) or you will lose (as by the raising of the max bid of the competitor it can go beyond what you want to bid). Either way, you are raising the price and increasing the chance of losing when you pre-bid.

Plus, and that I never thought about but comes from your remark, by pre-bidding you are in a legal and binding contract. Your money is in limbo (as you have committed, but have not won yet). If in the time between your pre-bid and the live auction another item you want (more) comes to the market you don't have the liberty to go for that item if your budget is already constraint by the pre-bid elsewhere.

The only reason for pre-bidding would not being able to bid during the live auction, either an agenda thing or that you are afraid your internet goes down. But even then, make sure you pre-bid as close to the live auction as possible. Meaning minutes or at most hours before a listing goes live.

Hench why you should also only bid in the last seconds of an ebay auction (via a snipetool) for example.

Don't be a thief of your own wallet and don't increase the chances of losing out.