I've been working on a scratchbuilt Fire Raptor. The main construction is done, and the assembled interior is painted, but I still have some detail to put on the outside before I can start painting it up.

The main build log is over at papermodelers.com, so I'll only post an excerpt of photos from the journey here, to keep it short and sweet.

Basically, I started with a template called "Fire raptor v3", which was apparently cobbled together from two other templates, one of which named "Fire raptor v2". I have been told that the original author is Alex Belyaev, who posts on the Warhammer Paperfabricators FB group.

The template is mostly accurate. There are some measurements that are clearly wrong when compared with the official Forgeworld model, but I tried to work around them as much as I could. I improvised a lot of detail, scratchbuilding the interior, engine intakes, wings, etc. using the template as base and extrapolating from there.

I added/improvised a fair number of moving parts on the bird:
* the rear ramp, top hatch can open, flaperons, wingtip exhausts and canopy are all hinged
* the two ballturrets can swivel, the canons can tilt, and the turret hatches are magnetized
* the landing gear are removable, and the covers can be closed
* the top section of the bird is removable, so the interior is visible.

She is built (as usual) from paper, cereal packaging, index card and chipboard, with various bits of plastic rod and bits and pieces thrown in.

The pilot and gunner figurines are all cast from a master that I sculpted out of greenstuff and poly clay.

Here are the pictures:

The model is structurally complete now, ready to be primed + painted.
The only missing piece is the attachment for the acrylic rod, so I can mount it in a flying position.

I know absolutely nothing about gaming but I have always love their aesthetic. Fantastic work dude!!

Looks great! Primer always brings it together... Get 'er done so we can see it...lol...

Chaank said:
I know absolutely nothing about gaming but I have always love their aesthetic. Fantastic work dude!!
Click to expand...

Hi Chaank, thanks for stopping by! Funny thing is, I've never played a game of 40k in my life. But the models and aesthetic fascinate me too. Thanks!

Cheers korben, it's on its way

Hahaha glad I'm not the only one

Thanks for stopping by everyone, much appreciated!

This is seriously impressive stuff - and a true scratch-build. Hats off to you!

My first scratch-build spaceship was made from a match-stick frame covered with cereal packet card. I had the same kind of upbringing - learning crafting skills from my dad. Can't wait to see it all painted up.

Thanks skiffy! I'm trying to "educate" my kids in the same way. It must be working, every time we finish a cereal box we have a discussion about who gets it for their crafts

I can't wait to see it painted up too, or at least primed. I only get a chance to work on it in the evenings, and I don't have a spray booth so I need a nice windless evening.

In the meantime I'm painting up the crew and other odd bits:

I've masked off the interior, using silly putty, masking tape and balls of newspaper, then proceeded priming the model.
The level of detail seems about right, I am happy with it.

Painting this is going to be interesting. I am excited about it, but I'm preparing myself for the long haul...

Nice! Any ideas or ref on a paint scheme?

Hey skiffy! Thanks for stopping by!

Yes, I'll be using a Blood Ravens color scheme, so the darker reds, bone whites and black.
I have in mind to cover the raptor in a red basecoat, with some white racing stripes on the wings and the side of the hull.
I would like to to a freehand black raven silhouette spread out across the upper hull. We'll see if my painting skills can match my vision

Small update, I made the flying base for the model using 1/4" acrylic rod that I curved after putting it in the oven.
The base will be removable, I also plan to make a landing pad base since the Raptor has removable landing gear.

Started on a base-coat, and some pre-shading for the Fire Raptor. The upper side gets a bit of highlighting, the bottom gets darkening, in preparation for a fair bit of weathering. 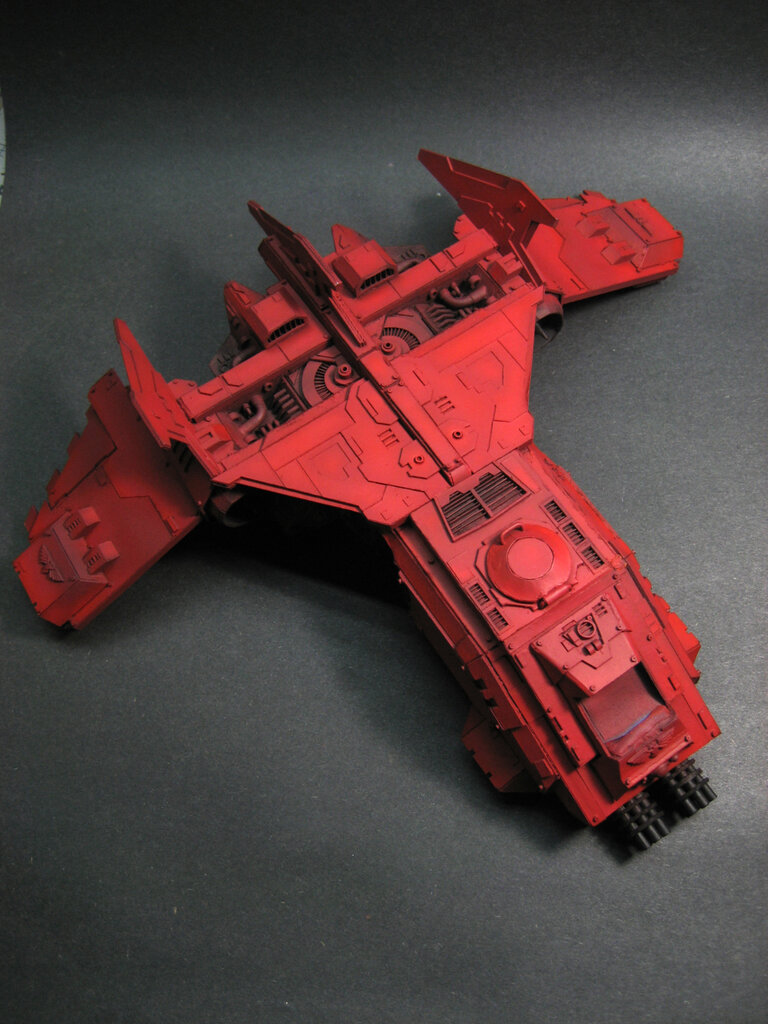 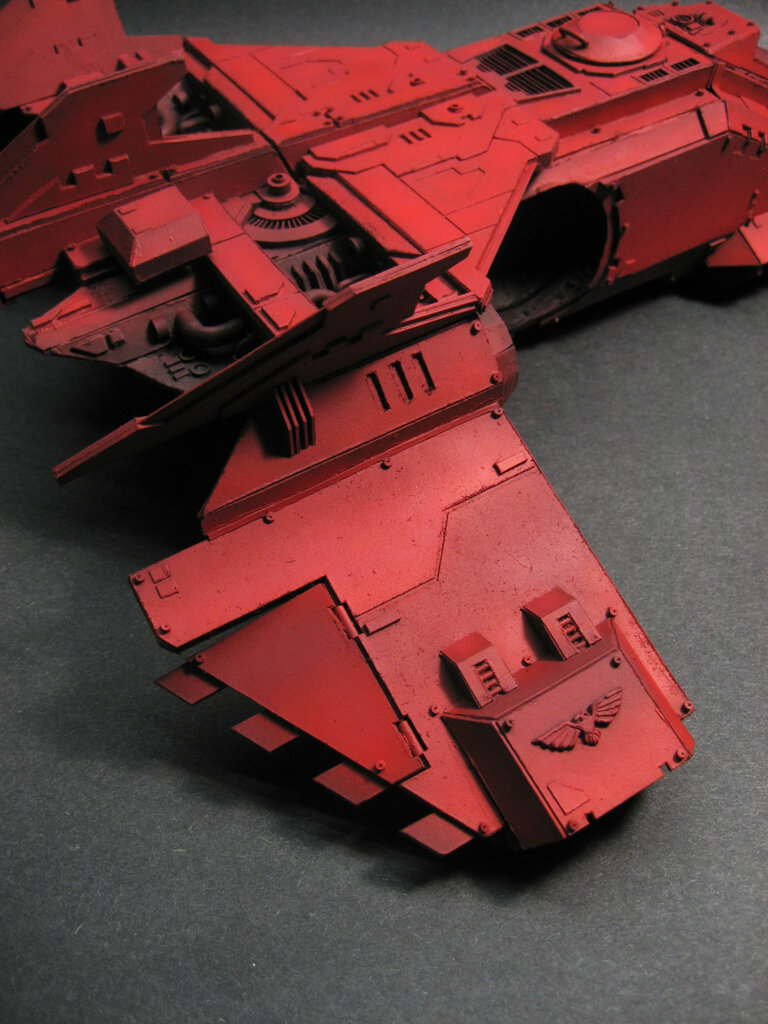 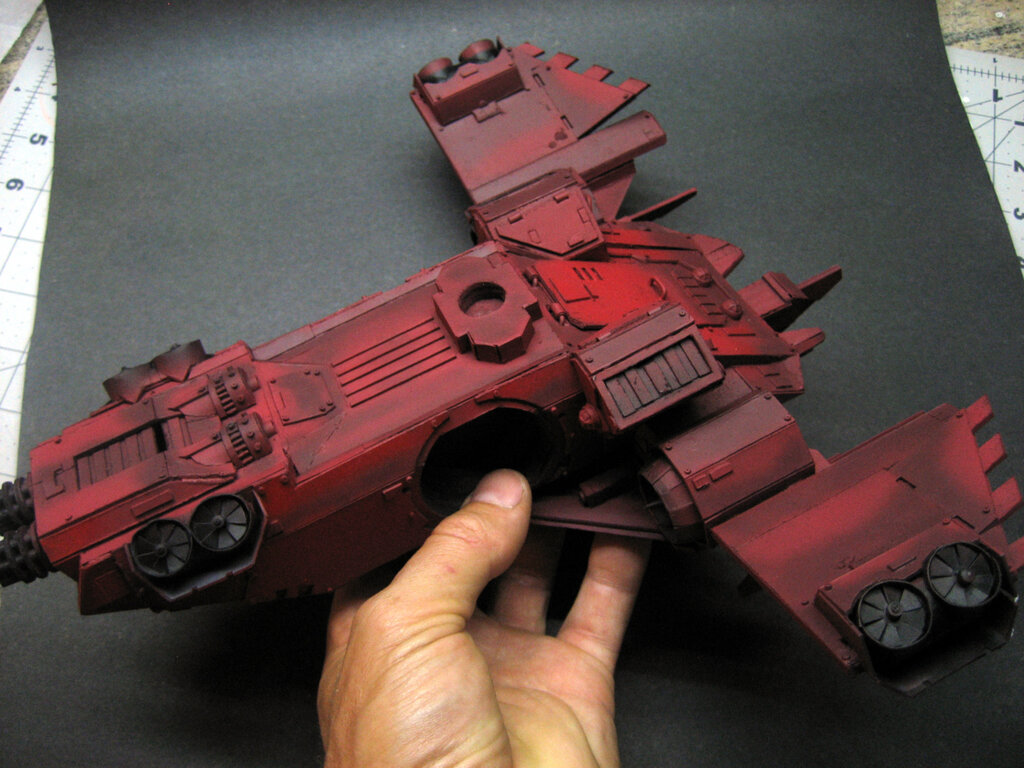 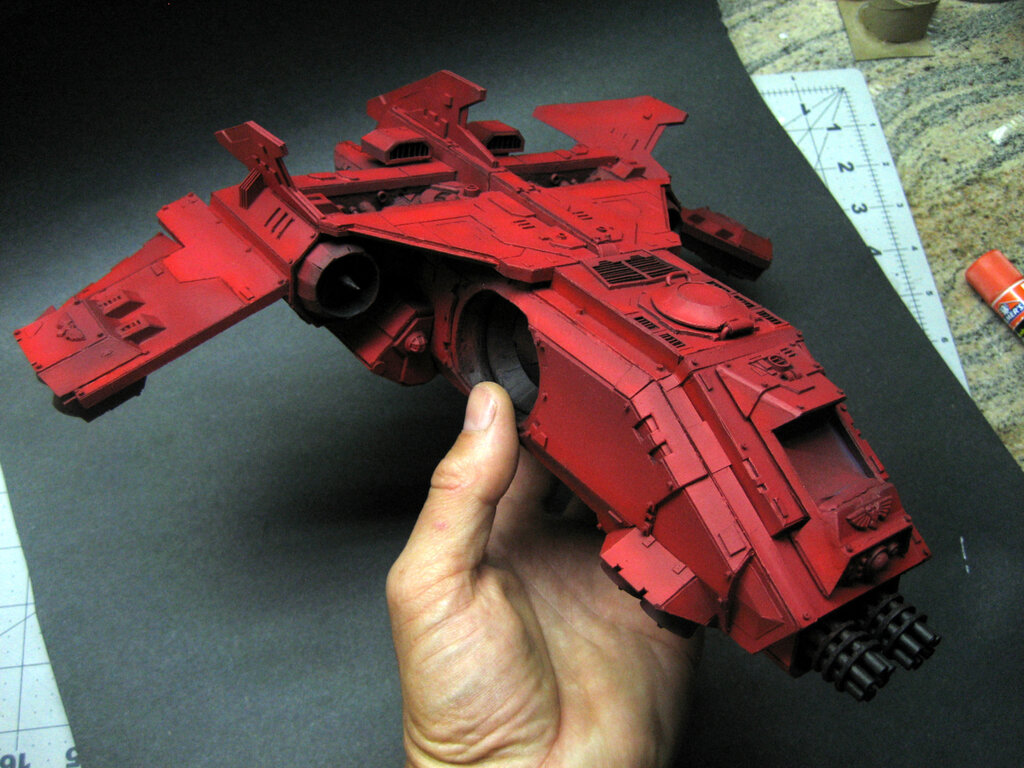 I had to check back to make sure I understood what the base material of this was.

You should be working at Forgeworld.

Paint makes it even more amazing!

Being painted now I would never be able guess it being mostly made of cardboard and paper!

I had to check back to make sure I understood what the base material of this was.

You should be working at Forgeworld.
Click to expand...

Paint makes it even more amazing!

Being painted now I would never be able guess it being mostly made of cardboard and paper!
Click to expand...


Yes, as usual the magic of paint hides all the different kinds of paper / bits of plastic that went into the build, and just blends it all together into a unit. I'm leaving the internal undercarriage wells unpainted so I can show people afterwards that yes, this is in fact made out of cereal boxes