RPF PREMIUM MEMBER
The scout Trooper has always been by favorite trooper design and I have been looking to build the iconic blaster for some time. After doing some hunting around, and disregarding the screen cast RS props version, the consensus is that Eric over at Polymer Armory makes one of the best out there. I asked Eric if he could cast me one out of off white resin as my plan was to try and replicate the Julian's Auction version which has some significant wear and tear. The kit itself is phenomenal and comes in four pieces (main body, scope, scope clamp half, hand guard in aluminum) that are assembled with screws. Unfortunately I didn't document the process well but below are some notes about the build.

Getting the body ready

- The casting was actually a little too sharp to match the reference i had, so i rounded over basically all the edges with some 180 and 220 grit sandpaper
-There was a fine texture on the cast that i smoothed out to match reference pics, this required a significant amount of sanding to get out. Not sure where this texture came from but without sanding it down the paint would definitely have had a strange appearance
-filled in the transition line on the singlepoint scope between the main body and clear tip. The single point cast was fantastic and i appreciate that eric cast it this way so as to give the builder the option of how to finish it. In my case, the auction blaster has a smooth transition from the body of the scope to the tip so i did some filling with white putty and sanded smooth
-The hand guard is made from aluminum and just needed to angle back the leading edge with the Dremel and some files
-The supplied screws are all Philips head so in order to match reference I bought flat head screws for the scope clamp and hand guard

-I painted the whole blaster satin black then misted it with flat black to dull it down just a bit. After dry I went back and burnished the whole thing to blend the two together. Last I then sprayed some satin on top in spots to have a little bit of contrast to the sheen
-I used some sandpaper and other sharp tools to remove the paint down to the resin to match reference pics
-For the aluminum handguard I matched the resin color with some tamiya paint to add the wear marks
-I used a number of different AK pigments in all of the recesses to give it a dusty old appearance. just tapped in with a paintbrush and wiped off the excess with my hands
-went outside and covered it with dirt
-painted on some random white blotches and the distinctive rust spot with some very thinned out acrylics

Pretty happy with the results but can also see some areas to improve. Ill post up more pics once i get the stand worked out. 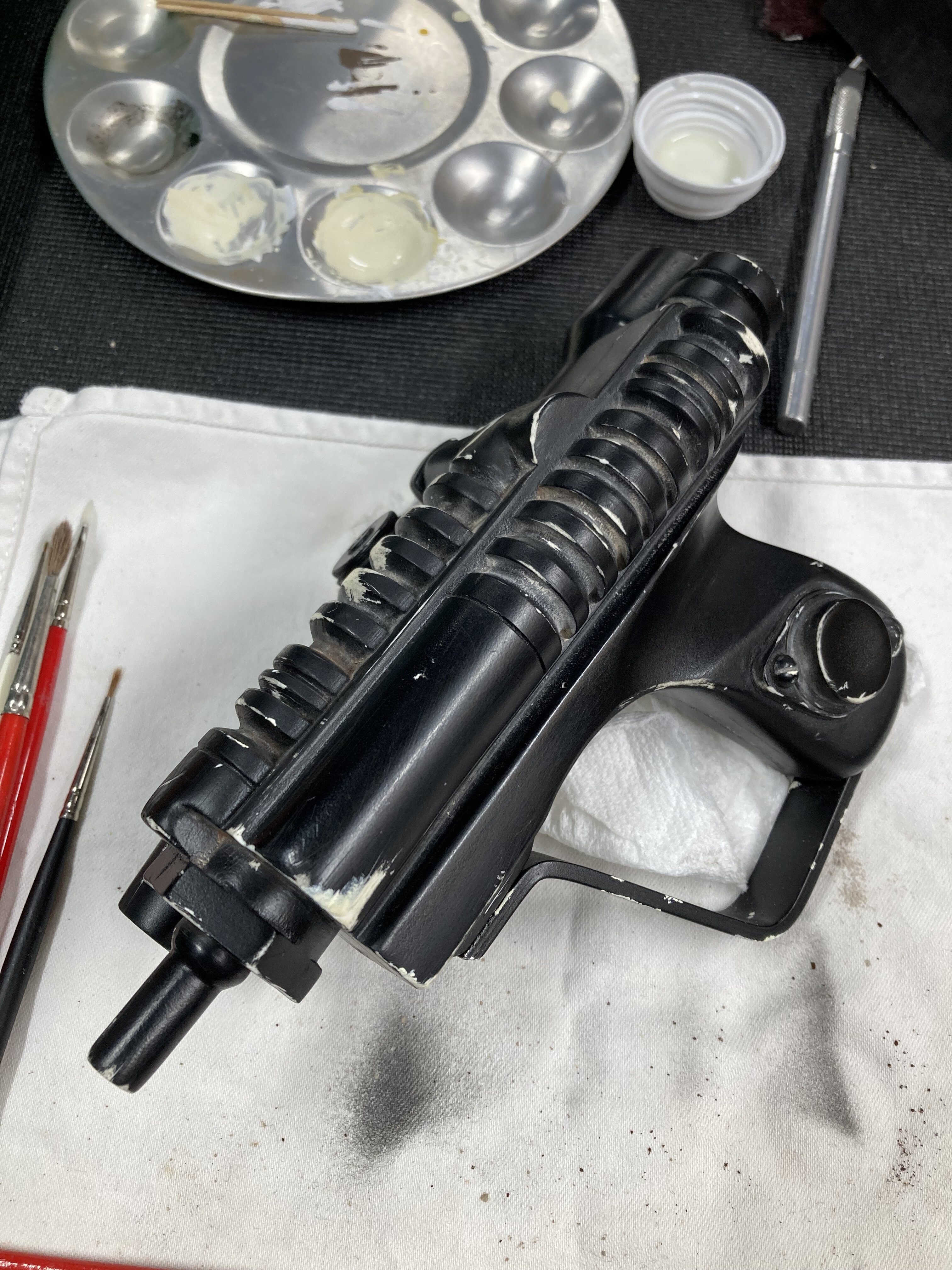 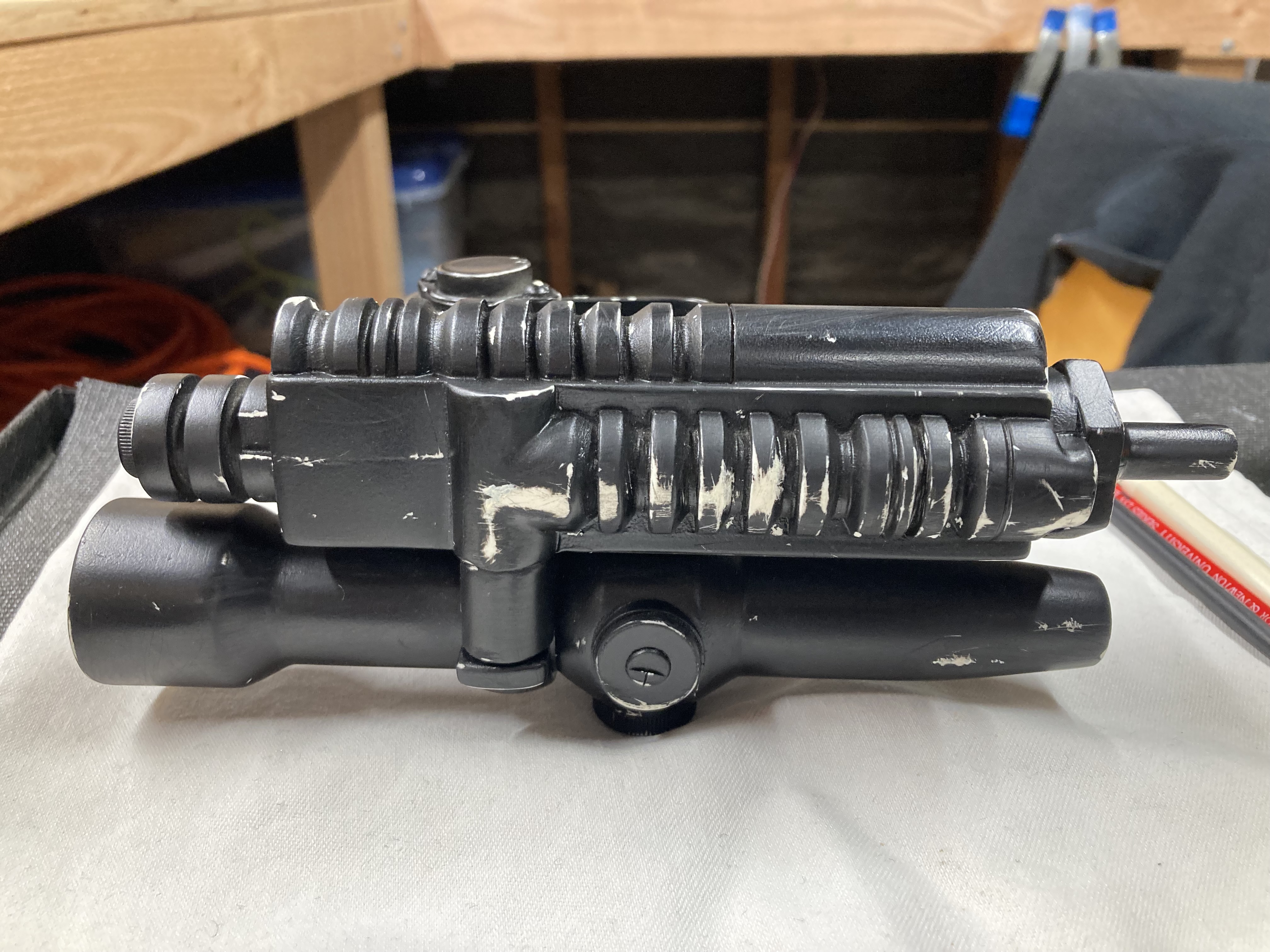 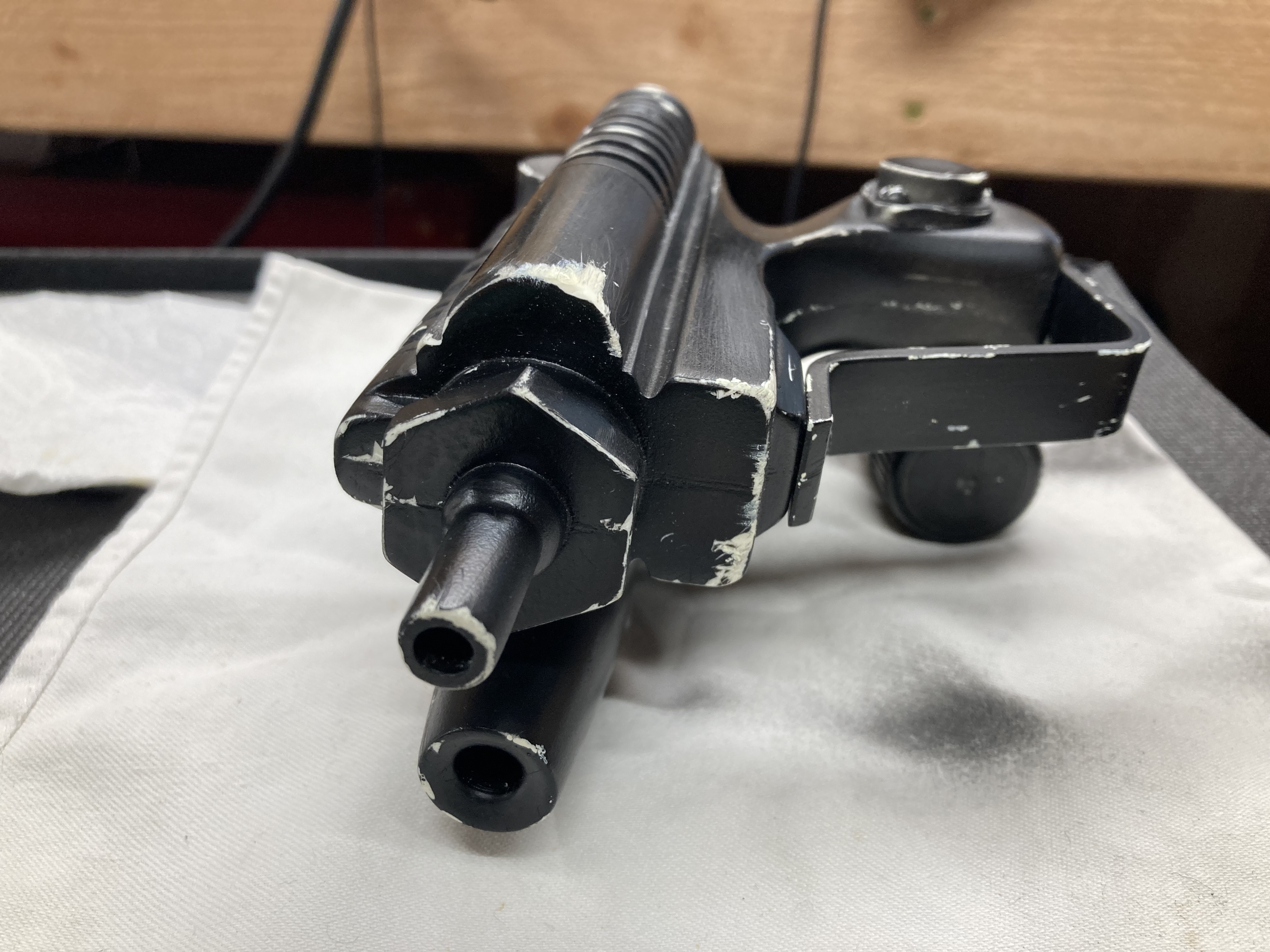 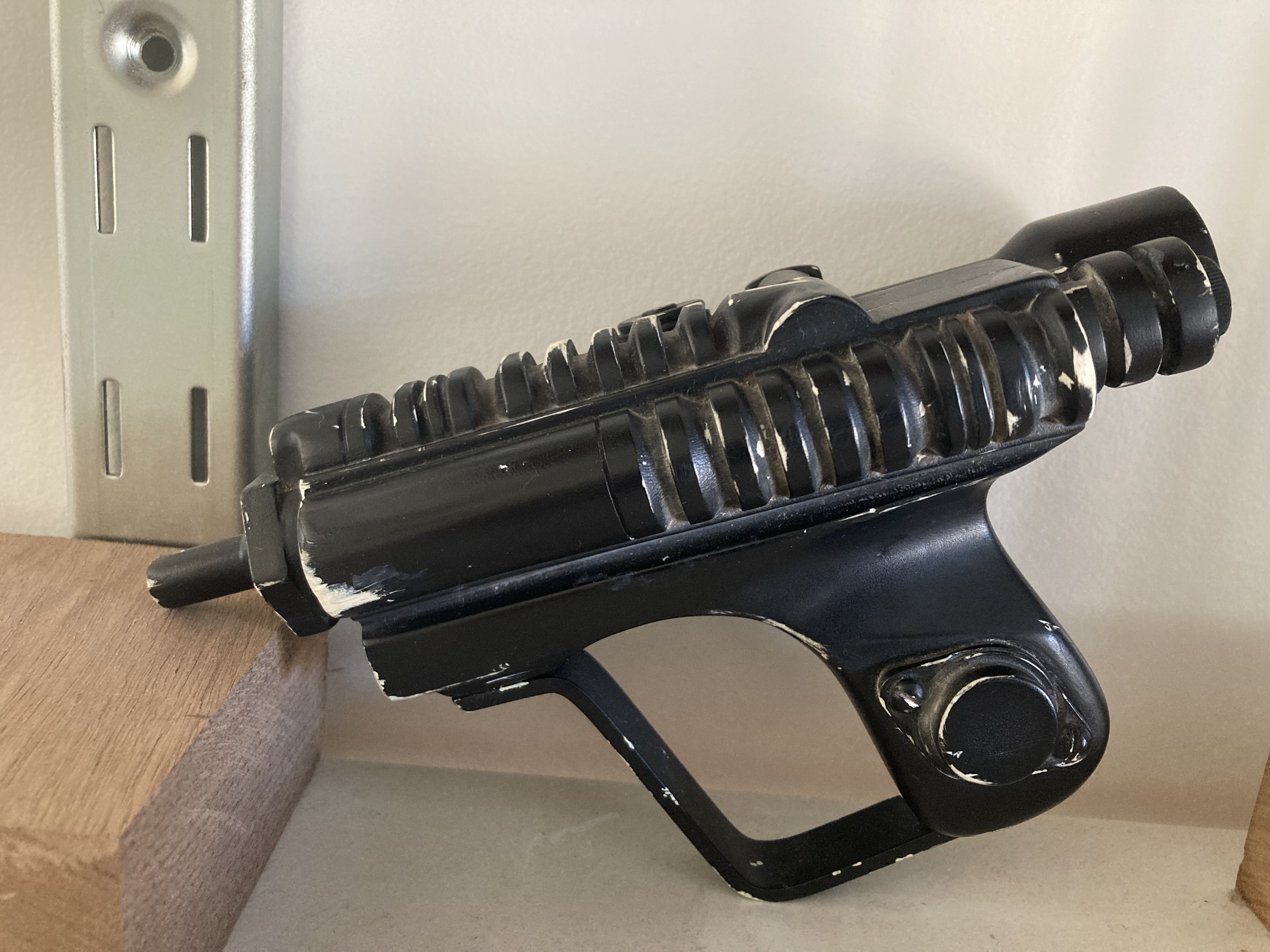 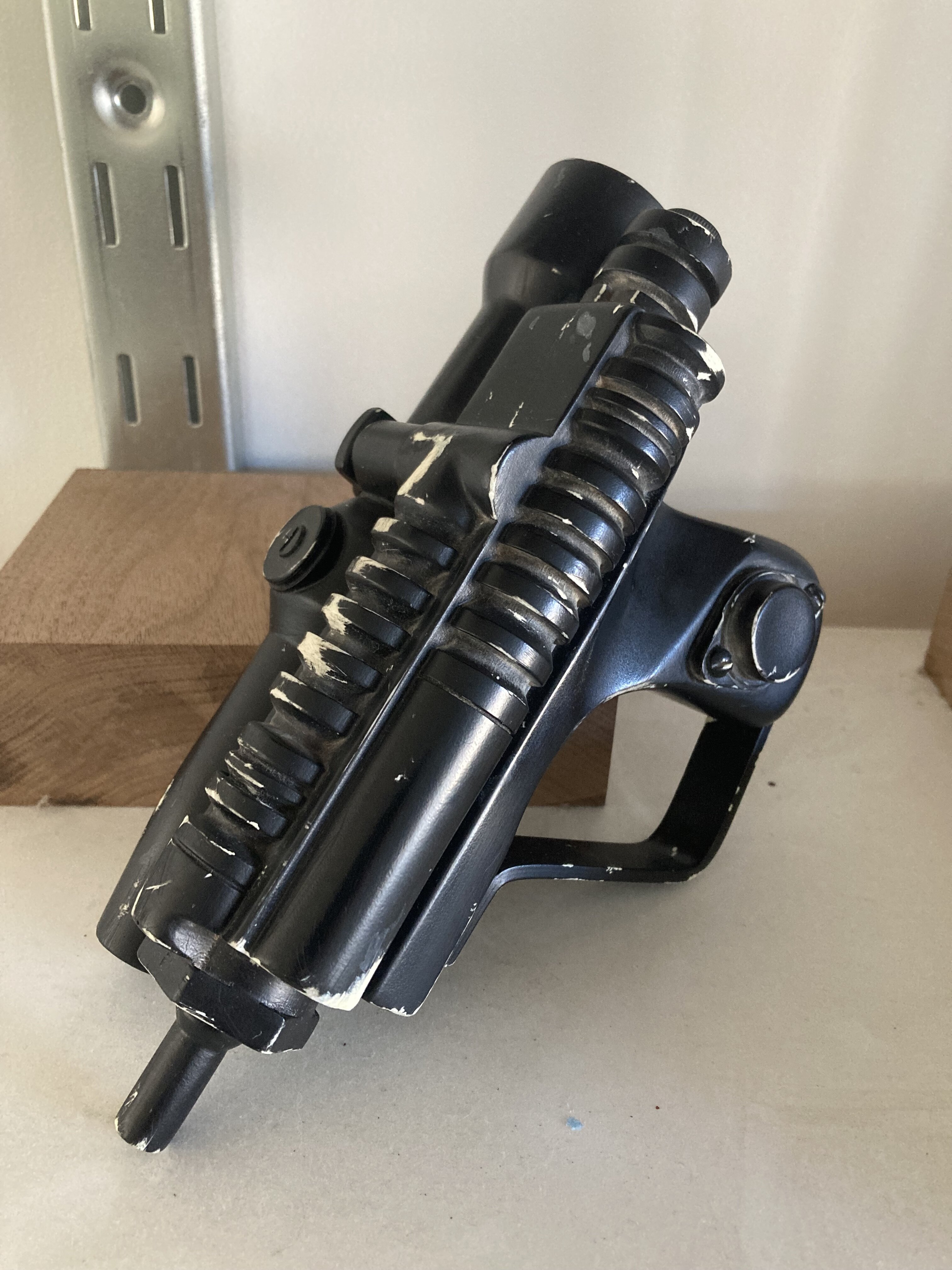 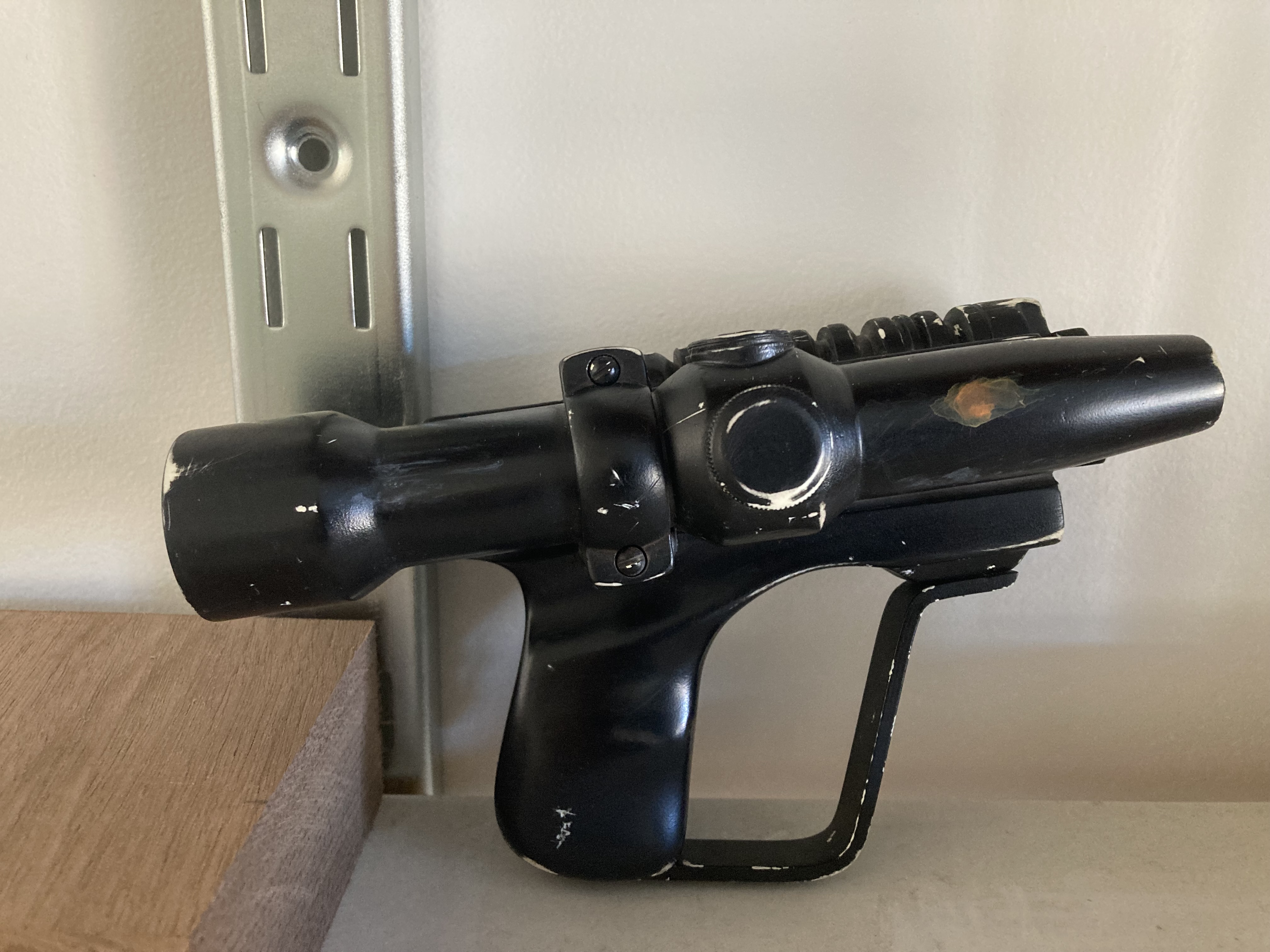