RPF PREMIUM MEMBER
Hi guys, I want to show my last work about Indiana Jones props. I know that many of yours at cow already know this work but I think this community is very big and always can be interested for other people, specially replica and prop collectors. This is from the thread I started at indygear and the progress of this work:


I would like to present my new project: Sankara stones from TOD.

In the last months I have been thinking about this project. I needed to have this centerpiece from TOD. After some time gathering photographic information and some technical data like measurements from auctions data sheet, etc. .. I decided to make both versions, translucent and normal hero version of the stones.

One of the things that you realize is that when you are looking at the screenshots we see several changes of the stones in different scenes. At the scene from skull Altar we see changes several times as a function of location, by hands or standing in the skull. 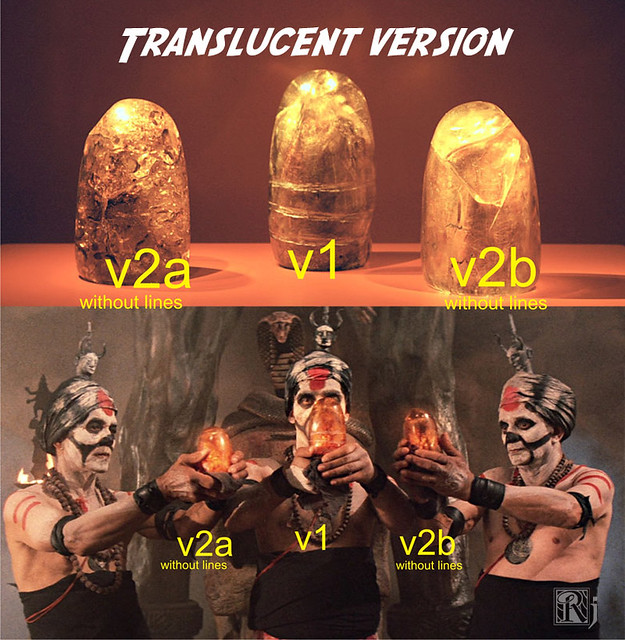 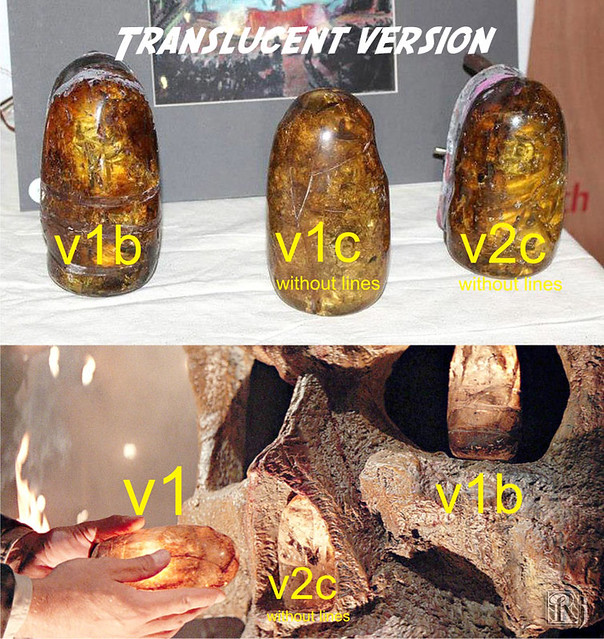 Also in the final scene on the bridge, the last stone, held by Mola Ram before falling into the Indy hands, which is finally returned to the village, is represented by three stones that are not the same although two of them if they are in form.

Basically, I have sorted the stones by shape into two types: v1 (the tall stone) and v2 (smaller) with variants (only based on my comparison with screenshots and stones seen in exhibitions). Other productions stones at auctions differ from this classification. Like the Grail, I wanted to make the look of a SA version.
From these two types differ in terms of variations of the three lines disposition (back or front face ) and if it has or not these, and of course, in normal (opaque) version with some others scratches, more visibles. 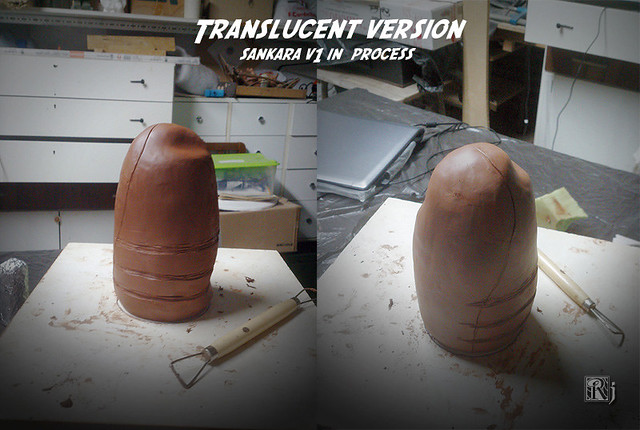 Hope you like the result when everything is finalized. The hard work is to select which set of stones can be done to form one set or another, depending on the scene we´re talking about. Thus, it is possible open discussions.

New update, as I promised. The first three models in clay ready to let it dry for a few days and then baked to harden. Then I will prepare them for the molds. Once the molds are done, the next step will be to make, at least, two more versions of sv1 to complete the different stones seen and match on screen and exhibition.
I am studying possible combinations for the set and another questions. 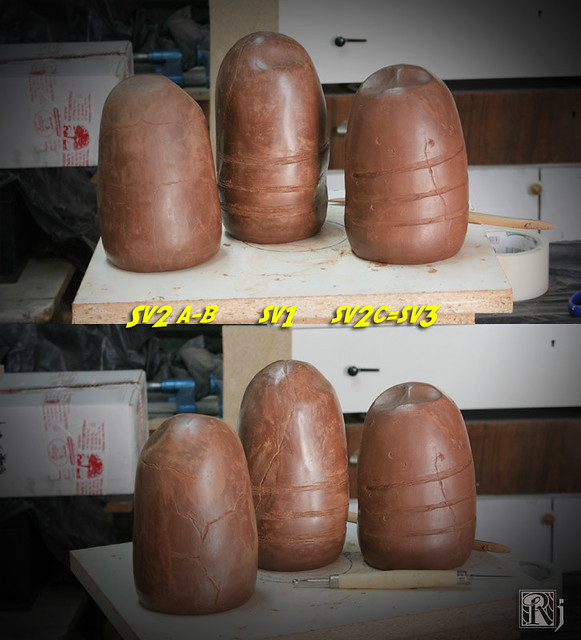 
I still working on it. Now, once the molds are done, I am testing the sv1 translucent version. I have another two stones in process for the normal version. With this test, I have still to add more crack effects to the stones to get the SA look but at the same time I am evaluating the patina and color effect as you see in the pic. I have more work to do with the final look. I hope to get the right look 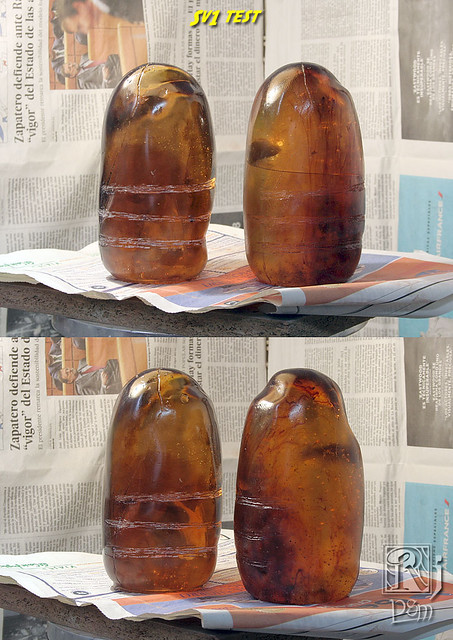 Now, it´s time to show the sankara v2, the middle from the archives and the small stone A y B from exhibition

This is my second test on it. I think I got. 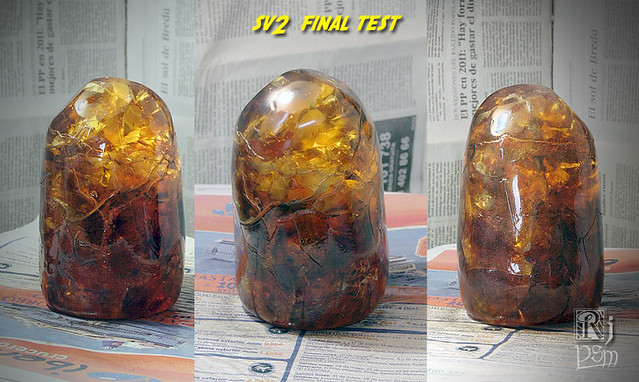 
And here again I want to show another preview on the result of the normal version of SV3, the other small stone. It´s difficult to get the point in the aspect, it´s not totally opaque after seeing several captures and compare wit some images from auctions or exhibitions. I think I got the correct aged look maybe with a little less cracks 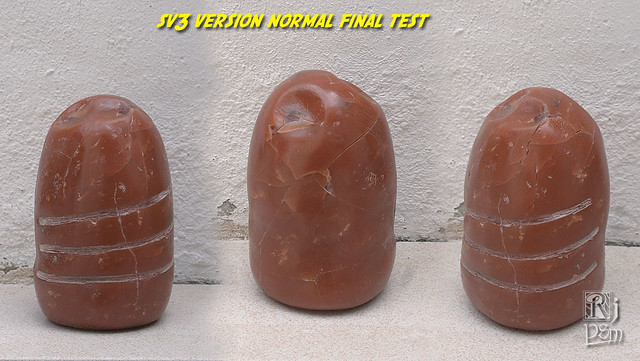 A pic of a the first set of sankara stones, I have not material to make more test. The second stone sv2 must be with less cracks. This is the set from "first encounter of the stones" in the temple of Doom or I could call this "exhibition set".

Finally, I have finished all the versions

Ladies and Gentleman, here you have the other two set

It has been difficult to get the SA aspect of the stones, comparing screencaps with archives pics from original sankara and and discarding not screen used or first proof. The texture and color is done in a natural way, no paint.

Sankara from the Altar of skull shape ...

I will made a run of the normal version first-

there is a surprise for the lighted version, soon, thanks to known member here
No more details for the moment.


I want to show how I take this work serious to make , once more, a version based on screencaps first, trying to get the more accurate possible in shape, texture and aged look, searching, no one version more, the version I saw on screen.

Looks like a simple prop but even in the apparently simpler we should seek the best result and not underestimate. I take more research in this project with respect my previous works. I know many details to get screen accurate look go unnoticed for many people but as Indyfan, I need those details in the replica to have the version that satisfies me.

Kudos to my father that served me patiently as model

RPF PREMIUM MEMBER
You know, this project is not only fantastic, but PERFECT!!!!

RPF PREMIUM MEMBER
As already written at COW... your Sankaras are simply AWESOME opcorn :thumbsup
Such as all the other things you did You are a true Artist....

RPF PREMIUM MEMBER
Thanks guys, For the moment the normal sankaras comes to its end but the lighted version will be more time in development until the circuit of light is done. kudos for Sarednab and his team for thinking in this part.

Detail of two translucent stones with light in the background

RPF PREMIUM MEMBER
This is something come out from the movie!!!

These stones look fantastic. Obviously alot of research and dedication has been invested to produce the final replicas.
Will be watching this thread with great interest.
Top work!
D

Hope the lighted ones are made for a run... been wanting a set like forever.

Amazing! Looks like you ran out of the Temple with them yourself!

Fantastic work and dedication to obtaining accuracy.
I'll be following this with great interest.

RPF PREMIUM MEMBER
Thanks again . Yes , it has a lot of research. I like to put all my effort in each prop I make, even if its looks more simple but I´m sure propmaker of the original prop had also to make many test to obtain definitive look.

RPF PREMIUM MEMBER
Every prop requested many many time for research... Tgis is a step that MUST be done in the best way possible to relase a perfect prop.
You can see this passion, time and work in everything relased by restaurajones.
His skill united with his passion give to us possibility to have a DEFINITIVE prop in everything relased by him!
Thanks for doing your work with great passion Pedro!

Wow, those are phenomenal!

wonderful, amazing work. I have been a fan of yours since i saw your idol, simply incredible work. congrats.

These are beautiful. Tremendous work by all involved!

Very interested to see how this goes, a lighted version would be great!

RPF PREMIUM MEMBER
I had more Sankara Stones than Mola Ram, and even without enslaving children

A pic of some of them