I'm currently looking for templates of Samurai and Ninja armour for use on a HT custom. So far all I've got is a pile of pix of samurai armour suits. Templates seem to be very scarce. All help appreciated, thanx.

Nice one! Thanx in every way possible, mate! This is going to be a great big serving of help to me!

Now all I need to find is Ninja Armour templates and modify the designs to suit a Predator.

Aquis Hydro said:
Nice one! Thanx in every way possible, mate! This is going to be a great big serving of help to me!

Now all I need to find is Ninja Armour templates and modify the designs to suit a Predator.
Click to expand...

The problem with that is that Ninja rarely wore armor that was noticeable. The type of armor they used was a few square plates held together by chain mail.

You could do what the "Ninja" in batman begins did and use a do' (chest and back piece) with modified shoulder and armored skirt. The pred I am working on right now is using my SCA samurai armor.

You're no drag at all mate. I've just been looking at these very same ninja armour pix and they aren't really much use for this project.

But one of my class-mates from Bridgend College told me that occasionaly they wore a kind of Pauldron strapped to their shoulder.

The closest I found to this was the Shrouded Armor worn by the Dark Brotherhood in TESIV: Oblivion... not very ninja if you ask me. 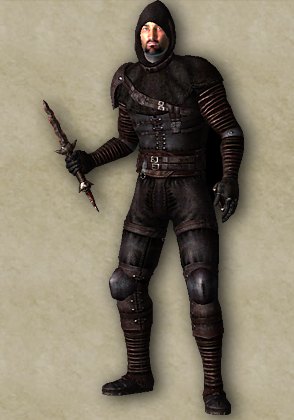 Hmmmm. Haven't seen anything like that in my research.... I will have to look into it farther. If you plan on doing a strapping system like the P1 had you could use a Sode (samurai shoulder guard).

The leather shoulder pauldron you are referring to is more than likely the armor used by the archers. Ninja wore very little armor, and what armor they did where were taken defeated samurai. Light chainmail was utilized underneath or only specific parts, usually from the foot soldiers, were used to protect enough, but not too much to hinder movement.

I have some samurai armor and ninja armor myself (replicas). I was actually going to try to go to my local convention in my samurai armor, but with the Predator features.

If you could provide some pictures of the kind of armour you're talking about, it would be handy, as so far the only images I've found or been shown of ninja armour are the chain/scale mail shirts.

As for Ryoushi's* armour, it is primarily samurai with some parts based off of ninja. This hopefully combines decent protection with mobility, as fitting for a young Predator warrior.

*Ryoushi is the name of my Predator character. If you want to know his backstory, then just ask and I'll post it up.

That's EXACTLY the armour my mate described! Apparently it was worn by Battle-Ninjas, specially trained to sneak around and assasinate an army's commander.

Several components of this armour are what i've tried to find images of. Thanks for the link, mate.

Does anyone have templates for Ahab Predator's mask...?

Does anyone know where to find Predator 1 style Armor Templates (printable)?