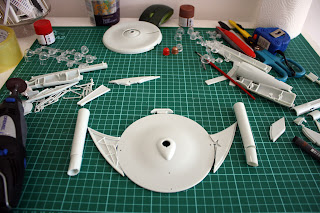 I built this for Jm419's Kitbash Kontest. I read somewhere that In the original draft of Search for Spock the Bird of prey was supposed to be of Romulan origin, and I liked the idea of bridging the TOS Romulan Bird of prey with the Klingon. I tried to keep it looking TOS era with a hint at the direction the design would go. Here are parts laid out in the basic body plan. 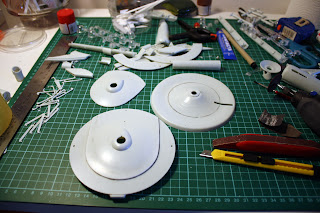 This kit is great because you get a ton of spare bits with it. I used that pile of different versions of the warp inter-cooler intakes to the left (thank you Haynes manual) to make the vanes of cooling rods on the back of the ship. I hemmed and hawed about changing the bridge shape, but eventually I just sanded the top flat and called it good.
​ 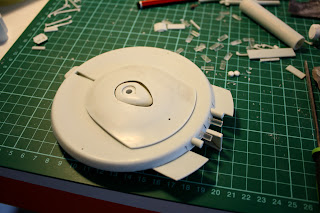 Version one of the ventral hull. It seemed boring just mirroring the top, but I didn't want the distinctive curve of the enterprise sensor dome on a Romulan ship. I end up completely redoing this later. 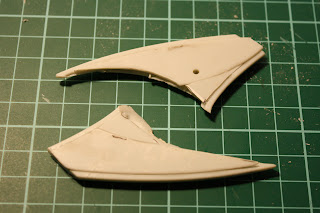 The nacelle pylons were by far the jankiest part of this build. I entertained the notion of just using the connection between the primary and secondary hull from the kit (is there a name for that?) but it was not to be. The nacelle pylons were made from the Starfleet logo bases filled in with bits of scrap. I figured out that if I sanded it before the glue was dry it made a much better seam. 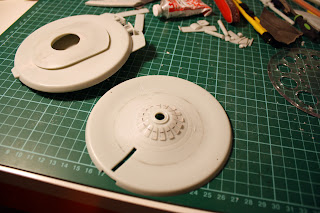 Here is the rebuild of the ventral hull. I used the nubbins from the Bussard covers as pointless detail to hide the fact that I was fast running out of parts. 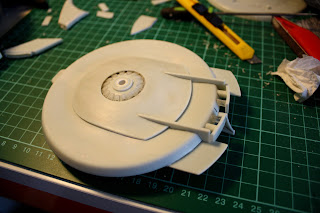 Here is the impulse engines coming together. I'd like to have been able to spend more time on this bit, but I went on a trip to Iceland in the middle of the month and it was pretty great so I can live with it. Initially I had a curve on the end of the dorsal fin, but it felt to cartoony, so I sanded it flat. 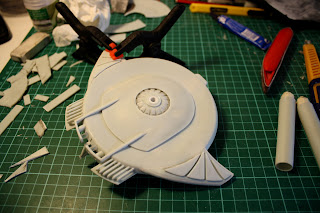 The pylons were ugly no matter how much I sanded them, so I hid the seams with the "feathers". I wanted to bring in some of the Trans-Am aesthetic of the original BOP, to still have it look tough, you know? I was pretty stoked about the way the vanes on the back came out. 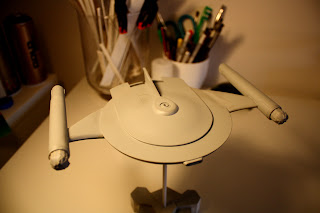 All primed up. Honestly, I wish it was still this color, but rules are there for a reason. We could only use 4 predetermined colors of paint, and scandalous primer was not among them. 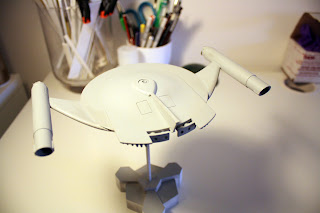 The shuttle-bay door were the easiest panel scribing I have ever done. I didn't screw up even one time. You can see the illicit non kit parts base that I built in the shape of the TOS Romulan Star Empire logo. Way cooler Swiss brutalist design than the buttrock screamin' eagle from TNG. 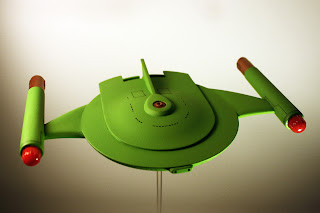 GREEN!!! It is honestly not this green in person. Really. Look up the color swatch for lawn green on the Montana Gold website. Anyway it is a lot less Christmassy than it could have been. 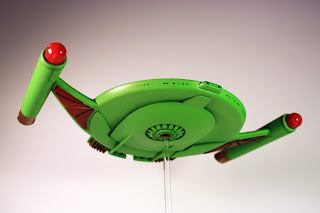 I had a hard time stopping myself from using more of the red on the ventral side, but I am glad I did. 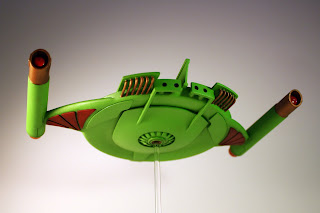 The copper really breaks up the holly-jolliness of the paint scheme. I love the styling of the TOS ships, so it was good times building this. Thanks for looking.

This is fascinating. Very well done. I might have to steal this design from you - the underside is so believable as a Trek ship that it looks almost straight out of TOS.

You clearly put a hell of a lot of work into your build and it really paid off. Yours fits in with the TOS theme great and you've definitely set the standard for the next build!

Yours was one of the two I voted for, and I needed no deliberation to make that choice. Excellent build, and I especially liked that you made it harder for yourself by not building a Federation ship.

Question: the dozen copper pipe-looking parts - were those sprues?


Those are the intercoolers from off the back top of the nacelles.

This turned out really well!
You made great use of the 3 kits!

2 kits. I'm very impressed by the nubbins from the nacelles - I even opened my kit to try and figure out what they were.

Great design, this looks like it could have been screen used. Congrats on winning.

Now that I see how you put together both the dorsal and ventral portions of your saucer, I'm even more impressed than ever. I kept wondering how the *BLEEP* you made that extra layer. Dang! Wish I'd though of something more like this...!