Late last year I finally finished off my Kylo Ren TFA build (my first costume replica) after just about 2 years of working on it. 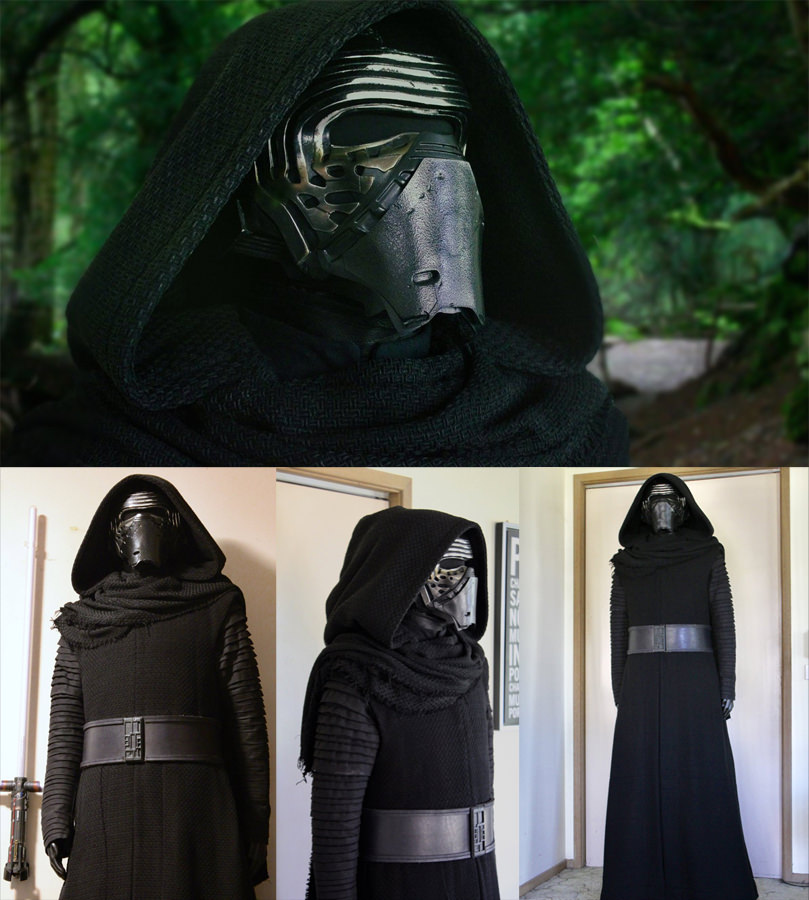 By that point I was adamant that my next build would be a simpler, one item build.

So naturally I picked K's coat from Blade Runner 2049. A coat with about 70-odd pieces all up...and I've decided to make 2 of them.

Timeframe:
I want to get these done a LOT quicker than my Kylo build, so I'm targetting having them done by mid-March at the latest, end of February at the earliest.

First Steps:
The first thing I had to do was draft the pattern. The first steps of this was actually done by laying masking tape over the coat on the NECA 7 inch version, peeling it off and laying it down on some paper. That gave me the rough shapes I was aiming for.

From there I sketched up a pattern for the torso of the coat, but I had to make a physical scale paper version if the sleeve to make sense of all the shapes.

Once I had a rough pattern in place, I took it all into Marvelous Designer, and blocked it all out on the mannequin in there that I'd previously sized to me for my Kylo build.

From there it was just a process of revision. I'd print out a scale version of the pattern and keep revising it till I was happy with it.

Here's the lineup of the first 6 iterations of the pattern:

I was then confident enough in the pattern that I printed off a full size version, and made a mockup in calico (excuse the janky bathroom photos). 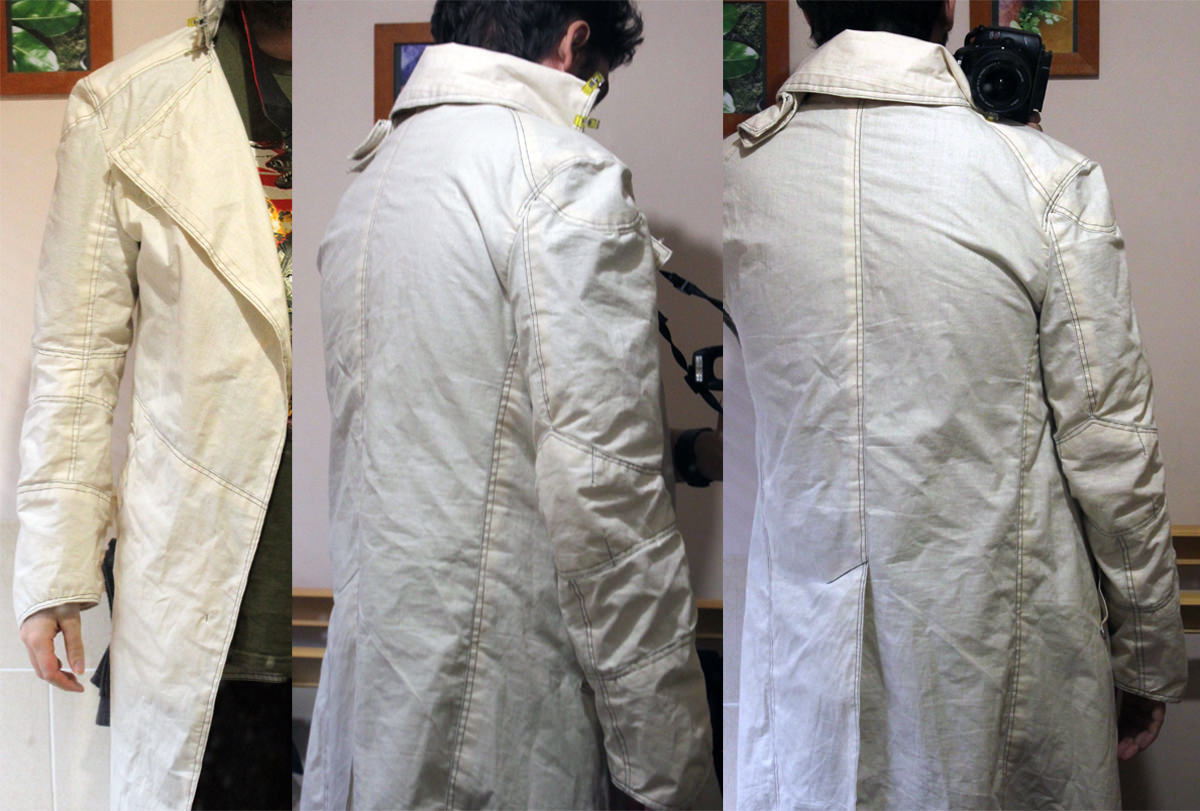 I wore it around the house for a good while see if I was happy with the fit, and if it needed a few changes (I was, but it did). Then, after making the adjustments to the pattern I decided to do a final paper mockup complete with working collar buckle and functional welt pockets (I have issues): 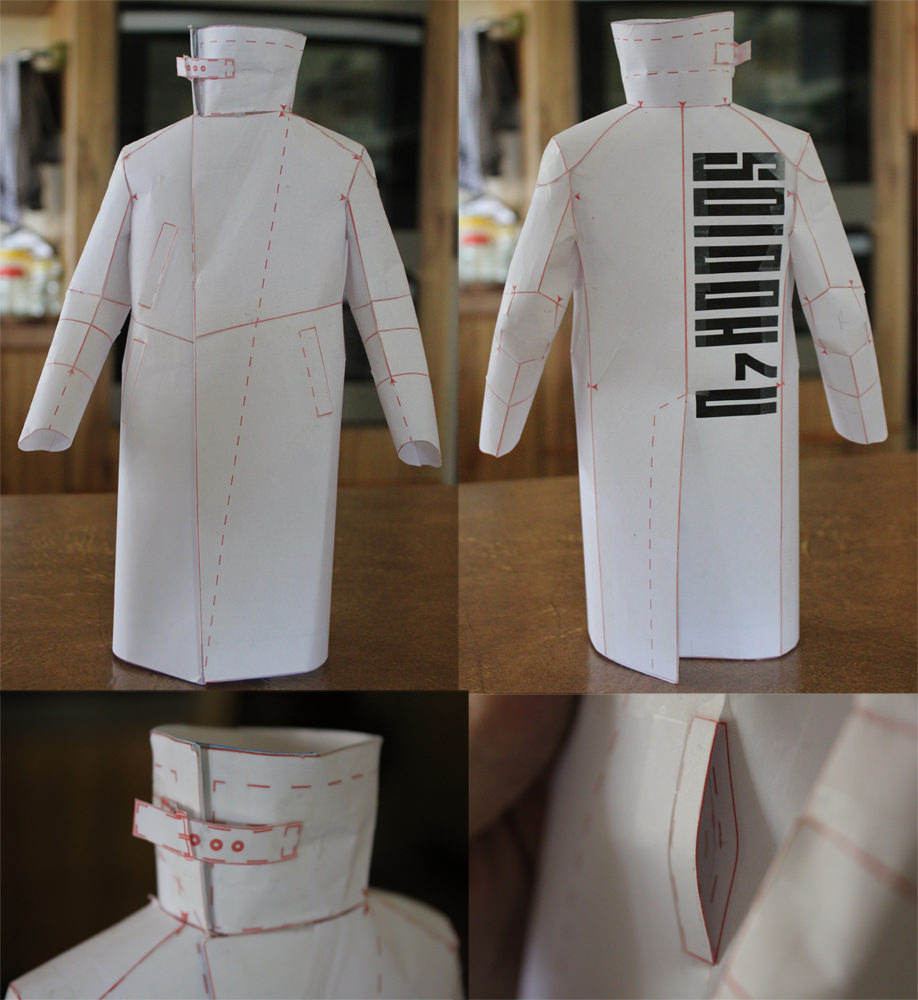 I then spent the next few days drawing up the proper, final patterns in illustrator and printed them off: 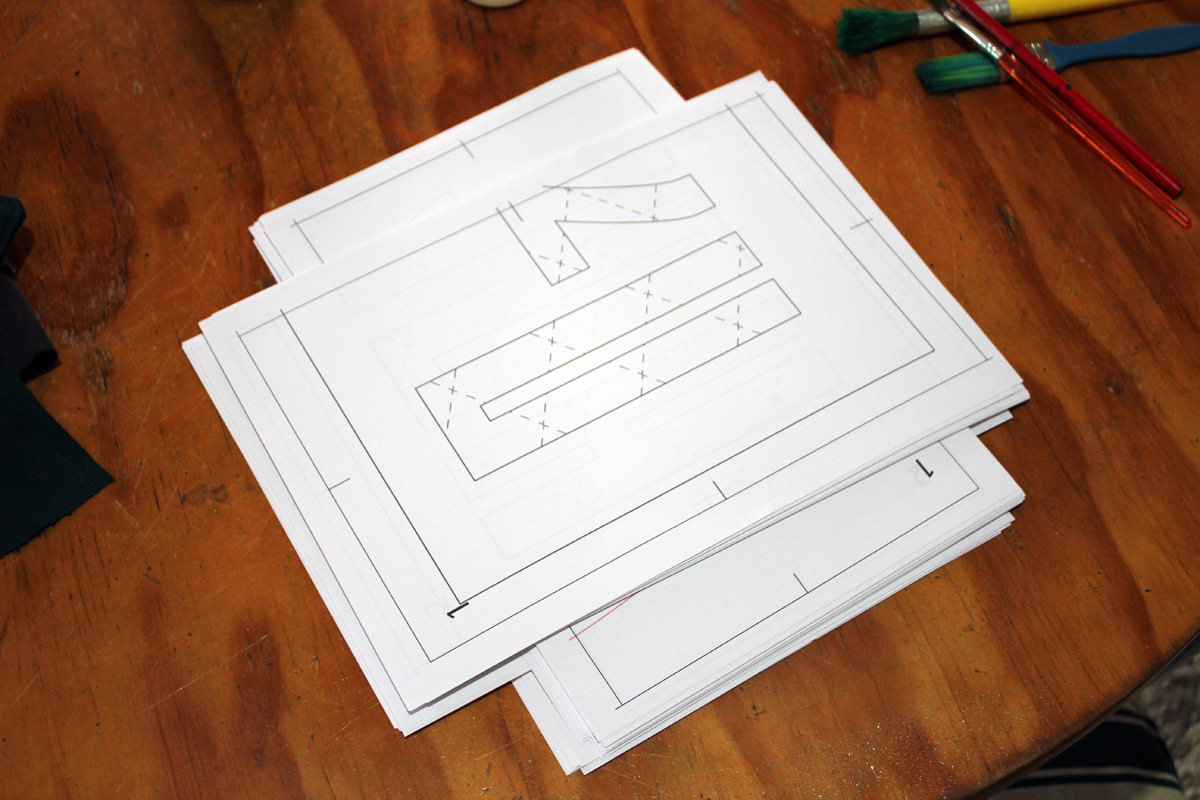 That, my friends, is 83 A4 pages of pain that I now have the joyous privelege of cutting out and sticking together with tape.

That's all for now. I hope to document as much of the build as I can over the next month or so. I'm just waiting on a few more bits of fabric before I can fully start. I should have a post next week going over all the fabric I'm using as well as the saga of getting it the right colour (there's some of that in the big K thread though).

EDIT: just a quick note, up there I kind of made it sound like I based my whole pattern off of the NECA figure. I didn't. It was an early part of it, but I've been studying this coat for countless hours since last October, I've taken a whole bunch of measurements off of it from the ARC display and various hi-res promo shots (counting stitches, counting the weave in the canvas, measuring angles...all sorts of insane stuff), so I'm very confident in the pattern I've done.
Last edited: Dec 14, 2020

I always enjoy seeing your work come to fruition, totally watching this thread for future updates

Really looking forward to seeing this all come together. Best of luck!

Looking like a GREAT Start!
Best of Luck with this project! thumbsup

Love the way you built a small mock-up of the coat and, so far as I can see, the sewing job and the overall form is already cool looking.:cool

Looking forward to seeing this, I'm hoping to start on my own in a couple months (once I get some other projects out of the way first).

Thanks for the kind words everyone, I'm excited to get working on it too.

As a small aside while I continue to wait for the last bits of fabric to arrive (should be here today), it was long part of my plan to paint the individual bits of canvas before I sewed the coat together, thinking it would be the easiest way. After doing a bunch of painting tests over the last 2 weeks and a few sewing tests, I've decided it might be best to paint it after the coat is all together.

It'll avoid it looking too 'patchwork' if I was to not paint each panel equally, plus I'm pretty sure the real coat was painted after the fact as well. I remember reading in an article that they didn't like the initial colour and that's why they painted it (similar to how the coat didn't initially have fur and it was added after). Plus in some shots from the Arc display, the topstitching is pretty clearly painted over at the same time as the rest of the fabric.

It also gives me a bunch more time to do painting tests and be 100% sure of how I'll do it, which is good.

The biggest plus of painting the coats after construction is that I get to actually start sewing them straight away once I have everything cut out (about 160-170 pieces between the 2 coats).

Question. Why are you making two of them? Is one of them for someone else, or is it just to have a backup?

Question. Why are you making two of them? Is one of them for someone else, or is it just to have a backup?
Click to expand...

one for me and one as a present for someone else who is basically the exact same size/measurements as me, so I can just use the same pattern for both.

This is looking phenomenal so far.

Any chance of future commissions?.... :rolleyes

Wow this is looking incredible. Any chance you’d be willing to sell your pattern? I need to make this coat in less than 3 weeks and have never patterned any type of garment before.

Looking great! You don't have any shots that clearly show the side of your build so far, have you seen this pic showing the side seam which stops mid panel? 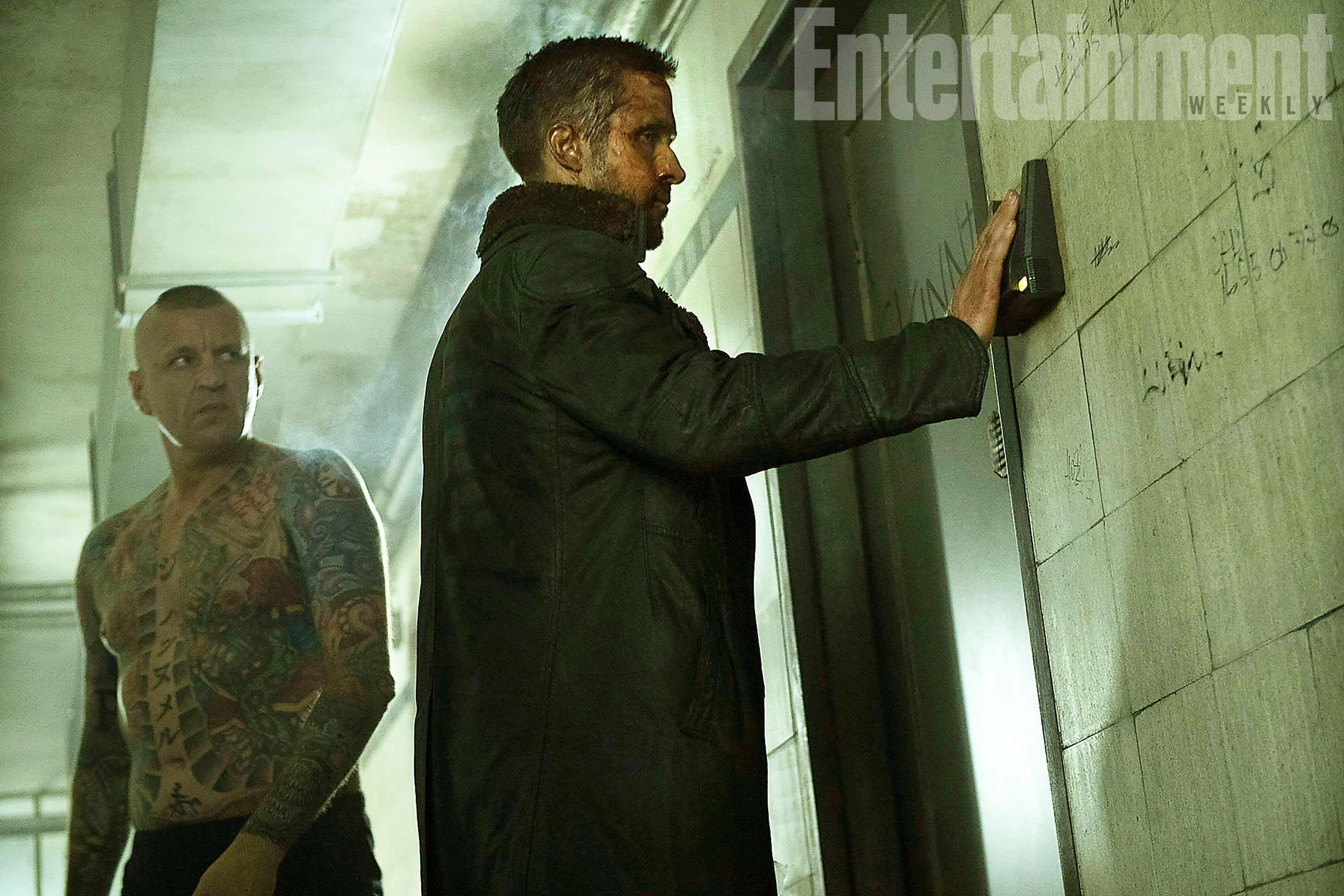 
tomservojones said:
This is looking phenomenal so far.

Any chance of future commissions?.... :rolleyes
Click to expand...

coregeek said:
Wow this is looking incredible. Any chance you’d be willing to sell your pattern? I need to make this coat in less than 3 weeks and have never patterned any type of garment before.
Click to expand...

Commissions and patterns are a thing I would love to offer, but there's a lot of factors that I still need to sort out and judge the feasibility of before I commit to anything.

Zlurpo said:
Looking great! You don't have any shots that clearly show the side of your build so far, have you seen this pic showing the side seam which stops mid panel?
Click to expand...

yep, it's there. You can see it in a few of the paper mockups.

Quick little update: I’ve just about finished cutting out all the canvas pieces for both jackets, and should have the rest of them cut out this morning. Then I’ve just got the rest of the bits to cut out, which will hopefully happen today as well, if not then over the weekend. The upshot of it all is, construction should start on Monday.

All canvas pieces are cut for the 2 coats and I'm now working my way through everything else.

Had some changes/additions to the pattern (mostly internal support stuff) that added some extra pieces, but it's still looking like sewing will start on Monday.

Okay, so the last 4 days have been quite the blur. Everything’s cut out now, for both coats, and the total number of pieces blew out a little because I had to modify some patterns and I added a few internal structure pieces, and...yeah, I was heading towards around 75 pieces for one coat (150 for both) but the final count is as follows:

Reason I’m feeling so tired - tracing out and cutting out 186 pattern pieces in about 36 hours over 4 days...

so the crux of it all is, I don’t think I’ll be doing commissions for this coat. Physically, I think it’d take too much out of me to do a run, I’m just one guy and it’s looking like 2 will be kicking my ass as it is.

So to make up for that...I will be selling the pattern at some point (once I’m all done and know everything works and tidy everything up) and the plan is to turn this thread into basically a step by step walkthrough of the build with pics and sketches and stuff to help anyone build their own, with all relevant posts indexed in the first post.

Now though, I’m going to get some sleep, for the real work begins tomorrow.

So to make up for that...I will be selling the pattern at some point (once I’m all done and know everything works and tidy everything up) and the plan is to turn this thread into basically a step by step walkthrough of the build with pics and sketches and stuff to help anyone build their own, with all relevant posts indexed in the first post.
Click to expand...

Today at 7:46 AM
binkleywalker
B

Today at 3:32 AM
Mechanismo