RPF PREMIUM MEMBER
If you were a comic book fan back in the 70s 80s and 90s, then you knew who George Perez was.

Today he made announcement that comes with much sadness:

“To all my fans, friends and extended family,

It’s rather hard to believe that it’s been almost three years since I formally announced my retirement from producing comics due to my failing vision and other infirmities brought on primarily by my diabetes. At the time I was flattered and humbled by the number of tributes and testimonials given me by my fans and peers. The kind words spoken on those occasions were so heartwarming that I used to quip that “the only thing missing from those events was me lying in a box.”

It was amusing at the time, I thought.

Now, not so much. On November 29th I received confirmation that, after undergoing surgery for a blockage in my liver, I have Stage 3 Pancreatic Cancer. It is surgically inoperable and my estimated life expectancy is between 6 months to a year. I have been given the option of chemotherapy and/or radiation therapy, but after weighing all the variables and assessing just how much of my remaining days would be eaten up by doctor visits, treatments, hospital stays and dealing with the often stressful and frustrating bureaucracy of the medical system, I’ve opted to just let nature take its course and I will enjoy whatever time I have left as fully as possible with my beautiful wife of over 40 years, my family, friends and my fans.

Since I received my diagnosis and prognosis, those in my inner circle have given me so much love, support and help, both practical and emotional. They’ve given me peace.

There will be some business matters to take care of before I go. I am already arranging with my art agent to refund the money paid for sketches that I can no longer finish. And, since, despite only having one working eye, I can still sign my name, I hope to coordinate one last mass book signing to help make my passing a bit easier. I also hope that I will be able to make one last public appearance wherein I can be photographed with as many of my fans as possible, with the proviso that I get to hug each and every one of them. I just want to be able to say goodbye with smiles as well as tears.

I know that many of you will have questions to ask or comments to make, and rather than fueling the fires of speculation and well-meaning but potentially harmful miscommunication, I will be returning to the arena of social media by starting a new Facebook account where fans and friends can communicate with me or my designated rep directly for updates and clarification.

For media and press inquiries, please use the contact information on the page as well. Please respect the privacy of my wife and family at this time and use the Facebook page rather than reaching out through other channels.

I may not be able to respond as quickly as I would like since I will be endeavoring to get as much outside pleasure as I can in the time allotted me, but I will do my best. Kind words would also be greatly appreciated. More details to follow once it’s up and running.

Well, that’s it for now. This is not a message I enjoyed writing, especially during the Holiday Season, but, oddly enough, I’m feeling the Christmas spirit more now than I have in many years. Maybe it’s because it will likely be my last. Or maybe because I am enveloped in the loving arms of so many who love me as much as I love them. It’s quite uplifting to be told that you’ve led a good life, that you’ve brought joy to so many lives and that you’ll be leaving this world a better place because you were part of it. To paraphrase Lou Gehrig: “Some people may think I got a bad break, but today, I feel like the luckiest man on the face of the Earth.”

RPF PREMIUM MEMBER
I hope one day we can say that Cancer is a thing of the past.

My sincere prayers and well wishes to his family and friends.

RPF PREMIUM MEMBER
As heartwrenching as this is, it's also somewhat of a blessing. With something like pancreatic cancer, you don't want it to be drawn out. His legacy will remain with us forever. His covers were some of my favs back when I was reading comics. Infinity Gauntlet, Batman, Titans. Some of the best of all time.

This is heartbreaking. His run on Teen Titans and Crisis on Infinite Earths Was some of the best artwork in comics.

Very sad to hear the news. Great Artist; he will be missed

RPF PREMIUM MEMBER
I'm guessing accidental click? Or small screen and clicked the one with tears?

Moviefreak said:
Can someone explain to me why anyone would find humor in a situation like this?
Did he say something you, Riceball, found humorous or was it just his announcement of the remaining few months of his life that made you chuckle?

It was an accident. I clicked on the wrong emoji. I've gone and fixed it.

Riceball said:
It was an accident. I clicked on the wrong emoji. I've gone and fixed it.
Click to expand...

My goodness. I could always tell George Perez's work in the 80's from how he inked. This is very sad news.

RPF PREMIUM MEMBER
This is a campaign to help support George. 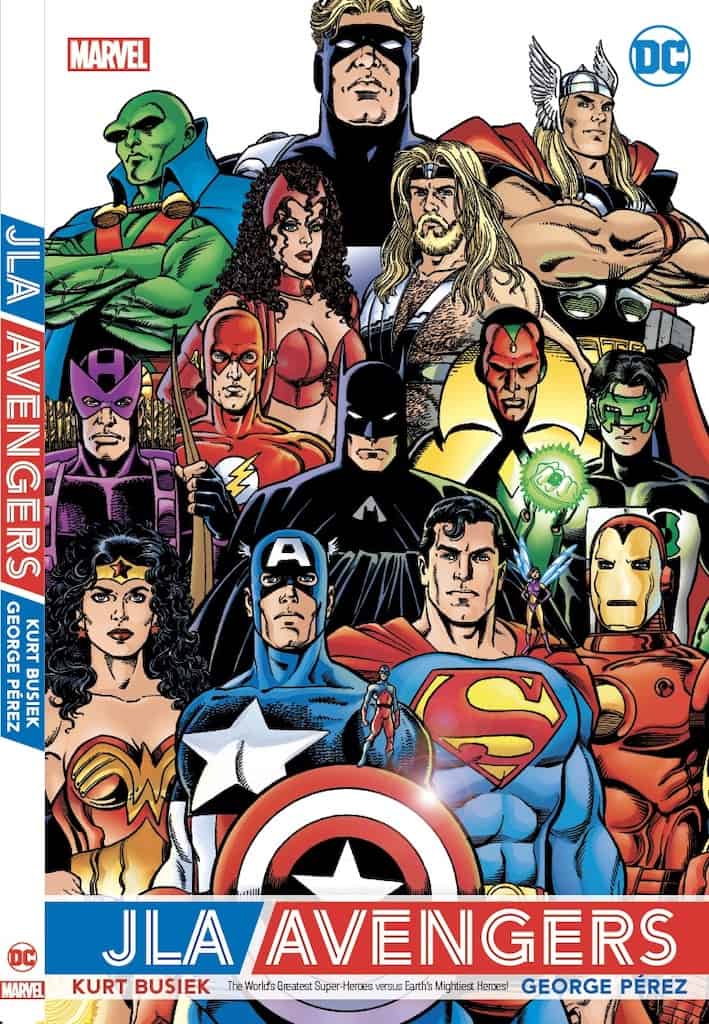 RPF PREMIUM MEMBER
Sadly, George has been having some medical complications and has been permanently moved into Hospice care. His wife said it isn’t saying his passing is coming soon, and this is to make things easier medically, but it is a reminder that his time is short.

Thanks for the news, albeit sad Moviefreak. 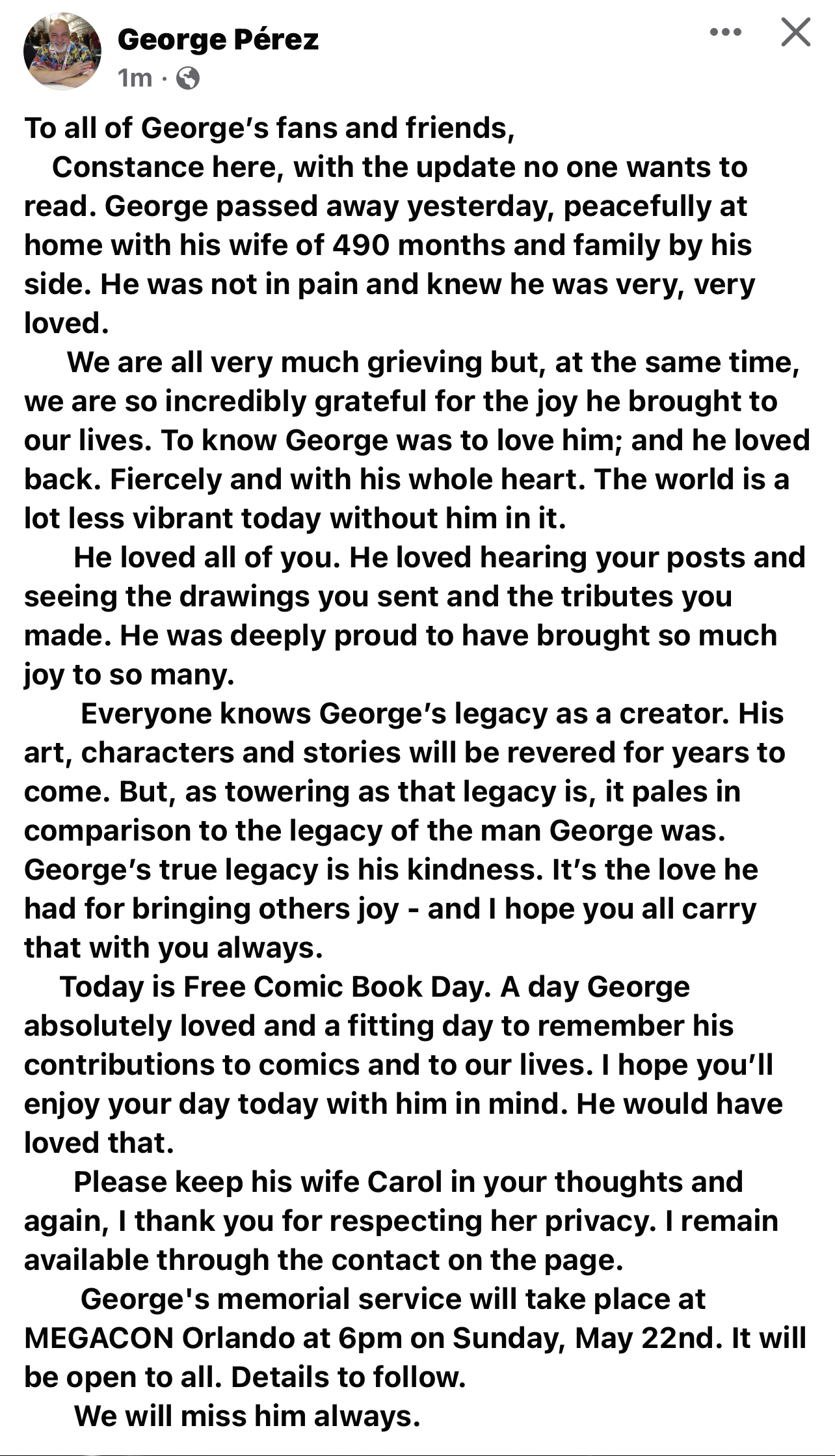 RPF PREMIUM MEMBER
Wow. How poetic that he passed so close to free comic book day. Two comic artist legends gone within a couple of weeks.

May he rest in peace.

Ron said:
Wow. How poetic that he passed so close to free comic book day.

I know. He Loved free comic book day. He lives an hour from me and made a point to do FCBD every year, at a local comic shop. He would do a sketch for you (if you donated a toy to charity), sign everyone’s books for free, and take as many photos as fans wanted… then, off to enjoy a nice lunch across the street at a German Restaurant. He was such a kind soul. So damn talented. He will be missed.

Great artist! I really enjoyed his work as a young kid. My oldest sister bought the comics and I devoured them! My eyes always gravitated to Perez's covers...some of the best in the business! His interiors had great action panels with dynamic poses. His understanding of facial expressions and hero physiques were second to none.

RIP George Perez. You will be missed but your work will live forever.