Anybody know what scope is on that rexim-favor pistol you see the stormtrooper holding? I think it'd be cool to upgrade as my resin one is a bit on the short side. 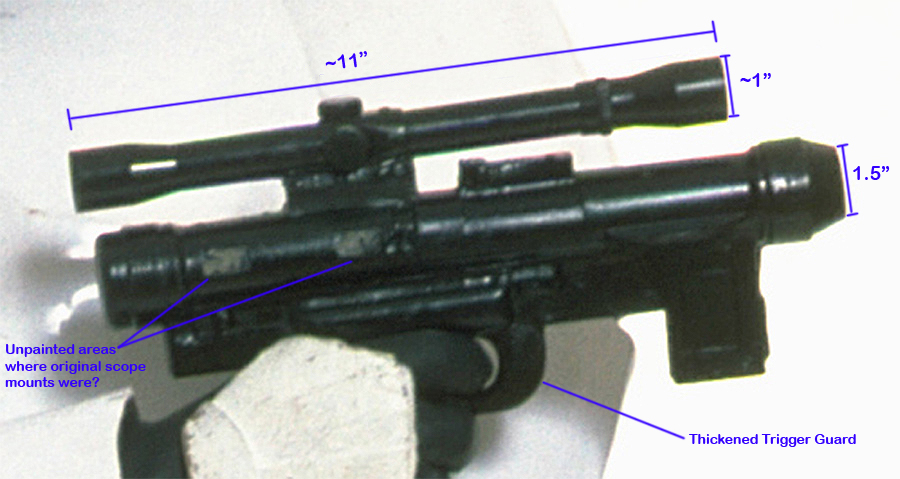 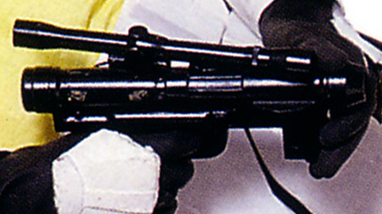 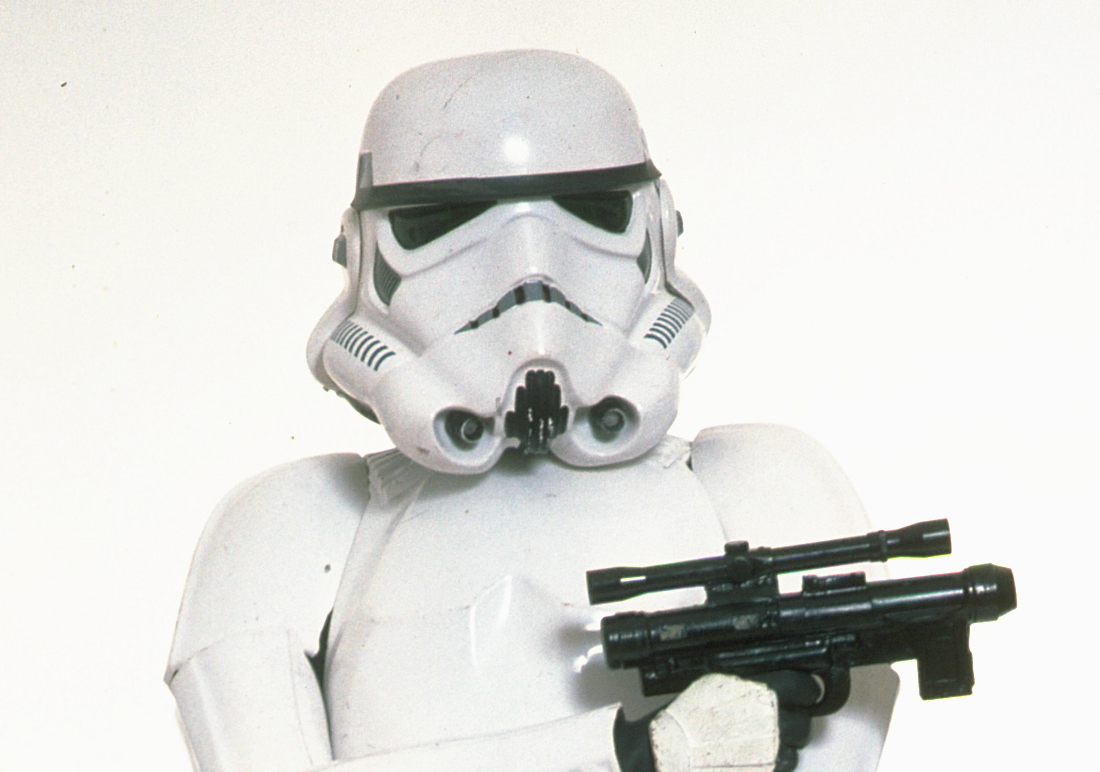 Isn't that the Singlepoint?

I believe it's the same as the one on Boba Fett's rifle, and the 2 on Chewie's crossbow.
I'm tired. . . can't think of the scope model # right now.

superjedi, you'd be my hero if you could tell me what it is.

RPF PREMIUM MEMBER
Isn't it an "ASI" something? I could swear that rings a bell.

Evazan and Chewie scopes are Model 7's but no one knows what manufacturer that is.

They are 4x20 scopes and most new ones look almost the same. You could go with a Tasco or Simmons 4x20. They run about $10 on Ebay or in stores.
If you need the rings too then that's trickier since they are pretty rare.

RPF PREMIUM MEMBER
The trooper Rexum scope is different to both the Bowcaster, Evazan and Boba Fett scopes. And the scope ring/mount is also different.

Originally posted by lonepigeon@Apr 4 2006, 06:03 PM
Evazan and Chewie scopes are Model 7's but no one knows what manufacturer that is.

They are 4x20 scopes and most new ones look almost the same. You could go with a Tasco or Simmons 4x20. They run about $10 on Ebay or in stores.
If you need the rings too then that's trickier since they are pretty rare.

Is the scope backwards on the trooper gun as well?

I just spotted something in Toys R Us of all places. On the back of the large Han Trooper figure 'box', there is a shot of the promo trooper I've never seen. I'm assuming the Han head was photoshopped on, but look at the glorious shot of the pistol! There is definitely a piece sticking out of the left side of the magazine well. This is also a better view of the mystery scope. Somebody please find that scope! Lol! 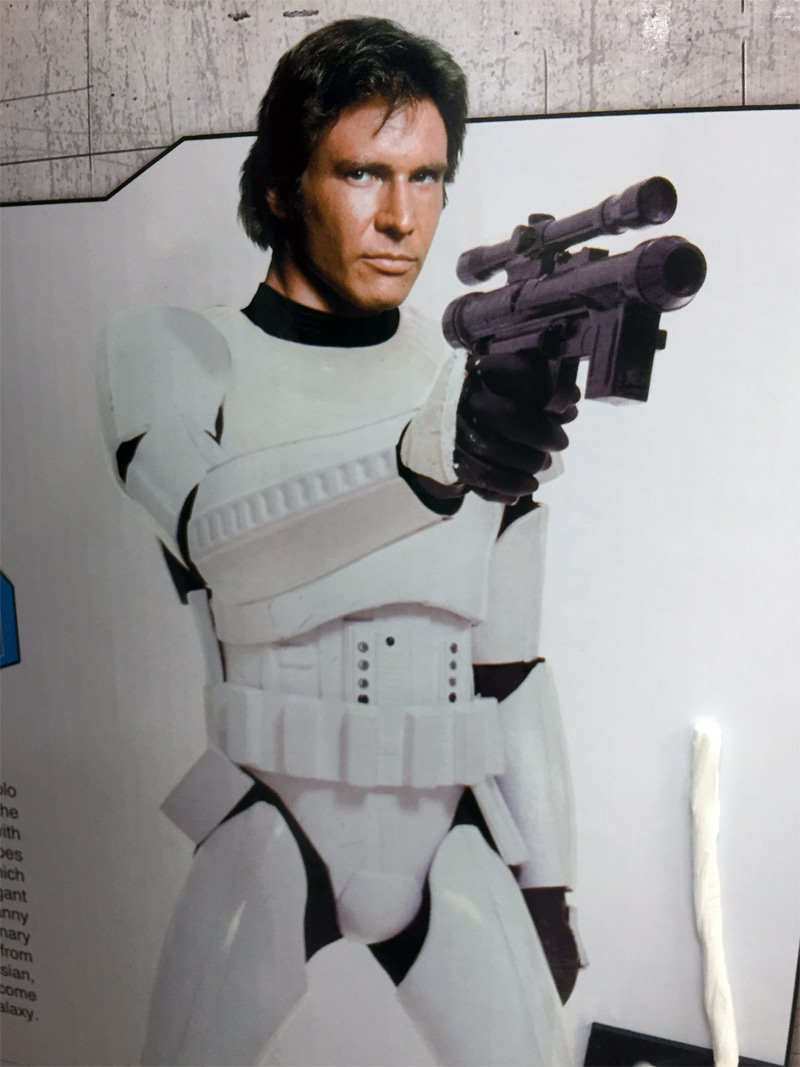 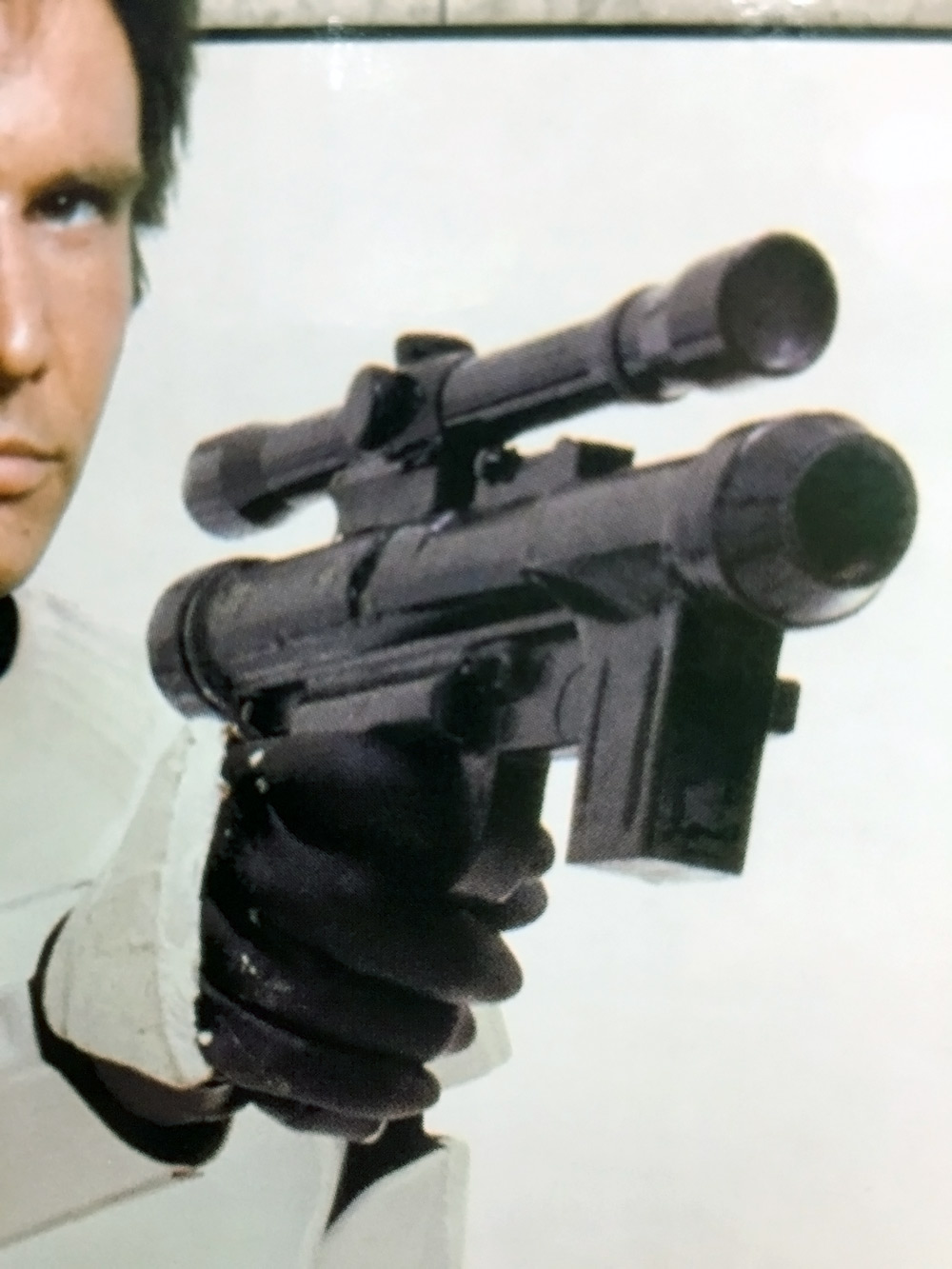 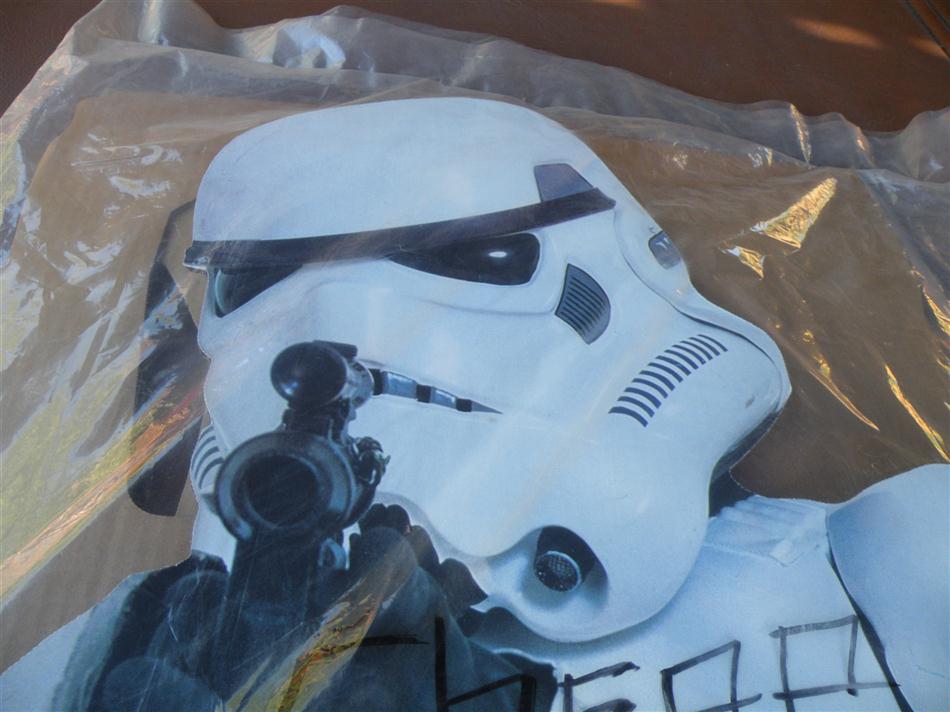 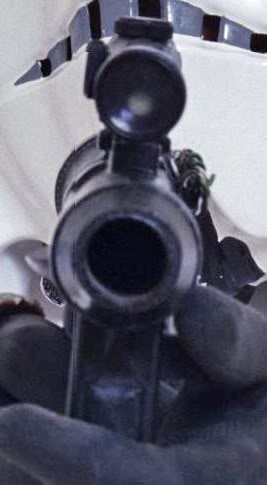 RPF PREMIUM MEMBER
I believe what you are seeing are red & green wires (just like the ones on an E-11) on the left side.
You can see them here in this frame grab when Dr. Evazan's are is cut off: 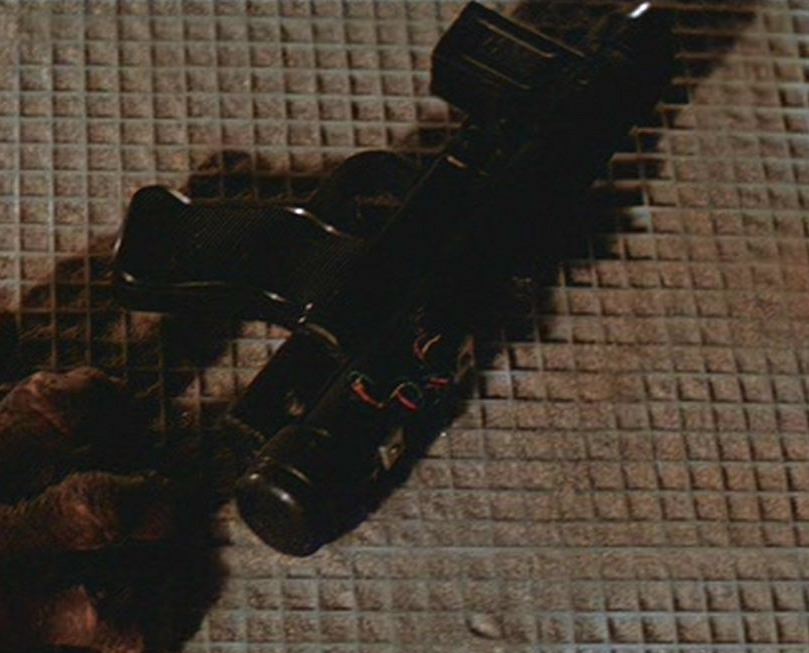 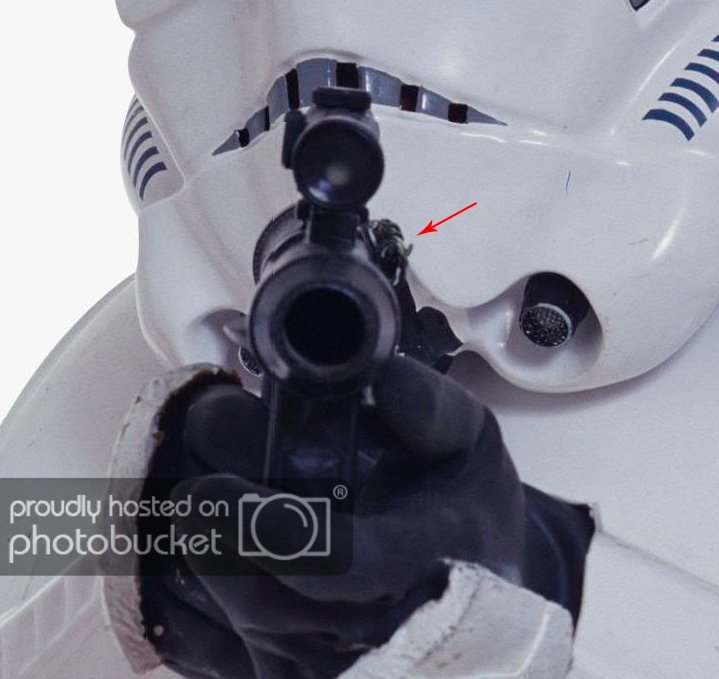 kurtyboy made an excellent replica of this back in '09: (I'll gladly remove it if you want) 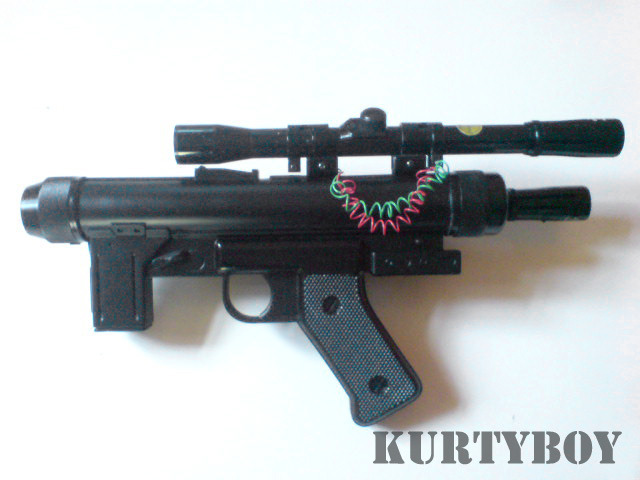 That scope is so vintage i remember having no luck finding anything like it. I ended up scratch building it like the rest of the rexim. 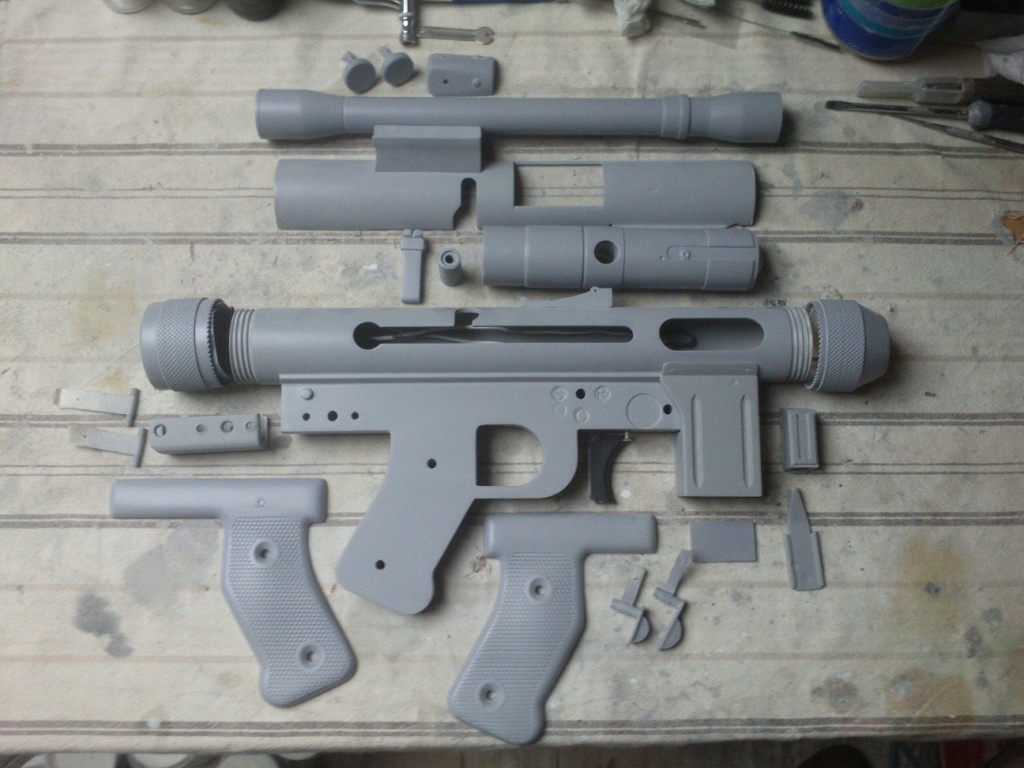 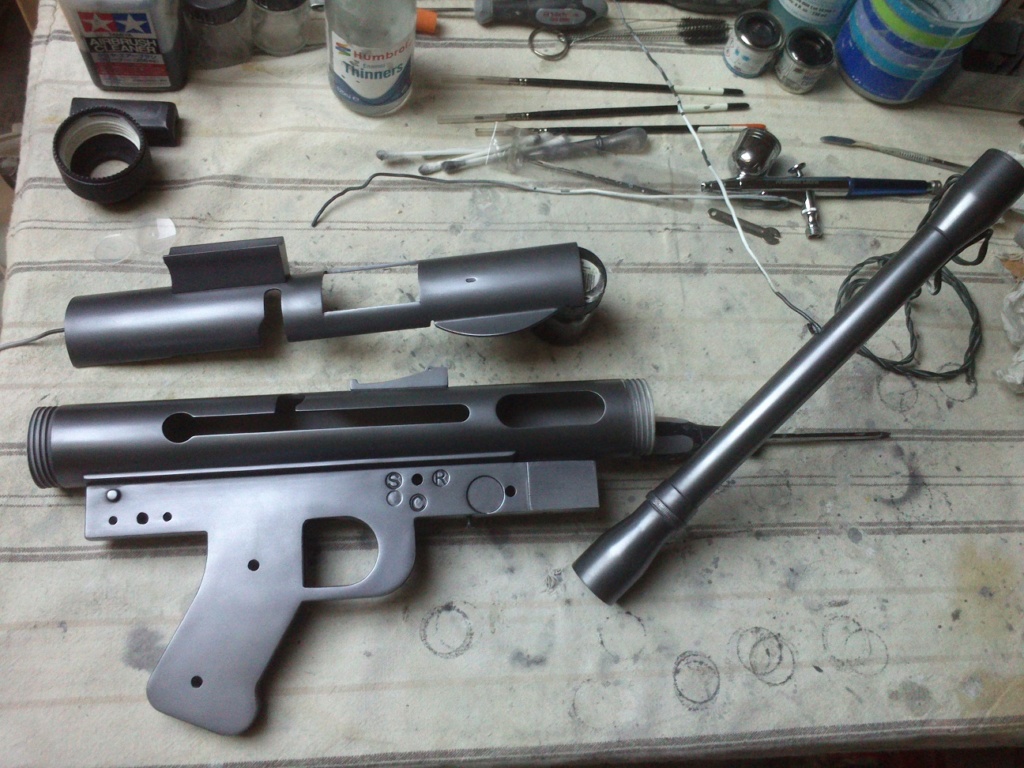 RPF PREMIUM MEMBER
Oh lord. I guess y'all wanna know what this is, don't you?

That's a beautiful job on that Rexim!

I've been working on mine over the past few months, and I thickened the trigger guard just like you have, and the scope mounting block I came up with looks VERY similar to yours!

RPF PREMIUM MEMBER
The scope is out there somewhere.
Emphasis on the "where."

RPF PREMIUM MEMBER
Sounds like he custom built it? It looks great!

Yeah, its a custom blaster I made myself.
The funny thing with this build is that the more time I spent building the Se14 the more interested I became into replicating the rexim favor. The rexim favor is such a rare weapon that I've never heard of anyone owning one, not even a decent replica of it. So I ended up making myself a foldable shoulder stock, along with the front parts of the rexim including a functioning bayonet. I'm not sure they work the same way as a genuine rexim-favor does because of the sparse references, but it was a lot of fun figuring my own design anyway. The Mud/Safety cover and inner bolt are also moveable along with the fire selector, magazine release, etc... Of course the issue is that I now had Se14 parts welded to the rexim-favor parts which turned it into an hybride of both (all the rexim parts can be stripped away from the se14 though).
Unfortunately I broke my airbrush during the paintjob and it kind of killed my momentum. I haven't resumed working on it since. 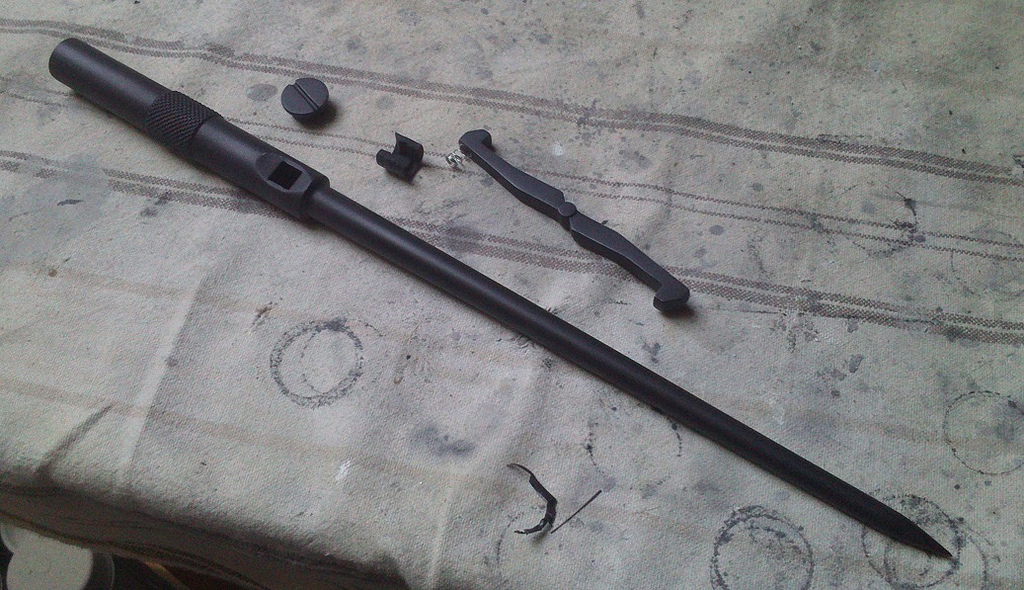 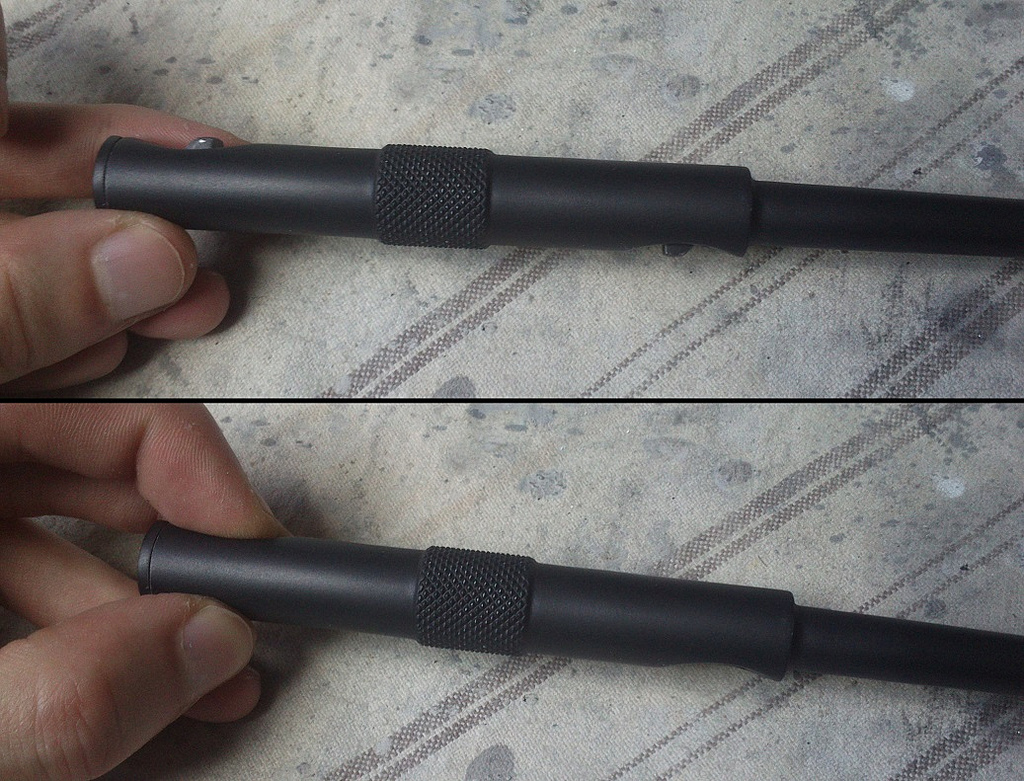 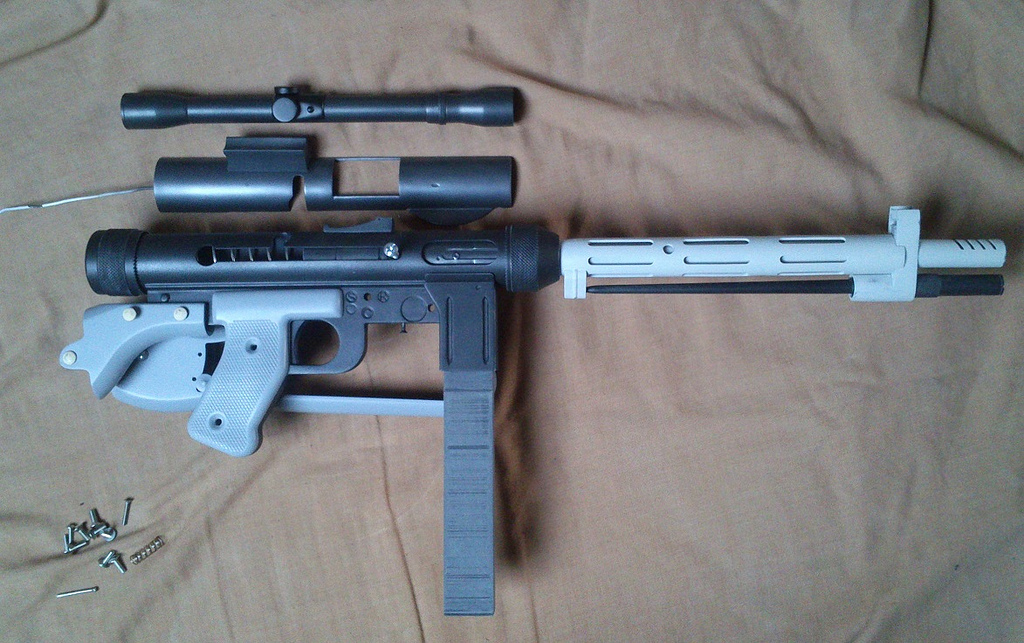 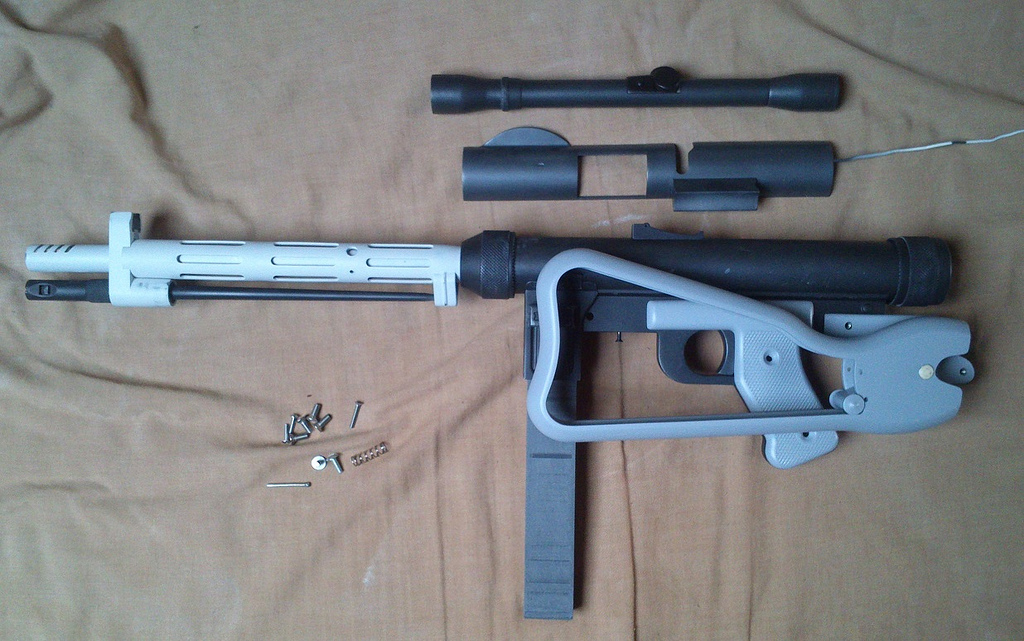 That´s awesome...tell us more about this, please!