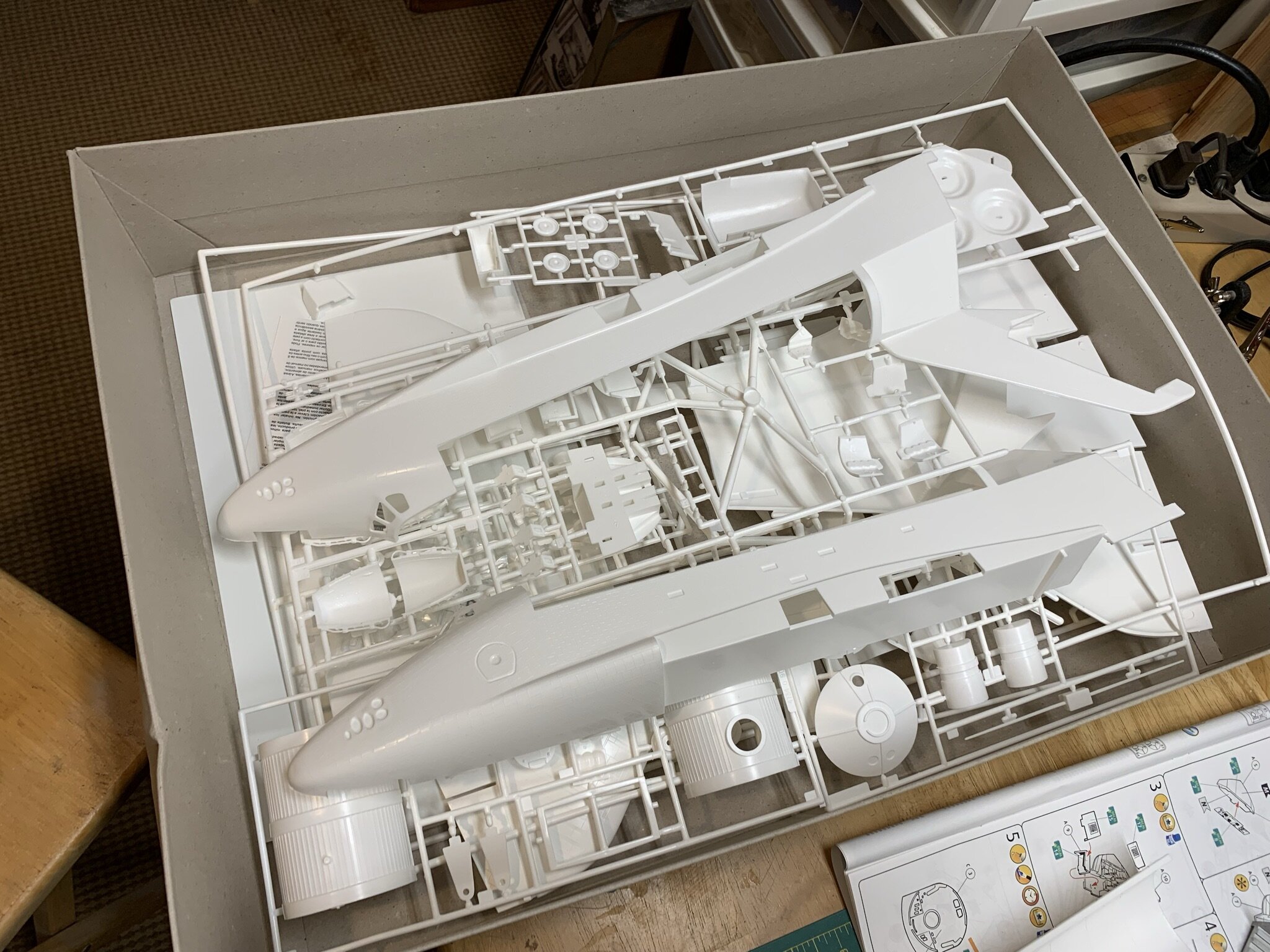 I had this kit when I was a kid and threw it together as fast as possible with minimal painting (hey, it was already white, all I needed to do was put some black paint under the wings). Recently I saw that it had been reissued and just had to build it again. This time I'll take my time.

It's a massive model- I forgot how big it was. 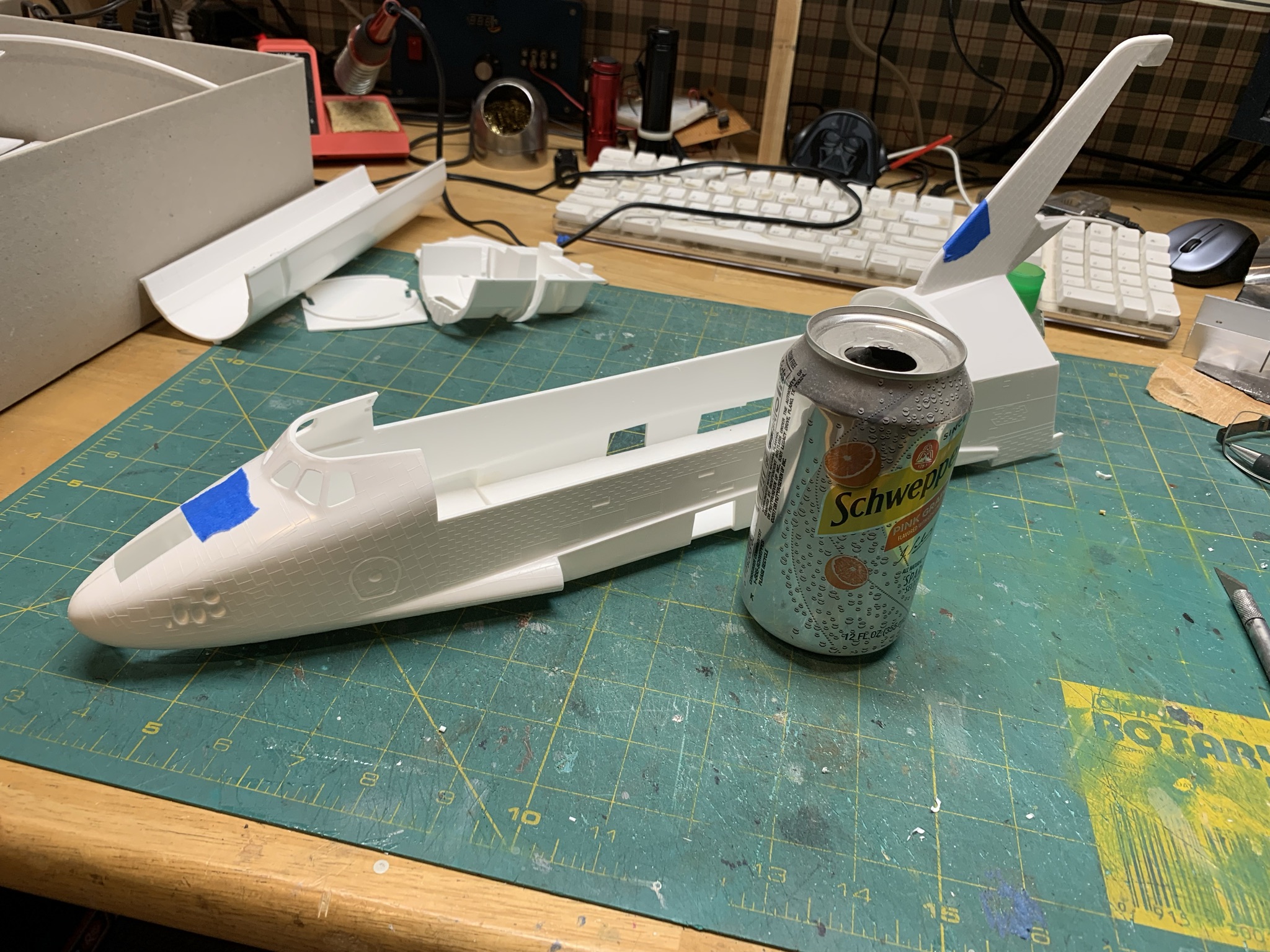 The detail is...okay. Definitely a kit from the 80's. There is an interior for the cockpit with the little chairs for the astronauts (which I think I'm going to skip). Since the windows are so small, you can't really see inside it anyway. That leads us to this... 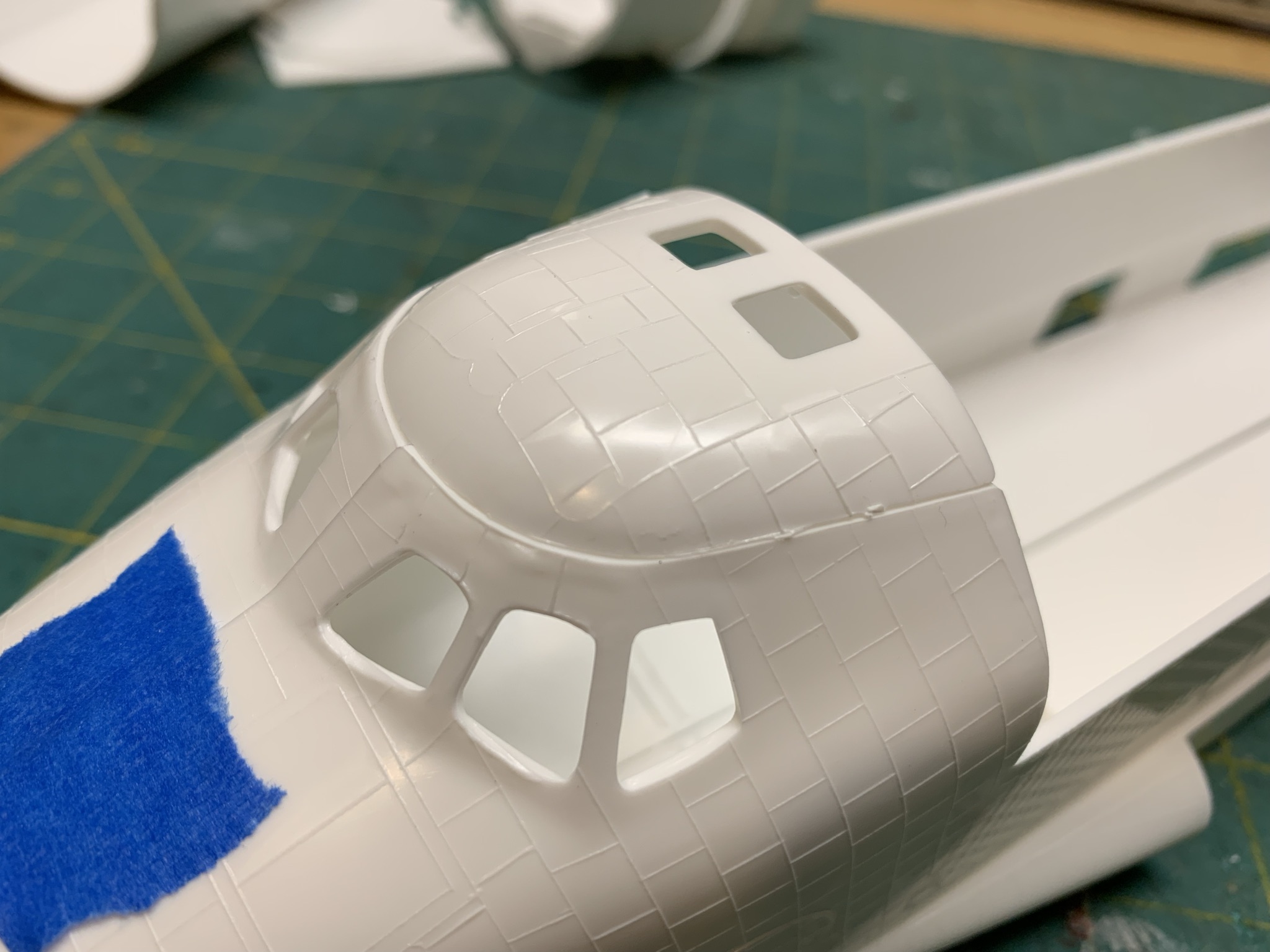 Ugh...that seam- with the tile detail it's going to be a PITA to get that fixed.

Am thinking that instead of detailing the cockpit, I'd rather detail the cargo bay. For a display, I'm planning something akin to the "in orbit" Atlantis at the Kennedy Space Center. Tilted at about 45 degrees, with the cargo doors open, with the robot arm lifting out a satellite. Maybe some illumination in the windows. Still deciding.

The cargo bay is pretty bare bones. One nice thing I've found looking at research pictures is that the equipment seemed to change on every flight, so there is a lot of room for creativity with the greebles. 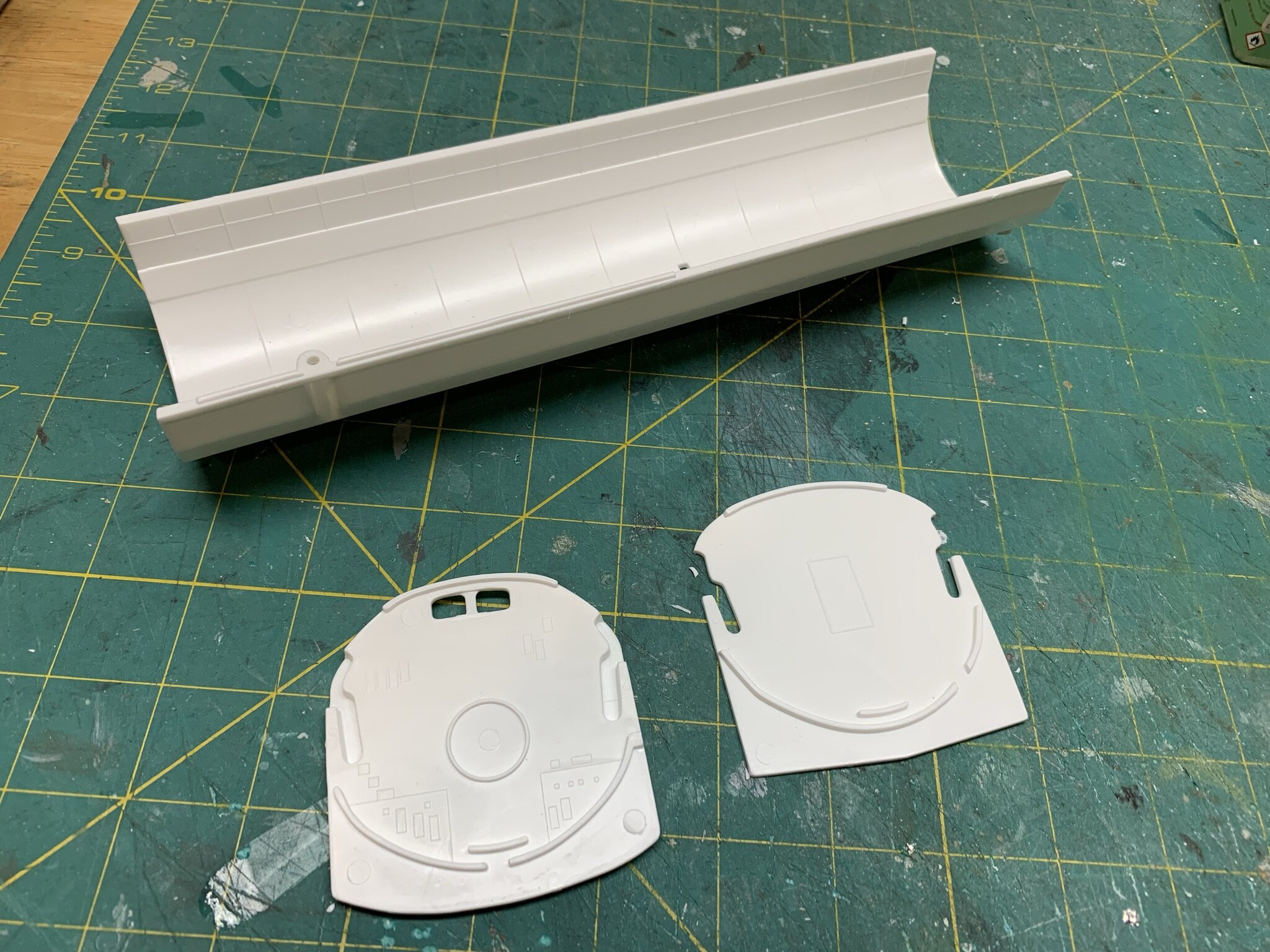 The cargo bay also seems to be covered in a white fabric, so will need to figure that out.

First order of business was to make a little satellite. I had an old space station model from the movie Armageddon that has yielded many interesting donor parts. With some help of my spares box, I kitbashed up something that looks pretty close. 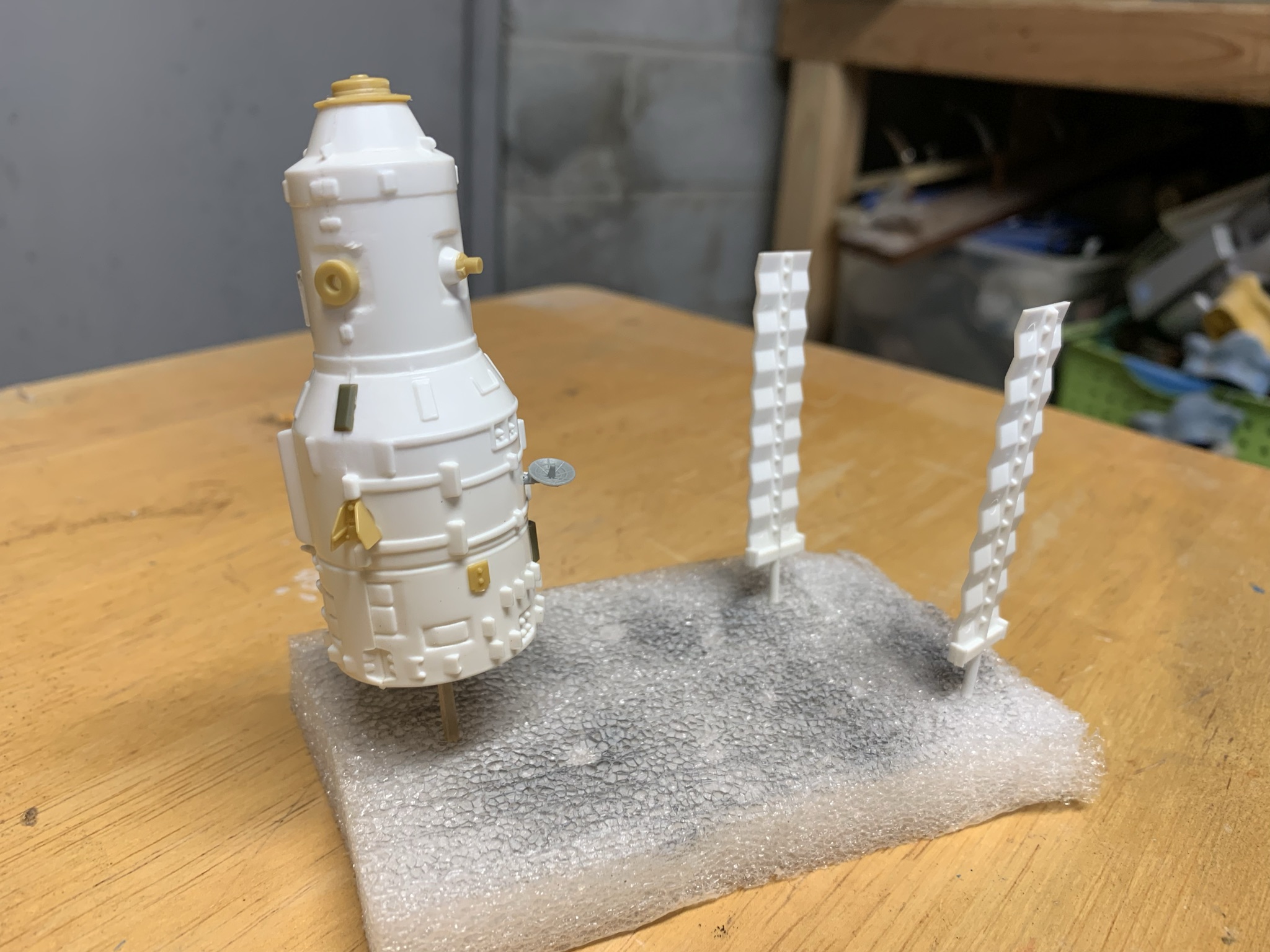 Those expanding solar 'wings' will stay off for now until it's all painted up. I want to be able to put everything inside the model and close the doors if I have to move it- with the wings permanently attached it won't fit in the cargo bay. The rest of the cargo bay interior is pretty bare bones as well- there's a telescope, some antennas and the ESA module (which I'll leave out). 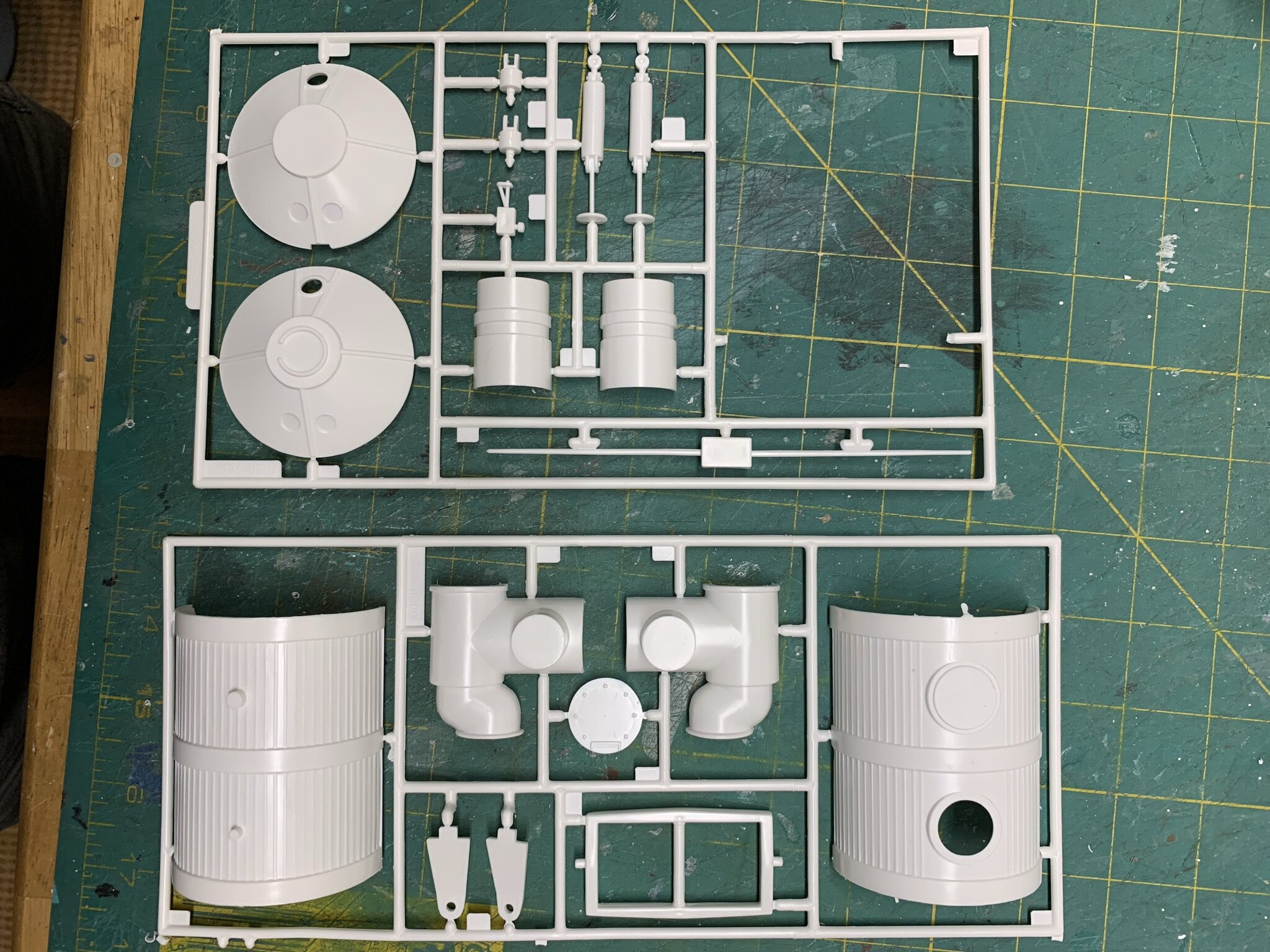 After some cutting down I opened up the rear portion of the cargo detail- will find some more donor bits from the space station to go in there. 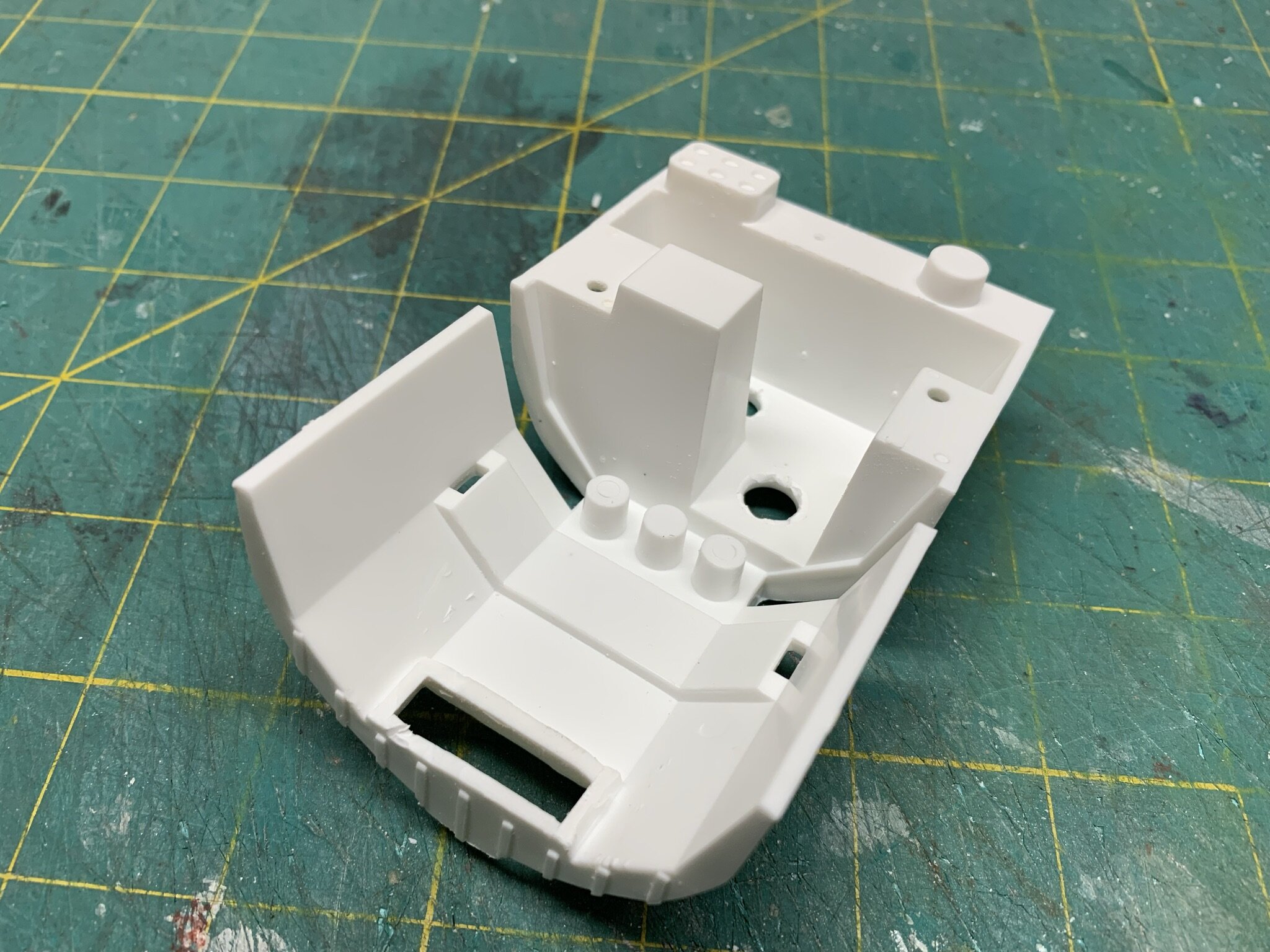 Thanks for looking- more to come...

Nice one! I didn't know they had re-released it. I may have to go find one. As for the tile details on the cockpit, you can get decals which would look better than the raised details, so you could sand it totally smooth and replace the tiles with said decals
Great job on the replacement details too

Nice.
I have an unfinished original sitting in a box in my laundry room.

Looking forward to see what you do with it.

I tested its glide ratio off our garage roof- not good…

RPF PREMIUM MEMBER
Loved that kit, but I think I had a 1/144 scale one from Revell.

Madhatter said:
Nice one! I didn't know they had re-released it. I may have to go find one. As for the tile details on the cockpit, you can get decals which would look better than the raised details, so you could sand it totally smooth and replace the tiles with said decals
Great job on the replacement details too
Click to expand...

Thanks- I will most likely sand off the raised detail on the white parts there. Not sure about the decals- I'm not a huge fan of the wallpaper method- after a while of doing those big sheets I lose the will to live. I might just go with a straight flat white and see what I can do with some pencil lines.

Got some more done on the cargo bay. In reference photos it looks like its covered in some sort of white fabric (makes me wonder how solid it is actually underneath all that). So I gently rumpled up some aluminum foil and then covered it with Tamiya flat white. 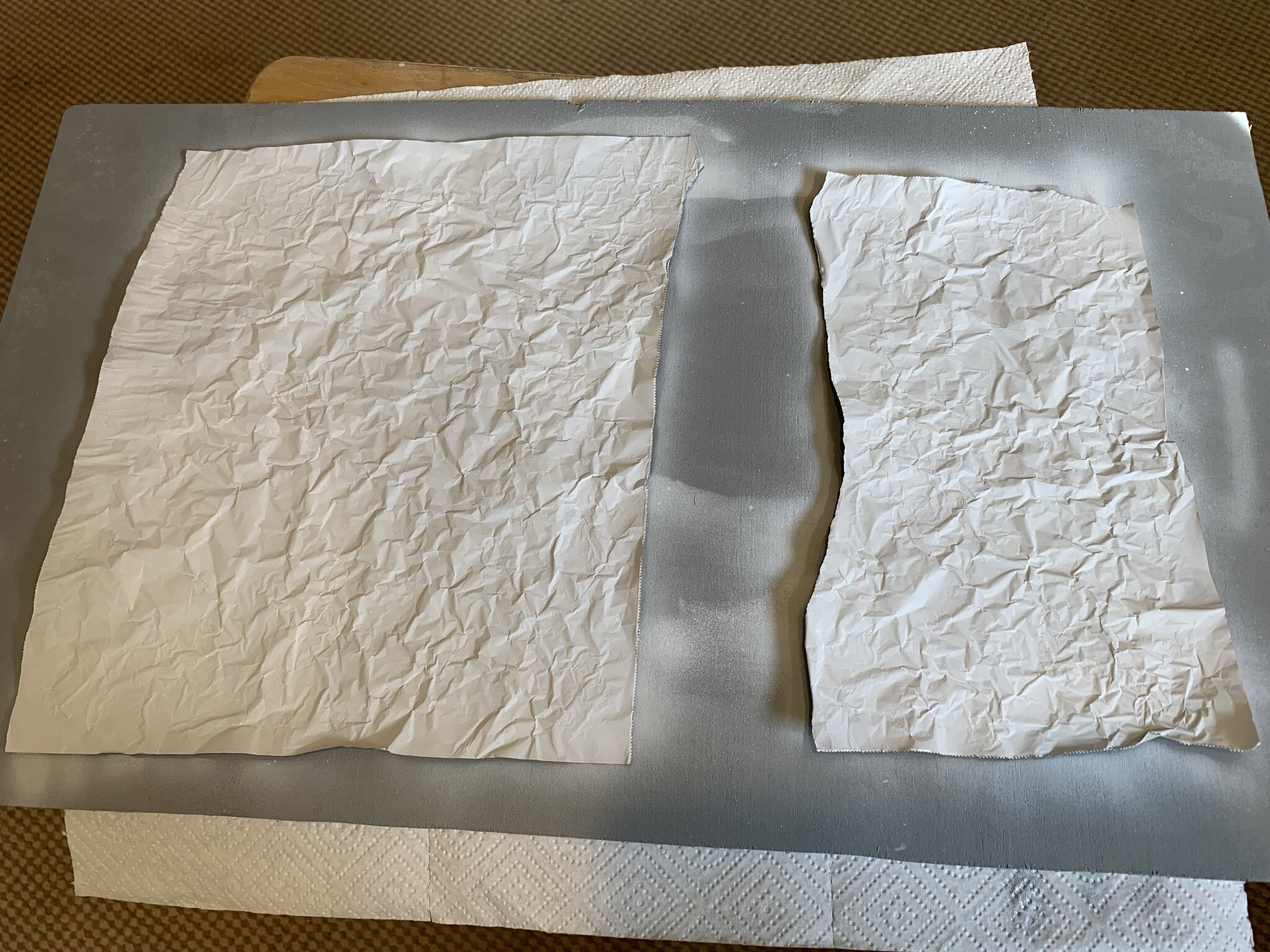 This went on the cargo bay pieces easily enough- hard to get it 'smooth' without it looking too flat. I literally just slathered on the super glue and hoped for the best. On the real bay there are squares of fabric split into a matrix pattern- that's a bit more detail than I care to reproduce. Just looking for something more interesting than straight painted plastic. 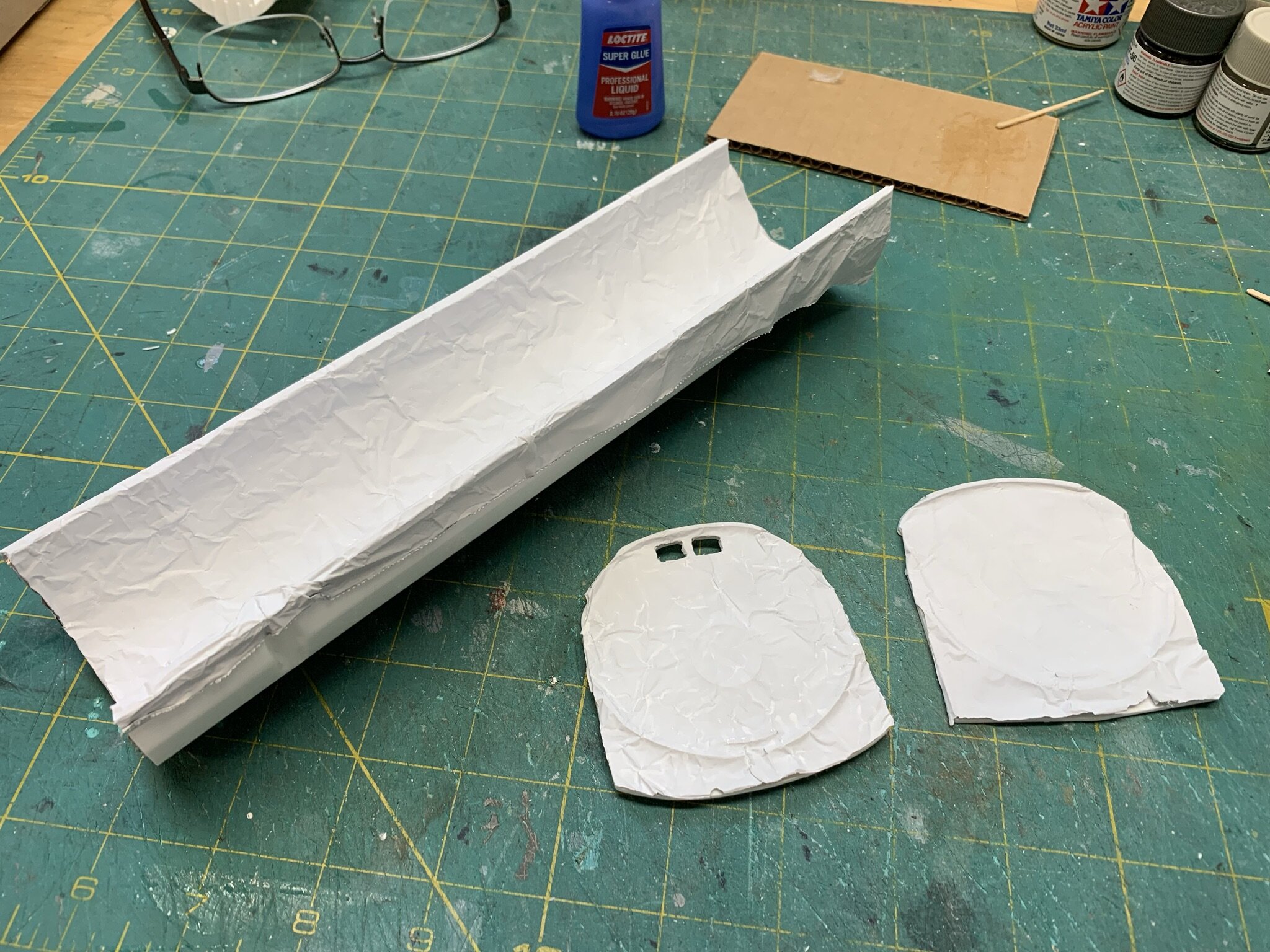 Another prominent feature I've seen are yellow grab bars all over each far wall of the bay. Some thin craft wire and Tamiya flat yellow did the trick. They seemed to come in 3 different standard widths, so it wasn't too difficult to bend up a bunch of them into reasonable matching sizes. 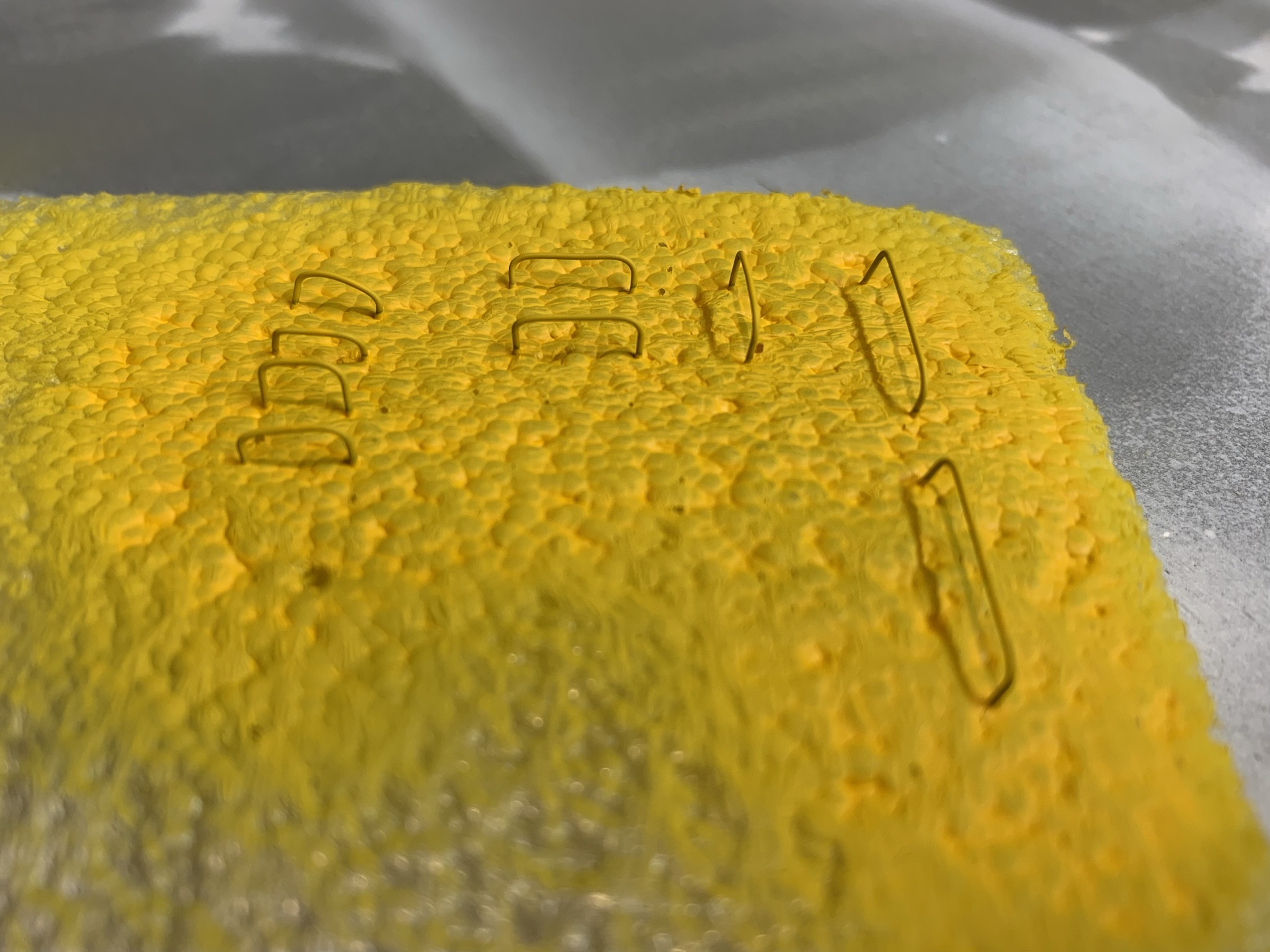 All assembled it's starting to look more like the real deal- most of the 'fabric' in the bay will be obscured by equipment. 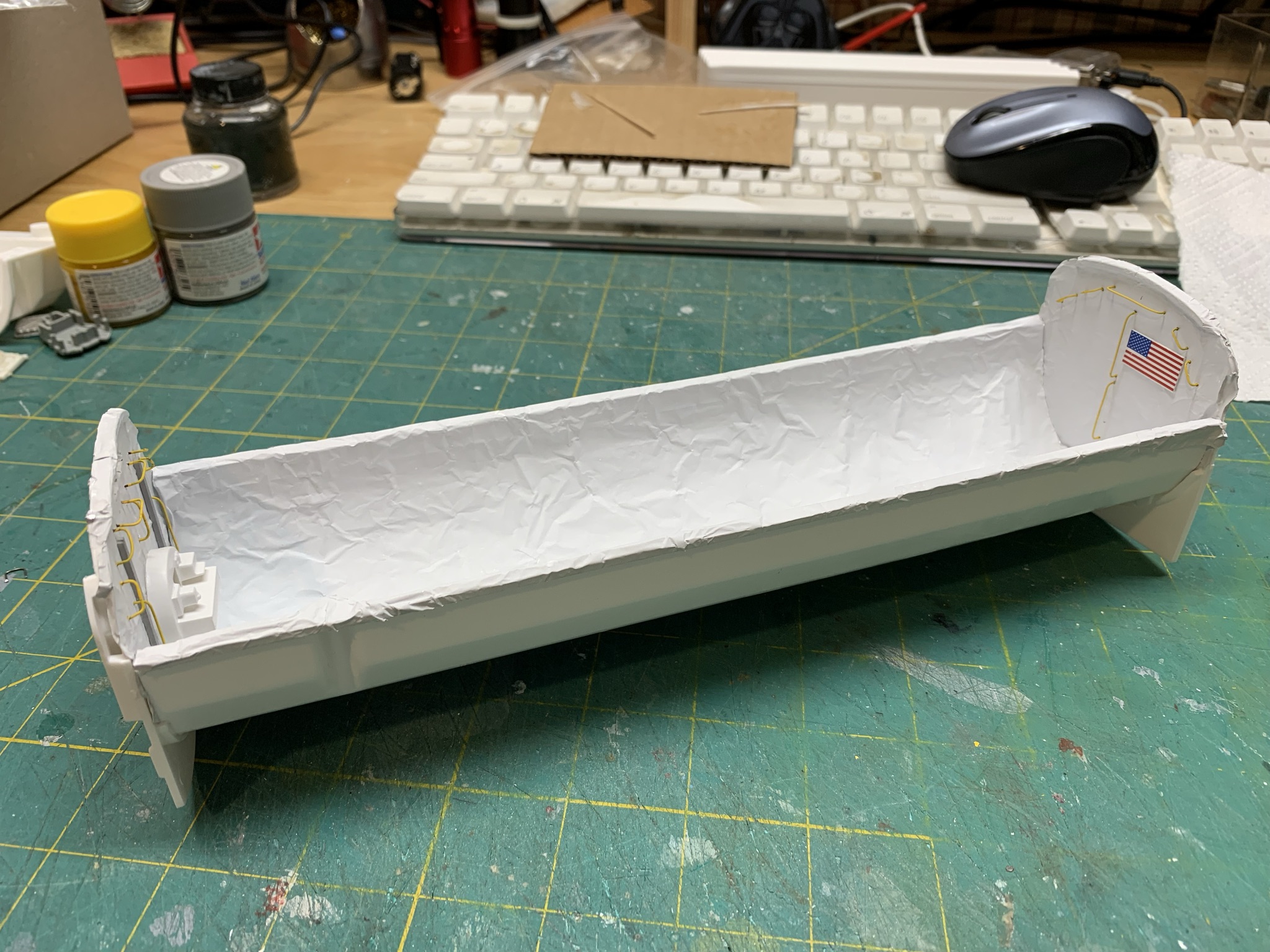 The American flag is prominently displayed on the rear wall- this is a decal that comes with the kit. I didn't want to apply it directly on the uneven wall surface so I put it on a little chip of styrene first. Came out okay I think- nice to see some color on the model. 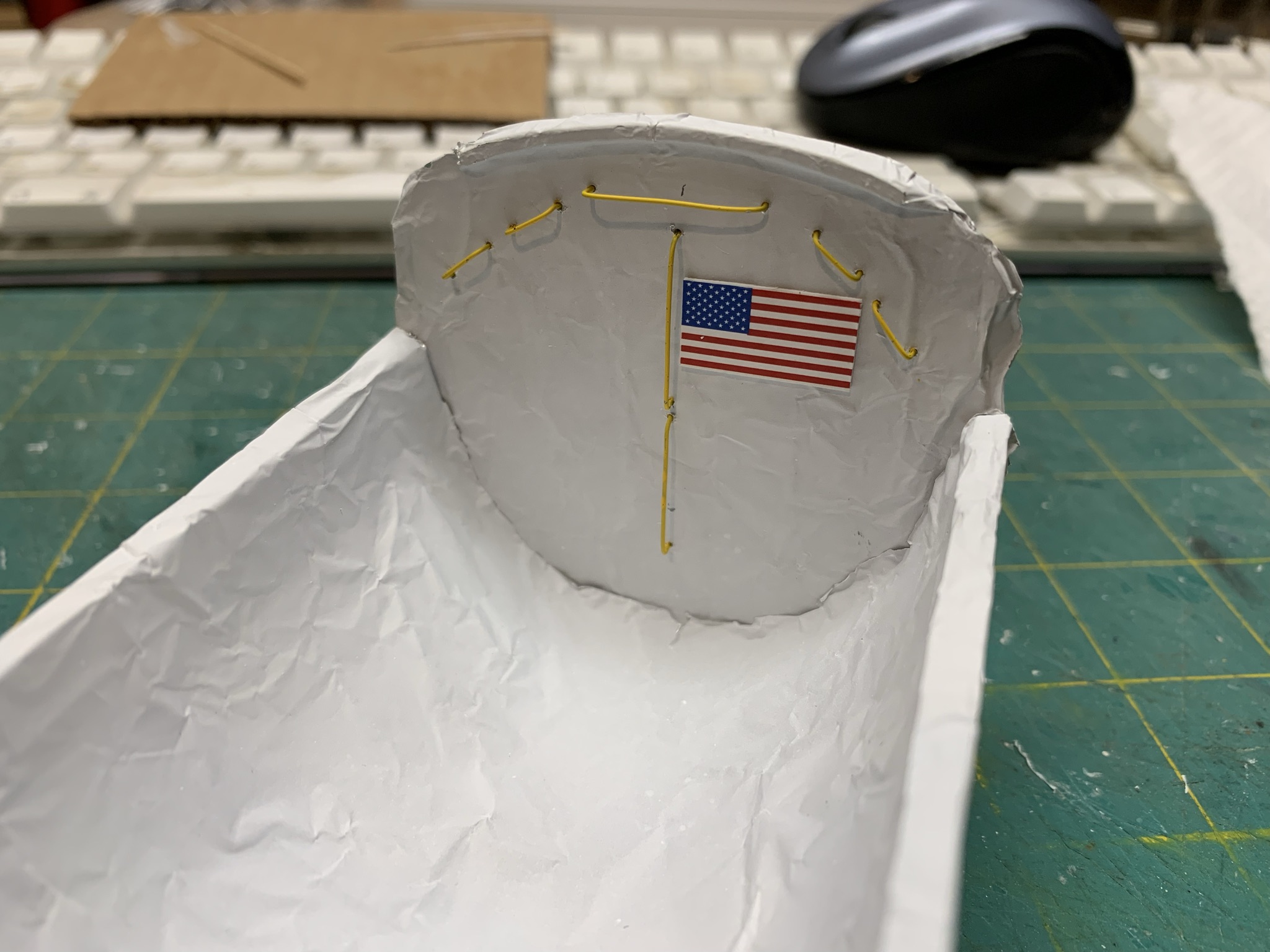 Another space station donor part made for an interesting 'hatch'. Tried out some Rustoleum spray "ultra matte" on it to see how it looked- seems kinda plastic-y still in my opinion. Might need a wash or something it to tone it down. Worst case I just brush on some Tamiya flat white (that stuff is amazing). The rails came out pretty symmetrical- totally eyeballed their placement. I will probably put a piece of frosted styrene behind the windows- without an interior I'll just want something that lets some light though if I decide to light it up. 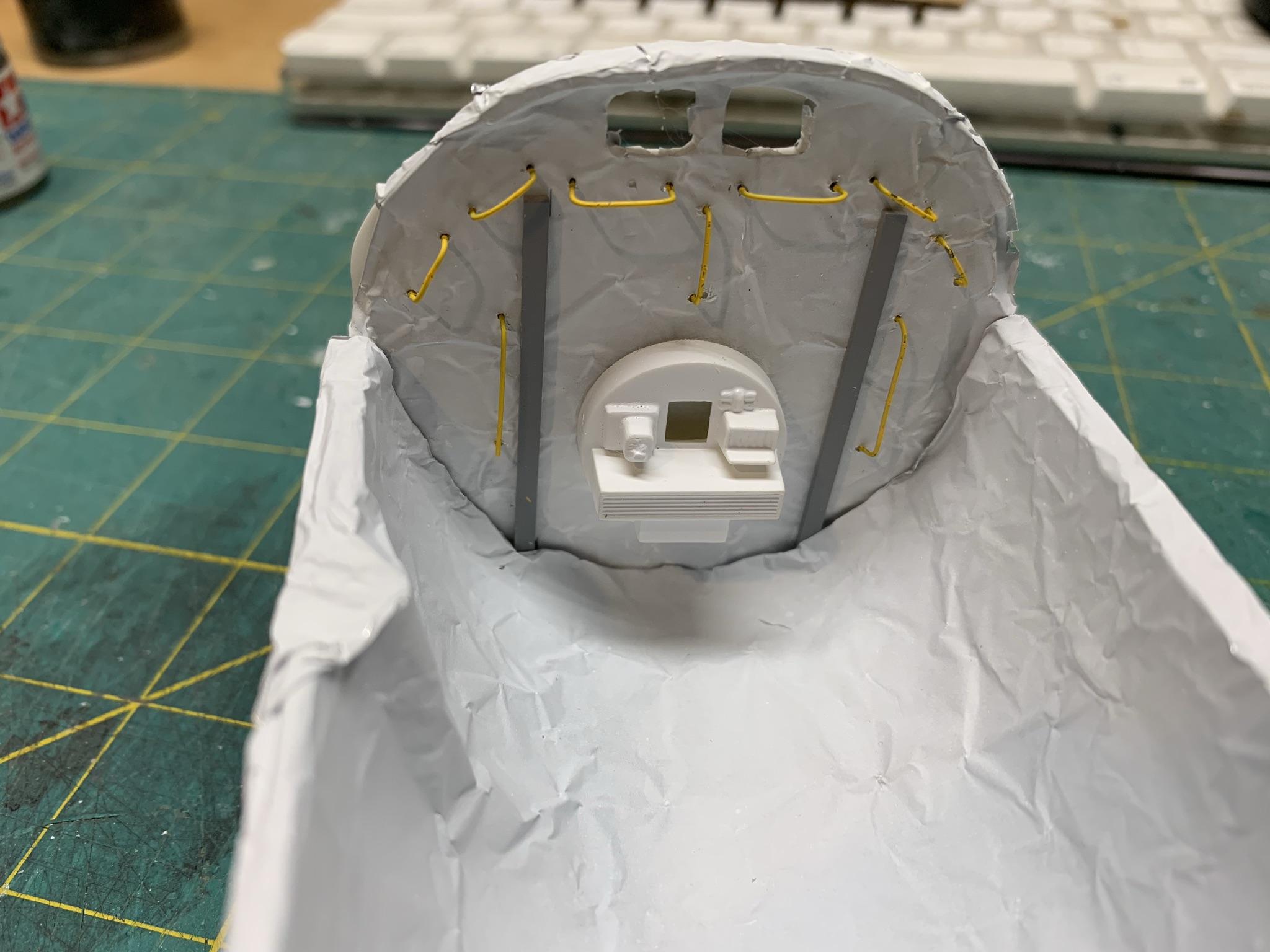 Also put a little paint on the satellite...might do a little weathering on it- everything is looking so...white right now. Too clean for my tastes.

Very nice start! At first I thought you had poured gipsum into the cargo bay. This looks very interesting.

Galactican said:
Very nice start! At first I thought you had poured gipsum into the cargo bay. This looks very interesting.
Click to expand...

Thanks! Yeah when all is said and done it looks more like white paper than fabric but it molds a lot better to the curves of the bay. I always build my models to look good at a few feet- it hides all the mistakes!

Got back to the shuttle after a little delay. Spent a lot of time trying to decide how I wanted to do the interior. My original thought was to ditch the cockpit entirely and go with translucent windows, illuminating them with a small LED strip. But the more I looked at how the model went together I had doubts how well it would turn out. The entire body of the shuttle is two halves and I'd end up having to build a custom light box just to avoid having to light block the entire front of the thing.

After some test fittings, I realized it might be easier to just assemble and attach the cockpit interior to the inside wall which is one side of the cargo bay itself. 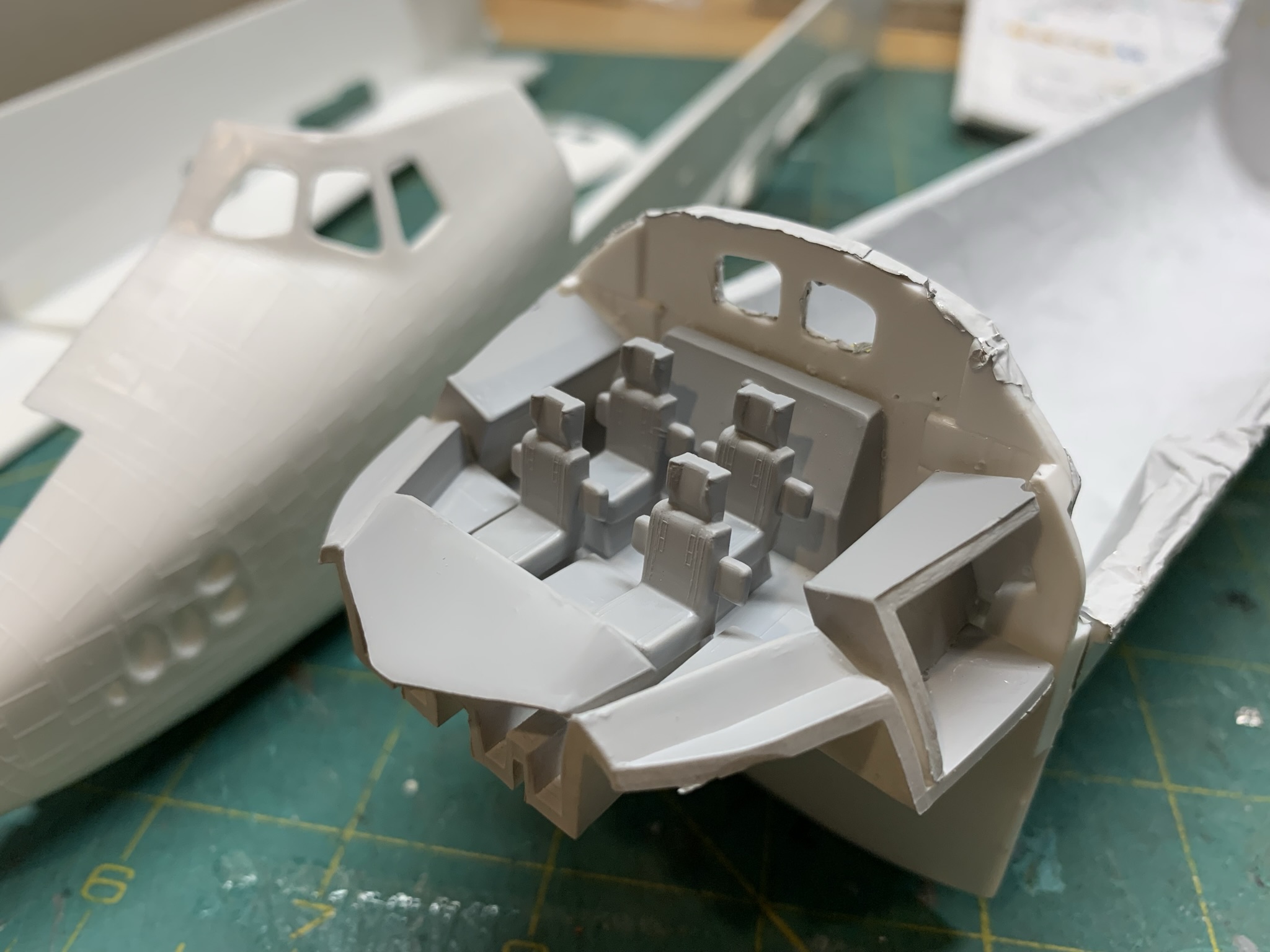 I decided to just go with a few LEDs for interior lighting, forgoing the LED strip. I like the warm color of the LED strip, but I just couldn't find a good way to use it with the cockpit interior without it being visible. I also was afraid of having too much light- in all of the shots I've seen of the Orbiter in space, there is no illumination coming from the windows. I guess that makes sense since it's dark in space, and if you've ever tried to look out of a window at night it's much easier to see things when the room lights are off.

Using the cockpit interior also made the light blocking simpler. 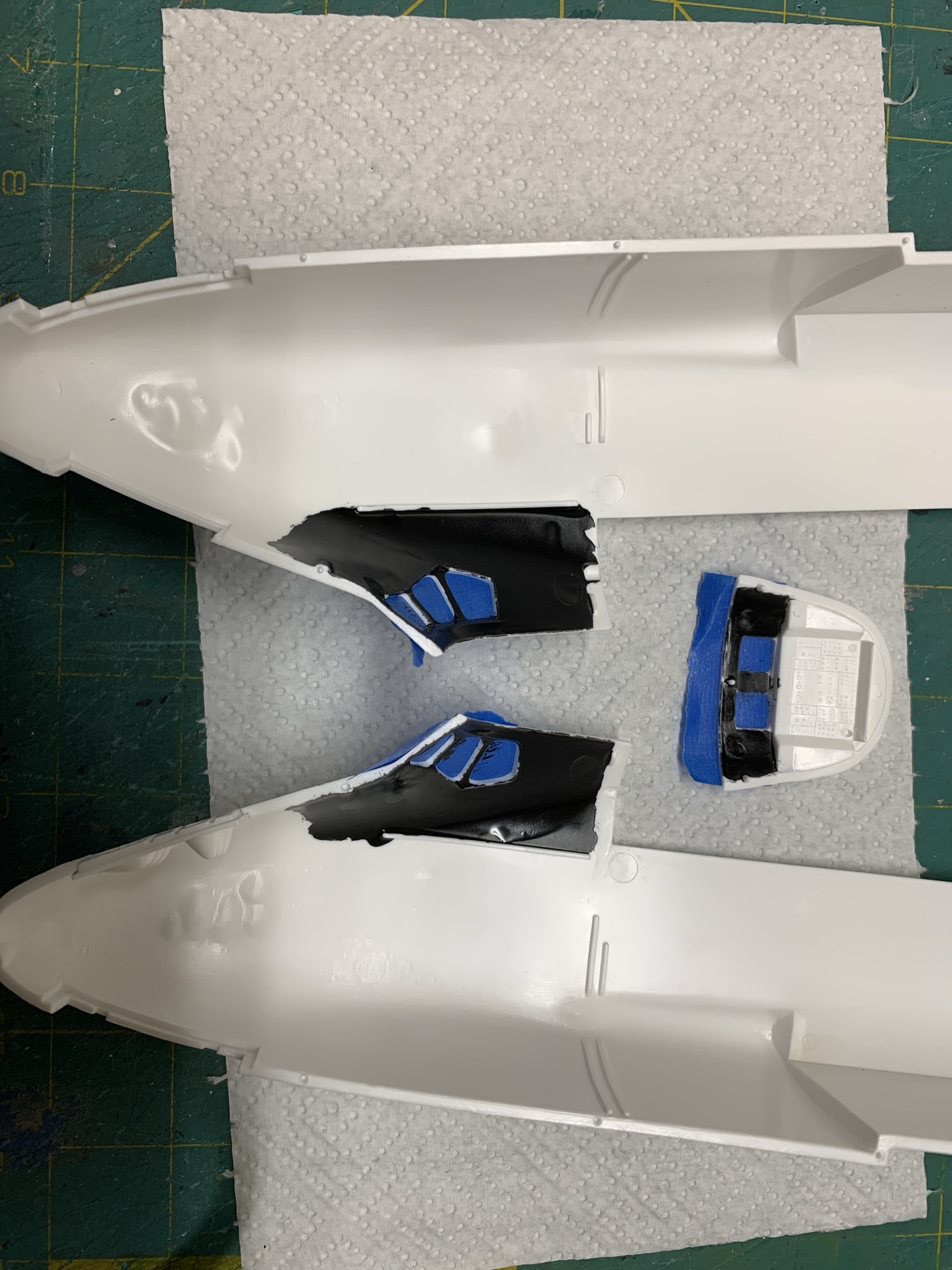 After I got done light blocking the interior back wall it occurred to me that the other side was covered in aluminum foil- so that wasn't strictly needed! 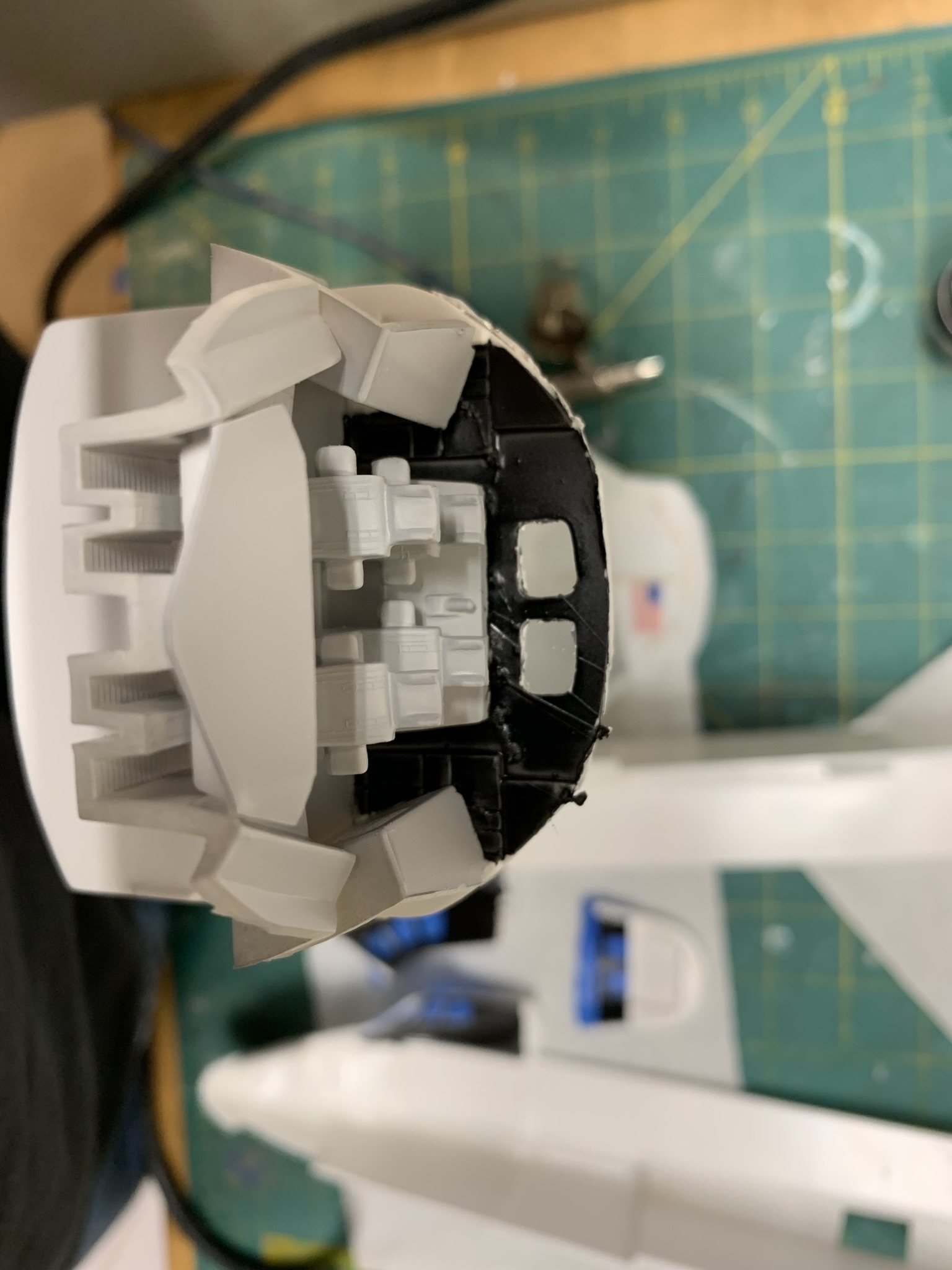 Because I plan to use the windows there won't be much to see inside the cockpit anyways. I'm basically going for vague shapes that let you know stuff's in there when the lights are on. There are some very nice decals that come with the kit for all of the control surfaces. I picked a bunch that I thought might possibly be seen from the windows. I also painted the seats but didn't go crazy making it perfect. 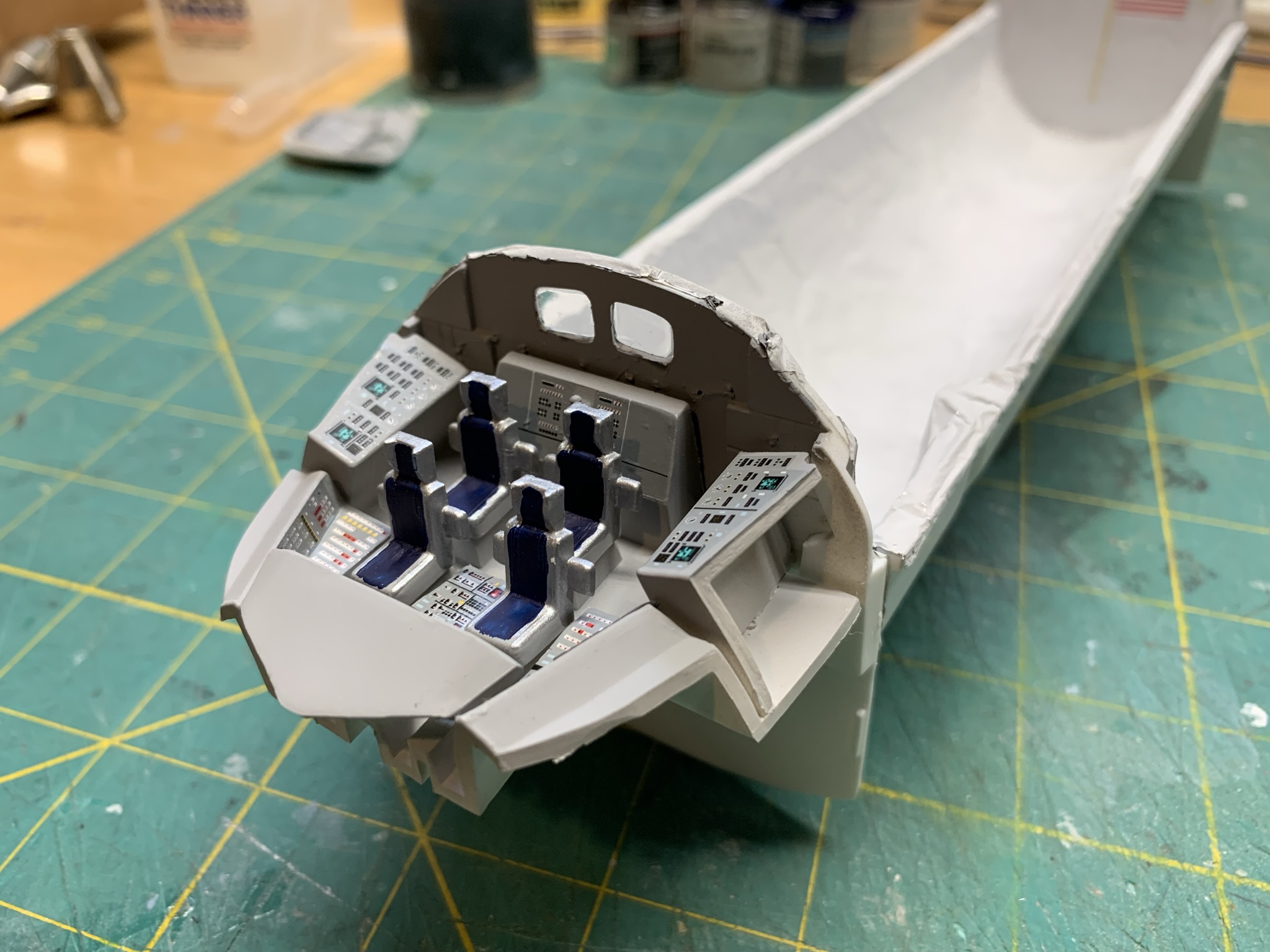 Three 3mm white LEDs felt about right. I never like to use discrete LEDs inside models without first grinding down the lenses. Otherwise I find they throw off way too much light and you get these hotspots. Rubbing them on some 100 grit sandpaper for a bit takes down the lens and roughs up the surface so it scatters the light really nicely (you just have to go slowly and make sure you don't wear down to the diode itself). 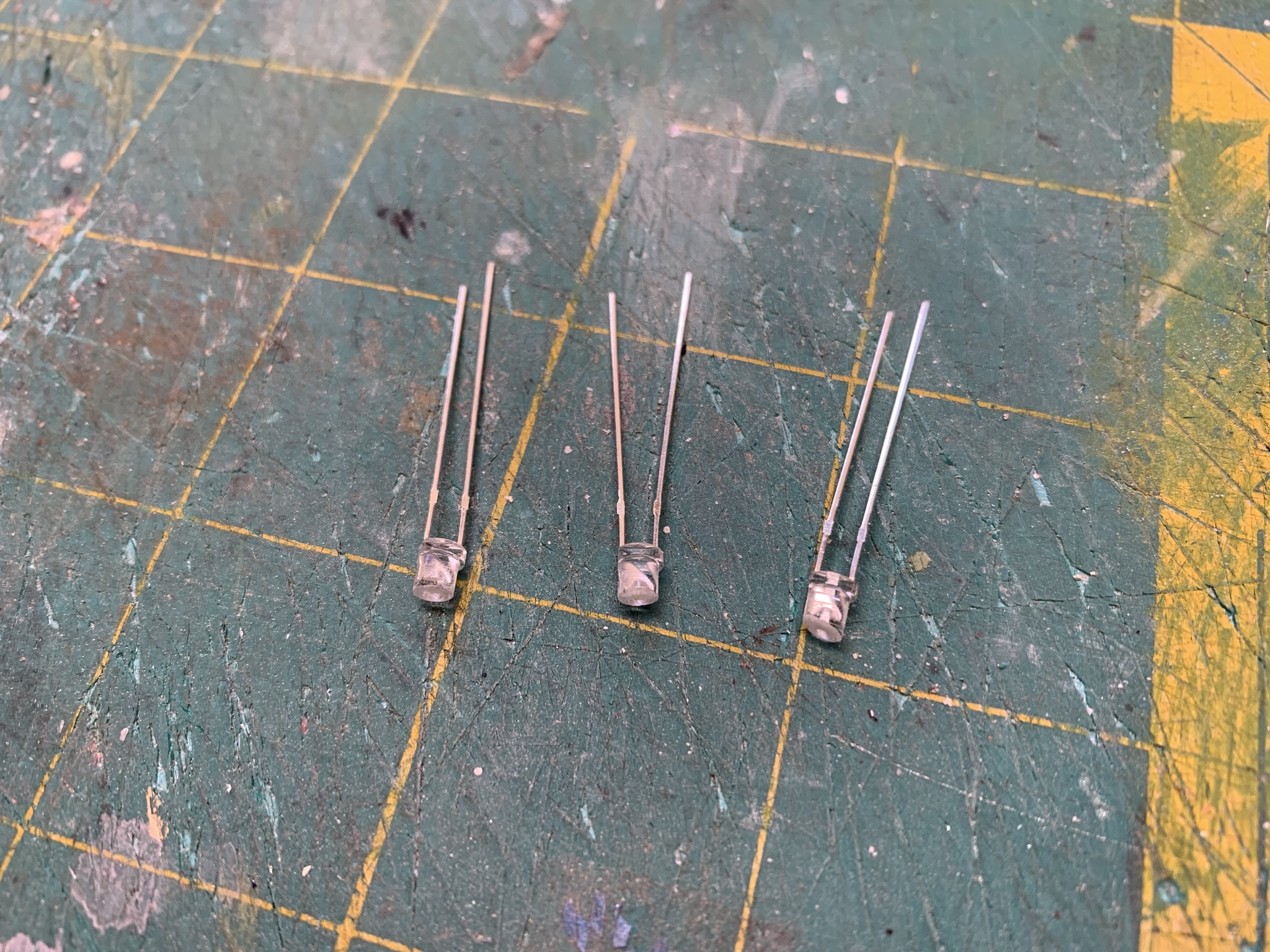 I decided to install them on the front and two side consoles. This would give a 'heads up' illumination while the sides would add some 'mood' lighting. 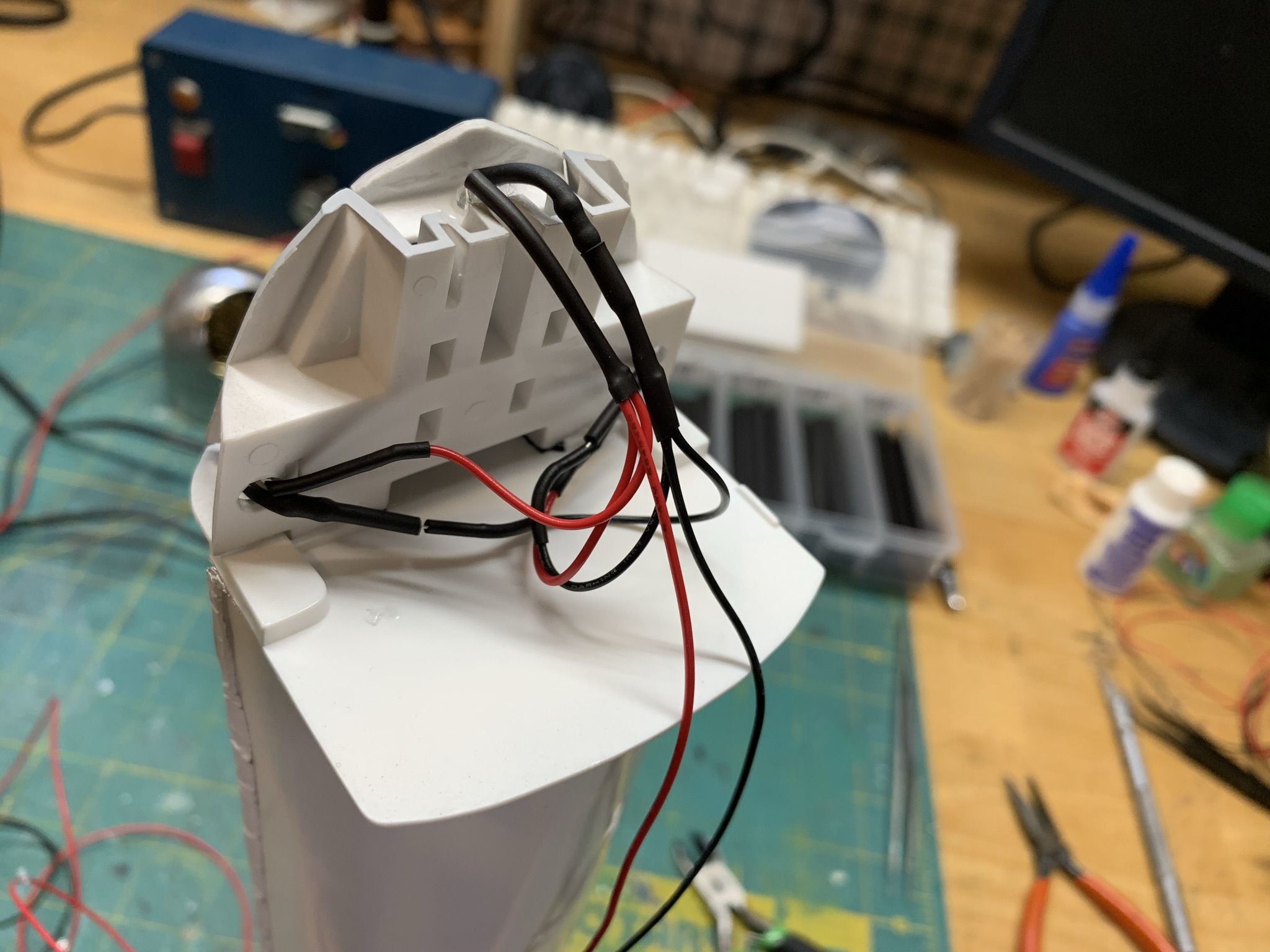 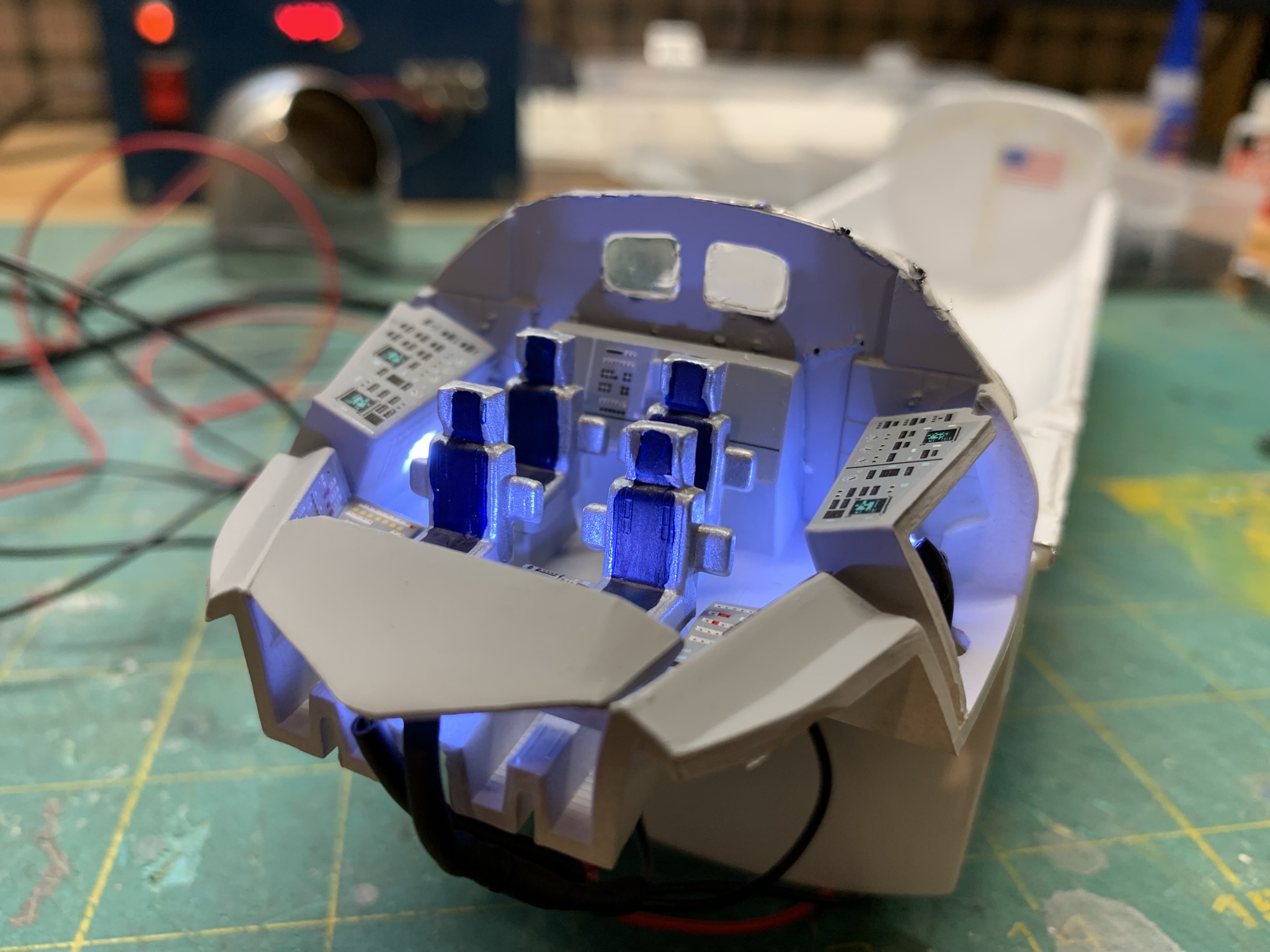 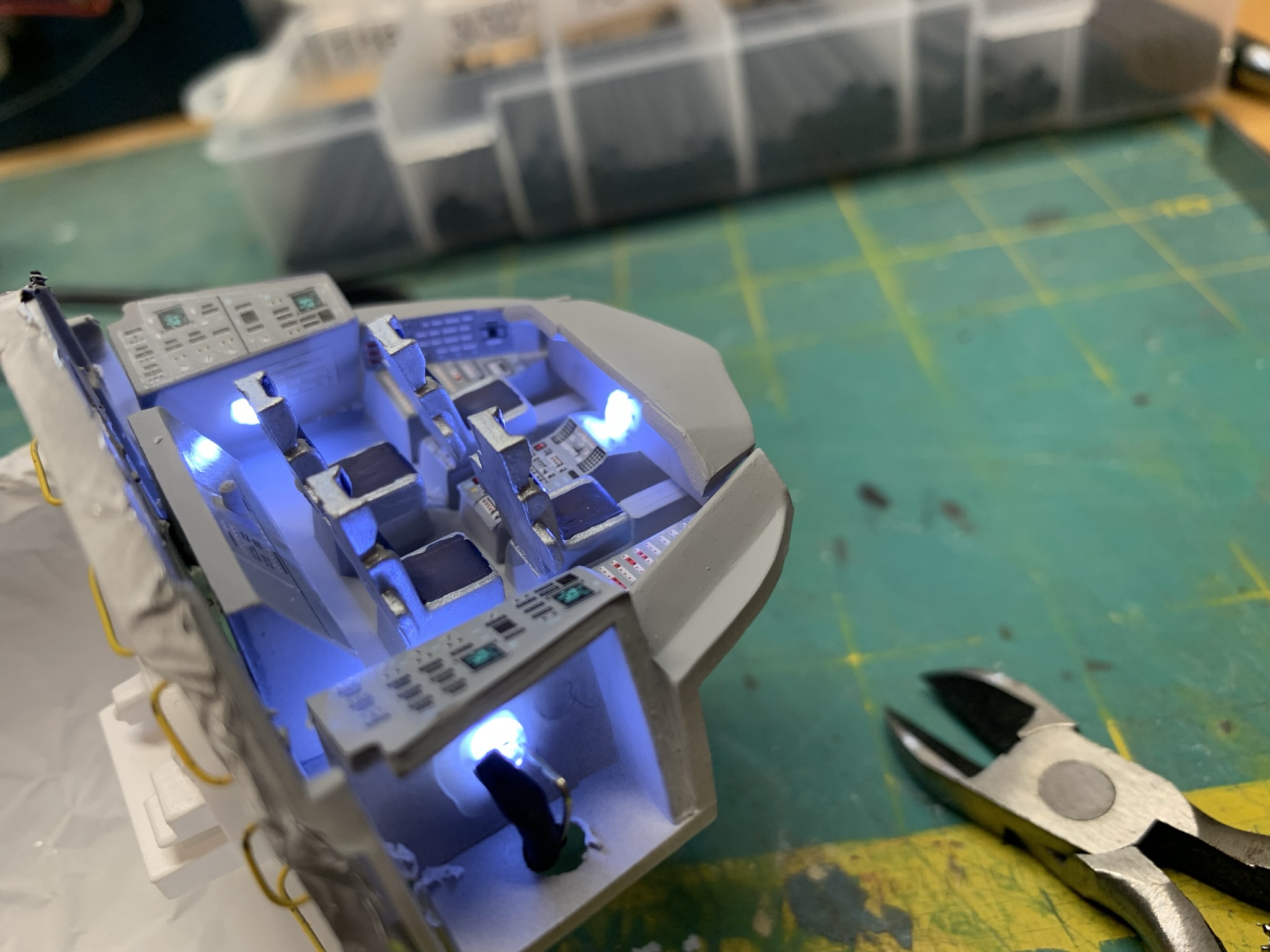 And finally, some a rough test with the body assembled. This thing definitely goes together with the precision of an '80's kit. I have a lot of putty work ahead of me... 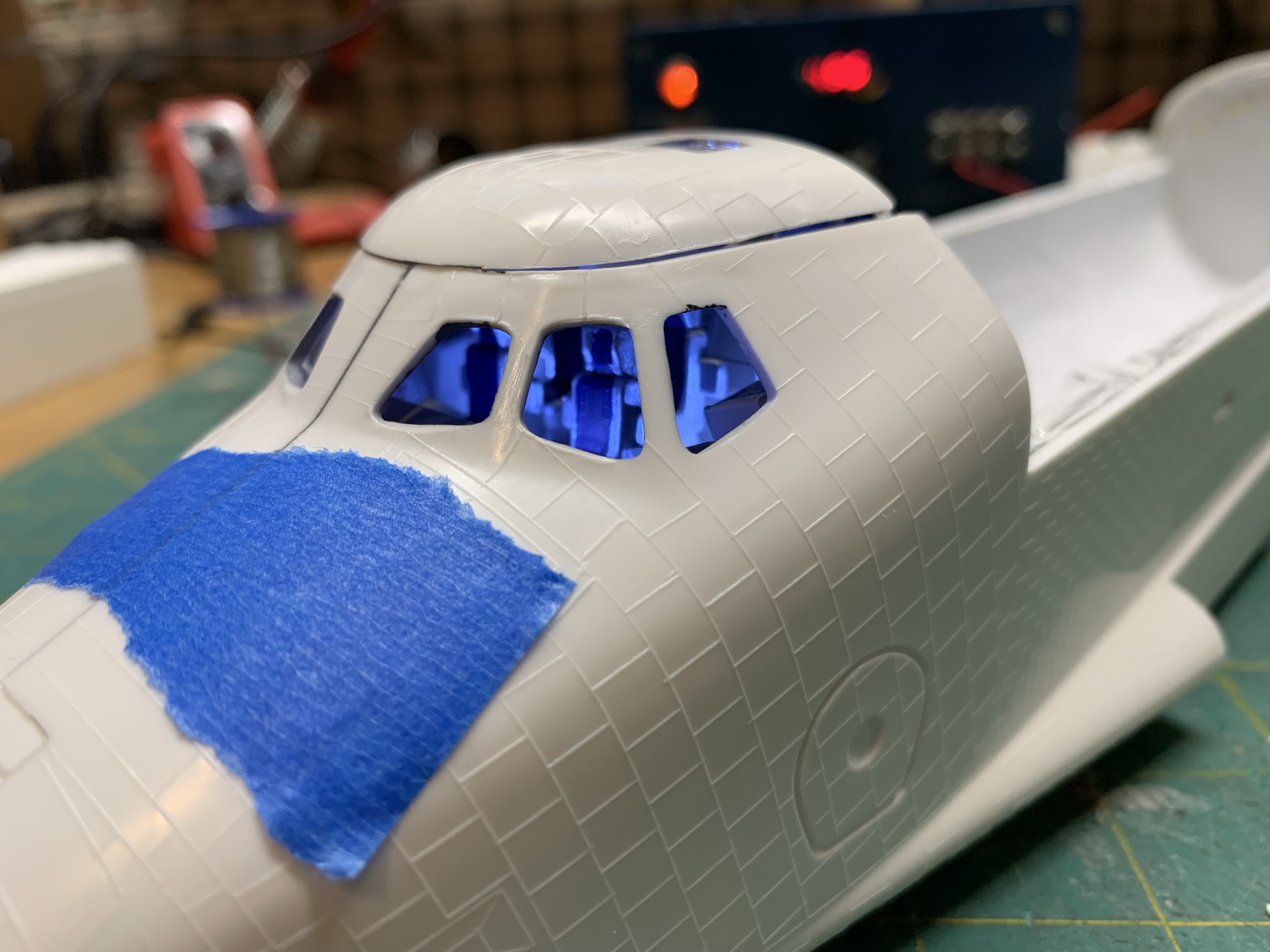