This is a super quick build for a Resident Evil (Biohazard here in Japan) themed shoot that I will be directing in two days.
Yup, two days to build the VP70 M so here goes!

The idea is to make a 'clam shell' upper and lower receiver that will sit over an existing airsoft gun, most likely a shorter barreled Glock or a smaller Beretta.
The VP70 magazine does look similar however to the SW M649 and those are really cheap here so maybe I'll try one out as I haven't used that pistol for anything before and as this is a low budget, fun project, it doesn't matter if it only lasts a little while.

I will however mold and cast the finished VP70 M when its done, probably with a stock too if anyone is interested.

And yes, I am most definitely aware that this is the 'official' side arm of Marines from Aliens, I just so happen to be doing the Resident Evil Leon Version (named Matilda haha).
Last edited: Jan 30, 2019 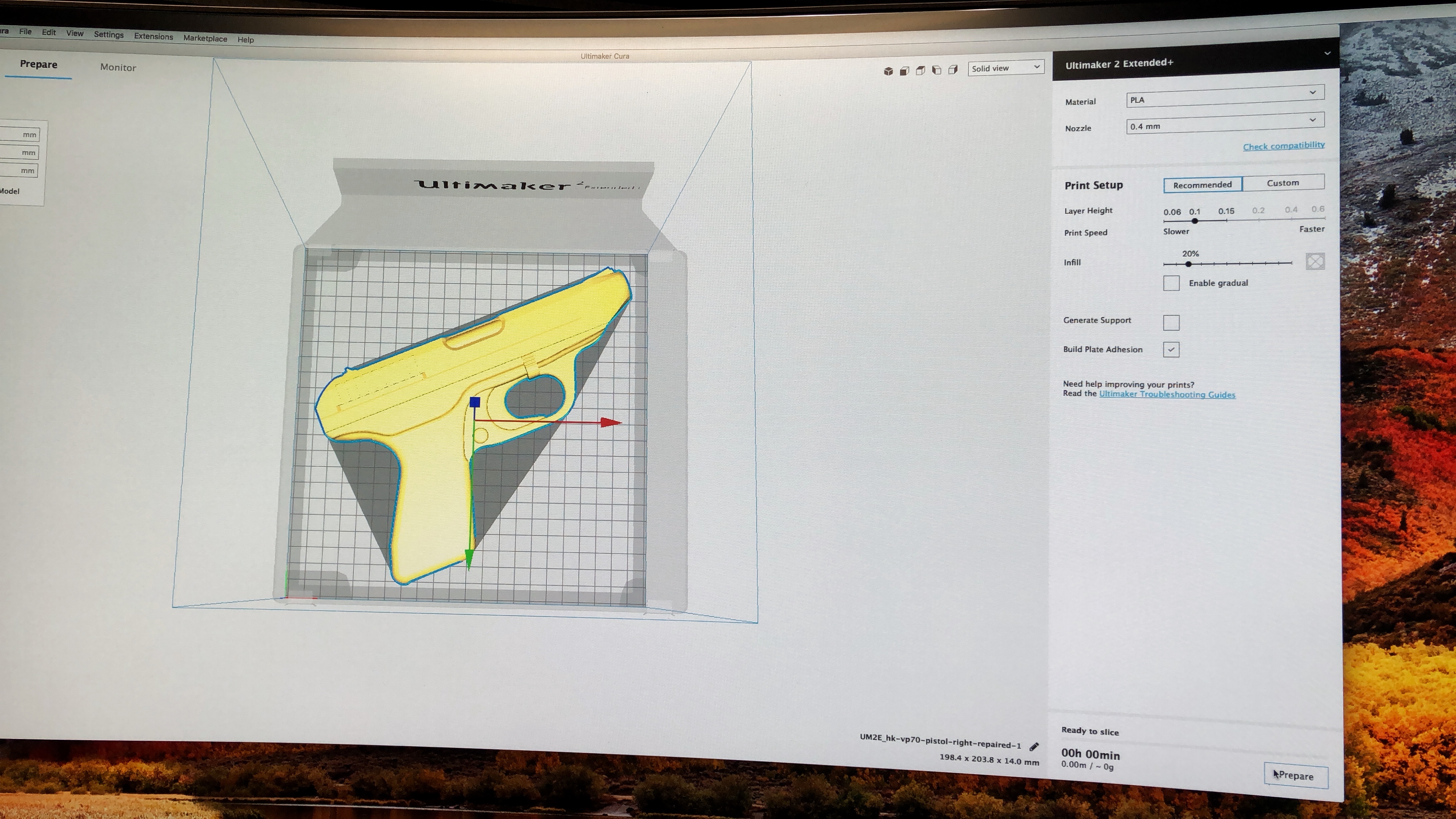 And after some (read LOTS) of experimenting with the settings and two failed prints, I had one half done! 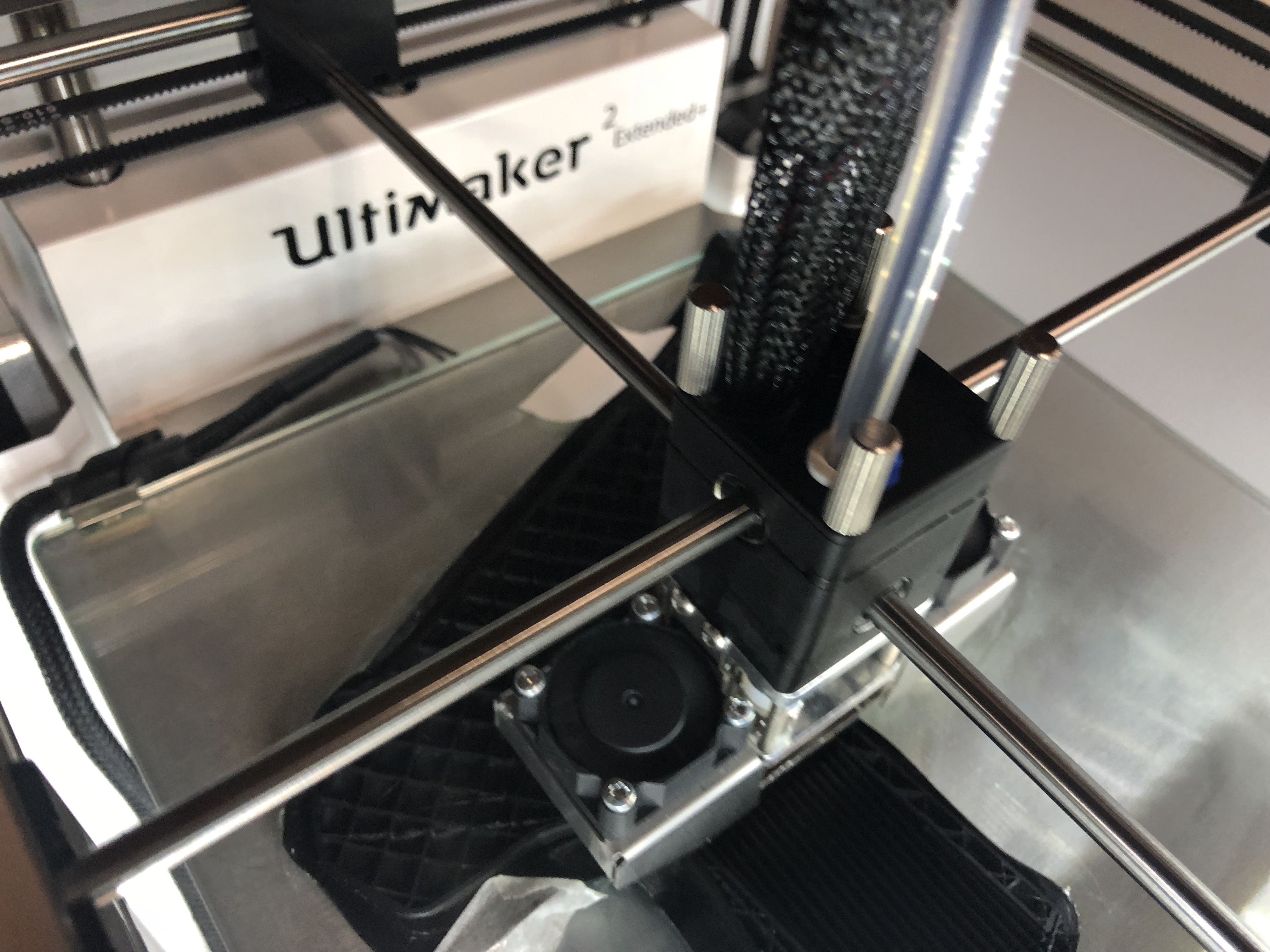 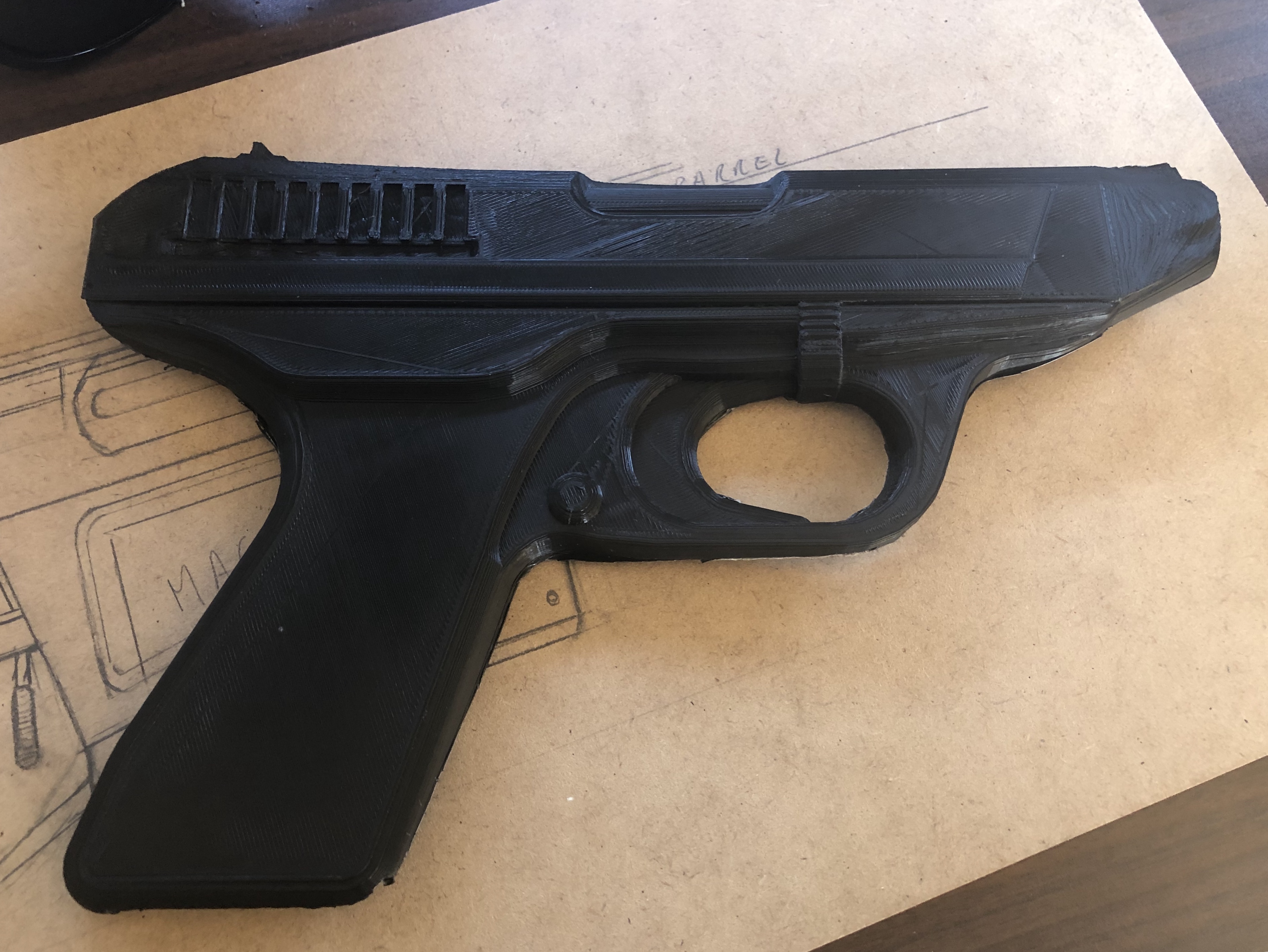 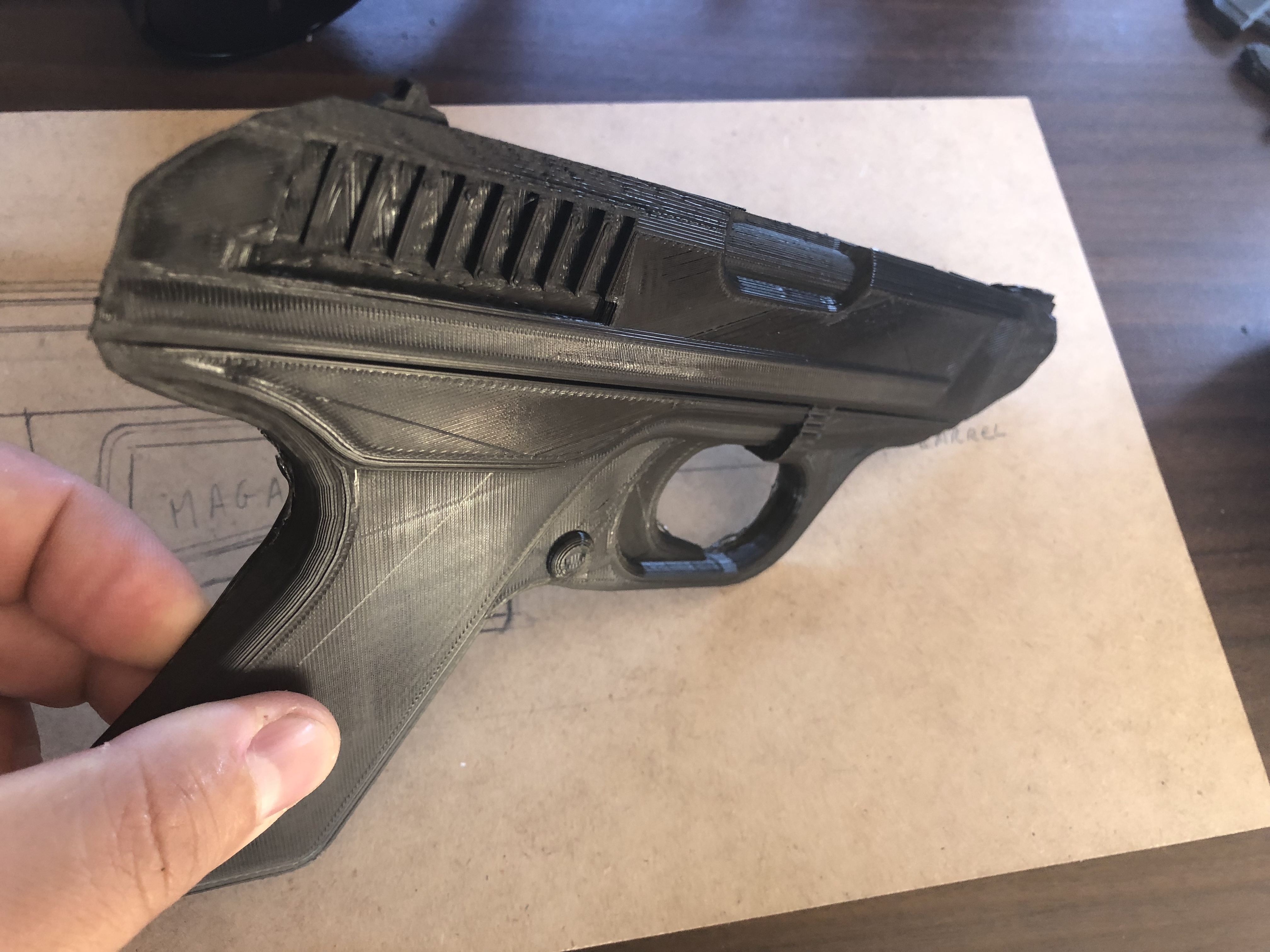 Obviously this will require a lot of cleaning up.
Most likely a bit of putty and perhaps some small MDF board pieces to strengthen it too.
I will be slicing the slide off with a rotary tool shortly...

RPF PREMIUM MEMBER
Not bad! Are you building the stock as well?

thanks Sundowner - Yes I will be building the stock and eventually adding all of the functions etc. possibly to go with something other than the sometimes available airsoft version.

I redesigned the print file to accommodate the two halves reprinted vertically. 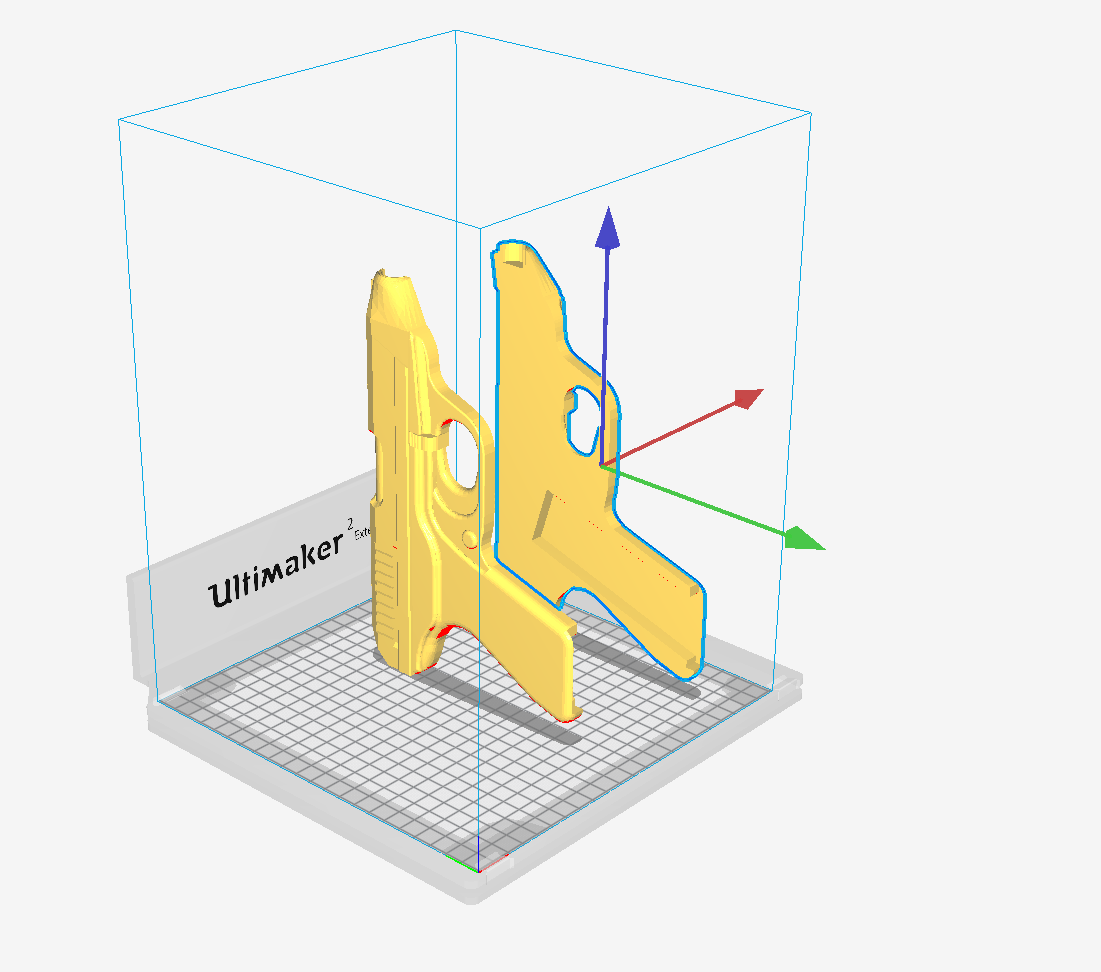 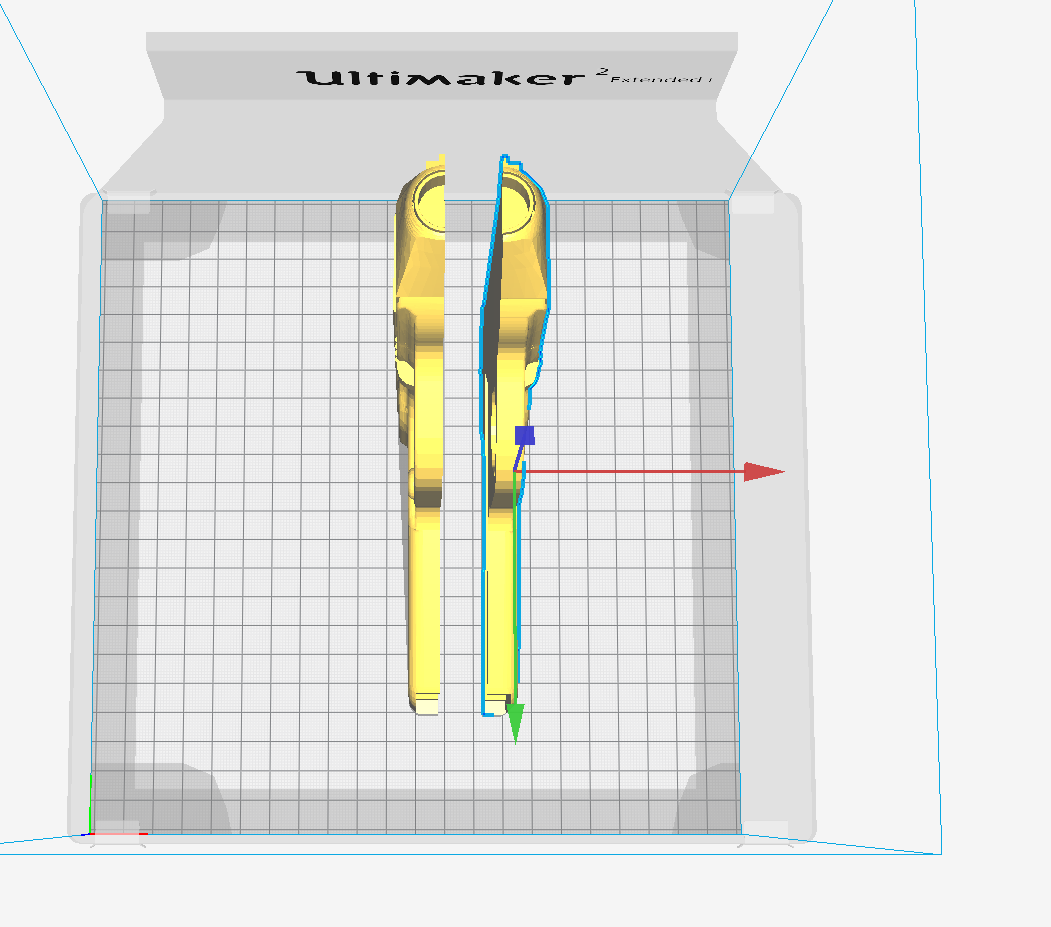 The results of the vertical print. 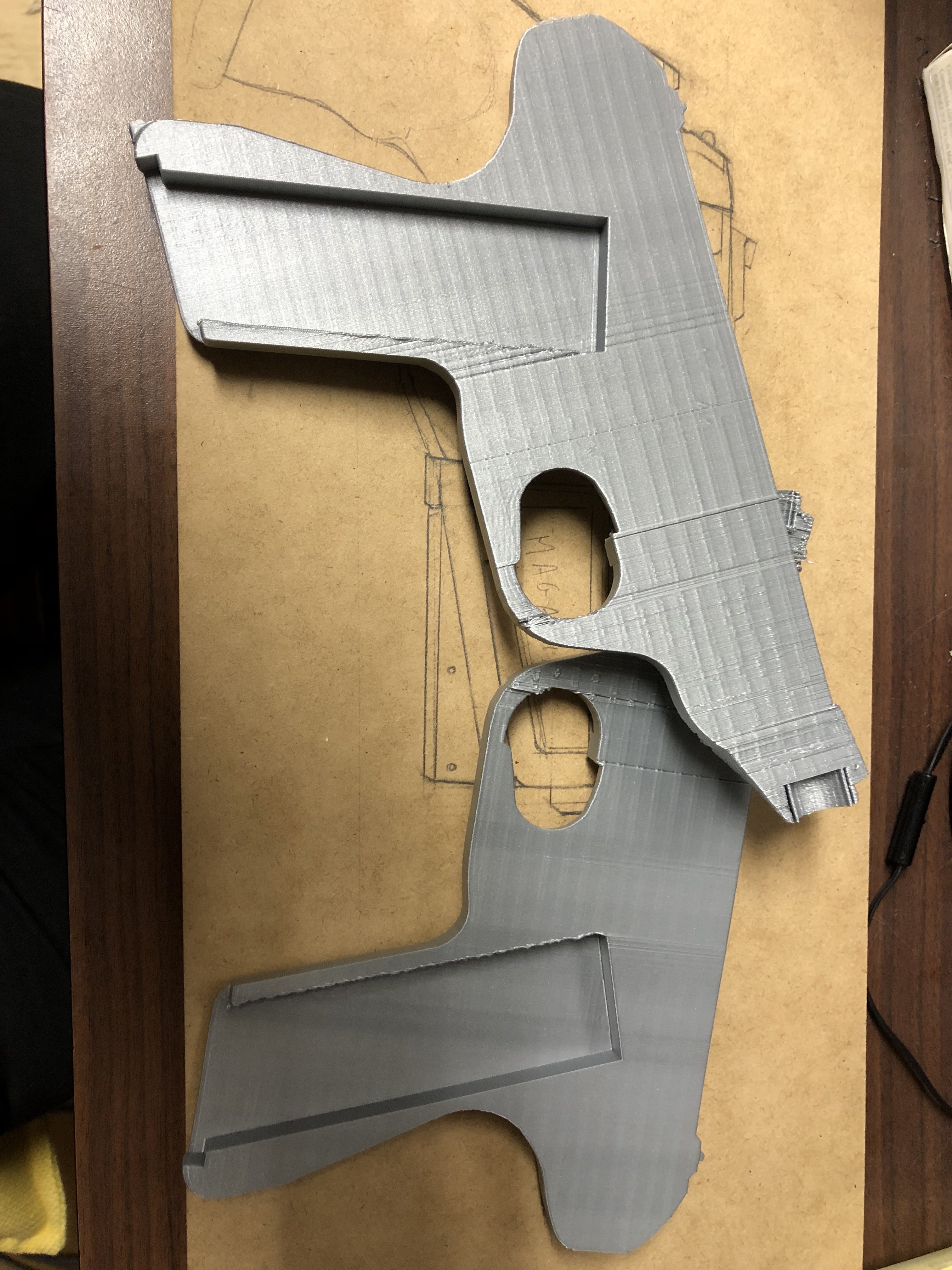 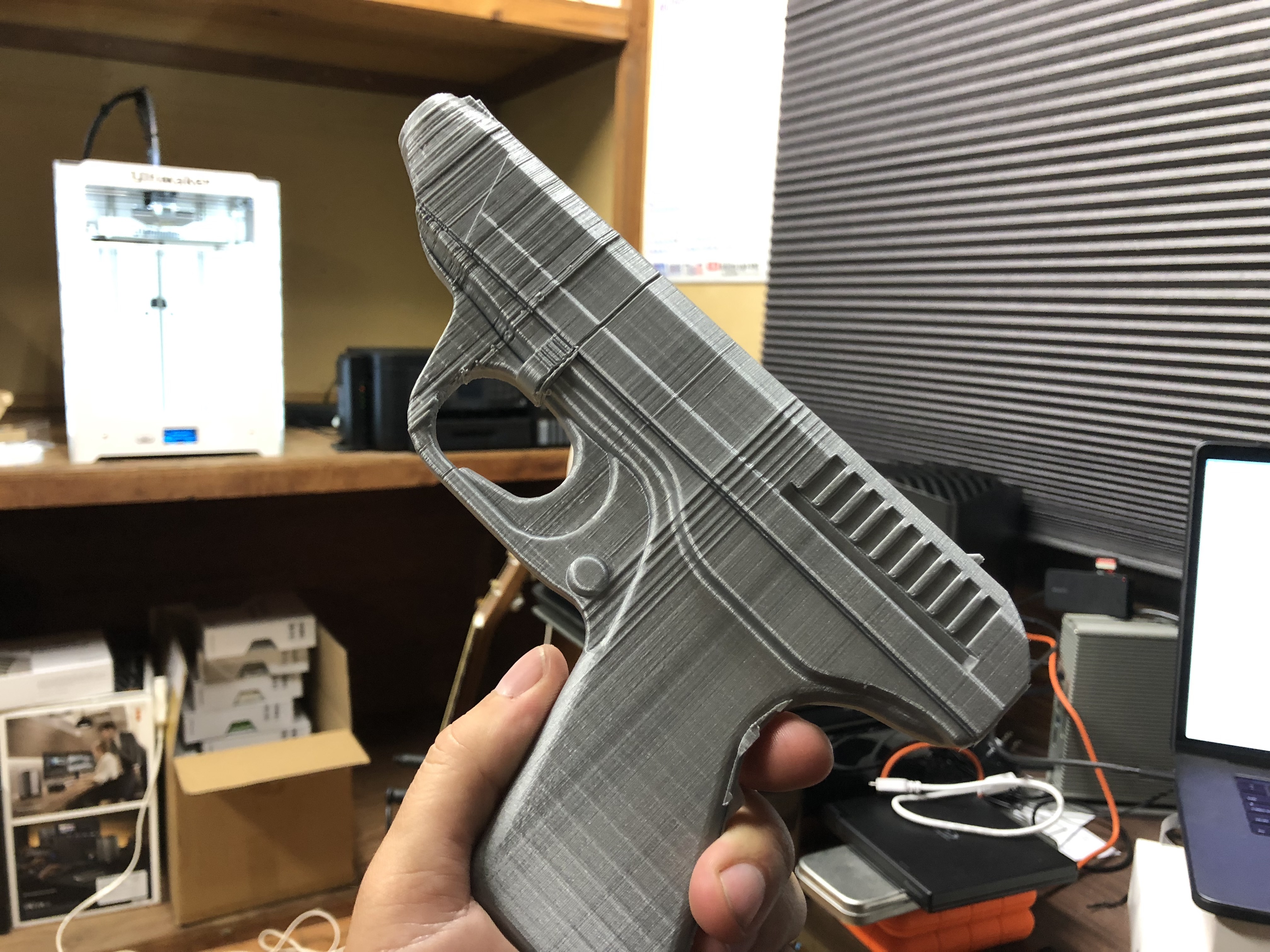 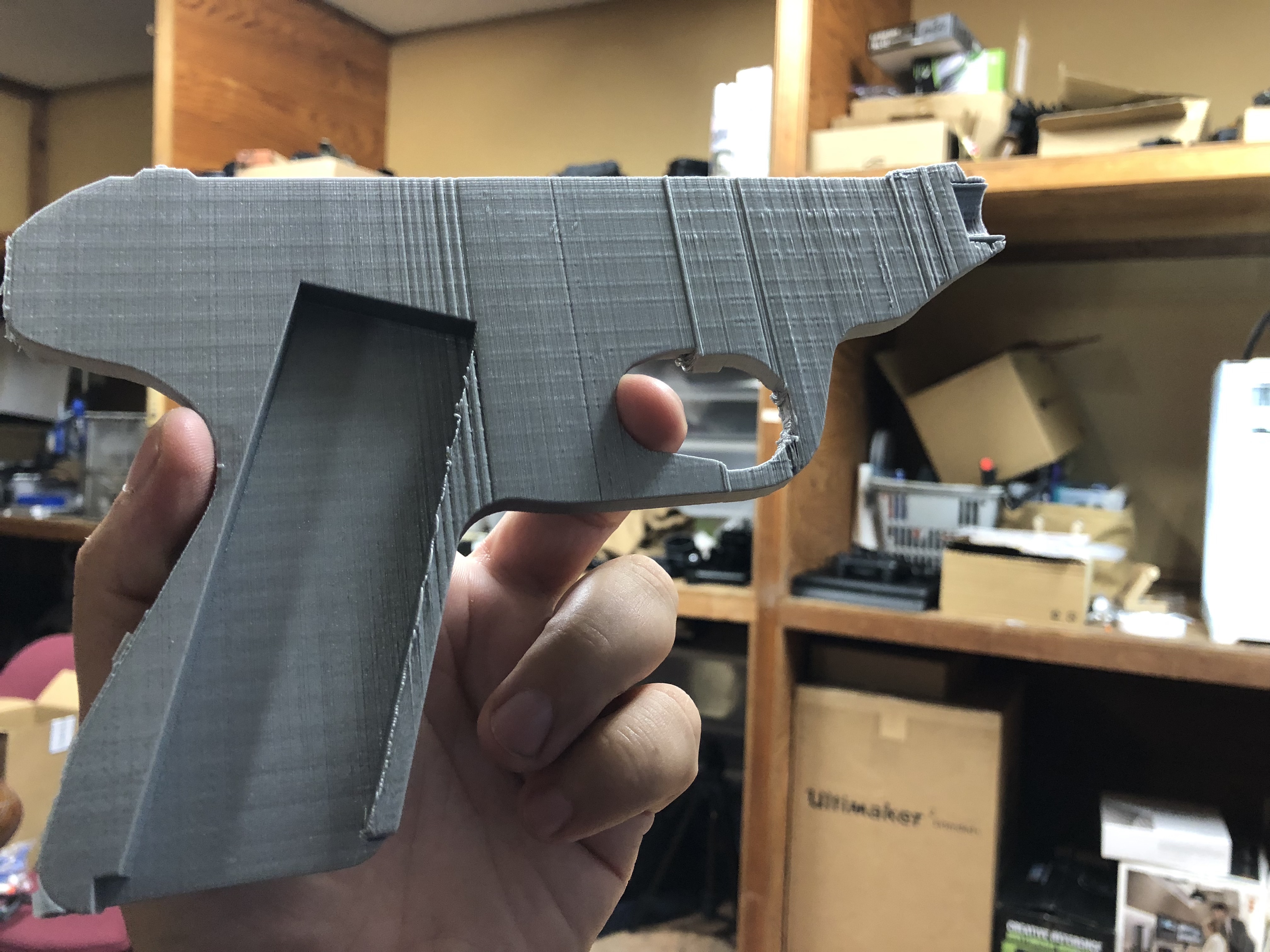 As the shoot is a three part mini-series, the production team decided that they would save the VP70 for a different episode and we are going to go with an FN-57 ('Punisher' in the game) as the main pistol for part one.
A comparison to the game is above with another shot of the test footage added for those interested.
The first part will be released in several weeks and a link will be provided for anyone that wants to view it. 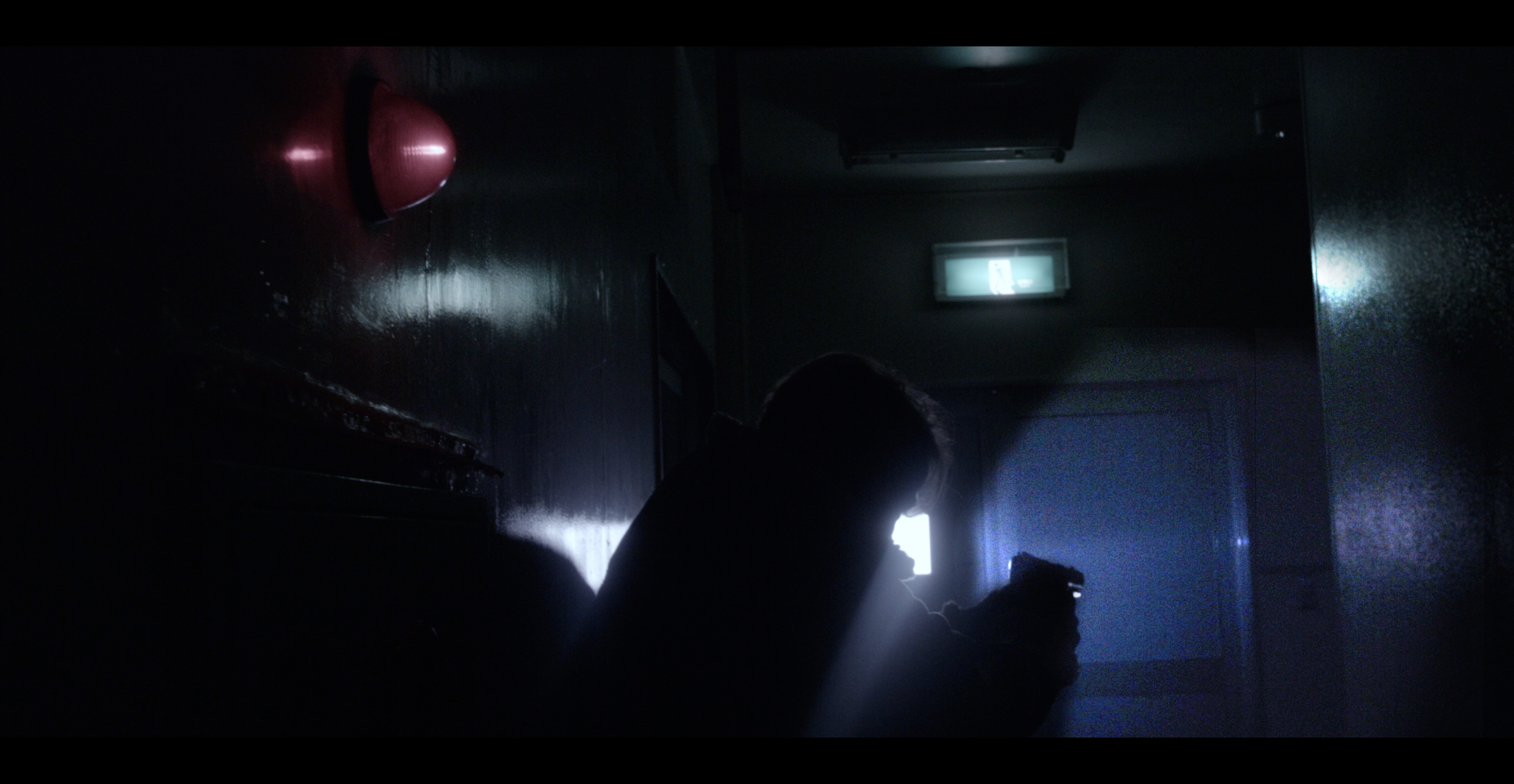 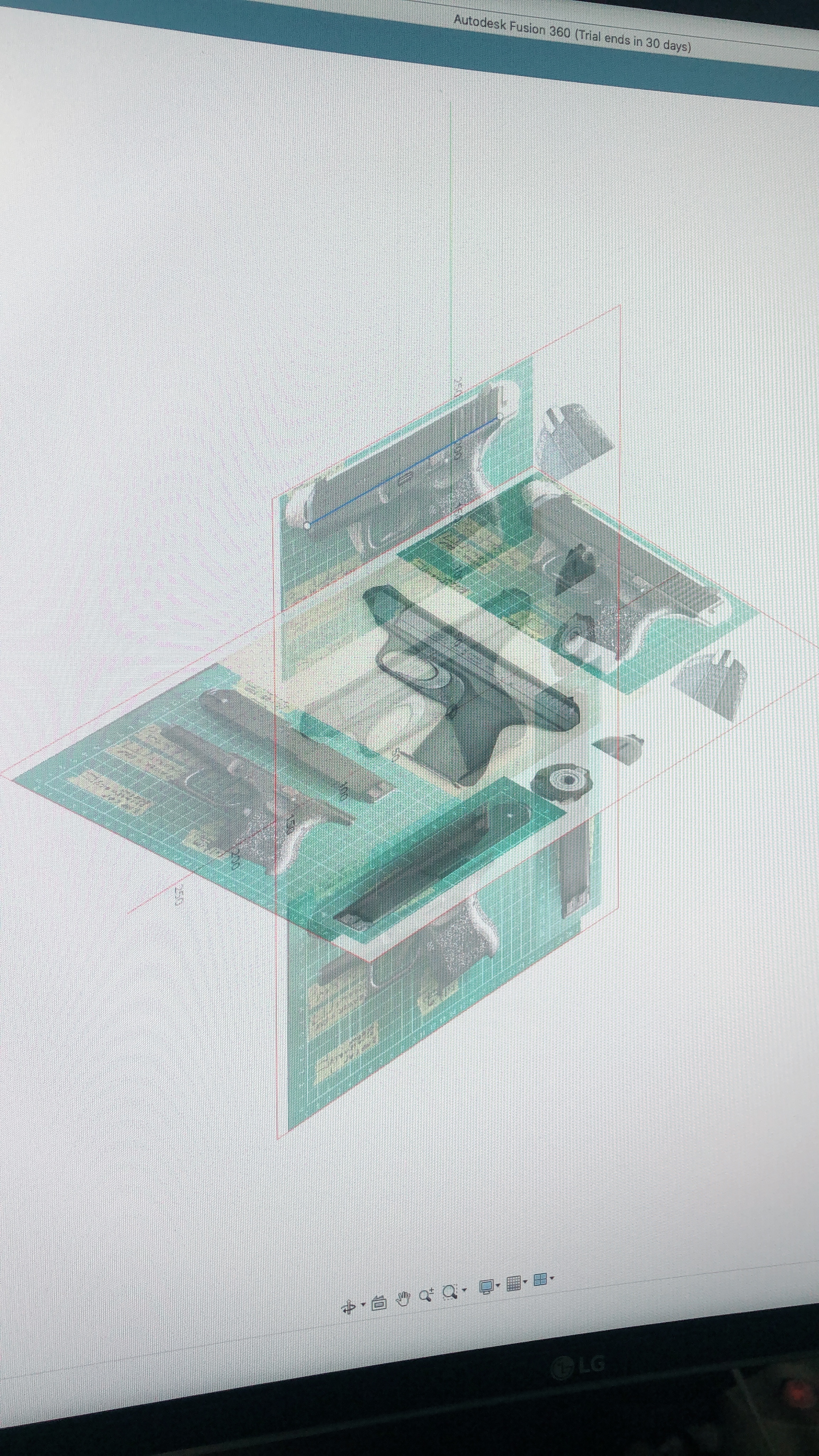 So... this 'two day build' turned out to be another longer term thing, but has not been forgotten by any means.

Below is an example of progress with the 'clamshell' slide (which we eventually settled on a Glock 26 as the donor gun for).
It will be slightly dimensionally altered, as no pistol that I have tried in my collection (which is substantial) fits inside the HK VP70's profile, but will be as true to the original design as possible.
Also, the need for a pistol without a grip or slide/frame mounted safety eliminated many choices too and the full size Glock 17/18/37 mags (that fit the 26) are readily available and I have a ton of them in both the real and airsoft variations.

Nightmare on Elm Street set for 2021

Today at 9:34 AM
Moviefreak