A while ago I bought a 3D printer (a Printrbot Simple, to be exact), and have spent the last year or so modifying it and getting to grips with the whole process of printing and processing parts. Now that I have, I decided to have a go at making a prop that is entirely 3D printed.

A lot of people have said that having a machine make the thing for you is cheating, and I agree to an extent. It is obviously much quicker and less skill-based to have a machine do all the dirty work, but I'd argue that the real skill in making a decent prop lies in the aesthetic side of things: even a beautifully made prop is going to look rubbish if it's got a bad paint job. Besides that, I'm quite tightly constrained by time, space and equipment at the moment, so 3D printing entire props or large parts thereof means I still get to make stuff, which is always nice.

That essay out the way, here she is: a 3D printed rendition of the iconic Colt M1911 service pistol.

My printer uses PLA filament, and printing all the necessary pieces took a really long time...probably between 20 and 30 hours of printing all told. Once that was done, I had to sand the ever-living hell out of them to get rid of the layered effect that FDM printers leave on the pieces they produce. That done, everything was given a few coats of high-build filler-primer, then painted flat black. An old sock and some silver Rub 'n' Buff were used to distress and age it, then a couple of coats of clear gloss lacquer to seal everything in. Then, assembly.

The whole build was probably about 40-50 hours including printing time, and most of the rest of that time was sanding out the layers. The aging technique I used was a new one for me, and I'm really really happy with how it came out. Even though I know it's plastic, it still looks like a solid metal handgun.

The model I used is actually a half-working model: the slide moves, the barrel drops to receive rounds and the magazine should feed properly. However, it was intended to be put together straight after printing, and in fact when I did a test fit of all the parts before painting, it worked really well. Sadly, the tolerances were too tight to all for the layers of paint, so I figured I'd just glue it all in place rather than have something that half worked. I had to do a little hunting for the files for the chequered grips, but they were well worth the trouble. I also decided that I liked the 'extended magazine' idea...I know it's not strictly canon, but I think it looks pretty sweet.

I like it!:thumbsup but not the extended magazine, given time could a functioning pistol be made? not a firing one of course. just all the parts working .
G

Thanks! Well, I could alter the model to allow for the paint so everything would still move, but even then a working replica would be quite difficult. Some of the parts in an actual 1911 are very thin (for example, the armature that goes around the magazine to release the hammer), and plastic probably wouldn't be up to the task. It's possible that a pistol with moving parts could be made, but in order to fit the trigger mechanism in you'd probably have to have a fake magazine that wouldn't slide out.

Short answer: sort of, but not really. But I'm glad you like it!

Pretty nice for a prop..I have a few of the real ones myself....

Thank you both! Lord, that's a pretty sweet mask you've got there...might give making that a shot...

I'm jealous, laser. Here in the UK getting the real deal is considerably more difficult unfortunately. I was looking at getting a set of 'proper' M1911 grips, but I wasn't sure they'd fit my piece, so I had to print my own. The wooden grips look so damn good.

GasMaskSaxon said:
Thank you both! Lord, that's a pretty sweet mask you've got there...might give making that a shot...

I'm jealous, laser. Here in the UK getting the real deal is considerably more difficult unfortunately. I was looking at getting a set of 'proper' M1911 grips, but I wasn't sure they'd fit my piece, so I had to print my own. The wooden grips look so damn good.
Click to expand...

Just a heads up on the grip situation, sometimes you can orient grip prints and modify your settings to simulate a bit of wood grain texture. It of course feels different, but follow it with a little XTC by Smooth-on and you get a nice rendition. The only example I could think of here is from Rgriesbeck's Samaritan print: 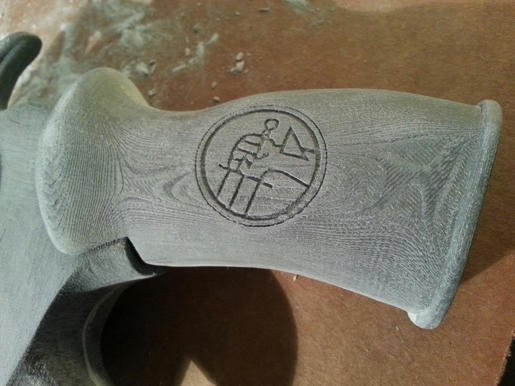 Looks like that stuff might be worth a look, getting prints really smooth without a vapour chamber is a real pain in the arse. Thanks for the heads up on the woodgrain thing too, I'll do a few tests and see what works!